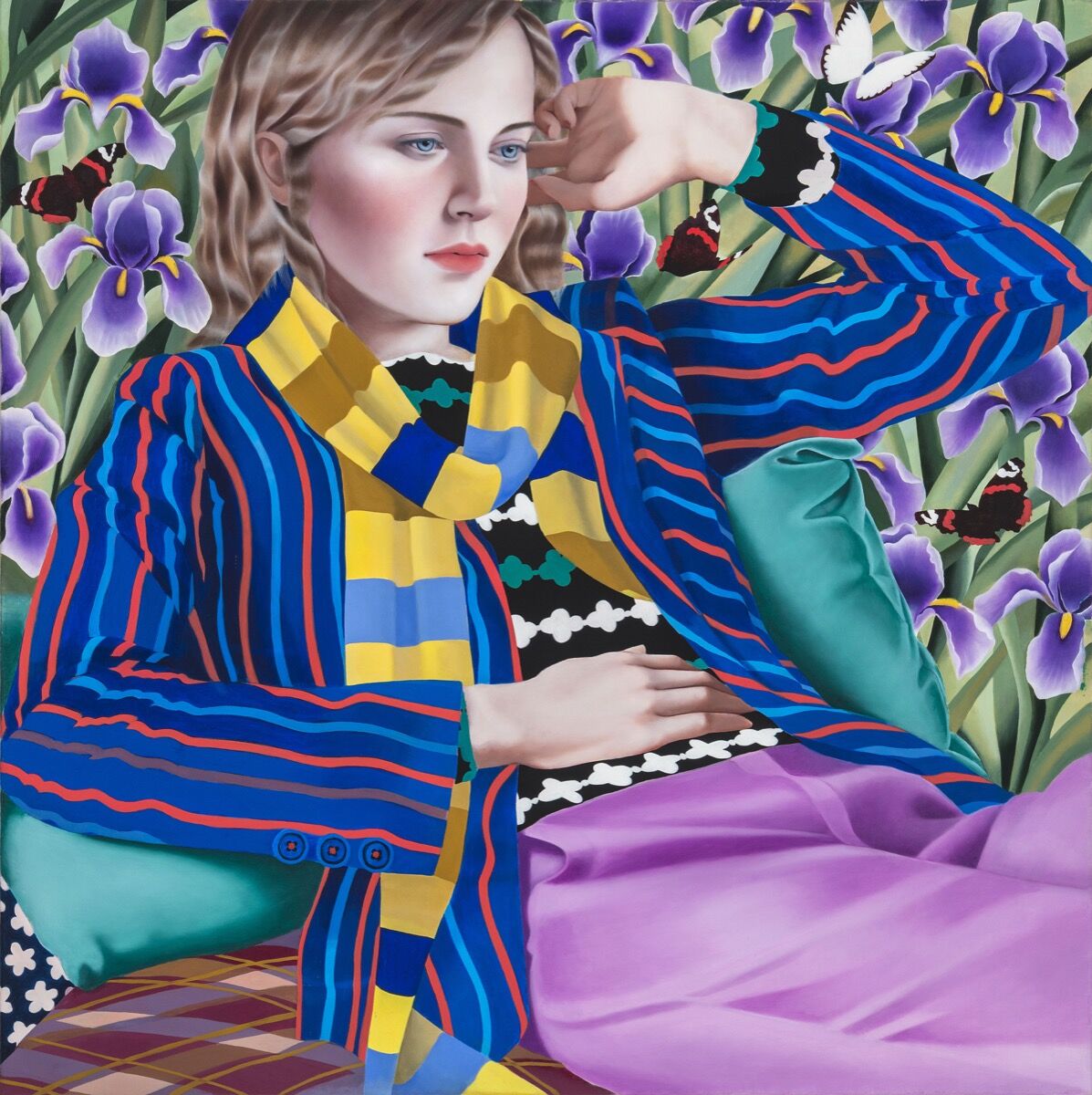 When is a pattern as interesting as a person? What happens when a portrait’s subject is overwhelmed by the vibrant stripes of a blazer, or the droopy purple heads of lilies? Such questions are unavoidable when looking at
Jocelyn Hobbie
’s paintings, the most recent of which are on view at Fredericks & Freiser in New York through December 22nd. In these canvases, women perch, lounge, and gaze, their expressions neutral—a marked counterpoint to the frantic business of the backgrounds filled with flowers and ornate details of textiles. Each painting becomes an exercise in exuberant power-clashing. How much is too much? How much can the eye take?
I met up with Hobbie at her home studio in Carroll Gardens, Brooklyn, where she paints accompanied by a 10-year-old Jack Russell Terrier named Pablo. Outside, it was a cold and torrentially rainy day; inside, the heat was blasting, and a wall of pattern studies and sketches on tracing paper gave off its own, almost palpable warmth. Hobbie uses these so-called “doodles” as she works on a painting—auditioning a particular cluster of dots or colorful zigzags, seeing what’s a fit and what isn’t. The goal, she said, is to achieve a “disjointed, harmonious thing, simultaneously.” 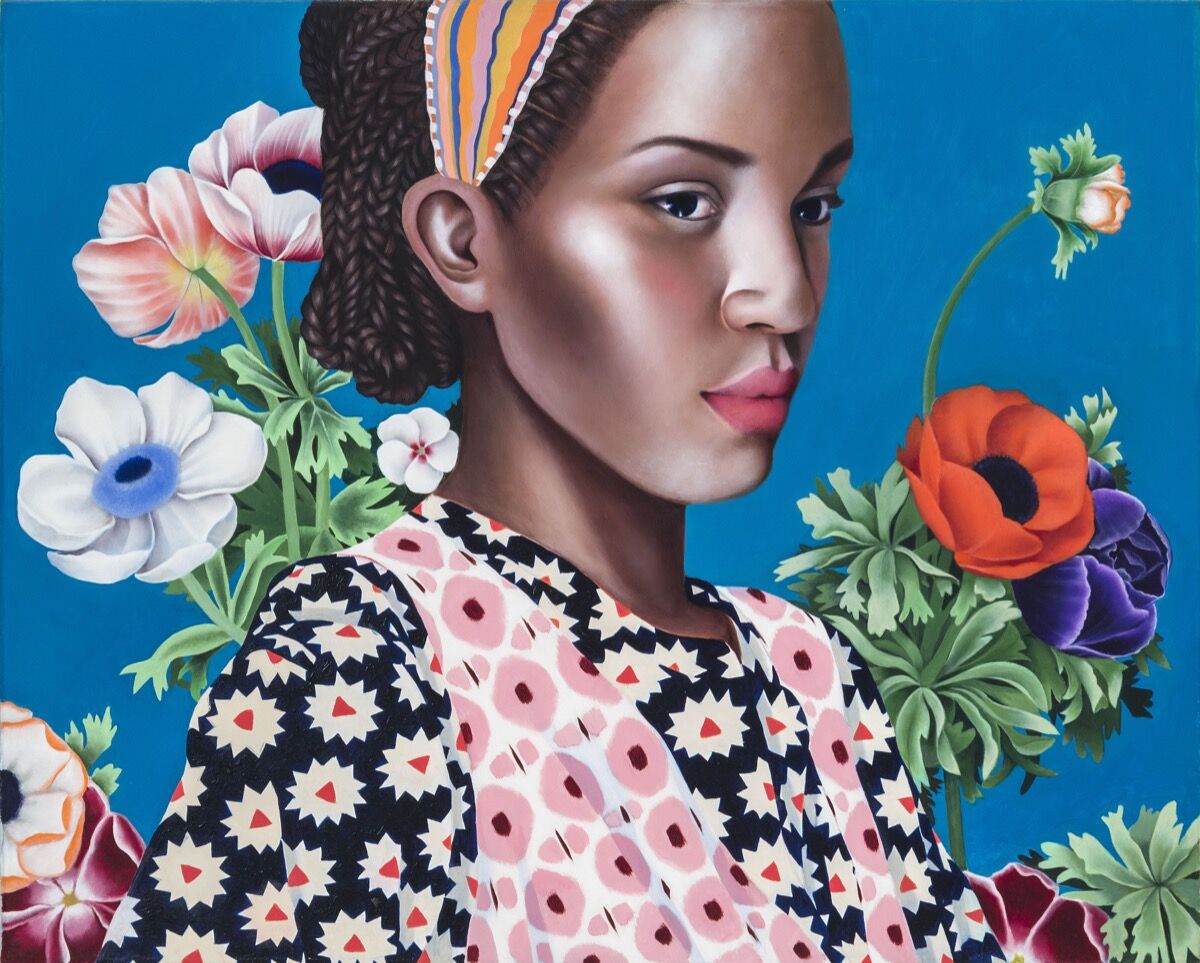 That tricky sweet spot isn’t easy to achieve. “The figure is kind of the foundation of the picture, the architecture,” she explained, “but then what I really get into is figuring out the patterns and the colors, and what’s going to go where. It’s all very much a discovery.” 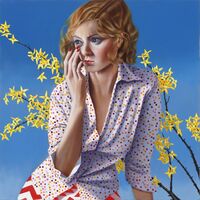 4 Images
View Slideshow
Advertisement
An in-progress painting gave a glimpse into how Hobbie operates, move by move, in the studio. The human component of the portrait is pretty firmly defined: A young blonde woman, running one hand through her hair, gazes out into the middle distance. She wears a light, striped dress, tied at the waist with a sash.
But the background—not to mention the final patterning of the clothing—is still up in the air. A square of tracing paper tacked to the upper edge of the canvas offers one option—a pink-and-orange assortment of interlocking fronds—while an alternative motif waits nearby, a jumble of falling leaf shapes against a block of green. “I’m still figuring it out,” Hobbie cautioned. “This will go through layers, and layers, and layers. I do a lot of sanding down and starting over.” 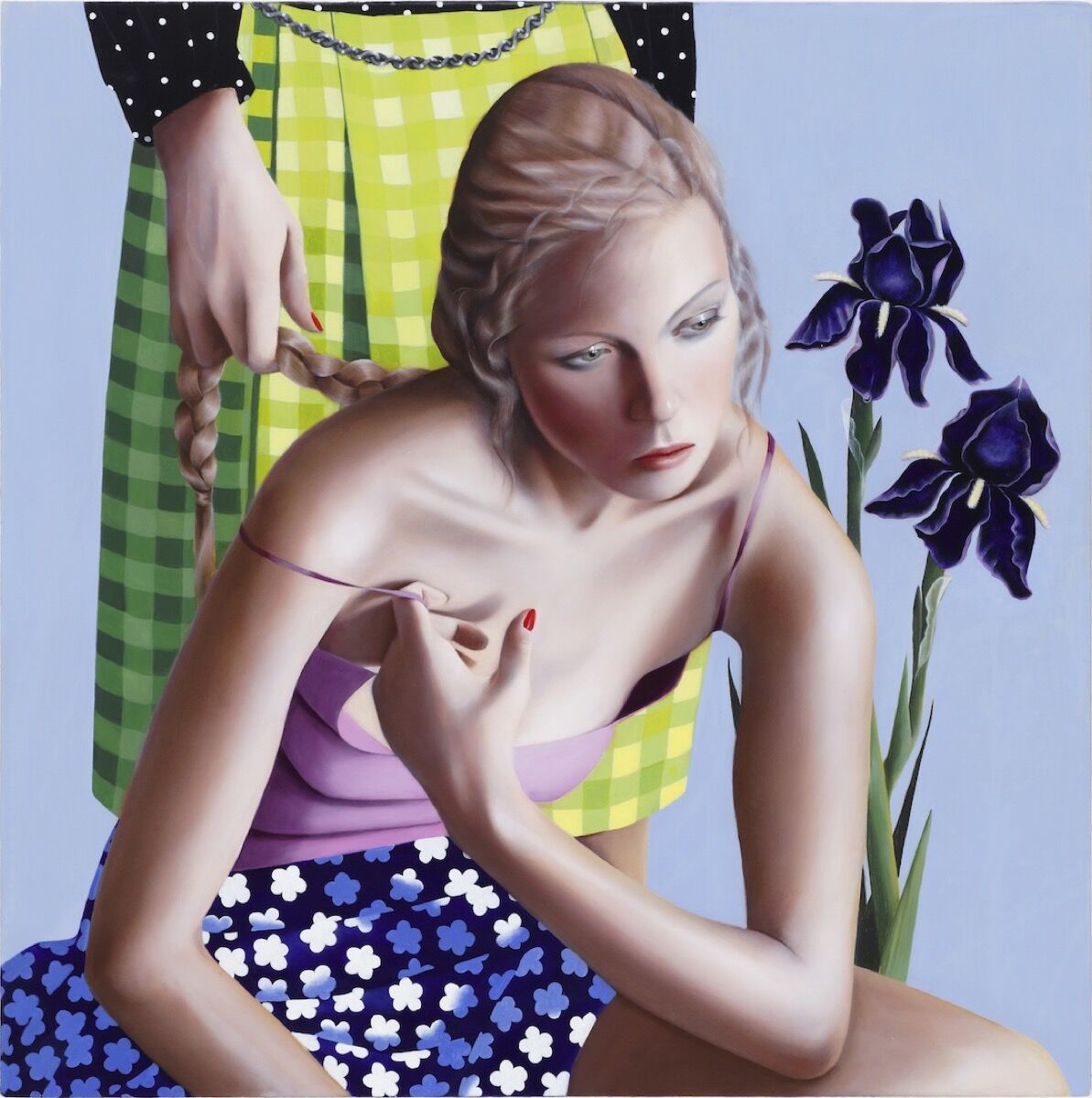 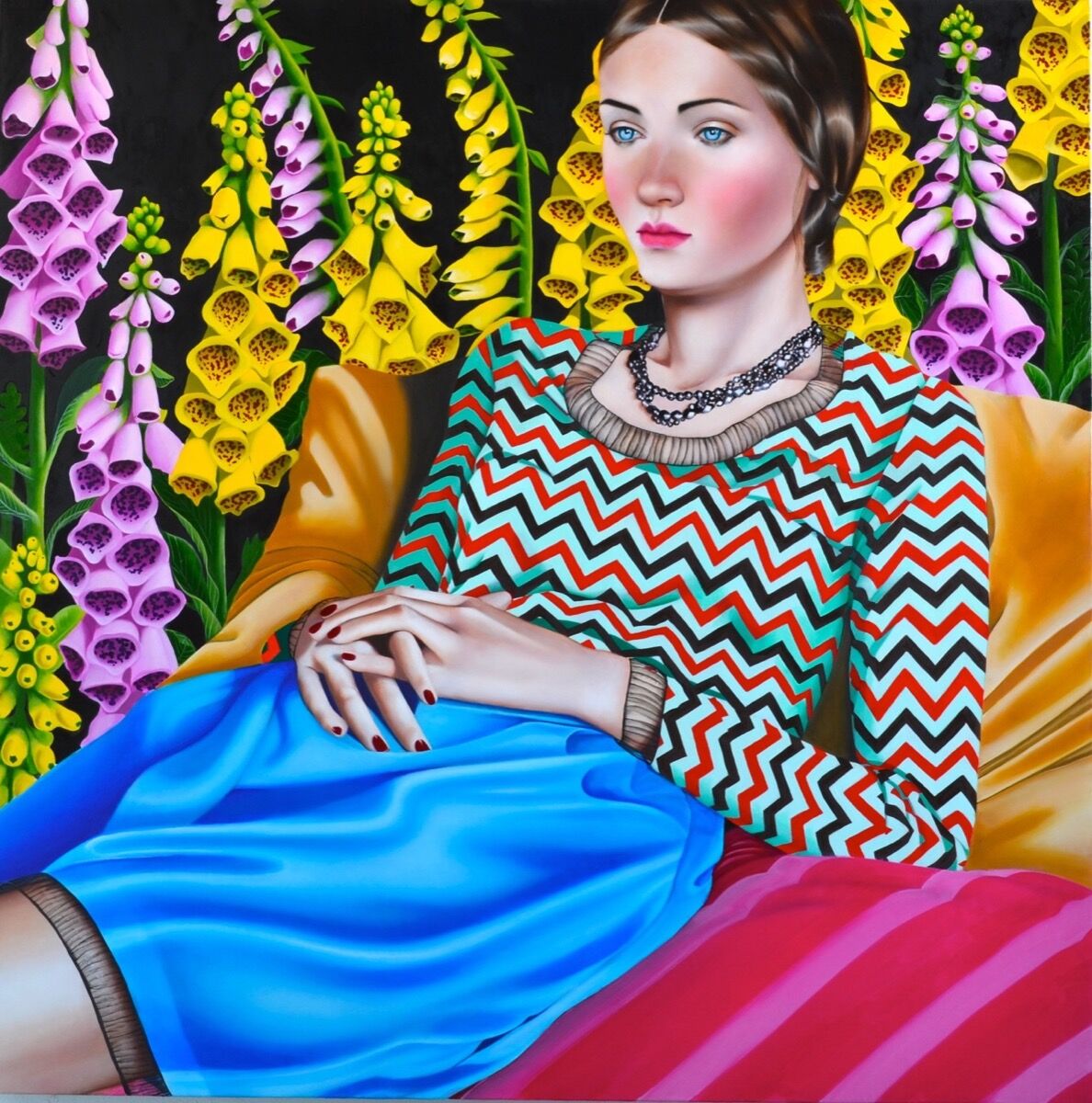 The patterns Hobbie incorporates into her paintings come from a wild array of sources—the internet, of course, is an inexhaustible library—but she’ll often adapt or modify them. “I love plaid, I love gingham,” she said. “Recently, I’ve been looking at a lot of textiles. Portuguese tiles.
Matisse
’s cut-outs. You know, times are tough—I feel like I need something cheerful.”
If the patterns are cheerful, her figures often are not. Surrounded by such explosive hues, they’re stoic, unperturbed. In almost all cases, the subjects aren’t real people, but rather subtle combinations of faces the artist has seen—in real life or otherwise—“Frankensteined together,” as she put it. Sometimes, she’ll take photographic self-portraits to work out a particular pose or angle of the body, but Hobbie never has a subject sit for her in the studio. The typical Hobbie heroine looks a bit timeless, almost airbrushed, with intricate plaits of hair and enviably flawless skin. “I’m not a realist painter,” she said, simply. “I just think of them as made of paint.” 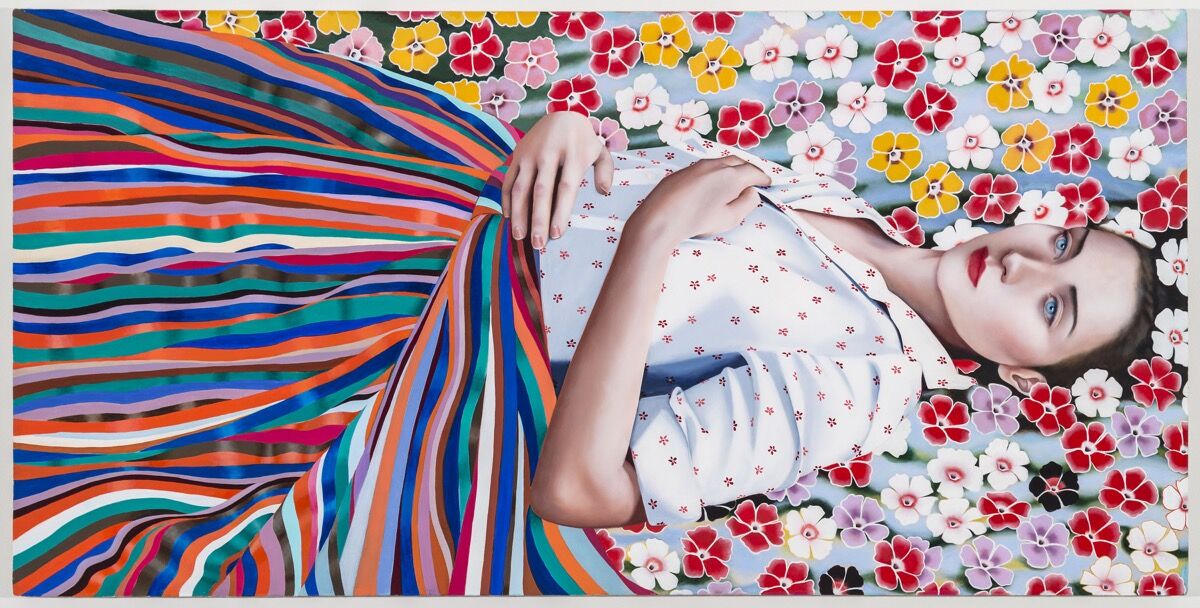 Over the years, Hobbie’s style has evolved from early days spent painting in an almost miniature scale to a later body of work that includes multiple subjects and more loaded scenarios. In 2012’s Infant, for instance, we see a young woman—pensive, chewing her thumb—not paying much attention to a nude baby sprawled out on a blanket before her. Another woman cranes over the first’s shoulder, shooting the child an almost vicious glance. It’s a complex picture, and one meant to solicit questions (Whose baby is this? Why does no one seem very happy that it’s there?). In another painting from the same year, entitled Cocktail Party, a grandma with purple-tinted hair holds a different newborn, as well as a rocks glass, as an unknown person’s exposed breast looms over her shoulder.
Hobbie has excised this thread of enigmatic storytelling from her more recent work. Now, we see mostly single figures, their histories unreadable, their bodies hedged in by evermore wild, conflicted patterning. It’s not hard to imagine a stage in which the subject disappears entirely, or is reduced to a single gesture or limb—a pale arm flung out on a wild blanket in a field of flowers.
“Do you feel like they’re too cacophonous?” Hobbie asked before I left. “Do you feel like you’re looking for a break?”
The answers, happily, are “no” and “no.” There’s a simple delight in this artist’s anti-minimalism. Hobbie’s disjointed, harmonious thing is pure pleasure.
Scott Indrisek
Related Stories

Alex Katz on 10 Artists Who Inspire Him 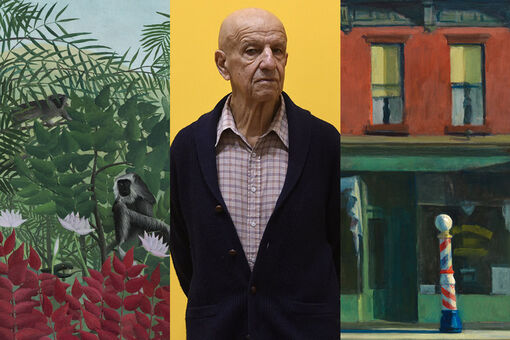