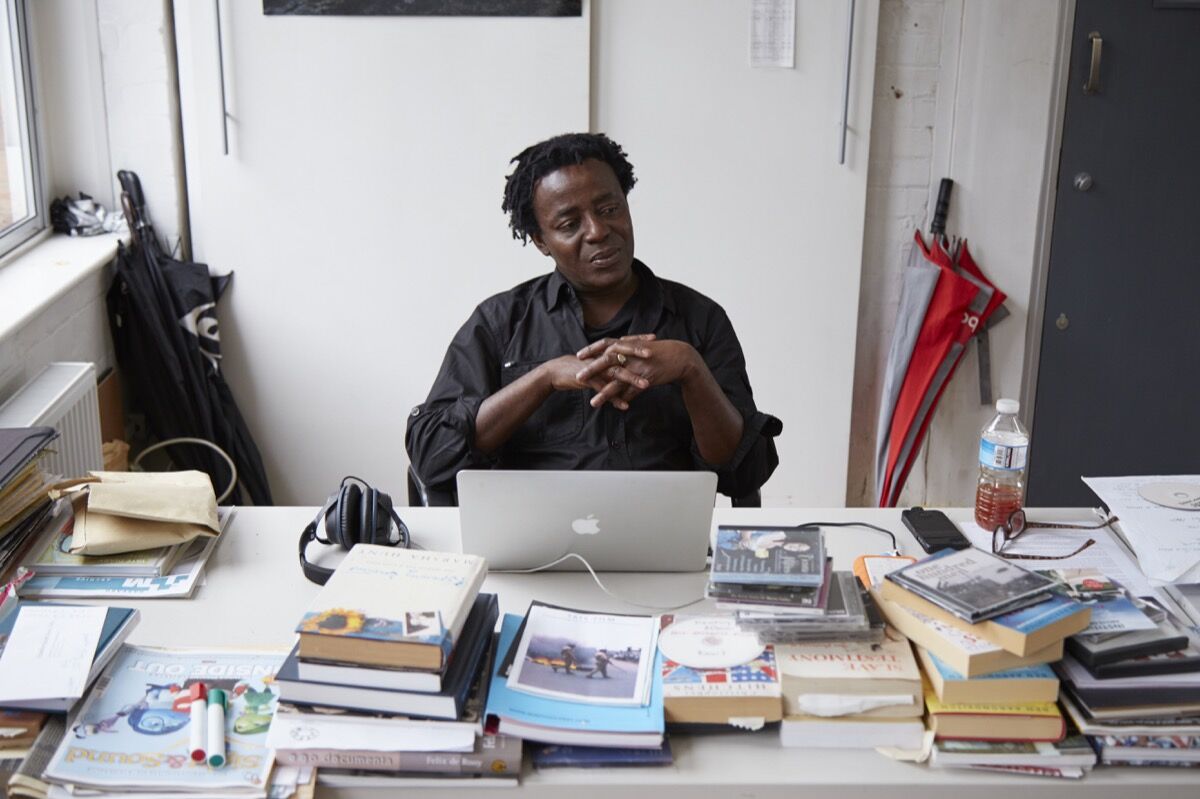 On June 21st, two days before Britons went to the polls to decide on Brexit, Ghana-born, British artist
John Akomfrah
, OBE, was in Manhattan installing two video works for his new solo exhibition at Lisson Gallery. We met in a cavernous back room of the gallery, where our voices echoed slightly off the walls. “Brexit is one of those reminders for people like me that one can’t afford to be too Hegelian about questions of white supremacy and racial privilege,” he said, when asked. “You can’t afford to think there’s some curve that’s endlessly leading to a state of affection, because just when we think that, what disappears is a certain kind of vigilance. It serves to remind you also of the perils of assuming that narratives die.”
This idea lies at the heart of Akomfrah’s work—that stories live on, embedded within human memories, places, records, and fictions. The stubborn fictions underlying the U.K.’s movement to leave Europe are those espoused by the country’s far-right nationalist party, UKIP, which holds that migrants arriving in the country are curtailing the prosperity and freedoms of native Britons. “It’s like listening to an argument amongst drunks,” Akomfrah says. “It feels like such a backward conversation, but you can’t ignore it.”
Akomfrah has probed ideas of migration and postcolonialism for some 35 years through the numerous feature-length films, documentaries, and video installations that he has brought to life over his career. He was a founding member of the Black Audio Film Collective in 1982, which garnered attention for the extraordinary Handsworth Songs (1986), a documentary that burrows deep into the U.K. race riots of 1985. It’s a haunting blend of newsreel and still imagery, overlaid with manipulated sound. 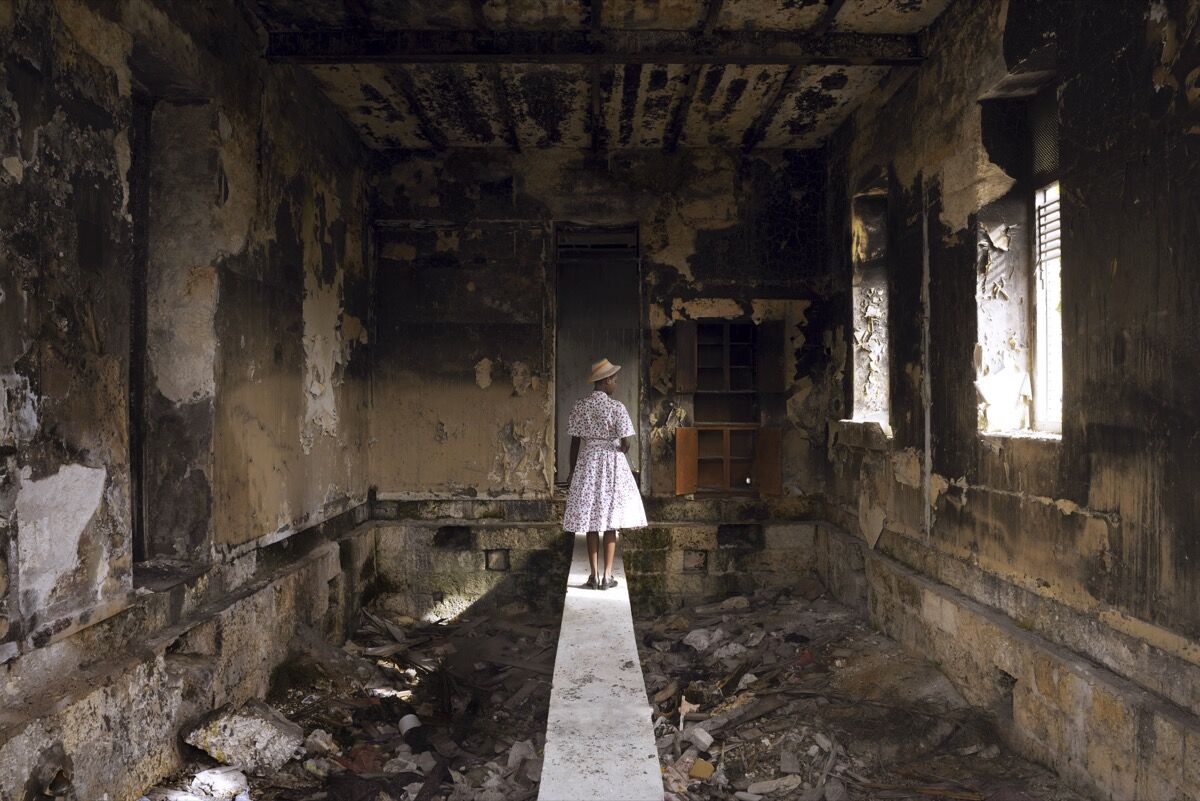 Akomfrah has always operated at the nebulous borderland between document and artifice. But “artifice” isn’t quite the word for it. The imaginative work he engages in strives toward a conversation with viewers about the way we experience history—a truth about human memory. “As time has gone on,” he says, “it has become clear to me that the distinction between what is ‘archival’—or the elsewhere—and what constitutes an original image becomes blurred, in the sense that every time I bring a camera out I’m always aware of the unseen guests that are there, whether it’s other filmmakers, artists, or narratives. You’re aware that there’s a historical bleed into what you’re constructing.”
In Vertigo Sea (2015), Akomfrah harnessed this bleed through a combination of archival footage of the slave trade, the whaling industry, and migrant crossings at sea; references to literature such as Melville’s Moby Dick; and stagings of migrants in period dress gazing out at the ocean, or a child’s pram washed up on a rocky coast—all interspersed with moving images of tempestuous, sublime seas and played out across three screens. (The film debuted last year in Okwui Enwezor’s exhibition “All The World’s Futures” at the 56th Venice Biennale.) It’s a sort of visual symphony in which the ocean is imagined as a repository for human history, a moral witness that receives stories and acts upon them. 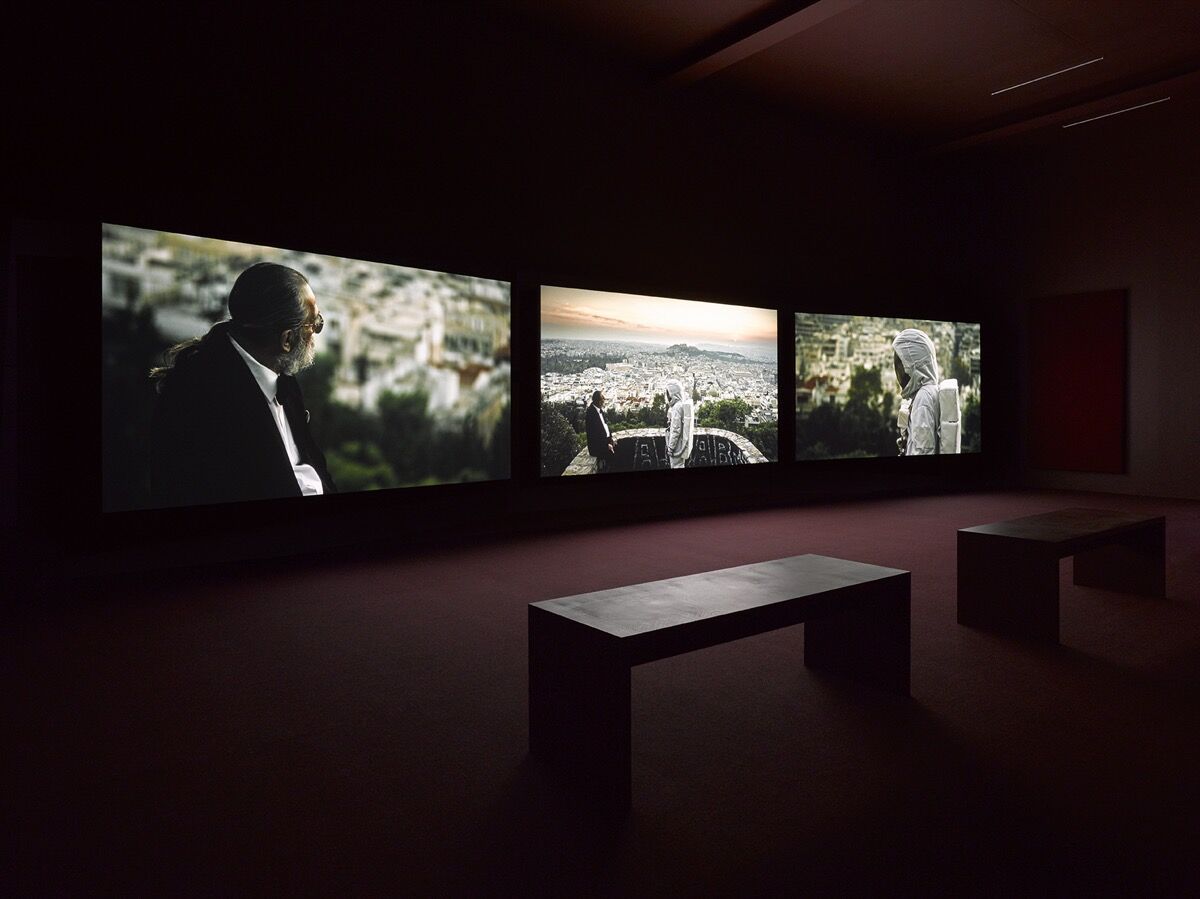 Advertisement
With his two new films at Lisson, Akomfrah has further embraced the subjectivity of history, moving away from archival material completely. The Airport (2016) and Auto Da Fé (2016) are composed entirely of his own footage. He stresses, though, that these draw from different kinds of archives—those absorbed by places. “I’m fascinated by different kinds of records,” he says, “the ways in which landscapes or locations also retain their own kinds of memory, or their own vestiges of lives. In those instances, the question is: What siren songs can I hear? Can you trust the gestalt of place enough to say, okay, I hear you, now talk to me.” This is why, when Akomfrah was drawn to Greece during last year’s economic crisis (and as migrants poured into the country from the Middle East), he decided to shoot in the abandoned Athens airport, Ellinikon. “I wanted to do something on involuntary memory, in the way Proust describes it, where one thing—emergency or debt—sparks off a chain of associations.”
The resulting work, The Airport, on view at Lisson Gallery, is a gorgeous and surreal meditation on time and space. A gorilla, an astronaut, and various other human characters pass time in waiting rooms, converse, gaze out the airport’s panoramic windows, or sit in disembodied airplane chairs on an empty runway. “It was very much a conversation with that space, and the desire to see how the airport can both be a fiction as well as a literal place,” says Akomfrah. “The sense that there’s a place that you can go where you’re free from the shackles of history. The airport can stand for that because it’s a kind of embodiment of national—maybe even personal—ambition. The space where flight, or dreams, or betterment, can happen.”
Akomfrah invokes two earlier filmmakers, Theo Angelopoulos and Stanley Kubrick, in the piece; the latter’s 2001: A Space Odyssey (1968) is summoned through the gorilla and astronaut. “Kubrick or Angelopoulos are not references now, they’re indications of the temporal,” the artist says. “In a work that is a rumination on lost time, the very fact that you have something in it that makes people remember Kubrick is itself the point. It’s to give people a way of accessing different forms of temporality. 2001 is not just a moment of cinema history, it’s an embodiment of time.” 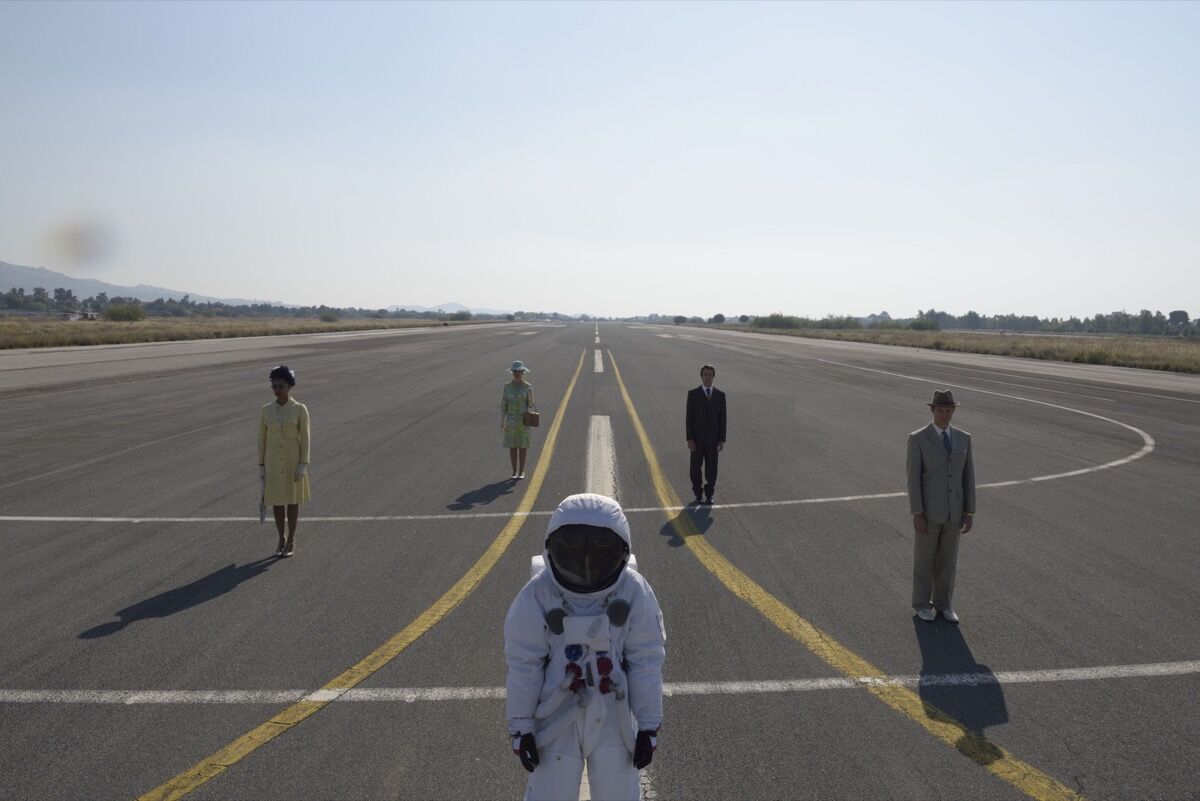 In Auto Da Fé, Akomfrah again calls forth multiple timescapes, tracing—through period dramatizations—the emigrations of eight different peoples that have fled religious persecution throughout history, from the 17th-century migration of Sephardic Jews from Brazil to Barbados, up to today’s exodus from Iraq.
Akomfrah’s films are lavishly beautiful and poetic, but can also be deeply unsettling, recalling chilling narratives that—looking around at the world today—have yet to die. “I want to have a dialogue with single states, single beings,” he says. “The ambition is to reawaken different senses or to reconfigure how one relates to the image, and to have that relationship stand for new forms of reflection.” In effect, Akomfrah’s films are inviting viewers to renegotiate their relationship to history—to listen to the unseen guests that are always in the room.
Tess Thackara
John Akomfrah is on view at Lisson Gallery, New York, Jun. 24–Aug. 12, 2016.
Related Stories