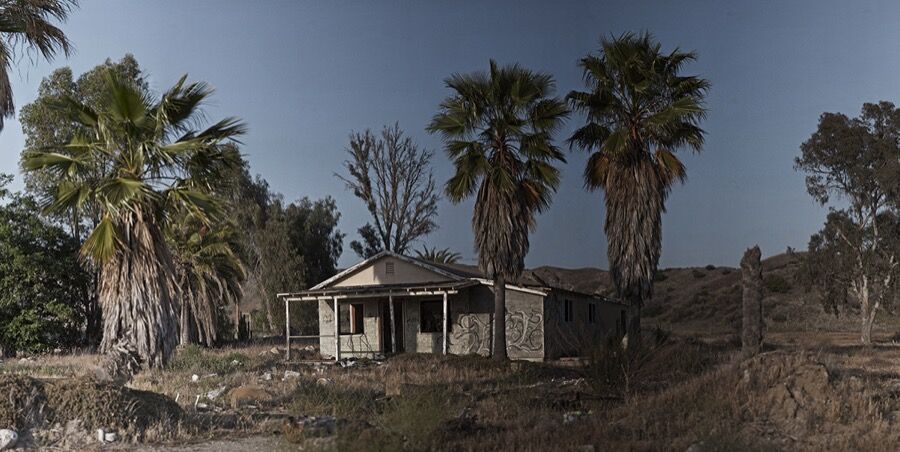 John Divola
has made a habit of waking up before dawn, packing his car with cameras and cans of spray paint, and steering down the wide-open Southern California highways in search of his next subject—often, long-abandoned buildings that most wouldn’t dare to enter, or would risk arrest if they did. The intrepid photographer, now in his late sixties, has been ignoring “do not trespass” signs—and co-opting the spaces beyond them as the backdrops for his strange and alluring photographs—since the 1970s. “I’m interested in abandoned houses because they’re inscribed with this whole physical history of gesture and choice, embedded with the decisions of the original architect, the people who live there, and then those who come in after and break things,” he muses.
We’re standing in the middle of Manhattan gallery Maccarone, looking at an image of a crumbling interior. It’s one of 12 photographs that make up Divola’s most recent completed series, “Theodore Street Project,” whose subject is a derelict house that he discovered in 2007 while cruising down the Moreno Valley Freeway. This particular room is littered with all manner of debris and layered with spray paint—a big blue asterisk, three drippy red dots, and neon cursive scribbles that read “hell.” Unidentified intruders contributed some of the graffiti; other markings were added by Divola himself. “That blue square is mine, but not that orange area,” he explains, his eyes roving across the room’s walls with an easy familiarity. “The line between what I’ve done and what I haven’t done is indistinct, which I like.”

Divola began his painted interventions in the ’70s, as a somewhat frustrated MFA student at UCLA, studying under the great
Robert Heinecken
. He had just completed a series of well-received images that documented glimpses of his suburban Reseda, California, neighborhood: bushes, garage doors, and women watering lawns that he took during early-morning bike rides. “The response was positive, but I was frustrated because everyone wanted to read it as some kind of commentary on the banality of the landscape or the people,” he recalls. “For me, it was the doing of it—the process—that was fundamentally interesting. The fact that I would go out the door, get on my bicycle, move through the landscape, and come back with these imprints. So that totally frustrated me, and I was looking for another way to work, where my actual engagement was an inescapable component of the work.”
Soon after, Divola embarked on “Vandalism,” a series of black-and-white photographs showing clusters of dots, half-moon swoops, and concentric circles that he inserted into the rotting corners of deserted houses (some which he entered illegally) across the greater Los Angeles area. They’ve become some of Divola’s most iconic images, and were the subject of Three Acts, a major tome of the photographer’s early work published by Aperture in 2006. At that point, it had been some years since he actively used abandoned buildings as subjects. 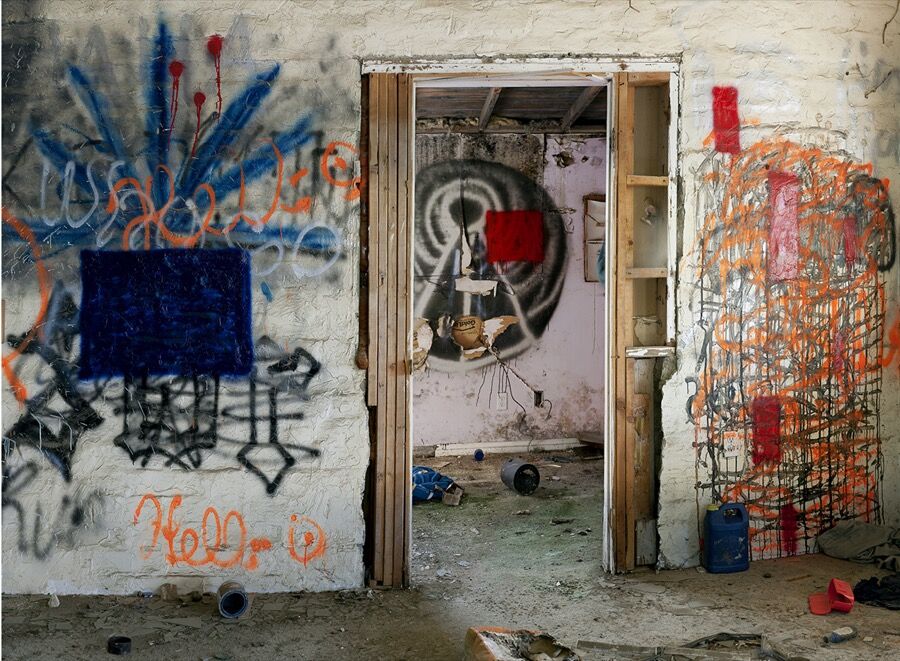 Advertisement
Other series had taken precedence in the ’80s and ’90s. In “Isolated Houses” (1995-1998), he built a taxonomy of countless small, lone homes bordered by miles of unpopulated desert and never-ending skies. In “As Far As I Could Get” (1996-97), he set his camera timer to 10 seconds, hit the button, and ran as fast as he could away from the machine. The resulting black-and-white images show the back of Divola, far in the distance, against wide expanses of desert, highway, and dirt road. They’re indexical images (think
Bernd and Hilla Becher
) that also manifest existential feelings: loneliness, the desire to escape, the excitement of unbridled freedom, the fleeting nature of time.
But when Divola began scanning his ’70s “Vandalism” negatives for the Aperture monograph, an old itch resurfaced. “I had to scan all those negatives, and I became reinterested in—my subconscious became sort of colonized by—working the way I did way back then, in abandoned buildings with spray paint,” he explains. “And in the interim, the technology changed to the point that I could do all kinds of things we couldn’t even fantasize about back in the ’70s.” It wasn’t long after the book was published, in 2006, that Divola happened upon the Theodore Street house, the subject of his current Maccarone show.

He first approached it like he did the structures featured in his ’70s work—painting black circles, this time larger and resembling black holes or portals (he calls them “Dark Stars”), onto the decaying walls. The resulting images, three of which are on view in the gallery, are cropped closely around the painted voids, whose monochromatic surfaces are interrupted only by the glimmering reflections of the windows behind the camera.
Two years later, Divola returned to the house with some newfangled equipment—a GigaPan robotic camera base that rotates and snaps multiple images over a set time, then stitches them together. He found the rooms, and his original interventions, covered in new markings. 12070 Theodore Street had become a site that recorded the passage of time, the thoughts and gestures of those who passed through; much of the graffiti Divola found, inexplicably, was riddled with racist slogans. As he surveyed the changes that the space had undergone, thoughts of his own practice and how it had evolved began to occupy his mind. “I started thinking, here I am, this old guy, going into these old places and skulking around, doing this thing I’ve been doing for 40 years,” he muses, self-deprecatingly. “I got this weird feeling that I was haunting my past practice, becoming this kind of a specter in relationship to it. So I thought, ‘Why not go with that?’” 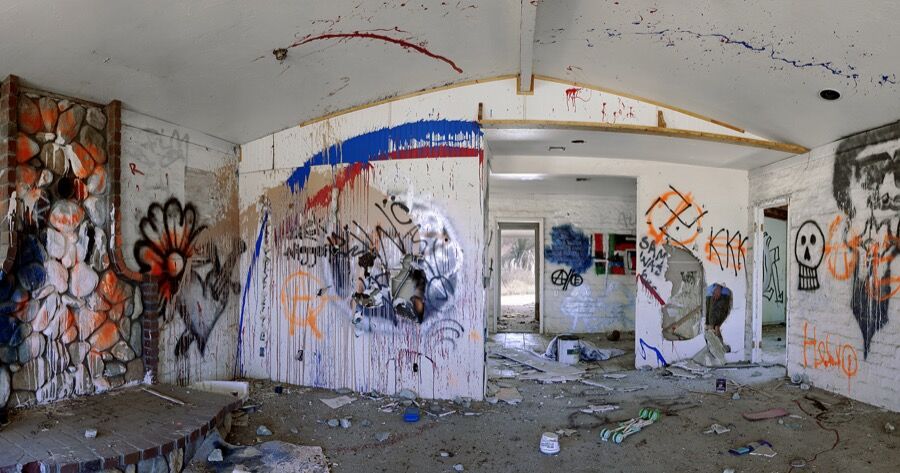 So Divola programmed the GigaPan for a 20-minute exposure, and as it panned slowly across the room, he placed himself within the frame. In five of the wide-angle images on view at Maccarone, slivers of the tall, silver-haired Divola can be discerned. In one, his hand, the bottom of his blue t-shirt, and his green cargo shorts are glimpsed through a hole in the wall. Above the hole, a black swastika is crossed out with neon orange paint, and on the opposite wall, one of Divola’s original black circles is covered in paint spills and perforated with holes, one colonized by a bee hive. It’s a charged environment that tracks the passage of time and moors it in the artist’s most overt intervention yet—the presence of his own body, becoming one with the space.
In another image, Divola turns his camera to the grounds of the house—a mess of dying palms and browning grasses edged by a bright-blue desert sky. If you look hard enough, a fragment of the artist’s black t-shirt and a bit of his silver mane are just discernible from behind a tangle of branches resembling a tumbleweed. There’s a sense of the artist not just interacting with his environment, but melting into it. “It’s hard to see things. The way we look at the world is so edited; we’re just editing machines, essentially,” Divola muses, gazing at the image. “It’s a weird compromise, between what you expect to see and want to see and what’s there. It’s like if you’re a little kid on a white patio with white chairs in the sunlight—the shadows are more visible than the chairs. But all you have to do is hit your knee on a chair one time and you don’t see the shadows anymore, you see the chairs.” 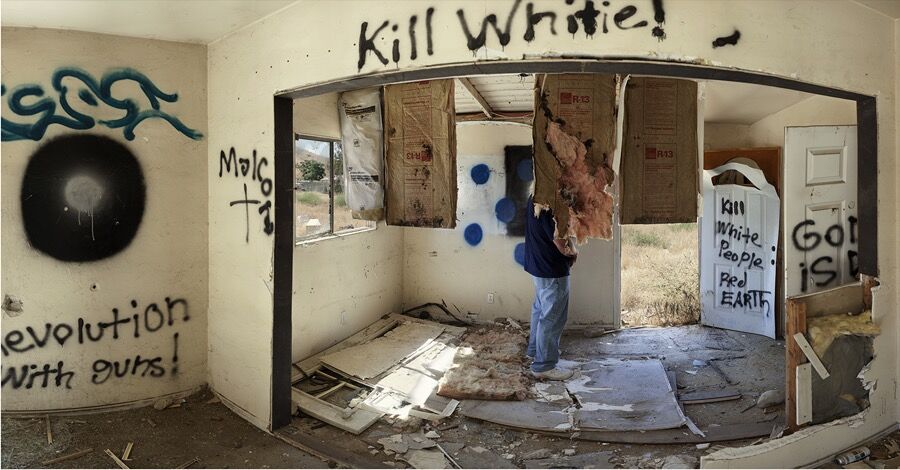 These days, if you plug 12070 Theodore Street into a Google Maps search, or take a drive down the Moreno Valley Freeway, you might see a tumbleweed or two—but the house, and Divola’s presence with it, is nowhere to be found. “There’s something very different about homes in California—we expect them to be torn down in 40 to 50 years. We don’t have the same expectation of physical continuity in the landscape that I think you have here on the East Coast,” Divola ruminates. “Almost nothing out where I’m living is built to last for 100 years.” As the photographer surveys the crumbling spaces of his “Theodore Street Project,” one has the sense that his images are here to stay.
Alexxa Gotthardt
“John Divola: Theodore Street Project” is on view at Maccarone, New York, Mar. 12–Apr. 23, 2016.
Related Stories