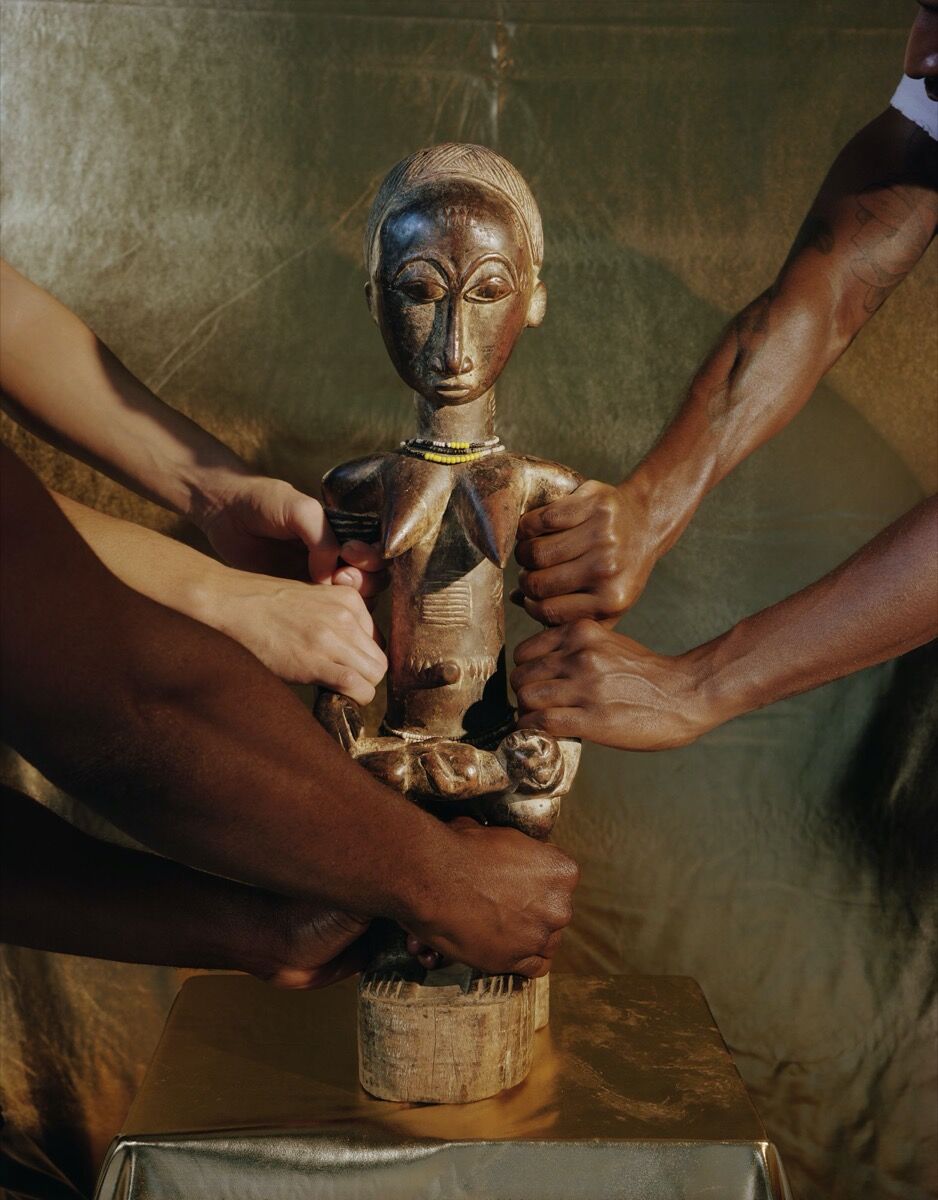 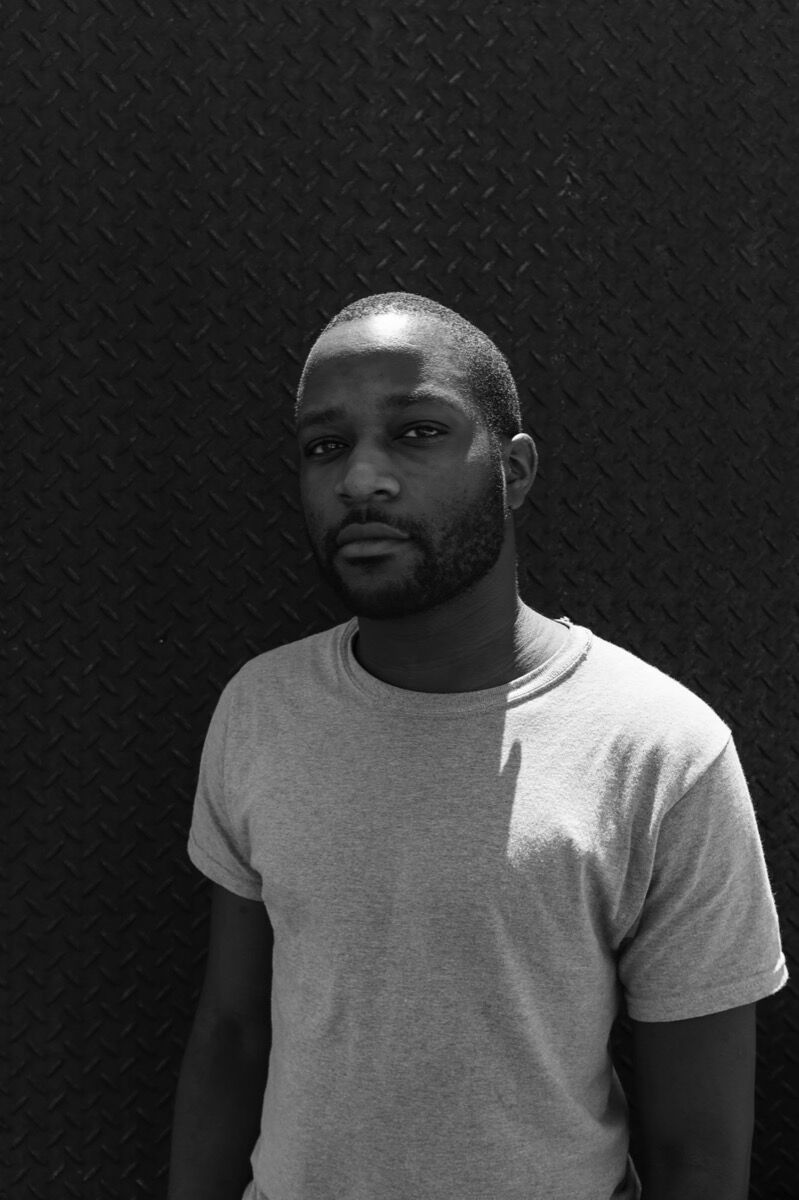 
For artist
John Edmonds
, the way that we choose to present ourselves when we step into the world each day speaks volumes. Through his photo-based practice, he sets out to capture such multitudes. “It’s an epic gesture, I think, to try to synthesize all of these aspects of our being into a picture plane,” Edmonds said in a recent interview.
He often photographs Black queer men, including friends, members of his creative community, loose acquaintances, and complete strangers. He portrays them in opulent scenes that explore desire, acceptance, and community, while drawing on references like studio portraiture of the Harlem Renaissance era,
Surrealist
images by
Man Ray
, and religious paintings. Altogether, through combining his contemporary subjects with these historical nods, Edmonds challenges dominant depictions of Black identity. 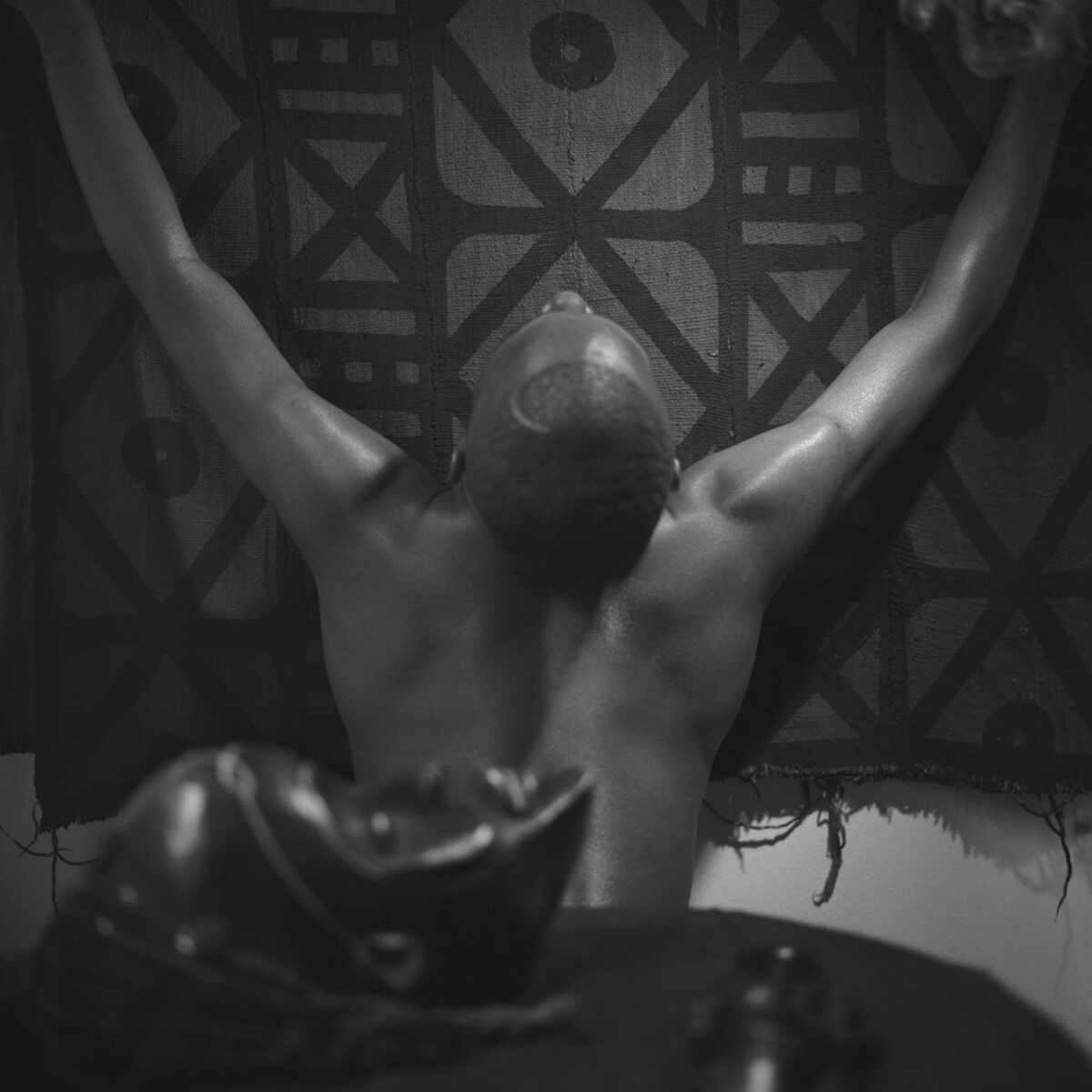 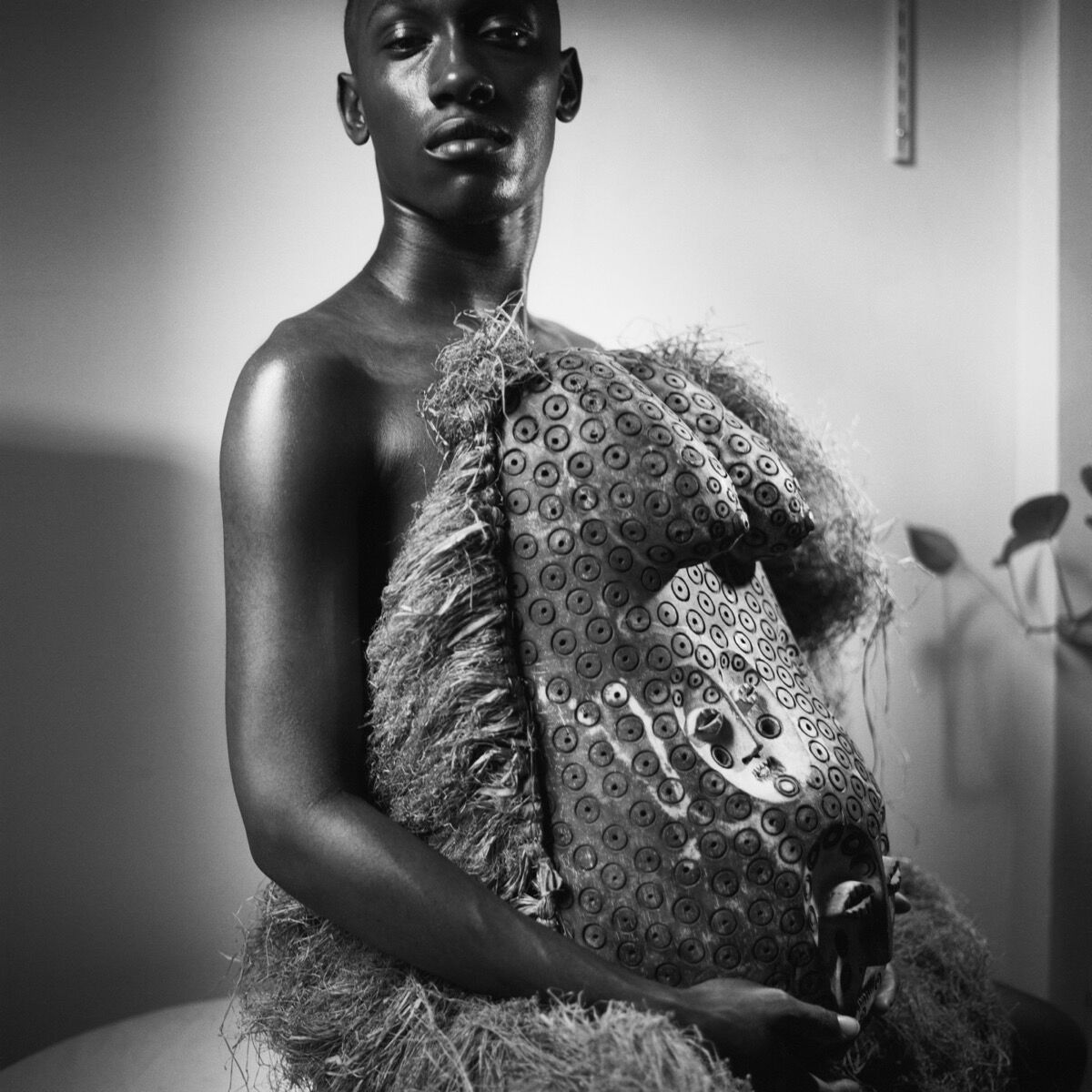 Edmonds’s first solo museum exhibition is due to take place later this year at the Brooklyn Museum. Titled “A Sidelong Glance,” the show was originally set to open this May, but was postponed due to the COVID-19 crisis; the museum hopes to present it this fall, though the dates are subject to change. The show will feature a selection of Edmonds’s most noteworthy photographs, plus more than 10 new works. He’ll also debut a new video piece, Spiritual Bath (2020), which features footage from a spiritual cleansing ritual he took part in during a trip to Ghana earlier this year. The exhibition is part of Edmonds’s winnings as the inaugural recipient of the UOVO Prize, which recognizes an emerging Brooklyn artist each year. (The award also includes a $25,000 cash prize and a public art commission on the façade of UOVO’s Brooklyn location.)
Originally from Washington, D.C., Edmonds moved to Brooklyn in 2016, after earning his MFA in photography from the Yale School of Art. He has since developed an impressive body of work that balances careful attention to compositional detail with a focus on fostering community. In 2018, his debut monograph, Higher, was listed as one of the top 25 photo books of the year by Time magazine. 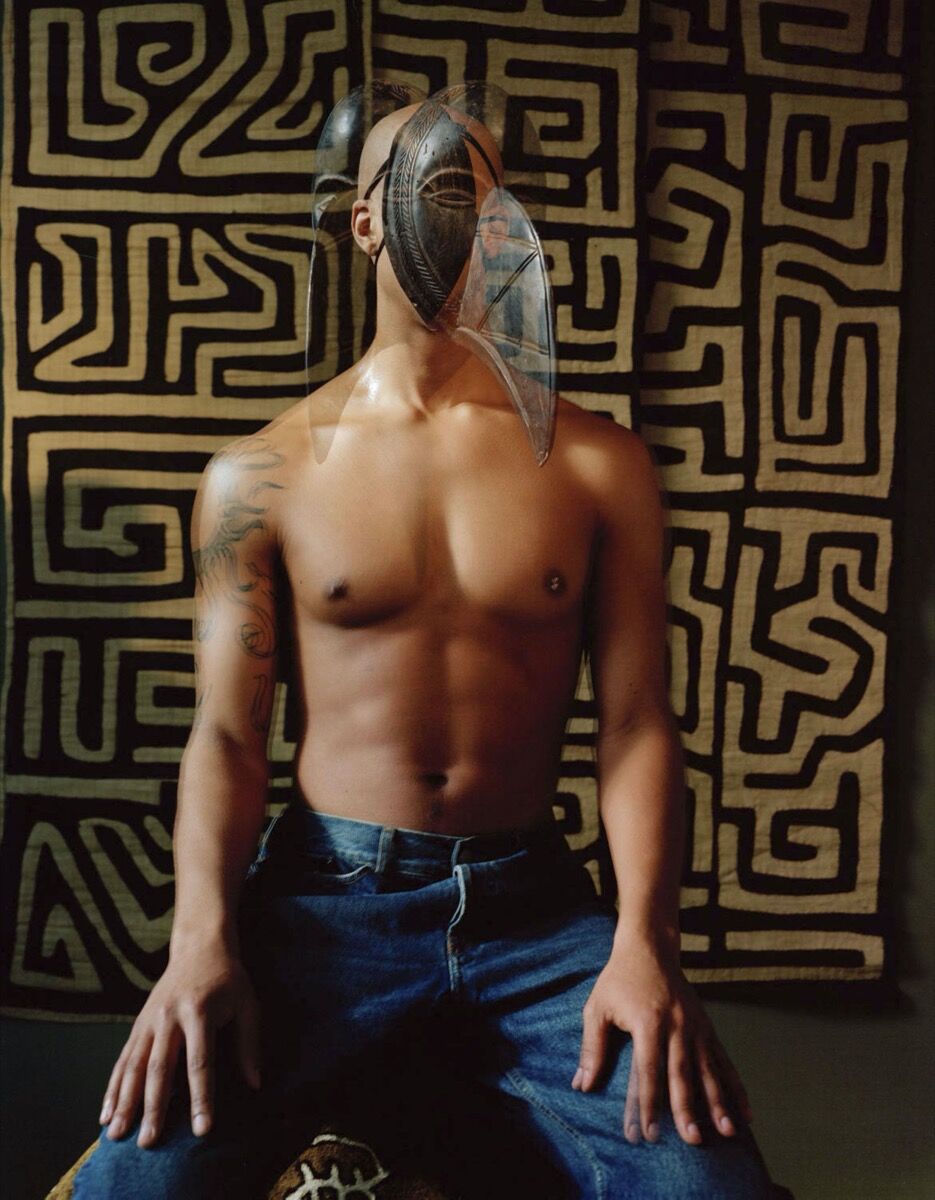 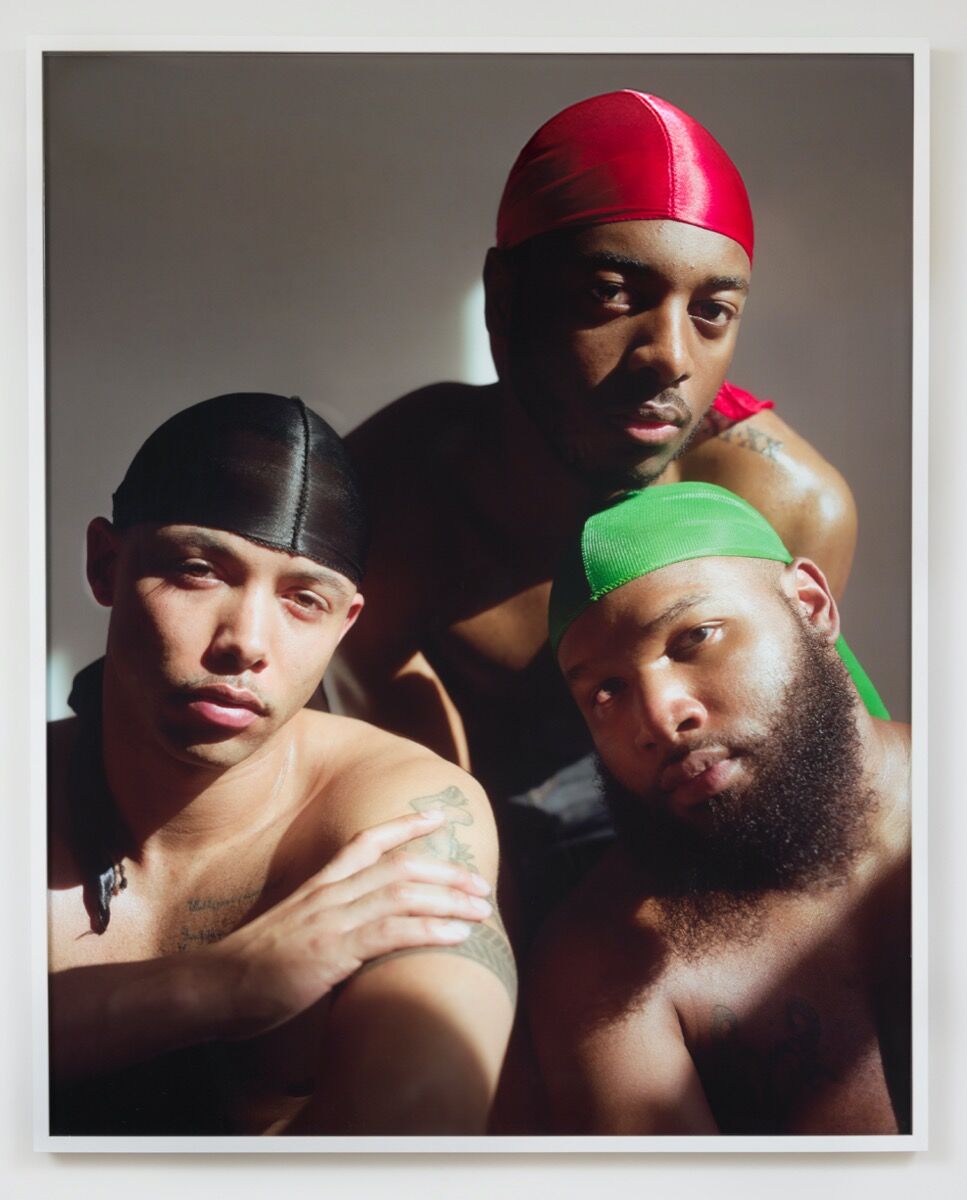 Advertisement
The Brooklyn Museum show will feature work from one of Edmonds’s best-known bodies of work, “Tribe: Act One” (2018). He earned critical acclaim for the series in 2019, when several photographs were featured in the Whitney Biennial. One portrait, AMERICAN GODS (2017), features three Black men huddled together in a pyramid, their faces gently lit and their torsos exposed. They’re clad in silky do-rags in red, green, and black—the colors of the Pan-African flag. It’s a proud yet tender visual.
The show also includes Edmonds’s photographs that picture his subjects alongside African masks and other artworks, many of which are from the Baule group of West Africa. He chooses to include these objects not just to reimagine their aesthetic potential, but to surface the “spiritual ephemera” they possess. “In a way, I’m reifying all of these objects,” Edmonds explained. “They are often put away or behind glass, and it doesn’t allow them to really have a life.” He believes deeply in the spiritual power imbued in these objects, and he regularly asks himself how he wants to use that power. 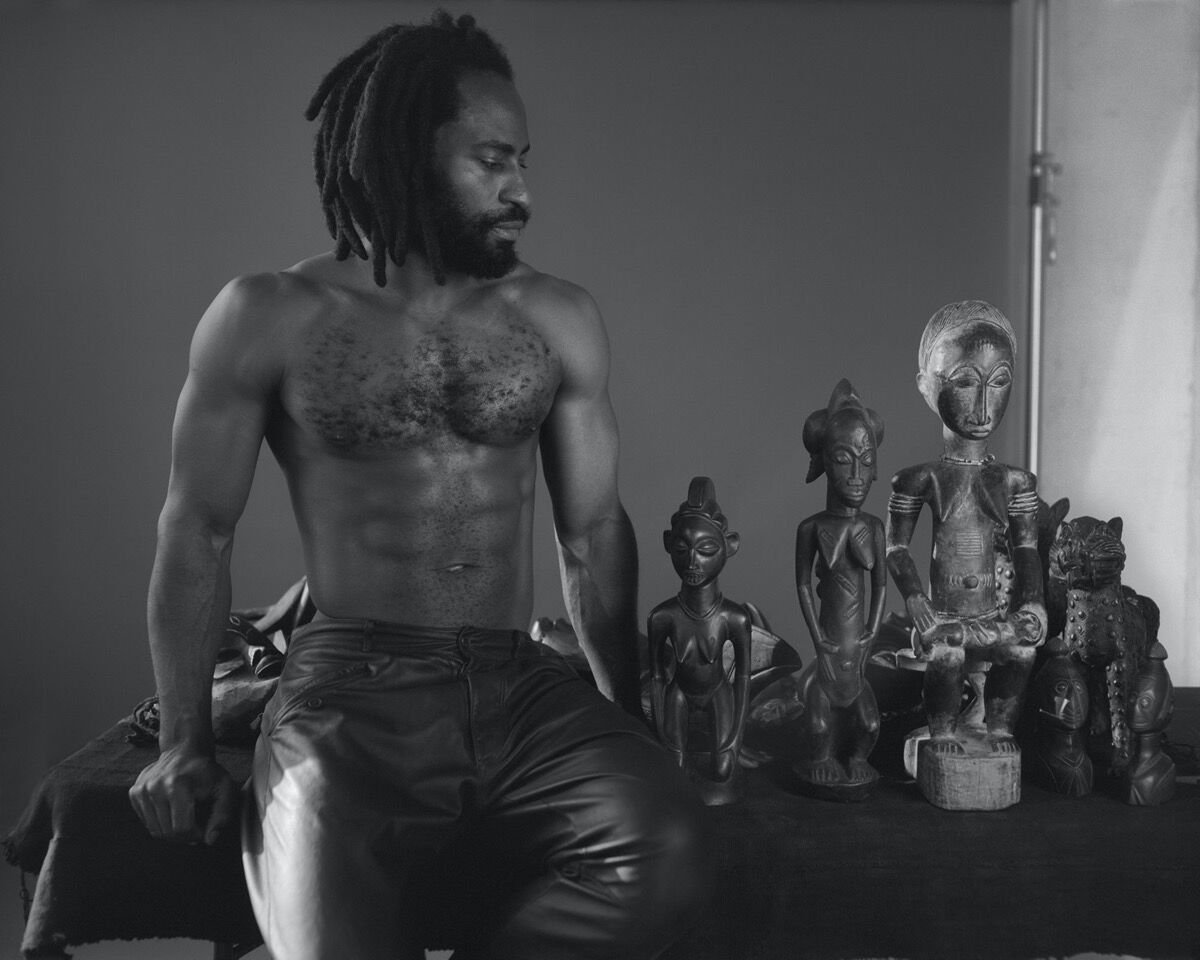 To create new images for “A Sidelong Glance,” Edmonds engaged directly with the museum’s Arts of Africa collection, which includes masks and sculptures from the collection of celebrated Black novelist Ralph Ellison. Edmonds has an African art collection of his own, which he started a few years back. He came across an African art dealer outside of the Museum of Modern Art building and something clicked. Growing up, he was surrounded by “pseudo African objects” in his childhood home, he recalled, like many Black Americans (I’m staring at an arrangement of African masks as I write from my family home). Edmonds notes that regardless of the “authenticity” of these objects, they speak to a larger conversation of African diasporic people’s longing for the land of Africa.
One of the exhibition’s most striking works, Two Spirits (2019), shows a bare-chested figure wearing a prominent mask that resembles a bird with a large beak. The image—blurred in certain places, mimicking a double-exposure technique—is subtly disorienting. The gender-fluid figure appears completely vulnerable, but with their entire face obscured by the mask, they retain an element of protection. 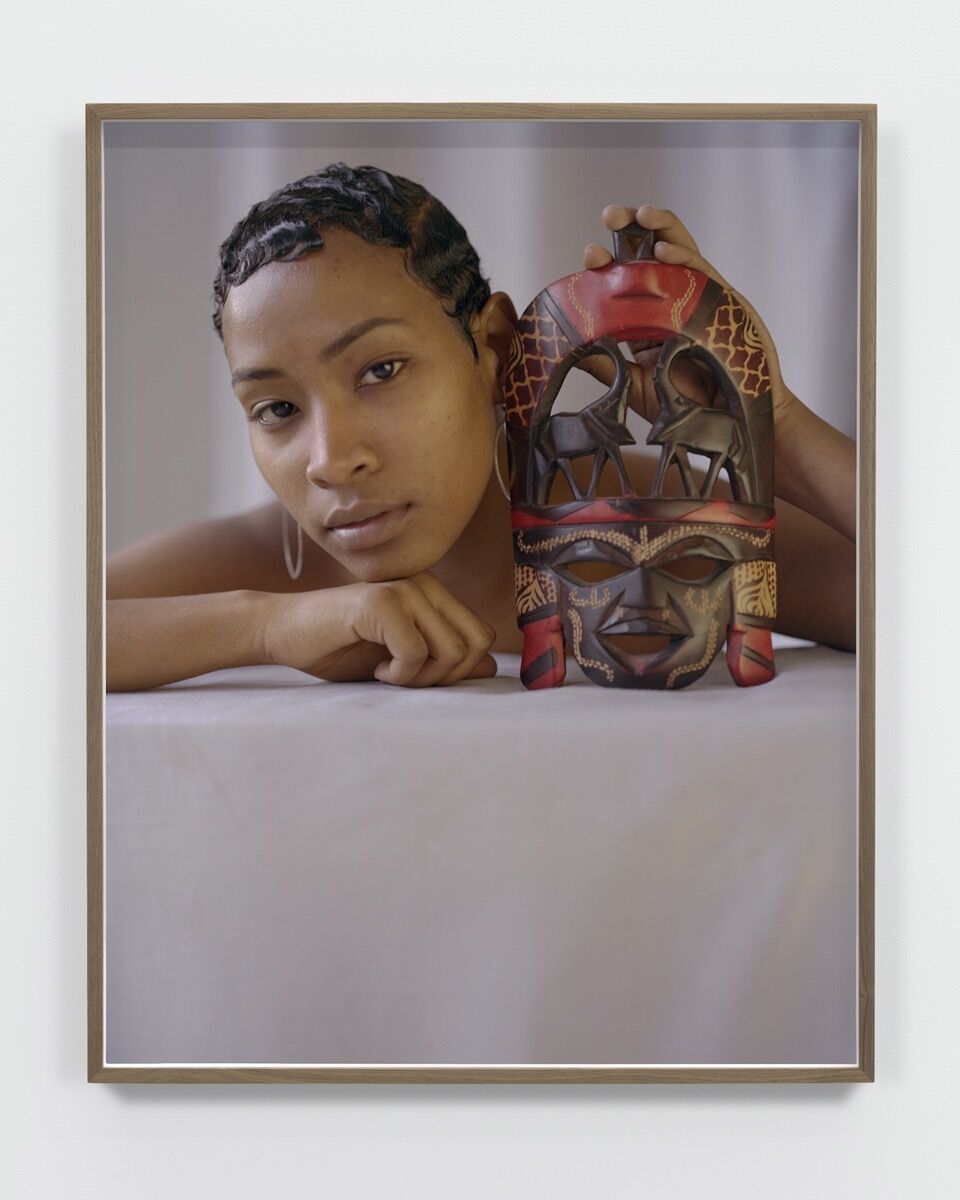 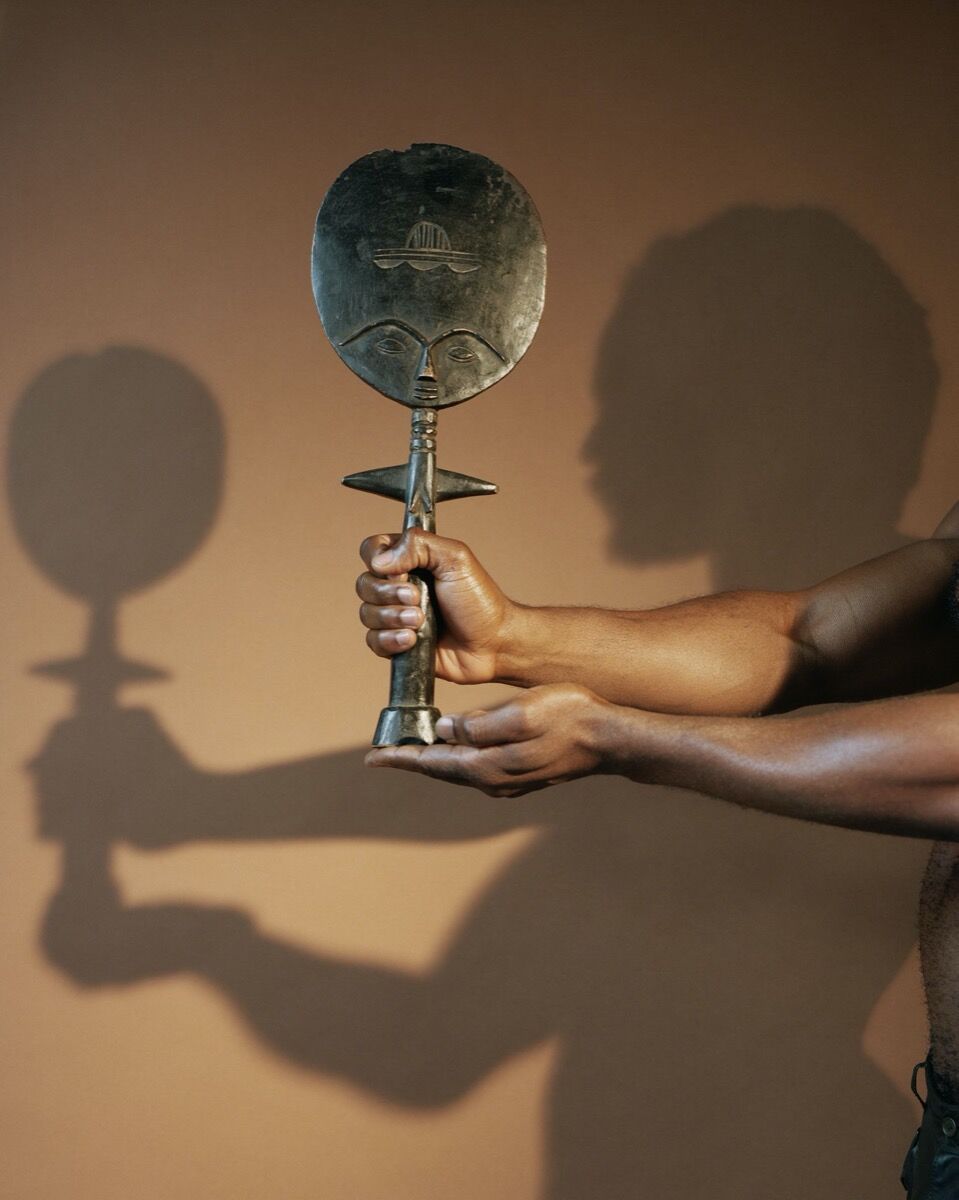 John Edmonds, Holding a sculpture (from the Ashanti), 2019. © John Edmonds. Courtesy of the artist and Company, New York.

Perhaps the most notable of these images is Tête de femme (2018), which was recently acquired by the Guggenheim Museum. The portrait draws from the composition of Man Ray’s black-and-white photograph Noire et Blanche (1926), which shows a white woman with her eyes closed holding an African mask beside her face.
Through his work, Edmonds hopes to challenge the art-historical canon by centering African diasporic people as their full selves. “I’m really understanding the way that the African art object has been falsely and improperly regarded in visual history,” he explained. In Tête de femme, he features a Black woman with her eyes wide open and a calm look on her face. Her hair is styled in slick, neat finger waves, and she holds a brightly colored wooden mask beside her face. Each element of the image boldly asserts the deserved place of African diasporic people and culture in contemporary photography.
Edmonds urges us to consider the symbolic importance of the objects in our lives. His carefully crafted images offer a poignant reflection on collective unity and reclamation of power. The work feels particularly resonant now, when so many of us yearn for closeness and inspiration.
Daria Harper
Related Stories