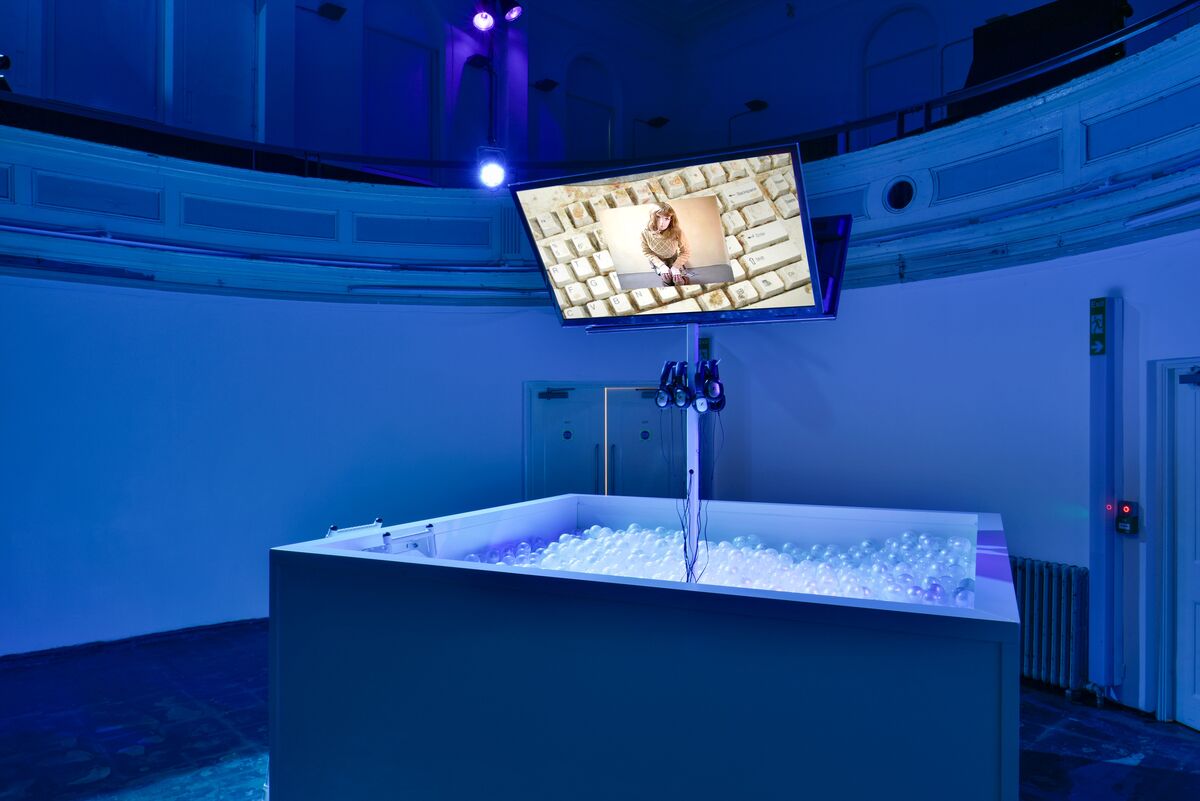 Leave it to Frieze Week to indulge the crawl-into, climb-onto art experiences that distill the simple, childlike pleasures of viewing art. Last year,
Carsten Höller
’s giant die at Frieze London found Klaus Biesenbach climbing through its wormholes; the year before, a mammoth figure by Jennifer Rubell allowed for photo-ops inside a hollowed womb; and this year, Rachel Rose’s scale model of Frieze London offers a reprieve on plush white carpet for those who duck in—should one pass up the corridor of beds (by ÅYR) and camaraderie of collectors charging phones and resting eyes when amusement-park levels of exhaustion set in.
To top it off, a maze with an oculus rift centerpiece has lured the crowds to Zabludowicz Collection for
Jon Rafman
’s first major solo exhibition in the U.K. Every year, the collection invites emerging artists to take over their space (an old church in London’s Chalk Farm, last year transformed by
Ryan Trecartin
and
Lizzie Fitch
). And this year, the 33-year-old Canadian artist has filled the chapel with video and sculptural installations complete with a water bed, a massage chair, and a ball pit—the last of which is the uncontested ’gram of the week. For Rafman, a key figure amongst a group of prominent post-internet artists, known for fusing digital and physical spaces and referencing video games to internet memes, this collision of virtual and reality could sound like the next big art circus—but it’s surprisingly wonderful. Upon entering the show you’ll be asked to remove your shoes; slip-ons would be preferable (mine fortunately had zips)—you’ll be taking them off and on a lot. Though there’s a map of the exhibition’s many stations, the first, a giant hot-tub-sized ball pit, is impossible to miss. Climb the ladder, slip beneath a bath of translucent pearl-colored balls—deep enough to eclipse your head—and look up. Rafman’s video, Still Life (Betamale) (2013), streams above, looking deep into the web and the pleasures, and acceptance, found in fetish and online subcultures. Buried deep in the pit, the internet’s all-consuming grip on our lives makes it’s presence known. It’s potentially smothering, but like late nights surfing the net, it feels just too good to get out. Advertisement
Pull yourself together and a three-seat purple sofa awaits. It’s bespoke seating for Rafman’s Mainsqueeze (Hug Sofa) (2014), designed after “squeeze chairs” given to autistic children for comfort via enclosure. They feel like a hug, one you might need while watching the piece’s quick sequence of video clips: a bodybuilder crushes a watermelon between bulging thighs; a washing machine convulses until falling to bits; an anime couple masturbates in the glow of a static analog tv; a woman pets a crawfish to classical music and then squishes it with her sneaker.

Perhaps the strongest suit of Rafman’s films in this show is their installation. (I had a fun time climbing into the two works housed in ‘cockpits,’ a basement-bound gamer’s wet-dream wherein filing cabinets have been emptied and outfitted with flatscreens, speakers, and seating for one.) Past the former-church’s nave, in a pink-walled bedroom, a quilted twin bed sits amongst slime-covered teenage detritus: scattered horror movie magazines, old appliances, a Tamagotchi, a slinky. On the wall opposite, you’ll find Rafman’s new film, Sticky Drama (2015), made in collaboration with musician Daniel Lopatin (of Oneohtrix Point Never). After a summer spent considering gaming, Live Action Role Playing (or “larping”), and the way an imagined world can become reality, Rafman devoted the last three months in London to creating the live-action short, enlisting a cast of 35 local children. Narratives around desire, memory, history, and imagination are enacted through flashbacks in the life of a Tamagotchi—’90s pre-teen-dom has officially replaced the ’80s as the art world’s latest obsession. 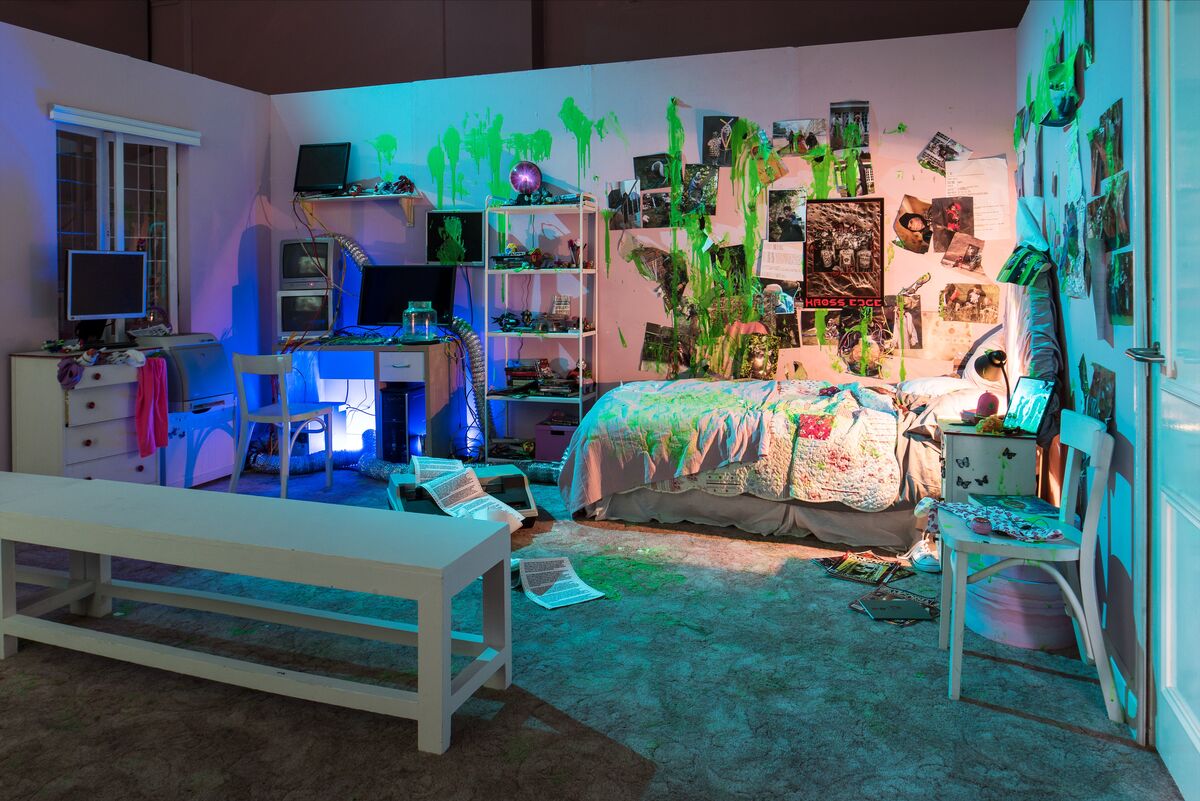 There’s more—and the show’s real tour de force requires a bit of a hunt. Following along the dark pathways of an AstroTurf hedge maze, lined with Rafman’s signature digitally rendered busts, search out the Oculus Rift waiting at its center. Encountering dead ends is encouraged, as each offers a spotlit sculpture (in marble, copper, silicone, concrete) on a mirrored plinth—teasers to the behemoth, gilded figure that awaits at the labyrinth’s center. 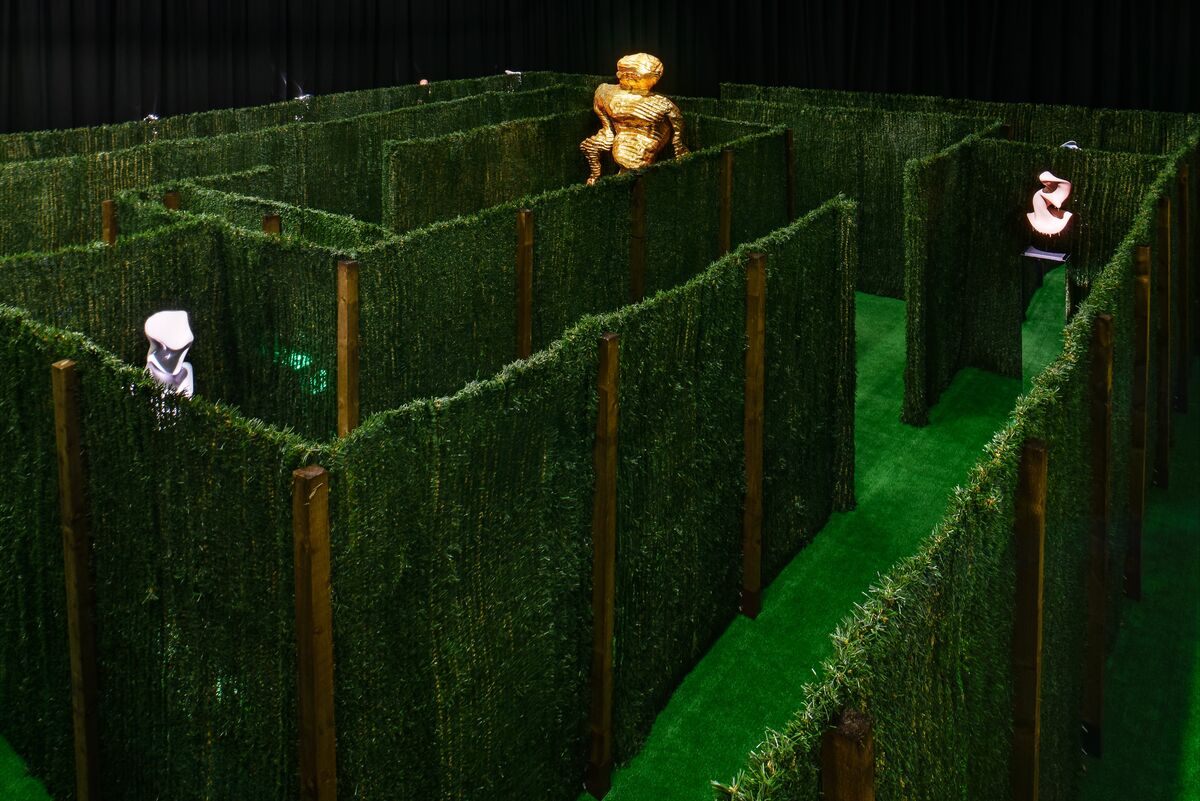 Lines have become an unfortunate, if planned for, feature of museum and gallery shows in recent years, most actively begun by artists like Höller who’ve turned institutions into amusement parks complete with slides and carousels—but the line for Rafman’s Oculus is truly worth the wait. Take what you know of Rafman’s older works using the device, or
Daniel Steegmann Mangrané
’s piece from the New Museum Triennial, and toss them aside. This work is quite possibly the Frieze Week magnum opus—and it uses virtual reality technology in a way unprecedented in art. When you hit the front of the queue, you’ll be placed face-to-face with the aforementioned golden sculpture. But, once the headgear goes on, all that was once around you will soon disappear. Suddenly you’re moving forward, as if riding a motorized walkway in an airport, through a glassy landscape and into a tunnel that leads to a dark and enchanted forest. Looking up, starry, startlingly realistic night skies reveal themselves through the trees; every tree pulses, as if breathing, and peeking through branches are Rafman’s colossal sculptures, littering the landscape like follies you’d walk to—had you not been instructed not to move. At the climax, you’ll slowly levitate until you’re among the treetops, looking down on this magical world, until the view fades to black. Hurry up and hand your goggles over to the next in line. They’ll be dying to know why you’ve gasped and sighed so many times in this surprisingly moving five-minute span.

The last stop is a hike upstairs to the mezzanine. If you’re still feeling dazed, Rafman’s offered up a massage chair equipped with looping video of cityscapes. And nearby, a waterbed streams footage via a monitor suspended overhead: a wave pool full of children sporting brightly colored inner tubes, loops to the lull of ambient music. Lightheaded and entranced, I pull myself from bed to head blissfully back to Frieze. As Anita Zabludowicz added, with a glint in her eye, on the way out, “We’ve just seen a glimpse of the future.”
—Molly Gottschalk
“Jon Rafman” is on view at the Zabludowicz Collection, London, Oct. 8—Dec. 20, 2015.
Related Stories