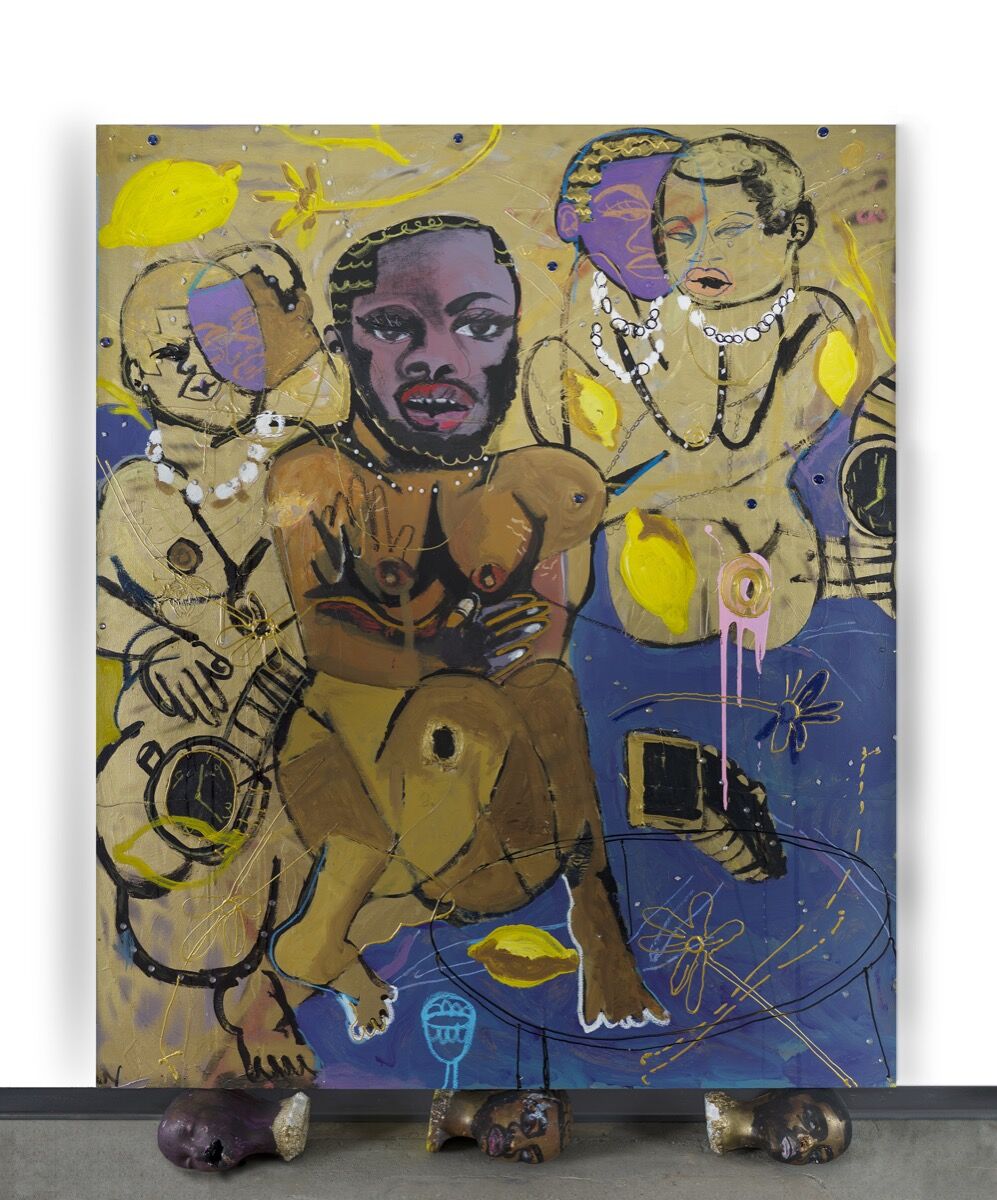 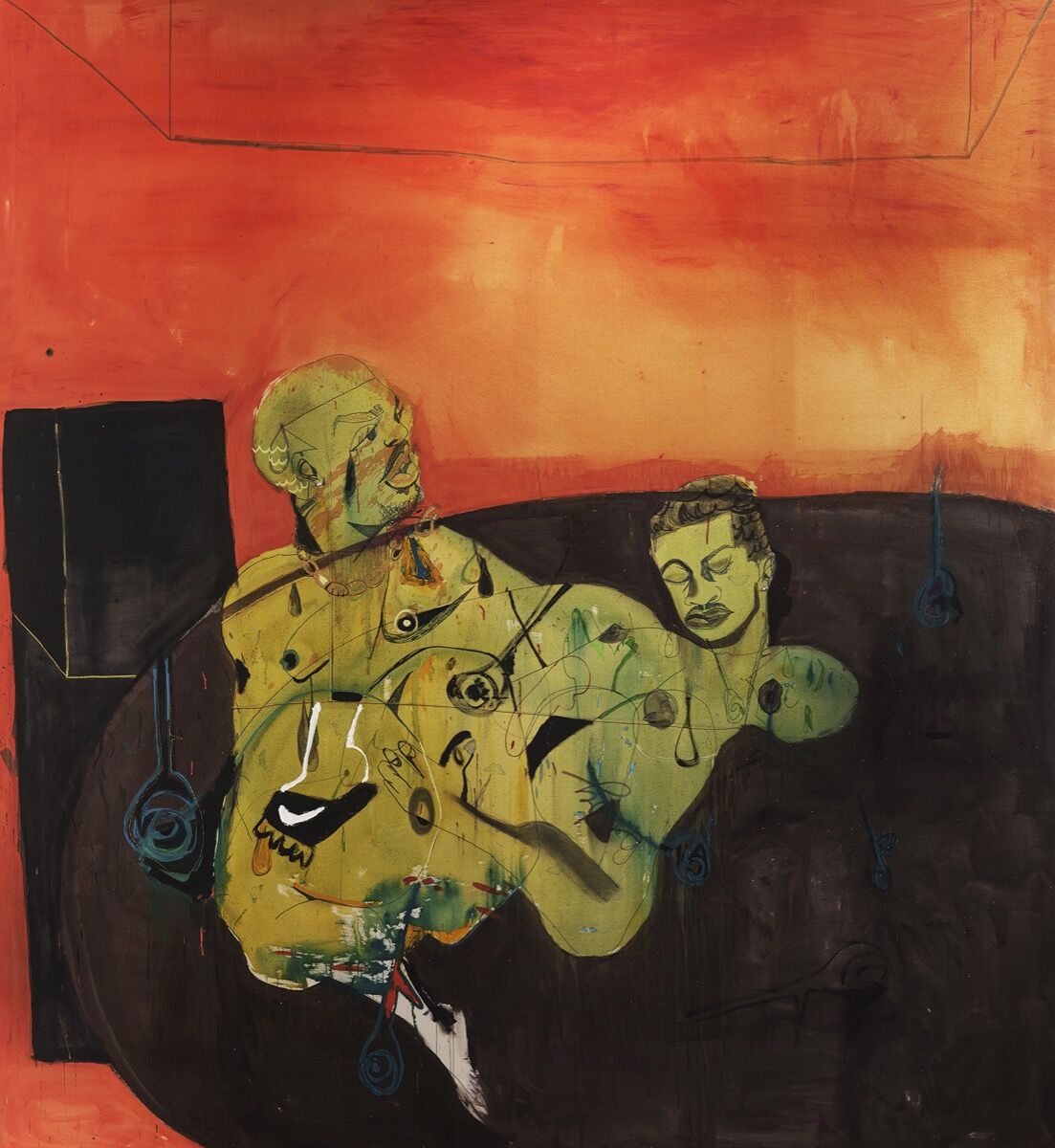 Jonathan Lyndon Chase
’s paintings sometimes speak to him. They tell him what direction they’d like to take, how heavy the line should be, their color and composition. The figures in his most recent paintings asked him for a little more space. “The paintings were kind of like, ‘Hey, Jon, we need to become bigger,’” he explains. So he went for a much grander scale, responding to their call for “more presence and power” by creating compositions that are nearly 10 by 10.5 feet. That opens up a lot more room for his full-bodied, gender-defying figures, floating in ambient blue or engaged in intimate acts in abstracted interior spaces.
Some of Chase’s latest paintings have become larger to meet the growing opportunity he’s been given as an artist. Though just 29 years old, this week, he’ll have his work on view in the cavernous space of the Rubell Family Collection in Miami, where he is the institution’s 2018 artist-in-residence. Chase will also be represented at Art Basel in Miami Beach in the booth of L.A.’s Kohn Gallery, which has represented him since 2017, after the gallery’s Josh Friedman discovered the artist through his first solo show at Lord Ludd Gallery in 2016 and invited him to participate in a group exhibition about fluid gender identities. 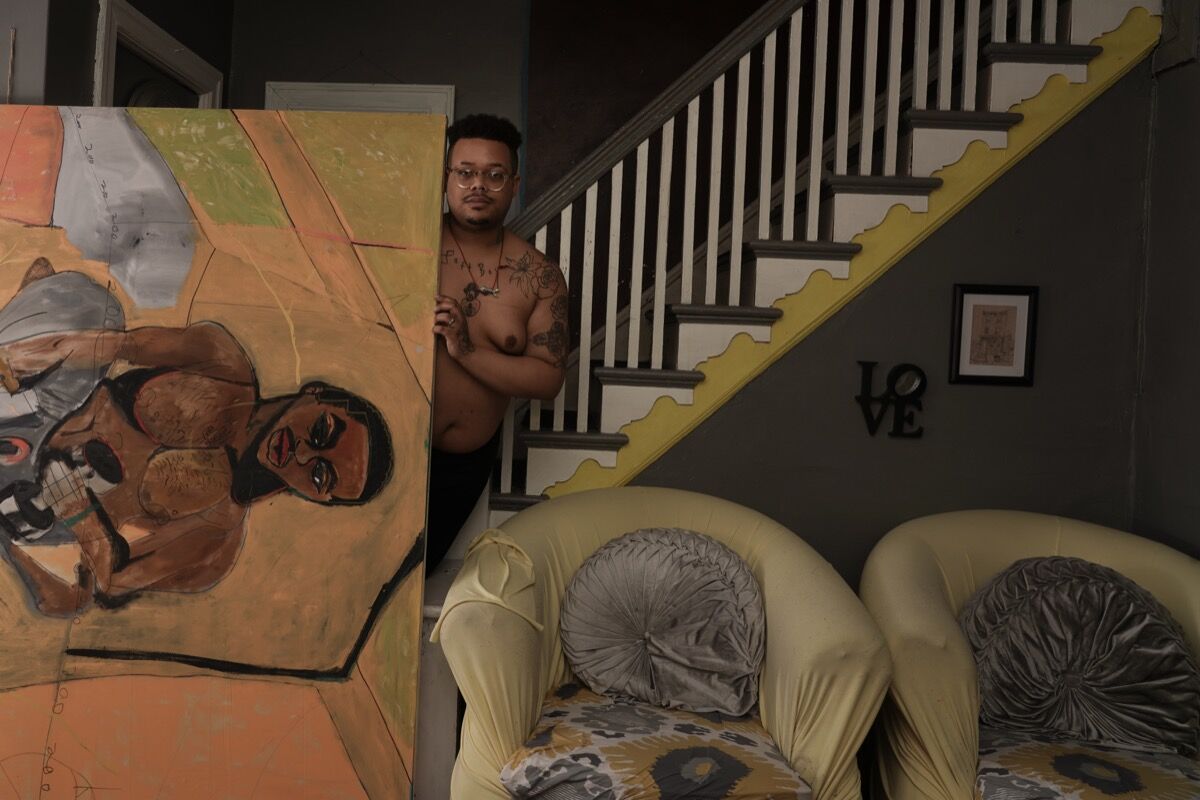 Chase’s paintings are about intersectionality—specifically his experience of “blackness and queerness and gender in America,” he says. He paints fragmented forms—usually queer, androgynous, curvaceous male bodies with elastic limbs and glowing red anuses, locked in moments of tenderness or sensual ecstasy.
Sometimes, they evoke major works or artists from the canon. His Two Men in Bed (2015) recalls
Romare Bearden
’s collaged odalisque in Black Venus (1968); 3 graces of Olney (2018) suggests the contorted, confrontational figures of
Pablo Picasso
’s Les Demoiselles D’Avignon (1907). Other times, they reflect Chase’s interest in ’90s hip-hop artists like Missy Elliott and Busta Rhymes. In butt naked dressed in nothing but pearls (2018), the work at Art Basel in Miami Beach, an erotic maelstrom of naked bodies and orifices are depicted amid floating lemons—a reference to a line from a song by Lil’ Kim. 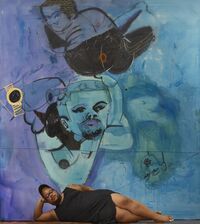 Jonathan Lyndon Chase
View Slideshow
6 Images
Advertisement
The lemons, Chase says, are also there to represent ideas of cleansing, of smelling good, of “relaxed bodies.” His work often surfaces the memories and feelings that take root in the body in this way—what Chase describes as the “anxiety, pain, and pleasure” he has experienced through his body, and “the emotional highs and lows” that “expand out to the environment.” These relate to his encounters in a world that, by and large, demands conformity from bodies. His paintings are informed by everything from his experiences growing up in a Christian Baptist community in Philadelphia (“There is love there, but it’s not always as welcoming to everyone who doesn’t fit the mold,” he says), to his tumultuous emotional state when he came out after high school, to his later, life-affirming experiences of queer love and intimacy. 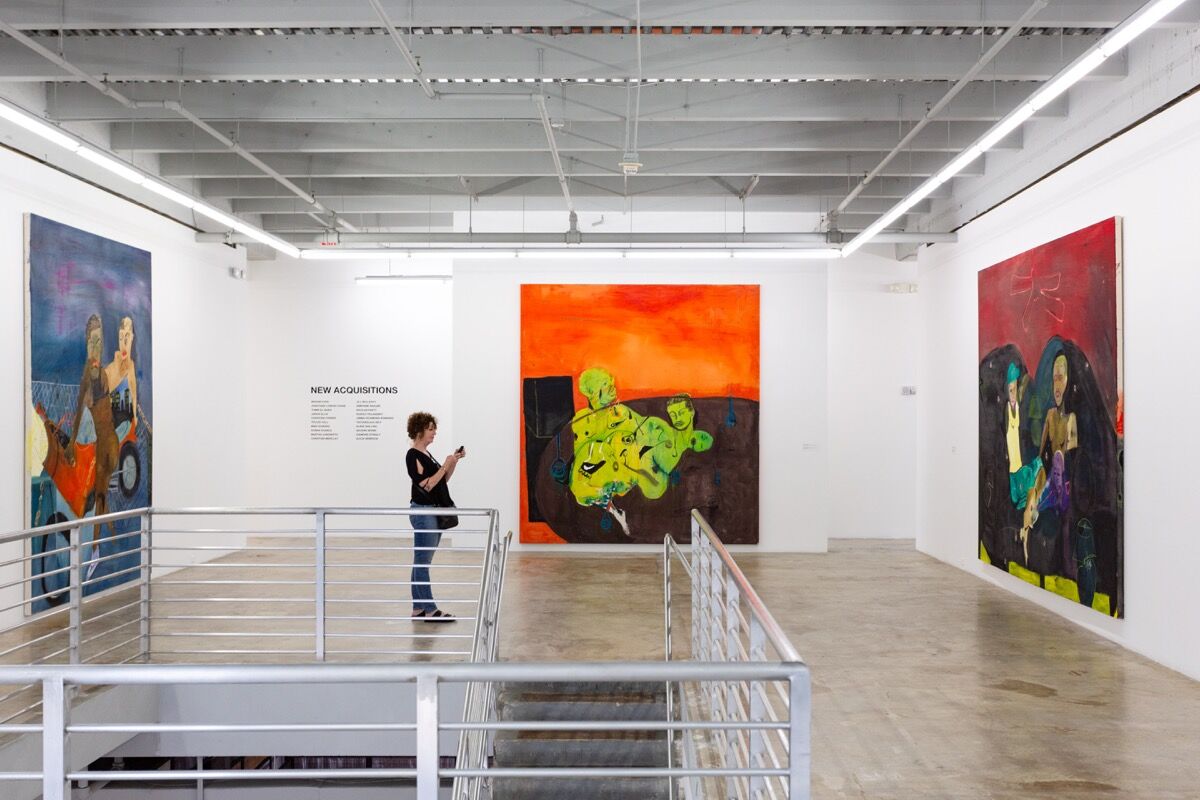 A certain generative energy between people—the desire to feel one’s physical boundaries melt into another—is perhaps the strongest thread through all of Chase’s work; it’s also one of the aspects of his paintings that drew collector Mera Rubell’s eye. “For me, there’s a lot of action and sensual moments within the canvas,” she says of his paintings. “There’s a communication that is private and loving. Within each painting are humans trying to find each other.”
With his new, large-scale works, Chase says his body was challenged in the studio in a way that it hasn’t been before—a process that he found to be quite transformative. He eschewed scaffolding in favor of moving his paintings up and down the wall or resting them on the ground, so that he would have to more authentically navigate their scale. Physical exertion and muscle memory are important to him—a desire to feel engaged with the work on a molecular and metaphysical level. “I’ve been very sore, but it’s been very meditative and spiritual,” he says.
The result is a painting like Baby boy I know Your tired (2018), where two jumbo figures seem to float in a watery abyss—a kind of weightless, cosmic dimension. Their bodies appear to have morphed into limbless, aquatic creatures. Chase likes to offer reminders that “we can shift and change, and be a multitude of things, because I really think that’s what we are.”
Tess Thackara
Correction: An earlier version of this story misspelled the diminutive of Jonathan’s name; it’s Jon, not John. Additionally, an earlier anecdote misstated that Josh Friedman of Kohn Gallery discovered Chase’s work through social media. Friedman discovered Chase through his 2016 solo show Rosebud at Lord Ludd Gallery.
Related Stories