Jordan Casteel’s Bold Portraiture Is More Than a Market Trend 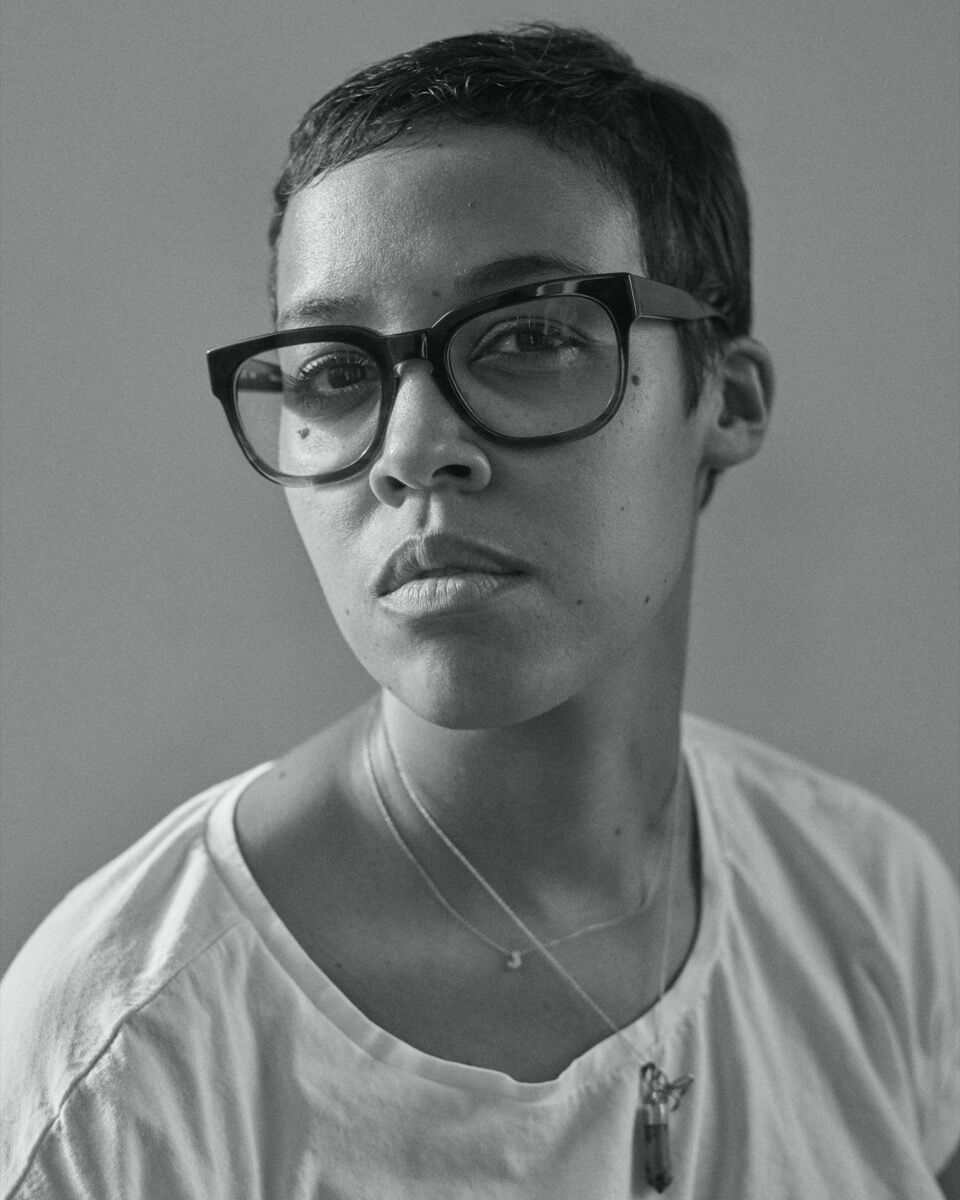 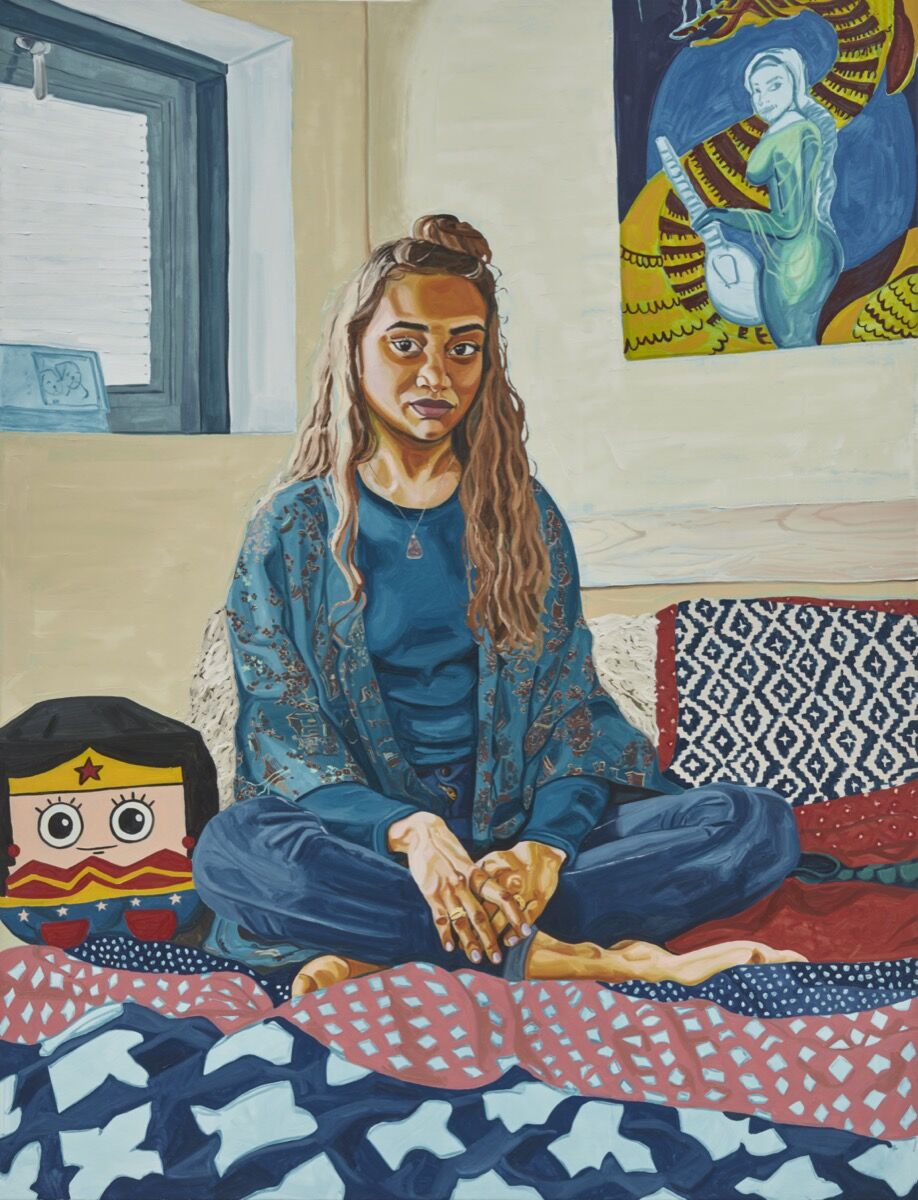 If the 2010s were, as many have suggested, the decade when figurative painting came roaring back, one of its most prominent torchbearers was
Jordan Casteel
. In 2010, Casteel—a Denver-born, New York–based painter who’s since become renowned for her striking portraits of people of color in domestic and public spaces—was an undergraduate studying abroad in Italy. It was there that she took her first oil painting class and realized she wanted to become an artist. By the end of the decade, Casteel was preparing a major exhibition at the New Museum, her first solo show at a New York institution.
“It’s deeply strange for me to walk out of the gallery and see posters wheat-pasted on the construction site next door for her museum exhibition at a museum just up the street,” said Allegra LaViola, the owner and director of Lower East Side gallery Sargent’s Daughters, which gave Casteel her first solo show in New York in 2014, just months after she’d graduated from Yale’s MFA program. “For 10 years before that, I couldn’t give away figurative paintings, but Jordan was one of the first artists of this generation doing specifically portraiture that was speaking very directly to the current moment.” 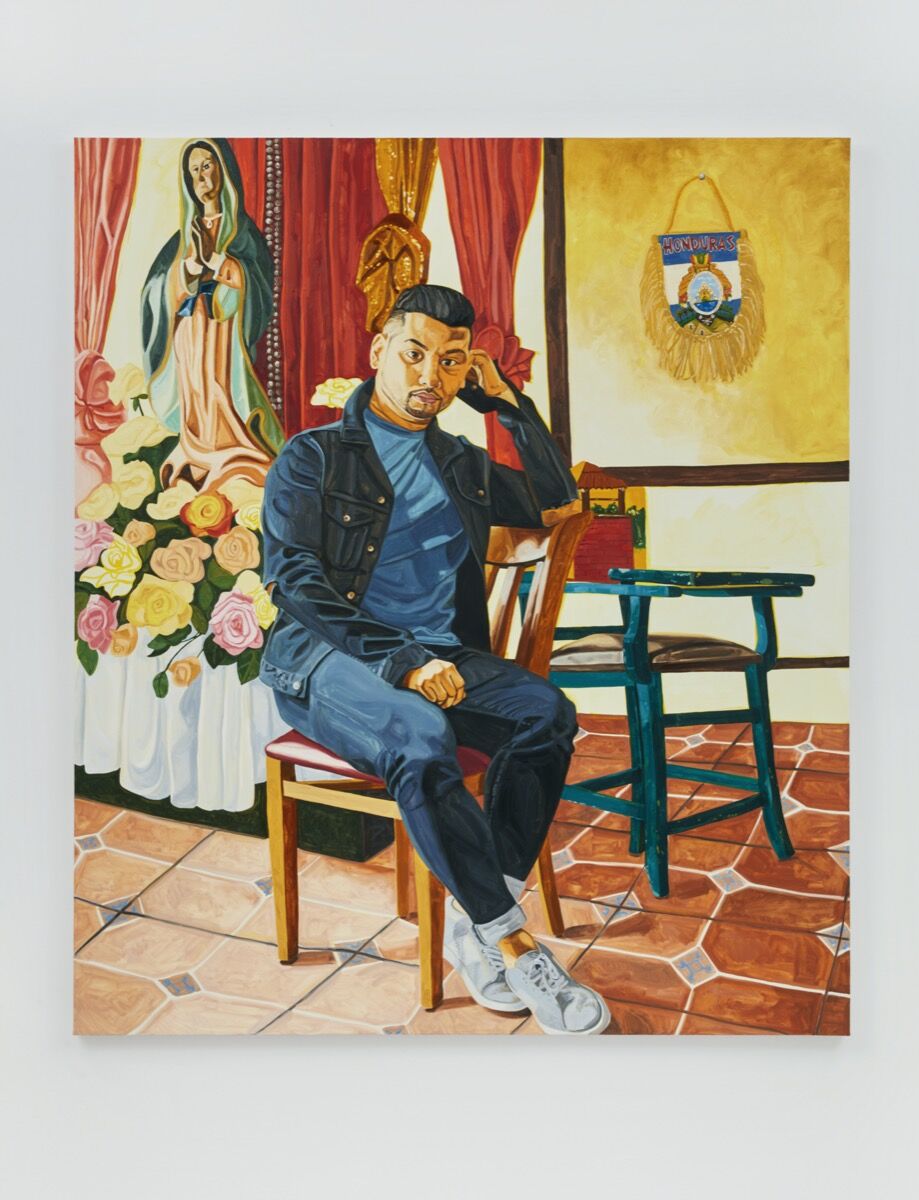 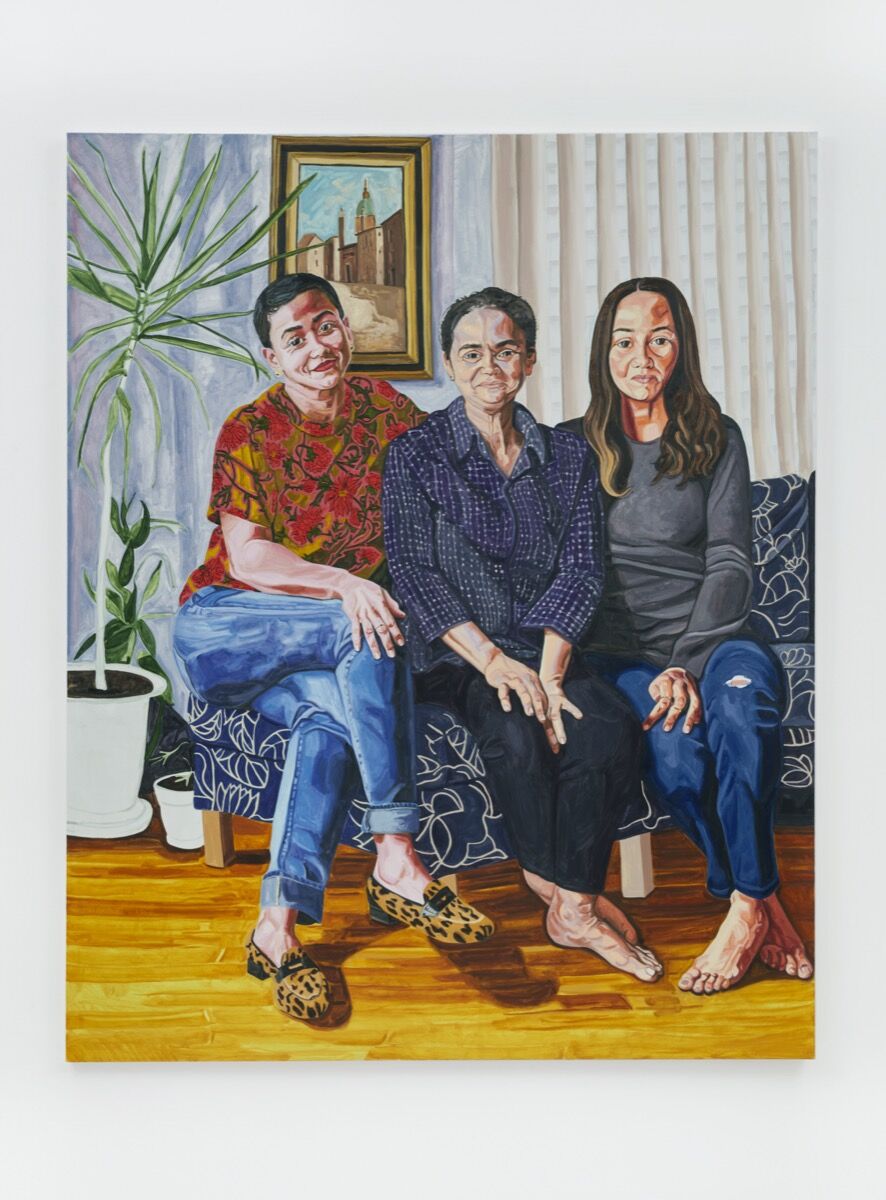 Many have drawn comparisons between her work and that of
Alice Neel
—whom Casteel has praised as “one of the first nonblack artists who I felt was representing black bodies in a way that tapped into a relationship dynamic that I really respect and value”—as well as a new generation of master painters and portraitists including
Toyin Ojih Odutola
,
Njideka Akunyili Crosby
, and
Lynette Yiadom-Boakye
.
That first show at Sargent’s Daughters, “Visible Man,” was followed by another the next year, “Brothers,” and a residency at the Studio Museum in Harlem. During that residency, Casteel started painting people she met on the street in Harlem. The resulting compositions, many of them larger than her earlier paintings, featured subjects posed on city streets, often with dramatic lighting and parts of the canvas rendered as minimal outlines, focusing attention on the figures and details of their surroundings. And even as Casteel’s work became more assertive in style and scale, her subjects retained the same vulnerability displayed by the Yale drama students she painted nude for the “Visible Man” series. 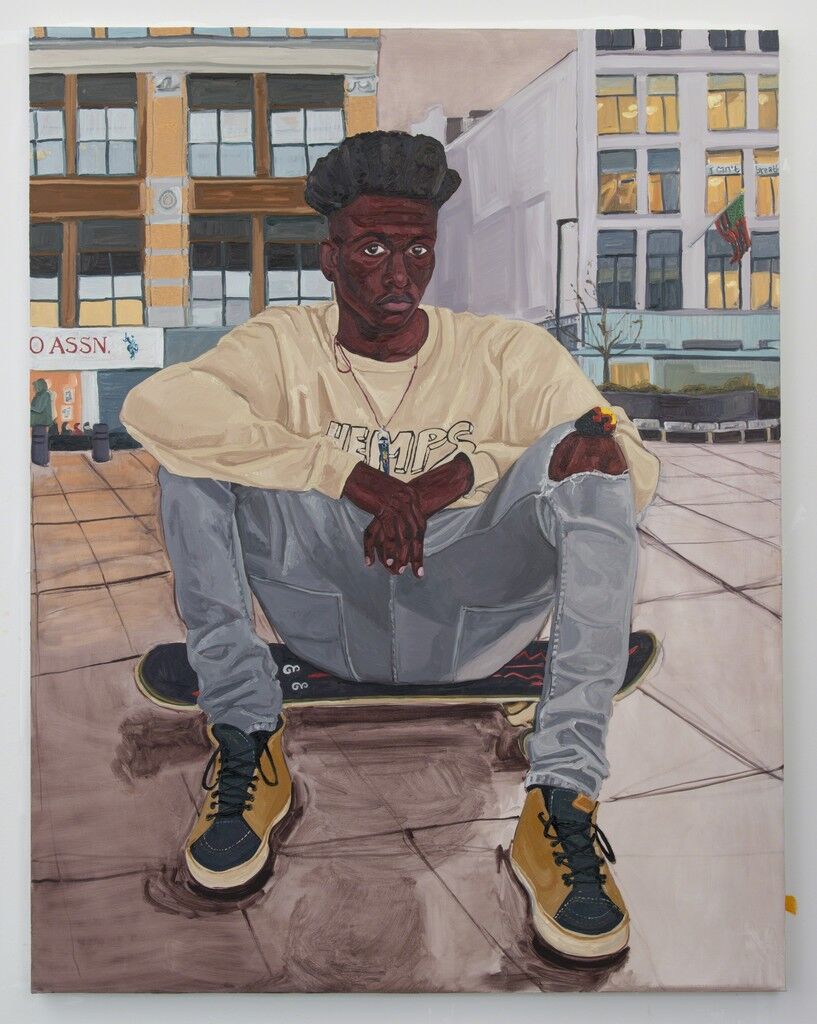 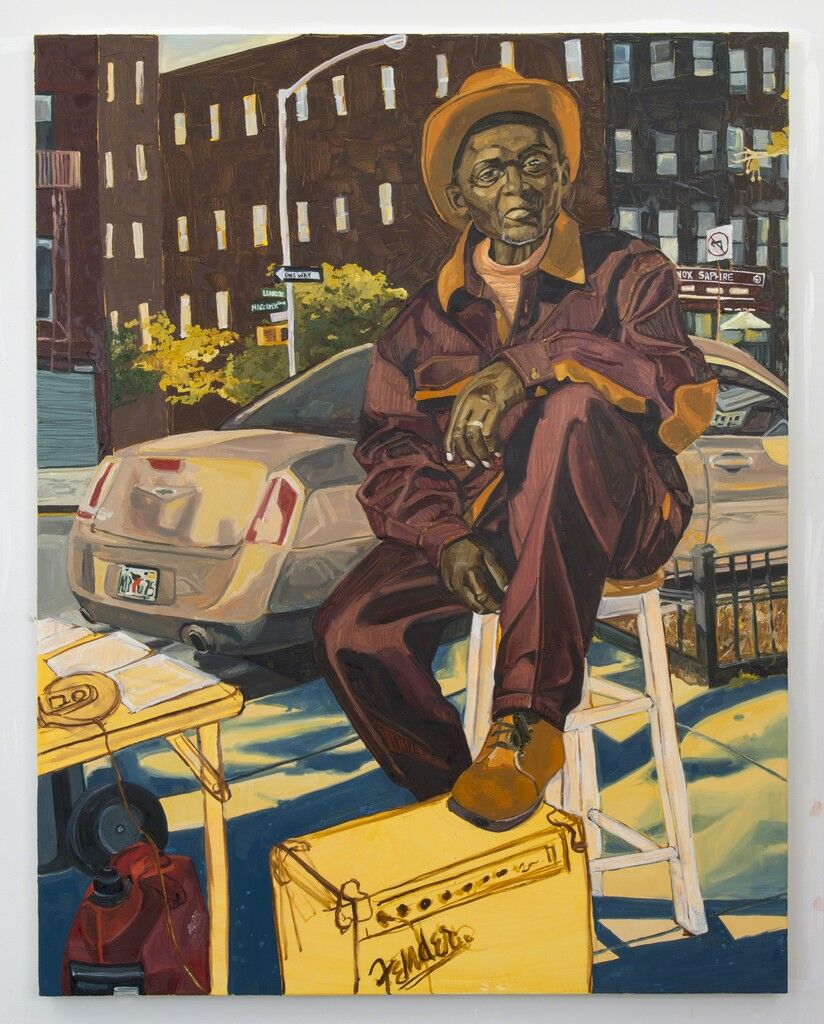 Jordan Casteel
James, 2015
The Studio Museum in Harlem
Advertisement
“There is activism in the intentionality and the scale of my work,” Casteel told Thelma Golden, the Studio Museum’s director and chief curator, in an interview included in the New Museum exhibition catalogue. “Everyone is monumental. There is room that has to be made—by the person who lives with it or the museum that has it. You have to acknowledge their bodies in space.”
After the Studio Museum residency, Casteel was picked up by the gallery Casey Kaplan; she soon showed her Harlem portraits there and at the Harvey B. Gantt Center in Charlotte, North Carolina. Then, in 2019, she had her first-ever solo museum exhibition—at her hometown institution, the Denver Art Museum—and another show with Casey Kaplan, featuring a new body of work: portraits of her students at Rutgers University–Newark, where she’s an assistant professor in the fine arts faculty. Paintings from that series were among the first that visitors to her New Museum show saw as they arrived—until, as with all other cultural institutions, the museum shuttered due to the COVID-19 pandemic. 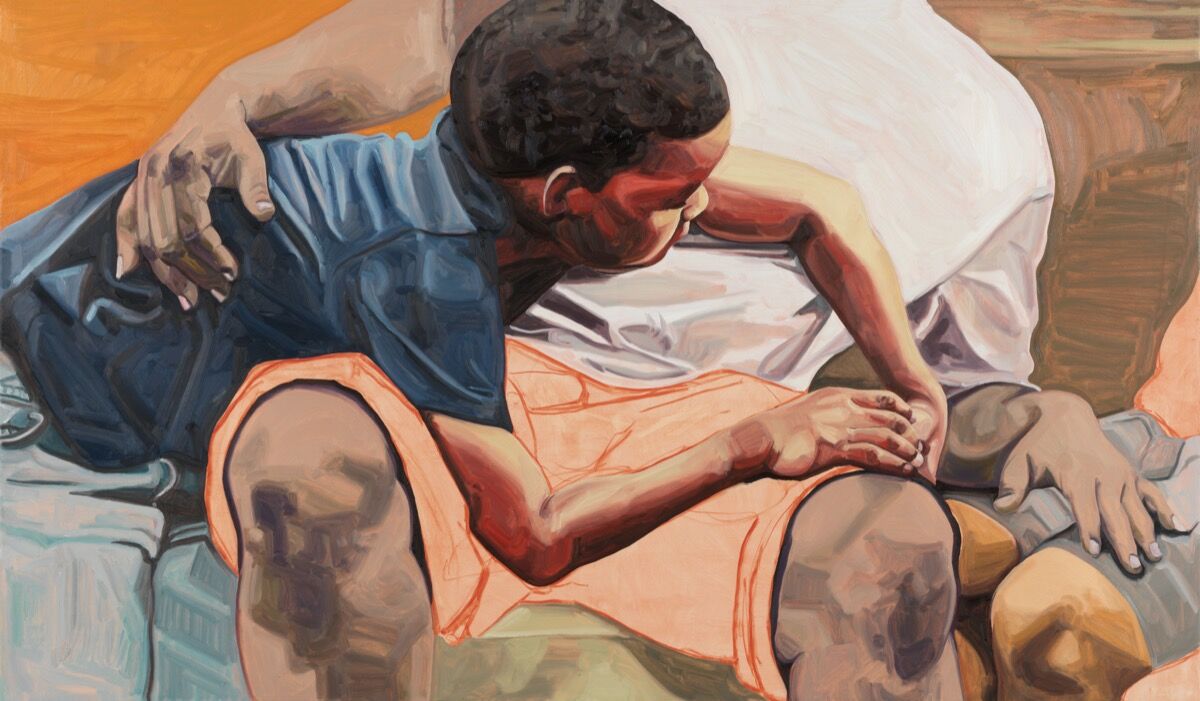 “The show is titled ‘Within Reach’ and it’s so much about proximity, both metaphorically and literally,” said Massimiliano Gioni, the exhibition’s curator and the New Museum’s artistic director. “It is ironic or somewhat paradoxical that this show is now taking place in the age of social distancing—one could say that all of her work is about bridging distances.”
The pandemic may have put Casteel’s big museum moment on hold, but it’s unlikely to slow her momentum. In just six years, she has gained enormous support from both institutions and major collectors. Her work is in the holdings of the Metropolitan Museum of Art, MOCA Los Angeles, Crystal Bridges Museum of American Art, Pérez Art Museum Miami, SFMOMA, and others. The lenders to the New Museum exhibition include a Who’s Who of influential collectors, from Kasseem “Swizz Beatz” Dean and Alicia Keys to J. Tomlinson Hill, Nancy Nasher, Pamela Joyner, and Komal Shah. 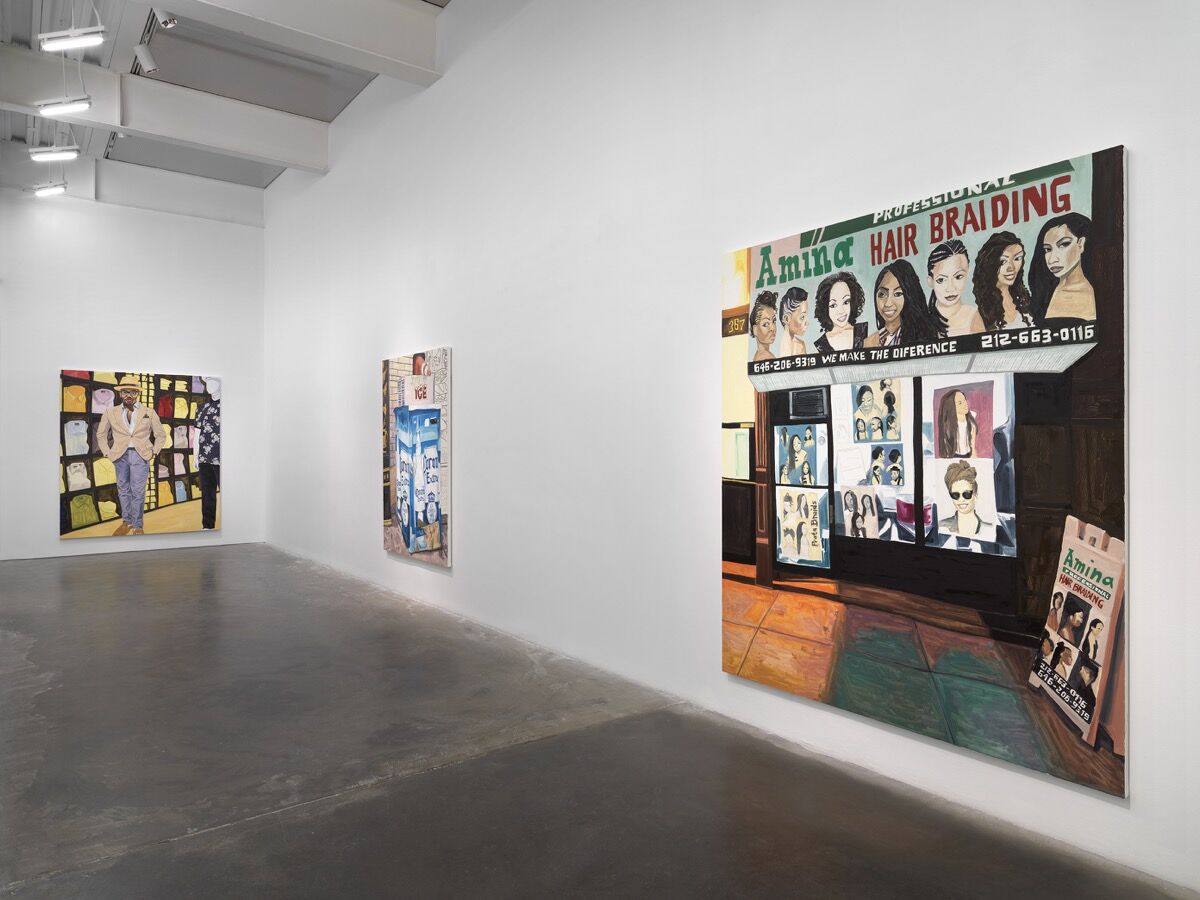 “Very early on, there were people who recognized that the work was powerful and she had something important to say,” LaViola said, recalling the response to Casteel’s 2014 and 2015 shows at Sargent’s Daughters, when her paintings were priced at $6,000 apiece and from $8,000 to $10,000, respectively. Now, her new works sell for more than $100,000 on the primary market. At Frieze Los Angeles this year, Casey Kaplan quickly sold all three new Casteel paintings in its booth, one of them to Ari Emanuel, the co-CEO of Endeavor, which owns a majority stake in Frieze. (The New Museum exhibition includes another Casteel from Emanuel’s collection.)
That kind of demand, unsurprisingly, has sparked a fervent secondary market for Casteel’s work. The first time one of her paintings appeared at auction, at a Sotheby’s day sale in the spring of 2018, it sold for about four times its high estimate. Four more of her canvases have hit the auction block since then, and each time, the competition has been fierce. In February, Christie’s smashed the auction record for Casteel’s work when her 2013 painting Mom—a delicate, introspective portrait of her mother executed while Casteel was still in grad school and featured in her Denver Art Museum exhibition—sold for £515,250 (about $666,000), more than double its high estimate of £250,000 ($323,000). 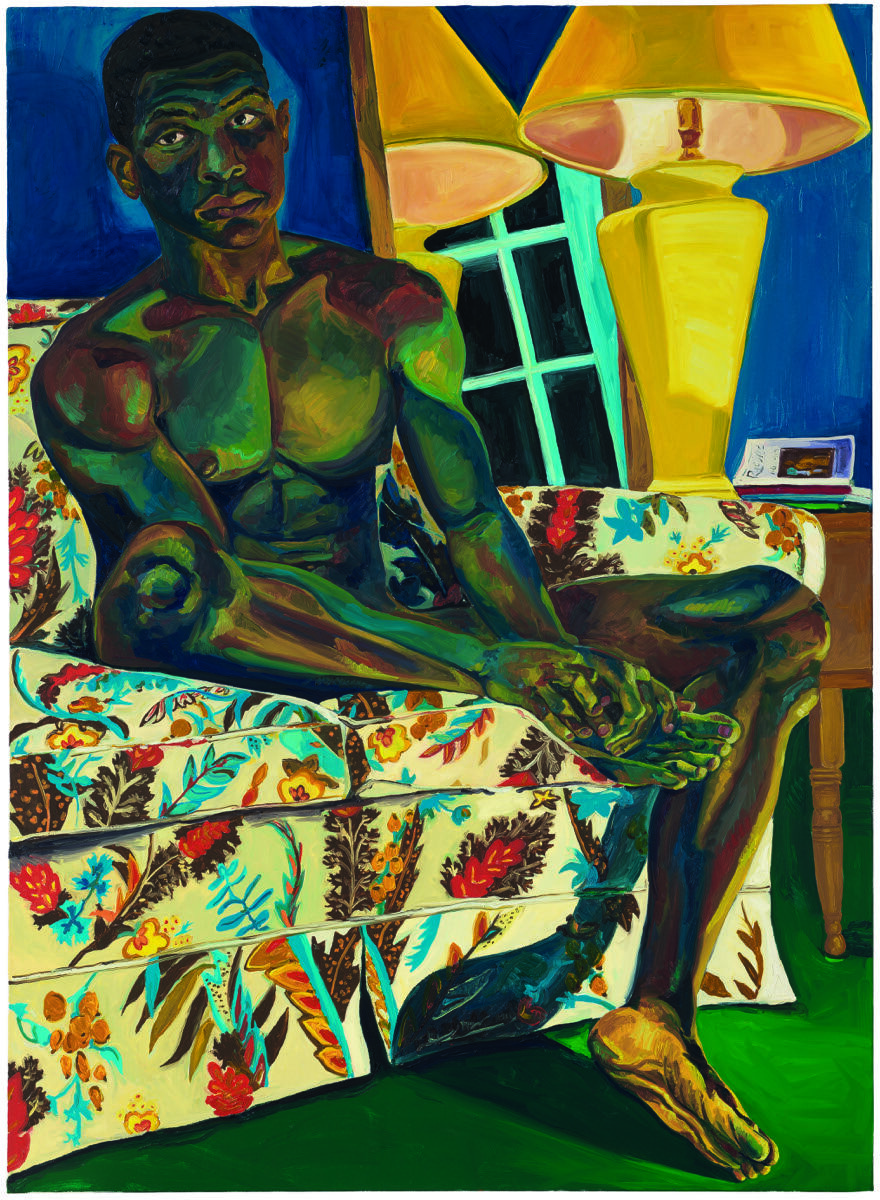 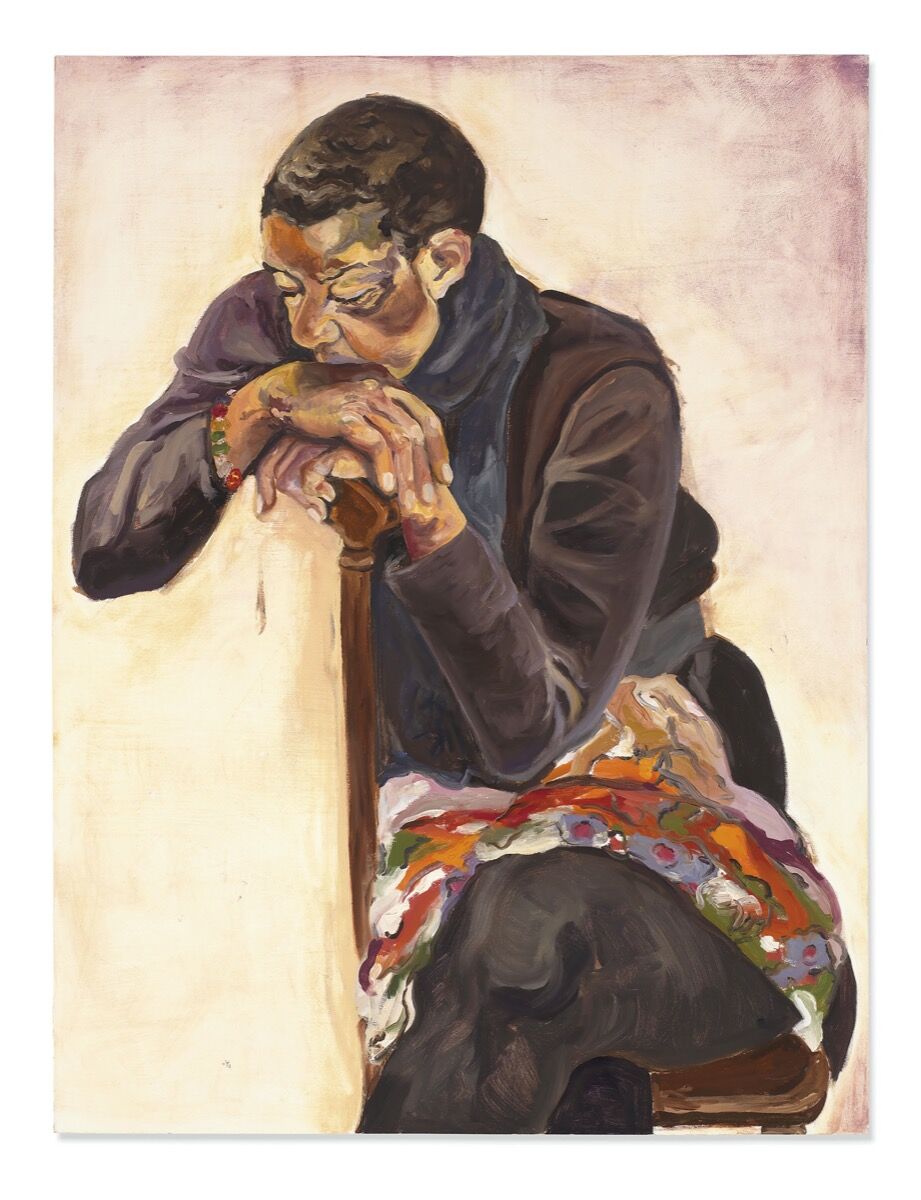 “She made this piece in the dawn of her painting practice, in 2013, before she had a residency, when she was still at Yale; it’s a smaller format and the colors are even slightly more muted than what you see in her work now,” said Paola Saracino Fendi, an associate vice president and specialist in post-war and contemporary art at Christie’s. “But the way she portrayed her mother, that intimate feeling, it was so vulnerable and sensitive. I think people are most interested in the sense of connection in her work.”
The result for Mom more than doubled Casteel’s previous auction record, set by Jonathan (2014) from her “Visible Man” series. Offered at Sargent’s Daughters in the summer of 2014 for a mere $6,000, it sold at a Christie’s sale in May 2019 for $325,000, more than 54 times its original price. The painting is now hanging at the New Museum, on loan from former Disney president and Creative Artists Agency co-founder Michael Ovitz. 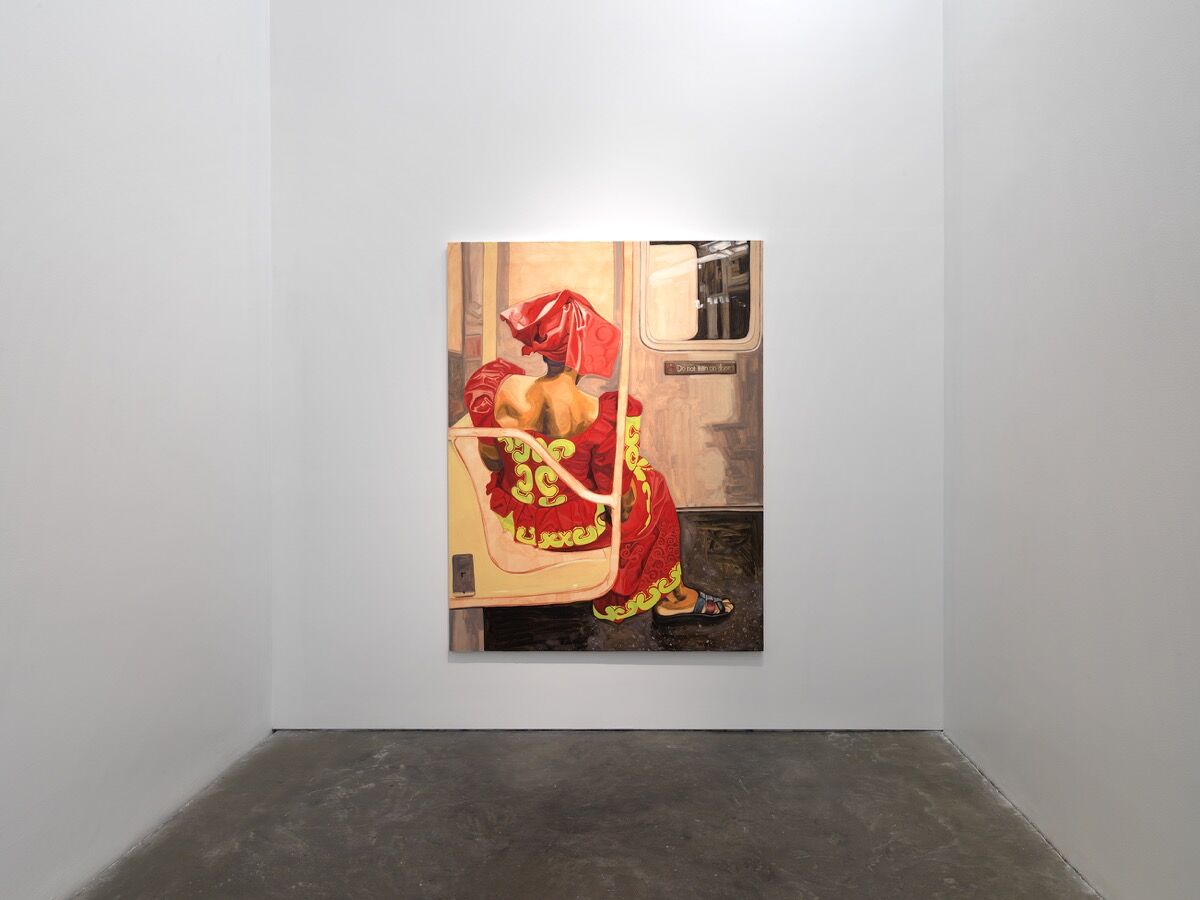 That kind of astronomical increase in value—especially for work by an artist in her early thirties—can raise concerns about market speculation and its possible negative effects on an artist’s career in the long run. Several artists whose work was swiftly bought and sold at the height of the Zombie Formalism craze in the early 2010s have seen their careers stagnate since. But many feel that Casteel has achieved a level of support from dealers, collectors, curators, and institutions that will protect her from such a backlash.
“We are very thoughtful about and only include young artists who have a robust support system and a high market demand,” Fendi said. “There is a great community around Jordan because she has huge figures within the art world that are really promoting her and talking about her as a major painter of our time.”
LaViola’s prognostication was a touch more cautious, but still resolutely optimistic. “Eventually, of course, everyone has a dip—you can’t stay at the top of the mountain forever,” she said. “But it’s unlikely the dip for Jordan will be especially long or severe. She’s putting in the work.” 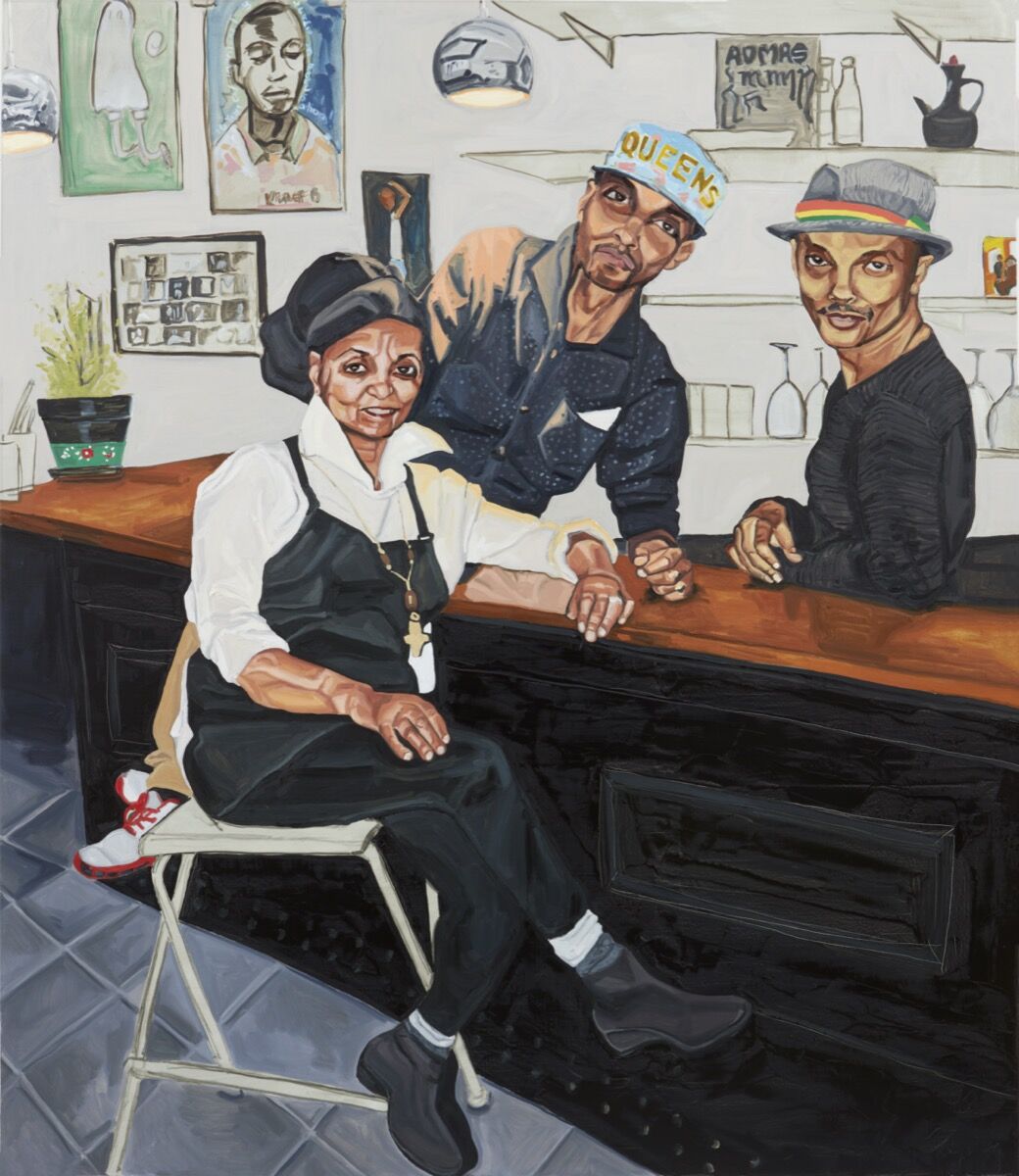 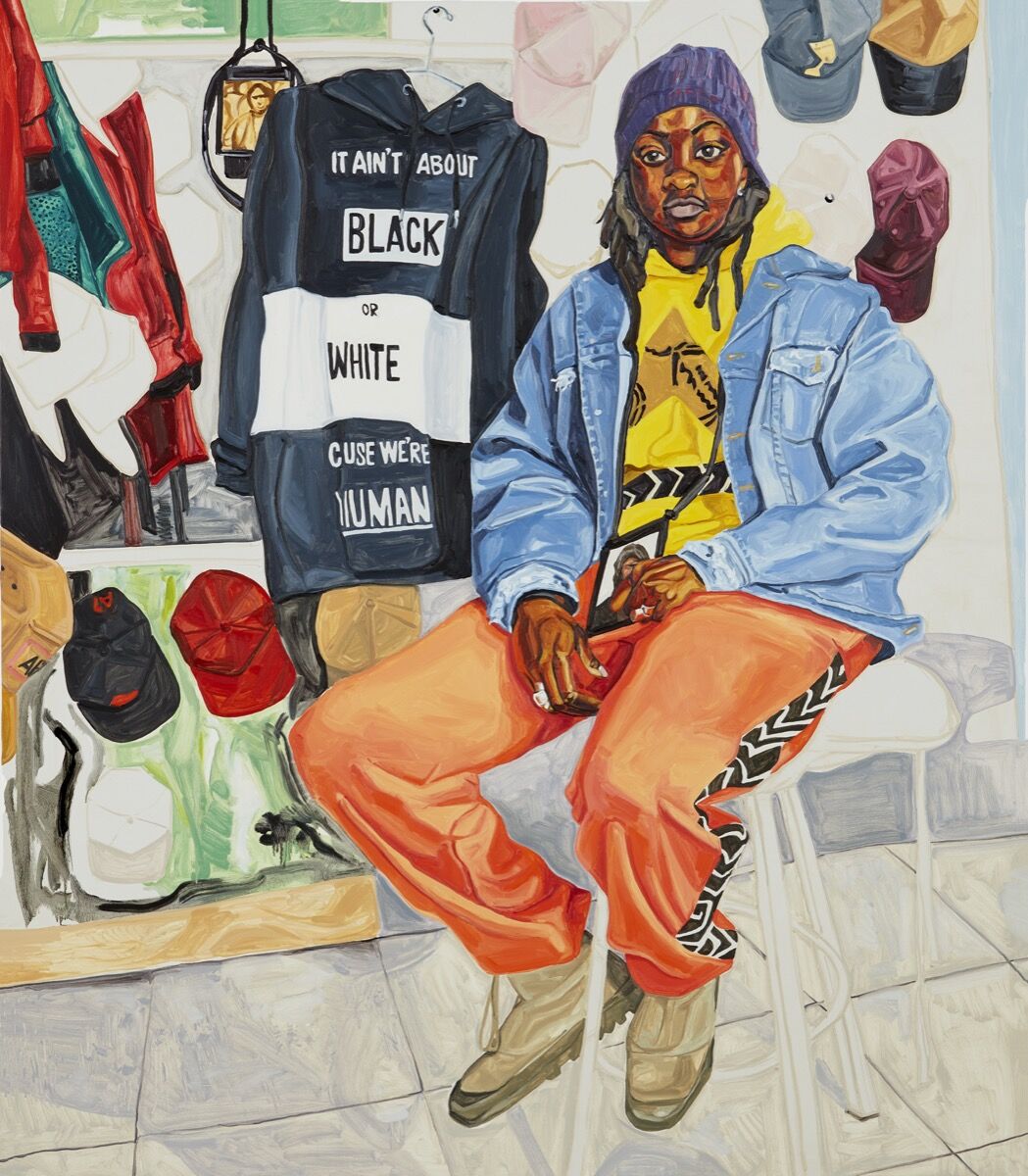 The New Museum exhibition was a resounding testament to Casteel’s ethic and aesthetic (and the support system around her). And though it’s closed until further notice (it was scheduled to run through May 24th), its large-format catalogue powerfully conveys the formidable evolution of her affecting and calmly intense work in the span of just six years.
“We are always expecting artists, particularly African American artists, to have a position about certain topics—which are very much part of Jordan’s work,” Gioni said. “But there is no spectacularization of certain topics or ideas here; there is a sense of quietness that I think is a strength of her work.”
Benjamin Sutton is Artsy’s Lead Editor, Art Market and News.
Related Stories