When
Josef
and
Anni
Albers fled Germany for the United States, in 1933, the New World offered them more than refuge from the rise of Nazism. It also gave them access to one of their chief fascinations: Latin America. “They had gone to museums in Germany and seen the pre-Columbian art, what the Mayan and Incan cultures had done, and loved it,” says Albers Foundation director Nicholas Fox Weber. “That’s what America meant to them as much as anything else.”
Not long after the Third Reich shut down the
Bauhaus
, the avant-garde art school where Josef and Anni had both studied and taught, Josef was fortuitously invited to lead the art department at the newly founded
Black Mountain College
, the North Carolina art school that would soon become a hotbed of modernist experimentation. “When they arrived,” says Fox Weber, “they knew more about Central and South America than the United States.”
For the Alberses, based in North Carolina, Latin America wasn’t exactly next door—but it was close enough. “Josef learned to drive just so they could make the journey to Mexico,” says Jennifer Reynolds-Kaye, who curated “Small-Great Objects: Anni and Josef Albers in the Americas,” which opens at Yale University Art Gallery on February 3rd.

Josef and Anni set off on their first trip to Mexico in 1935 in a Ford Model A. They were accompanied by close friends who would become their frequent travel companions: Ted Drier, a founder of Black Mountain College, and his wife, Bobbie. It was the first of many trips. Between 1935 and 1967, the Alberses traveled to Mexico 14 times by car. Occasionally, they traveled farther, to Peru, staying at boarding houses along the way. “They loved to stock up on supplies at Sears & Roebuck in Dallas,” says Fox Weber.
They also loved to stock up on Mesoamerican objects, which were available in abundance in Mexico in the 1930s and ’40s. Large-scale archaeological excavations were in full swing at pre-Columbian sites like Monte Albán and Mitla in Oaxaca, and Josef and Anni took it all in with tremendous interest, exploring the ancient architecture and documenting their findings, as well as acquiring beloved pieces from marketplaces and merchants.
Over the years, they amassed a collection of around 1,400 objects, ranging from softly molded Tlatlico figurines from 1200 B.C. to 16th-century Aztec pottery shards to antique and modern Mexican textiles. “They started by photographing and visiting museums and sites, picking up a few things along the way, and developing this eye for prehistoric art and textiles,” says Kaye-Reynolds. “Their collecting ramped up as their careers ramped up.” 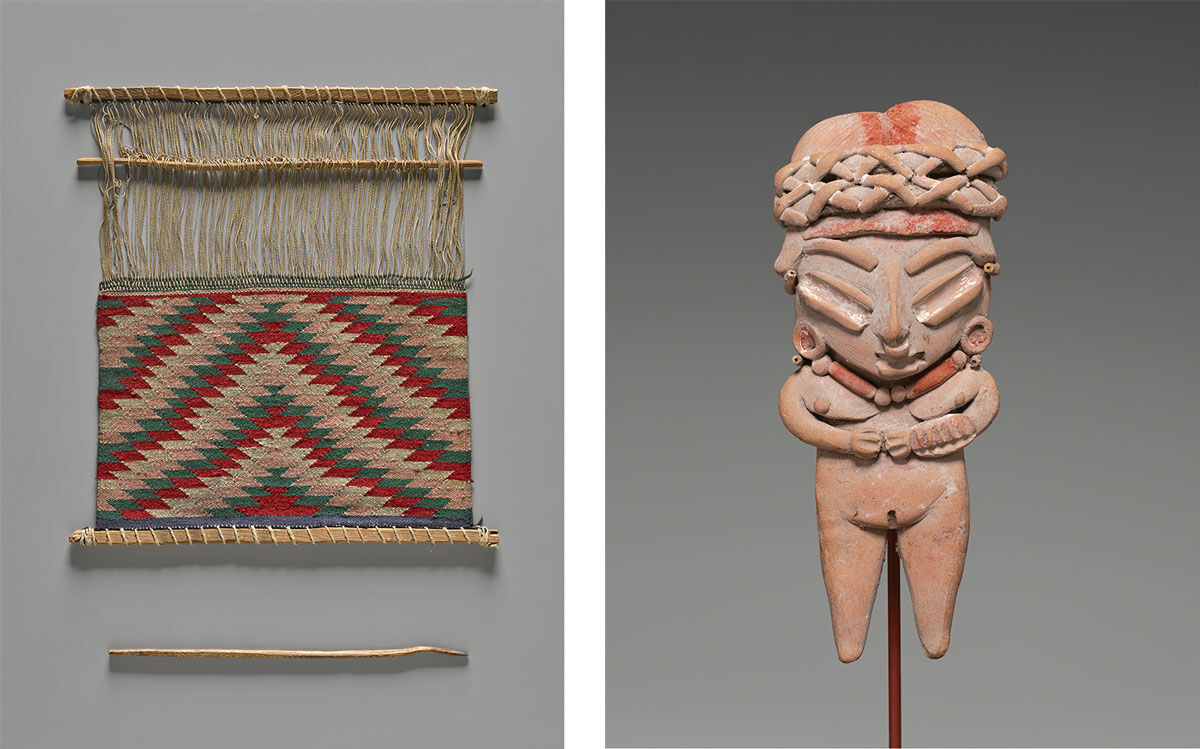 Advertisement
In 1950, Yale hired Josef to head its Department of Design, and the couple moved to Connecticut. With cultural patrimony laws changing and their new proximity to New York, they began collecting more from dealers, and continued to do so for decades.
The exhibition at Yale juxtaposes more than 100 pre-Columbian items from their collection, which now resides in the Yale Peabody Museum of Natural History and at the Josef and Anni Albers Foundation, with examples of their own work, including Josef’s paintings, prints, works on paper, and black-and-white photographs of objects and architecture. It also includes several versions of Homage to the Square—his best-known series of squares within squares, in which he rigorously explored relationships between colors. Anni, one of the 20th century’s greatest textile artists, is well-represented with some of her finest geometric weavings and graphic prints.
The connections between the pre-Columbian objects and the Alberses’ modernist art is clear. Josef’s arrangements of squares and rectangles and Anni’s geometric patterns seem to share DNA with the abstract forms of pre-Columbian pottery and textiles, and with the architectural designs captured again and again by Josef’s camera. “They shared many sensibilities with pre-Hispanic makers,” says Reynolds-Kaye, pointing out the “variability of perception of the foreground versus the background,” for instance. “The colors also had a big impact on them,” says Fox Weber, referring to a “piñata” palette in some of Josef’s “Homages.” 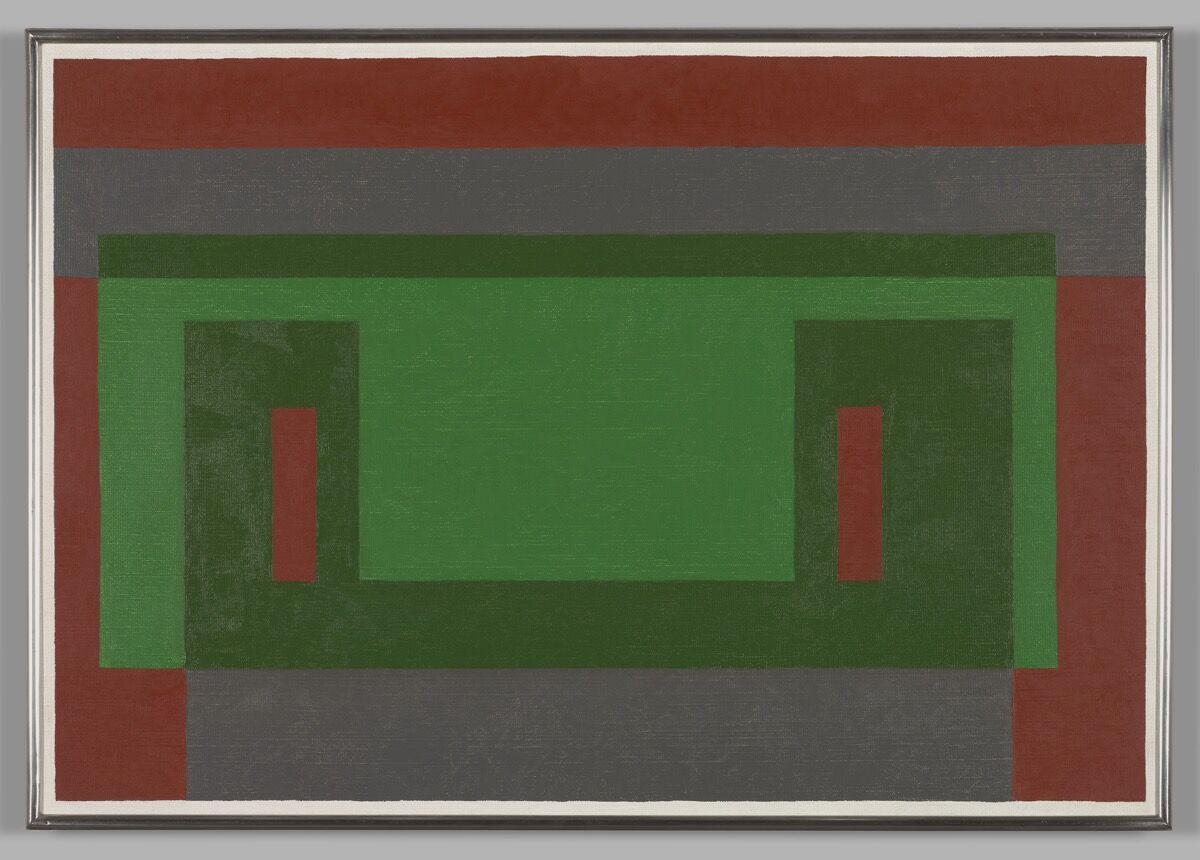 While it’s easy to understand how the Alberses, staunch abstractionists, would have felt an affinity to these ancient, non-representational aesthetics, their obsession with small clay and stone figurines is a bit harder to fathom. But as Reynolds-Kaye explains, it wasn’t so out of character. They valued an economy and purity of form, after all, and the figures were powerful despite their simplicity and size, expressive without superfluous details.
Josef and Anni long advocated for the kind of “truth to materials” that pre-Columbian makers practiced, Reynolds-Kaye explains. “Ceramic acting like ceramic, threads and paint acting like threads and paint.” The Alberses didn’t appropriate from these forms in the way that some other European modernists borrowed from primitive art at the time. Rather, says Reynolds-Kaye, “they rejected the idea of them as primitive and saw a real kinship with these ancient artists.” Case in point: Anni learned from local craftswomen how to use an ancient weaving device called a backstrap loom, and then taught the technique to students at Black Mountain College. 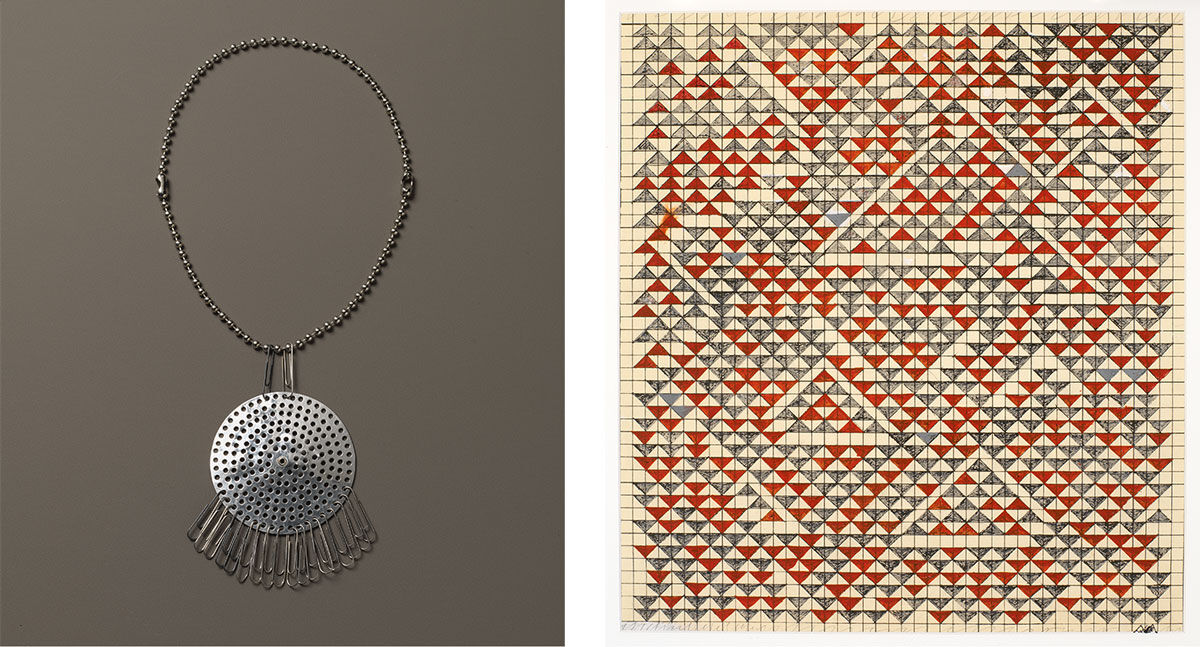 But they also felt a strong kinship with the contemporary culture of Latin America, says Fox Weber, who first met the Alberses in 1971, while an art history graduate student at Yale. “For the Albers, art and the visual had to be everywhere in your life, and in Mexico, art was everywhere,” he says. “They felt that people there were living with visual flair, even if they were living in simple huts—the jewelry that women wore, the serapes, the blankets, the earthenware pottery. They just felt that it was the most natural thing in the world in Mexico to make the visual environment beautiful, which was the dream of the Bauhaus.”
Meredith Mendelsohn
Related Stories