Up and Coming: Joshua Citarella Is the Ultimate New York Freelancer 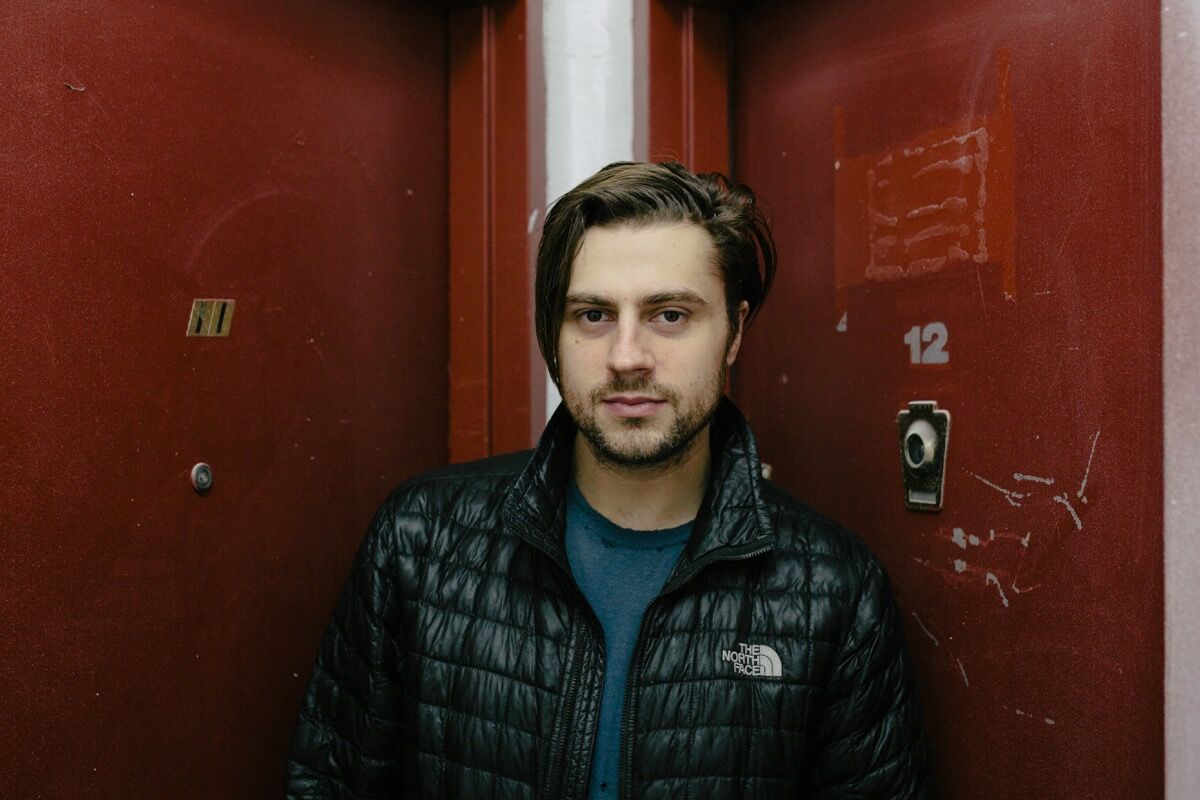 Portrait of Joshua Citarella in New York by Daniel Dorsa for Artsy.

In the year 2025,
Joshua Citarella
isn’t doing so well. Donald J. Trump has just rounded out his second term as President, and the world is a mess—half under water, with basic services nonexistent, and with only the 1% able to afford efficient transportation that avoids the floods (via Uber-esque helicopters, naturally). Meanwhile, Citarella sits in his unnaturally cramped micro-studio, surviving on potatoes and dried lentils while waiting for coveted freelance assignments to arrive via an ultra-high-speed internet connection.
Let’s be clear: This is only one possible future, the artist’s conjuring of what an “anarcho-capitalist” America might look like. It’s the subject of SWIM A Few Years From Now, a 12-by-8-foot photographic triptych that Citarella will debut with London’s Carroll / Fletcher at this year’s Armory Show. The image—a canny blend of analog photography and digital trickery, with many images borrowed from the internet—has the slickness of a dystopian IKEA catalog spread. 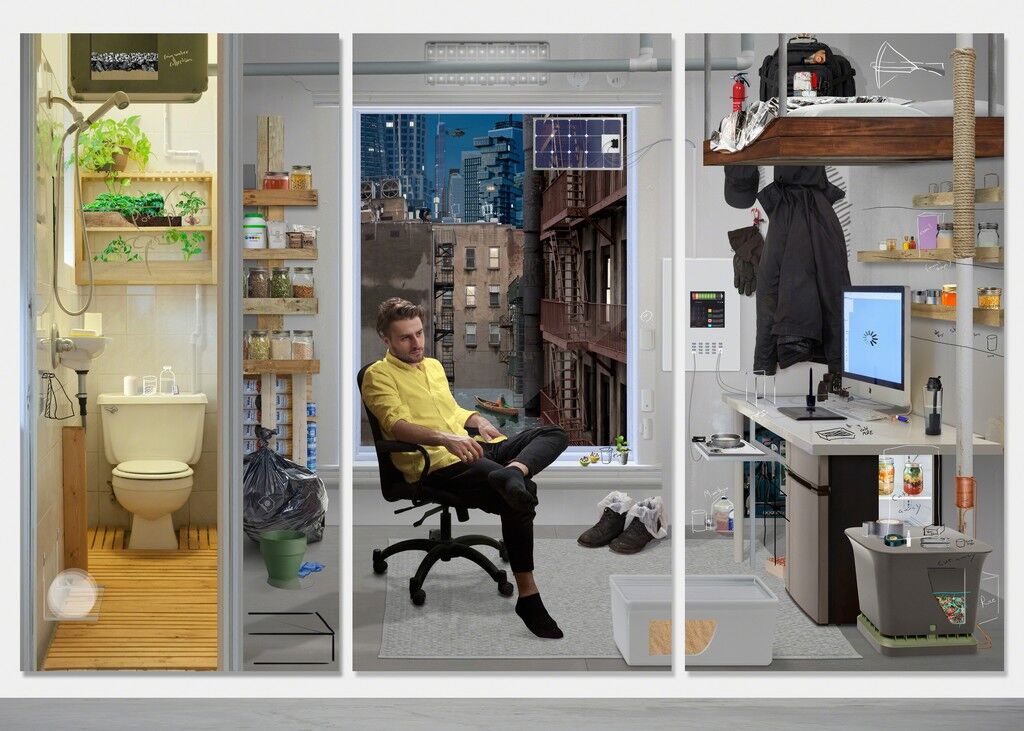 Joshua Citarella
SWIM A Few Years From Now, 2017
Carroll / Fletcher
The piece recalls
Josh Kline
by way of
Jeff Wall
and
Rodney Graham
, a departure in style for the 30-year-old Citarella. In the past, his altered photographic works have often focused on abstract textures or found images, imaginary structures built from sampled digital textures, and vibrant rainbow gradients. But SWIM A Few Years From Now is the logical summation of his practice (and professional life) thus far.
Like many artists of his generation, critical success hasn’t translated into a steady paycheck, and Citarella has instead supported himself through a variety of freelance and temporary gigs. He has photographed exhibitions for New York galleries and works night shifts, retouching commercial images that are then bounced to Bangladesh for further tweaks.
These odd jobs often make their way back into Citarella’s artistic practice. He follows a ‘waste not, want not’ philosophy not dissimilar to the survivalist-inspired protagonist of SWIM, whose claustrophobic existence depends on solar power and food grown in his bathroom. 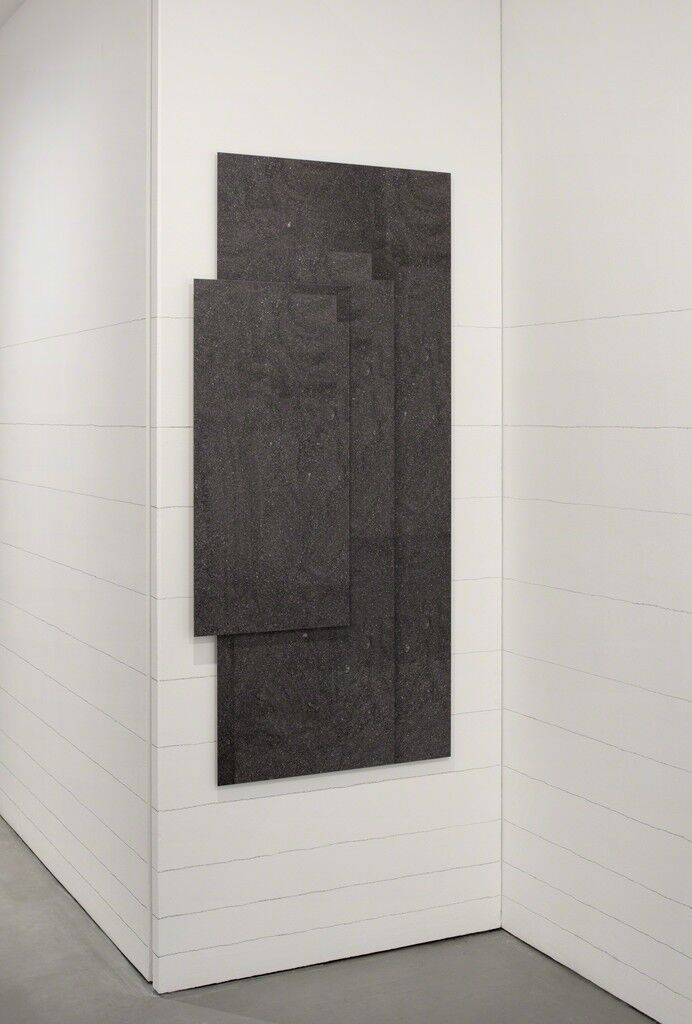 Joshua Citarella
Multiplied Coltan III, 2016
Carroll / Fletcher
Advertisement
His series of “Fashion Paintings” (2016) are, in fact, the residue of a fashion-photography commission for the magazine Out of Order. The images are removed such that only the digital brushstrokes from Citarella’s retouching remain. A likeminded series, “eCommerce drawings,” performs the same operation with product images that Citarella was paid to improve or adjust for unnamed corporate clients; without the actual product visible, they look like bleached, ghostly traces of an object or incident.
“Nothing there is a pixel that has passed through a camera,” he says of these artworks that result from his commercial freelance assignments. “It’s the most simple, elegant way to show the digital workflow on top of photography. It’s making the labor visible.” Citarella characterizes himself as a bit of an idealist in hoping that the works will lead those viewing them to look more closely at the images that surround and are marketed to them every day—to look for the retouching marks, “the gestural paintings that have been on top of every photograph for the last 30 years.” 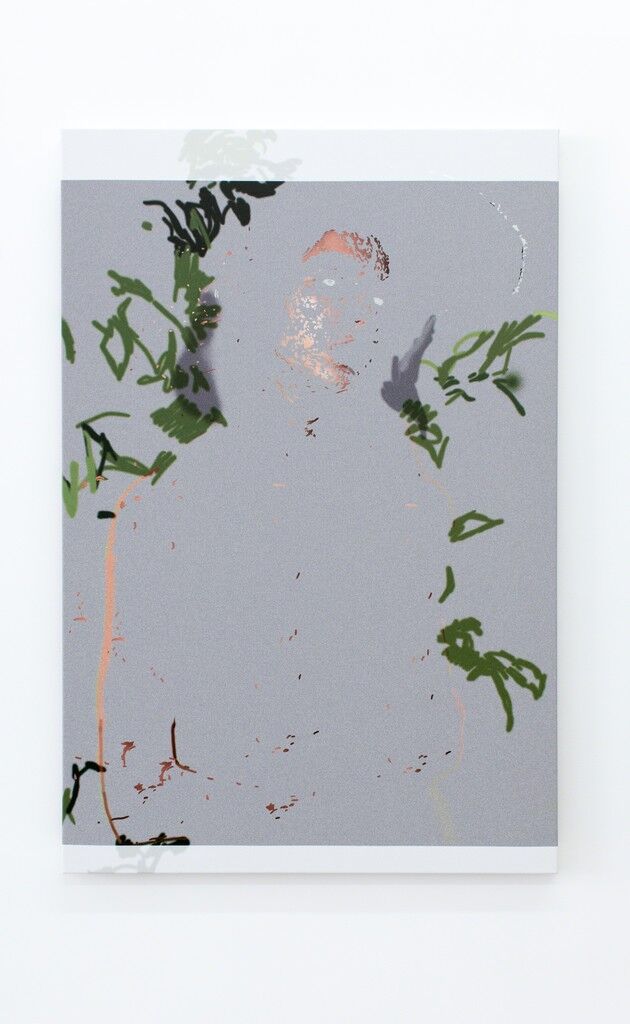 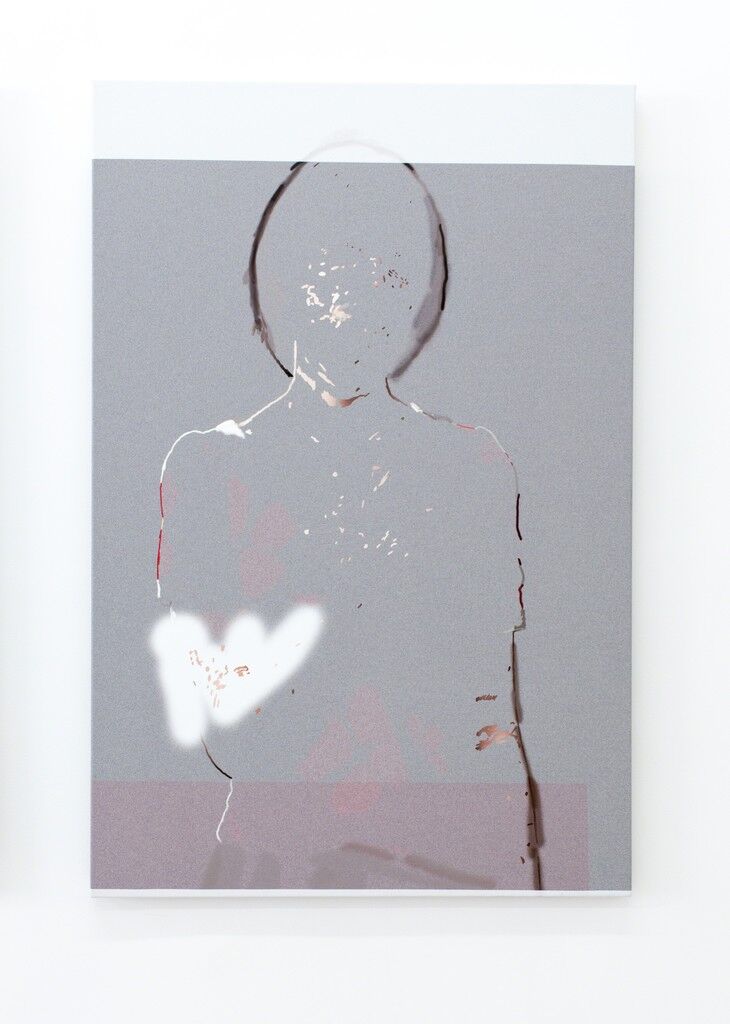 Joshua Citarella
Fashion Painting VII, 2016
315 Gallery
Citarella honed his chops at the School of the Visual Arts in New York, entering his program at the moment when the photography department was transitioning from darkrooms to desktops. As a result, he got a taste of both—though, he says, the tools and tricks of Photoshop had captured his heart since middle school. “At that point I’d been using the software as long as my professors,” he says. “It always seemed like the quickest, best way to make pictures, one that I had the most control over.”
After graduation, he fell in with a self-promotionally savvy crowd that, informed by digital culture and advertising and eschewing the highbrow code of the art world, was using the internet to disseminate their work. Ground zero for this new effort was the
Jogging
, whose principal members included
Brad Troemel
, an ongoing collaborator of Citarella’s. Like Troemel—who has shown with Zach Feuer and Tomorrow Gallery in New York—Citarella has navigated the uneasy transition to the white cube. Exhibitions at Higher Pictures in New York and at Carroll/Fletcher proved that his weird meld of photography, sculpture, and digital “painting” could thrive off-screen. 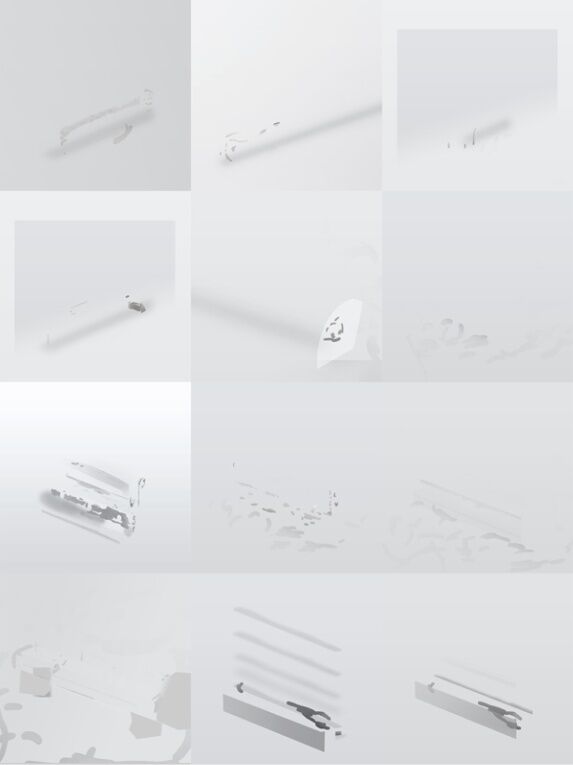 Joshua Citarella
eCommerce Drawing XV, 2015
Carroll / Fletcher
For a 2016 show in London, the artist made drawings on the floor using a sort of sand painted to resemble coltan, a controversial conflict-mineral that is a necessary component in many consumer electronics and has inspired a number of Citarella’s pieces. The pieces look like hieroglyphs—Citarella had crop circles in mind—but they’re actually based on diagrams for a Google-patented, ocean-powered data center to be sited in international waters, away from the prying eyes of the N.S.A.
Despite ongoing success in the art-world proper, Citarella has still found time to pursue the kind of oddball projects that the internet does best. Consider Ultra Violet Production House, an Etsy shop he helms with Troemel, hawking assisted-readymades, like a bulky architectural model of the Triangle Shirtwaist Factory that one can use to disguise an “unsightly” Wi-Fi router. 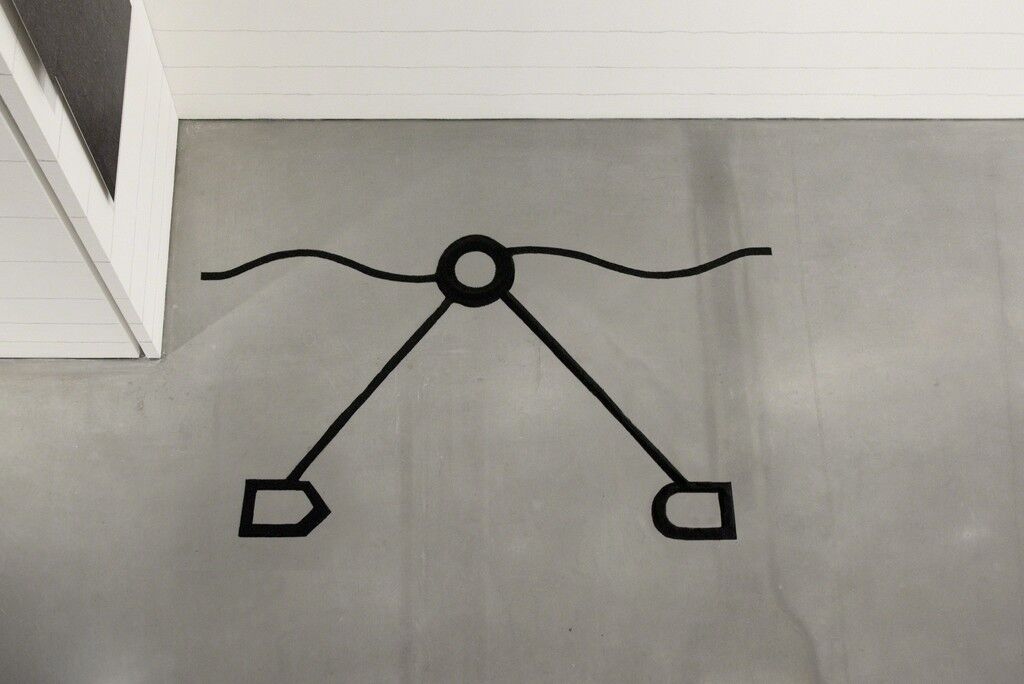 Joshua Citarella
Megastructure I, 2016
Carroll / Fletcher
At the moment though, SWIM is suggesting fresh potentials for the artist, who says that the fictional, future-self-portrait represents “the way I want to work.” He envisions scaling-up similar compositions into many-paneled installations. “This composite photography could expand to fill anything,” he says. “You make enough and you could fill the whole world with pictures.”
Future pieces in this new series, he says, might explore further wide-eyed, quasi-utopian philosophies, “wildly extremist and unfeasible ways of organizing society that are endlessly fascinating as a thing to strive for—or to potentially avoid at all costs.” There’s anarcho-transhumanism; anarcho-communism; mutualism. Then there are the anarcho-primitivists, a particular interest, and a group that, a la Unabomber Ted Kaczynski, believe that “technology is the root of all evil, and civilization is ecocide.” With some chagrin, Citarella admits that progress has been slow on the latter front: “You can imagine,” he admits, “how hard it is to research these guys on the internet.” The appeal of SWIM—irreverent, and not without a dash of humor—is its immediate accessibility, despite being grounded in deep research and economic theory. Citarella talks exuberantly about the books that have inspired him, including, most recently, Alex Williams and Nick Srnicek’s Inventing the Future: Postcapitalism and a World Without Work (2015). He spends his time watching YouTube videos of teenagers boldly debating the precepts of anarcho-capitalist societies; browsing survivalist websites; and hunting for impermanent jobs, of course, to make ends meet.  “These texts about the precarity of work—I was not just reading it, but living it,” he says.
In the end, Citarella’s image of computer-bound hustle in an undersized apartment is immediately resonant to any struggling freelancer: a bleak cautionary tale of a future in which we beg for random gigs while ocean levels slowly rise. “When the election happened,” he says, “every artist on earth took a moment to think, how do I respond to this?”
Citarella’s own response is pointed, whip-smart, and sickly entertaining; a monstrous vision that feels all too plausible. 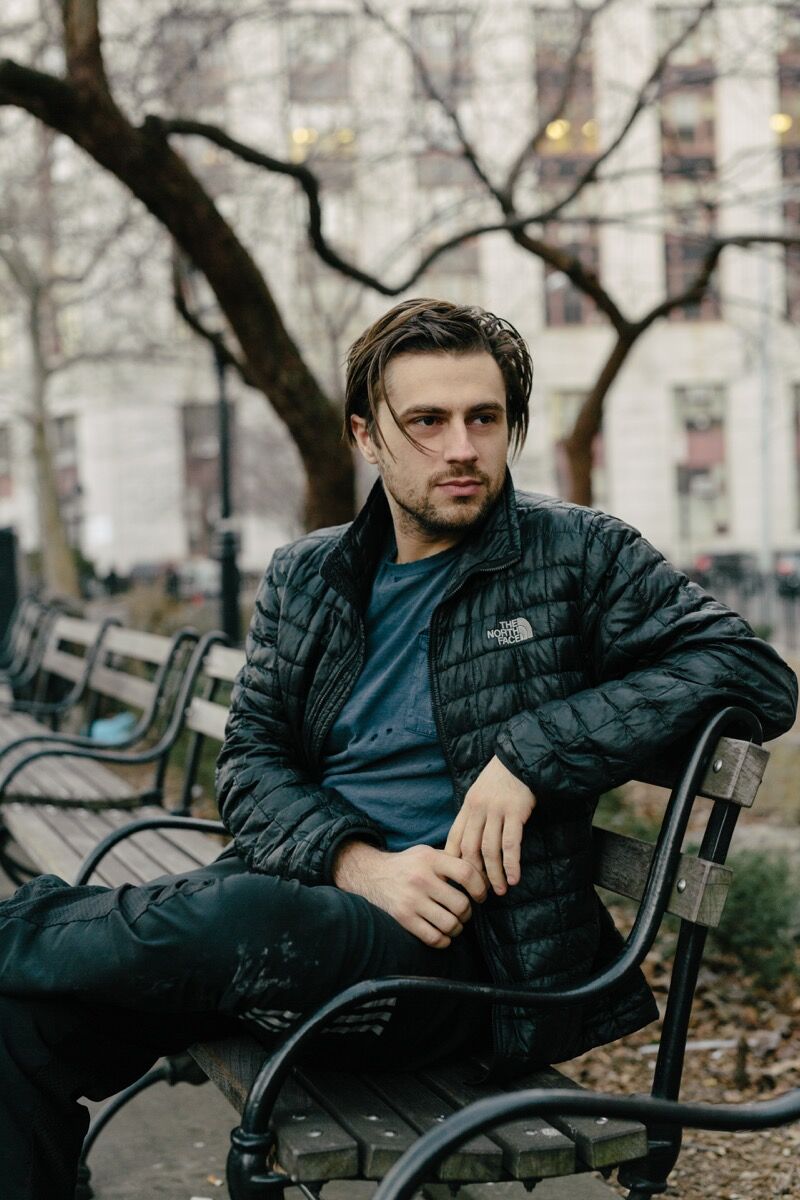 Portrait of Joshua Citarella in New York by Daniel Dorsa for Artsy.