At night and on the weekends, after John Ronald Reuel Tolkien had finished his duties as a professor of literature, a husband, and a father to four children, he would retire to his drawing room and craft the fabled lands of Middle-earth.
J.R.R. Tolkien’s stories The Hobbit (1937), The Lord of the Rings trilogy (1954–55), and the posthumous volume The Silmarillion (1977) were born from the elvish languages that the author created. But equally important to building these narratives were the illustrations and maps he drew to better understand Middle-earth and other lands and seas of Arda, the world he envisioned that predated our own recorded human history. 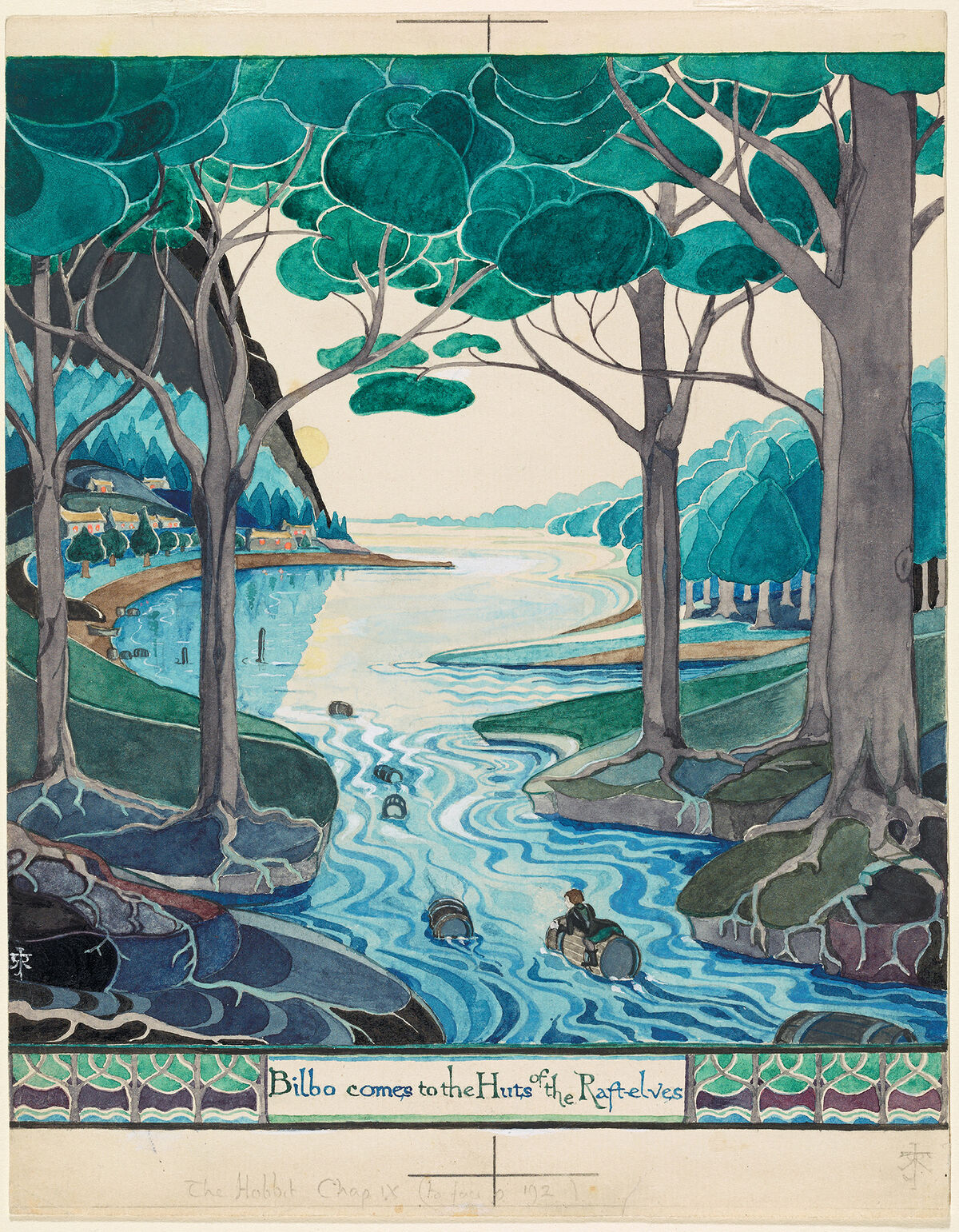 Tolkien’s Middle-earth was not located on another planet, nor in a neighboring timeline, he revealed in letters written in the 1950s, but it lay on the same latitudes as Europe, long ago. “I have, I suppose, constructed an imaginary time, but kept my feet on my own mother-earth for place,” he wrote.
Through watercolor and ink illustrations, Tolkien imagined sunlit, sinuous rivers; snow-capped peaks; and the depths of dragon lairs, all of which needed to be carefully plotted on a map. As John T. McQuillen, Ph.D., curator of “Tolkien: Maker of Middle Earth” at the Morgan Library & Museum in New York, explained, the author began each of his stories with a map, because “the story didn’t create the geography; the geography helped create the story.”
The exhibition, open through May 12th (it was previously shown at the Bodleian Library at Oxford University, where Tolkien was a professor), features a number of artworks from the late high-fantasy author. Though some of his illustrations appeared in the first edition of The Hobbit—such as his pastoral view of Hobbiton-across-the-water, and his mountainous scenes for the book’s dust-jacket design—the original editions of The Lord of the Rings had no room for full illustrations, and many of his works were not available to the public until they were acquired by the Bodleian after his death. (Tolkien’s publisher in the United States declined to publish his dust-jacket art, believing it to be “too British,” according to the exhibition catalogue.) Advertisement
Tolkien began his art practice in his youth; he learned how to draw and paint from his mother, and later, at school. In the 1910s, during his undergraduate years at Exeter College, Tolkien filled pages of his sketchbook with abstract settings from a technicolor fairy world, places redolent of Middle-earth. He sketched “distant mountain landscapes, or paths through dark forests,” McQuillen described. “That kind of imagery was so embedded in who he was. It comes out later in the stories.”
His first illustration that was directly related to Middle-earth, The Shores of Faery, dated May 1915, depicted Kôr, the city of elves in Valinor. A poem opposite the watercolor heralds the first appearance of Eärendil, a character in The Silmarillion, who finds the city abandoned by the gods. “It’s a beautiful drawing…but it’s also great to see the birth of Middle-earth,” McQuillen said. Being able to see that “initial moment,” he added, is “rare.”
Tolkien’s drawings weren’t limited to places in far-flung worlds or distant eras, however. He sketched nature prolifically and made artworks for his children. For example, he made a drawing of an owl for his son, Michael, to assuage the boy’s fears from a recurring avian nightmare, as well as yearly illustrated letters from Father Christmas. He was committed to his family, only turning to hobbits, elves, wizards, and orcs in his spare time. “This was not his main line of work, and he always felt guilty for taking time away from his academic duties and his children to work on his so-called ‘fairy stories,’” McQuillen said. 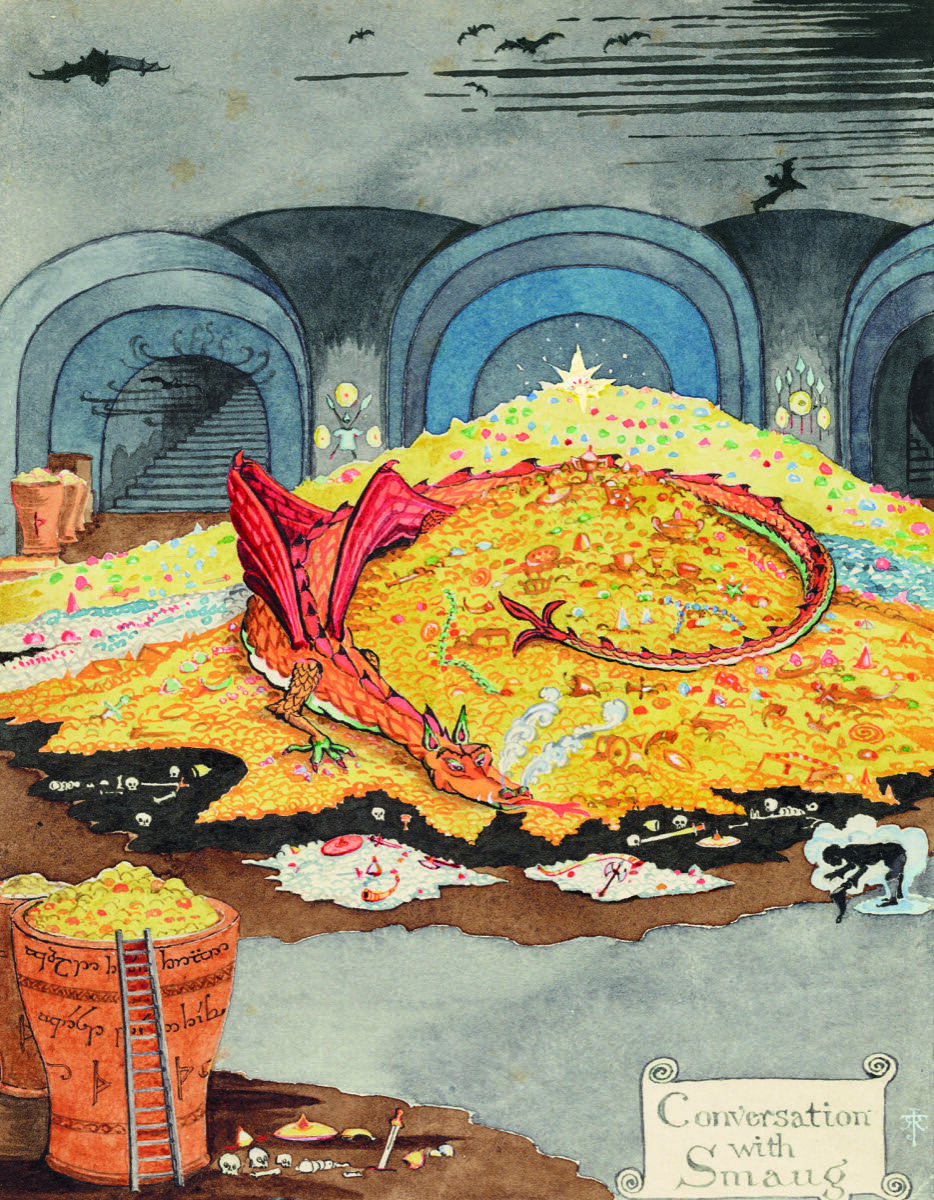 But even so, Tolkien was still a prolific author and artist, though he never considered himself to be the latter. “It’s funny because he never thought much of his drawings, and in typical Tolkien and maybe British fashion, always disparaged them as not too good or of high quality,” McQuillen explained. But that doesn’t mean they weren’t an integral part of his process. “As he was writing the story, he would draw the scenes to help him create the textual description…and, in turn, what he was writing would inform his illustrations.” Tolkien conceptualized The Hobbit with a single opening line—“In a hole in the ground there lived a hobbit”—accompanied by his rendition of Thrór’s Map, which the protagonists would follow on their quest (and for a couple of years, McQuillen noted, that was as far as Tolkien got).
Likewise, Tolkien’s early poem about Eärendil and the deserted elven city also showed that he regarded both sides of his practice equally. “[It’s] important that it’s a poem and an illustration together,” McQuillen said. “It sets the stage for everything, that for him the visual and the textual [went] hand in hand.”
Jacqui Palumbo is a contributing writer for Artsy Editorial.
Related Stories