Judy Chicago
likes to play with fire. Most of us know her as a fierce ringleader of the 1960s feminist art movement, in which she pushed back against the patriarchal establishment. “The biggest compliment you could get back then was ‘You paint like a man.’ Can you believe that?” she tells me over the phone with her usual frankness. “Now if someone tried to say that to me, I’d probably kick them in the balls!”
Chicago did pick at least one fight with a male artist in the early years of her career. She wasn’t a fan of
Richard Serra
’s 1970 show at the Pasadena Art Museum (now the Norton Simon Museum), in which he cut down Redwood trees and piled them up in the gallery. A squabble between the two ensued: “I was and am horrified by the masculine built environment and the masculine gesture of knocking down trees and digging holes in the earth,” she says.
But instead of letting her reaction to the work fester, she channeled it into her own art practice—into fireworks, to be exact.
In 1968, several years after she graduated from the MFA program at UCLA, Chicago had begun a series called “Atmospheres.” In the first iteration, she used smoke machines to cloak a Pasadena street in a shroud of ethereal white mist. “It softened everything,” she recalls of the vapor’s effects. “There was a moment when the smoke began to clear, but a haze lingered. And the whole world was feminized—if only for a moment.” 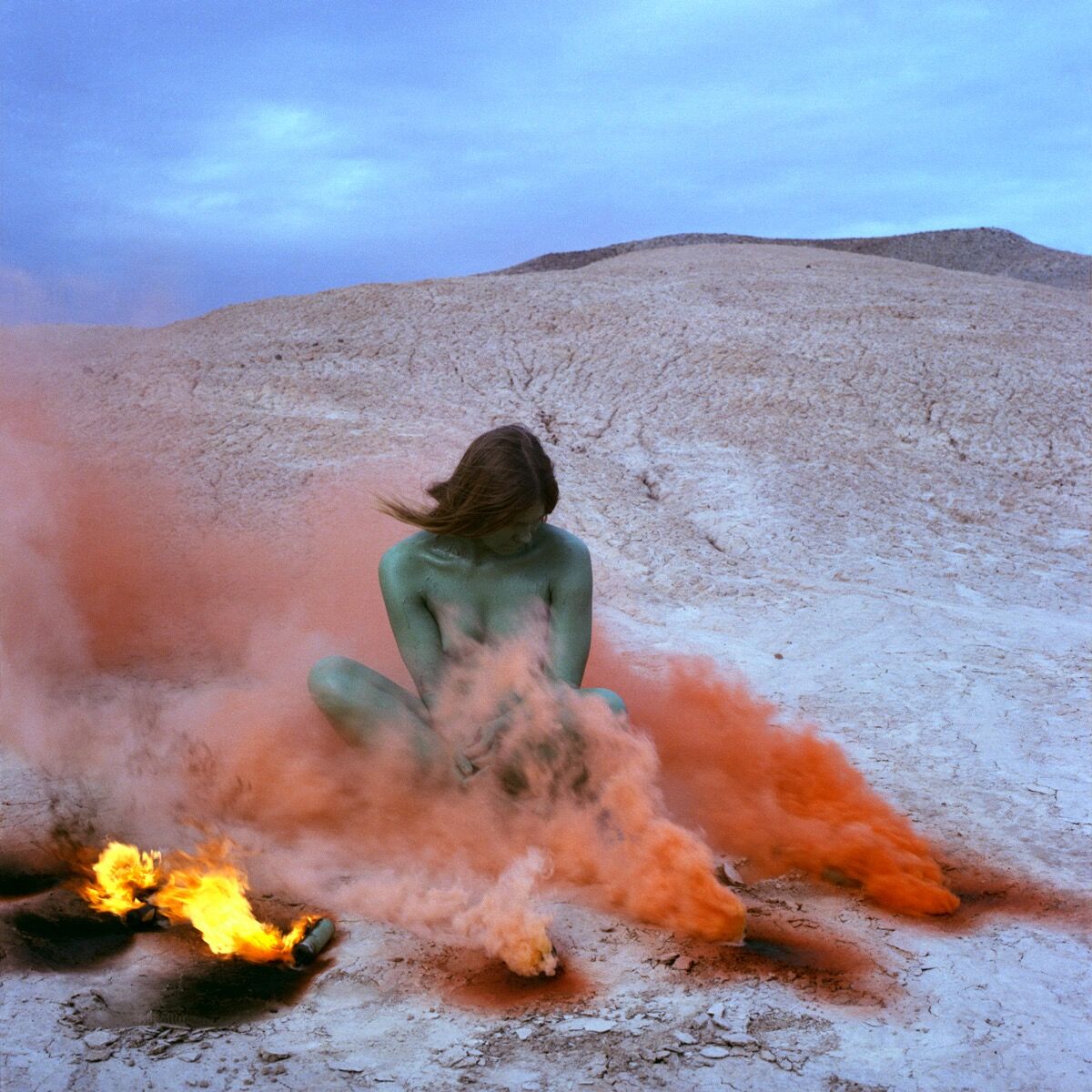 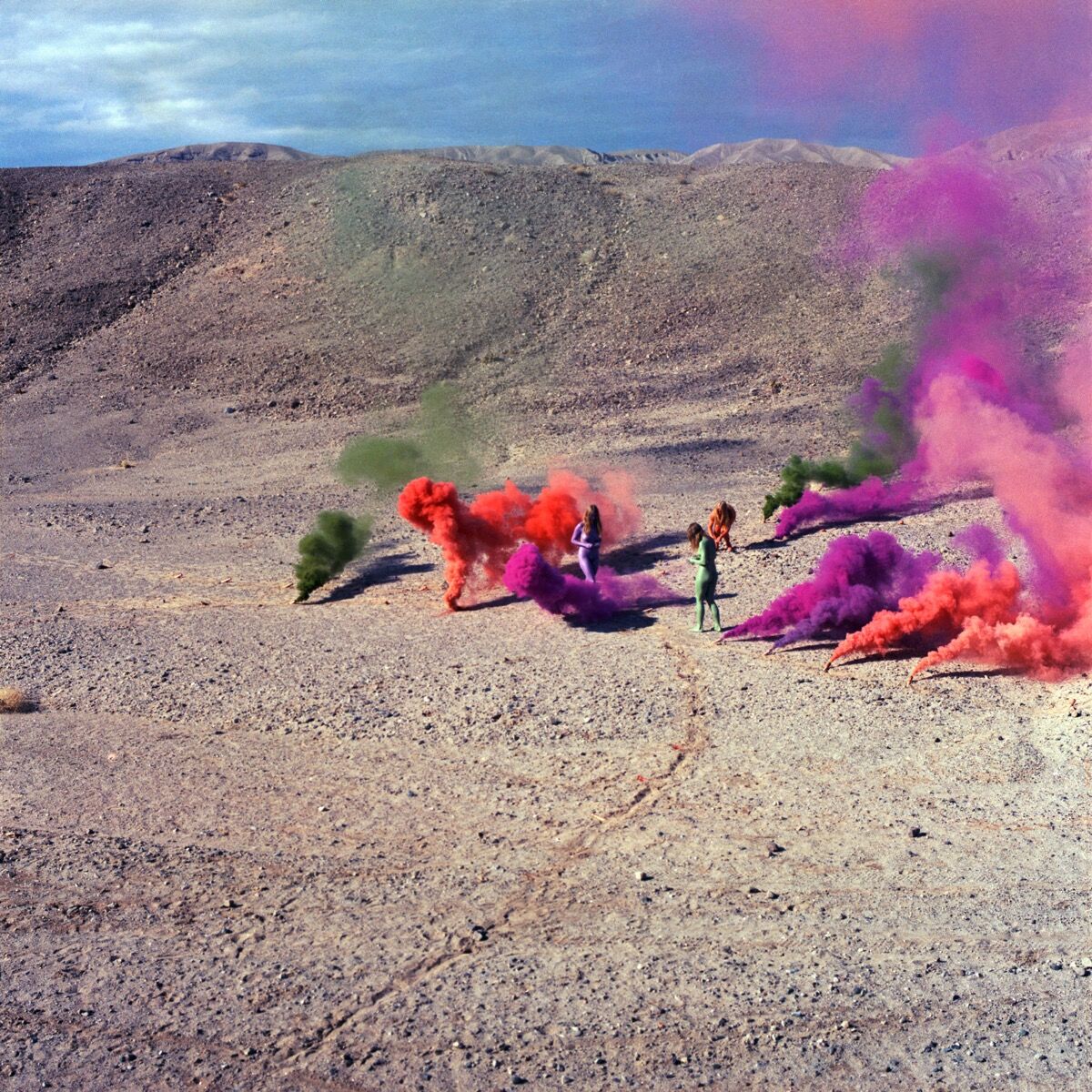 The piece set off the artist’s interest both in feminizing the male-dominated atmosphere around her and in pyrotechnics. At the time, as a young female artist, Chicago struggled with what she describes as “the macho art scene of southern California.” She wanted to “soften that macho environment,” she explains.
And when she looked up into the sky and saw diaphanous light filtered through mist, an idea struck her. “I thought, ‘I’m going to do fireworks.’”
In the early 1960s, Chicago was surrounded by the work of artists who would later dominate the Land Art movement, like
Michael Heizer
and
Robert Smithson
. She was also rubbing elbows with participants in the
Light and Space
group, all of whom were men. She met
James Turrell
when he was just 25, and
Robert Irwin
came to her graduate show at UCLA.
As a wall label from her 2014 retrospective at the Brooklyn Museum remembered: She “[hung] around with male artists at the bar Barney’s Beanery and adopt[ed] their tough-guy attitudes; she repressed imagery that directly referenced her gender.”
But the approach didn’t sit right with her. “I had an inherently different sensibility, which has to do with touching and merging with and sensitivity to the environment,” she explains. By the late 1960s, she began to move away from the group and their penchant for power tools, “Finish Fetish,” and physical alterations of the land (like felling trees). 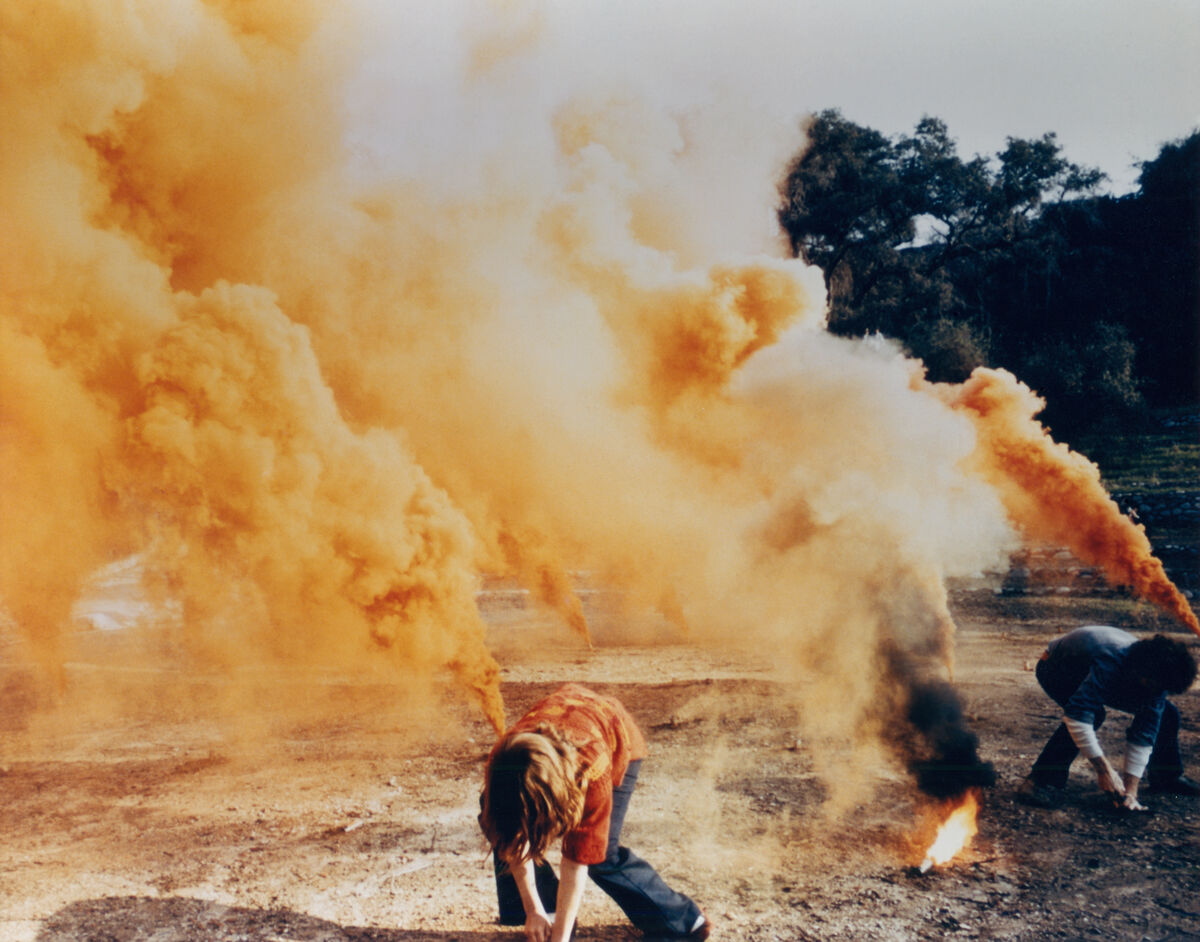 Advertisement
Through an apprenticeship with a pyrotechnics company, Chicago learned to set off fireworks herself. She’d always had an interest in the emotional resonance of color, and she began to experiment with tinted smoke. In 1968, she filled Los Angeles’s Brookside Park with ethereal orange clouds (Orange Atmosphere). In 1969, she took the series to the beach in Santa Barbara, where she ignited sublime billows of purple mist (Purple Atmosphere #4). They diffused into the sea air, seeming to rise over the ocean.
Unlike the actions of some of her male peers, Chicago’s interventions in the natural world didn’t involve any destruction of the landscape. Rather, they softened it and highlighted its beauty. At times, the smoke acted like a curtain, slowly lifting to reveal the stunning landscape behind it. At others, it curled across the environment’s curves and grooves, emphasizing its elegant and varied contours.
But when Chicago began to bring her “Atmospheres” into the built environment, their meaning shifted: They became more aggressive. When the Santa Barbara Museum of Art commissioned a piece, Chicago exploded orange and yellow smoke along a strip of the museum’s concrete wall. “It looked like the museum was on fire. I loved that,” she remembers. “Because, of course, museums were not exactly hospitable to women artists.” The flares scarred the wall with permanent black marks.
As the series developed, Chicago introduced female performers into her interventions. In her 1972 “Atmospheres,” women whose nude bodies were painted purple, orange, and green mingled with clouds of the same colors. Surrounded by a spectacular desert landscape, they resembled goddesses in the throes of a ritual that honors Mother Earth. These goddess images, as Chicago sometimes refers to them, introduce a theme that she would later explore in her most famous piece, The Dinner Party (1974–79). In both works, she addressed the oft-neglected fact that “all ancient civilizations worship goddesses,” she says.
Notably, the women in Chicago’s performances were her students in the country’s first-ever feminist art program, which she established in 1970 at Fresno State College, now the California State University at Fresno. “There, I was helping young women find a way to make art without having to do what I had to do in my first decade of my professional practice, which was distance myself from my gender,” she explains.
There is an element of sacrifice in some of Chicago’s late “Atmospheres”  that mirrors the frustration she experienced in her early days as an artist, when she felt forced to suppress any femininity in her work. In Immolation (1972), a woman sits in the middle of burning flares that emit deep orange smoke. “That was also a reference to sati, the practice where women are pushed into the bonfire in India when their husbands die and are cremated,” Chicago explains of the work.
In the mid-1970s, Chicago stopped making “Atmospheres.” They became too expensive for her to produce on the meager income she was making. She also describes having been sexually harassed by the owner of the fireworks company where she apprenticed, which brought her education in pyrotechnics to an end—at least temporarily. 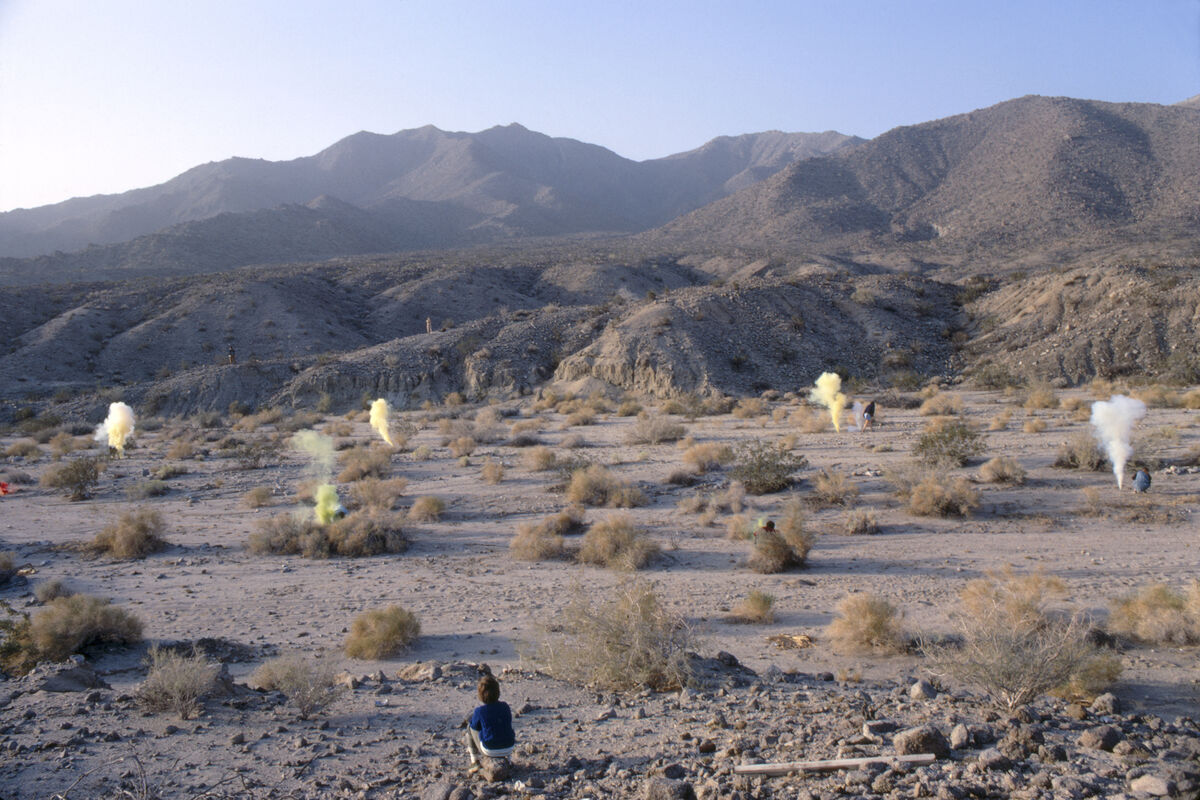 Over the past five years, as institutional interest in both early California art and
Feminist art
has steadily grown, Chicago has again returned to the series. As part of L.A.’s sprawling, multi-venue series of exhibitions about California art known as “Pacific Standard Time,” launched in 2012, The Getty commissioned her to create a new fireworks piece, Sublime Environment.
The same year, curator Philipp Kaiser and art historian Miwon Kwon included a photo of Immolation in their Land Art survey “Ends of the Earth: Land Art to 1974” at MoCA Los Angeles. “It was the first time anybody realized that while the guys were carving up the landscape, I was feminizing it, and softening it,” Chicago says.
In recent months, after finding a new colored smoke source in China, Chicago has begun to work on another “Atmospheres” piece. She’s not revealing the full details just yet, but she has big ambitions for it. “I’m thinking the Grand Canyon,” she says, laughing. “Wouldn’t that be incredible? Actually, I had that idea in the ’70s, but there was no way I could get the kind of support needed to execute that back then.”
These days, thanks to the increasing interest in the feminist art movement that Chicago helped to forge, she might just be able to realize it. “Imagine,” she says, “filling that space with feminist smoke.”