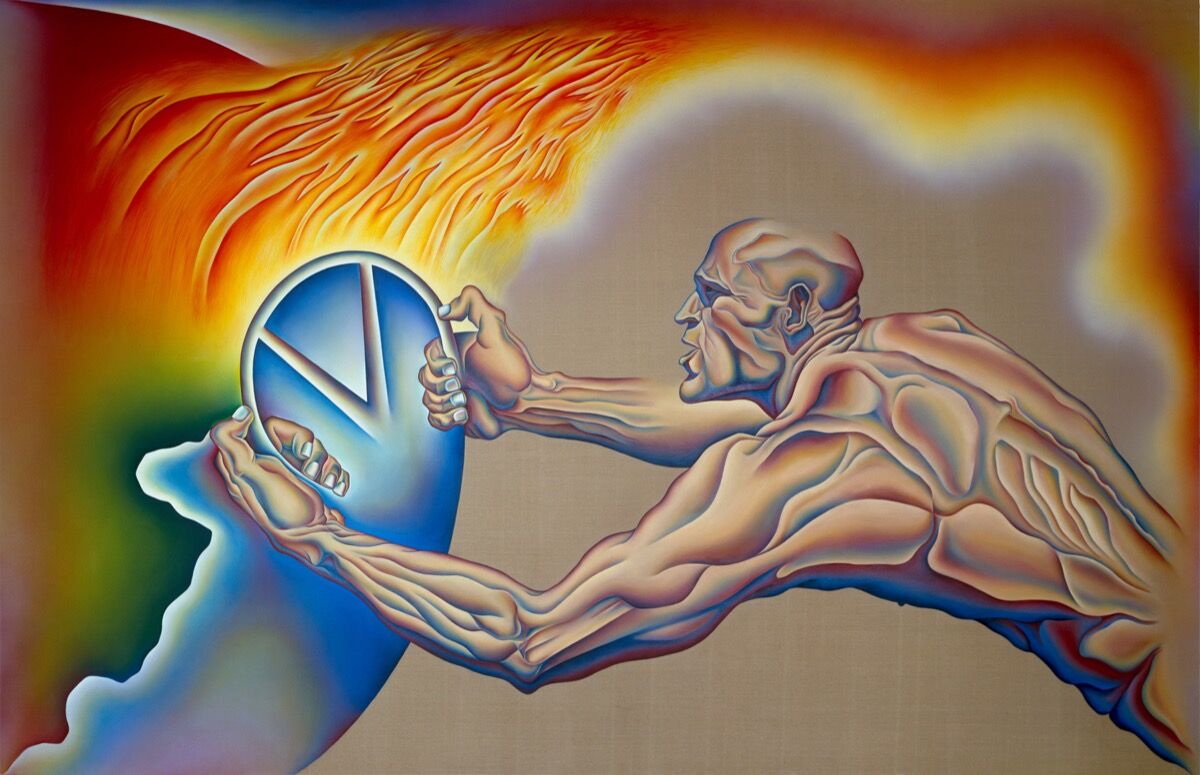 For the most part, the public rewards artists who get good at one thing and stick to it. The name
Georgia O’Keeffe
instantly conjures paintings of flowers and desert landscapes.
Mark Rothko
brings heavy, colored squares to mind. On the other side of the spectrum are artists who make huge stylistic leaps throughout their careers. For example,
Philip Guston
: After working for decades in gestural abstraction, he began painting cartoonish figuration that critics initially despised. Humans like to categorize; it’s easier to consider an artist’s singular aesthetic than it is to wrestle with a sprawling body of work.
It’s no surprise, then, that it’s taken a while for the public to come around to
Judy Chicago
. Over the past six decades, she has made
Minimalist
sculptures, psychedelic paintings, and vulva-shaped ceramics, as well as performances, textiles, and drawings. Walking through the Institute of Contemporary Art, Miami’s newly opened survey of Chicago’s work, I began judging each piece individually—some I liked (early Minimalist sculpture), some I didn’t (the later drawings). Considering the entire show, though, I started to really admire just how many risks Chicago took throughout her career. Moving fearlessly from one medium to the next, she variously transposed her feminist concerns onto clay, canvas, and looms. After all, there are infinite ways to be a woman, an artist, and a feminist. The Chicago survey is a buffet of identities and modalities. Why not embrace this multiplicity, the artist seems to ask, and fill your plate? 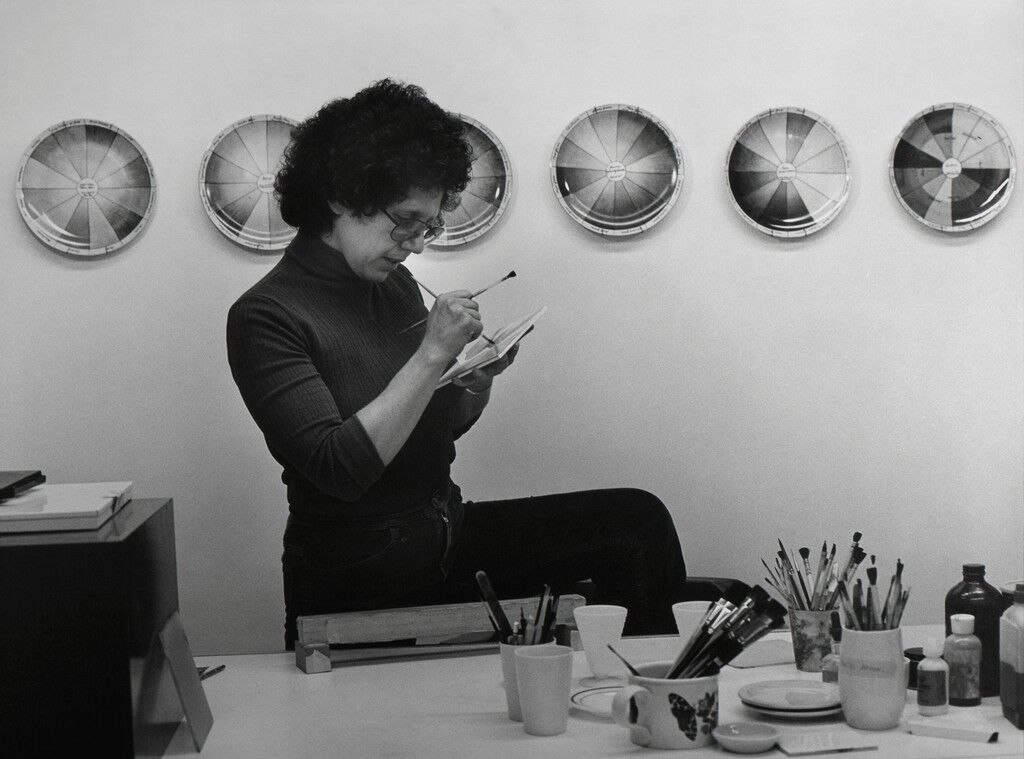 Judy Chicago
Judy Chicago in “The Dinner Party” China Painting Studio, 1975
Brooklyn Museum
Yet it’s not fair to say that Chicago hasn’t already received significant recognition. Her iconic 1974–79 installation The Dinner Party was a hit when it debuted at the San Francisco Museum of Modern Art in 1979. Over the next nine years, the piece toured the U.S., Canada, Scotland, and Germany (it’s now on permanent view at the Brooklyn Museum). The Dinner Party consists of banquet tables arranged in a triangle, lined with place settings for 39 of the most famous women throughout history and mythology: Sojourner Truth, Sappho, Eleanor of Aquitaine, Sacajawea, Virginia Woolf. Each guest gets her own goblet and individual plate, which all suggest female reproductive organs. In all, the artwork is a potent celebration of female leadership, communion, and sexuality. The ICA Miami survey includes test plates affiliated with the series, but ensures that they’re not the show’s centerpiece: The curators have situated them off to the side.
The survey starts with two Minimalist sculptures from the 1960s. Sunset Squares (1965/2018) comprises four standing square frames, canvas-covered plywood painted in pastel hues. Trinity (1965) consists of three upside-down V-shaped forms (latex paint on canvas-covered plywood) in red, orange, and yellow. Jewish Museum curator Kynaston McShine included one of Chicago’s works from this era in his groundbreaking 1966 show “Primary Structures”—she was one of only three featured women, along with
Anne Truitt
and Tina Matkovic Spiro. The exhibition established a roster of the day’s most important Minimalist sculptors. Alongside works by
Donald Judd
,
John McCracken
, and
Carl Andre
, Chicago’s sculpture placed her at the forefront of a burgeoning movement. 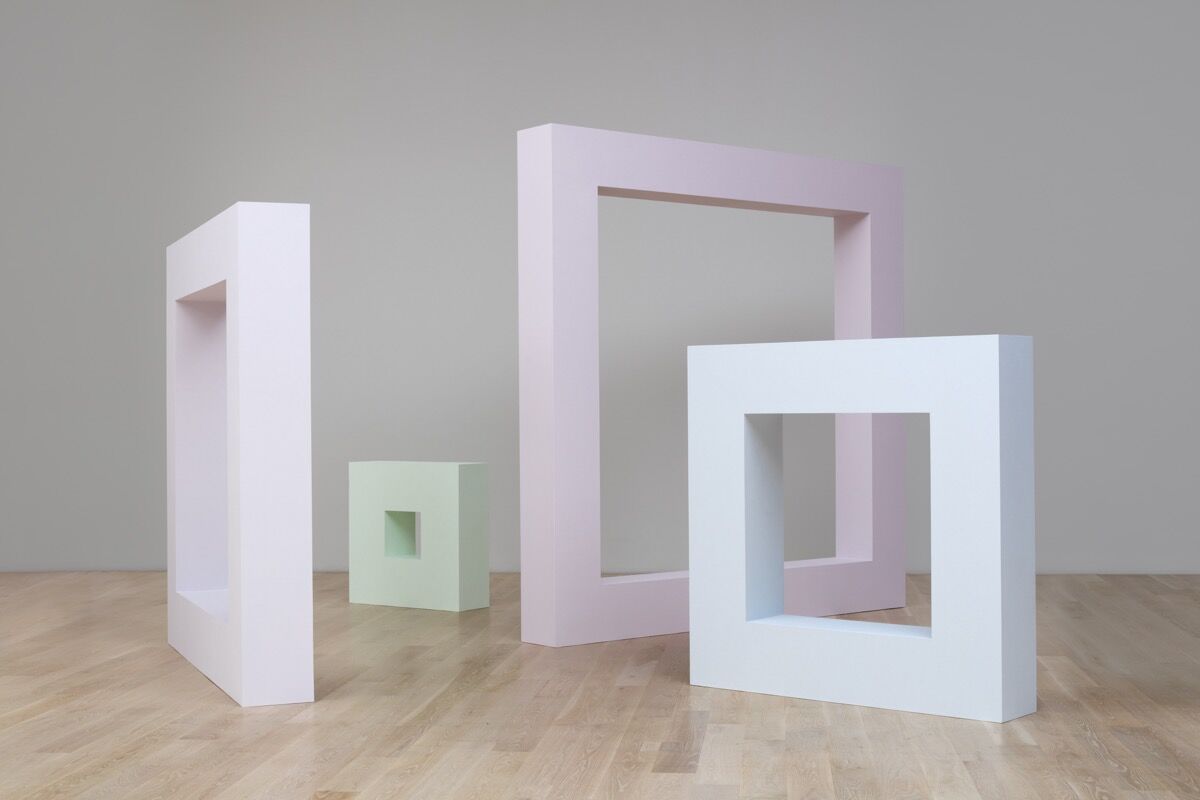 Advertisement
Sunset Squares and Trinity are two of the strongest works in the ICA Miami show. They infuse softness and warmth into a Minimalist language that can so often seem cold and impersonal—all that steel, fabrication, and Juddian self-seriousness. I wondered what might have happened if Chicago had continued in this vein. She could have pushed sculpture, and Minimalism, in gentler new directions.
Already, though, Chicago was diversifying her practice. Throughout the 1960s, she created her bright,
Pop
-inspired painted car hoods. Enrolled in auto-body school at the suggestion of artist
John Chamberlain
, Chicago learned how to lacquer car hoods. She decorated them with abstracted sexual iconography. Bigamy Hood (1965–2011), for example, features a multi-colored phallus at its center with a series of suggestive arrows pointing up the shaft. Apple-like shapes on either side resemble a pair of female hips and interior organs. “The perennial symbol of freedom, independence, and self-determination in America, the automobile was a preloaded support,” writes critic Sarah Lehrer-Graiwer in the ICA Miami exhibition catalogue. “And the hood…gestures implicitly to the vehicle’s oily inner workings.” 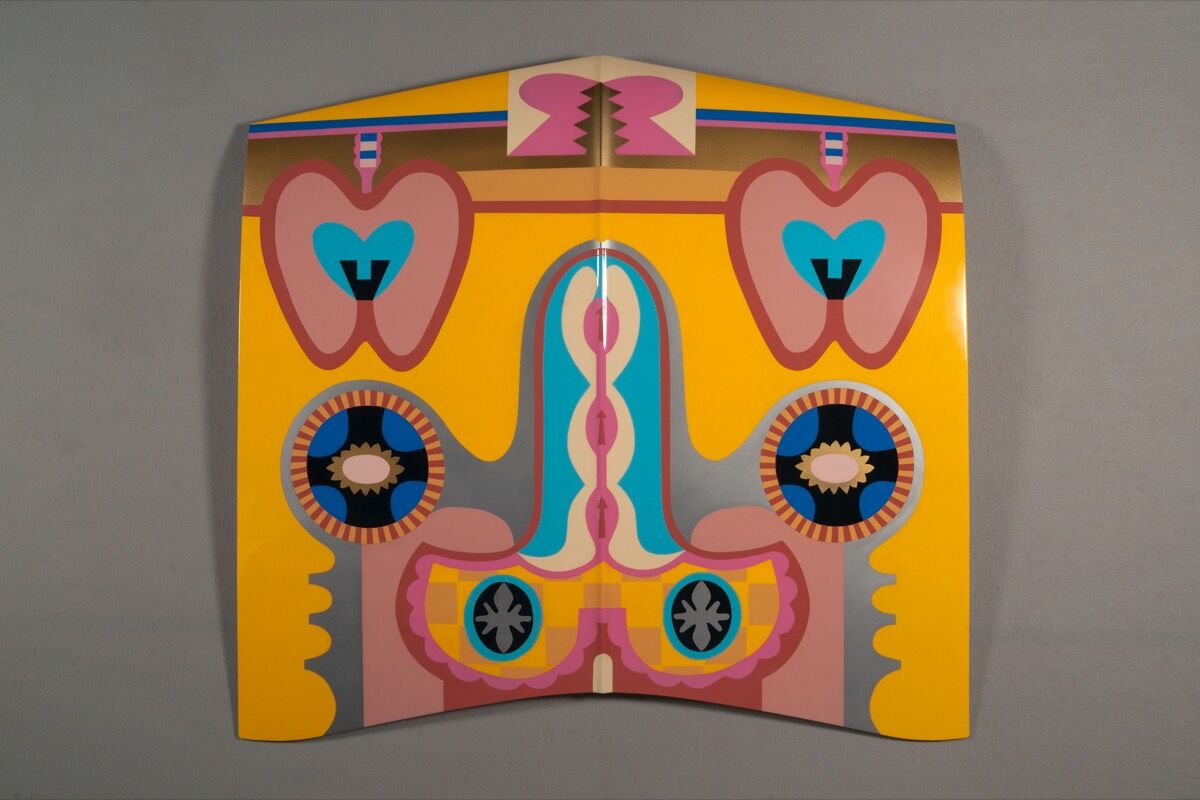 Like her fellow Californian, McCracken, Chicago could have continued to make art in the “finish fetish” camp, emphasizing pristine surfaces. Instead, in the early 1970s, she made a radical shift to psychedelic paintings: rippling yonic compositions, for the most part. One significant work from the era, Heaven is for White Men Only (1973), espoused “intersectionality” over a decade before Kimberlé Crenshaw coined the term in 1989 (to mean combining gender equity concerns with those of economic and racial equity). The painting features multicolored bars, overlaid in a star shape, against a blue-and-yellow background. “I read a lot of critiques about us relic feminists from the 1970s and how we didn’t understand intersectionality,” Chicago said at the exhibition preview. “Excuse me. This is a series of flesh bars of different colors, suggesting that it is your gender and your color that determine whether you can get into heaven.”
Throughout the 1980s, Chicago translated her developing feminist language to weavings—“painting with thread,” in her estimation. In all, the artist and over 150 collaborators created dozens of artworks depicting the process of childbirth. In tapestries such as Birth Trinity (1983) and Earth Birth (1983), Chicago rendered women as part of the landscape. In each, nude female forms merge with the abstracted ground. The body integrates with nature in celebrations of women’s procreative powers. If the works can feel like overeager doulas, they are also significant achievements in technique. During the preview, Chicago enumerated the alternate techniques for each of the included works—needlepoint, petit point, rug. “Critics are unprepared to write about [the specifics of weaving] because it’s been ignored,” Chicago said. Unfortunately, most art critics can still speak much more knowledgeably about techniques for painting than of craft—which has traditionally been the purview of women, not men (guilty as charged). 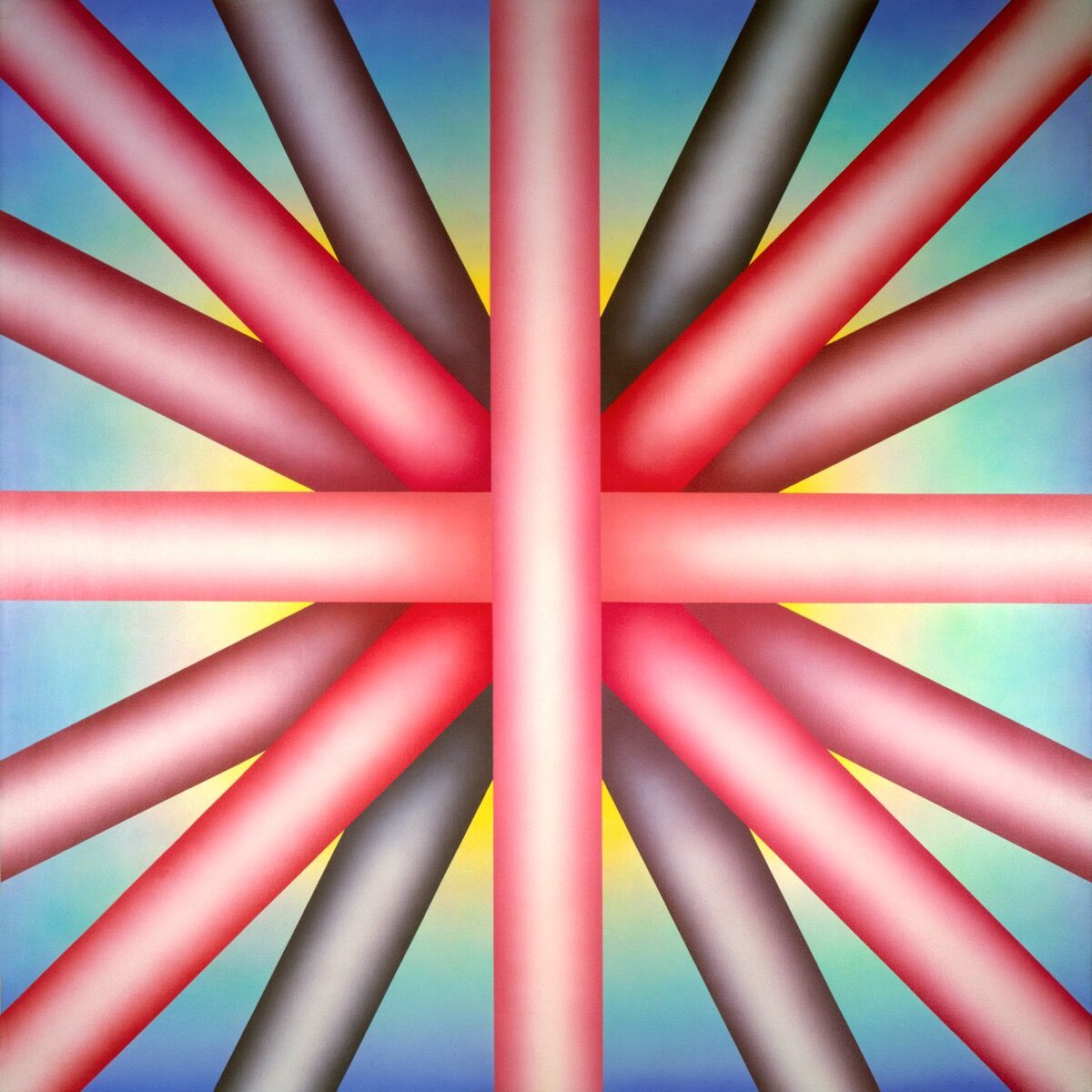 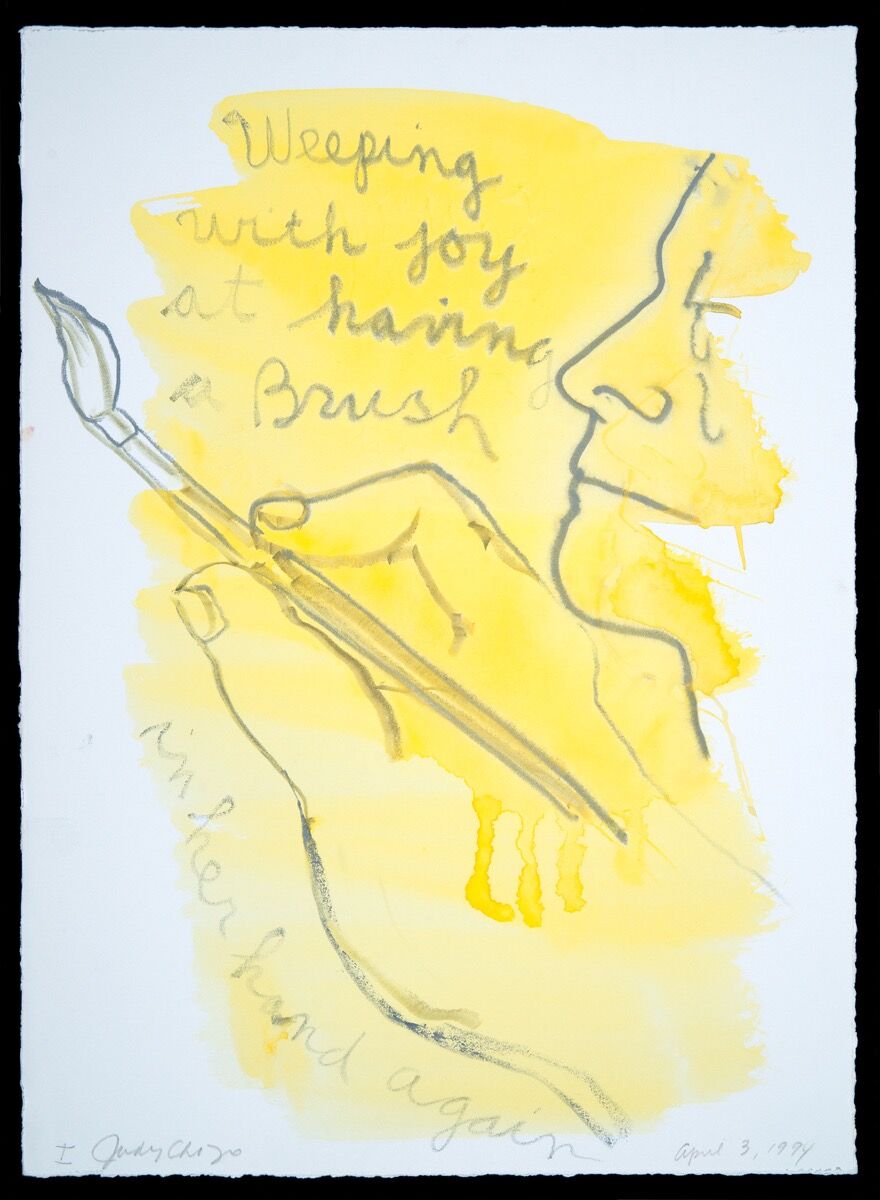 In a curatorial coup, these works face a massive painting of a giant, naked man peeing on the landscape (Pissing on Nature, 1984). It’s an ugly, absurd approximation of masculinity with a significant degree of 1980s kitsch.
The show ends on a weak note—a series of drawings that Chicago made from 1993 to ’94—one each day, for a year. She drew lots of cats, images about angst surrounding her artistic ability, and melodramatic text (“betrayal again,” “WOMAN / JEW / EVERYONE WAS GOING TO SEE WHO SHE REALLY WAS”). Still, the works reveal that even into her sixties, Chicago was willing to take bold new risks. In the catalogue, Lehrer-Graiwer writes: “Each formal move and development was the expression of newfound, urgently felt feminist conviction based on the acute knowledge that the personal is indeed political, and vice versa.”

Chicago, of course, continues to make art. She’s not afraid of getting involved with more commercial ventures, either, having just released a series of Dinner Party–inspired plates with New York design company Prospect NY. (“I’d rather market feminism than patriarchy,” the artist said.) And her groundbreaking, divisive “PowerPlay” paintings—one of which is on view at ICA Miami—have taken on new life as of late, their faces of enraged men resonating during the recent Brett Kavanaugh hearings. At 79, Chicago is still developing new tricks to respond to an ever-shifting political climate.
Alina Cohen
Related Stories