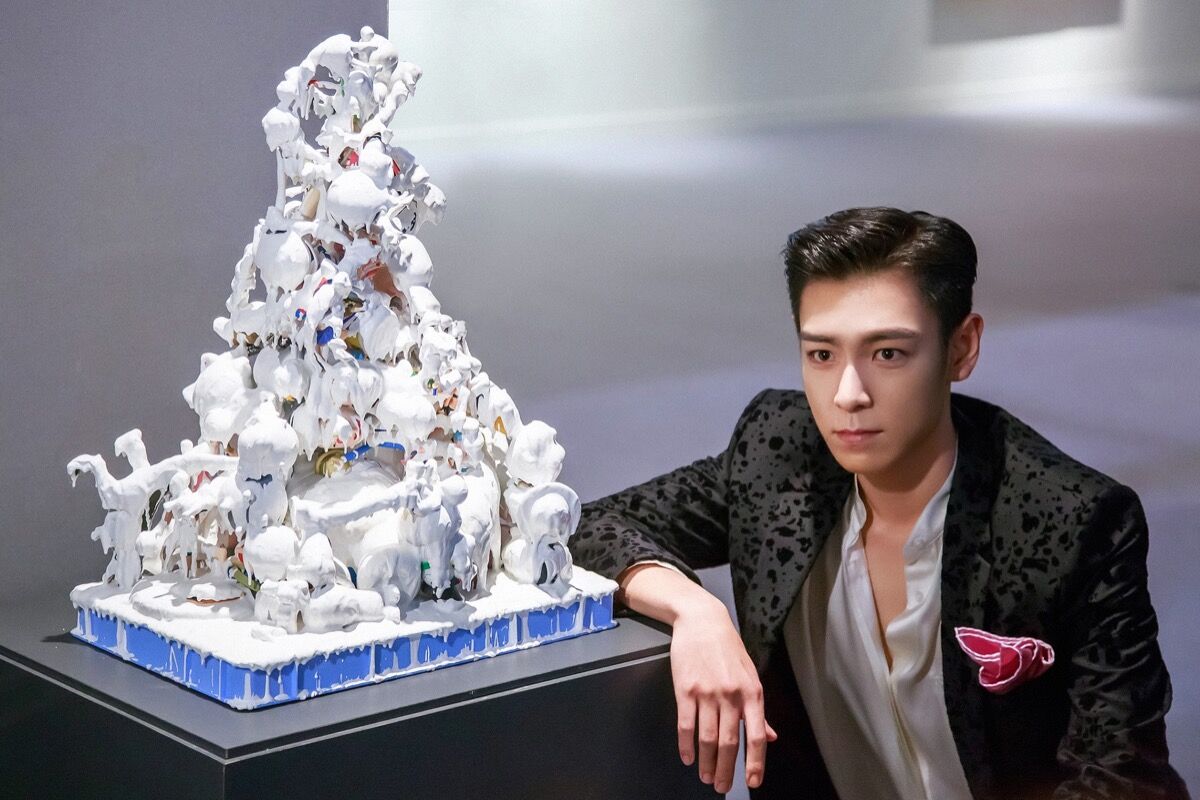 The art market is slowing, even in Asia. Results of recent autumn auctions in Hong Kong confirmed that the region, which has seen an art boom over the past decade, is not immune to the general softening of the global market. But with auction houses applying the right strategies, record-breaking sales were nonetheless achievable.
Sotheby’s Hong Kong and French auction house Artcurial eyed the potential of building up a younger crowd of collectors made up of those age 40 or under. While older collectors in Asia tend to seek out art based on the geographical origin of the works, new buyers have followed a purchasing path more favored in the West—collecting art on the basis of their tastes and interests. The combined hammer prices of these lesser known works might not be comparable to those by traditional blue-chip artists; but taken together, the sale of a number of these less expensive works provided a somewhat unexpected bright spot amid a cooling market.
Sotheby’s Hong Kong teamed up with K-pop super star T.O.P., from the boy band Big Bang, for a sale entitled #TTTOP. In the style of the house’s Contemporary Curated series of auctions, Sotheby’s invited the 28-year-old South Korean singing sensation and art collector, originally named Choi Seung-hyun, to “guest-curate” the sale. Some 25 lots were on offer, including a range of works from East and West.
Well exceeding its combined pre-sale estimate of HK$90 million ($11.5 million), the sale on October 3 totaled HK$136 million ($17.4 million). The figure is a record for a sale of Western art in Hong Kong, according to Sotheby’s.
Jean-Michel Basquiat
’s painting Infantry (1983) was the top lot, and fetched HK$46.7 million (just under $6 million) in a sale to an anonymous buyer. The auction also set several new artist records, including for the Kyoto-born
Teppei Kaneuji
, whose sculpture Avalanche #1 fetched HK$275,000 ($35,256). In a total that broke the artist’s record for works on paper,
Keith Haring
’s Untitled (a collection of 23 works created in 1982) went for HK$8.2 million ($1.1 million). An auction record was also set for
Lee Ufan
’s winds series, with the artist’s With Winds (1988) going for just under HK$10.9 million ($1.4 million). 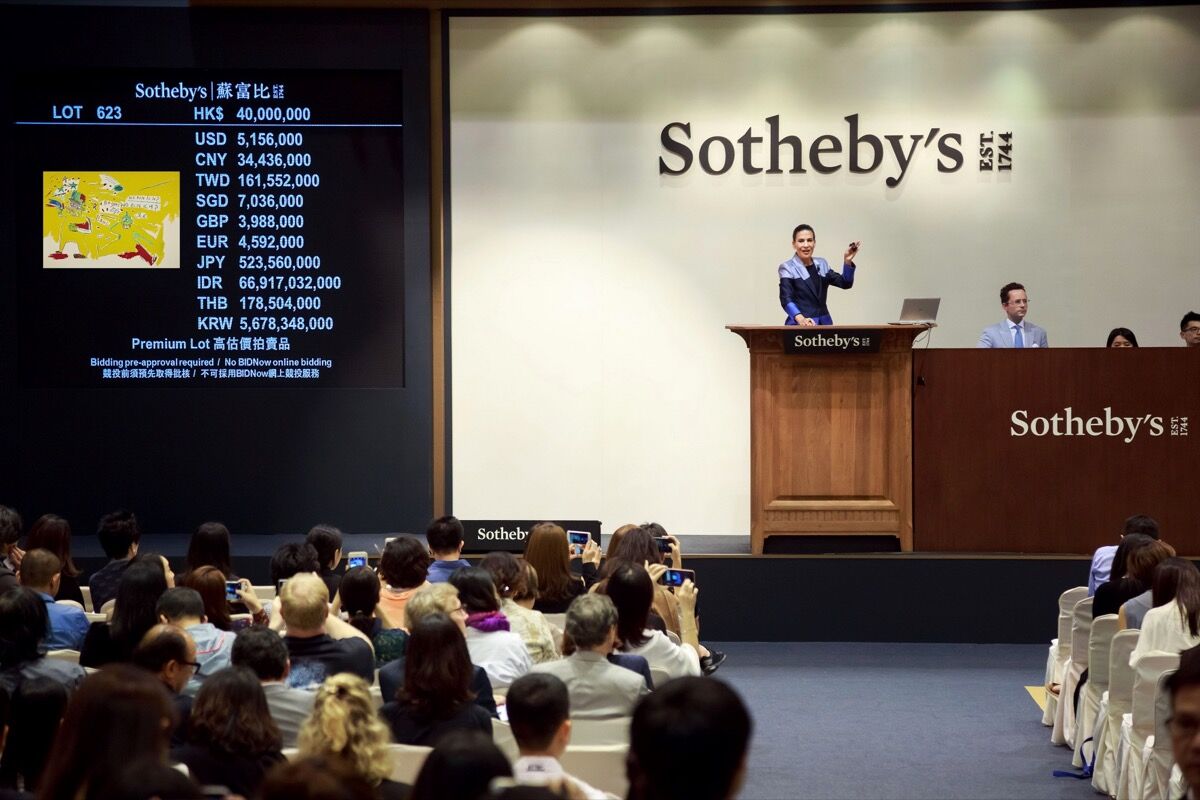 T.O.P.’s enormous following created a level of buzz for the Hong Kong sale greater than that preceding Sotheby’s prior Contemporary Curated sales in New York and London. Sotheby’s preview of #TTTOP even saw many school girls entering an auction house for the first time just to pose for photos with the artworks that their idol had previously been photographed with. But according to Evelyn Lin, head of contemporary Asian art at Sotheby’s, that buzz extended beyond teens, successfully luring in new customers and translating into actual sales.
“Hong Kong still remains a very exciting market as we see more young and new faces coming to us,” Lin said. She noted that compared to America and Europe, which are dominated by mature collectors, Asia’s buying public increasingly trends younger. “The market is slower than before, but we have these young collectors who collect everything that they like and can afford. T.O.P. represents this generation of collectors,” Lin said, suggesting that these new collectors are less susceptible to market sways. Indeed, the #TTTOP sale attracted buyers from more than 20 countries—and more than half of them were aged 40 or younger. According to Lin, twenty percent of the bidders were new clients with the auction house. The move to appeal to younger buyers proved to be an appropriate one in the current market.
But excluding the #TTTOP sale, results from Sotheby’s autumn auctions of modern and contemporary Asian art in Hong Kong (which includes three categories: modern Asian art, contemporary Asian art and modern and contemporary Southeast Asian art) were down yet again, bringing in HK$698 million ($89.5 million). The slump follows a slight contraction that occurred this past spring, when the same auctions brought in HK$793.4 million ($101.7 million), a decrease from the fall 2015’s total of HK$819.2 million ($105 million). “There is no doubt that the art market has seen better days. Art that used to fly off the walls now falls off, slowly,”  said art advisor Jehan Chu. “Auction houses face reluctant sellers, choosy buyers, stiff competition from both other auction houses and large galleries, and are urgently experimenting with ways to stay relevant.” Chu added that while “combining celebrity and art is not a new formula, finding someone with T.O.P.’s star power was a coup for Sotheby’s.”

Advertisement
French auction house Artcurial also placed its bet on a younger crowd for its second-ever sale in Hong Kong, which offered comics and street art. The sale totalled nearly HK$21.9 million ($2.8 million) and set a few records, including Fresco for the Cultural Center of Wallonie-Bruxelles (1979) by Adventures of Tintin creator Hergé, which sold for HK$8.4 million ($1.08 million). The figure is a world record for a post-war original work by Hergé. “There is a strong market in the region for top quality comics and to a certain extent street art,”  said Isabelle Bresset, associate director of Artcurial.
Bresset noted that this this sale was smaller than in years past, offering 92 lots compared to the 117 lots put forward the previous season. She reported strong bidding from Thailand, mainland China, and Hong Kong. Bresset further noted that European buyers were consistently outbid by Asian collectors. Again, many of those Asian collectors were younger, the saleroom filled with young buyers in their thirties and forties. The sales show that appealing to younger collectors with targeted auctions that speak to their interests is a way that auction houses can build a new collector base amid a general market cooling.
Vivienne Chow
Related Stories