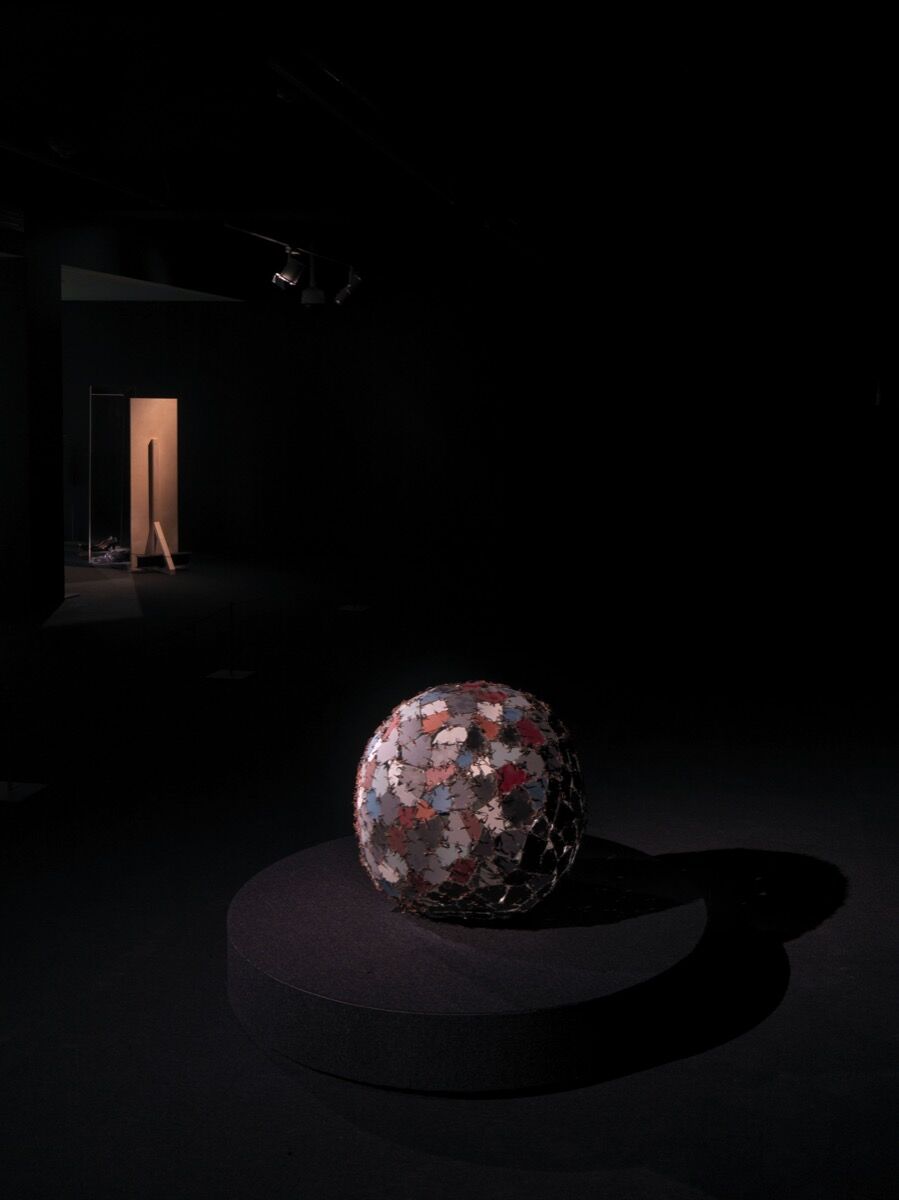 Kader Attia, installation view, from left to right, of Untitled, 2017; and Chaos + Repair = Universe, 2014, in “Kader Attia: On Silence” at Mathaf: Arab Museum of Modern Art, Doha, Qatar, 2021. Courtesy of the artist and Qatar Museums. 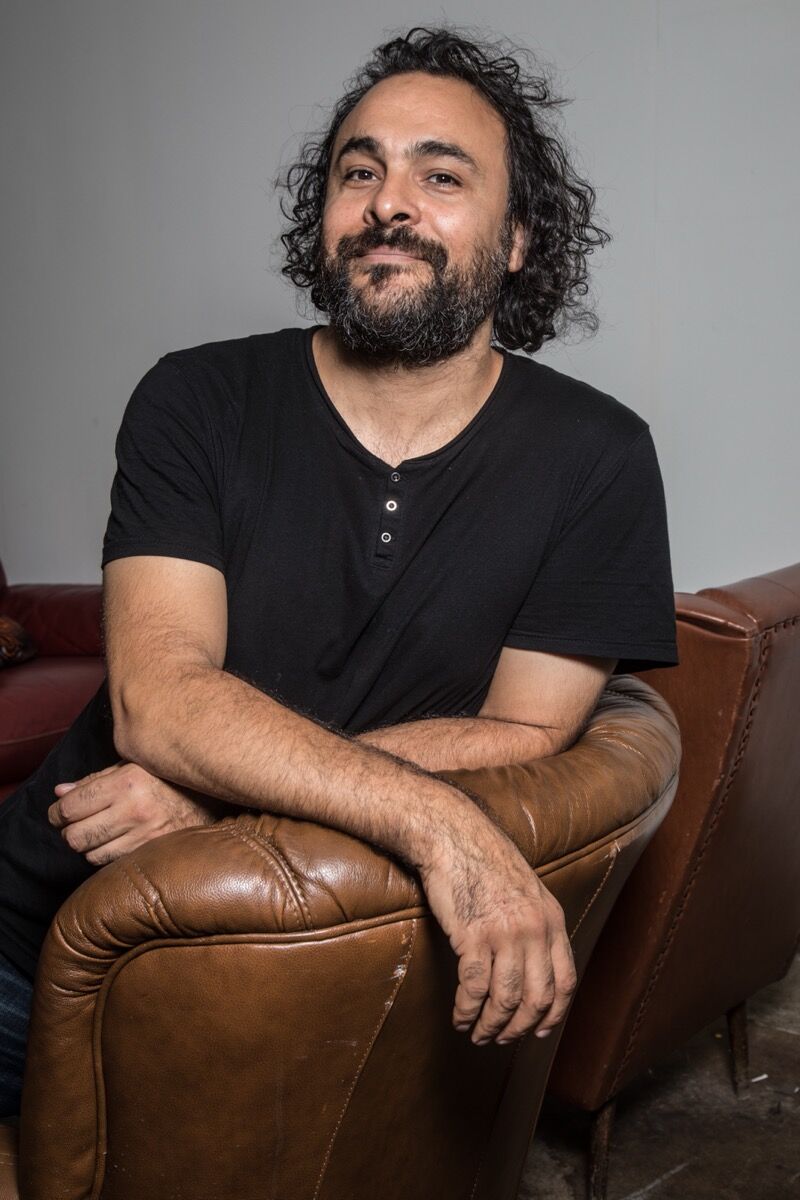 In the landscape of political oppression and media excess,
Kader Attia
thinks silence is an oxymoron. In his current solo exhibition, “On Silence” at the Mathaf: Arab Museum of Modern Art in Doha, Qatar, the artist manages to materialize the absence of sound—and question its potential.
Attia’s paradoxical approach to silence can be seen in the remarkable 2007 installation Ghost. The installation, which is central to “On Silence,” features rows of Muslim women praying, rendered only through shrouds of aluminum foil. As viewers enter the long gallery at Mathaf that hosts the piece, they first encounter the crowd of devotees’ hunched backs. Only upon moving deeper into the space is the spectral emptiness of the figures reveales. The metallic sheen of aluminum renders the praying gesture ambiguous, but a sense of meditation is evident from the collective nature of the act and the silence that inhabits the gallery. Attia modeled the figures after his mother, yet kept each one hollow, allowing for an eerie void. 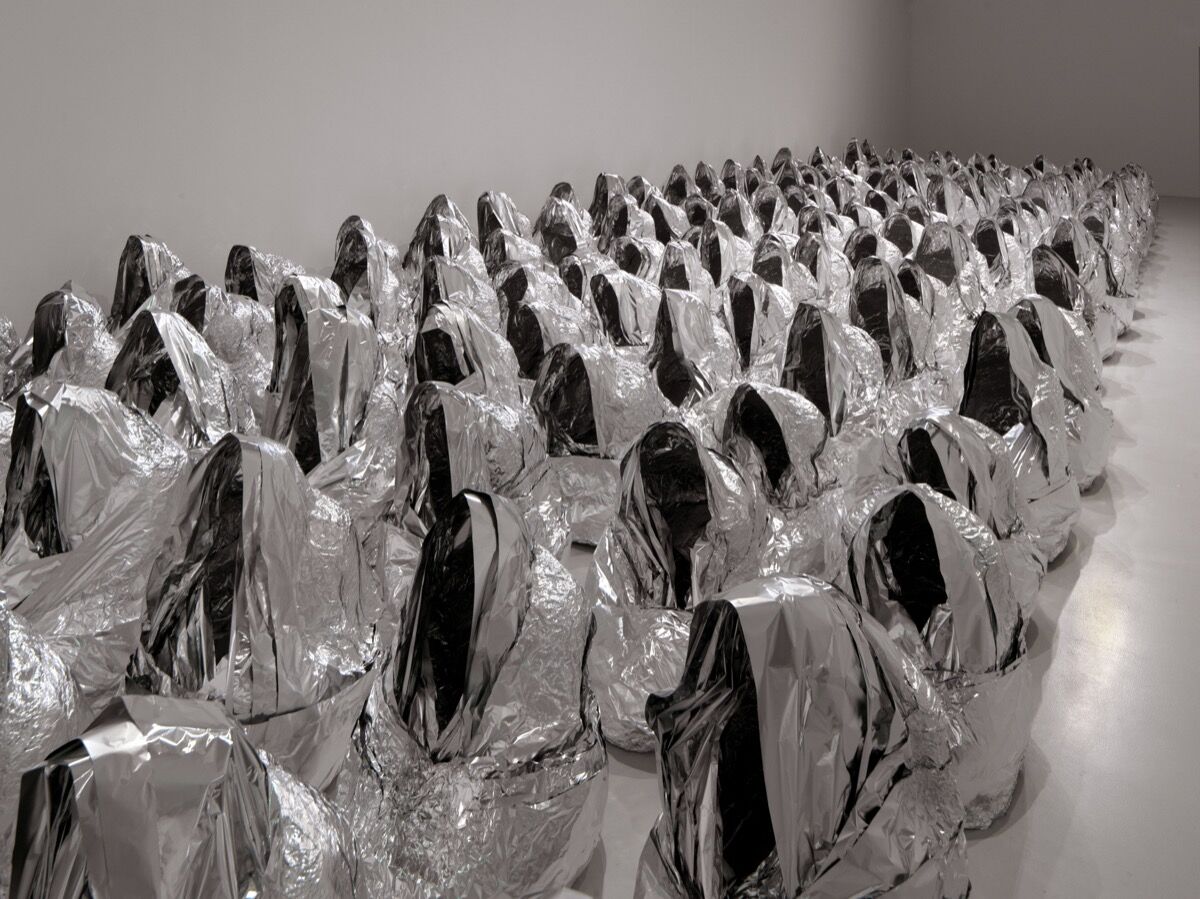 “We look for silence to rest, but the notion is much more ambivalent today,” Attia explained in a recent interview. “Silence is also a weapon of surveillance and authoritarian politics because people are imposed to not speak up.” The spectrum of silence, from peaceful respite to forced oversight is found throughout the exhibition and Attia’s oeuvre.
“On Silence,” which is on view through March 31, 2022, chronicles the prolific French-Algerian multimedia artist’s last two decades of work. Divinity and skepticism, loss and reclaim, or beauty and atrocity are all pillars that uphold the Paris and Berlin–based artist’s practice, which includes sculpture, film, works on paper, and installation. Through meticulous research on colonial trauma and its unlearning (he cites Taoist Chinese philosopher Lao Tzu’s teachings about meaning and void in regard to Ghost), Attia does not shy away from gripping visual statements. 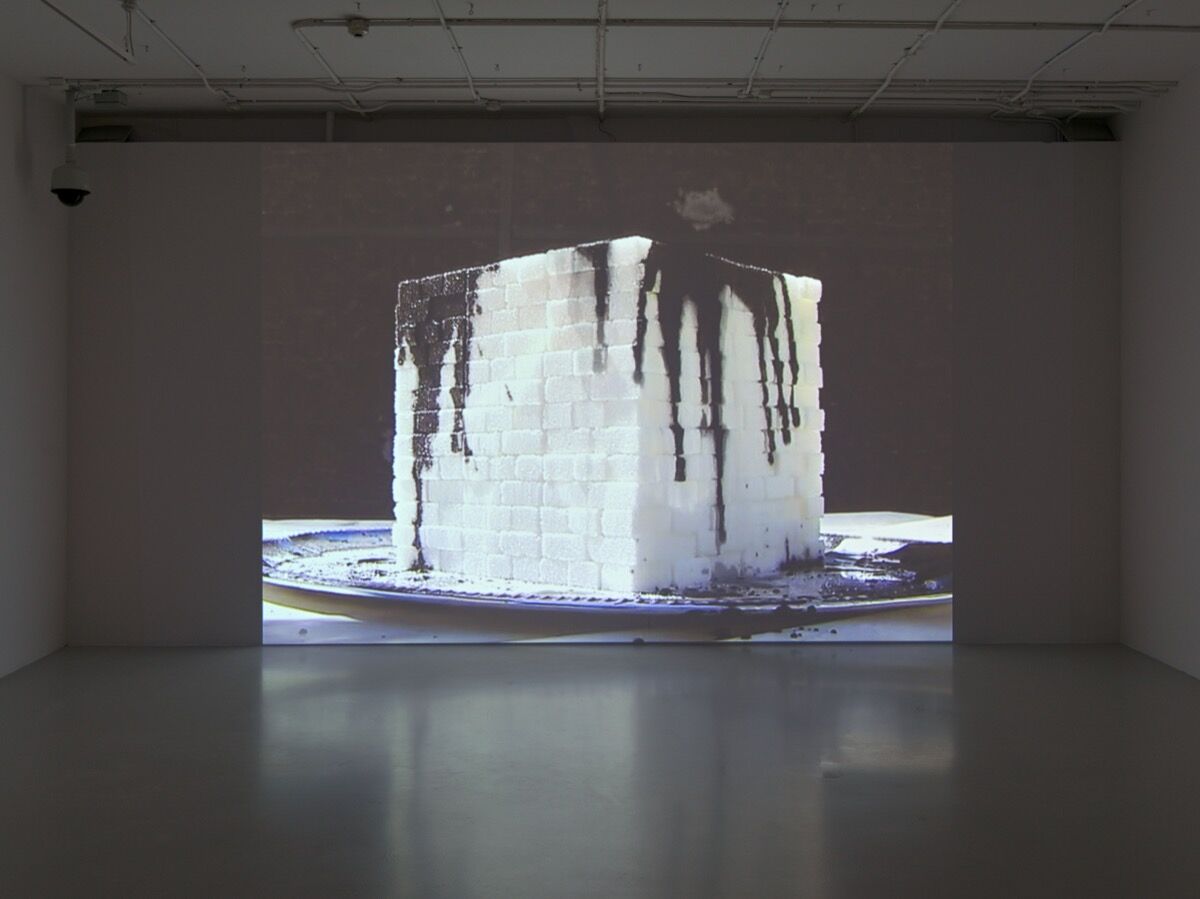 Kader Attia, installation view of Oil and Sugar #2, 2007, in “Kader Attia: On Silence” at Mathaf: Arab Museum of Modern Art, Doha, Qatar, 2021. Courtesy of the artist and Qatar Museums.

Advertisement
In 2009, he built Untitled (Ghardaïa), a replica of the namesake ancient Algerian city made entirely of couscous. The work pulls the viewer into the complex exchange between the North African aesthetic heritage and its colonizers. At MoMA, in 2012, Attia exhibited Open Your Eyes (2010), a double-sided projection of archival images culled from mainly western museums. The juxtaposition of repaired artifacts and brutally wounded soldiers prompted uncharted pairings of anguish within the context of institutional critique.
Oftentimes, Attia rewards the viewer with knowledge, though it’s masked by graphic imagery, be it deformed body parts, amputated limbs, or simply broken glasses. Through imagery that represents the irreversible reality of a breakage, he unveils potential avenues of redemption and salvation. And though it’s often a hard pill to swallow, experiencing a work by Attia immediately transforms the viewer, leaving them with lingering curiosity for more.
The silence in Ghost is an homage to the whispering of Muslim prayers and the social politics of performing the prayer ritual en masse in a western space. The viewer’s encounter, however, is briskly poetic, completed by a full walk throughout the otherworldly installation. “When the individual body is connected to a collective action, it produces a form of vibration—the physical and performative aspects of silence,” Attia noted. 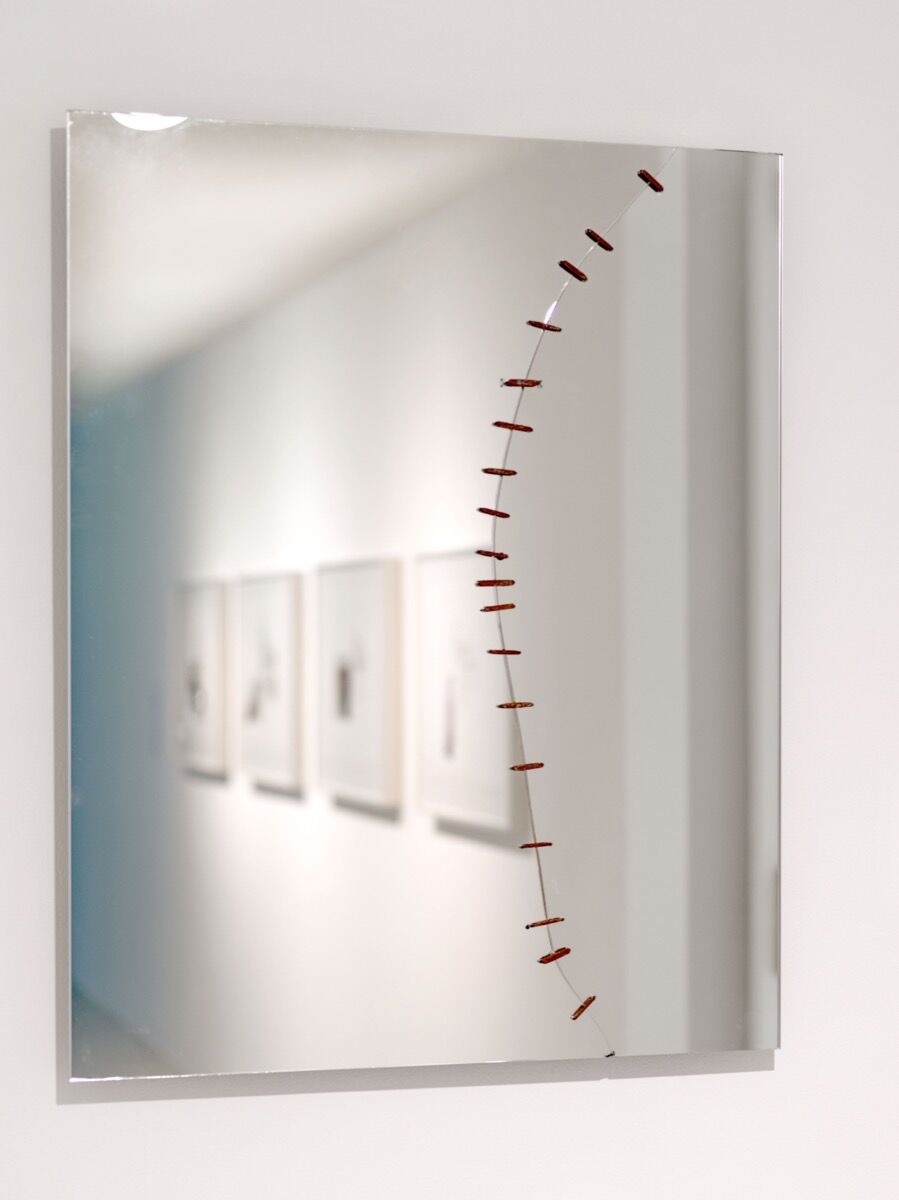 Kader Attia, from the series “Repaired Broken Mirror,” 2020–21. Courtesy of the artist and Qatar Museums. 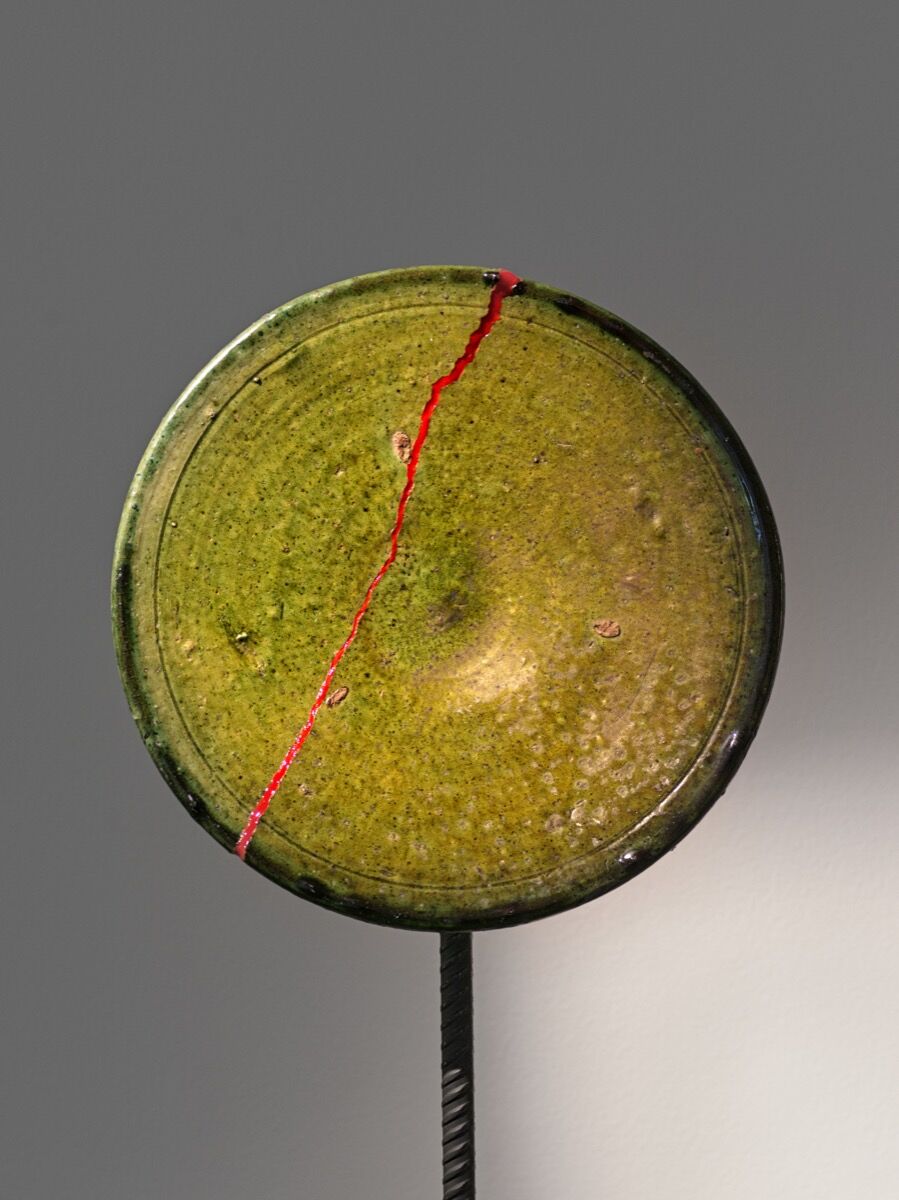 Kader Attia, from the series “Untitled,” 2020. Courtesy of the artist and Qatar Museums.

Other works, Chaos + Repair = Universe (2014) and Separated Together (2019) are made out terra-cotta tiles and mirrors, respectively, that have been shattered then stitched together with metal wires. A surgical precision renders the surfaces flesh-like, enveloping the traumatic process in search of beauty. “The audience, most of the time, doesn’t meet the artist to explain the work,” Attia offered, reflecting on how art is often left to the viewer to interpret.
Similar to silence, absence is hauntingly ethereal throughout the exhibition. This is perhaps most palpable in the titular installation On Silence (2021) featuring prosthetic limbs suspended from the ceiling throughout an entire gallery. Found, artificial body parts have long been Attia’s source material—a material that forms a bridge between loss and its aftermath. Here, he hangs them above eye level, prompting us to look up from beneath the hovering legs and arms. No matter how many times the viewer encounters the series, the gut-wrenching effect never wanes. 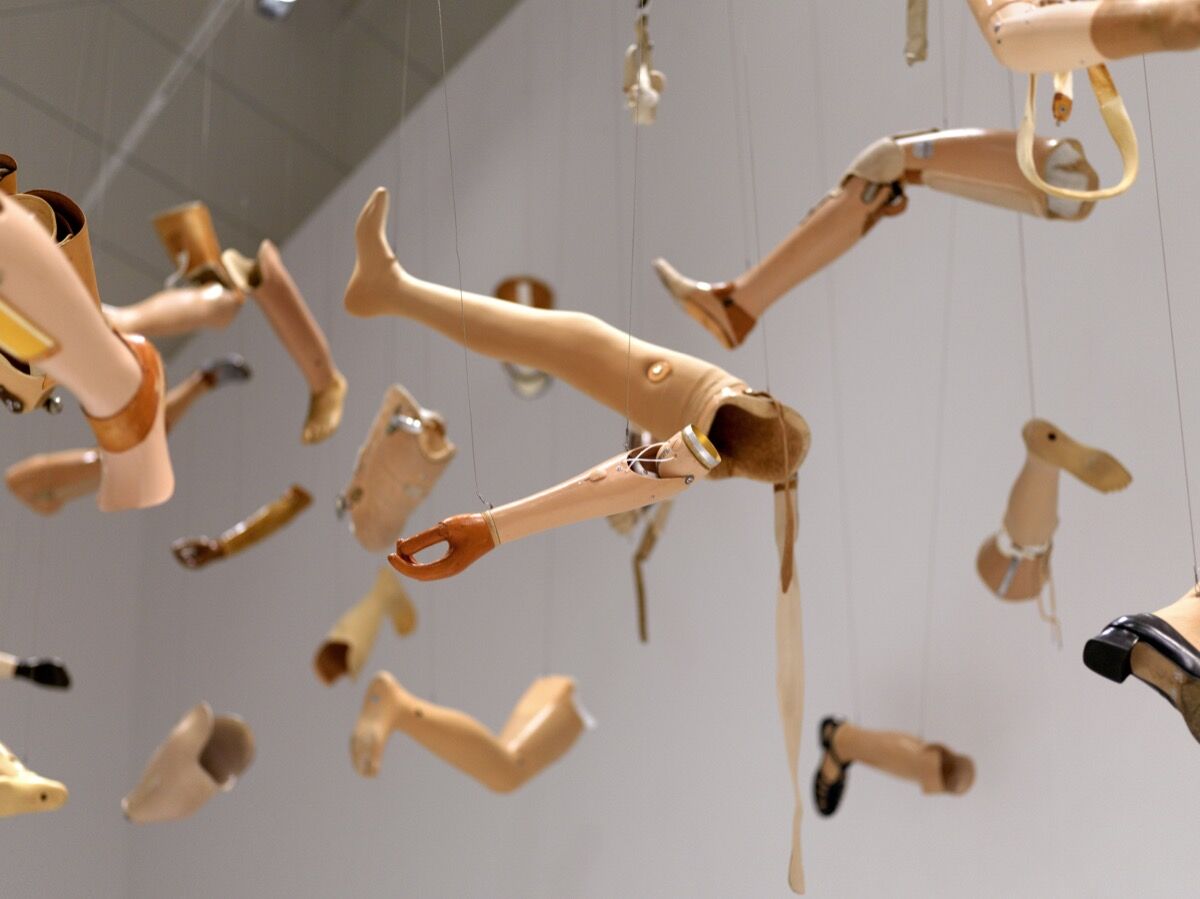 Kader Attia, detail of On Silence, 2021, in “Kader Attia: On Silence” at Mathaf: Arab Museum of Modern Art, Doha, Qatar, 2021. Courtesy of the artist and Qatar Museums.

A lost limb, according to Attia, is a political reminder, a way for the authority to perform its power. “Authoritarian neoliberal regimes create war victims, amputees who cannot afford prosthetics, while their physical and emotional trauma imposes fear on others,” he said. The loss in this case is caused by chaos and negligence. “The cacophony produced by media shadows the real problem today in places like Palestine or Yemen.”
Recently, an interaction with his nine-year old son during a quiet night reminded Attia of the psychological reality of being deprived of sound. “He insisted on listening to a podcast because the silence scared him,” the artist recalled. “I explained to him that the cracks he hears inside the house also happen during the day, but we don’t hear them because of other noises.” Attia’s approach to paradoxes is quite similar, marked by the intertwined dependency of opposites. “Schubert once said that ‘music is an accumulation of injuries of silence,’” he added.
Ushering the viewer through intricate philosophical arguments while eschewing didacticism, Attia admits, is the challenge. “An installation of objects charged with pain and history is about being spiritual rather than too literal,” he said. 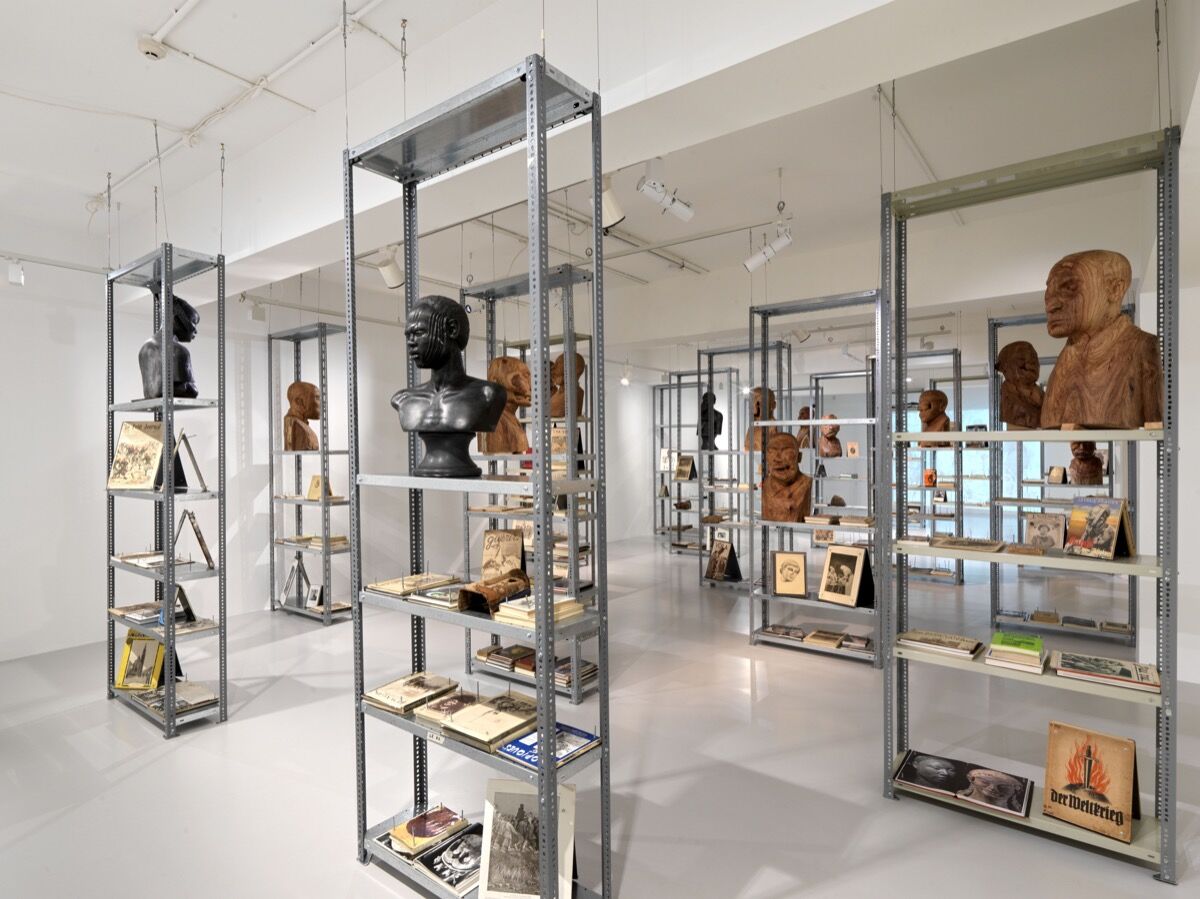 Kader Attia, installation view of The Repair from Occident to Extra-Occidental Cultures, 2012, in “Kader Attia: On Silence” at Mathaf: Arab Museum of Modern Art, Doha, Qatar, 2021. Courtesy of the artist and Qatar Museums.

The Repair from Occident to Extra-Occidental Cultures (2012), is another immersive installation about repair, in this case, colonial trauma and restitution of looted artifacts. First exhibited in dOCUMENTA (13), the installation—which was supported by a publication of imagery and essays—is composed of objects Attia collected over 15 years as part of his research on African cultural heritage facing western colonization and exploitation. Meandering through generic metal shelving units, the viewer encounters archival images of critically wounded bodies in World War I, busts, everyday objects or artifacts from colonized countries, as well as books on history, medicine, and anthropology. True to any Attia statement, the experience is an open door, left generously ajar, yet one must hold their breath to step in.
“The repair of an injured body and restitution post-decolonization are different processes,” Attia said. “The body organically starts healing, but the colonized subject has to decolonize themselves to restitute the imaginary.” Besides returning the cultural objects to their homeland, he believes that the exchange depends on conversations shared both by descendants of the colonizer and the victims. 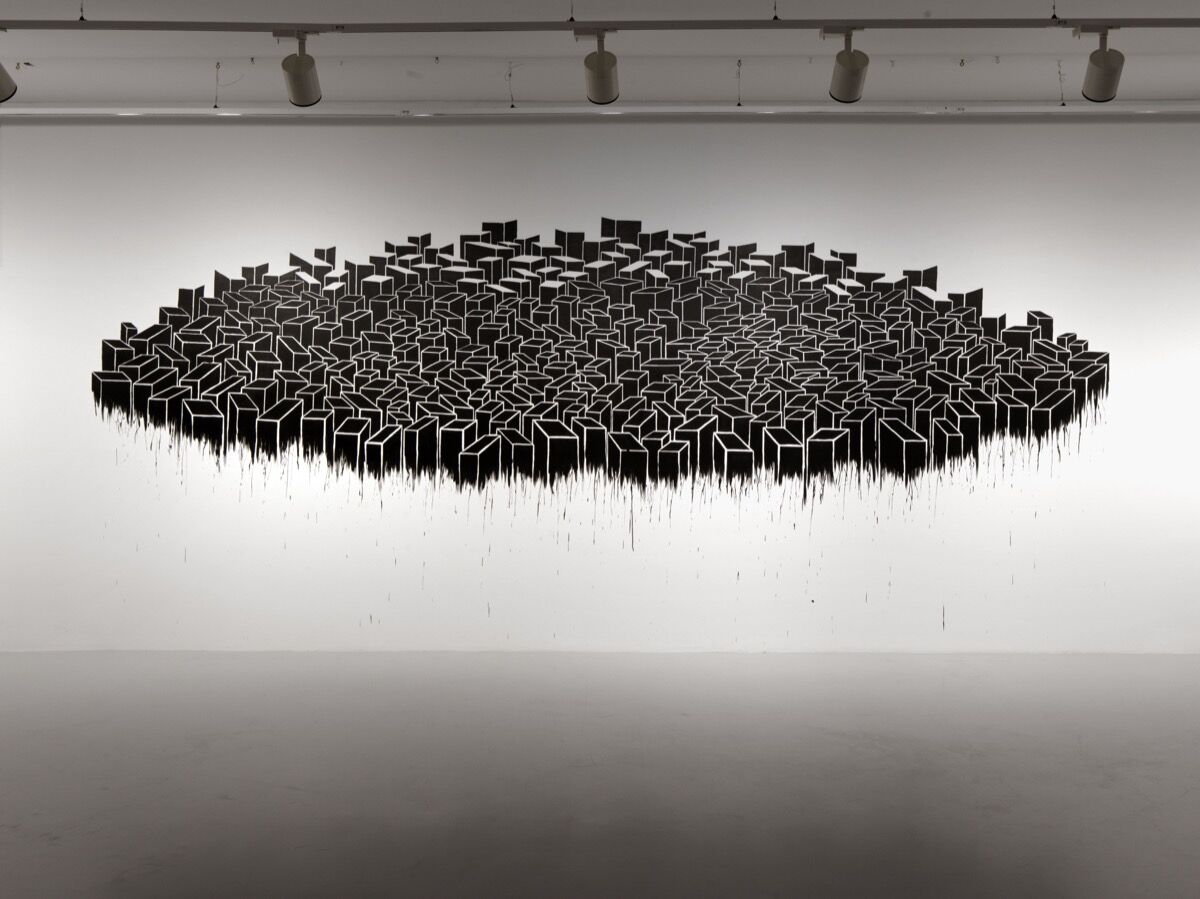 Soon, Attia will have a citywide platform to break down the discussions around repair and decolonization as the curator of the forthcoming Berlin Biennale. After closing his Parisian multipurpose cultural center, La Colonie, during the first wave of the pandemic, the artist has been facilitating the center’s panels, screenings, and workshops in a nomadic fashion. Until La Colonie reopens in another permanent space in 2023, the Biennale’s programming between June 11 and September 18, 2022 will seek ways of “de-colonial thinking” through thinkers and practitioners “with a space of mediation” on topics within and outside of art.
“I am interested in ways to connect with the audience even with hard-to-watch topics,” Attia said. “Aesthetic is in the place of sublime; the tool to access a meaning that is sometimes unspeakable.”
Osman Can Yerebakan
Related Stories