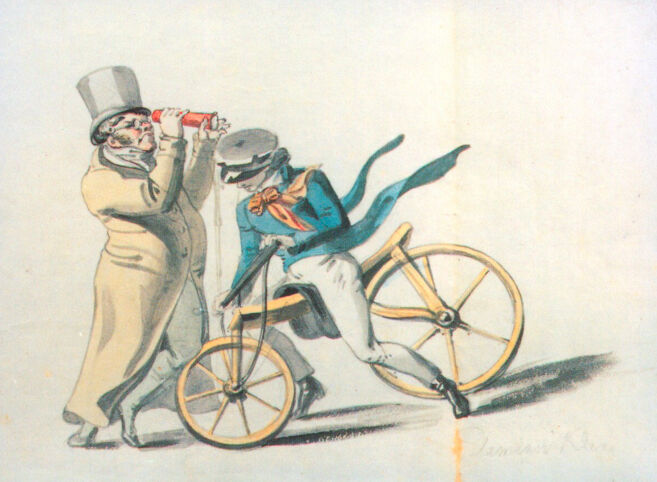 It was 1819, and London was in thrall to the kaleidoscope.
Enterprising souls offered a “penny for a peek” into large kaleidoscopes set up on street corners; ladies and gentlemen purchased luxury versions to display in their parlors as symbols of wealth and taste; and, according to one magazine article, children were so distracted by their new toys that they kept walking into walls. Everyone, it seemed, was mesmerized by the intricate, ephemeral patterns produced by the shards of glass or colored beads that shifted with each turn of the tube.
“In the memory of man, no invention, and no work, whether addressed to the imagination or to the understanding, ever produced such an effect,” wrote a correspondent in the Royal Institution’s Quarterly Journal of Science and the Arts a year earlier. “A universal mania for the instrument seized all classes, from the lowest to the highest, from the most ignorant to the most learned, and every person not only felt, but expressed the feeling, that a new pleasure had been added to their existence.” 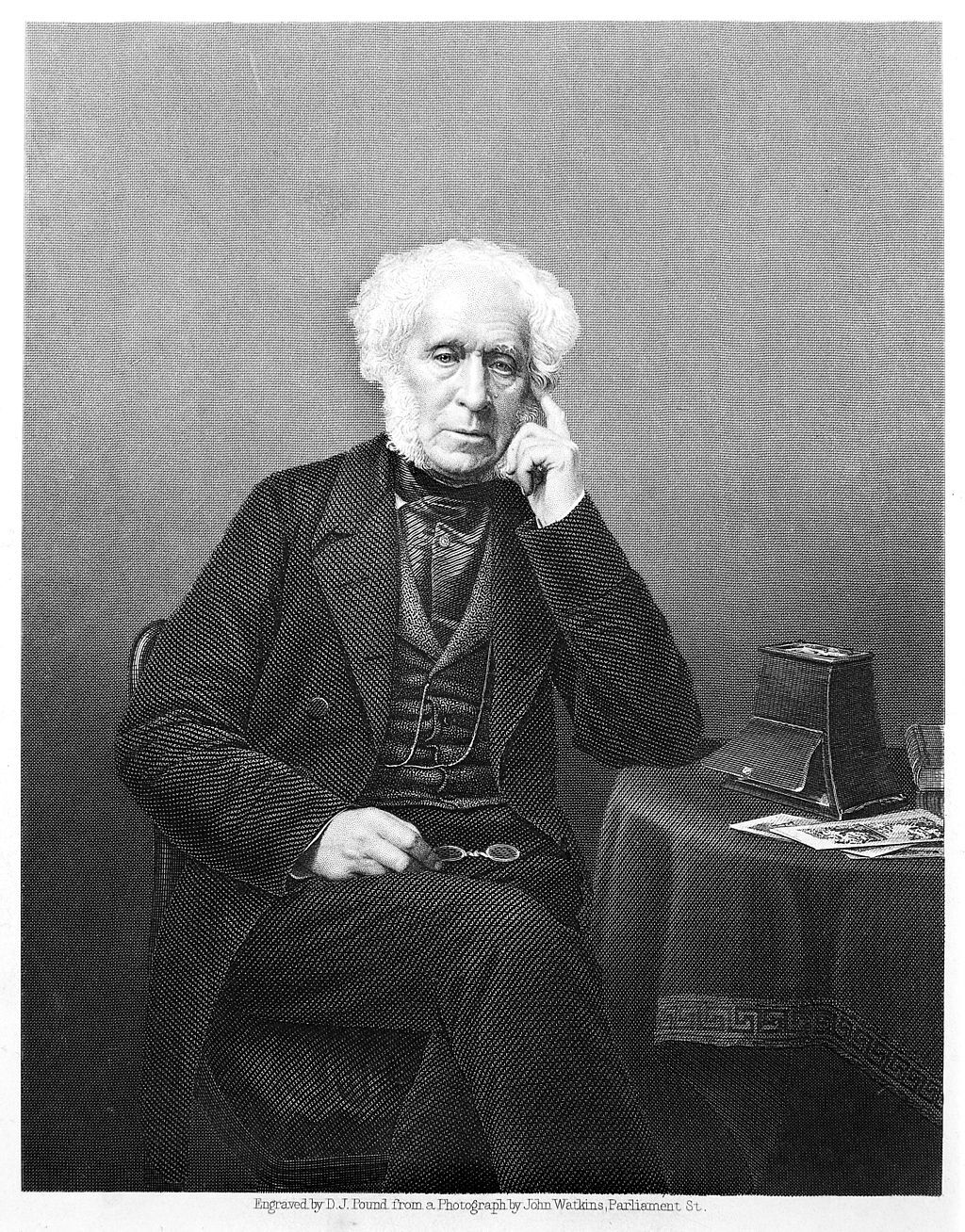 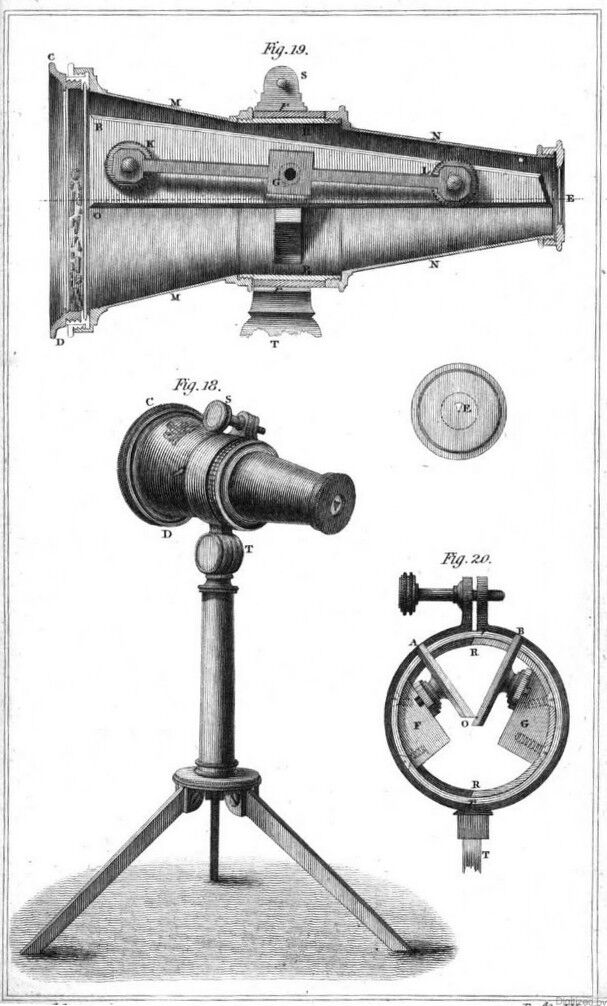 Detail from David Brewster’s “A Treatise on the Kaleidoscope,” illustrating the polyangular kaleidoscope of R.B. Bate, 1819. Image via Wikimedia Commons.

Behind this global phenomenon was Sir David Brewster, a Scottish scientist who patented the kaleidoscope in 1817. It wasn’t Brewster’s first invention—nor would it be his last—but it was, for him, the one that got away.
Brewster spent years experimenting with optics. In 1815, he earned a medal from the Royal Society of London for his realization that a ray of light becomes polarized when reflected and refracted at a particular angle on a transparent plate (today referred to as Brewster’s law). But like many gentlemen of the 19th century, Brewster was interested in more than just scientific discovery—he also saw himself as a public intellectual, inventor, and entrepreneur. 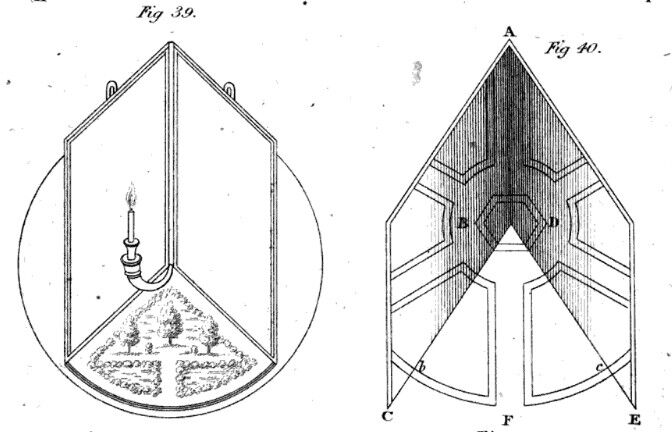 Detail from David Brewster’s “A Treatise on the Kaleidoscope,” comparing the mirror constructions of Kircher (left) and Bradley (right), 1819. Image via Wikimedia Commons.

Advertisement
The kaleidoscope was born out of this polymathic culture. While conducting his research, Brewster discovered that reflective surfaces that face one another produce hypnotizing circular patterns. He planned to house the phenomenon in an elegant wooden tube filled with angled mirrors and capped with an opaque endpiece—a creation that could introduce his optical work to the general public, disseminating knowledge through entertainment.
After filing his patent, Brewster partnered with a manufacturer to make his invention a reality. Almost immediately, someone—likely one of the craftsmen involved in the initial production—ripped him off. A host of cheap knockoffs hit the market almost as soon as Brewster’s version did. “The problem was, he only patented a part of the idea,” explained Dawn Correia, a design practitioner whose Ph.D. thesis focused on the history of kaleidoscopes. “The rest was open to manipulation and development. It was easy to identify that you could change the tube from brass to cardboard and find alternative materials for a cheaper version.”
Kaleidoscopes didn’t just enchant Londoners—they were a massive hit throughout Europe, and even across the Atlantic in America. Brewster’s manufacturer estimated that more than 200,000 units were sold in the first three months after launch. For a 21st-century audience, it might seem surprising that a scientific instrument could have produced a popular sensation rivaling 2017’s fidget spinner. But the 19th century was ripe for such educational entertainment. 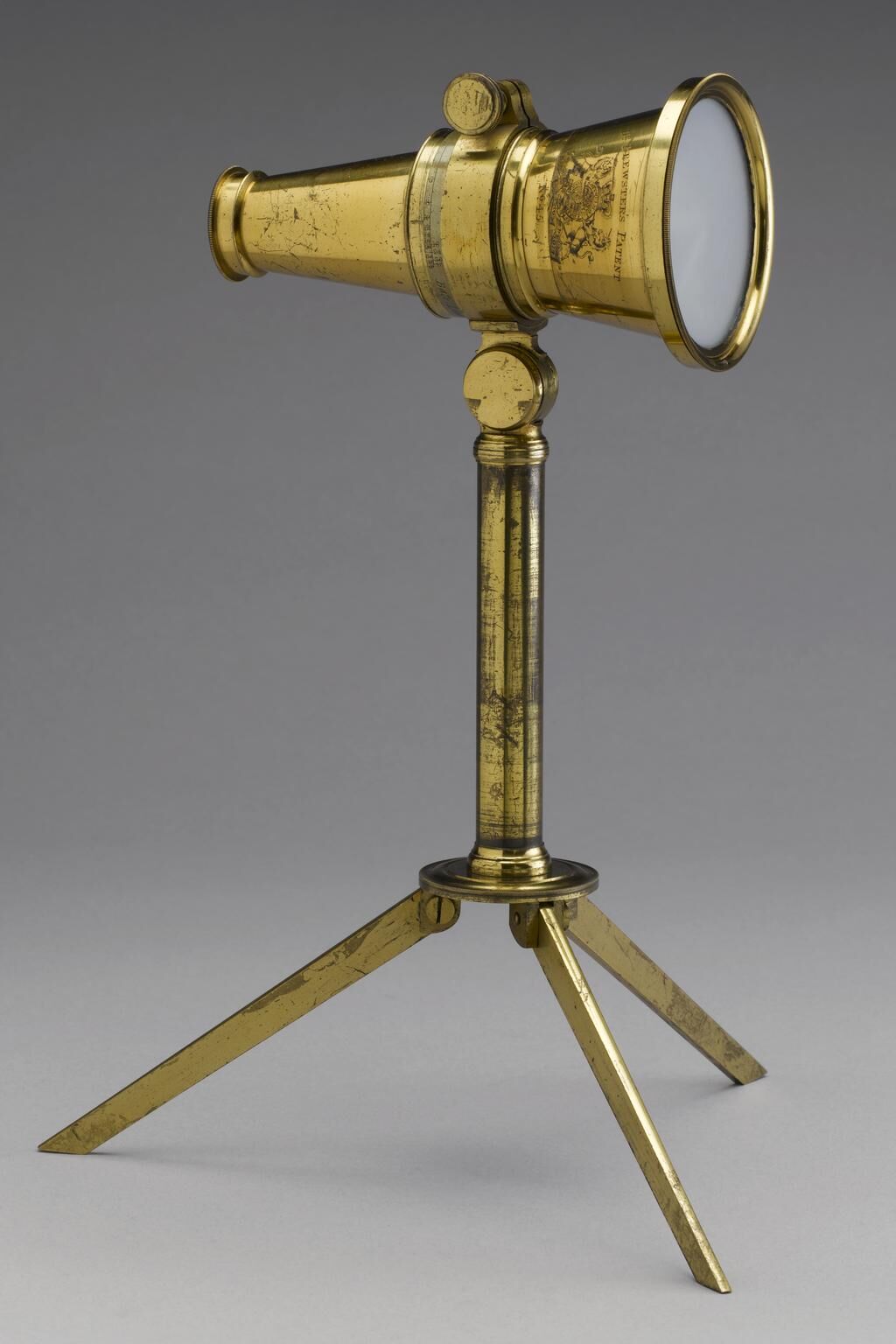 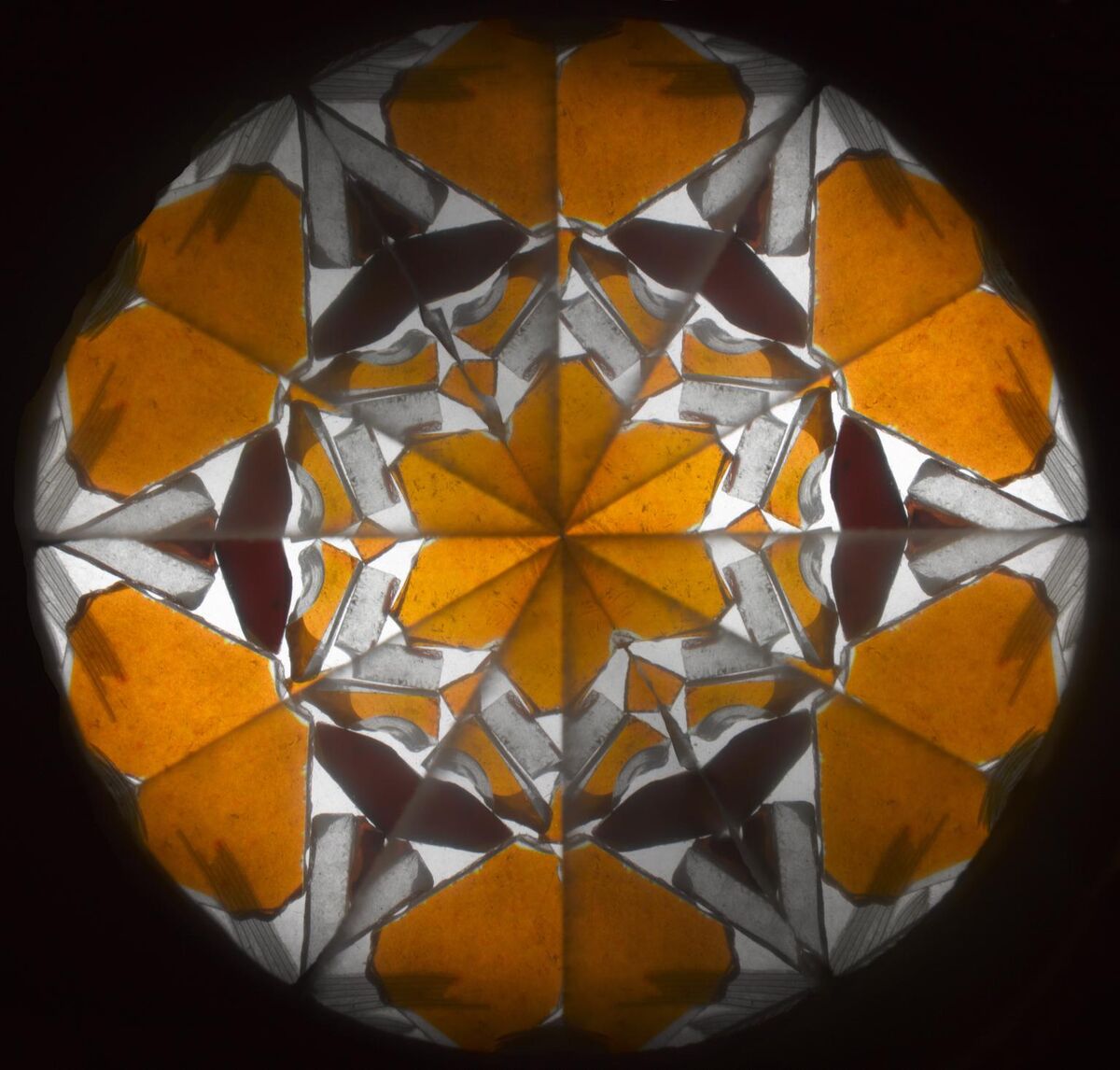 “Unlike the specialization of science now, in the 19th century, there was this idea of instructive entertainment, of making scientific ideas and inventions accessible,” explained Helen Groth, a professor at the University of New South Wales Sydney, whose work focuses on Victorian literature and visual culture. “It was called the diffusion of useful knowledge. That’s where the kaleidoscope comes from.” Other optical instruments in this vein included the zoetrope, the diorama and panorama, the microscope, and the spectroscope. (The prevailing trend at the time was to name your invention using a mishmash of Greek words: “Kaleidoscope,” for instance, combines kalos, eidos, and skopeō—or “beautiful,” “form,” and “to see.”)
Many of these optical effects could be experienced on London’s famous Regent Street. “The posters that were pasted on the walls of the streets of London created this sense of a public sphere, this endless stream of spectacles and wonders and curiosities that people could go and see,” explained Groth. “So that’s why people talk about Regency London as this really dynamic, burgeoning metropolis. But they also describe it quite anxiously, because it’s full of crowds who are addicted to sensation and distraction.”
3 Images
View Slideshow 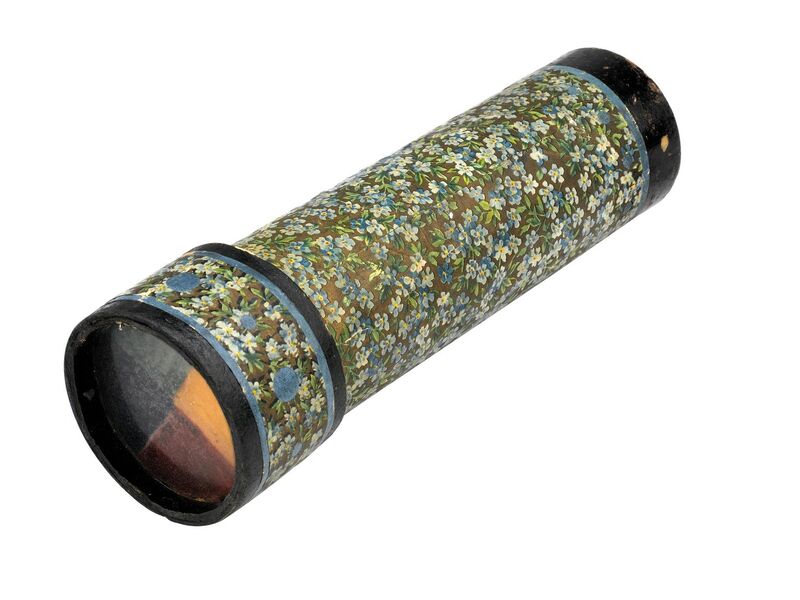 Although the kaleidoscope was part of this world of sensation and spectacle, it also stood apart for its solitary experience. “What’s really distinct about the kaleidoscope is that everyone was avidly consuming it, but the experience itself is very internal, private, and individualized,” Groth noted. Upper- and middle-class families often kept one on a stand in their parlor for private amusement. The more expensive versions came with sets of slides featuring dried flowers, insects, and colored beads sandwiched between glass that you could switch out. “It’s immersive and beautiful,” she continued. “And beauty is an important part of the experience.”
Beauty is even mentioned in Brewster’s patent. “If any object, however ugly or irregular in itself, is placed before the aperture,” he writes, “[it] will coalesce into a form mathematically symmetrical and highly pleasing to the eye.” 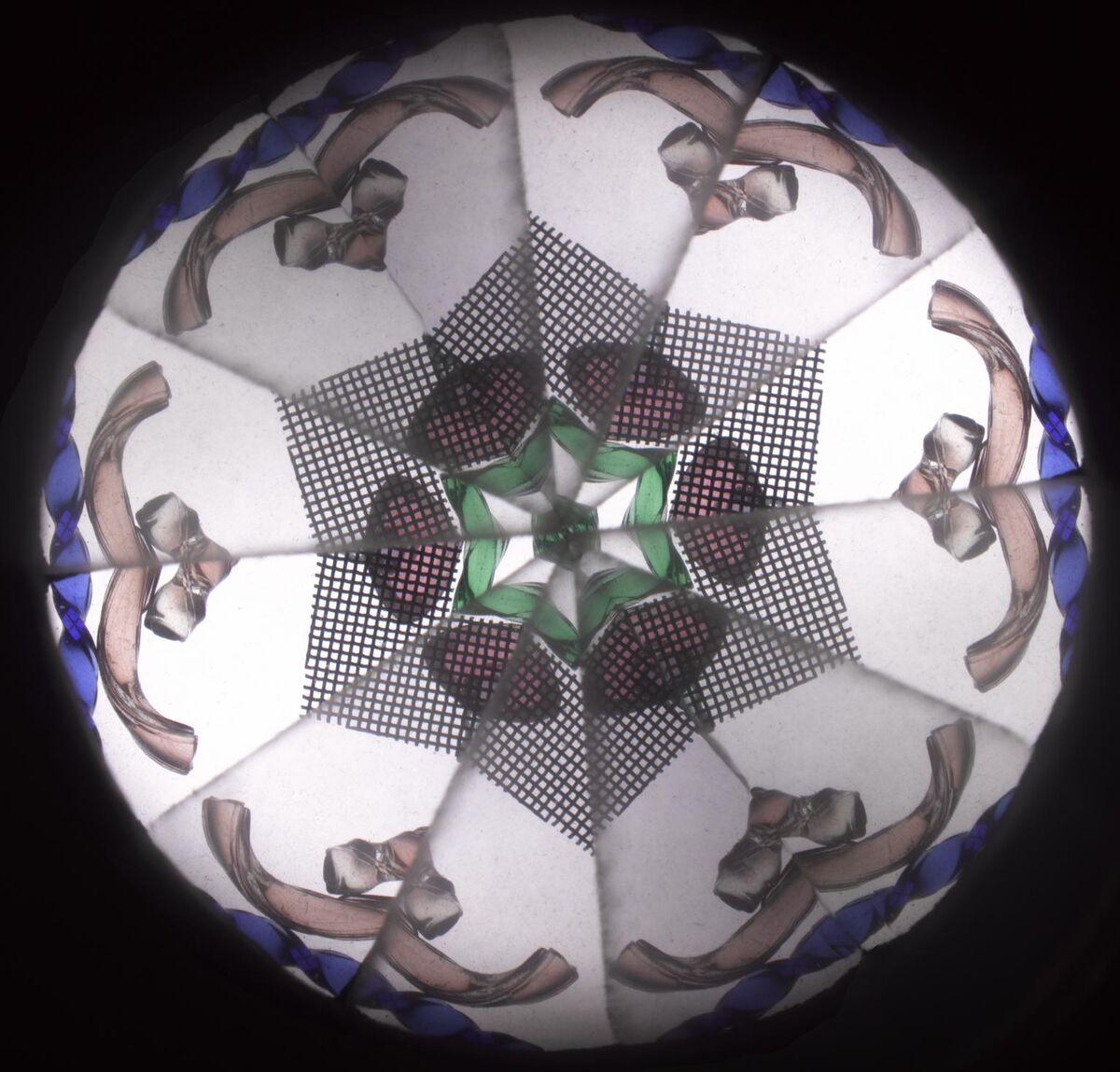 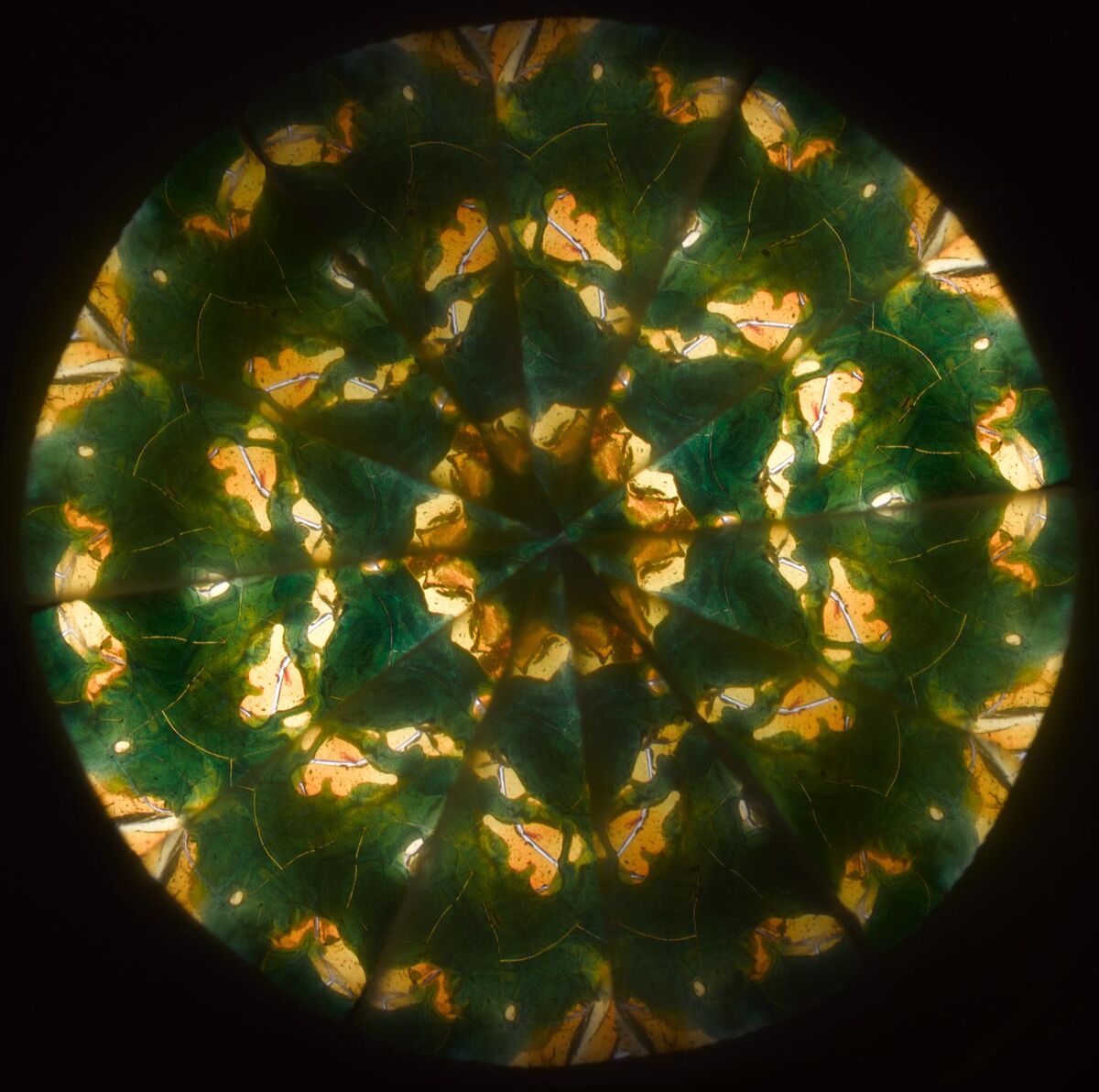 In a later treatise, the scientist even considered the ways in which artists or designers might employ his invention. By that point, Brewster had created a telescopic variation of the kaleidoscope capped with a clear lens that allowed viewers to isolate a particular object in their environment and tessellate it. At a time when everything was produced by hand, Correia noted, Brewster believed his design could be an invaluable aid in rapidly replicating an image. (Correia personally found, however, that using the kaleidoscope is slower than repeating images by hand—perhaps the reason that Brewster’s suggestion never took off among artists.)
Although the kaleidoscope craze eventually faded, the object itself never disappeared. “One of the things that’s really striking about the history of the kaleidoscope is that it’s the only device of its kind that’s still in constant production,” noted Groth. What has (mostly) disappeared are the precise scientific instruments that Brewster intended when he patented the design in 1817. The kaleidoscopes we typically encounter today are more akin to the knock-offs, made from cardboard and meant as nothing more than childrens’ toys (though a niche group of craftspeople and collectors, under the auspices of the Brewster Kaleidoscope Society, keep the luxury market alive).
But the kaleidoscopes of Brewster’s own hand can still be found, preserved in glass cases at museums. “They’re so high-quality and so beautifully made, by instrument-makers rather than toymakers,” Groth noted. “When you put the lenses on and turn them, they’re exquisite still.”
Abigail Cain
Related Stories