(via the L.A. Times)
The Times story, headlined “Gallery Hopes to Sell Kanye West’s ‘Famous’ Sculpture for $4 Million,” was published Wednesday following a two-day private exhibition of the work at L.A. gallery Blum & Poe. The gallery’s press representative refuted the newspaper’s claim the following day, stating: “It’s misinformation, the work is not for sale as of now and never was.” Tim Blum, the gallery’s co-founder, said his quotes were taken out of context—when he told the Times reporter that the million-dollar figure was a “good ballpark,” Blum said he was referring to the work’s value rather than actual sales price. “If it was for sale, I’d be very happy to sell it to the right buyer, and we’d work in concert with Kanye to price it and sell it—but that hasn’t happened yet,” Blum explained. The animatronic sculpture, featured in West’s music video for “Famous” earlier this summer, takes inspiration from New York painter
Vincent Desiderio
’s Sleep (2008). In West’s version, a hyper-realistic Donald Trump sleeps side-by-side with Rihanna, Anna Wintour, and several members of the Kardashian family.

(via The Art Newspaper)
On Sunday morning, thieves allegedly broke into
Kiefer
’s studio and warehouse space in the French town of Croissy-Beaubourg, some 25 kilometers west of Paris. Missing is a 10-ton lead sculpture, as well as 12 tons of raw marble, valued at €1.3 million and €1 million, respectively. Two women were taken into police custody later that afternoon, after they were found attempting to gather the lead scraps left behind by the stolen sculpture. In court on Tuesday, the women faced charges of attempted theft and damage. The defendants claimed that they had taken public transportation to the area to pick through trash, noting that they were simply observing the lead scraps since they would be too heavy to carry away. Though the prosecutor recommended a two-year jail sentence for the women—including a one-year suspended sentence—the court instead granted their release, which the prosecutor plans to appeal. In 2008, 7.5 tons of lead works were stolen from Kiefer’s former studio; they were recovered in poor condition shortly after the theft.

(Artsy)
Schoenstadt sent an email to some 200 of the city’s female and female-identifying artists, inviting them to gather together at Downtown L.A. gallery Hauser Wirth & Schimmel on Sunday afternoon. She also asked them to forward the invitation to fellow artists identifying as women, hoping to gain, literally, a critical mass. And she did. A group of 733 female artists flooded around a sculpture by Jackie Winsor in the massive gallery’s central courtyard. The motivating force behind the event, Schoenstadt told reporters, was the all-female group show at Hauser Wirth & Schimmel, “Revolution in the Making: Abstract Sculpture by Women, 1947-2016,” which comes to a close this weekend. Schoenstadt’s photo op was a success in that she got us thinking about the cultural climate in which this event is happening and the historically embedded issues that women artists are still facing. But while the event has been portrayed as a congratulatory and celebratory moment, it should also be a wake-up call that women artists still have a long way to go. It’s not a question of making history—it’s a question of fighting it.

04  Two high-ranking leaders, along with four other members, of the Bronx Museum’s board of trustees have resigned over recent international projects launched by the museum’s executive director.

(via the New York Times)
Recently, the Bronx Museum of the Arts has made a significant effort to engage audiences beyond its local community through free admission, major building projects, and an international emphasis. But some of these plans have resulted in the resignation of several board members, including two who served as executives: chairwoman Laura Blanco and vice chairwoman Mary Beth Mandanas. “While many of our comments concern the executive director and her lack of transparency, we are equally focused on the broader system that has been constructed to erode the power of the board,” the pair wrote. Members of the board also found logistical fault with a plan to exchange artworks with a museum in Cuba, as well as a $2.5 million project to gift a statue to the City of Havana. Though remaining board member Joshua Stein said that the concerns are being addressed, he also noted that the sculpture project “fits well with our interest, as an institution, in Cuban art.” However, Bronx artists and art advocates argue that the museum fails to represent exiled Cuban artists, as well as other Latino communities present in the Bronx. On Wednesday, the museum announced two replacements to serve as chair and vice chair, one of whom expressed that “the board of trustees fully supports the vision and programs that our executive director, Holly Block, has set in place and we are dedicated to pursuing them.”

05  A number of artists, museum directors, and arts educators sued the Israeli government in a continuation of the long-running conflict between the two groups.

(via The Art Newspaper)
The suit was filed against the Israeli ministry of culture in July, though it went relatively unnoticed in the mainstream press at the time. The current culture minister and former military censor Miri Regev has bred controversy and resentment in the Israeli arts community after she proposed a so-called “loyalty test” for public funding. Artists are concerned that the criteria of the potential law—which imposes fines and other penalties for works that involve “violence or racism, defacing the flag, or denying Israel’s existence as a Jewish and democratic state”—would create a climate of self-censorship, with institutions hesitant to risk organizing politically charged exhibitions out of fear that they might lose funding. Protests against the proposal and the right-wing government have taken place throughout the summer. The recent lawsuit aims to put the government under increased scrutiny, demanding that the culture ministry and Israeli Council for Culture and Art reveal their respective criteria for appointments as well as their decision-making process.

06  French photojournalist Marc Riboud, renowned for his iconic anti-war images, died this Tuesday in Paris at the age of 93.

(Artsy)
Riboud
’s spellbinding images of war, protest, and everyday life captured both the travails and triumphs of his generation. Encouraged by the almighty father of photojournalism
Henri Cartier-Bresson
(who later invited Riboud to join his famed Magnum collective), he traversed the globe, capturing a changing political and social landscape. He was one of the only photographers allowed access to both North and South Vietnam in the 1960s as well as one of the first Westerners to photograph Communist China. One of his most searing photographs ended up in the pages of TIME Magazine in 1967: an image of 17-year-old high-school student Jan Rose Kasmir in the thick of an anti-Vietnam War protest at the Pentagon. The photograph, Flower Child, crystallized a moment when extreme tension and tenderness mingled. “What was so amazing about Marc was his true commitment to peace,” Kasmir told Artsy upon the news of Riboud’s passing. While Riboud’s romantic approach to photojournalism was occasionally reproached by critics, the sense of hope that radiates from his work has served as a model for many of today’s most widely shared images.

(via ArtsProfessional)
Though on-going projects funded by European Structural and Investment Funds (ESIF)—including those benefiting arts organizations—will continue to receive full funding even after United Kingdom’s exit from the European Union, the organizations may face delays in receiving their funding. Despite short-term assurances from a representative of the EU that “the referendum result changes nothing about eligibility for these funds,” some projects have been left waiting for approved funds to be disbursed while others are still waiting for initial approval. “We submitted an outline funding application in March and a detailed proposal in July, and we’re being encouraged to press ahead with our application. We are hoping to receive an offer letter next month,” said Ross Williams, CEO of Creative Kernow, an organization that supports creative endeavors in Cornwall. Should British organizations lose their EU funding, the Arts Council England plans to assess each case individually and to publish a report this month on how it will work with the government during the Brexit negotiations.

08  The New York Times is axing regional arts coverage amid a broader reorganization of the paper.

(via Deadline)
The move—which also terminates regional restaurant and theater coverage—means the end of local arts coverage of the tri-state area, impacting New Jersey, Westchester, Long Island, and Connecticut. Those reporters and freelancers covering regional beats were laid off, reportedly fomenting concerns that further cuts could hit the Grey Lady’s culture desk as the newspaper restructures for a digital age. Although the paper claimed the move was not made for economic reasons, local coverage and the limited audience for it has becoming increasingly harder to justify. The move has the potential to damper the arts and cultural life of the regions that will lose coverage, given that galleries, theaters, and restaurants often rely on publicity to attract visitors and patrons. As one of the laid-off freelancers said, “Local communities are the biggest losers, since a new theater run or restaurant won’t get the opportunity to reach the sophisticated audience that the Times attracts.”

09  A 16th-century painting by Italian artist Parmigianino may soon be inducted into the Getty Museum’s collection, pending a British export license.

(via the L.A. Times)
The J. Paul Getty Museum has its eyes on
Parmigianino
’s Virgin With Child, St. John the Baptist, and Mary Magdalene (ca. 1530-40), a late Renaissance work up for sale by Sotheby’s after being in private hands for over 400 years. The painting’s seller and value have yet to be revealed. “It’s in fantastic condition, which is so rare for this period,” Getty director Timothy Potts said of the painting, which was previously loaned to the museum. Yet the planned acquisition is still dependent upon the approval of an export license. According to British law, a foreign purchase of a work of cultural significance can be vetoed if a British institution makes a competitive offer. If the acquisition goes through, it will be the first Parmigianino painting to be added to the Getty’s collection, joining several of the artist’s drawings. The Getty encountered a similar situation in 2013, when the museum applied for and subsequently received an export license for an early
Rembrandt
self-portrait. But in 2004, the museum’s $46.6 million bid on a
Raphael
painting was rejected in favor of a competing offer by the National Gallery, with help from the Heritage Lottery Fund.

10  The British government has placed an export ban on Queen Victoria’s coronet, hoping to find someone in the U.K. willing to match a foreign buyer’s £5 million purchase price.

(via the Independent)
The diamond-and-sapphire-studded coronet was designed by Prince Albert in 1840 for his bride during the first year of their marriage. It was gifted to Princess Mary in 1922, then later sold to a London dealer who eventually brokered the current deal with an overseas buyer. Culture minister Matt Hancock is responsible for the temporary export ban, which lasts until December 27th and could be renewed through June 27th, 2017. Hancock noted that the coronet “is one of the most iconic jewels from a pivotal period in our history and symbolizes one of our nation’s most famous love stories.” Although all items of national importance that have resided in the U.K. for 50 years or more and are valued over £39,219 must apply for an export license to cross the border, not all foreign buyers play by the rules—earlier this year, a ring reportedly owned by Joan of Arc was spirited away to France without a license and will not be returned.
Artsy Editors
Cover image: Super 45 | Música Independiente, via Flickr.
Related Stories

Marc Riboud, Photographer of One of History’s Most Iconic Anti-War Images, Dead at 93

This Photo Isn’t Just a Celebration of Female Artists, It’s a Wake-Up Call 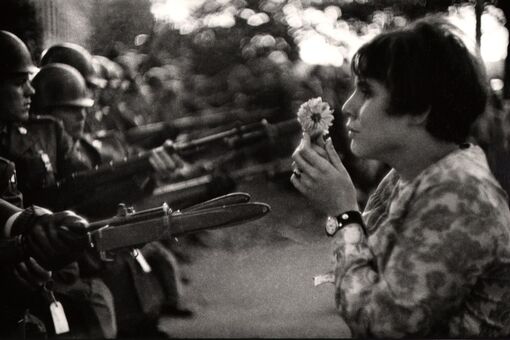 Marc Riboud, Photographer of One of History’s Most Iconic Anti-War Images, Dead at 93
Alexxa Gotthardt
Aug 31, 2016 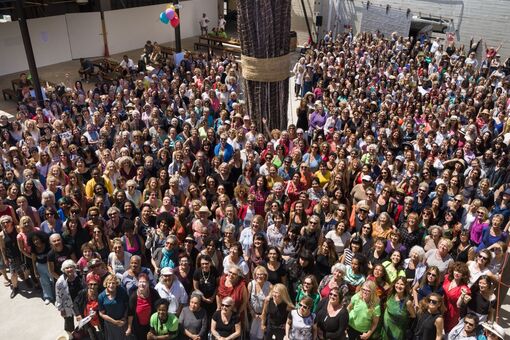 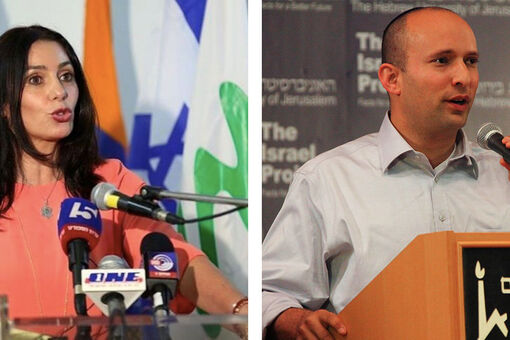