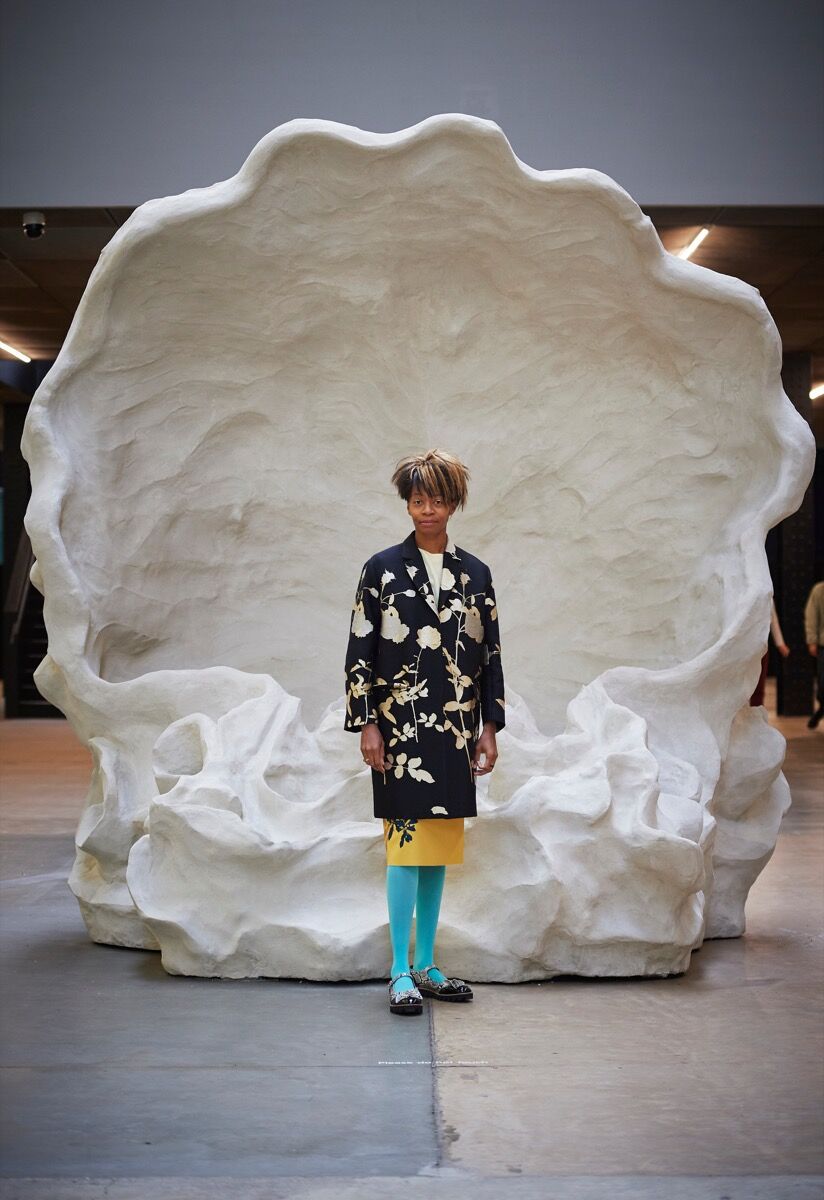 Kara Walker in front of her work, Fons Americanus , 2019, at the Tate Modern. © Ben Fisher. 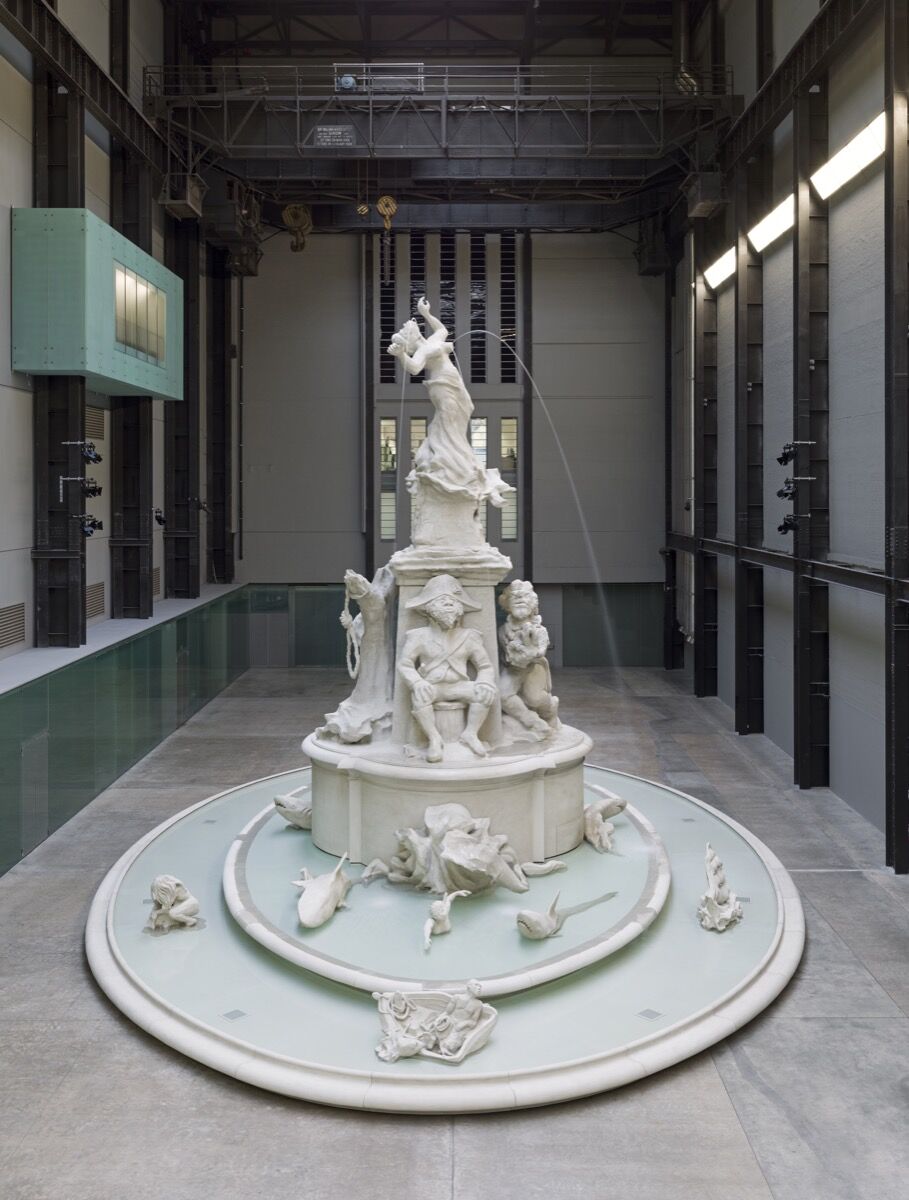 What do
Sandro Botticelli
and the transatlantic slave trade have in common? If this set up sounds like the start of a very dark joke, the punchline is deadly serious. They both popularized the image of the Roman goddess Venus standing nude on a shell—to very different ends. Botticelli’s iconic Renaissance painting The Birth of Venus (ca. 1485) became a classic art-historical example of (white) female beauty. In the age of British colonialism, English artist
Thomas Stothard
co-opted the image to promote human bondage and, more specifically, the Middle Passage across the Atlantic Ocean. His print The Voyage of the Sable Venus from Angola to the West Indies (ca. 1800) depicts a group of white cherubs ushering an Angolan woman through the sea, ostensibly to her disenfranchised doom. The picture is pure propaganda, turning the white figures into saviors, and slavery into a moral obligation. 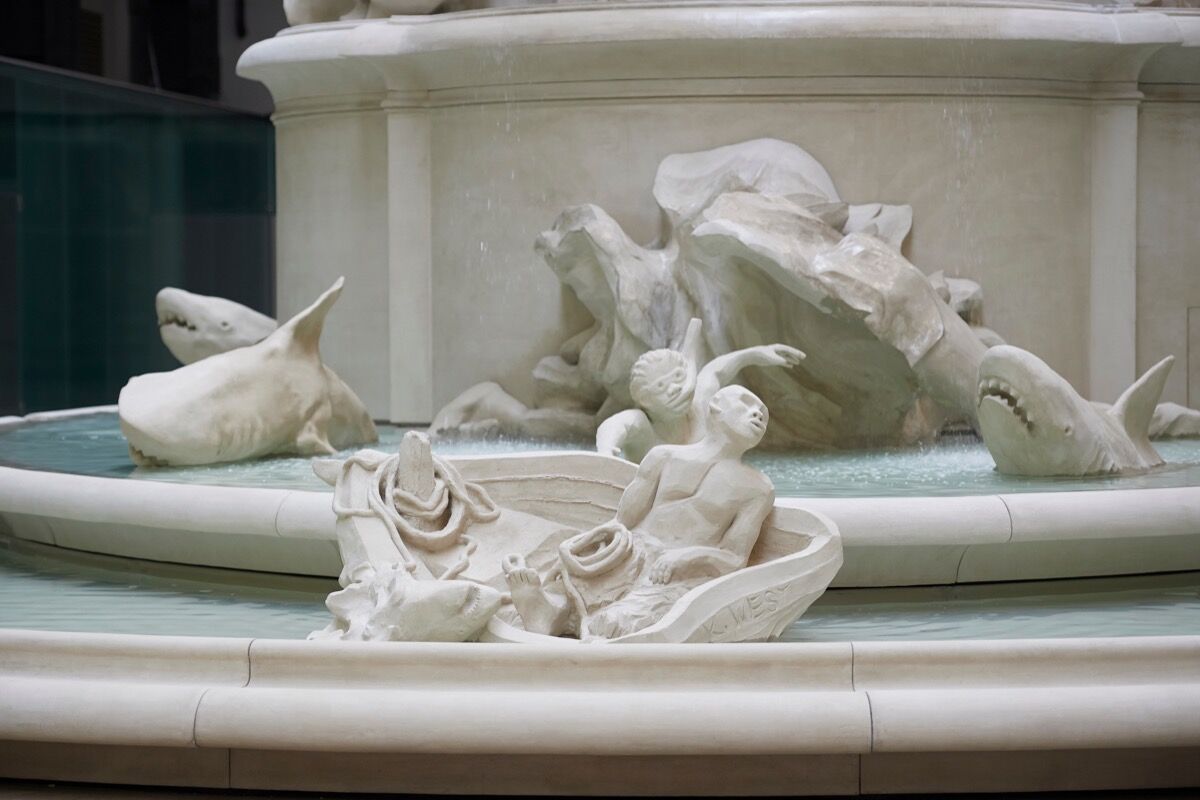 That infuriating and absurd connection sets the tone for
Kara Walker
’s deeply disconcerting new installation at the Tate Modern’s Turbine Hall. Her new 40-foot-tall fountain and the smaller shell-shaped fountain that leads up to it—collectively titled Fons Americanus (2019)—are as scathing as sculpture can get. The work reaffirms Walker’s position as one of the boldest, most ambitious artists working today—and acknowledges a fraught relationship between artist, spectacle, and viewer. Her accompanying wall text ends with the words: “Created by that Celebrated Negress of the New World / Madame Kara E. Walker, NTY.” (NTY stand for “not titled yet.”) Walker critiques any tokenism embedded in her current celebrity and condemns Britain’s colonial past.
Walker is best known for her black-and-white silhouette drawings; a major retrospective of her video work is also on view in London at Sprüth Magers, through December 21st. She first proved her prowess with public sculpture back in 2014. With support from the public art nonprofit Creative Time, she erected A Subtlety (2014)in Williamsburg, Brooklyn’s former Domino Sugar Factory. The piece—which constituted a 75-foot-long, sugar-coated sphynx—was anything but subtle. Its form resembled the archetypal character of the “mammy,” which was used in the past to perpetuate the idea that black women were perfectly happy being slaves. 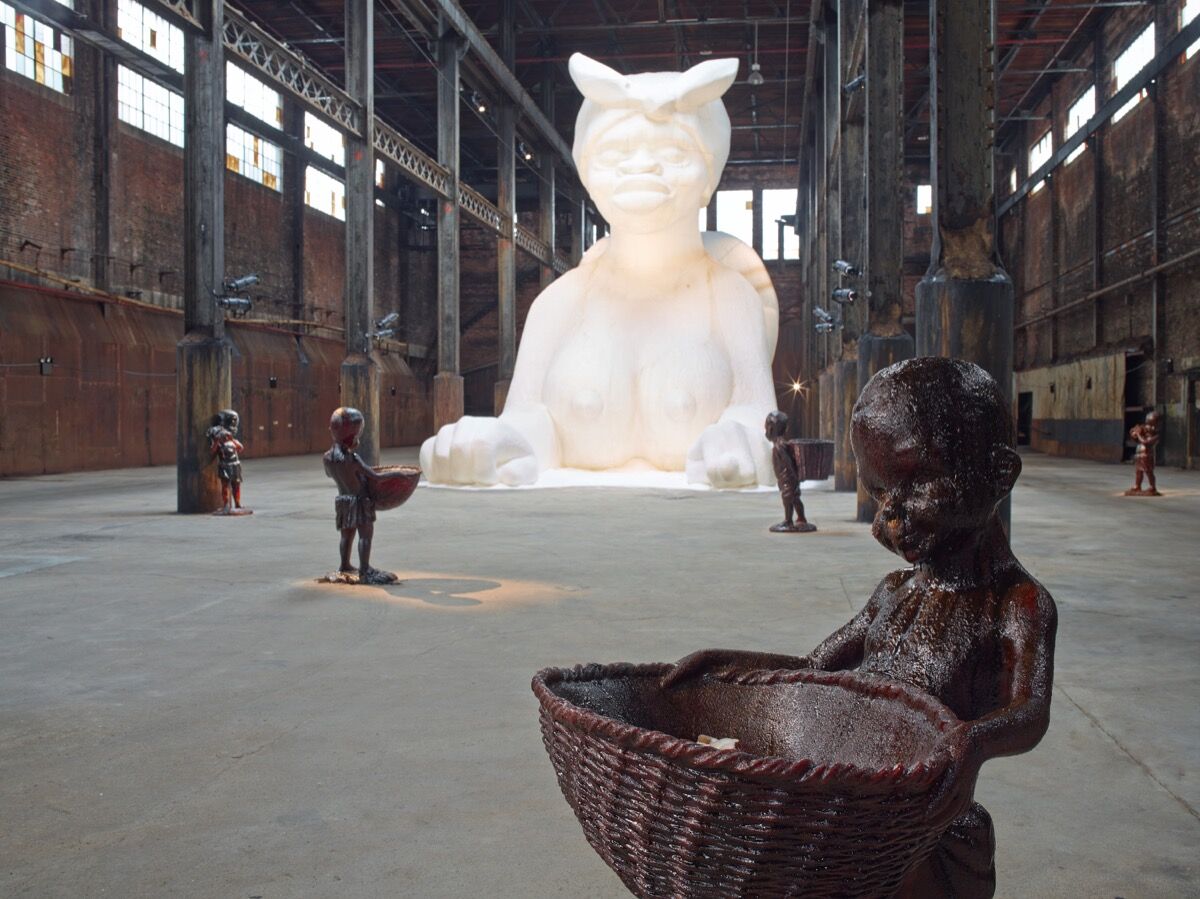 Advertisement
The new Turbine Hall work similarly invokes popular imagery and cultural history. In addition to the Stothard print, Walker references the painting of 19th-century American artist
Winslow Homer
. At the bottom level of her tiered fountain, among sharks and billowing-sailed ships, a man reclines in a boat labeled “K. West.” The figure derives from Homer’s famous painting The Gulf Stream (1899), which features a man in a boat with “Key West” scrawled on the stern. But to the contemporary eye, the demarcation suggests Kanye West—a fraught pop-cultural figure both inside and outside the black community. On the middle tier, a tree with a noose around its limb eerily evokes a lynching, while a seated man with a full beard references black men who have rebelled against white supremacy: Toussaint L’Ouverture, Marcus Garvey, and Cuffy, who led a slave rebellion in Guyana. Elsewhere, one woman snorkels while another figure appears to drown.
One of the work’s more quietly devastating moments occurs in the smaller shell-shaped sculpture. As viewers approach, they can see the sculpted head of a boy inside. Tears leak out of one eye, serving as the fountain’s stream. “Water’s a particular metaphor within the piece,” explained Tate curator Priyesh Mistry, alluding to “the journey connecting Africa with America and then back to Europe,” and “the way the empire was built on the seas.” He added that “everyone is implicated in that history.” 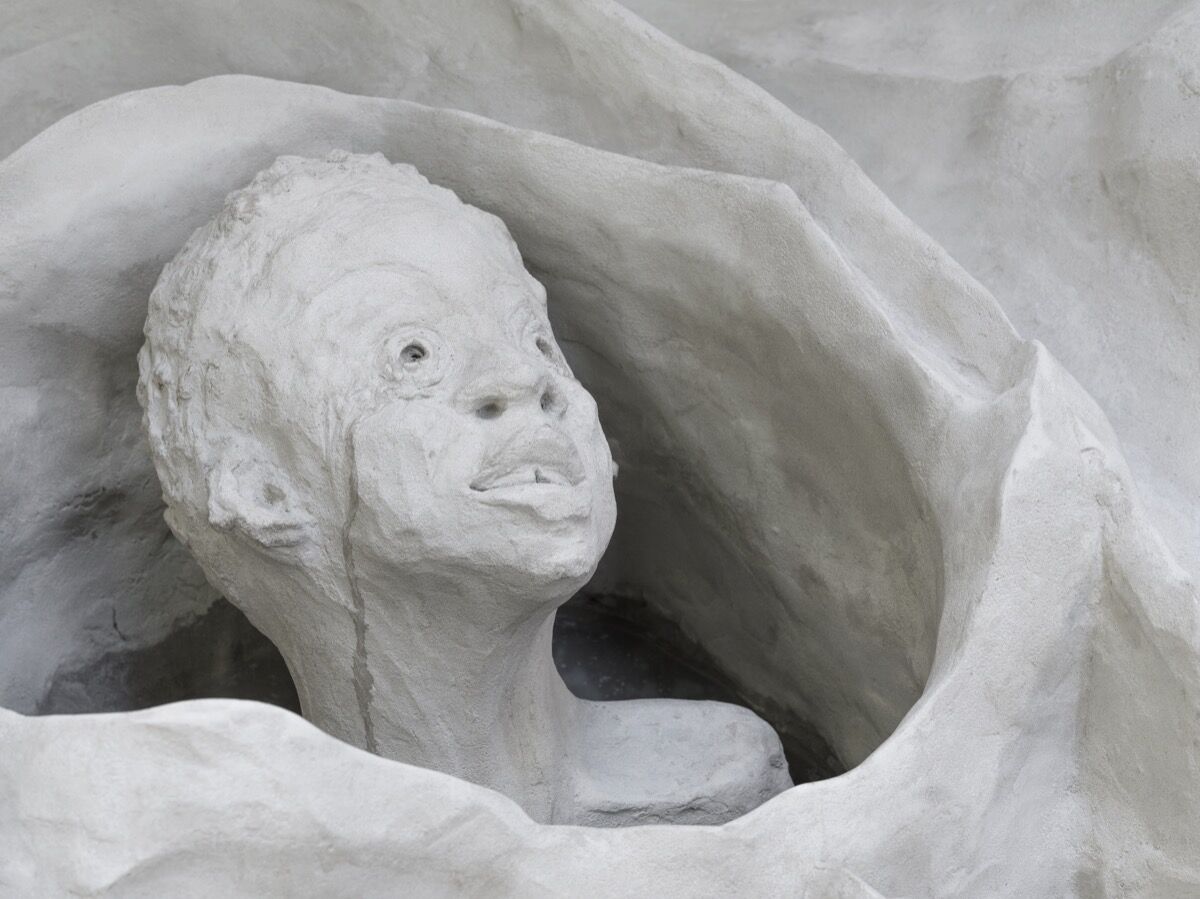 Walker’s greatest inspiration for Fons Americanus occurred during a drive to Heathrow airport, after she’d conducted a site visit at the Tate. When the artist passed the Queen Victoria Memorial near Buckingham Palace, she got the idea to build a similarly tiered fountain. Though the fabricators of the piece, Brighton’s Millimetre studio, used recyclable, eco-friendly cork as the base, Fons Americanus has a chalky-white, rough finish that resembles the local Portland stone responsible for many of London’s public monuments. “She’s very much thinking about Baroque fountains that can be found all over Europe,” said Mistry. “At night, when her work is lit up by spots, it looks like you’re in an Italian palazzo.”
At the top of the fountain, Walker has placed her own version of Venus: a black woman leaning back in either anguish or ecstasy, with water spouting from her nipples and neck. An offering from her own body animates the entire structure. She’s a generative goddess, offering herself up for the viewing pleasure of the masses. An uncomfortable dissonance between message and medium resounds. “The form of a fountain is so joyous,” said Mistry. “Kara is very conscious of what she’s doing, by using it to entice people into these stories.”
Alina Cohen
Related Stories