Normally, the presence of E. coli next to an urban fountain would be cause for alarm. But not for
Katja Novitskova
, who has snuck the toxic bacteria—or, at least, a drastically enlarged image of it—into New York’s City Hall Park.
The work is part of the Estonian artist’s Public Art Fund installation, “EARTH POTENTIAL,” which opens on Thursday and runs through November 9th. Novitskova seems especially tickled by the prospect that tourists might use the sculpture as a backdrop for summer selfies. The supersized E. coli, whose billowy, limb-like forms she likens to a “swamp monster,” joins a diverse cast of other animals and organisms in the park: A hydra floats across the surface of the planet Venus; a supersized worm wriggles in front of Saturn’s largest moon.
Novitskova, part of an advance guard who began working under the umbrella of so-called Post-Internet Art, has a signature: oversized photographic prints on metal, akin to promotional movie standees. She occasionally incorporates iconography that appears to be borrowed from scientific manuals or Powerpoint slideshows—swooping arrows are a repeated motif. At the 57th Venice Biennale, where she is currently representing her native country, Novitskova conjures unease through presentations that could just as easily seem corny or contrived: a suite of automatic baby-rocking machines, for instance, or a bathtub full of bright orange plastic critters. 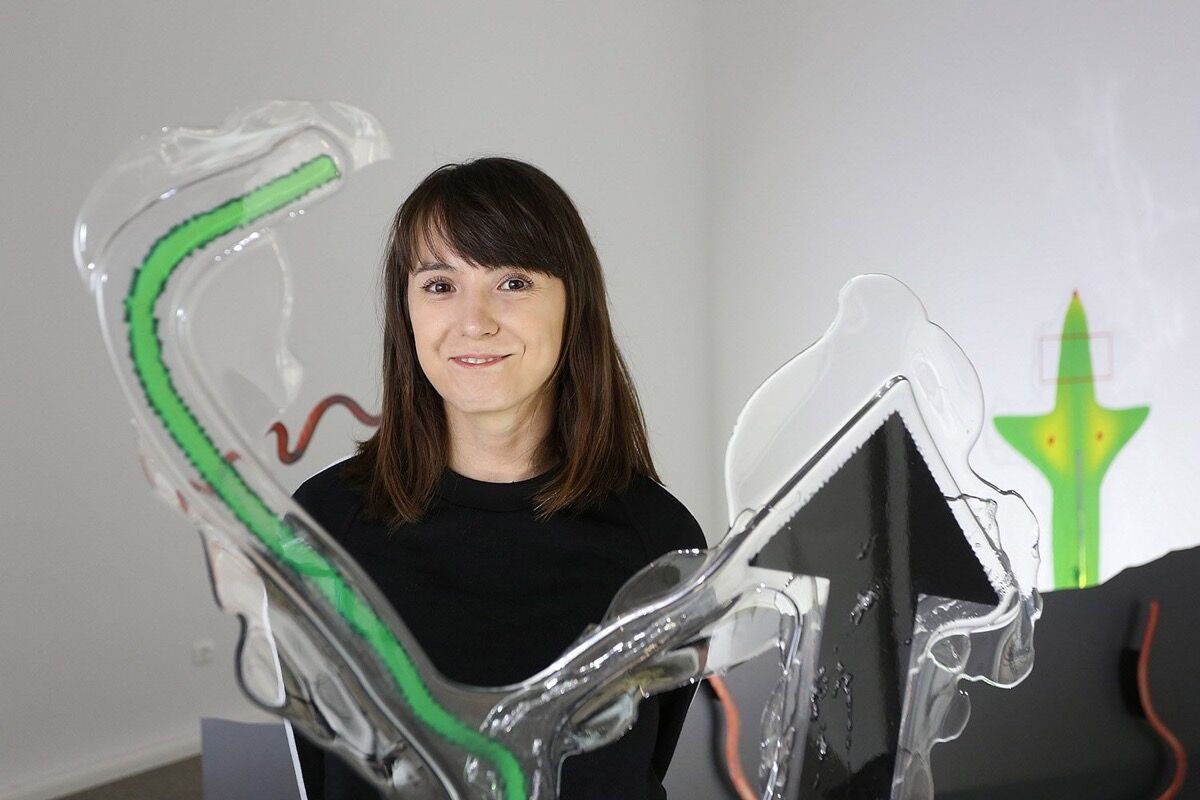 Her work consciously toys with the nature of digital images, and how they’re made, circulated, and consumed. Around 2012, her subject matter skewed toward the adorable, like giraffes or polar bears, or “cute virality,” as the artist puts it. “Why are certain images very popular?” she recalls wondering. “I was translating that to artworks, to make an experiment, if it would work the same. And in a very stupid way, it did.”
Novitskova’s vision has gotten a bit less cuddly in recent years. “I’m going toward darker parts,” she tells me. For this public installation in New York, she wanted to create something site-specific, but the Berlin-based artist hadn’t had many personal encounters with the city—except through movies. “In every other sci-fi movie there’s an invasion, or a climate catastrophe, that’s being visualized in lower Manhattan,” she says. And so, Novitskova imagined City Hall Park as a landing site for something alien. Advertisement
“I thought it could be fun to activate some of these strange forms that are not exactly from the movies—they’re from real life—but they do have these associations,” she says. The biological menagerie she’s brought to the park mingles the whimsical—like a huge frog, its webbed foot splayed over the surface of an enormous Earth—with the unknown or ominous. Are the creatures dangerous, I wonder? “They’re dangerous because they’re weird.”
While the artist doesn’t have a scientific background, she’s given herself a layman’s crash course in the current research terrain. She prowls message boards and online communities like Zooniverse, a self-described “people-powered research” hub that asks volunteers to analyze scientific or biological databases. (“It’s very meditative for the people who do it,” she explains. “Analyzing terrain on Mars, counting proteins on the edge of a cell, classifying chimps…”)
Novitskova funnels this research into her work, for which almost all of the visual material is either downloaded or screenshot from the internet. If it’s not high-res enough to reproduce seamlessly, she doesn’t stress over a little pixelation; working with degraded digital material helps her separate her work from that of a “commercial photographer making beautiful animal images,” she says. 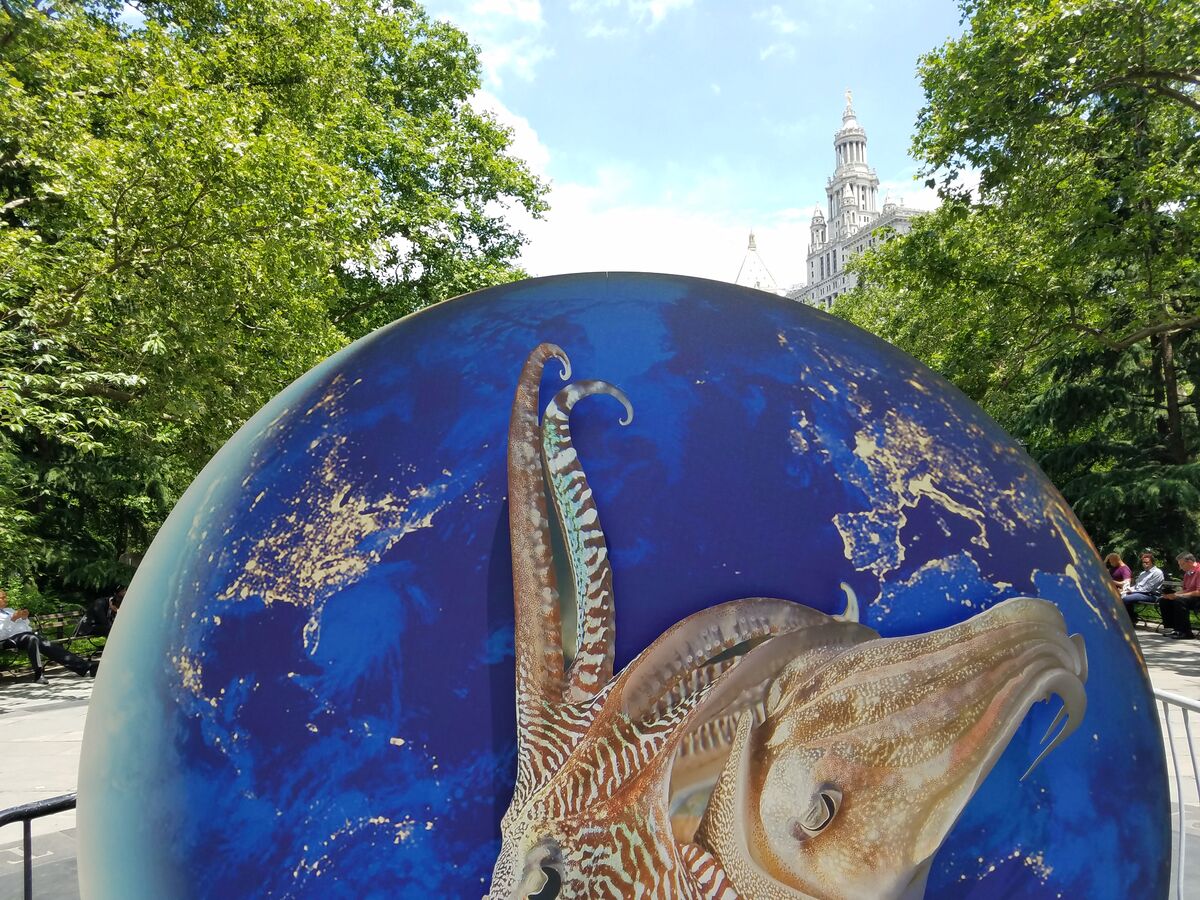 Those deep dives online have also brought the artist adjacent to the conspiracy-theorist scene. Her frog in City Hall Park, she says, is a sneaky nod to the wild belief that a race of reptilians is in charge of the global order. Then there’s the collaborative community seeking visual evidence of aliens in NASA photography at UFO Sightings Daily—the artist jokingly thinks of the site as a bizarro parallel to Contemporary Art Daily—which has been a source of imagery and inspiration.
Novitskova’s impactful and photo-driven sculptures made me think of one high-profile tweeter of conspiracies: a certain President Donald Trump. A recent Washington Post article sets a typical scene of an intelligence briefing: “As they huddle around the desk, Trump likes to pore over visuals—maps, charts, pictures and videos, as well as ‘killer graphics,’ as CIA Director Mike Pompeo phrased it.” In a certain superficial sense, Trump would likely find a lot to celebrate in “EARTH POTENTIAL,” with its bold, easily digestible images. Novitskova’s sculpture can often resemble an educational or research document that has been deconstructed down to its eye-pleasing bones. Come to think of it, ardent Trump supporter and Infowars shouter Alex Jones (who’s supplied of a number of the President’s favored conspiracy theories) might also relate to the material—especially a sculptural representation of a genetically modified human embryo. The morning I saw Novitskova’s show I had watched a clip of Jones’s interview with Megyn Kelly, during which he ranted about “animal-human hybrids” being created in labs.
As such, Novitskova’s aesthetic cannily taps into a lot of the current, dysfunctional zeitgeist: a conspiracy culture that simultaneously disregards science as fake, and hyperbolizes its findings to spin tales of how the “Era of Human-Animal Hybrid Chimeras Has Begun”; the President’s hunger for information conveyed via infographics; a high-tech world in which sci-fi and reality seem increasingly hard to discern from each other.
Given all of this, I ask Novitskova if she is, in general, optimistic about our collective future. “I am,” she says, “but I think the healthiest reaction now is to focus on the horror. You’re forced to face your fears, and be uncomfortable. But it has to be a guided discomfort, that will lead you to ScienceDaily—not Alex Jones.”
Scott Indrisek
Related Stories