KAWS and the Campana Brothers Join Forces at Design Miami/ 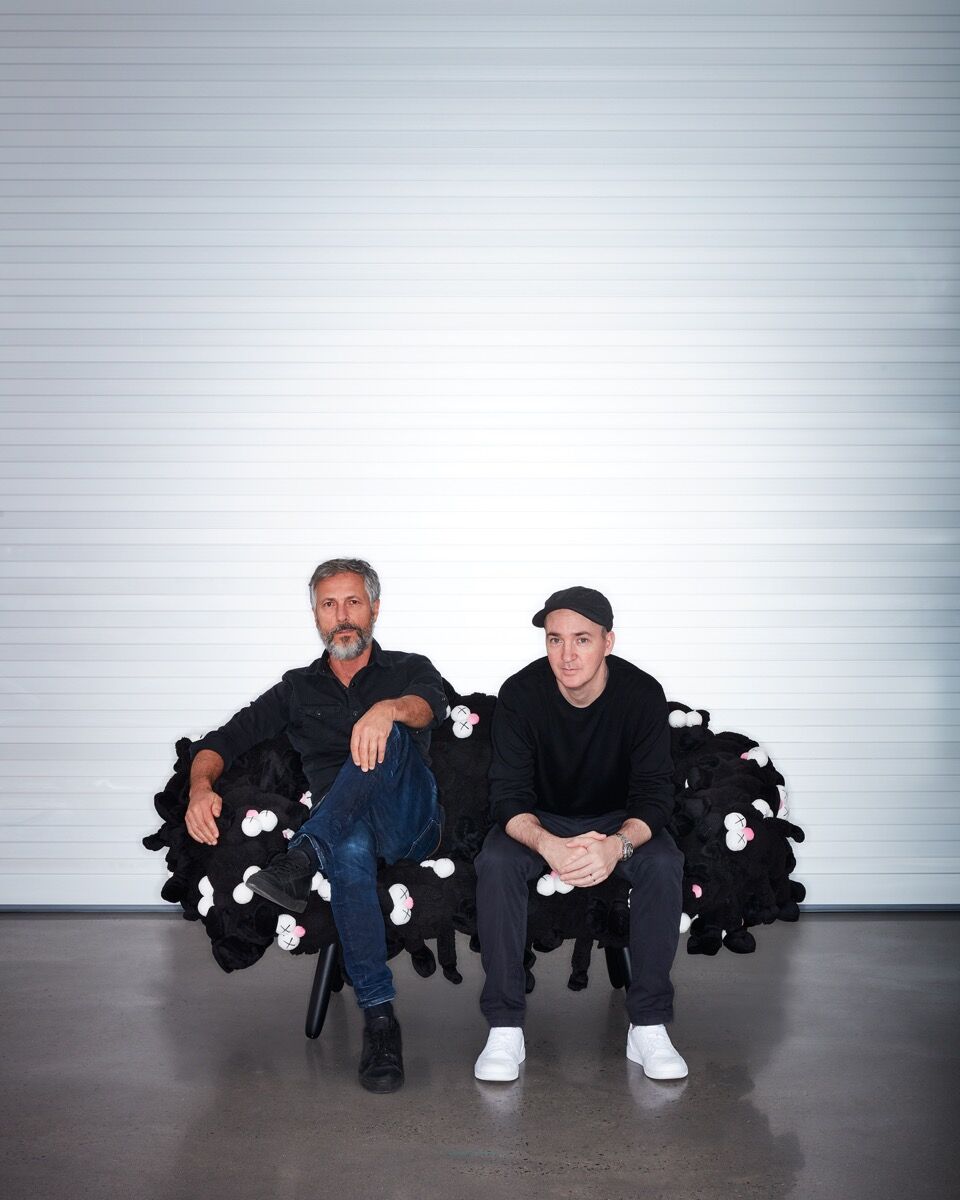 Portrait of Humberto Campana and KAWS. Courtesy of Friedman Benda.

A new collaboration between the artist
KAWS
(Brian Donnelly) and star designers
Humberto
and
Fernando Campana
turns stuffed animals into plush furniture. At Friedman Benda’s booth at Design Miami/, the trio is exhibiting a playful new line of chairs and sofas. Each piece consists of a simple metal armature, overlaid with a sewn-together assortment of about 75 to 120 of KAWS’s iconic soft toys. The furry friends each feature two white, crossed-out eyeballs; a pink button nose; dangling arms and legs; and a “KAWS” signature stitched into one foot. Four thin wooden legs protrude at the bottom—spindly, slanted, and rounded at the end. 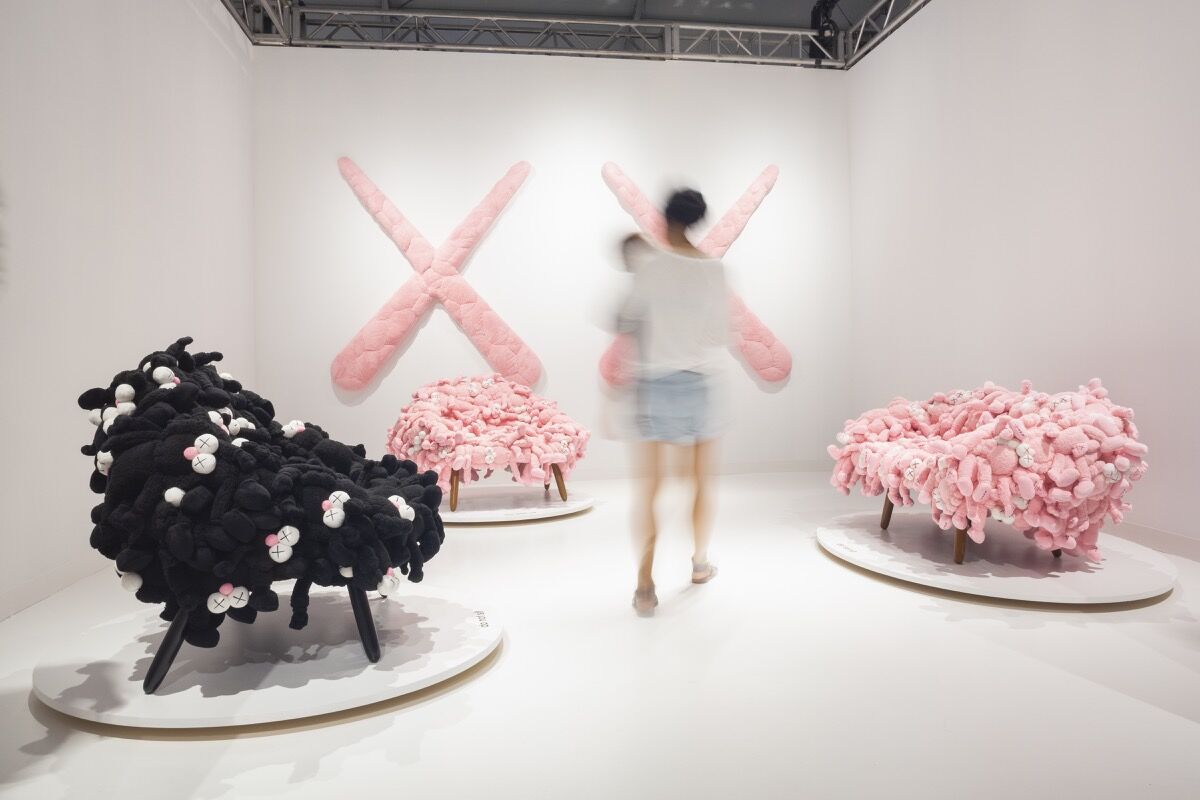 The concept came together seamlessly, says Friedman Benda founder Marc Benda. According to him, KAWS already owned a few pieces by the Campana brothers, including a fuzzy “Bolotas” chair and a couch made from leather teddy bears. Indeed, the Campanas have created an entire series of furniture from stuffed animals (pandas; a menagerie of sharks, lions, tigers, and alligators) since the early 2000s. KAWS wanted to merge their designs with his limited-edition toys. He commissioned the brothers to make a prototype for him, in blue. “This was all a very straightforward and super friendly collaboration,” says Benda. “The outcome was so cool that both sides decided to do something they could share with the public.”
In recent years, of course, brands ranging from Uniqlo to Air Jordan have commissioned KAWS as a collaborator—his bold,
Pop
-inspired aesthetic has attracted a diverse group of enthusiasts with a wide range of budgets. The Brazilian-born, São Paulo–based brothers are fixtures in the world of fine design, who have also veered into fashion and set design. The Museum of Modern Art owns five of their works, including their well-known Vermelha chair (1993), whose seat and back are made from tangled red cord. “When we first met KAWS, we understood his ability to tell those stories, that you will always remember,” Humberto Campana offered via a statement from the gallery. “KAWSxCampana created a common story of referring to memories of childhood, affection and well being. We are both storytellers.” 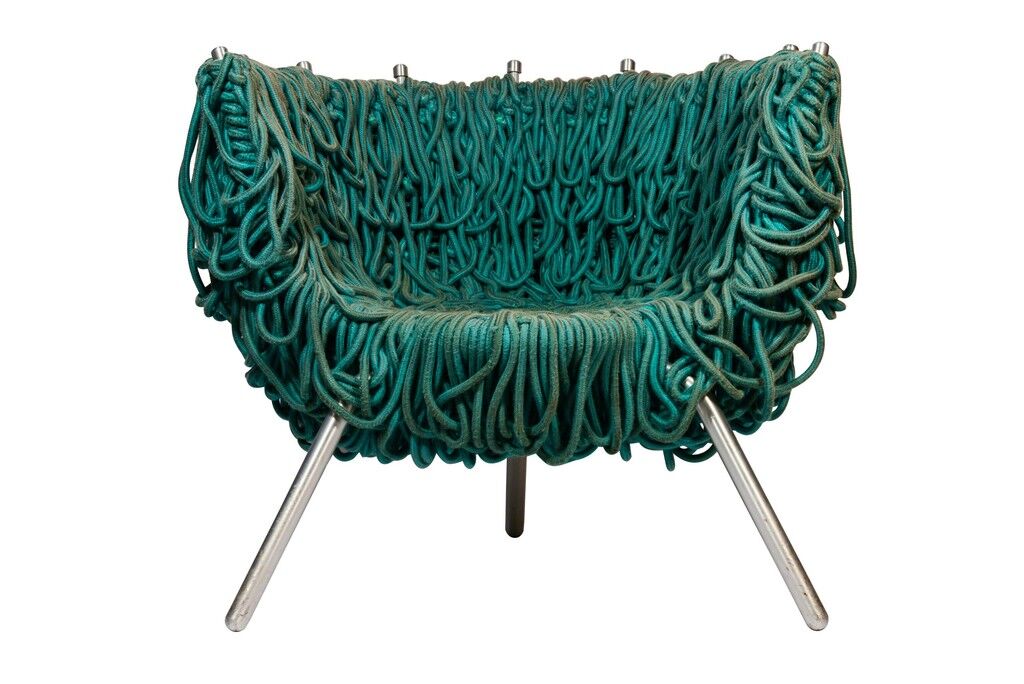 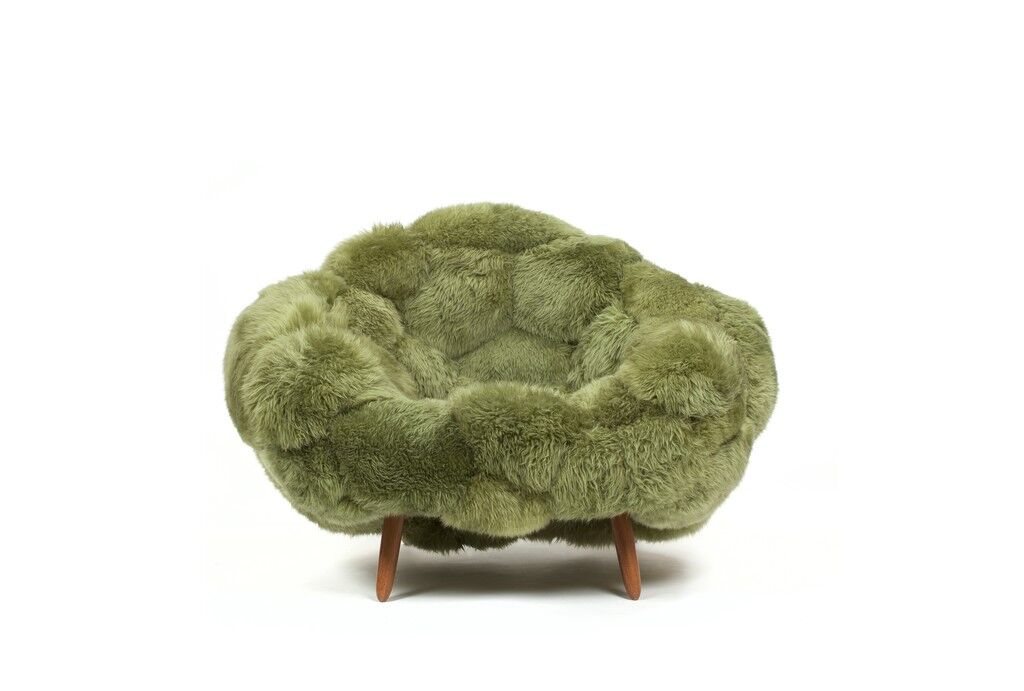 Humberto and Fernando Campana
Bolotas Armchair (Pistachio), 2015
Friedman Benda
Advertisement
Lelia Arruda, Friedman Benda’s in-house exhibition designer, created the concept for the booth. Light-pink wallpaper, patterned with the crossed-out eyes and round noses of KAWS’s creatures, lines the outside of the booth. A pink chair, black chair, and pink sofa all sit atop raised, circular platforms. On the back wall, Arruda has mounted two large-scale pink, plush X’s, stitched together to resemble the hides of multiple KAWS toys. The booth—like KAWS’s work—is a curious mixture of bubblegum-pink cuteness and morbid strangeness.
The three pieces on view had all sold out by Thursday afternoon. According to Benda, there’s already significant overlap between KAWS fans and Campana collectors—they jumped at the opportunity to purchase work that united the talents. Though he wouldn’t disclose the names of the purchasers, Benda did offer that the chairs and sofas will “go to pretty amazing homes.”
Alina Cohen is a Staff Writer at Artsy.

Correction: A previous version of this article contained an error which incorrectly identified the Museum of Fine Arts, Houston as the purchaser of one of the pieces on display at Design Miami/. While they did acquire a piece, it was not part of the Design Miami/ presentation. The article also incorrectly used the term “belota” instead of “Bolotas” in reference to a piece by the Campana brothers.