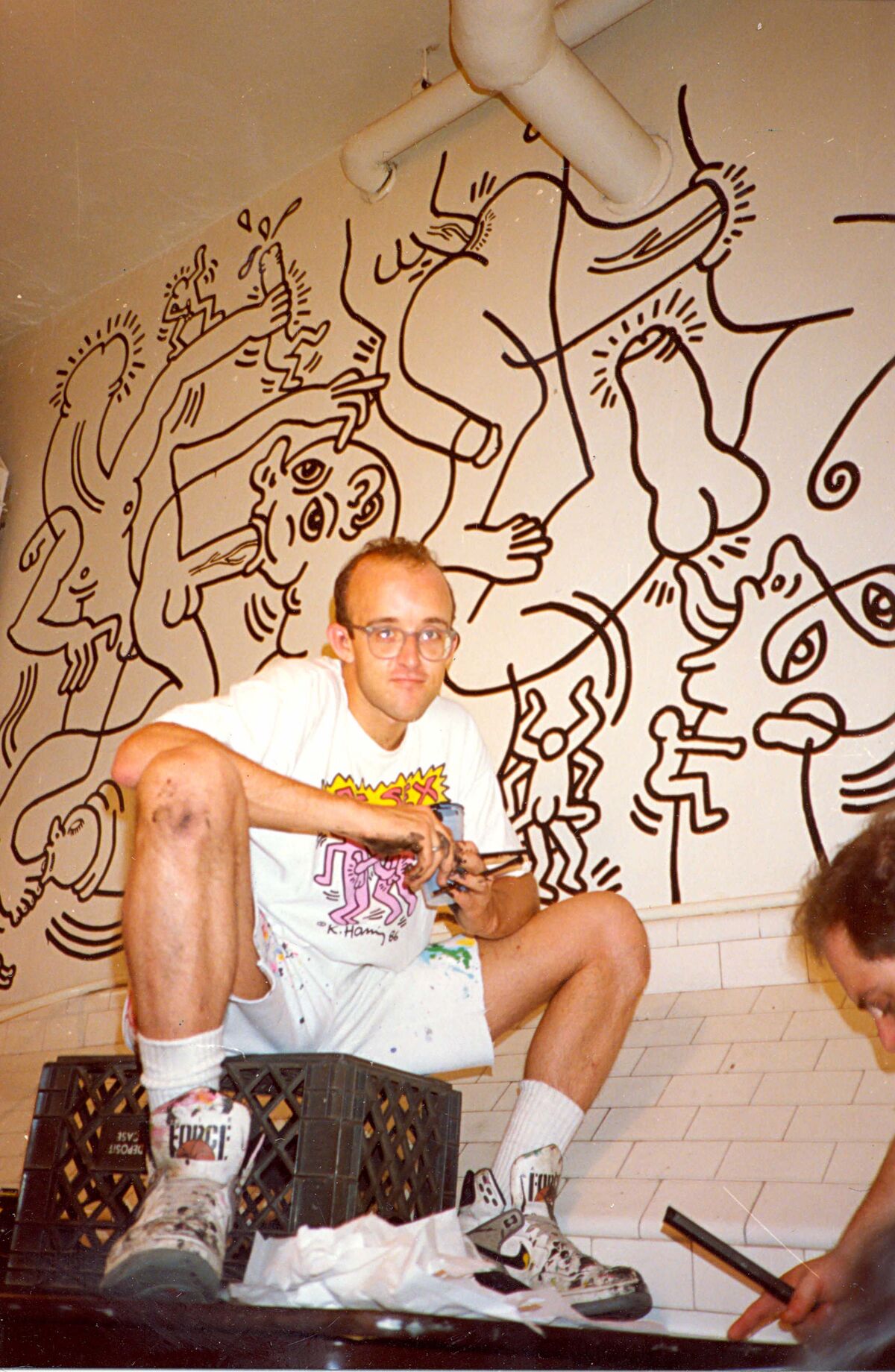 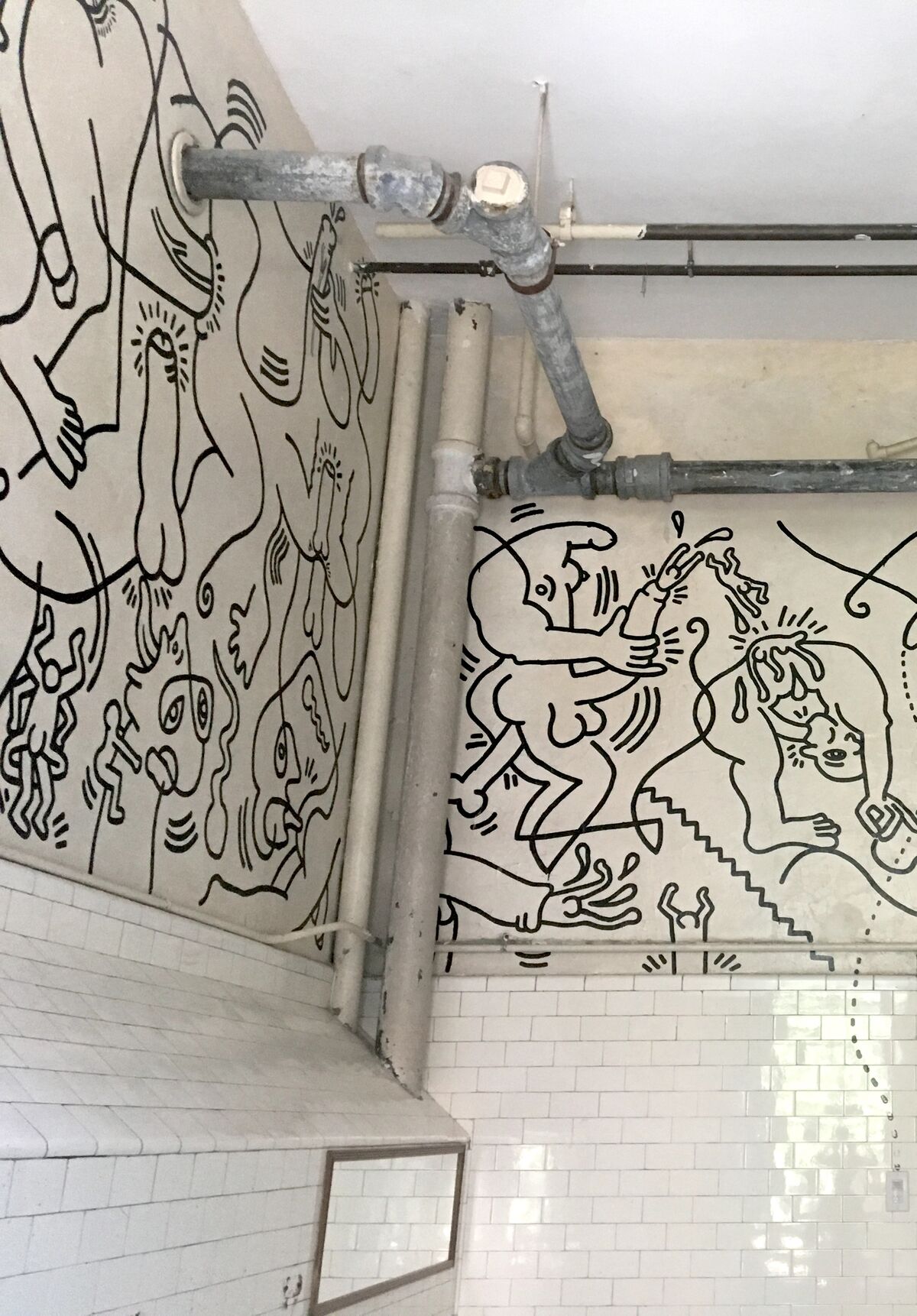 Installation view of Keith Haring, Once Upon a Time, 1989, at the LGBT Community Center, Manhattan.

Masterpieces don’t often end up in public bathrooms.
But boundary-defying street artist
Keith Haring
didn’t care for the distinctions about where art could and should be made; his canvases were Manhattan’s buildings, streets, and subways. On them, he scrawled ecstatic, aroused bodies that radiated with bursts of energy.
Many of Haring’s public paintings have disappeared since they emerged from his prolific brush in the 1970s and ’80s. The city government treated them as acts of vandalism, or they were rubbed away by the wear and tear of time. Luckily, though, one of his most audacious, masterful murals still stands—and you can find it in a bathroom that’s open to the public every day of the week.
On a recent afternoon, I headed to the Lesbian, Gay, Bisexual, and Transgender Community Center on West 13th Street in downtown Manhattan. A large rainbow flag flapped above the entrance, and a man at the front desk directed me up a short flight of stairs: “The Haring’s just up there. Hang out as long as you want.” From just outside the bathroom, the corner of a painting was visible through a frosted glass bathroom door that’d been left ajar. It shows an erect penis emanating Haring’s signature squiggles. 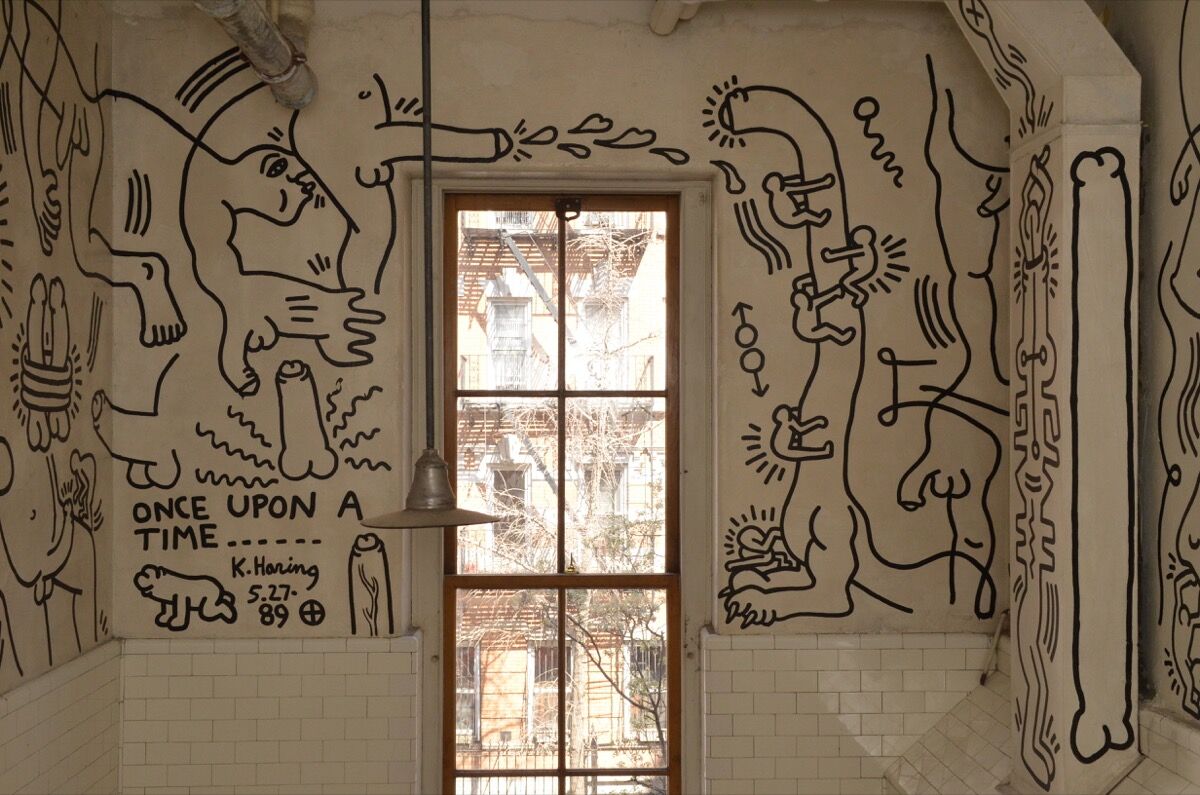 Haring was gay and active in the 1980s LGBT rights movement, and made striking posters and paintings advocating for safe sex, awareness, and research around HIV and AIDS. One of his most searing pieces shows three figures with large X’s on their torsos, and hands over their eyes, ears, and mouth. Slogans that read “Ignorance = Fear” and “Silence = Death” box them in.
When the LGBT Community Center invited Haring in 1989 to create a work in their new 13th Street home, he enthusiastically accepted, choosing to locate the mural in the building’s second-floor men’s bathroom. “The work really powerfully captures a time and an energy when our community was fighting for our lives— trying to stay resistant, and celebrating what we could,” says Glennda Testone, the LGBTQ Community Center’s Executive Director.
Haring titled the piece Once Upon a Time, a nod to the gay community’s halcyon days of free love. Over the course of several days, he covered every un-tiled surface of the bathroom with turgid, squirting penises of all sizes. Some are attached to buff male bodies tangled together in pleasure. Others float like happy clouds or hungry dragons. One impressively large specimen hovers over a line of small figures who are either dancing the conga or enjoying an orgy.
When he painted the mural, Haring was fighting his own battle with AIDS; he’d been diagnosed just a year before, in 1988. During the late 1980s, he and his community not only faced the fear of death, but also disregard and antagonization from the Reagan administration, which simultaneously laid blame on the gay community and refused to put resources towards AIDS research. 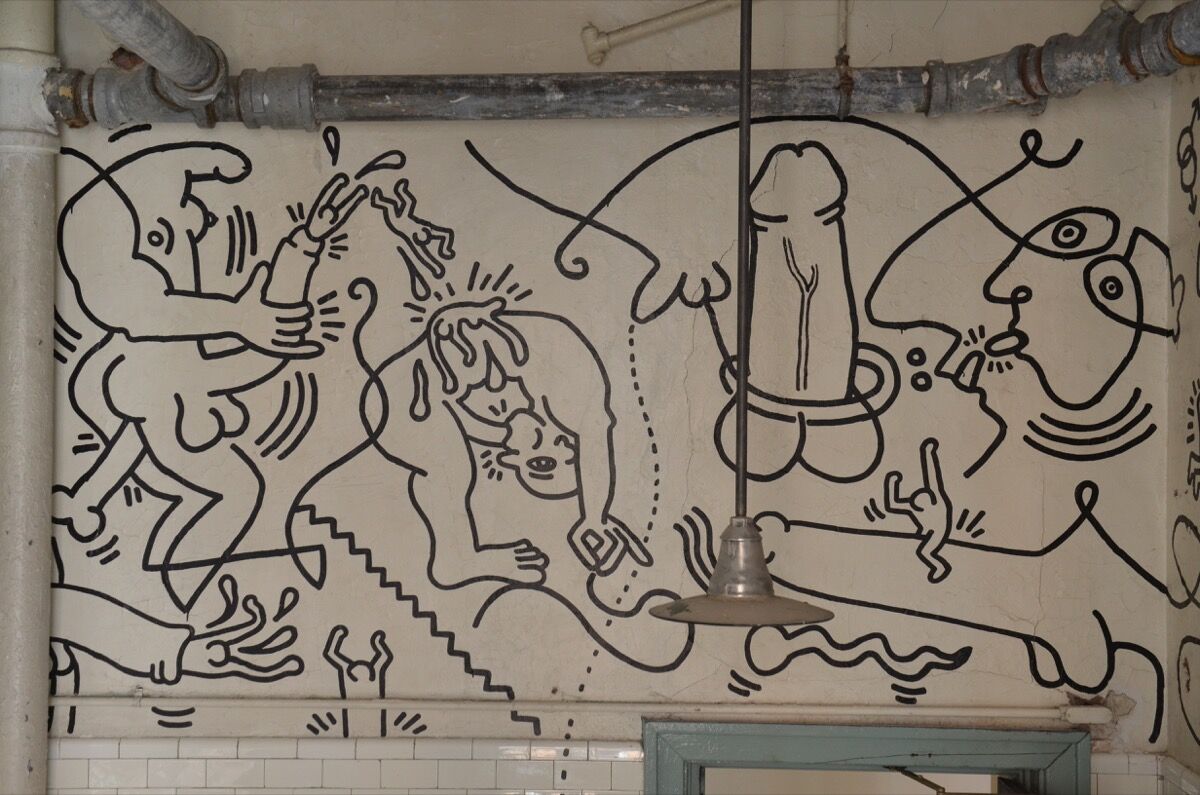 Advertisement
Despite the climate of fear and anxiety, however, Haring’s painting was celebratory. It was also an act of resistance. As Testone points out, it was his “vision of a world before AIDS—a celebration of gay male sexuality and resiliency at a time when mainstream America was quite terrified of gay male sexuality.”
Once Upon a Time was restored and opened to the public in 2012. Anyone who wishes can enter the light-filled room and, as the receptionist noted, stay as long as they like within the bounds of the Community Center’s hours (between 9 a.m. and 10 p.m. Monday through Friday and 9 a.m. and 9 p.m. on Sunday). The space is now more of a monument than a working bathroom—the sinks and stalls were removed in the ’80s—and it can accommodate a good number of people who come daily to sit, dance, and even do their homework under Haring’s happy, sex-positive iconography.
“I wish Keith were alive to see how the community interacts with this mural, because people are so inspired and in awe,” says Testone. “I really see the mural as a motivation to keep fighting and keep going forward.”
Alexxa Gotthardt
Related Stories