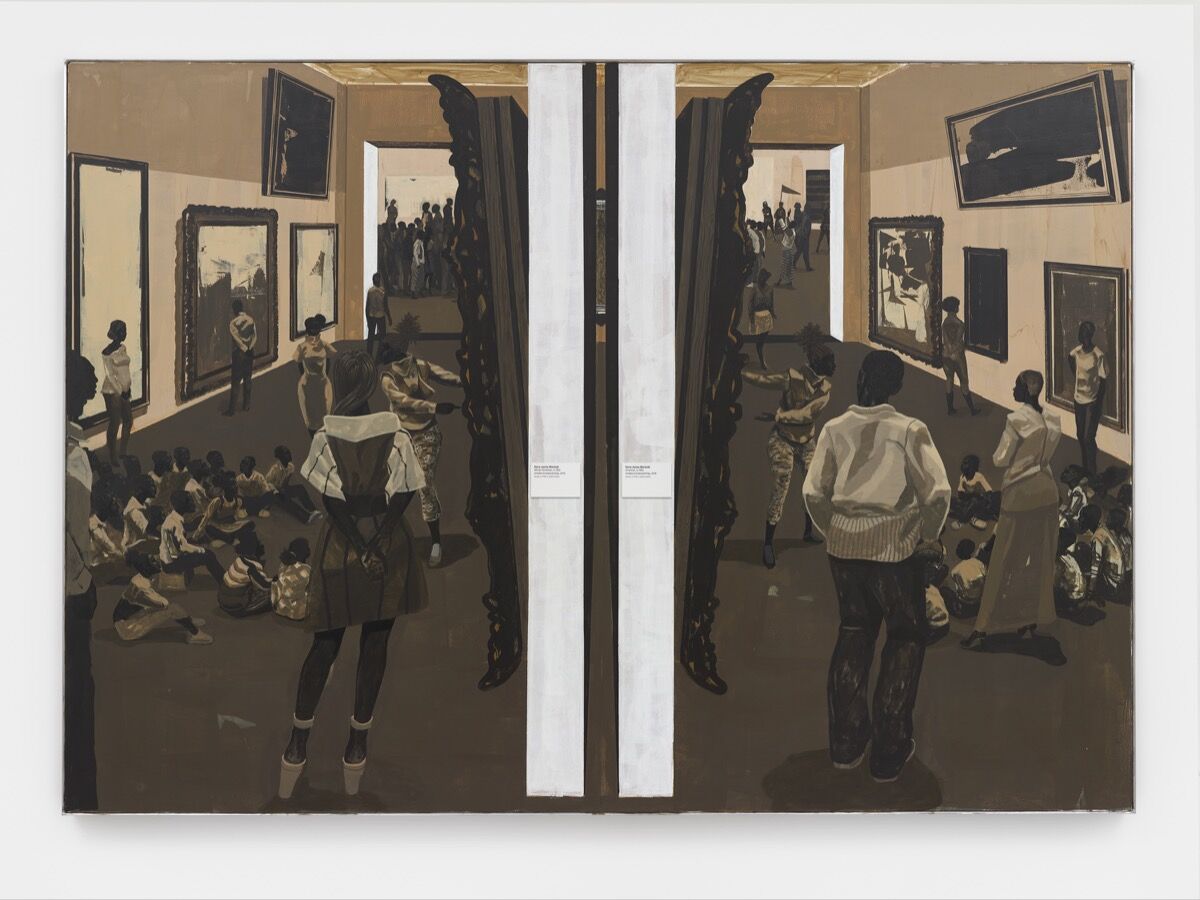 “Everything seems, to me, crystal clear,” said
Kerry James Marshall
, addressing a crowd at the preview of his latest exhibition, at David Zwirner in London. “There are no mysteries in the work I do. Everything is there. Everything is available….It’s all straightforward.”
That’s a typical understatement for an artist who is often and correctly lauded as one of our greatest living painters. And straightforward or not, the works on view here (all from 2018; all but one being shown for the first time) have a steady magic. They’re the sort of pictures that elicit that rare thing—earnest and sincere admiration of both his range of feeling and his technical chops. Marshall juggles his endearing humbleness with a well-deserved braggadocio. It’s something of a cliché for painters to present themselves as wrestling with the thousands upon thousands of years of art history that came before them, but in this case, it’s actually true. (The show’s swagger is summed up in its title: “Kerry James Marshall: History of Painting.”)
Most people know Marshall primarily as a figurative painter, a celebratory yet complicated chronicler of black life. Works in that vein are here: Untitled (Landscape) features a lone, camouflage-wearing figure, gazing at trees and a lake; Untitled (Dog Walker) depicts a woman and her pitbull, the dog’s leash a bright pink line that zips and zags across the composition. Untitled (Underpainting) presents a crowded museum. Groups of young black children sit on the floor, watching a docent explicate two unseen paintings—by Kerry James Marshall, according to wall labels that are collaged onto the actual surface of the work. 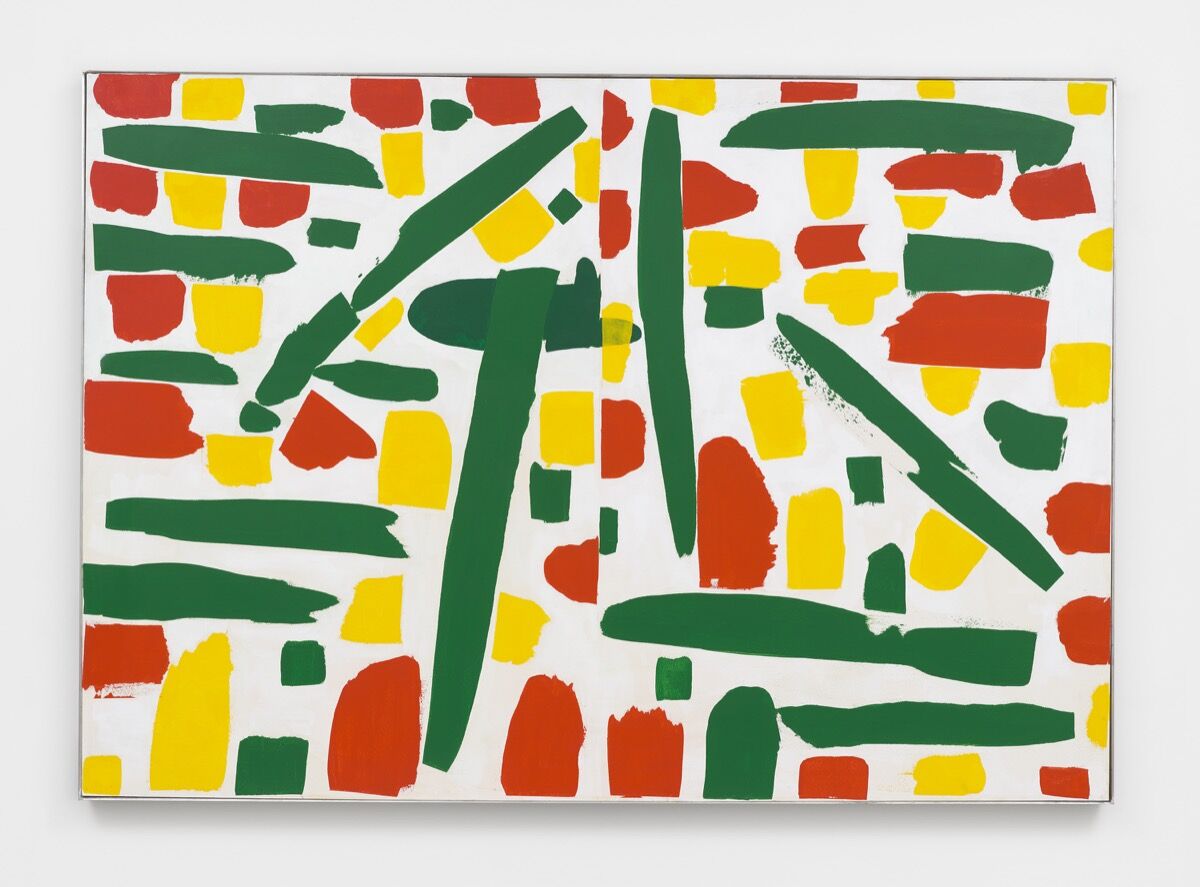 But perhaps the strangest works in this show are two abstractions—Untitled (Small Colours) and Untitled (Large Colours)—which resemble simple
Color Field
experiments, with bright rectangles and dashes of pigment resting on a white background. For Marshall, they represent an attempt to build a painting that checks off just enough boxes to be a painting at all. “The idea,” he said, “[is] that you can construct a picture like this, and that alone is satisfying enough to hold your interest for a reasonable amount of time.”
Marshall arrived in this abstract mode mostly by accident, while working towards another painting, Black Boy. For that piece, he laid down a similarly geometric assortment of colors and painted over it with wide, horizontal swaths of black. Then, he scratched into the top layer of pigment, creating a simple face composed of the letters of the word “boy,” harking back to a popular childhood game.
This small painting is hung across from an untitled work: a large-scale, voyeuristic depiction of a semi-nude woman seen through an apartment window while she’s getting dressed. The juxtaposition is jarring, but Marshall doesn’t think it should be. “These things are not incompatible with each other,” he explained. “I try and see if I can make work as a whole human being; all the things that are interesting to me are available as subjects.” 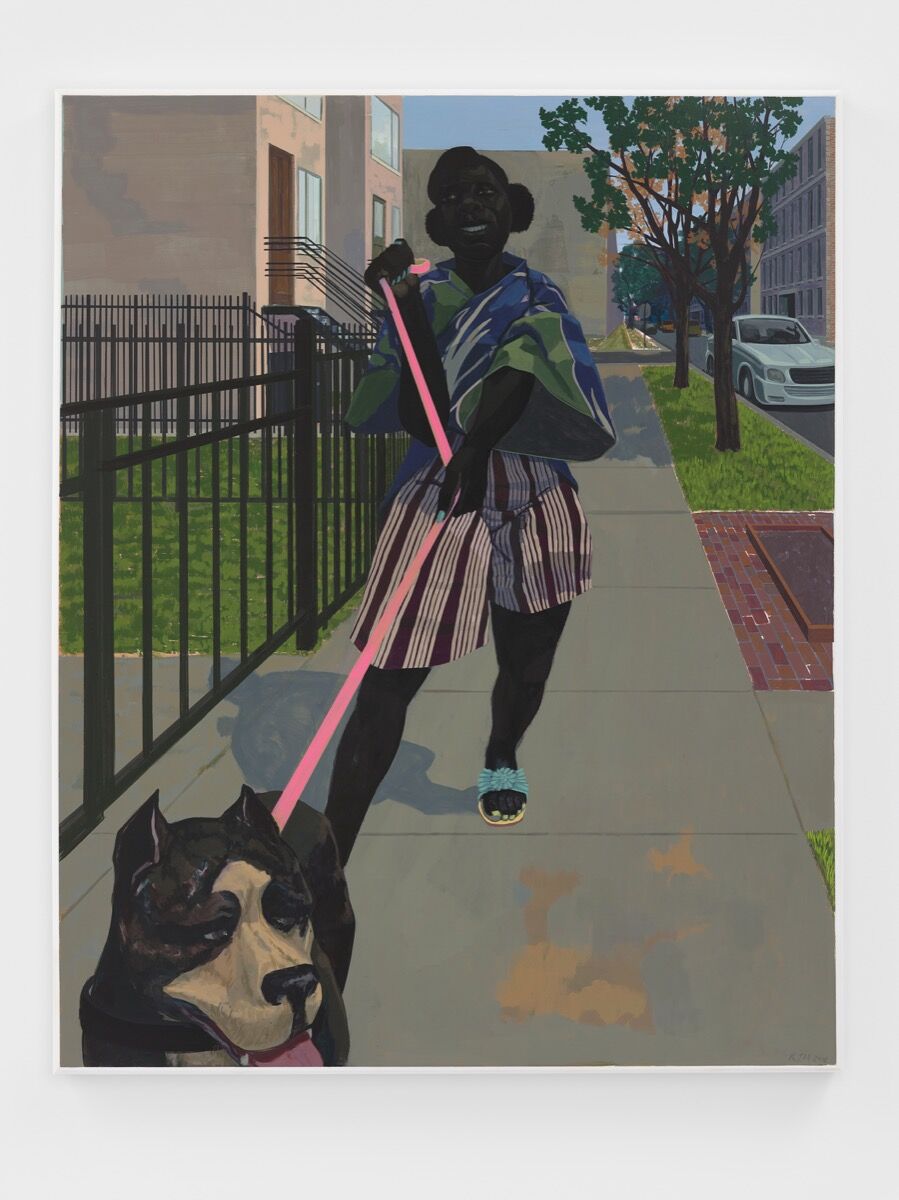 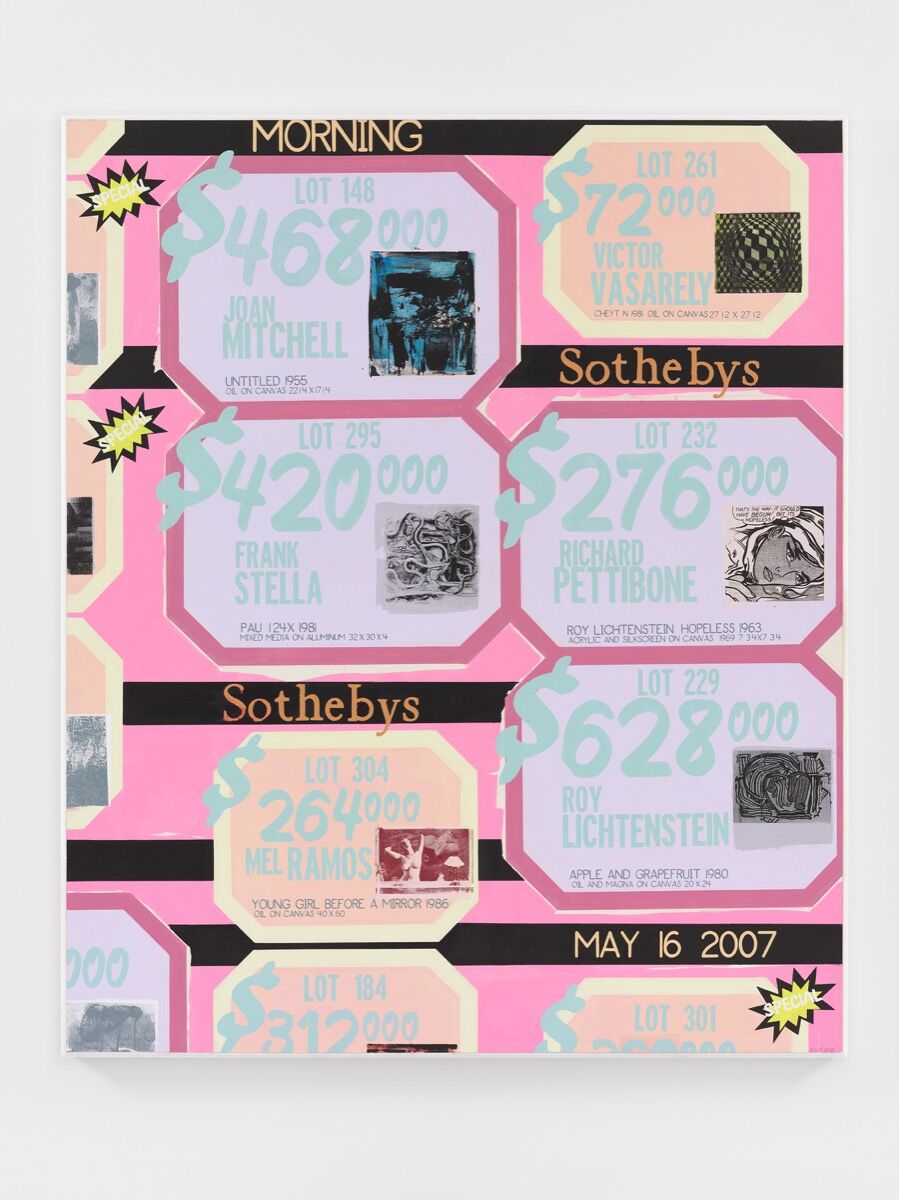 Advertisement
That includes the language of the art market and art auctions. A series of works here depict auction offerings from the likes of Christie’s and Sotheby’s, with coveted names—
Richard Prince
,
Robert Ryman
—listed like so many bananas or yogurts in a grocery store circular. Marshall referred to them as “my
Pop
paintings,” before elaborating: “They are like
Warhol
, but they are more than Warhol.” The most interesting of the group features miniature reproductions of works for sale specifically by black artists, from
Faith Ringgold
to
Sam Gilliam
(the price points are conspicuously lower).
Marshall said that he finds the paintings beautiful in compositional terms—“It’s not just commentary on the commodification of art”—though this all gets nicely complicated when imagining the prospective buyer of any of these works. (The artist’s current auction record is $21.1 million, and his Knowledge and Wonder, 1995, is headed to Christie’s with an estimate of $10–15 million, money that will benefit the Chicago Public Library system.) “[These paintings] are simply an acknowledgment of the market,” he said, “and they are history paintings, like other things I’ve done. They are a moment in time: a day and a place and an event.”
A lesser talent, given this much room to wander, could make a real mess. But ultimately, “Kerry James Marshall: History of Painting”—which has been consciously positioned as a buzzy return-to-form following the artist’s touring U.S. retrospective, “Mastry”—more than makes good on its promise. “The structure of my practice as an artist makes me feel like I’m completely free,” he said during the preview. “I’m totally free. I’m not restrained by anything or anybody—I don’t have a lack of knowledge, a lack of ability, to do any of the things that I want to do.” This is genius in action, which can look effortless; Marshall’s freedom is a beautiful thing to witness.
Scott Indrisek
Related Stories

17 Shows You Need to See during Frieze Week in London 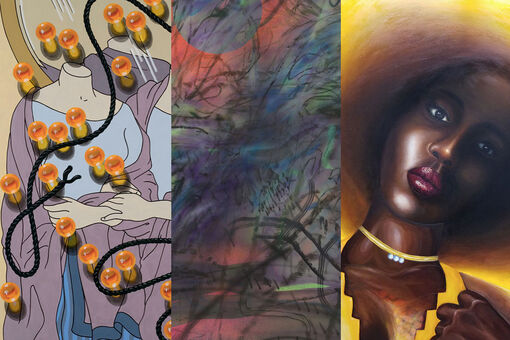 17 Shows You Need to See during Frieze Week in London
Scott Indrisek
Oct 1, 2018 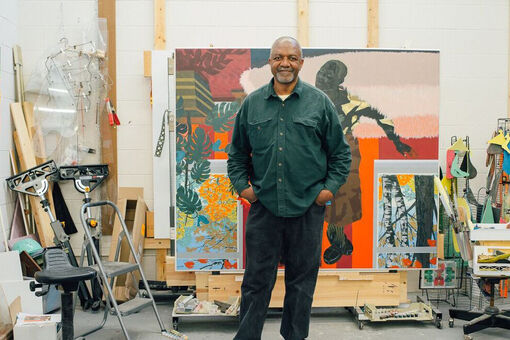