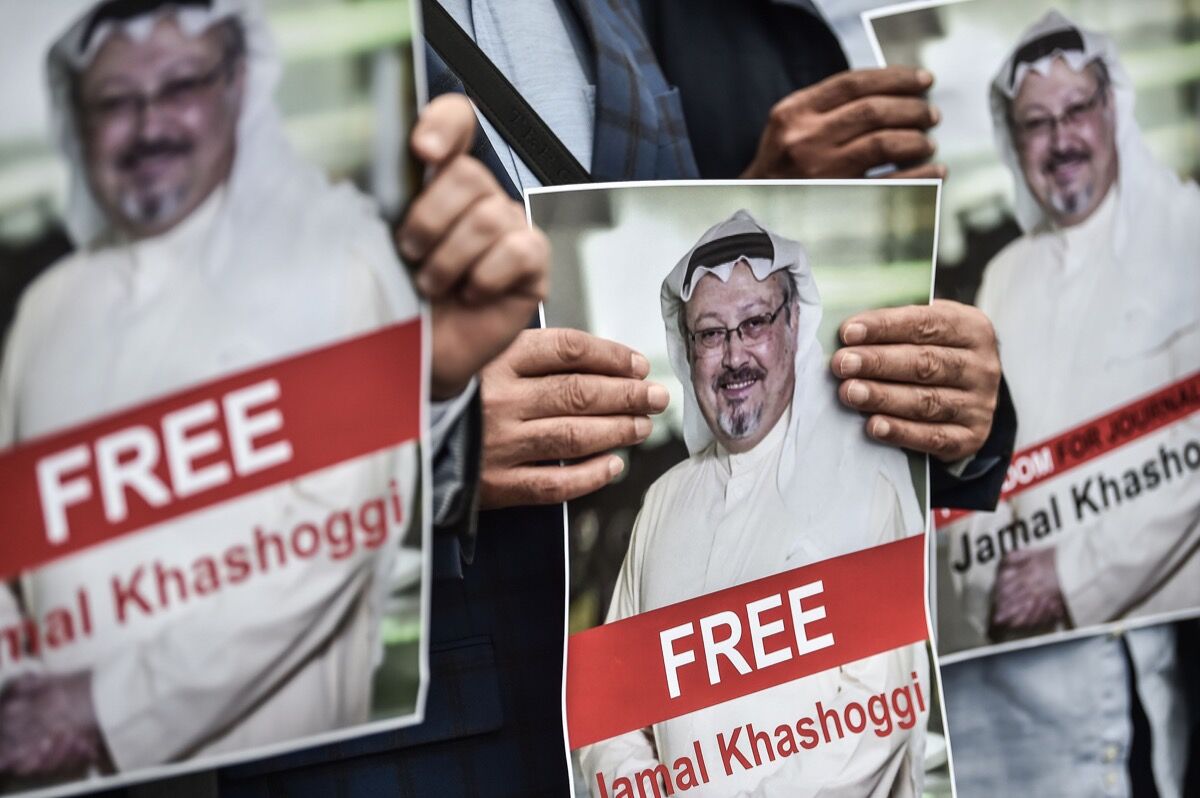 Protestors hold pictures of missing journalist Jamal Khashoggi during a demonstration in front of the Saudi Arabian consulate. Photo by OZAN KOSE/AFP/Getty Images.

Allegations that the government of Saudi Arabia played a role in the suspected murder of Washington Post journalist Jamal Khashoggi have roiled the international community since his disappearance from the Saudi consulate in Istanbul on October 2nd. The fallout has had a direct impact on the arts sector, where Saudi Crown Prince Mohammed bin Salman bin Abdulaziz Al Saud (MBS for short) has become a major force in recent years.
Days before Treasury Secretary Steven Mnuchin followed suit, Sotheby’s CEO Tad Smith pulled out of an economic conference chaired and hosted by MBS. The second edition of the Future Investment Initiative, often described as “Davos in the Desert,” is due to kick off on October 23rd in Riyadh, despite many high-profile attendees dropping out. A spokesperson for Sotheby’s confirmed that Smith had decided not to participate, but declined to comment further.
Cultural initiatives tied to the Saudi government and MBS, especially those linked to the MiSK Foundation and Misk Art Institute (nonprofits founded by the crown prince) and Edge of Arabia, an organization founded in 2003 by Saudi artists
Ahmed Mater
and
Abdulnasser Gharem
and British artist Stephen Stapleton, have come under increased scrutiny since Khashoggi’s disappearance, as have the cultural activities of Saudi Aramco, the country’s national oil and gas company. And while some museums and organizations are forging ahead with their Saudi partnerships until the results of an investigation into Khashoggi’s disappearance are made public, others have already begun cutting ties with the embattled kingdom.
The current crisis coincided with the launch of the Arab Art & Education Initiative, a three-month series of programs including panels, a talk by Mater at Columbia University, a seminar at the Metropolitan Museum of Art, and an exhibition at the Brooklyn Museum organized in part by Edge of Arabia. Already, one of the initiative’s co-organizers, the Washington, D.C., think tank the Middle East Institute, has pulled out of the initiative.
“The Board of Governors of the Middle East Institute expresses its shock and outrage at the disappearance and possible murder of Saudi journalist Jamal Khashoggi,” reads a statement provided by a spokesperson for the Middle East Institute. “Khashoggi was a friend of the Institute and a frequent participant in its public panels and conferences.”
On Thursday, the Metropolitan Museum decided not to accept Saudi funds in support of next week’s seminar, “Collecting and Exhibiting the Middle East,” and the Brooklyn Museum similarly renounced Saudi funding for its exhibition “Syria, Then and Now: Stories from Refugees a Century Apart.” Columbia University canceled Mater’s planned talk planned for October 22nd. Other institutions with tangential ties to Saudi money are also distancing themselves.
“Moving forward and joining with others in reaction to Khashoggi’s apparent murder, the Newseum will no longer rent space to nor accept donations from the Saudi Arabian government,” said Jonathan Thompson, the vice president of marketing and public relations at the Newseum, the Washington, D.C., institution devoted to emphasizing the importance of the First Amendment and a free press.
The Misk Art Institute rented space at the Newseum in March of this year for a panel on the changing appearance of Saudi Arabian cities and landscapes. As of this writing, the Newseum is listed as a collaborator on the Misk Art Institute’s website. “To be clear, we have no official or unofficial partnership with them,” Thompson added. “We’ve since asked to be removed from that list.”
Another organization listed as a partner of the Misk Art Institute, auction house Phillips, said it is keeping a close eye on the developing crisis. “We are monitoring the current situation as we evaluate whether to continue our relationship with the MiSK Foundation, a non-profit organization devoted to cultivating learning and leadership for Saudi Arabia’s youth,” the auction house’s chief communication officer, Michael Sherman, said.
Meanwhile, a weekend-long event at the Smithsonian’s Freer|Sackler galleries in Washington, D.C., to which Saudi Aramco has given $175,000, is going ahead as planned. According to the Washington Post, the Saudi energy giant has contributed a total of $2.8 million to the Smithsonian Institution since 2013.
Khashoggi’s disappearance and alleged murder come in the midst of a global push on the part of the Saudi government to change the country’s image and attract investment, efforts that have already been severely undermined by the scandal.
While carrying out widespread crackdowns on dissidents—especially women’s rights activists—and a devastating military campaign and blockade in Yemen that has created what the United Nations has described as the world’s worst humanitarian crisis, MBS has promoted an image of himself as a reformer bent on rooting out corruption, diversifying the kingdom’s oil-centric economy, and modernizing its society. Those attempts at modernization have included intensifying the country’s cultural activities abroad. Earlier this year, MBS’s MiSK Foundation unveiled plans to create an ambitious new art center in Paris. The crown prince was also reportedly behind the record-setting, $450 million purchase of
Leonardo da Vinci
’s Salvator Mundi at Christie’s last year, though the Saudi government disputes his involvement.
Christie’s declined to comment on the allegations currently facing MBS and the Saudi government, and a number of cultural organizations with ties to Saudi-funded nonprofits—including the Louvre and the Institut du Monde Arabe in Paris, and the Art Dubai fair—did not respond to requests for comment.
Benjamin Sutton is Artsy’s Lead Editor, Art Market and News.

Update: After this article was published, a representative of the Venice Biennale responded to Artsy’s query. Their statement does not address the specific allegations against the Saudi government and the plans for Saudi Arabia’s participation in next year’s Biennale, and concludes: “we believe that our primary duty as a leading cultural institution is to protect freedom of expression for all.”