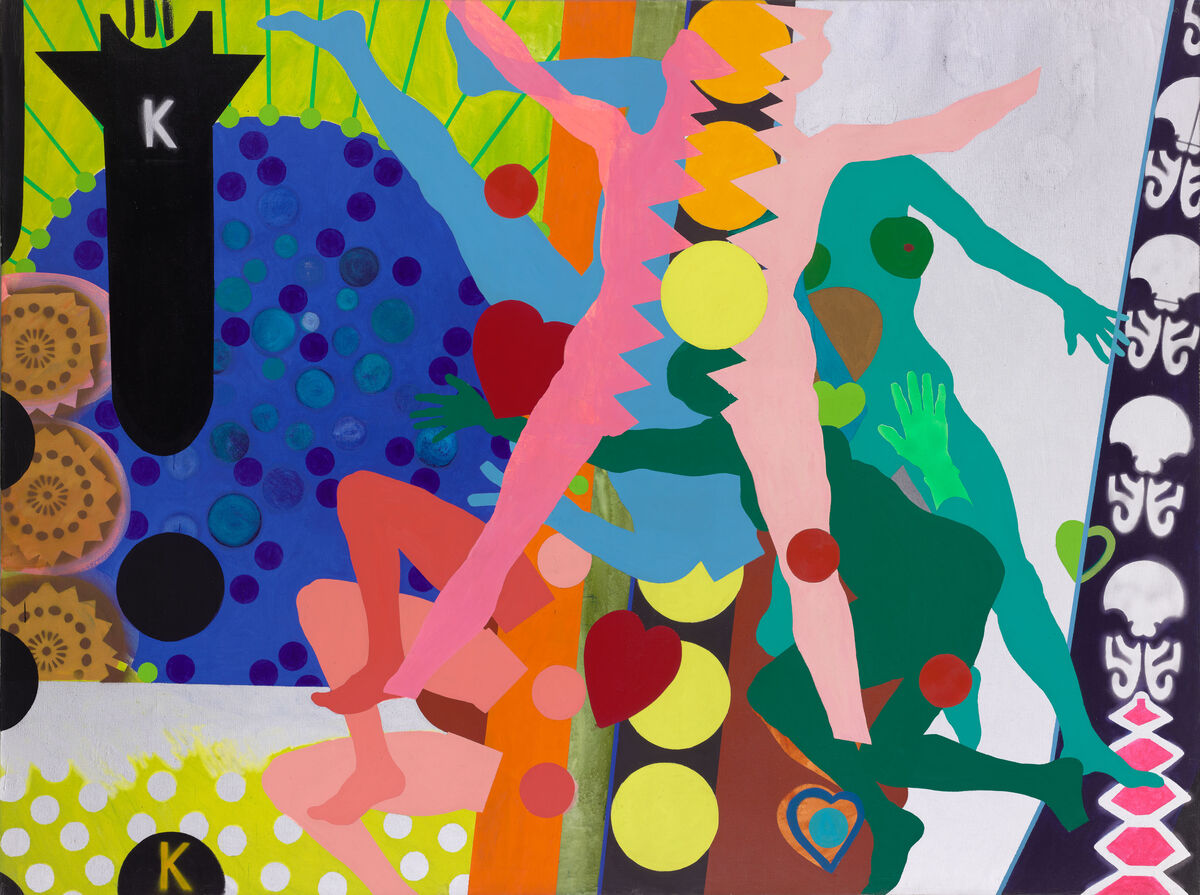 Like other mid-century
Pop artists
,
Kiki Kogelnik
became a brand. And while the Austrian-born artist should primarily be remembered for her innovative “Hangings” series and her bold feminist motifs, history hasn’t been kind to her. In the United States, Kogelnik’s legacy unfairly rests more on her fashionable image and vibrant personality than on her work itself.
Born in Bleiburg, Austria, in 1935, Kogelnik attended Vienna’s Academy of Fine Arts and began her career painting quiet abstractions. She moved to New York in 1961 at the suggestion of her friend, painter
Sam Francis
, and her work took a colorful turn. Influenced by the city’s commercialism and the burgeoning Pop movement, Kogelnik made science fiction-inflected paintings featuring floating bodies, polka dots, robot parts, and the cosmos. She worked out of Francis’s studio for a few years, mingling with the other artists who came through and easily integrated into the city’s cultural milieu. Her friends included major figures, from
Andy Warhol
to
Larry Rivers
.
According to a pamphlet she preserved in a giant black scrapbook of personal ephemera (which she titled her “Ego Book”), composer Morton Feldman once said, “Kiki is the love goddess of pop art…her paintings continue the legacy of a ‘Marilyn Monroe.’” If Kogelnik relished the praise, it didn’t help her reputation as a serious artist. “She was kind of an outlier, even though she knew everyone,” Pilar Zevallos, the director of the Kiki Kogelnik Foundation, tells Artsy. 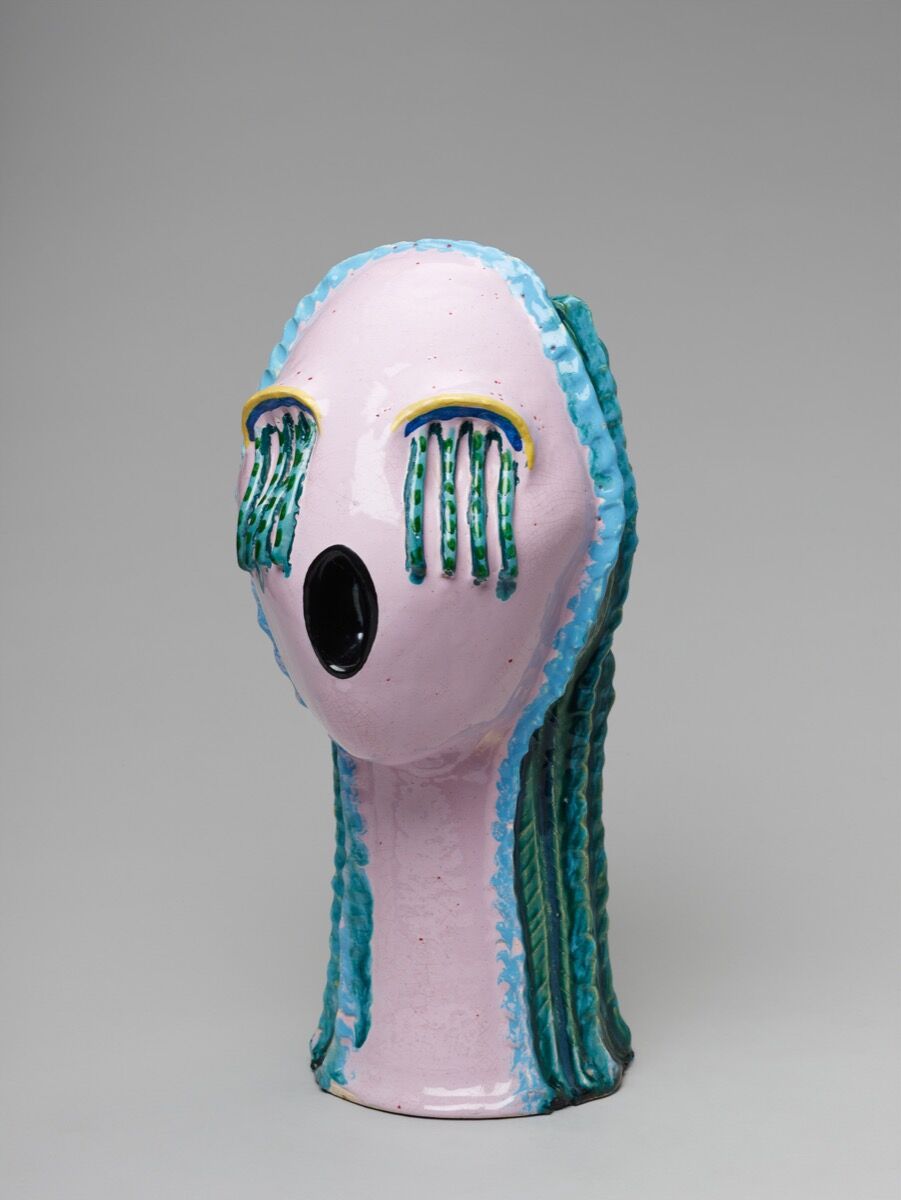 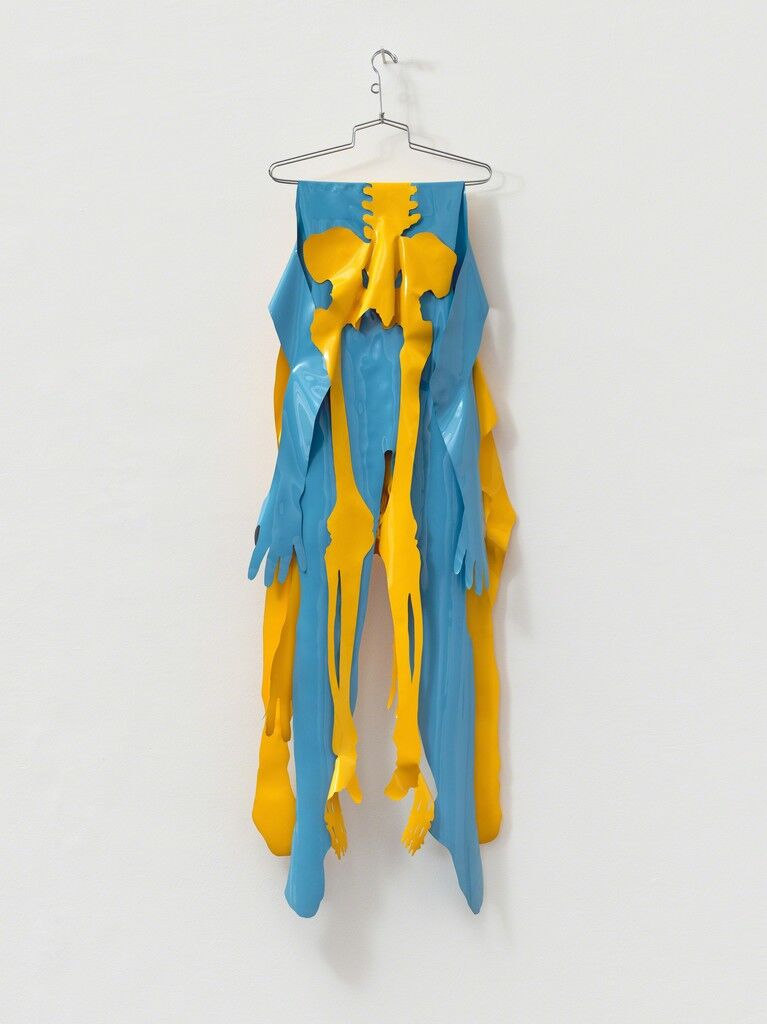 Kiki Kogelnik
Untitled (Hanging), ca. 1970
Simone Subal
News articles similarly portrayed her as a well-dressed muse or woman about town. As the lede for a September 1965 Women’s Wear Daily article about one of her gallery shows began, “Kiki Kogelnik came into the Fischbach Gallery in her Jacques Kaplan black broadtail dress and jockey cap.” Kogelnik tells the writer, Carol Bjorkman, that she’s painted a heart-shaped beauty mark on her face because she’s a painter.
Kogelnik, like Warhol before her, was a multidisciplinary artist attempting to merge art with persona. Yet Kogelnik wound up in the society pages, while her work never entered the annals of American art history. “It was really hard for a female artist to create a name, and the fact that she was fluid in her practice and also did performances did not help,” gallerist Simone Subal told Artsy. “She really resists categorization.”
Subal is attempting to raise Kogelnik’s profile through a series of shows devoted to the artist. “We are deliberately trying to focus on the work that has been forgotten and that has not been visible for such a long time,” she says. Subal herself is from Austria, where Kogelnik’s name enjoys some celebrity. Yet even the gallerist was at first hesitant to champion her fellow countrywoman. 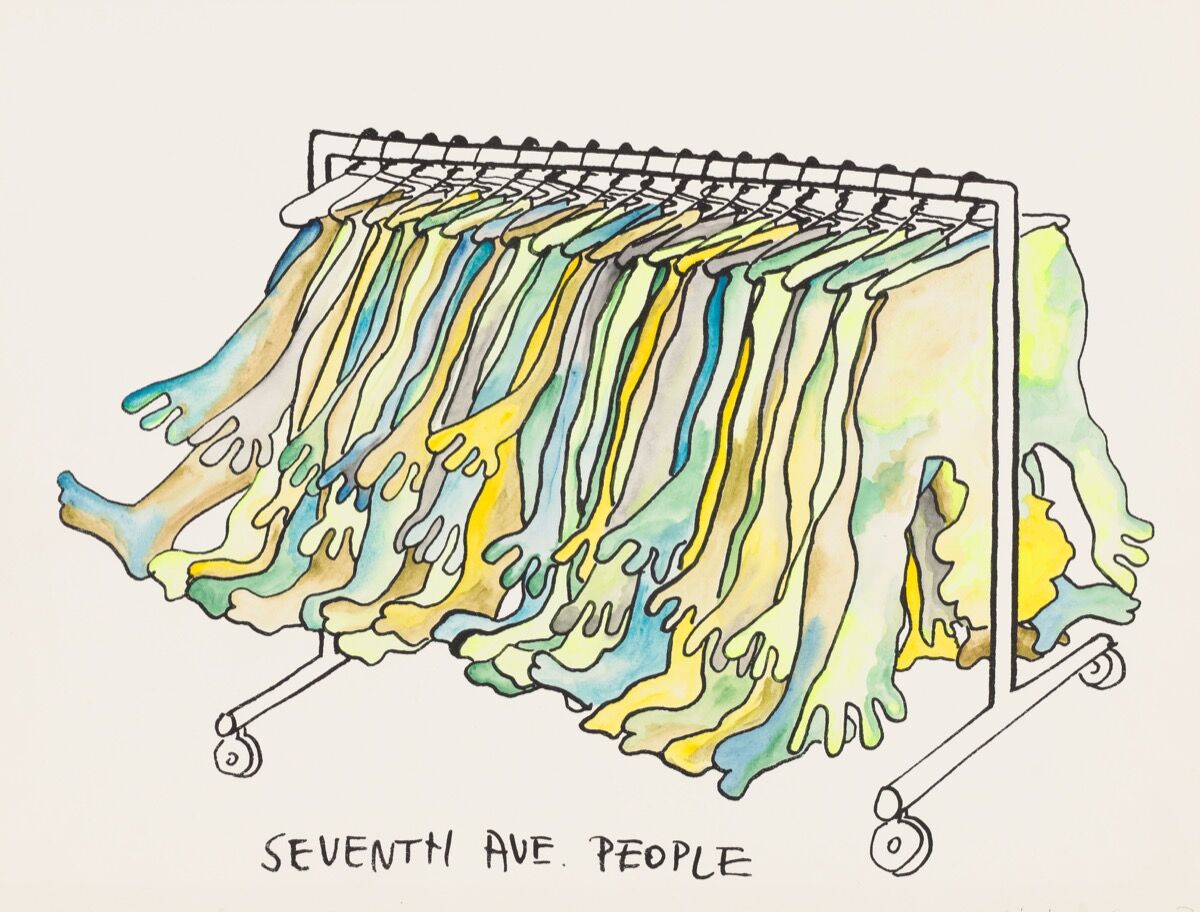 Advertisement
Subal initially knew Kogelnik only for her Murano glass head sculptures, which the artist made from 1994 until her untimely death in 1997, due to cancer. Not a fan of the medium, Subal wasn’t impressed by the work. She now understands these final pieces as part of a larger, four-decade-long story.
In 2012, the gallerist mounted “Early Works, 1964-1970,” reintroducing New York to the artist (her profile is higher in Europe, where her work was featured in the Tate Modern’s 2015 exhibition “The World Goes Pop” and several recent shows throughout Austria). During the six years that Subal’s show focused on, Kogelnik turned to consumer materials (acrylic, polyurethane foam) and flashy hues rather than relying on gesture or philosophical perspectives on painting. She depicted colorful, fragmented bodies (many of them female), often hovering as though immune to gravity. Indeed, she was fascinated by the Space Race and the idea of extraterrestrial travel. In a representative work from the period, Outer Space (1964), a pink body floats beneath a blue body. Two polka dot oranges cover the pelvis of the former. Silver, yellow, brown, and blue dots behind the figures place the viewer among the stars, while the bodies’ hues suggest a nascent interest in gender stereotypes.
Naturally, Kogelnik celebrated the first moon landing. Her 1969 performance Moonhappening occurred at Vienna’s Galerie Nächst St. Stephan alongside a television broadcast of the event. As Neil Armstrong and his Apollo 11 crew took their first steps on the moon, Kogelnik created a series of silkscreens recording the astronauts’ words. In the 1960s, she also began turning real army surplus bombs into brightly painted sculptures. Initiated just before Dr. Strangelove came out, they suggested a similar, ironic message: Stop worrying and love the bomb. 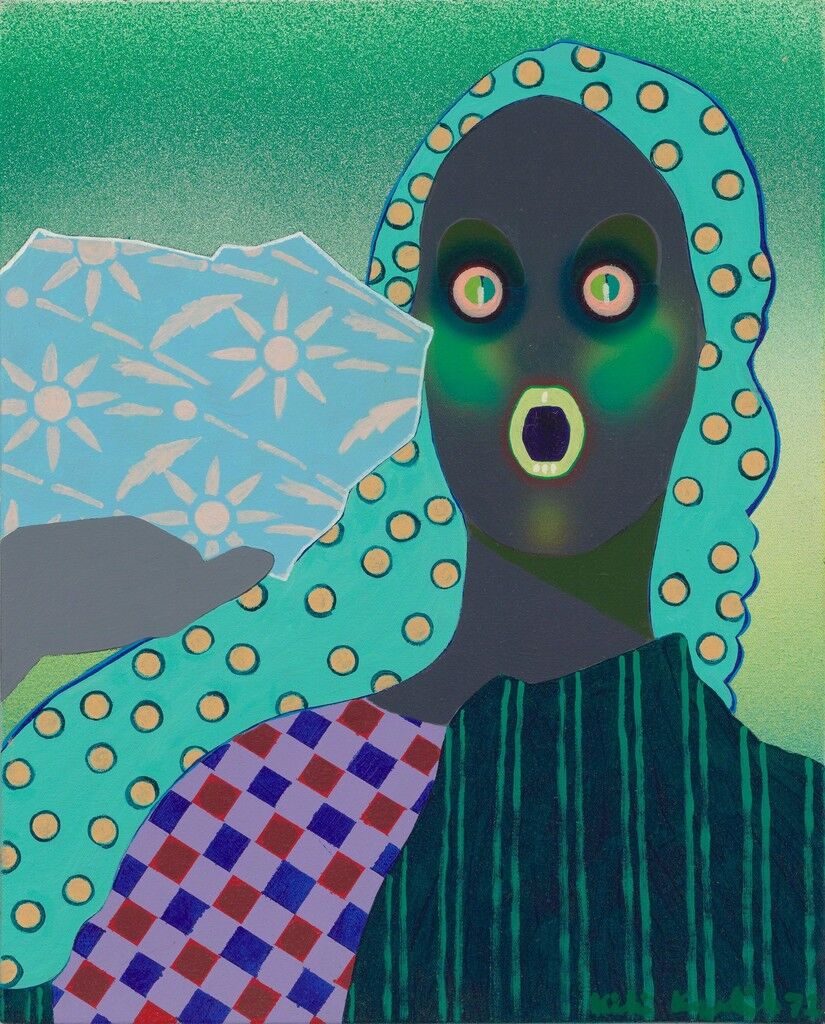 Kiki Kogelnik
Express, 1972
Simone Subal
It was also during the ‘60s that Kogelnik began her best-known series, “Hangings.” She created plastic cutouts of life-sized, human figures; in hues ranging from teal to chartreuse to fire engine red, they resemble unnatural, shiny skins. Kogelnik draped the cutouts on hangers, mounting them together on a rack. Bent at their midpoints, their hands lifelessly dangle toward the ground. Kogelnik treated the ghostly forms like pieces of clothing in a department store. In an essay accompanying a 1996–97 exhibition at Vienna’s MAK-Galerie, Jo Anna Isaak wrote, “Death, in the form of colorful skeletons…is treated like a comic monster, a Mardi Gras dummy to be paraded about the market-place by the laughing crowd.”
At other times, Kogelnik’s interest in the body was nearly clinical, incorporating anatomical imagery: pictures of individual bones, or the diagram of a penis. (She was married to a radiation oncologist named George Schwarz, and her art merges aesthetic concerns with medical and scientific knowledge.)
Throughout the 1970s and ‘80s, Kogelnik challenged restrictive conceptions of gender through fragmented ceramics, boldly hued paintings, and multimedia ranging from glitter to silkscreen. Reluctant to associate herself with the feminist movement, though, the artist worked out her political ideas within the confines of her studio. 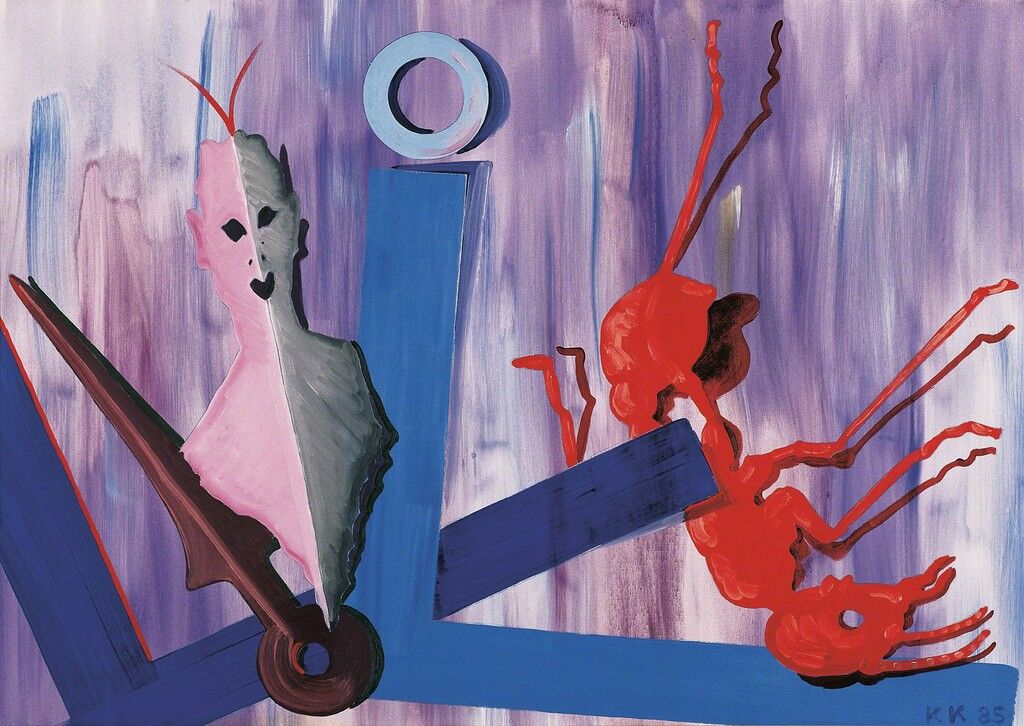 Kiki Kogelnik
Red Ant, 1985
Galerie Bei Der Albertina Zetter
Subal is spotlighting this era in her current gallery show, “Fragments and Masks: Works from the 70s and 80s.” Depictions of scissors often appear throughout the exhibition, a tool associated with fashion (Kogelnik made some of her own dresses) that also contains hints of violence. Subal likes to interpret the symbol through the lens of yet another Austrian, Sigmund Freud. In Kogelnik’s work, she finds ideas about castration anxiety. More than that, Subal says, the artist “is creating her own vocabulary, her own narrative, her own language.”
In the 1980 work Untitled (Still Life), now on view at the gallery, brown paper cutouts (of heads, hands, an iron, scissors, and other tools) swim across a pink backdrop. Pink pliers appear above a torso, while a blue thread weaves through the loop of scissors, in and out of an eye socket. The domestic tools look almost threatening, elements capable of both destruction and creation. In the nearby Untitled (Face) from 1976, yellow thread weaves through the eyes and mouth of a ghoulish, light pink head, as though to blind the figure and keep it from speaking.
Even if Kogelnik was outwardly quiet about her own beliefs, Zevallos says that in the show, “you can see that she’s making a comment on the objectification of women.” In the 1990s, just before her untimely death, she started making Murano glass heads that fell somewhere between design and art. These, combined with her public image as a socialite, led to her own ironic fate: objectification by the art world itself.
Alina Cohen
Related Stories