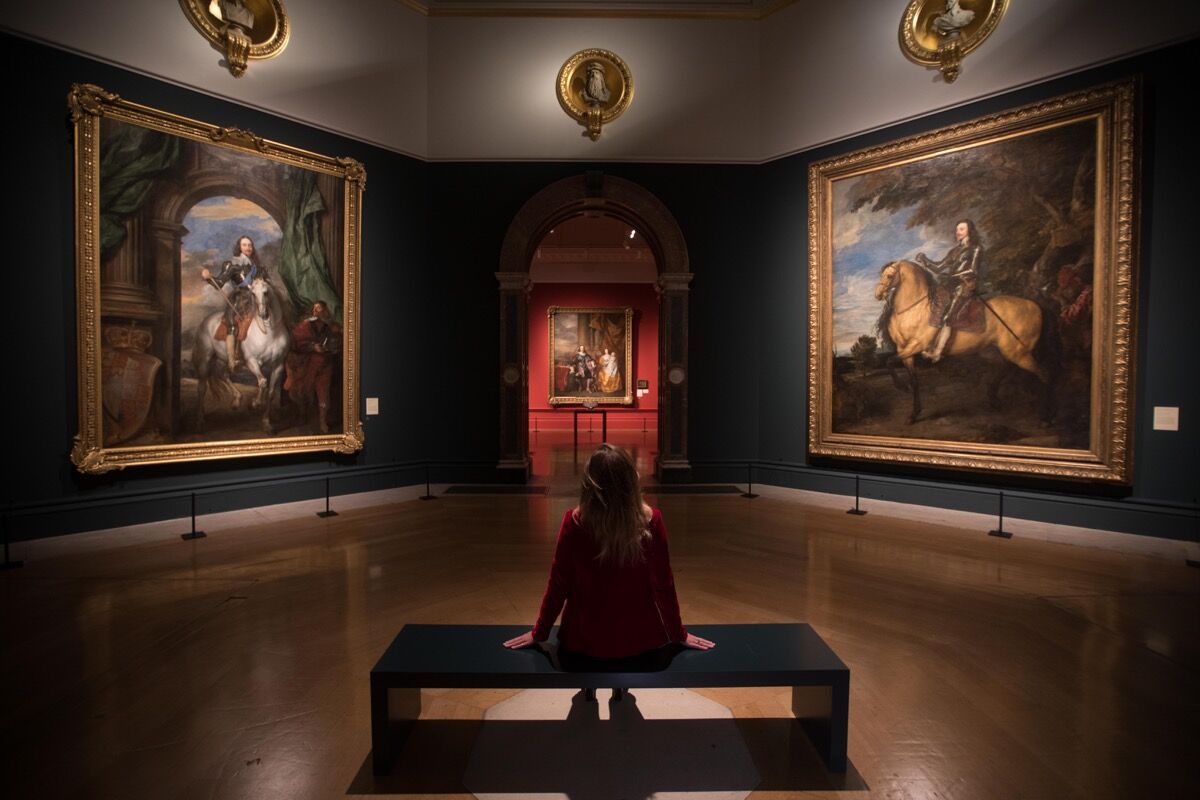 One bitterly cold Tuesday in 1649, a middle-aged English king walked through the banquet hall at Whitehall Palace, his residence in Westminster, London. The room was lavishly decorated, with Ionic columns jutting from the walls and a group of nine glistening paintings by
Peter Paul Rubens
—commissioned by the king two decades prior—adorning the ceiling.
These opulent surroundings belied the king’s grim destination, however. On that January day, Charles I of England was walking to his execution.
Indeed, only moments before being beheaded for treason, the disgraced king was confronted with a reminder of his previous splendor: his massive, extravagant, and boundary-pushing royal art collection. Looking beyond the island he ruled and towards Continental Europe, Charles I acquired thousands of paintings by such artists as Rubens,
Titian
,
Raphael
, and
Anthony van Dyck
—as well as an impressive selection of tapestries, miniatures, and classical sculptures—over a quarter-century.
Charles I introduced his nation to the works of foreign masters and their contemporaries, profoundly altering how the English would appreciate art. Today, this historic collection forms the focus of “Charles I: King and Collector,” a unique exhibition on view at the Royal Academy of Arts. The show reunites more than 100 works previously owned by the king (many of which now belong to institutions like the Louvre and the Museo Nacional del Prado) for the first time since the 17th century. 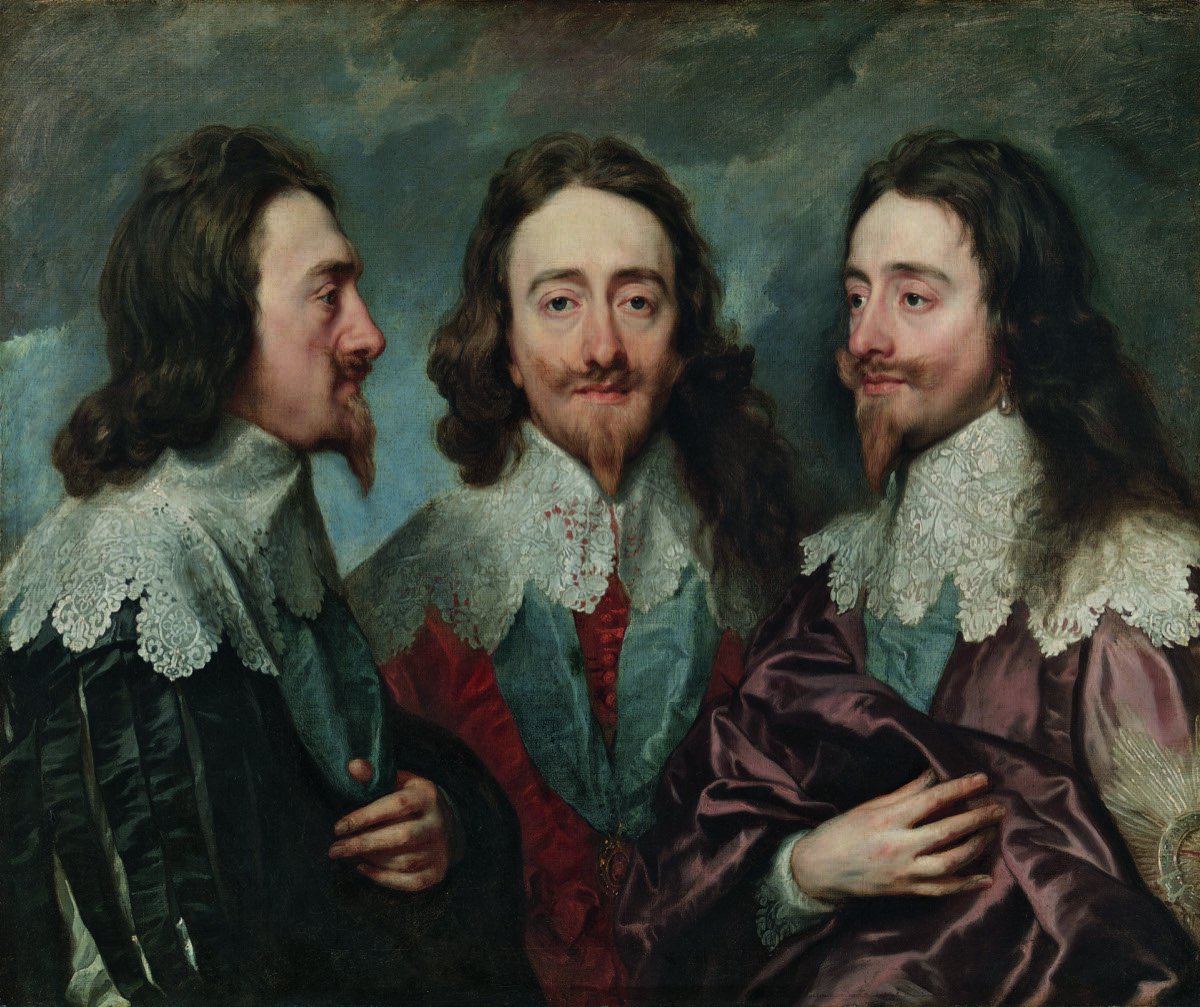 Born into the House of Stuart in 1600, Charles was only 12 years old when he became heir to the throne. Both his brother and his father, King James I of England, instilled young Charles with a love for the arts. But it was a foreign trip taken by the 22-year-old prince that truly “opened his eyes to the splendors of collecting,” Lucy Chiswell, an assistant curator of the Royal Academy exhibition, told Artsy.
When Charles arrived in Madrid in March 1623 to seek an arranged marriage with the Infanta Maria Anna (the younger sister of King Philip IV of Spain), he toured the magnificent Spanish Habsburg court. He witnessed its extensive collection of paintings by Titian, who served as the family’s court painter in the 16th century. Although religious differences—Charles was Protestant; Maria Anna, Catholic—dampened the potential relationship, Charles didn’t return to England disappointed.
Instead, he became enamored with Titian, the provocative Venetian artist whose association with Spanish royalty and international prestige—along with his erotic portrayals of mythological and everyday subjects—helped elevate him to the top of collectors’ wishlists. After his introduction to Titian’s work, Charles made one of the first purchases for his collection while at a Madrid market: the artist’s subtly sexual portrait Woman with a Fur Coat (1535).
Italian art was rare, if not totally absent, in the previous Tudor court, which had ruled England from the Late Middle Ages until the Stuarts rose to power. Spying an opportunity to revolutionize English court culture, Prince Charles went on to acquire a few more works by Titian over the course of his eight months in Spain, as well as some by his Venetian rival,
Paolo Veronese
, and the French-born, Florence-based sculptor
Giambologna
. The latter’s Samson Slaying a Philistine (1560–62), gifted to Charles by the Spanish king, is violent and sexually charged—themes traditionally avoided by the demure English court. 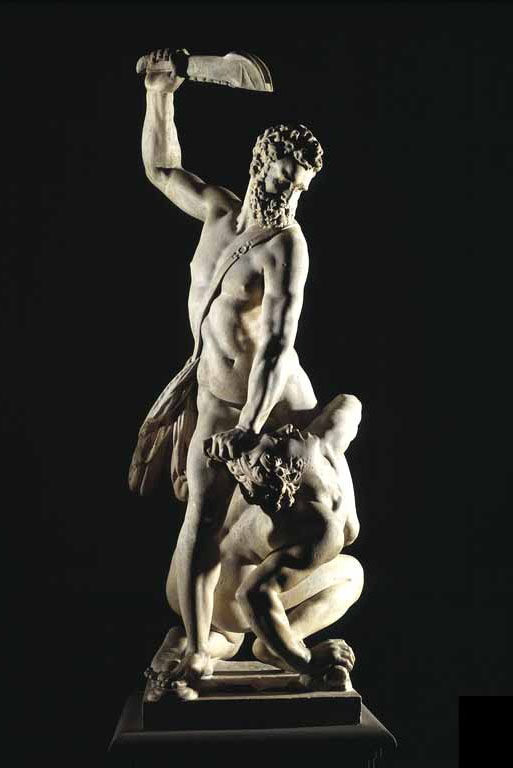 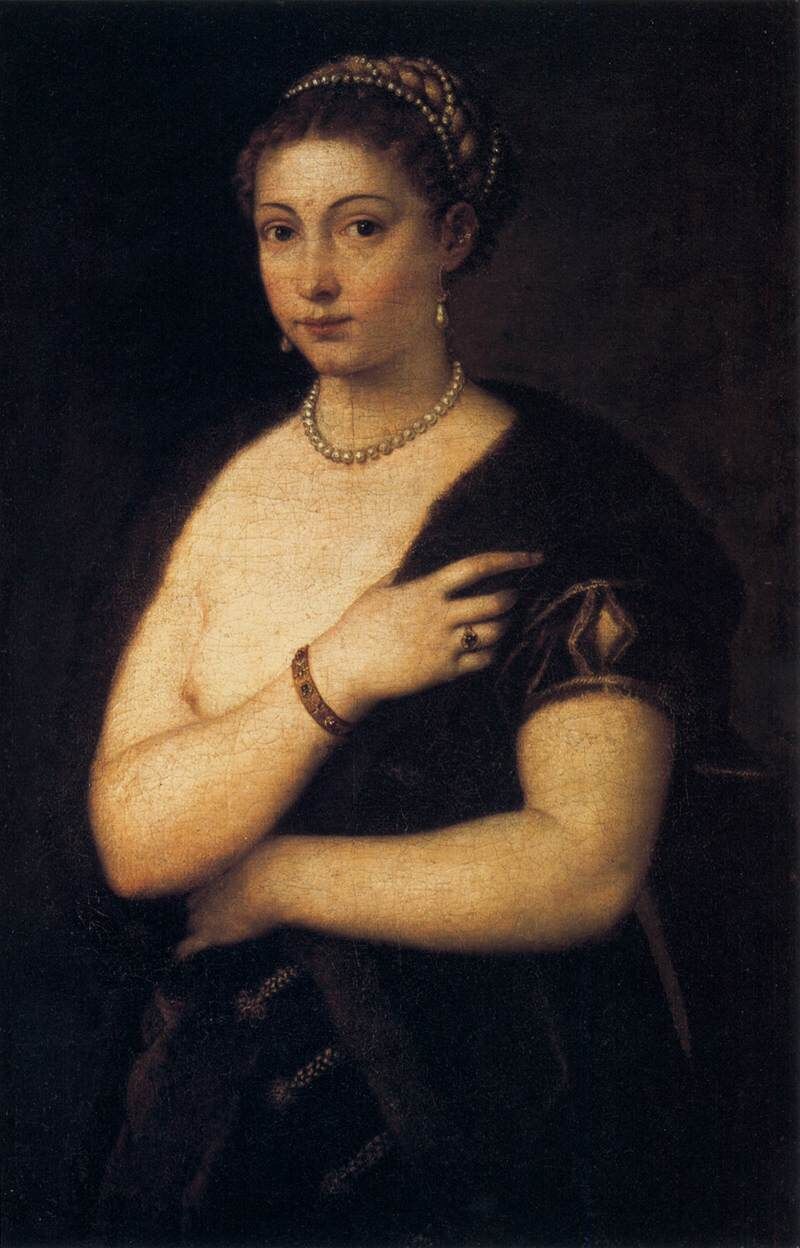 Titian, Woman with a Fur Coat, 1535. Photo via Wikimedia Commons.

Advertisement
The prince returned to London not only with a “taste for [the] erotic,” but also an awareness of how “possessing a large and prestigious art collection [could] convey his own dynasty’s power and authority,” writes art historian Guido Rebecchini in the exhibition catalogue.
In 1625, the year he became king, the newly minted Charles I began to poach works from another royal collection in Mantua, Italy. The collection had belonged to the Dukes of Mantua for six generations and was widely viewed as one of the most esteemed in Europe, featuring thousands of masterpieces by Italian and Flemish artists. Rather than travelling to see the art for himself, Charles I entrusted a Venice-based broker named Daniel Nijs (as well as his own court musician) to choose works on his behalf—it seemed that, upon taking the throne, Charles wanted to amass as extravagant an art collection as possible as quickly as possible.
Within a few years, the king’s collector-proxies obtained some of the greatest works in Mantua, including allegorical paintings by
Correggio
and a group of ancient Roman sculptures. All the while, Nijs kept his eye on the collection’s ultimate masterpiece: a series of nine paintings by Italian Renaissance master
Andrea Mantegna
, titled the “Triumph of Caesar” (ca. 1485–1506). A vision of the Roman emperor’s rise rendered through Mantegna’s crisp, colorful brushwork, the series was a prized possession. The Dukes of Mantua were not letting it go. 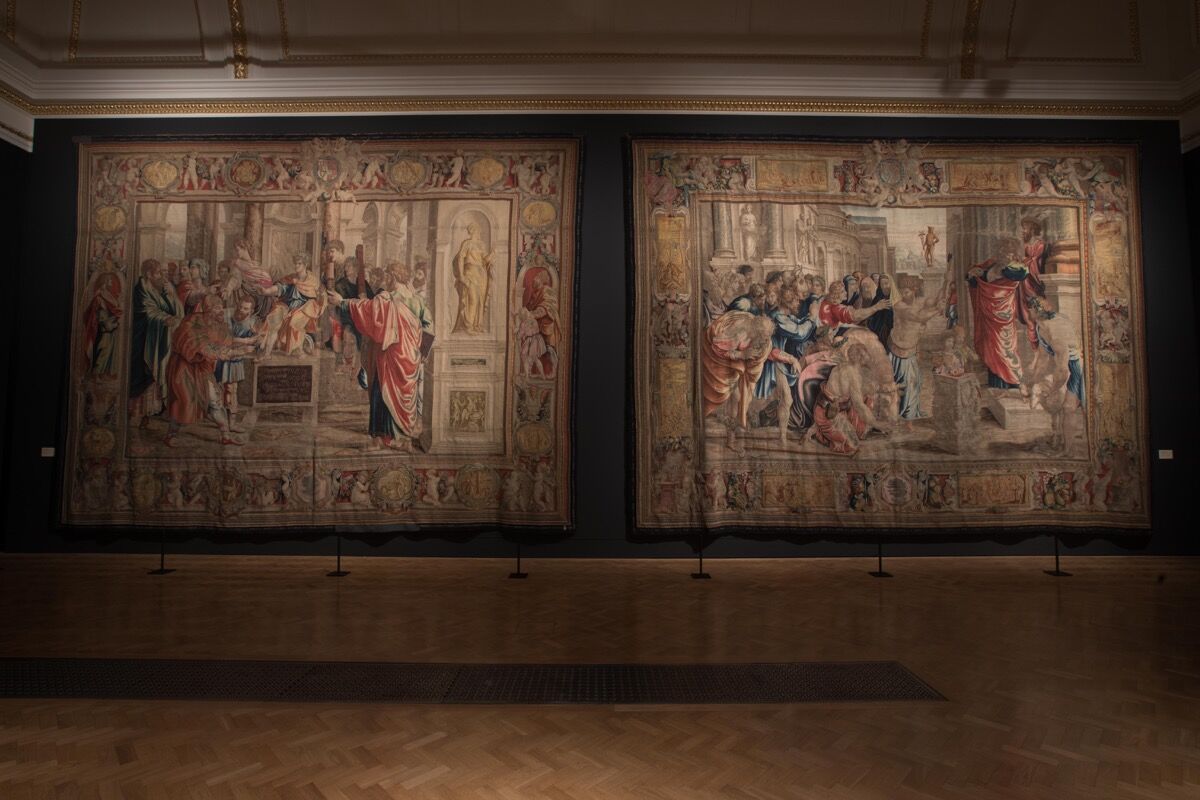 At least, not until the end of the decade. Finding themselves in need of funds, the dukes sold their precious Mantegnas to Nijs, who paid up to £18,000 (roughly $25,000) for them in cash—a significant sum at the time. However, due to high demand, the broker wasn’t able to get Charles I to approve the hefty purchase in advance. Instead, he wrote a letter to the king, assuring him that Mantegna’s “Triumph” paintings were so “rare and unique,” no other work of art in his collection would again compare.
Even beyond his Mantegnas and Titians, Charles I also had pieces by the ultimate masters of the
High Renaissance
. Raphael’s St. George and the Dragon (ca. 1506) graced his Cabinet Room, as did
Leonardo da Vinci
’s St. John the Baptist (1513–16); he had to trade works by Titian and
Hans Holbein the Younger
to get each of them. Additionally, records show that the collection may have included Leonardo’s Salvator Mundi (ca. 1500) for some time.
Although Charles I had an indelible taste for Italian masters, by the time the Mantegna series was installed in his Hampton Court Palace, he had also begun acquiring art from Northern Europe in earnest. That same year, he appointed the Antwerp-based artist Anthony van Dyck as his court painter. 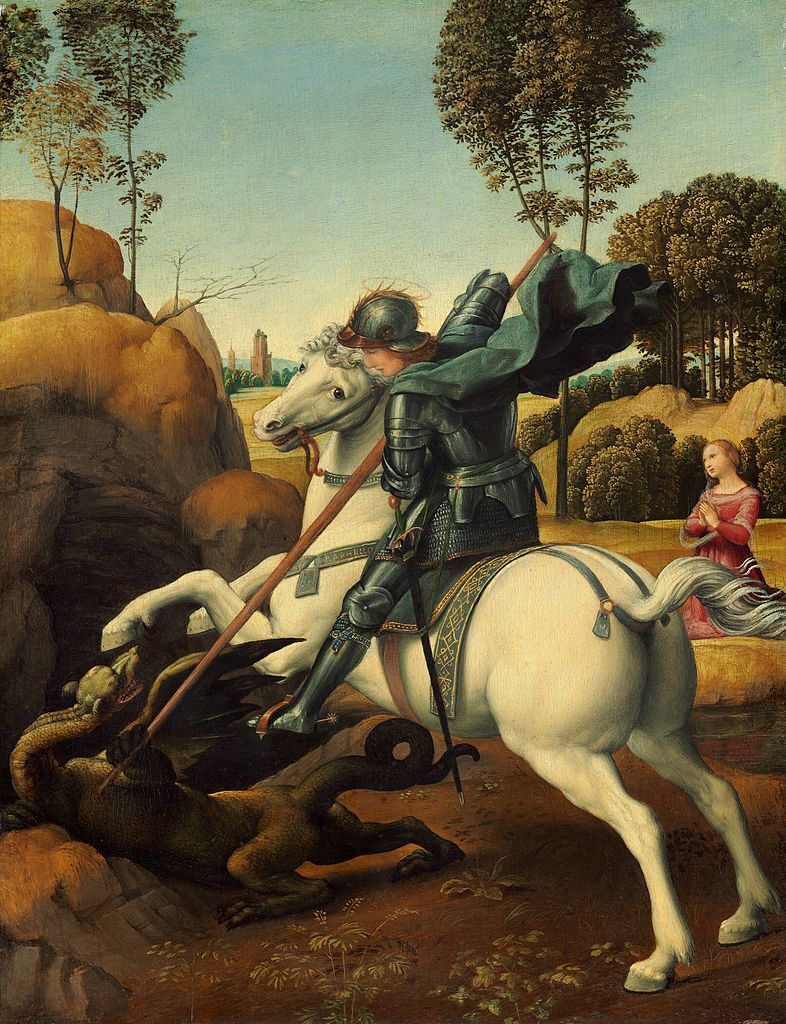 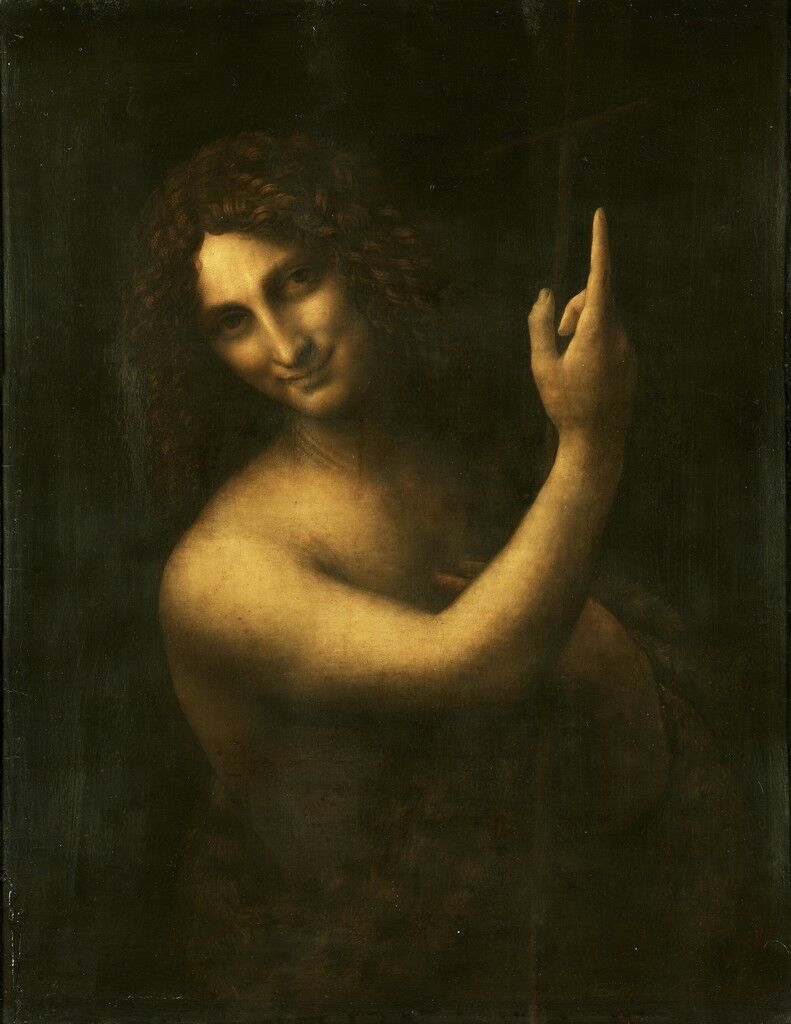 Leonardo da Vinci
Saint John the Baptist, 1513-1515
Musée du Louvre, Paris
Van Dyck was Charles I’s right-hand artist from 1632 on, painting hundreds of portraits of the king; his wife, Queen Henrietta Maria; and their growing brood. Charles had already demonstrated a particular taste for Northern European portraiture, owning several by such artists as
Albrecht Dürer
and Holbein, so his appointment of Van Dyck as court painter wasn’t exactly surprising. But Van Dyck—an accomplished portraitist in his homeland—eschewed the English court’s traditional, formalized portrait aesthetic in favor of a lighthearted, poetic naturalism that reflected the king’s own unique tastes.
Take The Five Eldest Children of Charles I (1637), which hung in his private breakfast room. Here, the young royal offspring appear far older in their luxurious silk attire. Yet they are simultaneously dwarfed by the family’s massive Mastiff, where Prince Charles II rests his small, seven-year-old hand; to his left, Van Dyck inserted his infant sister Princess Anne, flailing around like all babies do. Van Dyck had embedded an element of youthful play—suggesting that, while these may be royal kids, they’re still kids.
In 1639, a courtier named Abraham van der Doort completed his inventory of Charles I’s collection. At this point, the king owned at least 700 works—a number that would swell to almost 2,000 by the end of his reign. But the following decade would spell the end for Charles, as a series of wars broke out between England and Scotland. By 1642, his nation was embroiled in a civil war. After surrendering to the Scots, Charles I forged a secret alliance with the victors in attempt to overpower the group that defeated the Royalists in the civil war—resulting in a second civil war in 1648, where the king’s army again lost. The following January, Charles I was found guilty of high treason and sentenced to death.
Months after the king was beheaded in front of his Rubens-filled Banqueting House, nearly all of his collection was auctioned off in a series of so-called Commonwealth Sales. Unsurprisingly, Italian artists like Raphael and Titian were among the most highly valued from his holdings. Van Dyck and Holbein fared better overall than their northern counterparts, who generally commanded smaller figures. 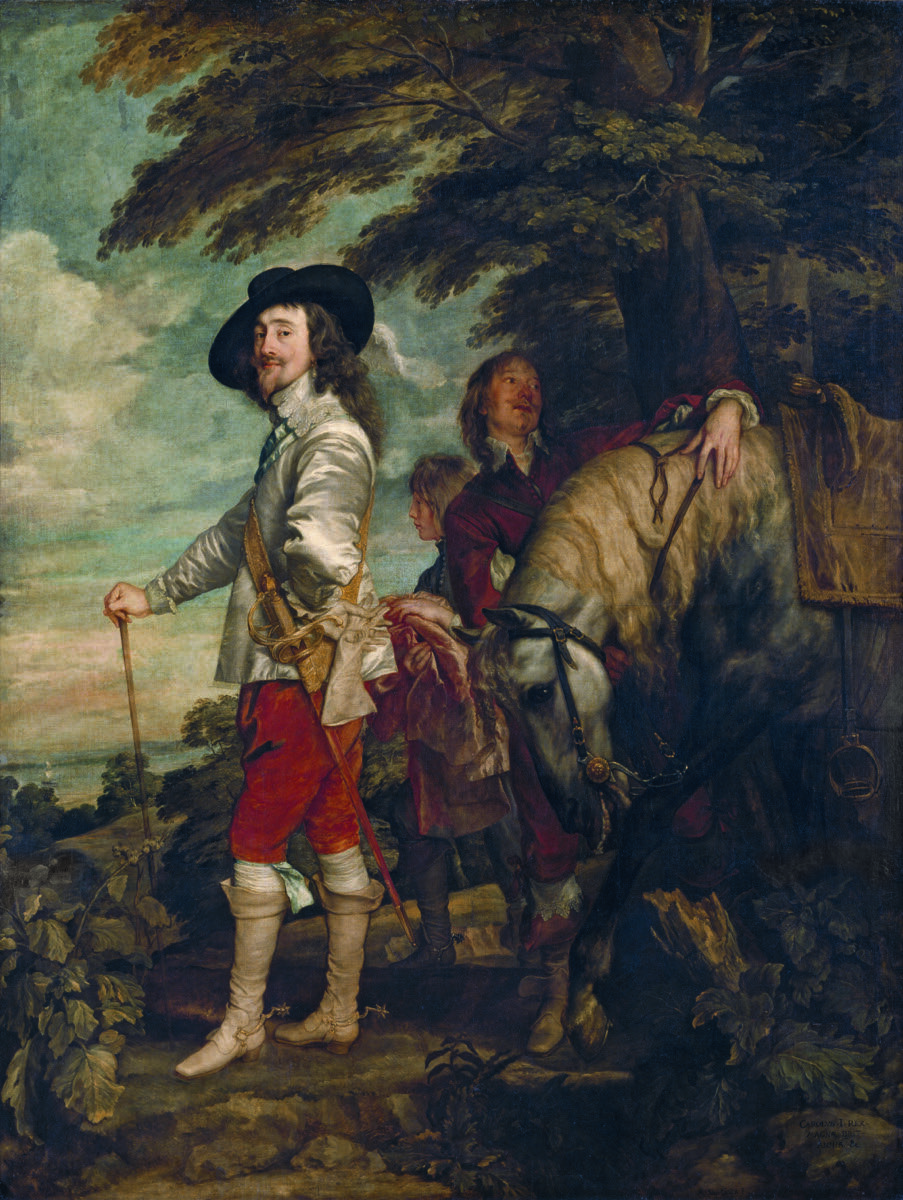 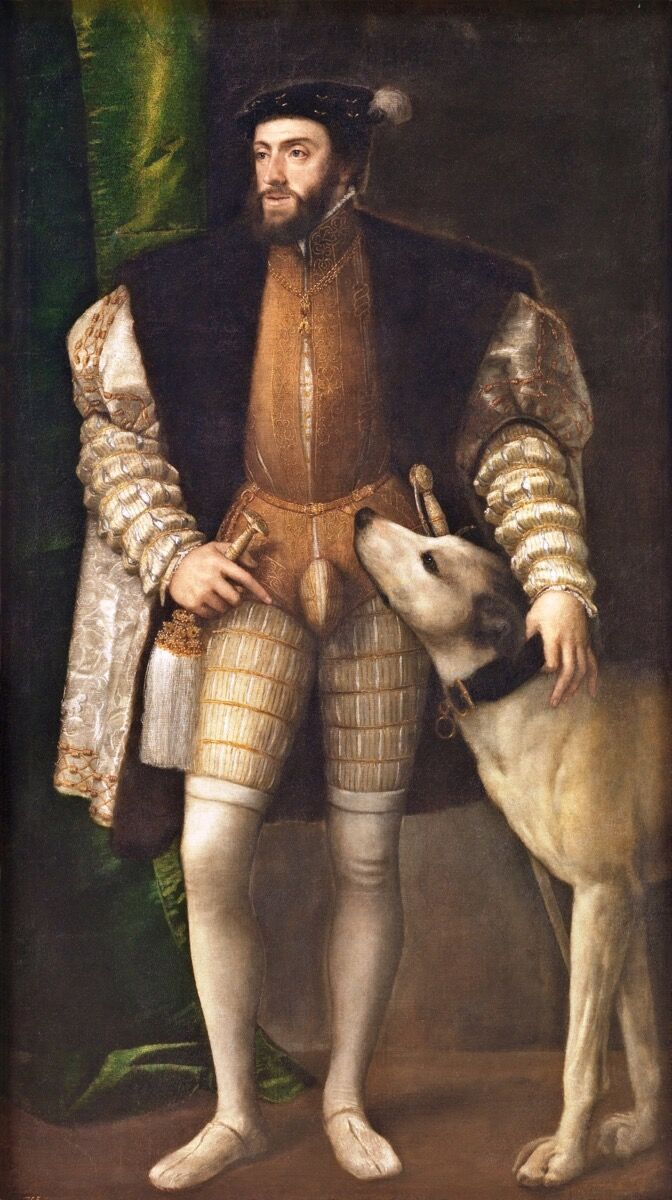 Titian, Charles V with a Dog, 1533. Photo via Wikimedia Commons.

Some of Charles’s most cherished pieces ended up at the French and Spanish courts, such as Van Dyck’s Charles I in the Hunting Field (1636) and Titian’s Charles V with a Dog (1533). (These works are now in the main holdings of the Louvre and the Museo Nacional del Prado, respectively.) Others passed between private collections and eventually landed at American institutions, like New York’s Frick Collection and the National Gallery of Art in Washington, D.C.
But a significant portion of Charles I’s original collection remains at home in the royal English court, due in part to King Charles II’s retrieval in 1660 of several works once owned by his father. Even today, some works from the collection are still being discovered—perhaps because a few ended up in the hands of commoners who may not have realized their significance. The king’s former plumber, for instance, walked away with a free painting by
Jacopo Bassano
titled The Flood (1570).
It is unclear whether Charles I anticipated the massive influence his collection would have in his homeland when he first started building it as a young prince. Regardless, its aesthetic legacy spread across England. Individual items like the Giambologna sculpture set a new “standard of aesthetic achievement and technical virtuosity” for British artists, while Van Dyck’s iconic royal portraits “created the enduring image of the King we remember today,” writes British artist and Royal Academy of Arts president
Christopher Le Brun
.
Charles’s collection also helped bridge the deeply rooted gap between the Italian and Northern Renaissance in the art-historical canon. While the former had been likened to “perfection” by influential scholars like
Giorgio Vasari
, the latter was long considered inferior, even “primitive,” by comparison. Yet by the mid-17th century, an English king had amassed a diverse collection that gave equal attention to the art of both regions, and achieving—in the words of Per Rumberg and Desmond Shawe-Taylor, curators of the Royal Academy exhibition—“a fusion of the Italian and the Northern into a single universal tradition.”
Kim Hart
Related Stories