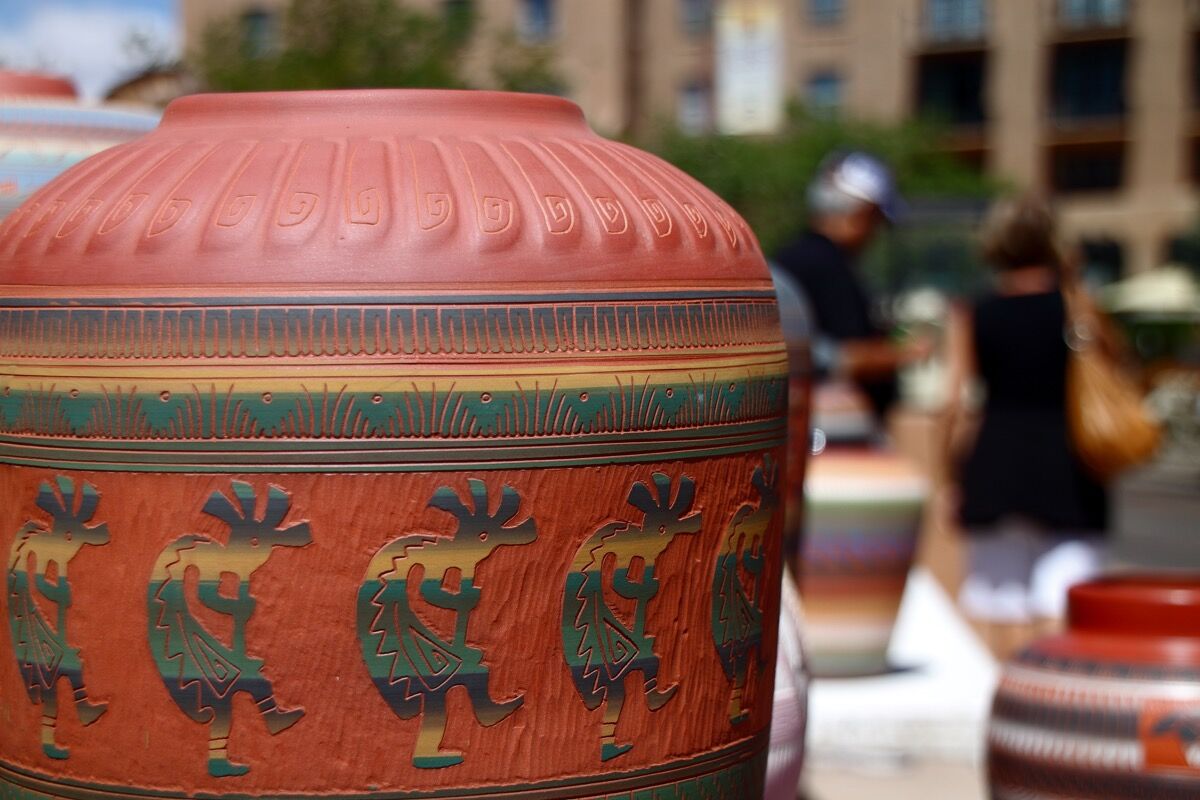 Most once-popular ancient symbols fell out of use thousands of years ago. But one sprightly, flute-wielding figure (sometimes portrayed with a very large, erect phallus) has survived through the ages.
He’s called Kokopelli: a prehistoric, musically talented fertility deity with roots in Native American culture, where he’s represented across pottery, cave art, and lore. Since the 1990s, he’s also become a ubiquitous motif in American popular culture, found on everything from tie-dyed T-shirts sold by online boutiques like “Moccasins Direct” to posters for jazz festivals in Tucson, Arizona. Tchotchkes marketed to all manner of Americans have appropriated Kokopelli’s form and myth. Indeed, as anthropologist Ekkehart Malotki pointed out in the 2000 book Kokopelli: The Making of an Icon, “It seems as if there is no limit to the ways in which the Kokopelli motif can be applied.”
Take Golfer-Pelli, a steel sculpture sold in a 1995 holiday catalog published by Minnesota Public Radio, which depicts a contemporary version of the pictograph as it swings a club. “It is believed that Kokopelli could make the wind talk and call the clouds,” the sales pitch reads. “Perhaps Golfer-Pelli can improve your swing!” Or consider the 32-foot-tall Kokopelli statue dubbed the “world’s largest Kokopelli,” which once advertised Arizona’s Krazy Kokopelli Trading Post souvenir shop. While the store has since shuttered, the massive figure now towers in front of a Starbucks. 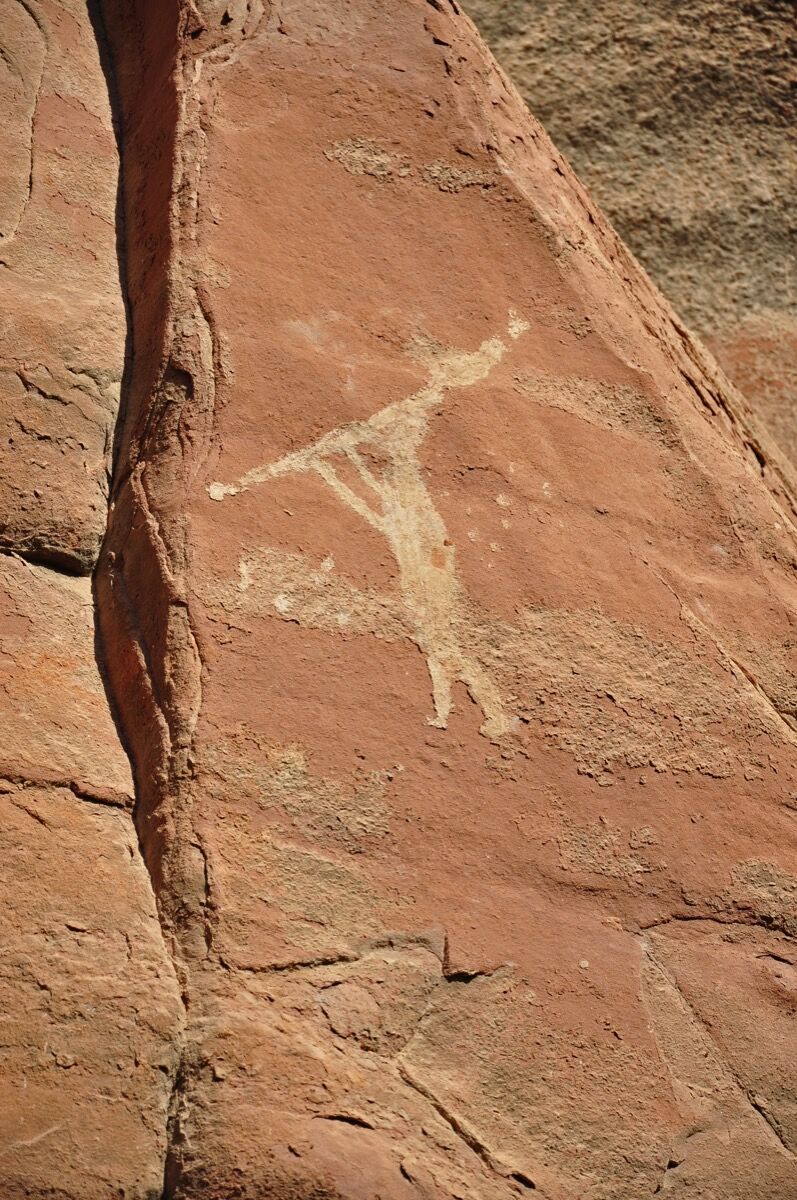 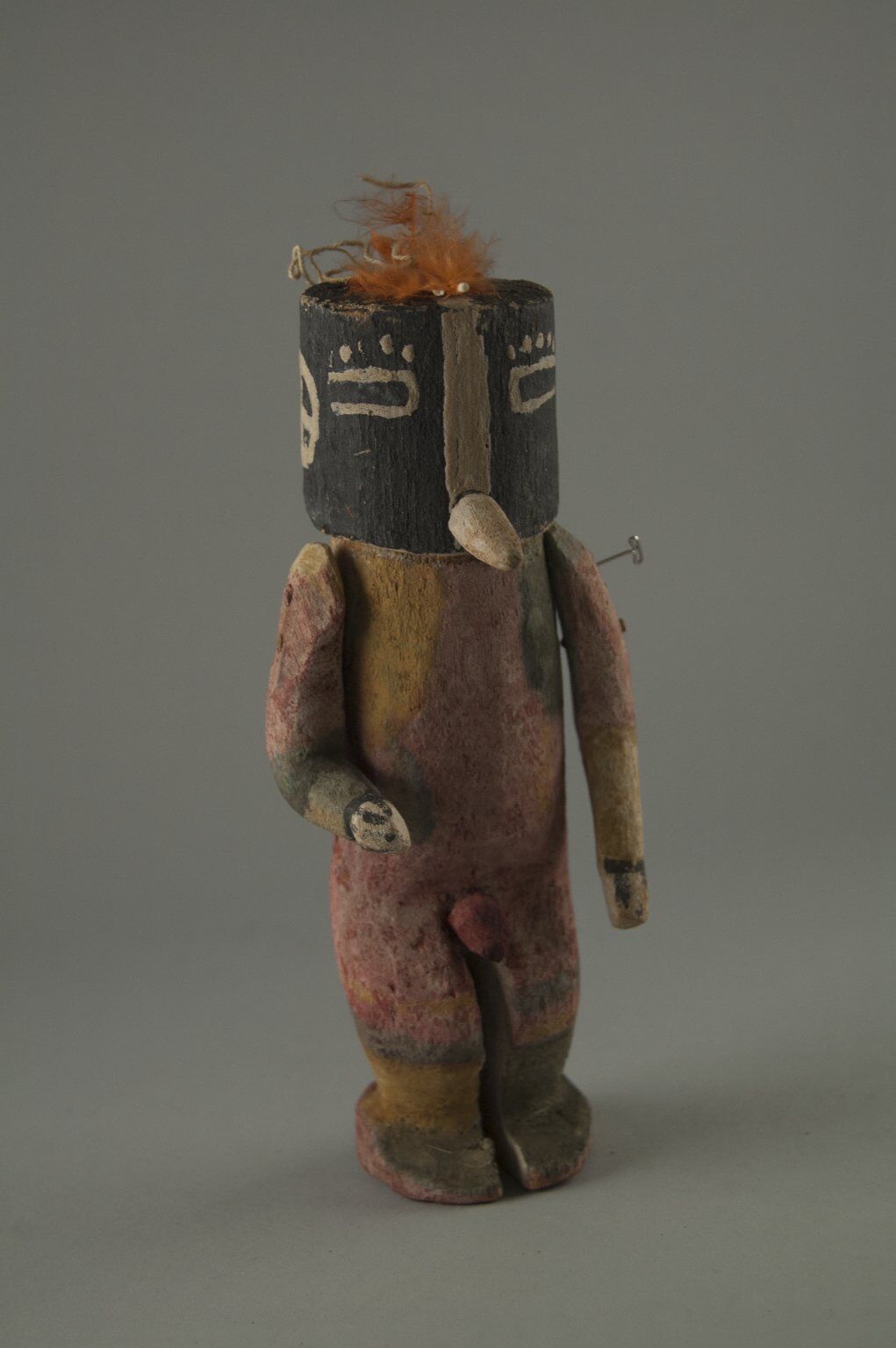 So why were Americans of the 1990s so fascinated with this virile little flautist? And why does he still crop up in the form of colorful bicep tattoos and as a decorative motif in desert vacation homes? (Full disclosure: This writer once booked a Southern California Airbnb complete with a Kokopelli wall hanging.) The answers lie in the age-old, somewhat mysterious symbolism of Kokopelli—and the many myths that surround it.
As far as experts can tell, one of the first visual instances of the figure appears on Hohokam pottery—vessels made for food storage, cooking, and ritual by the ancient peoples of present-day Arizona—around 1000 A.D. Around this time, it seems that similar male figures, often bearing flutes and phalluses, began showing up as petroglyphs in rock art made by ancestral Puebloan cultures across today’s American Southwest.
These depictions originated in lore that was developed by prehistoric Americans, and later evolved through different Native American tribes. As anthropologist Dennis Slifer has pointed out, Kokopelli didn’t spring from a single story, but instead is likely the result of a “complex merging of various myths, deities, personalities, and traits that evolved over a period of at least a thousand years.” 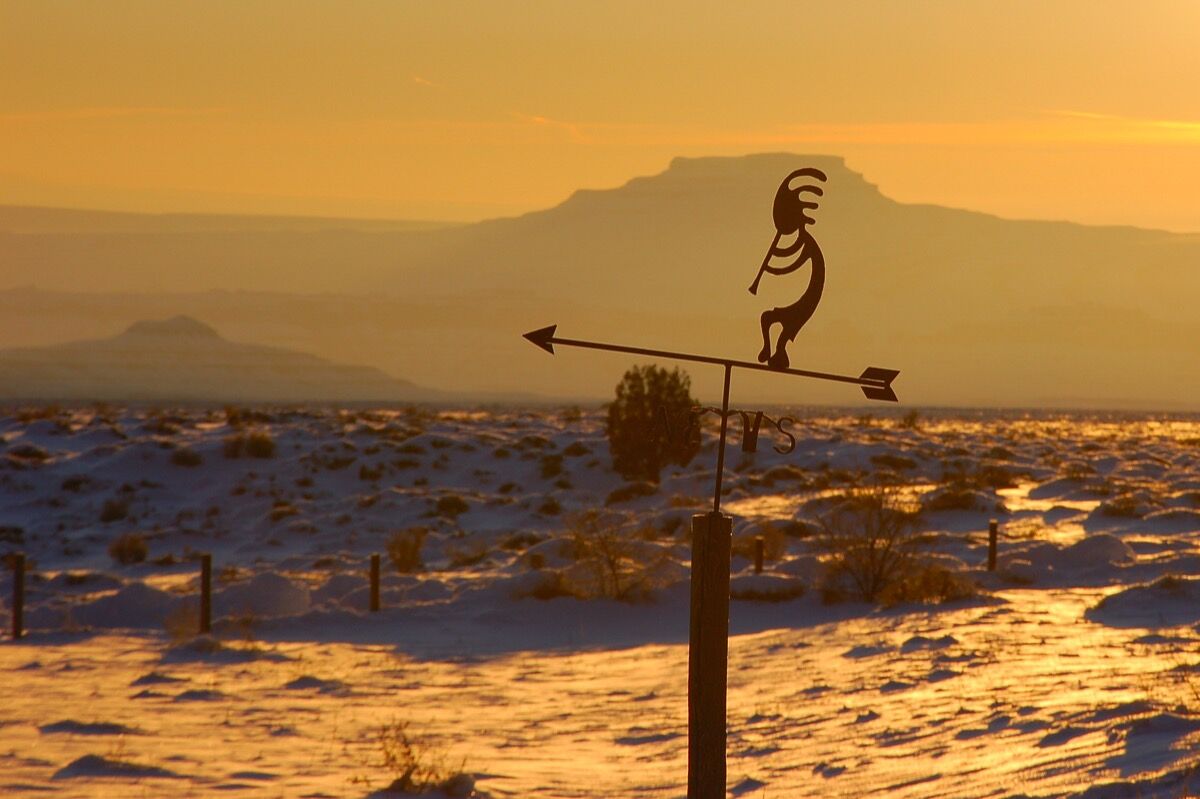 Kokopelli at the Valley of the Gods Bed & Breakfast, 2010. Photo by Larry Lamsa, via Flickr.

Advertisement
As a result, pictographs of the flute player range in shape and form. (Hundreds still exist in their original locations, as documented in Slifer’s 2007 book Kokopelli: The Magic, Mirth, and Mischief of an Ancient Symbol.) Some have hunched backs, while others stand tall. Some resemble insects with antennas; others, birds. Then there are those who look more human, complete with long instrument and manhood raised high.
All of these disparate figures represented fertility, in an overarching sense. According to most Native American tales, Kokopelli travelled from village to village, conjuring rain and a fruitful harvest with the sounds of his flute. His breath powered his instrument, but it also symbolized the wind, which was considered “an essential pathway for life forces from which rain, maize, and human life were derived,” Slifer wrote.
Kokopelli’s fertility powers extended beyond agriculture, too. The figure’s humpback not only represented sacks of seeds, but a way for him to carry the songs he used to attract women. His flute, in particular, symbolized the power to woo. Across many Native American tribes, such instruments were used to create “signals and serenades” that conjured “love magic,” according to Slifer. In some Kokopelli depictions, the god’s powerful libido was emphasized in blunter terms: through the addition of a visible, turgid penis.
It’s probably these primordial powers—to make babies and bring abundance—that have captivated Kokopelli fans through the ages. “There is something archetypal and universally appealing about the flute player character,” Slifer has written. “The widely held beliefs that he was a fertility symbol, roving minstrel or trader, rain priest, shaman, hunting magician, trickster, and seducer of maidens.” In other words, Kokopelli has something for everyone: those interested in music, magic, sustainability, and sex. 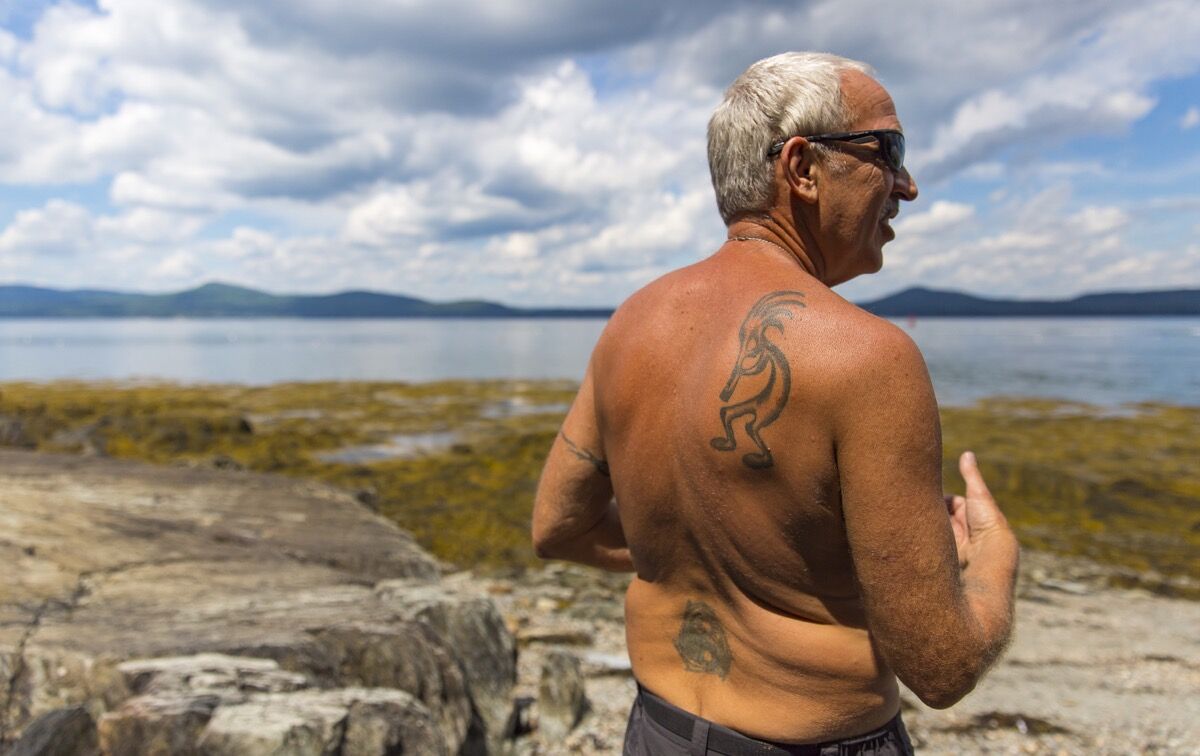 Kokopelli’s adoption by mainstream culture in the 1990s—the height of “Kokopellimania,” as scholar Ekkehart Malotki has dubbed it—was likely bolstered by the rise of New Age thinking and ecological activism. These forces “helped pave the way for the acceptance of Kokopelli as a nostalgic icon of the noble savage,” Malotki has written, alluding to problematic issues of cultural appropriation that surround Kokopelli’s popularity.
Indeed, by the ’90s, Kokopelli had joined the “Great Spirit,” “Mother Nature,” and dream catchers as New Age trademarks, which symbolized a back-to-nature approach (perhaps, as Malotki points out, a response to the tech boom and increasing reliance on computers and the internet). Kokopelli began showing up on T-shirts and magnets, and was incorporated into logos for businesses ranging from organic food co-ops to ayurvedic massage spots.
The character has also come to signify, more simply, a free spirit. And many who wear T-shirts and buy pottery decorated with his likeness seem unaware of Kokopelli’s origins, identifying him simply as an symbol of hippie or New Age subculture. 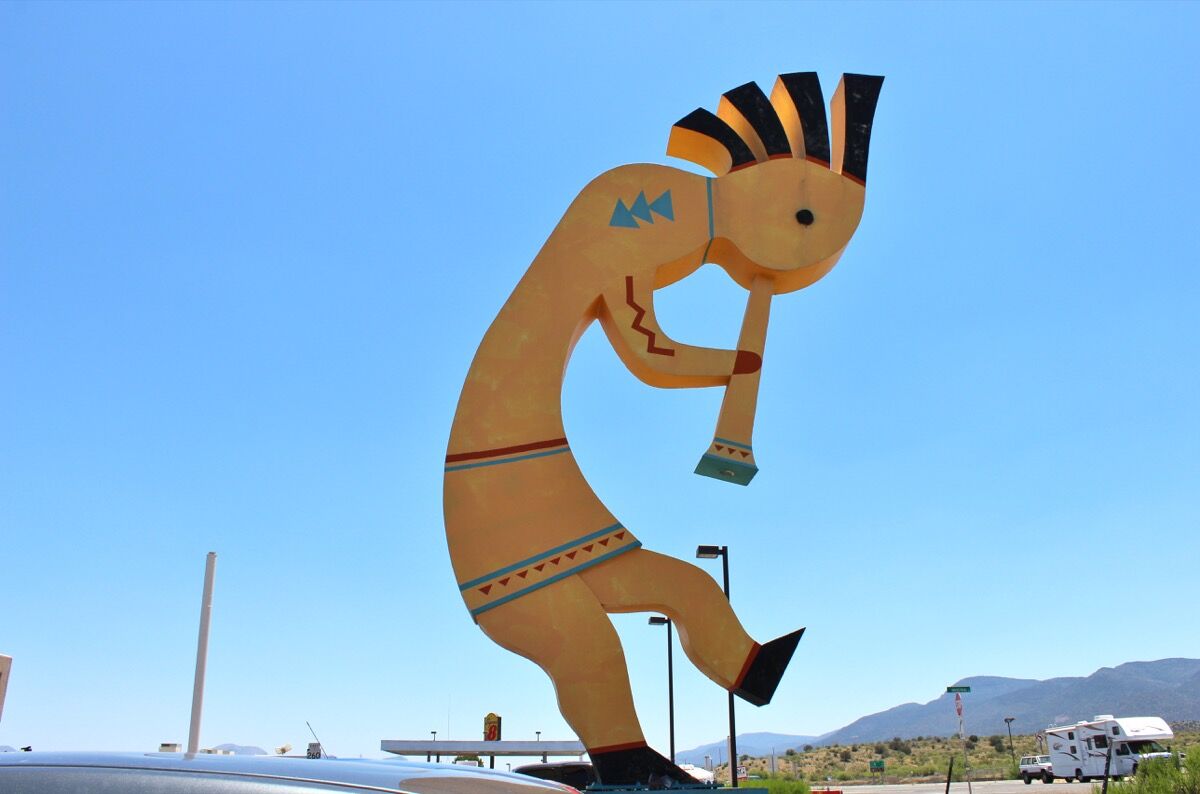 Instead of a humpback, for instance, contemporary interpretations show Kokopelli with the arched back of someone jamming on his flute (rather than carrying seeds). The lines that extend upward from Kokopelli’s head, which likely originated as bud-like antennas in ancient times, were also transformed in the 1990s to resemble a mohawk or an artful arrangement of dreadlocks. In step, people began to fuse the Kokopelli image with the trappings of skateboarders, rock musicians, and mountain bikers across tchotchkes, T-shirt designs, and tattoos. (In my research, I even found a pair of thong underwear emblazoned with a Kokopelli surfer.)
Kokopelli’s contemporary popularity—and evolution into a commodity—also owes something to its simple, graphic form. Because it originated as a silhouetted stick figure, it is easily replicable across Southwestern souvenirs, home decor motifs, and graphic identities for a range of businesses.
Recent depictions, however, tend to quietly omit characteristics essential to the ancient Kokopelli—namely, his phallus, the most obvious marker of the figure’s original role as a fertility god. “To make the image safe for mass consumption, he has been emasculated and sanitized,” Slifer has written. In other words, Kokopelli has devolved from sacred fertility god into the family-friendly Golfer-Pelli.
But while Kokopelli’s origins are certainly obscured by ’90s kitsch interpretations, the ancient cave drawings and Native American lore that do remain intact reveal the Romeo-farmer-flautist’s greatest power: to bring a bountiful future, and perhaps even a healthy dose of carnal excitement.
Alexxa Gotthardt
Related Stories