This Is America’s Most Wanted Painting 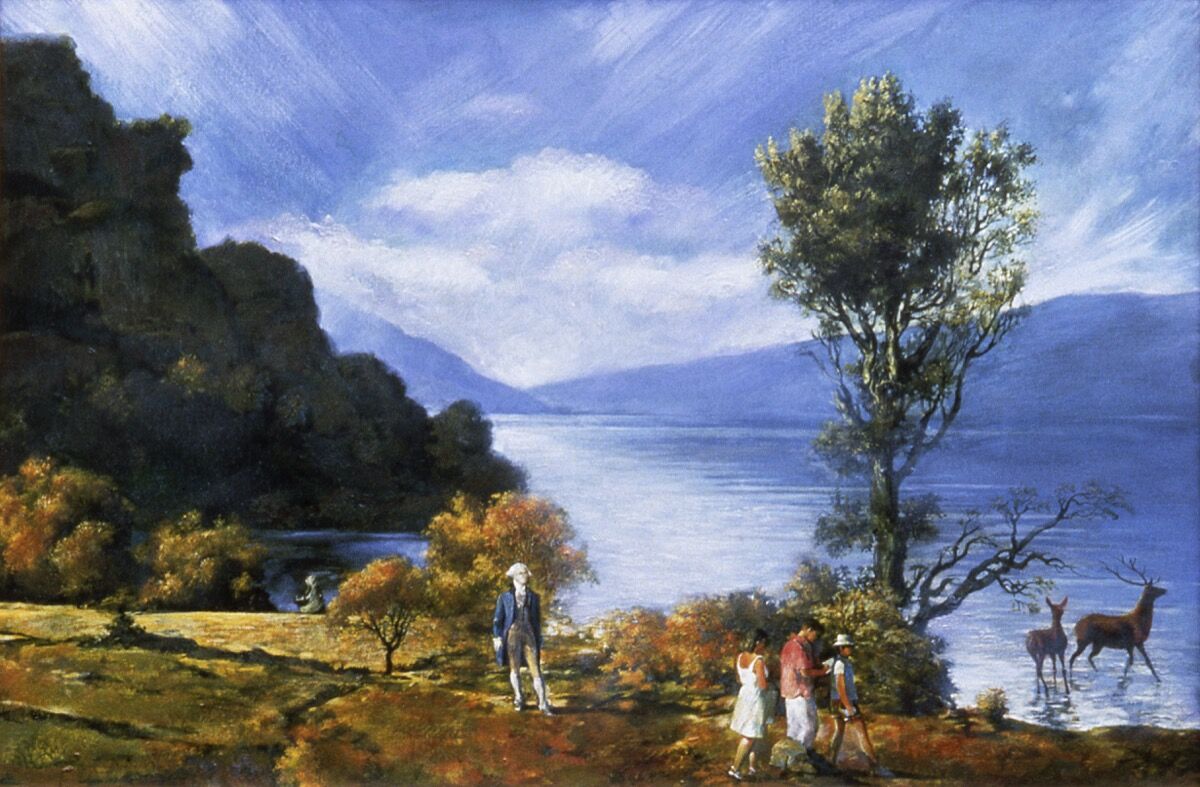 What’s your favorite color? Do you prefer paintings with sharp angles or soft curves? Do you like smooth canvases or thick brushstrokes? Would you rather look at a painting with figures that are nude or fully clothed? Should the people in the painting be at leisure or working? Should they be indoors or outside, and if the latter, in what kind of landscape?
These are a fraction of the questions that the survey research firm Marttila & Kiley, Inc. asked 1,001 ordinary Americans over 11 days in December 1993. The firm had been hired by
Vitaly Komar
and
Alexander Melamid
, two artists born in the former Soviet Union who emigrated to the U.S. in the late 1970s. For their project “The People’s Choice,” they set out to figure out the elements that would constitute their countrymen’s “most-wanted” and “least-wanted” paintings. Then, they produced actual versions of both.
“In the early 1990s, I felt ready to be part [of] what is called ‘American People,’” Melamid recalled during a recent email interview. “The political class used then, and still uses now, [the phrase] ‘American People’ a lot: American people want that, American people are the best. The question was, obviously, what is [the] American People and I am one of them? To find out the truth about American people, politicians, entrepreneurs, fraudsters, fundraisers, and pundits use polls. Why not artists?”
“The People’s Choice” was a straight-faced satire of the complaint that contemporary art is too elitist and should cater to populist tastes—an especially popular refrain coming from the political right during the culture wars of the 1980s and early ’90s.
Komar & Melamid
’s survey turned up admittedly fascinating statistics: 44% of Americans said they preferred the color blue; 49% of them favored outdoor scenes that depict lakes, rivers, and oceans; 41% expressed a preference for large paintings, with more than 60% favoring dishwasher-sized paintings, while less than 20% wanted their paintings to be refrigerator-sized; and 56% of Americans said they wanted historical figures in their paintings, rather than modern celebrities.
But democracy can be fraught. The most-wanted painting Komar & Melamid eventually unveiled at the Alternative Museum in Manhattan in 1994 is about as damning an indictment of art-making by committee as anyone has ever devised. It looks like a rushed
Hudson River School
canvas that had been touched up by Thomas Kinkade.
The very blue landscape painting depicts a lakeside scene that might seem innocuous at first glance. In the foreground, three figures in seemingly modern dress—hikers, perhaps—walk toward the lower-right-hand corner of the painting. Just ahead of them, two deer are frolicking, but they also seem to be walking on the surface of the lake. Could this be a futuristic, dystopian nature scene? Maybe. But near the center of the composition, a man is standing in conspicuously old-fashioned garb. Is he a wayward trick-or-treater? Not exactly.
“Even from a distance, I knew it was George Washington, and I find that disturbing,” museum-goer Brian Keith Jackson told the Associated Press in 1994. “This painting is so dull, so predictable. It’s like something you could buy at Kmart.”
Clearly, populism had its limits. But if the most-wanted painting provoked revulsion for some, what about Americans’ least-wanted painting? Only a quarter of U.S. survey respondents said they looked for modern art when decorating their homes, while 60% said they favored figuration over abstract or stylized imagery. And while 43% claimed
Norman Rockwell
as their very favorite artist, only 4% picked
Jackson Pollock
. Sharp angles, geometric forms, and clearly separated colors all proved very unpopular. So, Komar & Melamid created a tiny, heavily textured jumble of crisply defined yellow, red, orange, and gray triangles. It’s the kind of generic abstraction that might appear on the wall in a low-budget movie scene set at a modern art gallery. Or, as a less forgiving New York Times writer put it, “it looks like the ragged old linoleum under the kitchen stove, only oranger.” 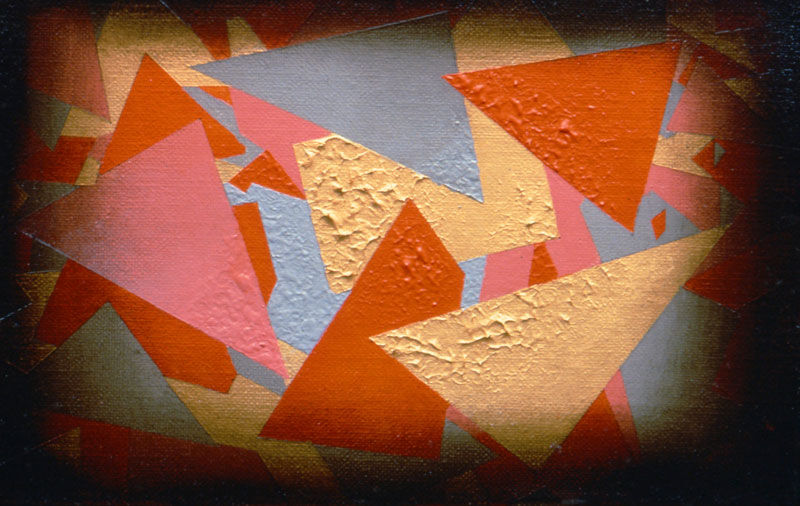 Of course, eliciting very strong and different reactions to artworks that people were supposed to agree upon was part of the point. In fact, according to Komar, “The People’s Choice” was inspired by a very common experience: witnessing two diametrically opposite responses to the same exhibition.
“In 1974, Andrei Sakharov, a famous dissident and the father of the Soviet hydrogen bomb, attended an underground apartment show of [our work],” he said. “I was intrigued by his positive response to our works and his spouse’s negative reaction.” The next day, the duo began discussing the project that would eventually become “The People’s Choice,” though it would take many years and a change of continent before it came to fruition.
“In a totalitarian state, truthful statistics are a matter of state secrets, and we could not realize our utopian project back then,” Komar said.
Komar & Melamid were living in Moscow at the time, where the Communist government and everything it controlled were intended to serve the people. Indeed, a 1977 exhibition marking the 60th anniversary of the October Revolution took a quote attributed to Lenin as its title: “Art belongs to the people.” But in practice, the Soviet people were rarely consulted on what kind of art they wanted, and the only acceptable, government-mandated style was
Socialist Realism
.
“Socialist Realism claimed that it represented the art for people, and therefore reflected peoples’ tastes, although it was a purely propagandistic style imposed from above,” said Julia Tulovsky, curator of Russian and Soviet Nonconformist Art at the Zimmerli Art Museum at Rutgers University. “In America, where the most prevalent art trends are abstract and conceptual in nature, Komar & Melamid decided to infuse the element of democracy into the matter and truly ask the people what they like. Ironically, the results of their sociological study was close to the doctrines of Socialist Realism.”
Asking people what they want, it turned out, was easier in a capitalist society: After all, it’s the first step toward selling them what they think they want. It would be another two decades before Komar & Melamid, now émigrés based in the New York, made good on their idea to create art tailor-made to people’s professed desires.
“Modern art and social sciences were born at the same time in the end of the 19th century, driven by the desire to discover something new and surprising,” said Melamid. “By the end of the 20th century, polls were used to soothe our anxieties and tell us what we already know and believe.”

A world tour of taste 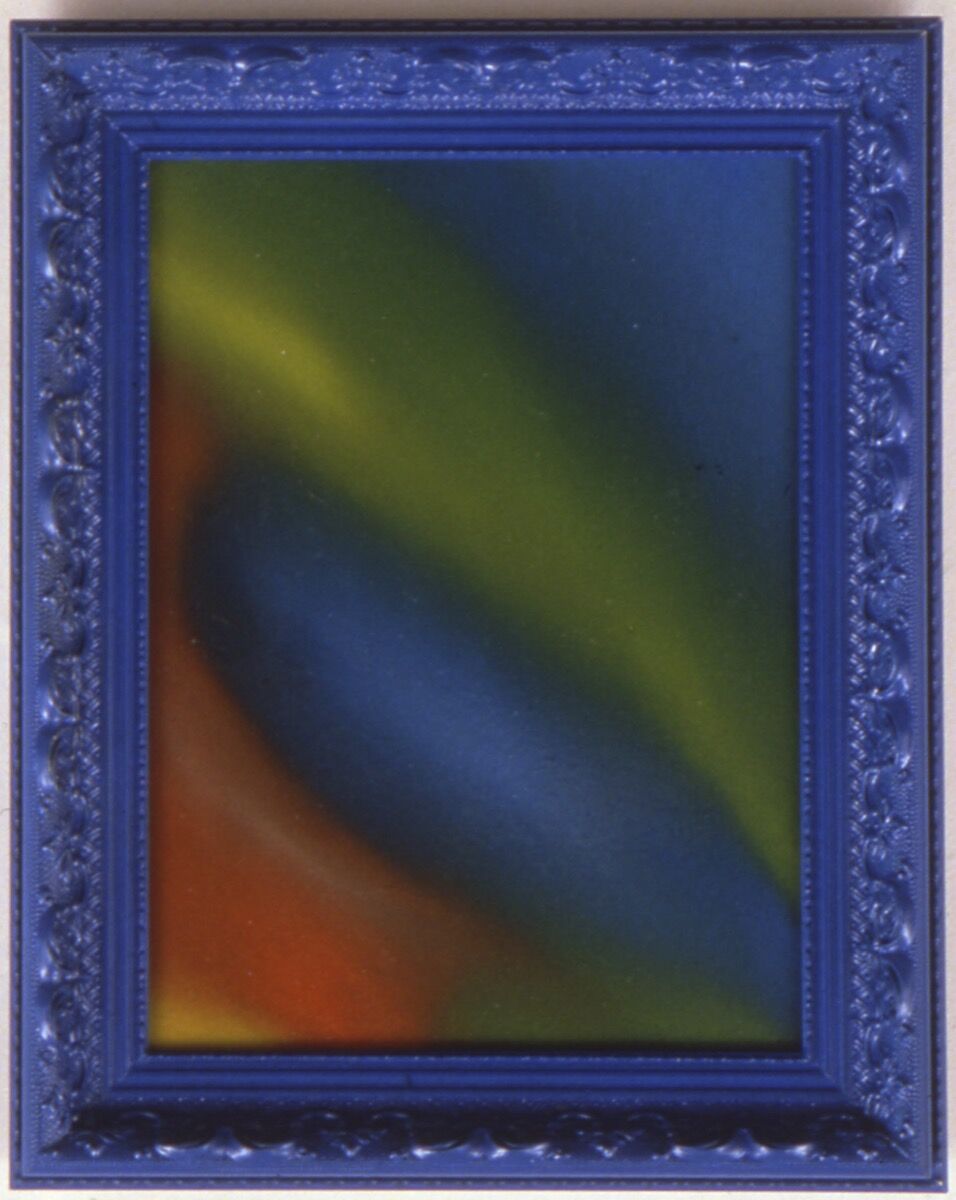 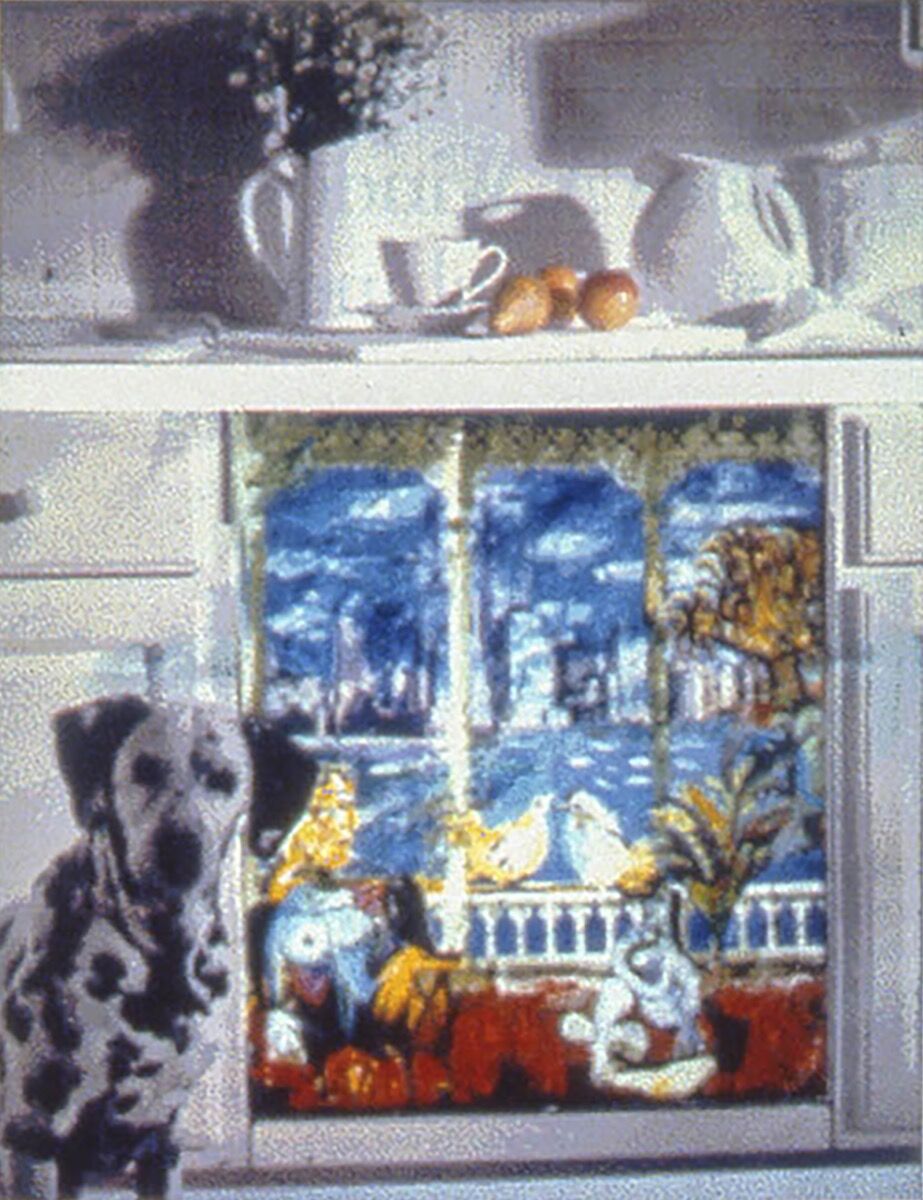 Advertisement
A year after “The People’s Choice” had its debut, the Dia Art Foundation and Chase Bank commissioned Komar & Melamid to take their project global. In the end, they polled people in 13 more countries—including their native Russia—to create the most- and least-wanted paintings for each.
Though thousands participated, not everyone was thrilled with the duo’s international experiment in artistic populism. The project’s website includes an extensive compendium of messages the artists received in response to their survey in the first two years of the Dia commission. One participant from Macau wrote in to complain that their questionnaire was “oversimplistic” and resembled one that might have been “made by the manager of a third rate supermarket trying to understand the taste of his suburban customers so he could get the right stock of merchandises.” The duo’s response was a testament to their love for their new country. “American grocery stores are the best grocery stores in the world,” Komar & Melamid replied, “which you can’t say about American art.”
The project was Dia’s second-ever internet-based artist commission, and as such, Komar & Melamid sought to harness the potential of this then-new technology. In addition to attempting to measure distinct national tastes, the duo created “The Web’s Most Wanted” and “The Web’s Least Wanted” images based on the responses of 3,001 people who took a poll on their website. If America’s most-wanted painting was subtly quirky, the web’s most-wanted image was a full-on visual madlib, with the duo’s
Henri Matisse
–style painting of an interior pasted incongruously into a digital photograph of a Dalmatian standing in an all-white kitchen.
While internauts’ tastes bucked the trend, the majority of countries ended up with similar “most-wanted” and “least-wanted” paintings. Save for the figure of Jesus lurking in the bushes, Russia’s most-wanted painting was strikingly close to America’s vision of an ideal painting, with two children playing near the edge of a crystal-blue lake. People in just about every country polled—from China and Kenya to Iceland and Ukraine—seemed to want the same inoffensive sort of painting: a quaint waterfront scene with lots of blue.
“Today, I see the results of the project ‘People’s Choice’ as a parody of the travesty of populism and elitism,” Komar said. “I think that these two basic choices of the majority—a blue landscape—will remain unchanged in the 21st century.”
The only country to end up with an abstraction as its most-wanted painting and figuration for its least-wanted painting was the Netherlands. Dutch survey results championed a fluid composition of bright green, blue, and red, with a dash of yellow in one corner. The country’s least-wanted painting is a predominantly yellow, impressionistic interior scene, in which a cat sits on a kitchen counter gazing out a window at—what else—a blue landscape, in which skyscrapers loom over the figure of Jesus on a crucifix.

You can’t please everyone all the time 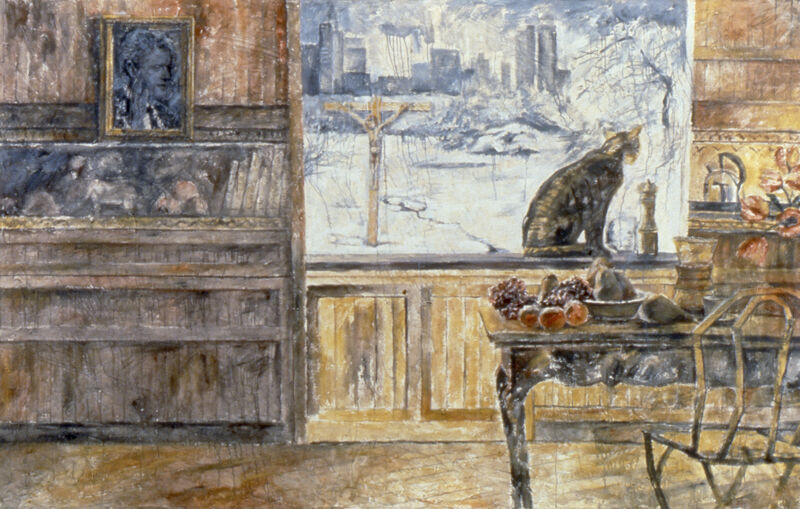 Right after their crowd-sourced paintings struck a chord, the duo applied their scientific approach to artistic production to one much more popular medium. In 1997, based on the results of a poll asking people what kinds of music they did and didn’t like, Komar & Melamid teamed up with composer Dave Soldier and lyricist Nina Mankin to create the “most-wanted” and “most-unwanted” songs. The former is a 5-minute-long R&B love song; the latter, a 22-minute, accordion-heavy postmodern epic whose long stretches of “cowboy music” are interspersed with a rapping opera singer. But even that Frankensteinian tune found some fans on the dance floor, as a short VH1 documentary on the project memorably attested.
Though Komar & Melamid ceased making work as a duo in the early 2000s, they haven’t ruled out revisiting “The People’s Choice” for its 25th anniversary next year. Melamid says he’s interested in conducting new polls in Russia and the United States “to compare the fluctuations of our prejudices in the last 25 years.”
Komar, for his part, would rather poll people on their tastes in public art the next time around. “The participants of [the 1990s] surveys imagined ‘most-wanted’ paintings hanging on walls of their homes, in their private spaces,” he said. “Today, I would put together a survey dedicated to public art—art that is being perceived by the masses outside of their homes, museums, and private art galleries.”
Given the debates about public statues and monuments currently happening all around the U.S., the timing may be perfect for some survey-sourced outdoor art. For now, though, the duo’s experiments in poll-driven artmaking stand as satiric yet insightful rebuttals to the calls for more populist contemporary art and greater accountability for public art projects. Evidently, the art made according to the public’s professed tastes isn’t always to the public’s liking. Or, as one respondent identified only as “ed” wrote to Komar & Melamid: “only a bank could appreciate these paintings.”
Benjamin Sutton is Artsy’s Lead Editor, Art Market and News.
Related Stories