Maxwell Williams
Jan 19, 2016 11:00am
Nothing defines Los Angeles, that sprawling California metropolis, quite like its medley of neighborhoods. Hollywood is known for its mansion-dotted hills and Golden Age ghosts, Downtown for its charged clash of high-end condos and Skid Row, and Santa Monica for its muscle beaches and oceanfront views. These, and the hundreds of areas in between, each with their own personality, make up the city’s storied landscape—and L.A.’s art scene spreads through all of them.
Over the past seven years, Art Los Angeles Contemporary (ALAC) has galvanized the city’s diverse cohort of neighborhoods at the end of January. To coincide with the art fair, blockbuster shows, performances, galas, and openings by ace artists transpire around the city, coming together informally as “L.A. art week.”

Because L.A. can be a difficult city to navigate (we’ve all heard the tales of titanic traffic jams), we consulted with in-the-know locals—Broad Museum director Joanne Heyler, ForYourArt’s Bettina Korek, artists Sarah Awad and Calvin Marcus, and gallerist Anat Ebgi—to send us in the right direction for galleries, food, and shopping in the City of Angels. 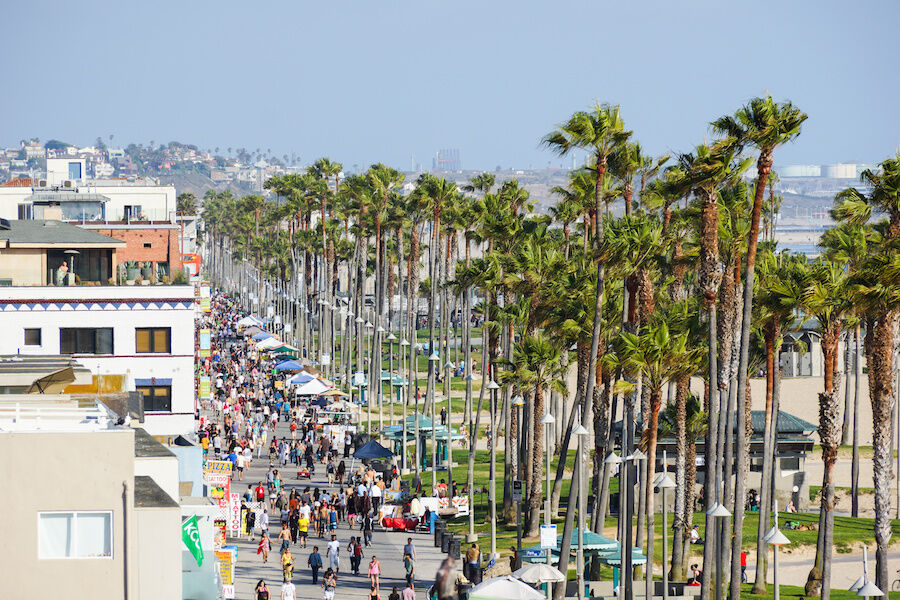 Advertisement
Situated along an ocean dotted with surfers, Santa Monica operates like a beach town and moves at a slower pace than the rest of L.A. One of the city’s few neighborhoods that might be easier to traverse by foot than by car, it’s covered with restaurants, bars, and art spaces, and, in January, is home to L.A.’s largest art fair.

ALAC, now in its seventh year, is the crux of L.A. art week, playing host to over 70 galleries—plus several more in their new program, Freeways, which gathers galleries less than four years old. Look out for talks, lectures, and performances, too—including
Alison O’Daniel
’s much-anticipated collaboration with the Centennial High School marching band.
B | Bergamot Station

A defunct trolley depot—soon-to-reopen as a stop on the light railway Expo Line connecting Downtown with Santa Monica—Bergamot Station has doubled as a mainstay arts complex since 1994. Across the property, a mix of highbrow and lowbrow galleries, including Patrick Painter Inc., William Turner Gallery, Craig Krull Gallery, and Robert Berman Gallery, join art and design studios, event spaces, and cafes.
C | Coast

An ultra-luxury hotel with a fabulous art collection (think David Hockney), Shutters on the Beach is also the home of Coast, a quiet restaurant with a perfect view of the beautiful, blue California coastline (again, think David Hockney). The lobster roll is one of the best in the city.

East of Santa Monica, Culver City is a patchwork of commercial storefronts and industrial buildings, including the massive Sony Studios campus. It’s also been regarded as L.A.’s art epicenter, dubbed “Little Chelsea” for its high concentration of galleries. While art spaces have since dispersed across the cityscape, Culver still bustles with art, boasting many of the city’s most established white cubes.

Right in the middle of gallery row is the Mandrake, a laidback artist-run bar—and the perfect spot to quaff a potion after gallery hopping, according to Anat Ebgi, whose space sits right next door. “We often come here after our openings for drinks,” she notes.
K | Arcana: Books on the Arts

Ebgi also suggests stopping at Arcana, an art bookstore in the Helms Bakery District, full of excellent new and rare used tomes. “Arcana is one of the best resources for art books in the entire city,” she explains. “It's really worth taking some time here to browse their collection.” 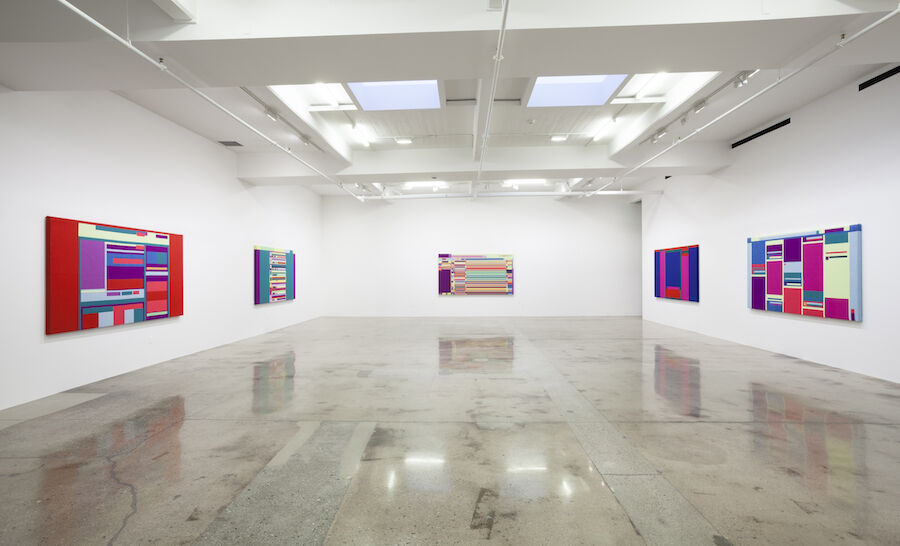 Hollywood houses perhaps the most improbable outcropping of L.A. art spaces, scattered across this famed landscape of boulevards, Spanish revival architecture, and lingering production studios (remnants of Hollywood’s Golden Age). A bevy of top-notch galleries have found their home in the cozy corridor just south of the bustle of Hollywood Boulevard, centered on the Santa Monica-Highland Avenue intersection.

After grazing the galleries, grab a snack at one of Awad’s favorite nooks. “If I’m walking that strip looking at shows, I would stop for a bite at Blue Window, a takeout window run by Mud Hen Tavern with a changing themed menu of small bites [and] street food,” explains Awad. “It’s not open on weekends, though,” she warns.

We also recommend checking out Amoeba Records, the legendary, colossal music store on Sunset Boulevard to pick up a few CDs (yes, they still exist) for when you’re stuck in that famous L.A. rush hour traffic.

The food at Musso & Frank’s is delicious, but it’s all about the martini. And it doesn’t hurt that literary heroes Dorothy Parker, F. Scott Fitzgerald, and Raymond Chandler used to hang out here, making it a perfect place to mingle with highbrow ghosts after a day of art-world hustle.
U | Gagosian Gallery, Beverly Hills

Full of wide, palm-tree lined avenues and mid-century homes, Miracle Mile embodies classic L.A. “Halfway between the beach and downtown on L.A.’s main thoroughfare, Wilshire Boulevard was originally envisioned as a retail center but is home to a sampling of unique L.A. ‘miracles,’ anchored by the city’s encyclopedic museum, LACMA,” explains Bettina Korek, L.A. County Arts Commissioner and founder of independent arts organization ForYourArt. Here, she takes us on a journey down this famous stretch of Wilshire Boulevard.

The La Brea Tar Pits are a National Historic Landmark, a notorious mass of naturally occurring asphalt that’s billed as the “world’s most famous ice-age excavation site”—prehistoric animals were trapped and ultimately preserved by the tar. “Where else can you travel back in time to when dinosaurs roamed and 10 minutes later visit a contemporary art gallery?” says Korek.
B | The Los Angeles County Museum of Art (LACMA)

The Los Angeles County Museum of Art (LACMA) is the lynchpin of L.A. art, with its huge campus offering one of the most impressive art-going experiences in the country. “Urban Light,
Chris Burden
’s sculpture made up of lampposts from across L.A., is a 24-hour selfie attraction,” says Korek. “And located within LACMA, Dagny Corcoran’s famous bookstore, Art Catalogues, consistently hosts some of best conversations with artists in the city. Check the daily calendar online.” On January 24th, the museum will unveil “Islamic Art Now, Part 2: Contemporary Art of the Middle East.”

“The institution often presents exhibitions of new work that employs traditional techniques, and their shop is one of LA’s best-loved stores,” says Korek.

This is one of those L.A. anomalies: a clutch of excellent galleries—Marc Foxx Gallery, ACME, and 1301 PE among them—all clustered together into half a city block. They all come “together in this great complex at 6150 Wilshire, just adjacent to the official beginning of the Miracle Mile,” says Korek. “Other galleries dot the area, with Sprüth Magers Los Angeles joining the neighborhood soon.”

“For a snack or lunch, Japanese cafe Yuko Kitchen is a local favorite, with charming proprietors and sushi specials, and homemade desserts, that can’t be beat,” hints Korek. 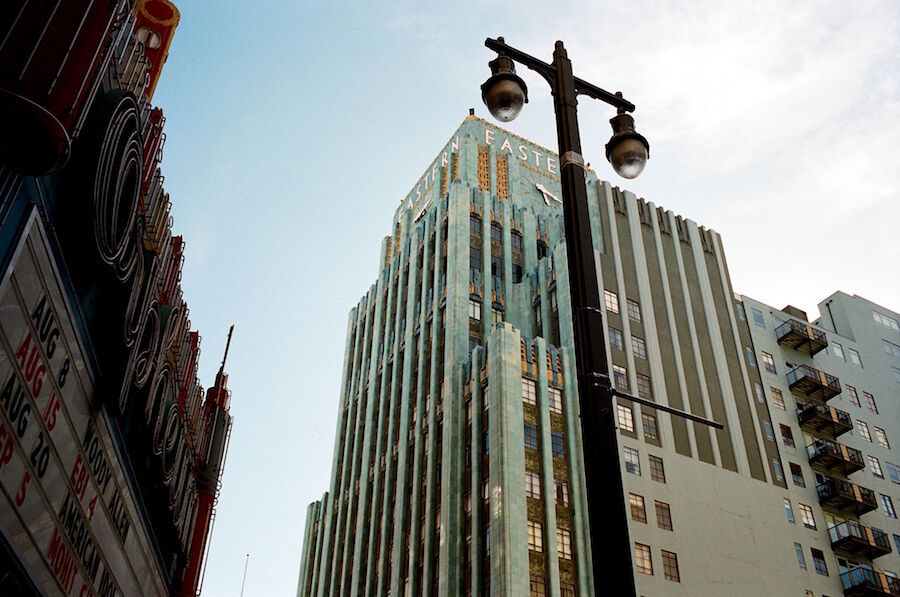 Downtown L.A. is no stranger to culinary delights—some of the best restaurants in the country exist here. The new kid on the block, Otium, has been garnering rave reviews since opening in November. “Otium just opened next to The Broad, and like our museum’s advance reservations, it books up fast,” says Heyler. “Helmed by the talented Chef Timothy Hollingsworth, formerly of The French Laundry, the restaurant offers inventive and delicious California cuisine in a stunning space. LA’s own Pulitzer-prize winning food critic Jonathan Gold is a fan. Not to be missed.”
M | The Museum of Contemporary Art Los Angeles

Since its opening in 1983, MOCA’s influence on Los Angeles art can’t be understated. “I’m thrilled to be MOCA’s neighbor now at The Broad,” Heyler says. “A visit to both institutions offers visitors a comprehensive and fascinating overview of contemporary art that has few if any peers in the world.” Opening January 23rd, “Catherine Opie: 700 Nimes Road” is the L.A. photographer’s exploration of Elizabeth Taylor’s Bel-Air mansion.
N | Bottega Louie

Bottega Louie is a no-frills but classy restaurant that’s been one of the best lunch spots in L.A. for years—the prosciutto pizza is decadent. “The white marble counters, soaring ceilings, and rows of colorful macarons make this bustling restaurant as pretty as it is delicious,” says Heyler.
O | The Last Bookstore

It may not literally be the last bookstore, but it’s one of Los Angeles’s best—a sort of analogue to NYC’s Strand. Their newly renovated art book section will make you want to drop some coin on a rare Rothko catalogue. “A sure antidote to Barnes and Noble and a great place to get lost,” says Heyler. “Whether you are looking for something new or used or not looking for anything in particular, you will find it—or it will find you—here.” 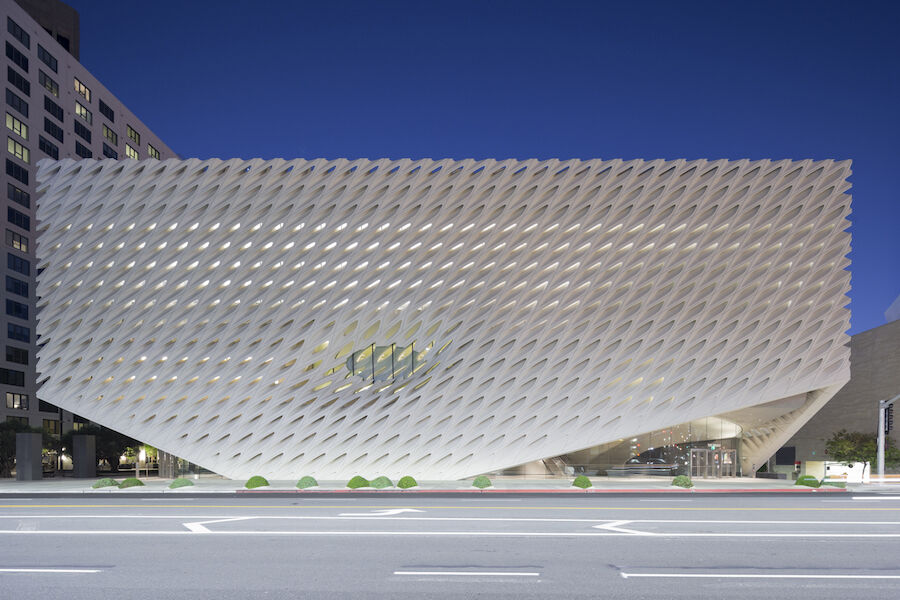 Heyler heads up the newest museum in L.A., The Broad, a display of Eli and Edythe Broad’s contemporary art collection, amassed over decades. “Of course, you must visit The Broad,” says Heyler. “Since opening in September, it has been amazing to see the excited and diverse audiences engaging with our collection and with the architecture of the museum. With free general admission, it is not to be missed on a visit to Downtown L.A.” In addition to the collection, the museum hosts a series of events and screenings by artists like
Martine Syms
and
Shirin Neshat
.
Q | 356 Mission / Ooga Twooga

Just across the L.A. River, in the Boyle Heights neighborhood, artist
Laura Owens
and gallerist Gavin Brown’s 356 Mission has basically changed the complexion of Los Angeles art with an invigorating mix of woolly and exciting exhibitions and performances. Currently on view is a show by textile artist Susan Cianciolo, through March 13. At the entrance to the gallery sits Wendy Yao’s Ooga Twooga—an offshoot of Ooga Booga, her Chinatown concept store with a cult following—where you can shop for clothes, books, and editions.

Be prepared to drive way out to Paramount Ranch, an old Western film set, for what might be the weirdest art fair in the world. Anything can happen there, not least of which is a chance to see some of the globe’s best emerging galleries gathered together. Run by Freedman Fitzpatrick’s Alex Freedman and Robbie Fitzpatrick, along with artists
Liz Craft
and
Pentti Monkkonen
, Paramount Ranch 3 is an absolute must-visit during arts weekend.
B | Human Resources

A non-profit art space in Chinatown, Human Resources produces an wide array of challenging performances and exhibitions. Perhaps the most political space in town, it programs the kind of art that is needed—and feels urgent.
C | Chin’s Push 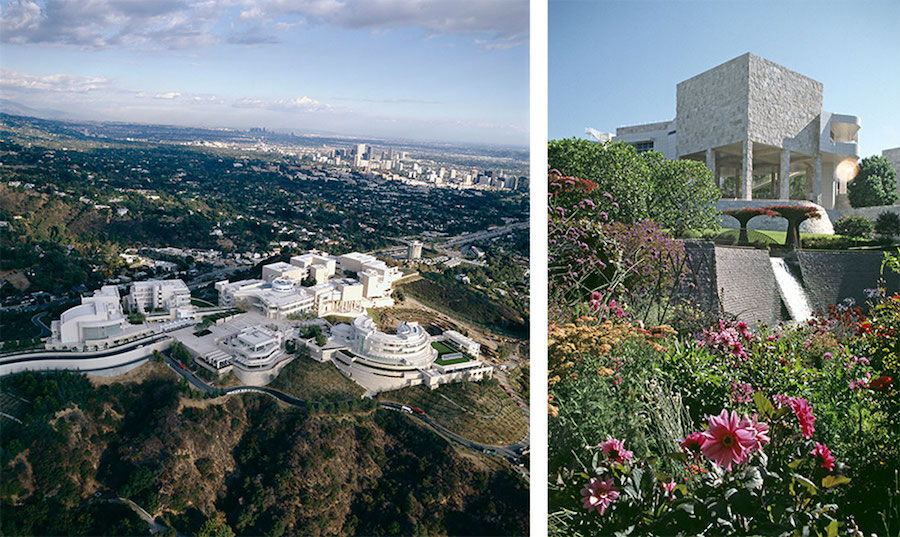 An art trip to L.A. wouldn’t be complete without a pilgrimage to what’s arguably the city’s most beautiful museum. Perched in the Santa Monica mountains, The Getty’s futuristic campus of five exhibition pavilions, research institute, and restaurant (all designed by starchitect Richard Meier—and used as backdrop for the 2013 film Star Trek Into Darkness) houses a sprawling collection of internationally renowned work—with a view. Surrounded by grounds and gardens designed by
Light and Space
pioneer
Robert Irwin
, the visit can border on transcendent.
Maxwell Williams