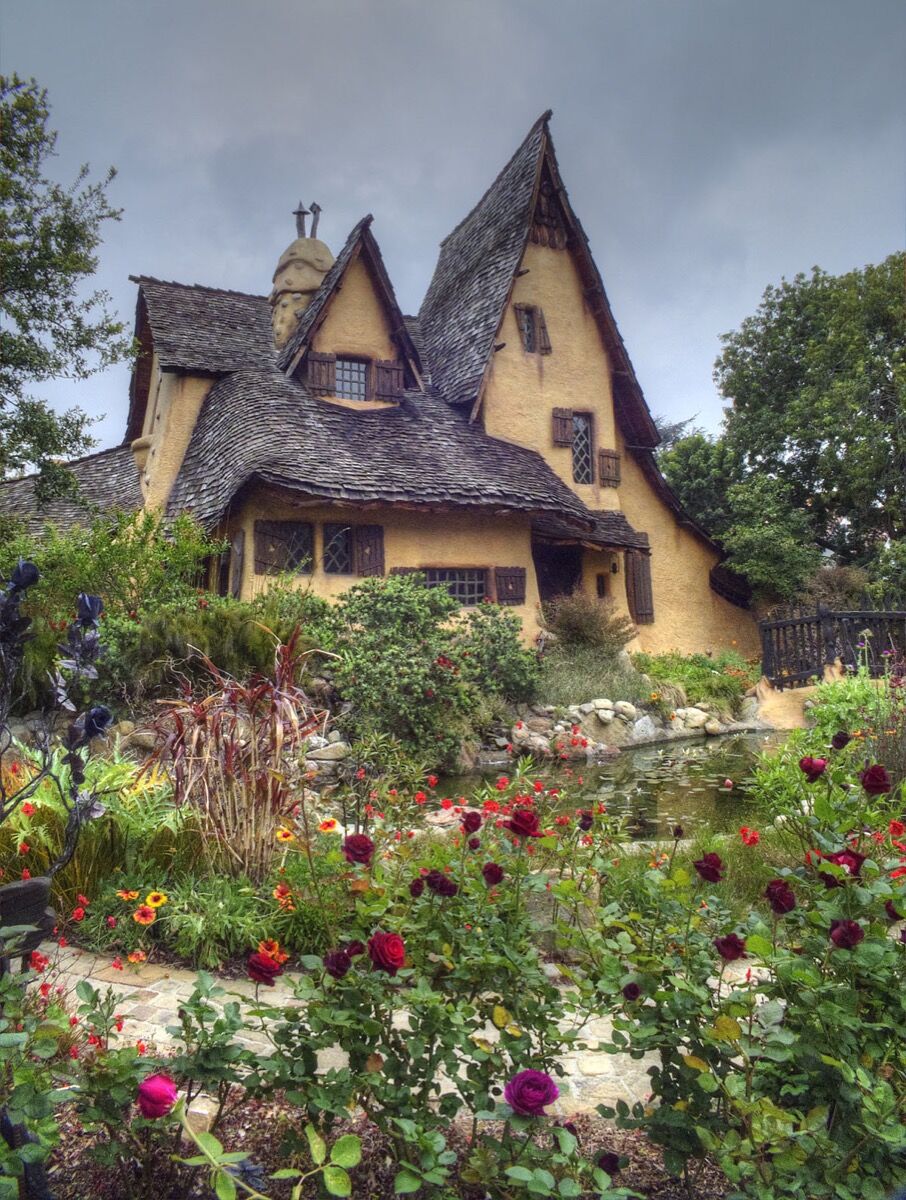 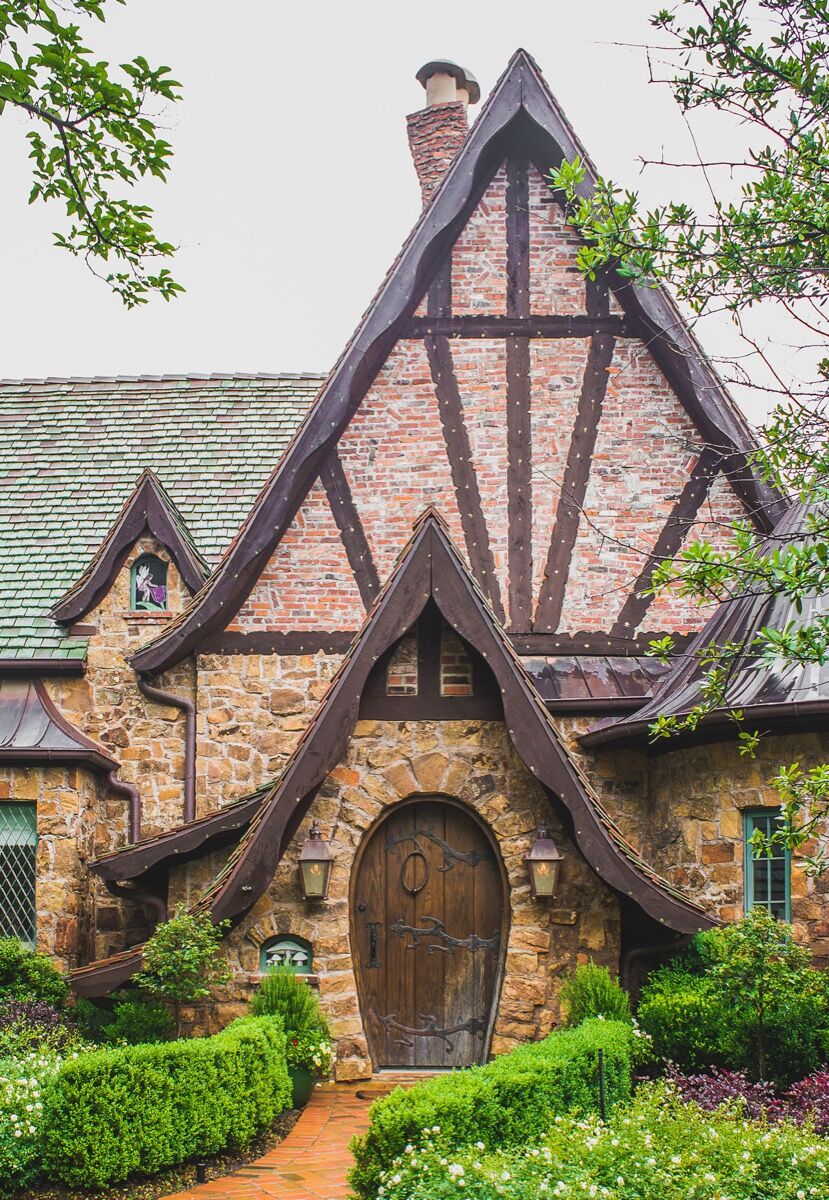 The pale orange facade of a distinct, diminutive home is speckled with tiny, crooked windows and distressed shutters, beneath a sweeping, pitched roof. It’s complete with a miniature garden, stained glass, and shingled turrets. The whole scene is whimsical, though oddly familiar—as though it were plucked from a fairytale, like Hansel and Gretel. And yet, this home, and several others like it, can be found in Los Angeles.
These playful residences—characterized by elements like swayback roofs, bowed walls, and an overall look of disrepair—began cropping up in L.A. after World War I, with the rise of the Hollywood film industry and a widespread fascination with medieval architecture. And thanks to architect and writer Arrol Gellner and photographer-writer Douglas Keister, the style of architecture has been given a fitting name: Storybook. Together, the pair quite literally wrote the book on the subject—Storybook Style: America’s Whimsical Homes of the 1920s (both 2001 and 2017 editions)—chronicling the rare, charming homes they describe as “the court jester among 1920s home styles.”
The Storybook style originated around the same time that a variety of advances in motion picture technology facilitated greater public access to film. The soon-to-be world-renowned Hollywood film industry flourished, and the studio lots of Warner Brothers, Paramount, and 20th Century Fox, among others, took hold of the ample land of Los Angeles. 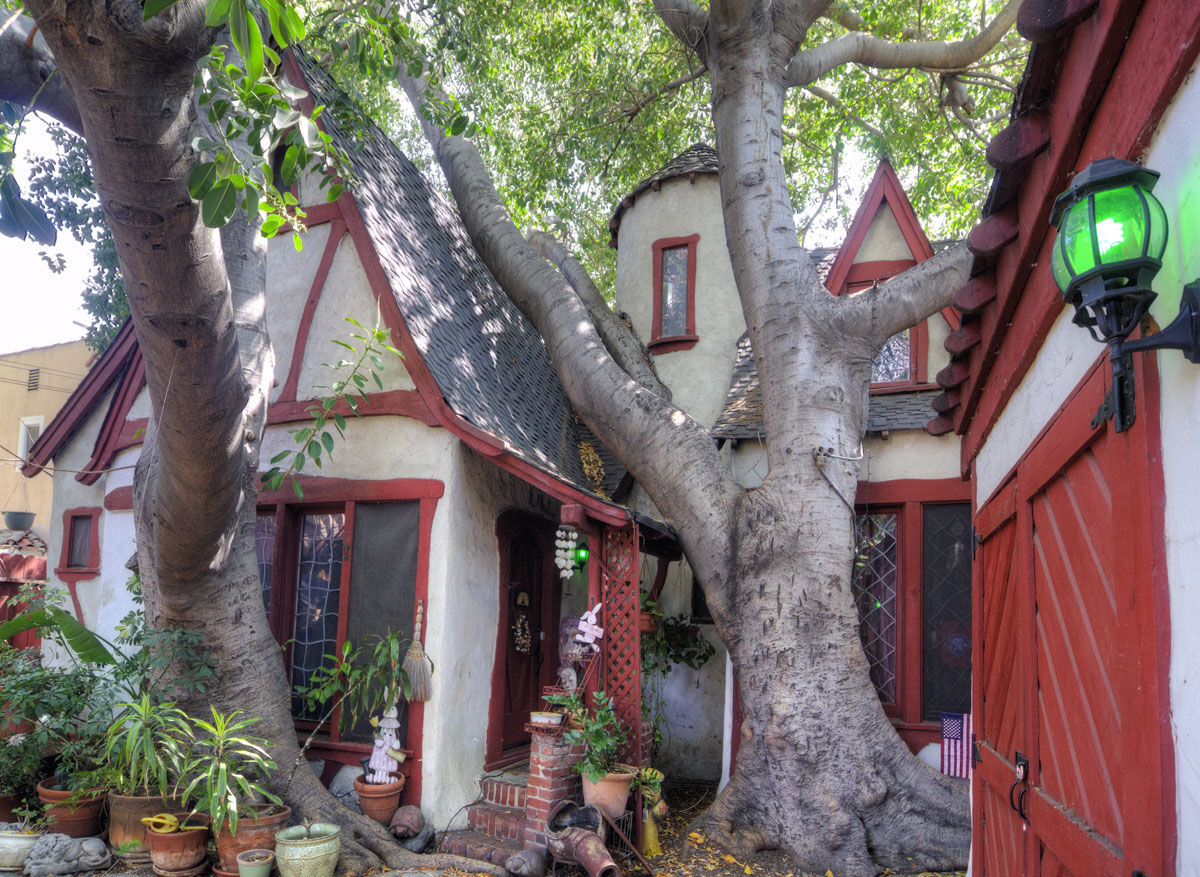 Along with the luxury and glamour of the L.A. lifestyle, Hollywood made every aspect of filmmaking famous—including the set designs that would inspire Storybook architecture. “The way the sets were built look exactly like how the Storybook houses were built later on,” Gellner explains, “it’s the same workmanship.” Certain techniques used on the homes, like artificial aging and intentional cracks and curves, came directly out of Hollywood set building methods.
The content of films also played a role in the Storybook style. At the time, filmmakers were looking to the events of World War I as fodder for their movies. They took cues from soldiers, who shared their harrowing war stories, but also recalled Europe’s medieval architecture—the quaint, rural structures seen from Flanders to France and Germany.
Those structures were part of the revival of medieval architecture and the rise of “picturesque” style in Europe that began in the late 18th century. Back then, this style returned due to architects rebelling against the standard Romantic Classical style, and a general nostalgia for handmade craftsmanship after the mass production of the Industrial Revolution. The most famous example is perhaps Marie Antoinette’s, the Hameau de la Reine in Versailles. A similar sentiment, and a departure from the more rigid Craftsman style architecture, ushered in the 20th-century heyday for revival architecture in the U.S.
Additionally, Gellner explains, the upsurge of revival “came because all of a sudden there was photography, which hadn’t existed before in magazines.” Photographs that appeared for the first time in magazines like National Geographic and American Architect and Building News would contribute to the soaring post-war popularity of European vernacular architecture in the U.S. Soon, French rural, Spanish revival, and medieval English styles would proliferate. 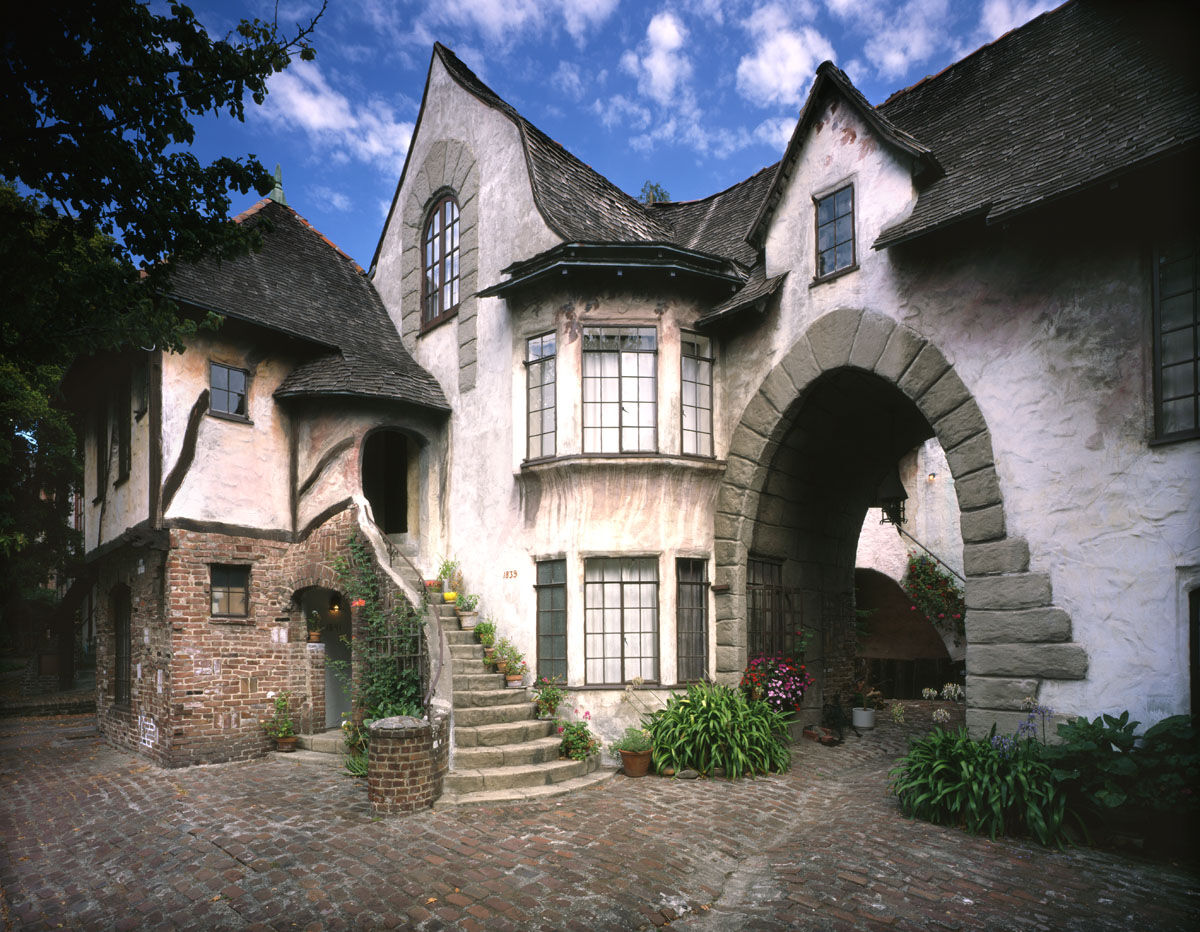 Advertisement
Whimsy, Gellner says, is “what sets the Storybook style apart from straight revival styles, which can be kind of stuffy.” The Storybook homes tend to include design elements imbued with a sense of humor or levity, ones that don’t necessarily add utility.
The first of such structures, Gellner notes, was originally built in 1921 by architect Harold “Harry” G. Oliver at the Willat Studio in Culver City. The somewhat maudlin, ginger-colored cottage, replete with an undulating “rolling roofscape” and “gable walls,” appeared in a number of silent films in the 1920s. It was later transplanted to Beverly Hills in 1926, and became a residence, now known as the “Witch’s House.”
Oliver’s style, Gellner explains, was “to make something so crazy it will draw people’s eye. To make them stop and look—that’s the genesis of it.” In fact, the Witch’s House, he writes in the book, “was reputed to have caused several traffic accidents due to double-takes by startled motorists.”
A similar sentiment went into determining the light-hearted name for this type of architecture. Gellner and Keister began by calling it Romance Revival, but “nobody would know what the hell we were talking about,” Gellner says with a laugh. However, after describing them as Disney-esque or Hansel and Gretel-style homes from a story book, “everybody instantly knew what we were talking about.” 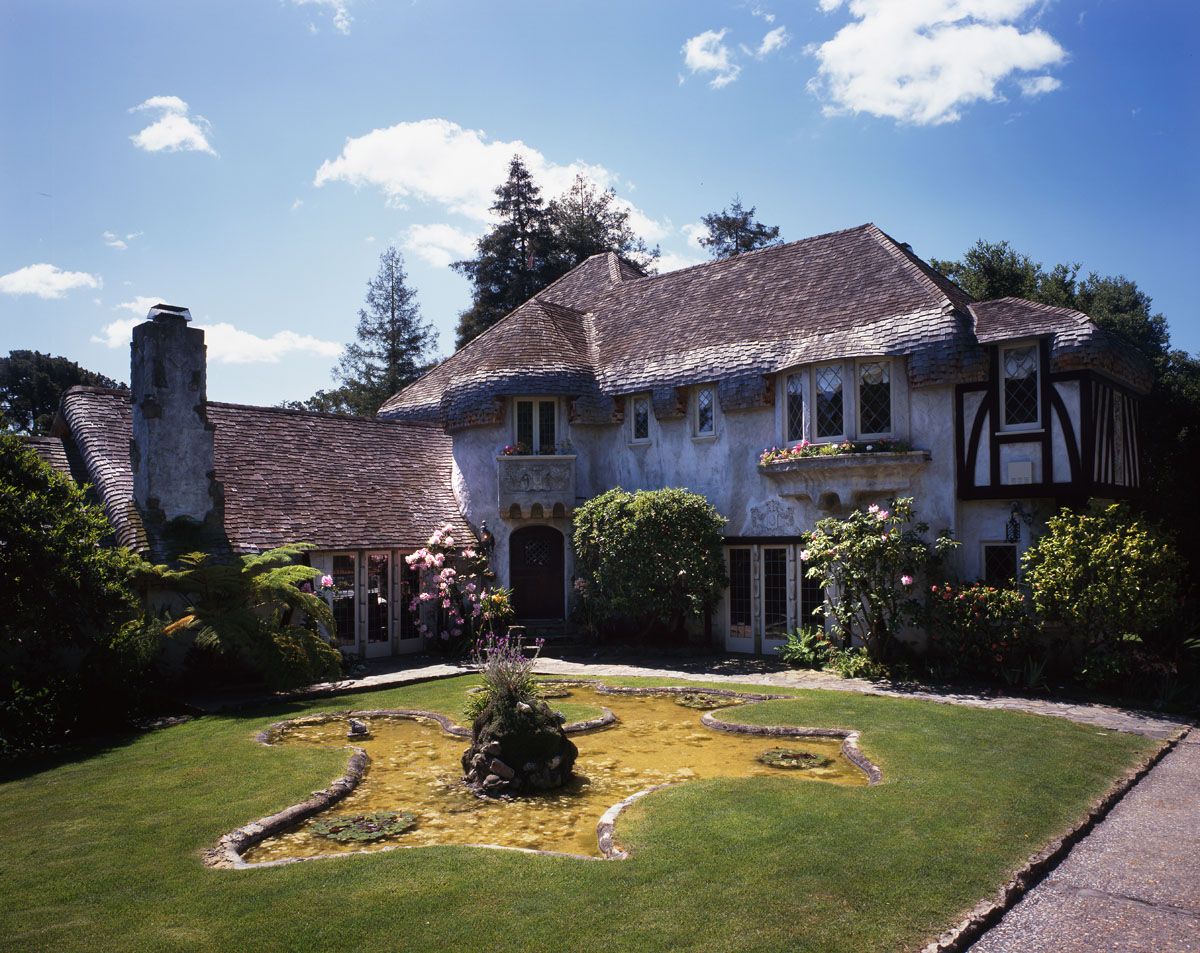 The eccentric style managed to travel beyond L.A., to Northern California (primarily in Berkeley and Oakland) and reportedly even to as far away as Florida and Washington, D.C. However, the Great Depression in the 1930s, as well as a more forward-thinking approach to architecture (exemplified by events like the 1939 World’s Fair in New York) spelled the end of the Storybook’s era. The homes’ fantastical style was matched by a surprisingly meticulous attention to detail, which proved expensive in terms of labor and materials. Keister and Gellner’s exhaustive, and often challenging search to document the homes has aimed to preserve those that remain.
An homage to history, architecture, and filmmaking with a playful edge, the Storybook home might best be understood as a creative art form in itself. “It’s really kind of a freehand-looking design,” Gellner explains, “the best of which look as if somebody sketched them without a straight edge.”
Ilana Herzig
Related Stories