Pacific Standard Time Spotlights the Arts and Crafts Made along the U.S.-Mexico Border 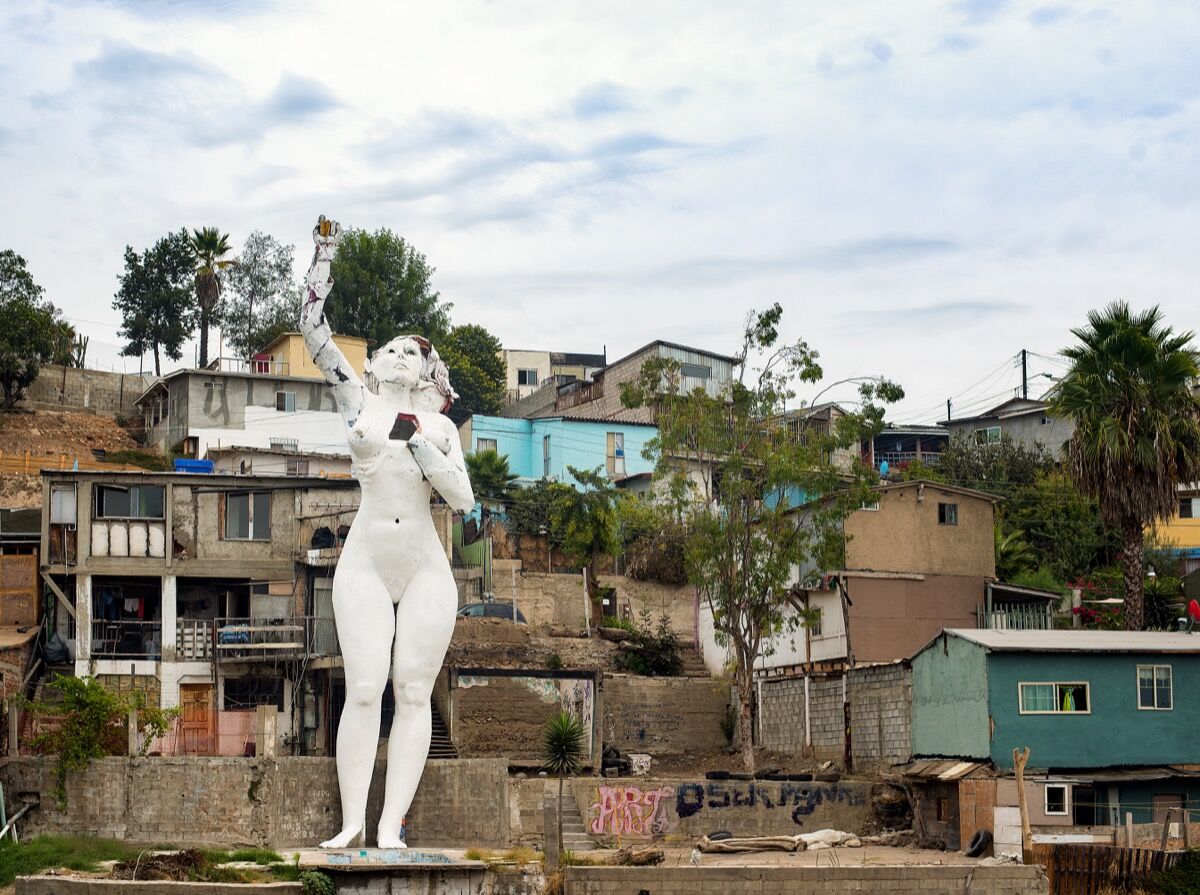 The Mexico-U.S. border is one of the most politicized borders in the world—but that’s been the case for almost 170 years, ever since the end of the U.S.-Mexican War/Guerra de Estados Unidos-México in 1848.
It is a place of nature and of abjection, of trade and of transgressions, or arrivals and departures. This is the way borders often are—the locations in between, in limbo. But beyond all the poetry of borders, they are just places, this one with six Mexican states on one side, and four U.S. states on the other. No more and no less.
A new show, “The US-Mexico Border: Place, Imagination, and Possibility,” the Craft & Folk Art Museum (CAFAM)’s contribution to “Pacific Standard Time: LA/LA”—a citywide examination of Latinx art and art from Latin America—takes a broad look at how art and design relate to, and use, the border’s geography and dense history.
Co-curated by retired Museum of Arts and Design chief curator Lowery Stokes Sims and Mexico City-based curator Ana Elena Mallet, the show is sober to the realities of those living in this fraught territory, but not necessarily pessimistic.
“There’s a lot of work now that talks about the tragedies on the border, but we’re really talking about what the border is as a hybrid identity space, and how people are coping with the politics of living there, both in terms of daily life, but also in terms of more conceptual ways of dealing with this cross-the-lines existence,” says Sims, who adds that she and Mallet looked to the El Paso-Juárez Transborder Biennial held in 2015 as a model. 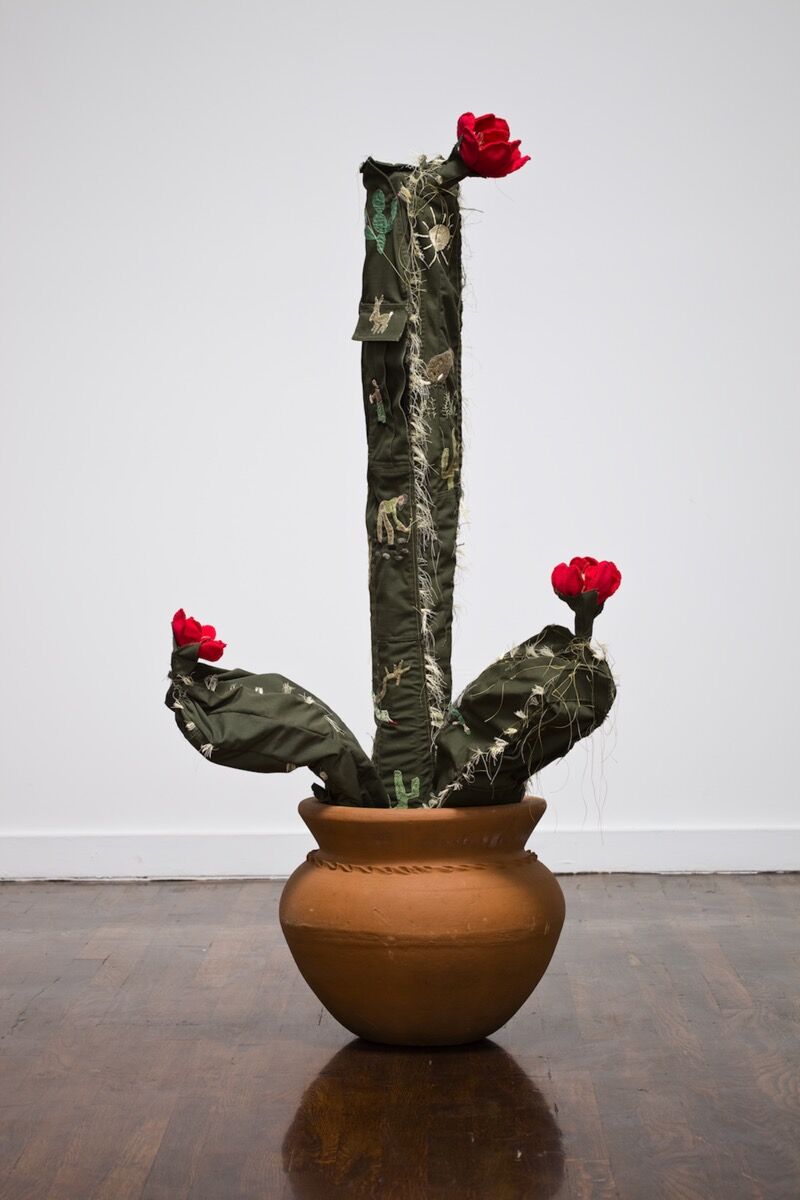 Margarita Cabrera in collaboration with Maria Lopez, Space in Between - Saguaro (Maria Lopez), 2010. Courtesy of the artist and Talley Dunn Gallery, Dallas. 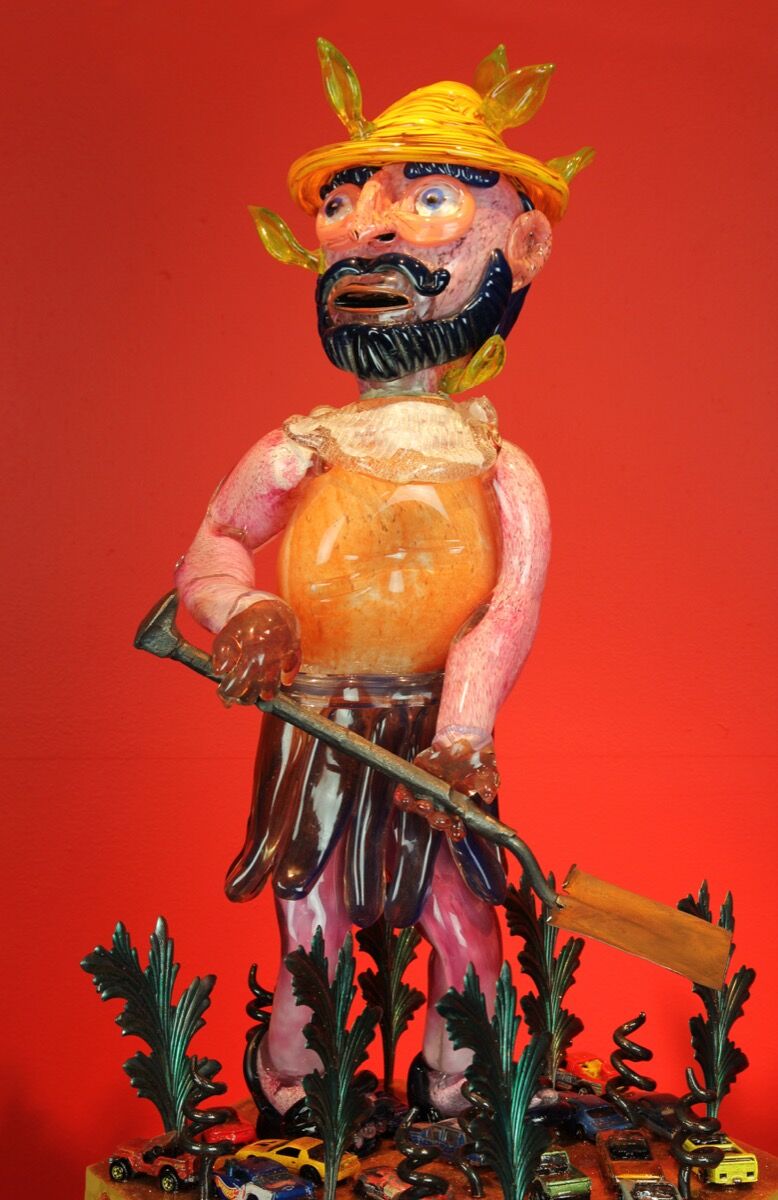 The show speaks to the story of the border from both sides, as told by artists, architects, and designers who have made the border a concern in their work, both directly and indirectly.
Visitors to CAFAM are greeted by a scaled-down version of Armando Muñoz García’s Tijuana III Millennium—better known as La Mona or “the doll”—the woman who looms over Tijuana, built by the self-taught sculptor for the 1989 centennial of Tijuana.
Behind the sculpture are cases filled with conceptual jewelry, like Haydeé Alonso’s Ni Una Más, a rubber neckpiece that is meant to feel suffocating, a reference to the maquiladora factory girls caught in the violence of Juárez—sometimes found sexually assaulted and strangled. (Maquiladora are the U.S.-owned, Mexican factories that exploit lower wages in the country, as well as the free trade agreement NAFTA.)
On the second floor, hanging from the ceiling, two pairs of pants feature the words “MIGRA” and “NO ICE” affixed to the waist areas. These are the work of Hector Dionicio Mendoza, an artist who immigrated to America in the early 1980s at the height of punk music, and the pants look very much like artifacts of East L.A. Chicano punk history.
The words refer to the raids from immigration officers that Mendoza’s family experienced in 1999 when living in the Salinas Valley of Central California, and are meant to function as armor against social injustice and labor abuse. 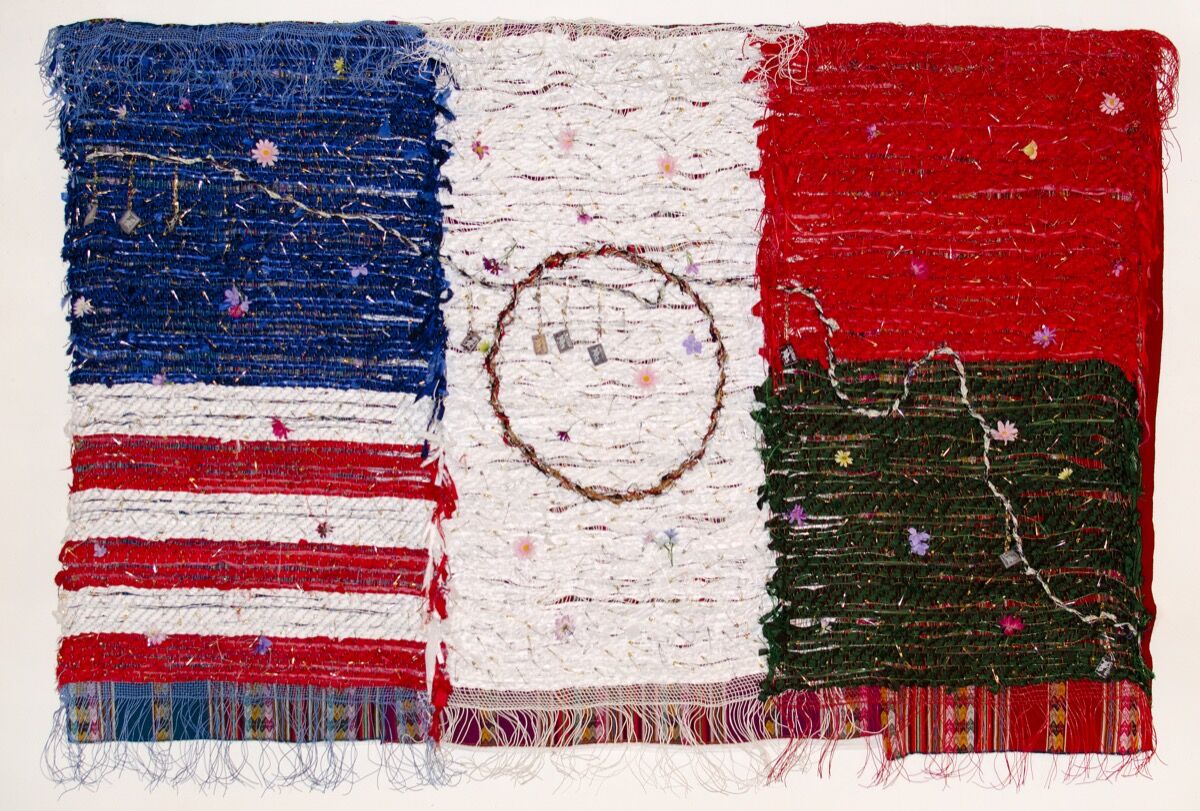 Consuelo Jiménez Underwood, Home of the Brave, 2013. Photo by Bill Apton. Courtesy of the artist.

Advertisement
Elsewhere in the exhibition,
Tanya Aguiñiga
’s Tierra (2014) contains soil the artist took from biographical sites—from under the bridge where her mentor committed suicide, from her grandmother’s house, from the beach where she experimented with drugs and had her first kiss, and from the ground along the U.S.-Mexican border that she crosses on a regular basis as a member of BAW/TAF (the Border Arts Workshop/Taller de Arte Fronterizo).
Aguiñiga has lined nylon and vinyl tubes with the soil, creating a “woven rug” floor piece that also includes notable phrases relating to the locations (“HE JUMPED”; “PINK SMOKE”; “PADDED DRUGS”). These are Aguiñiga’s bittersweet memories of the personal events that took place along the border.
On the third floor,
Ana Serrano
’s striking, earnest Cartonlandia (2007) is the clear centerpiece: a human-tall mass of cardboard boxes painted to depict the daily lives of hill-dwellers, like those who live on the outskirts of towns like Tijuana or L.A. It pulsates with energy. Life is vibrant in the hills, Serrano’s paint suggests. And the doors are sometimes open, sometimes closed. 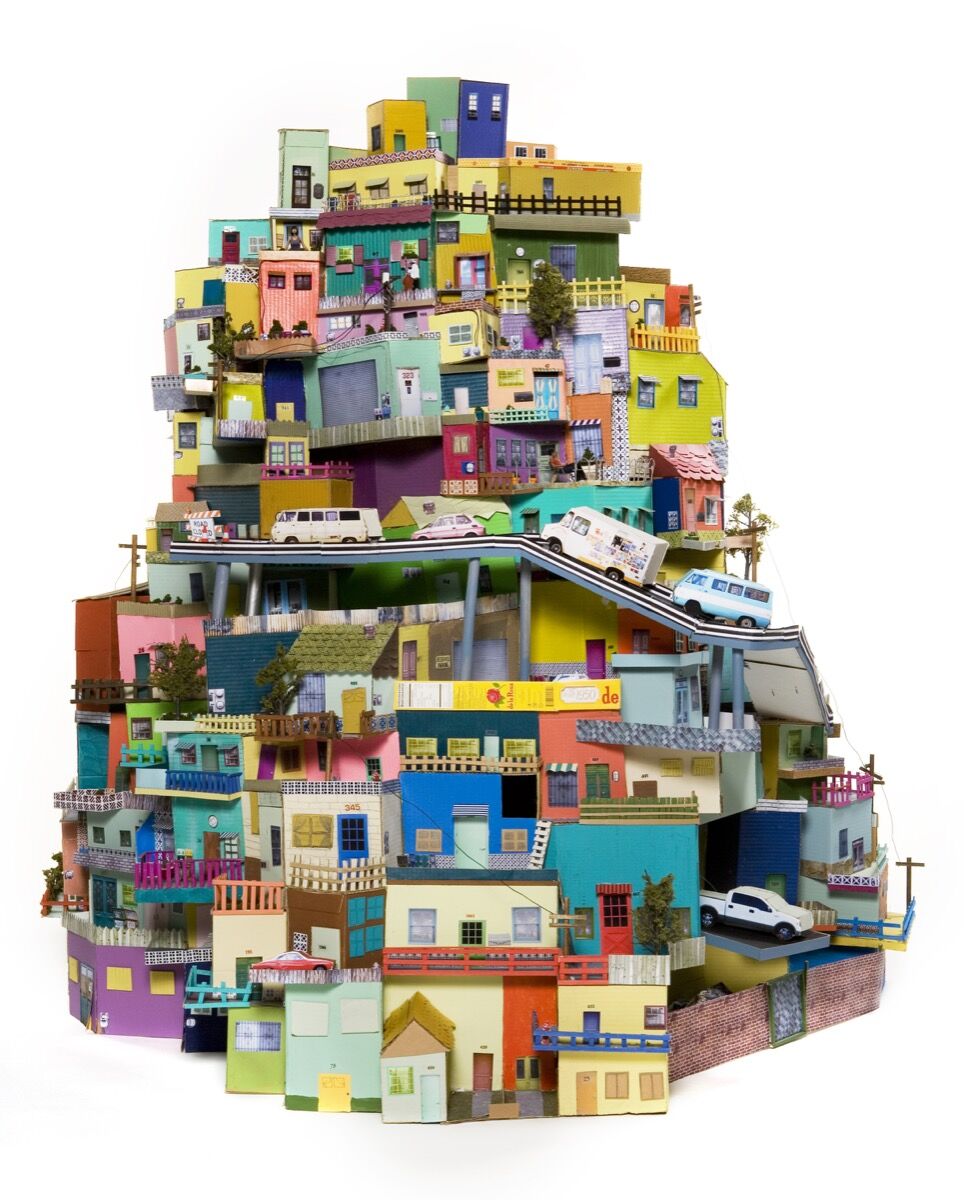 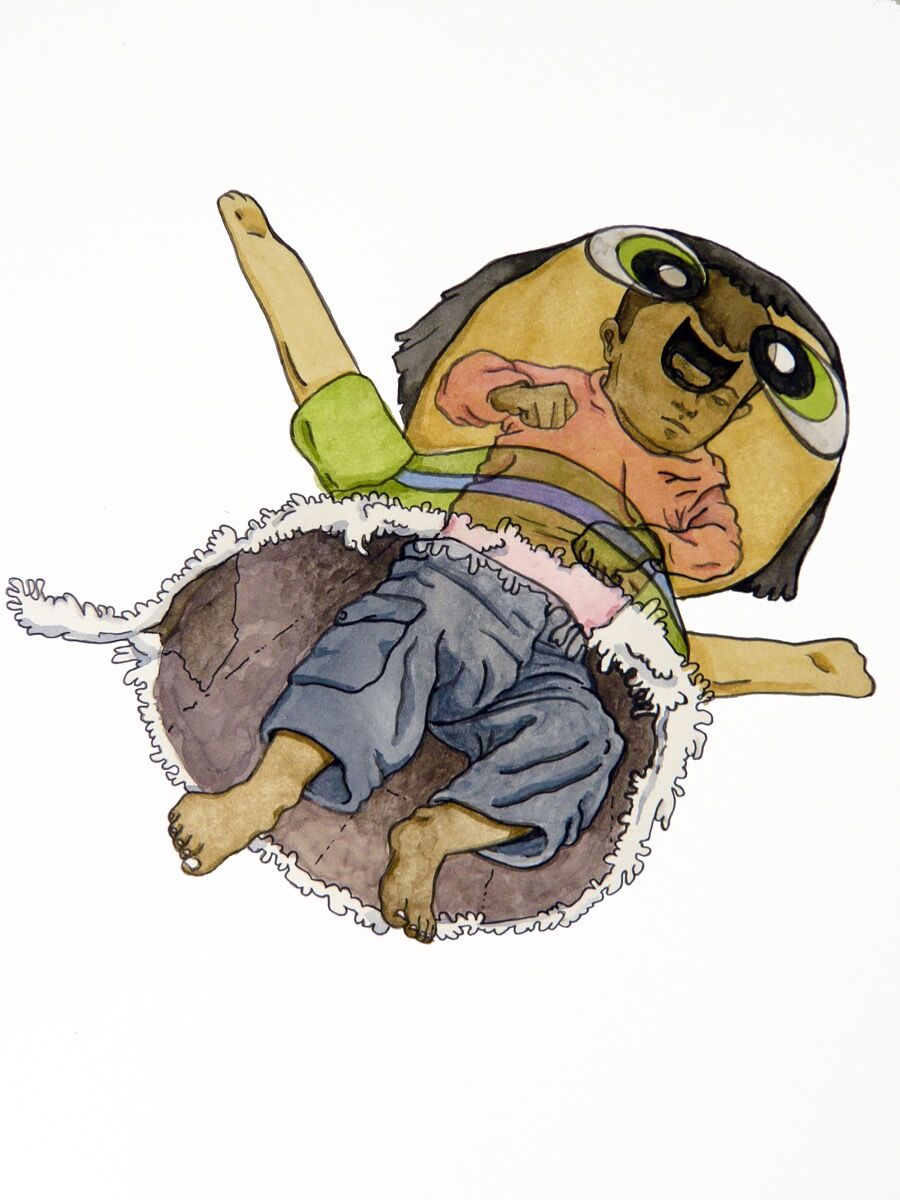 Meanwhile,
Rael San Fratello
(a studio made up of artist-architect-designers Virginia San Fratello and Ronald Rael) reimagines the imposing border fence as a place of possibility. They have made prints and snow-globe-sized miniature sculptures that act as proposals to turn the border into a community center of sorts—a bike path, a volleyball court, a teeter-totter, a confessional.
Though these miniatures were made in 2013–14 as a response to the Secure Fence Act that Congress passed in 2006 (for the building of a double-layer fence across the border), they feel more urgent in the face of a U.S. presidential administration touting a 55-foot-high border wall and taking a hardline approach to immigration.
Beyond artists who look directly at the border in their work, artisans who make crafts in the borderlands are also represented. L.A.-born artist
Pilar Agüero-Esparza
, who presents Mexican huarache sandals in the shape of swimming flippers or in popping colors, and Texas-born artist
Adrian Esparza
, who has deconstructed a colorful serape blanket into an elaborate geometrical hanging on the wall, both recognize the traditions of production that take place along the border.
Signs speckle the whole exhibition, alluding to different issues surrounding this often loaded territory and that surface throughout the work on display—“I FEEL DOUBLE/ME SIENTO DOBLE” points to a Mexican-American double consciousness, while “BELIE THE REALITY OF LIFE/CREA LA REALIDAD DE LA VIDA” evokes the stereotypes that plague this region. Sims says these loose categories emerged naturally as the works came together. 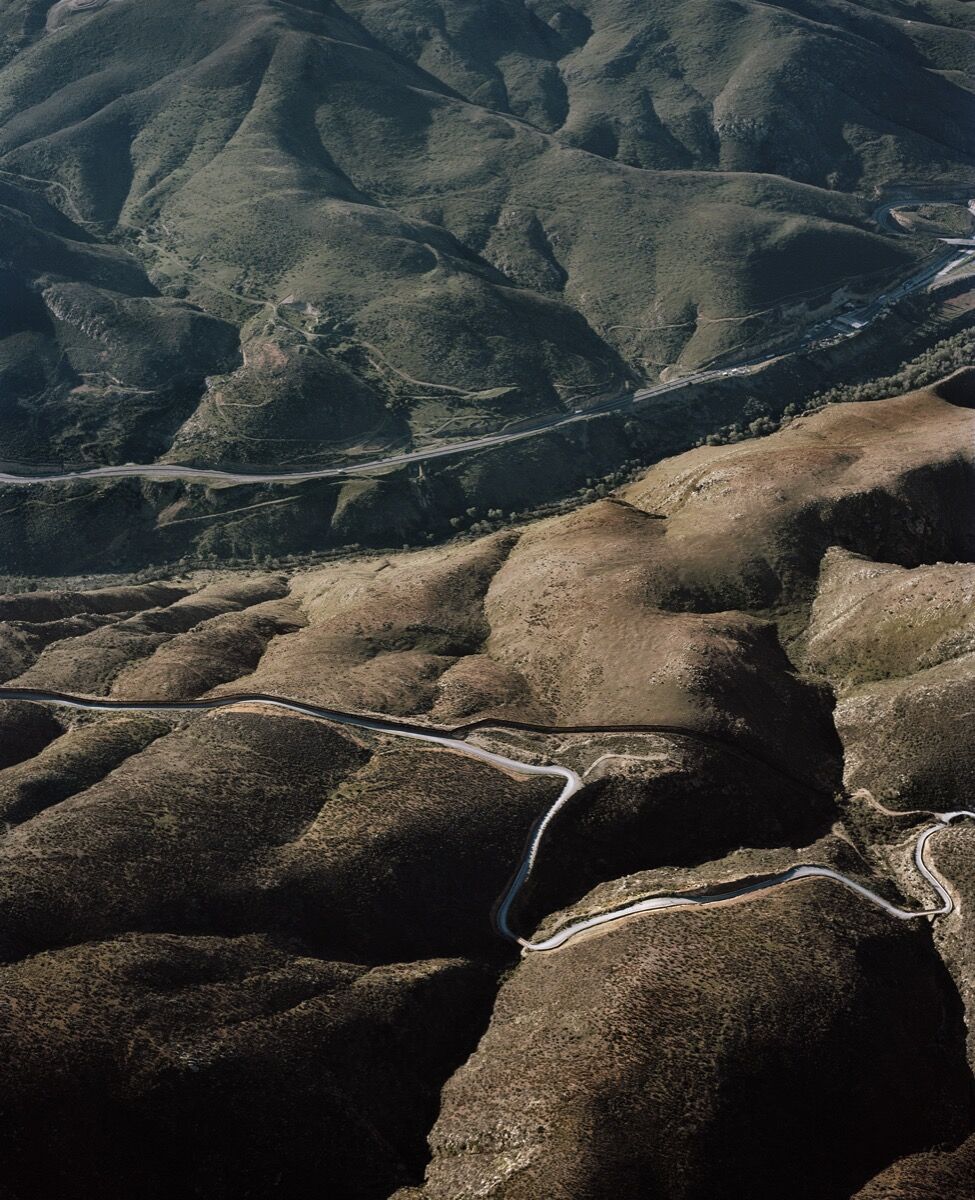 “We allowed the architects and the designers and the craftspeople to identify and help us figure out what the main themes were,” says Sims. “We’re looking at the border as a site of imagination, imagining what a border identity might be. And also critiquing the notion of the wall through proposals to make it infrastructure and create avenues of communication for families that remain separated by the fence.”
She hits at the real lesson here, which is that the U.S.-Mexico border is its own ecosystem, fed by millions of people and their stories. With so many different people in such a vast expanse of land, there is an immeasurable variety of ways to understand life along the border.
It’s been that way for a long time, and will continue that way for the unforeseen future. The challenge is to emphasize humanity within that often contentious and always multifarious landscape—the work in “The US-Mexico Border” succeeds in finding and paying homage to that humanity.
Maxwell Williams
Related Stories 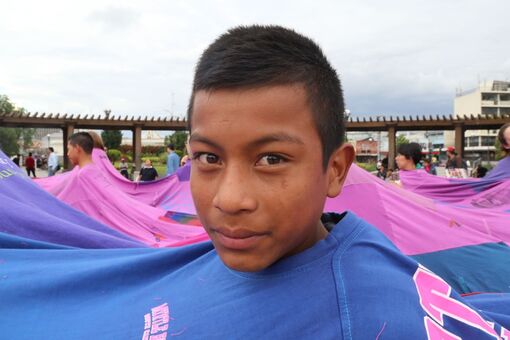