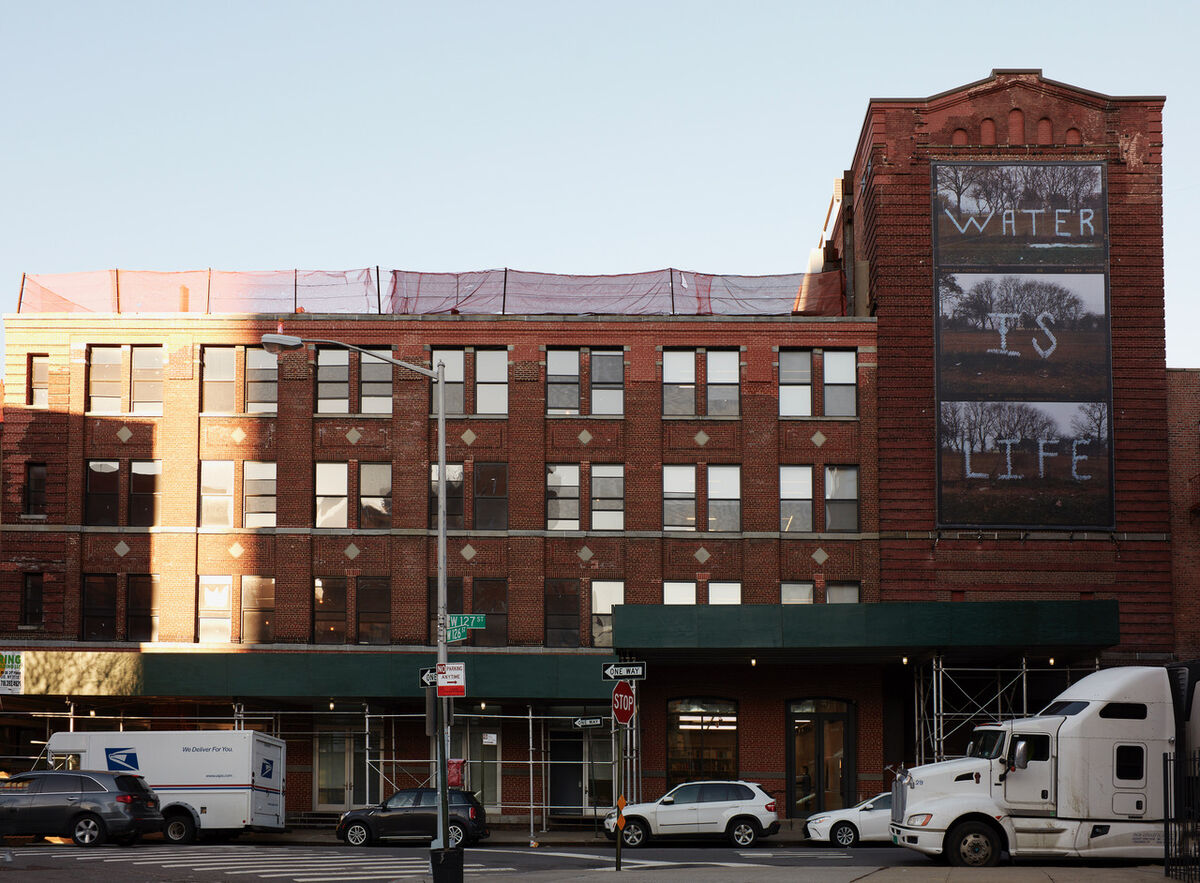 Since the age of 17—when she shot her first photograph, using a 35mm camera, of her mother at a bar in her  hometown of Braddock, Pennsylvania—
LaToya Ruby Frazier
has been documenting  the dignity, hope, and perseverance of working-class black life in the midst of crisis and decline. A new exhibition at Gavin Brown’s Enterprise in Harlem weaves together three bodies of work (“The Notion of Family,” “Flint Is Family,” and “A Pilgrimage To Noah Purifoy’s Desert Art Museum”) that engage with pressing social issues—from the fundamental need for clean water, to the way racism can inform economics, the environment, and healthcare. Frazier’s images of the American heartland’s black working class pay witness to deep devastation and tiny, pyrrhic triumphs.
Hanging on the red brick facade of the gallery is a triptych of three large-scale photographs taken last November by the MacArthur “Genius” grant-winning photographer and storyteller. They show a fence standing in a Flint, Michigan, field with three words spelled out in clear white lettering: “WATER IS LIFE.” The billboard-style installation, entitled A Message in Nestle Water Bottles from Shea Cobb, Amber Hasan, Macana Roxie and LaToya Ruby Frazier at Sussex Drive and West Pierson Road, Flint MI (2017–18) is a way of speaking of that small, post-industrial city’s ongoing water crisis.
4 Images
View Slideshow 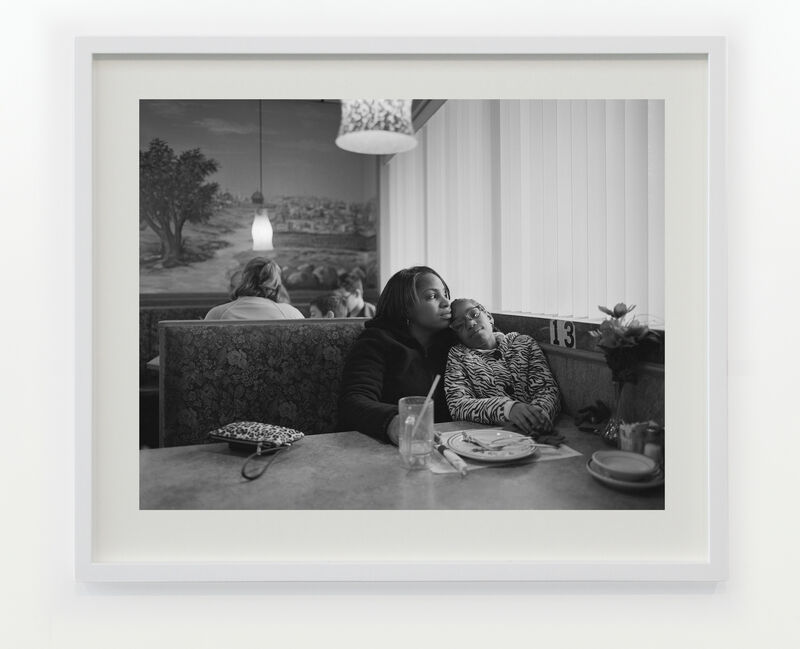 “If you want to learn the history about a place, all you have to do is look at its inhabitants,” Frazier told Artsy, standing surrounded by her “Flint is Family” (2016–17) series inside the gallery. The images were shot on assignment for Elle magazine, and were inspired both by the artist’s college mentor, Kathe Kowalski—a firm believer in long-term social documentary work—and the mid-century reportage of
Gordon Parks
, namely his 1967 photo essay, “A Harlem Family.”
“Whenever I’m making a portrait,” says Frazier, and its subjects are “looking back at me, showing their dignity and pride and humanity, they are a marker on the timeline of history.”
The artist’s pictures of protest, landscapes, and people in this first series follow the African-American Flint resident Shea Cobb, tracing her family and community and how they’re affected by by the town’s health crisis (the result of cost-cutting measures implemented by the state government in 2014, which forced the city to turn to the polluted Flint River as a public water supply). The broader emergency is reflected in intimate, domestic moments—like Shea brushing Zion’s teeth with bottled water in her bathroom (2016), a snapshot of a daughter, mouth agape as her mother turns a private moment of humiliation into one of protection, care, and survival. 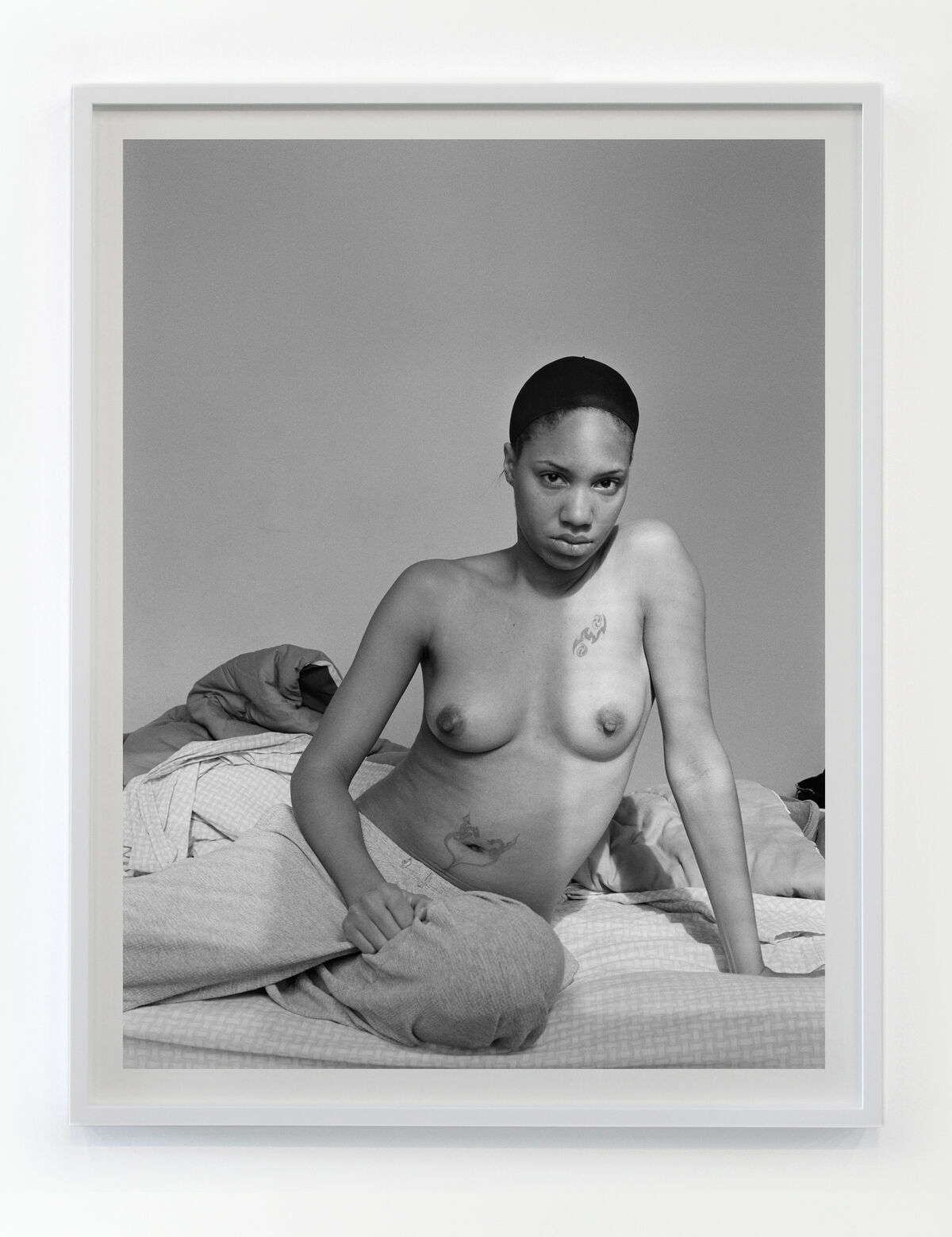 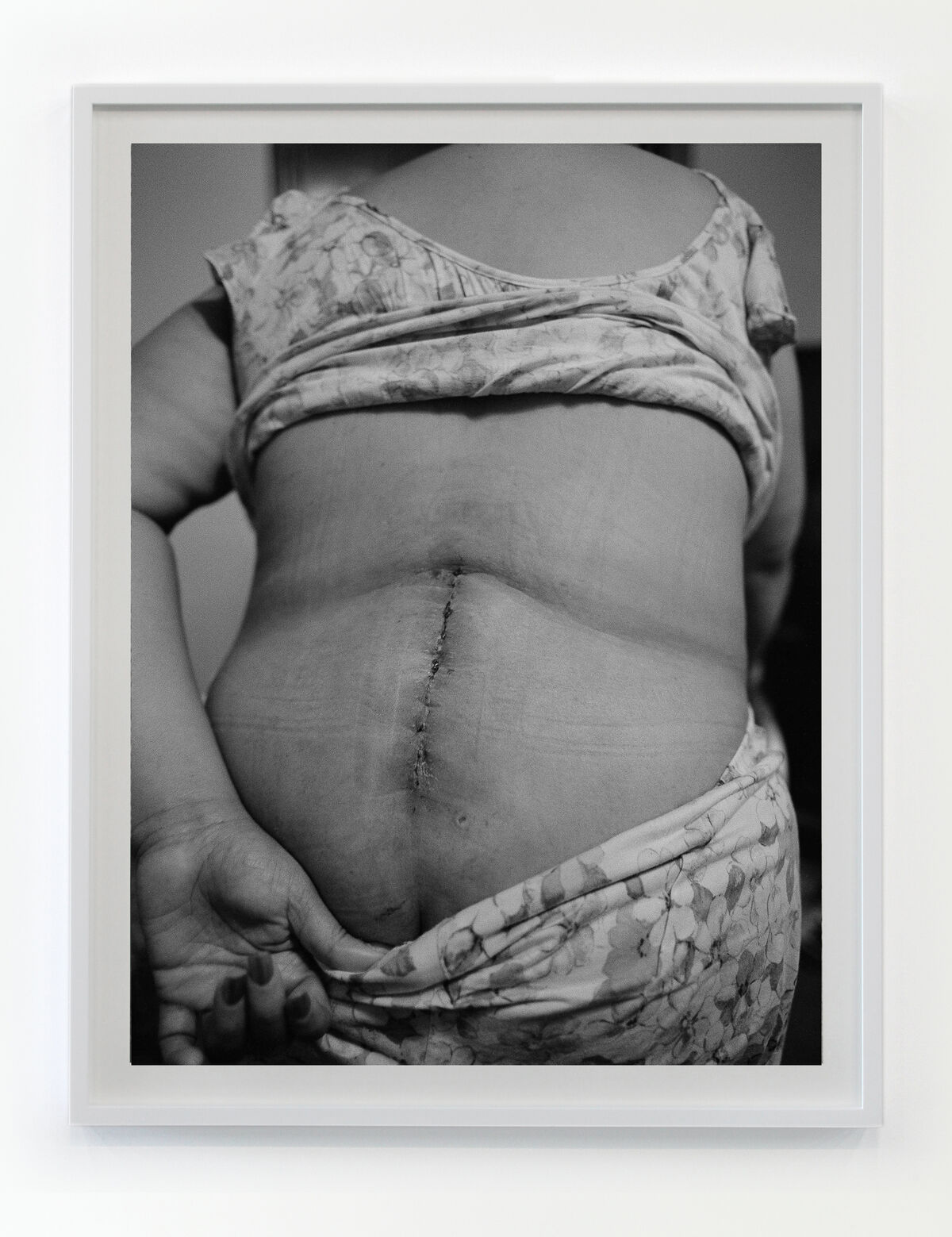 Advertisement
All of Frazier’s photographs are accompanied by written recollections, penned by the artist, that allow her subjects to vocalize their own realities. “‘Mom is this Flint water, can we drink this cause it came out the faucet?,’” Frazier records Zion asking her mother in the aforementioned picture’s extended caption. “‘Shea hates the fact that her daughter is aware. ‘That’s a horrible reality,’ [she says.] ‘We don’t ingest the water on any level. We waterfall little bits of bottled water at a time, brush, repeat, waterfall and gargle.’…They laugh together to throw off the situation.”
Her seminal series “The Notion of Family,” which she began in 2001, tracks the toll that the environmental and economic decimation of blue-collar towns (as well as the so-called “War on Drugs”) has had on her own family in Braddock. A key focus of the images is the mental and physical health of the Frazier women. “We are talking about that landscape and how the environmental toxicity and pollutants and systemic racism have impacted our bodies as three generations of women who were born and raised in that town and who are very present in that town—even though the media says that its a ghost town of undesirables,” Frazier explains.  (Men do make appearances, as with the artist’s portraits of her grandfather, a former steel worker who died in 2003, having reliably voted Republican for much of his life.) The photographer often uses health as a motif in images like Self Portrait (Lupus Attack) and Mom’s Spine Surgery (both 2008), speaking of what it means to be black and endure poverty and racism—and also astutely nodding to how the University of Pittsburgh Medical Center has replaced the United States Steel Corporation as the economic anchor of Pittsburgh and its suburb of Braddock.
Pittsburgh, Frazier says, is “a city, once bound to steel, that’s now tied completely to a nonprofit healthcare corporation that doesn’t pay taxes to the city and that doesn’t want its workers to unionize.” That hospital corporation, in 2010, demolished the medical center in Braddock. “My family sits at the very intersection of this reality,” says Frazier. “Not only were we destroyed because of the closure of the factories, we were destroyed because of the war on drugs and now to add insult to injury, you are taking the hospitals?” Frazier’s most recent portrait in the series, on view here, is Momme (2018), a picture of the profile of her mother’s face with the artist behind her, partially obscured. The image, which Frazier refers to as a “double portrait,” was taken a year after her mother’s recent spinal surgery. It’s a very different kind of image than the first one they took together in 2008 (also titled Momme), a close-up of Frazier and her mother, posed similarly looking a decade younger, wearing black stocking caps over their hair. The new photograph embraces how mother and daughter have transformed their lives by staring down inequality, with all their humanity and dignity, regardless of  circumstances. “The gift” represented in the 2018 portrait, explains the artist, “is you tried to kill us three times but we are still here.”
The ongoing photographs in “The Notion of Family” also have a renewed urgency in 2018—these are images of the very depressed towns that President Trump has promised to revive. Yet when Trump speaks of the working class in America, the labor he highlights is that performed by white people; as Ta-Nehisi Coates noted last October in his searing essay “The First White President,” it’s part of a process of making “working class” synonymous with whiteness. “My work is here to tell you and remind you and bring visibility to the fact that the working class is a very diverse population in this country,” Frazier counters. “It’s black, white, Latino, and immigrant.”
Frazier is concerned not only about the kind of stories artists can tell—and how to spotlight what has been erased—but about who is telling these stories. What would the 1936 documentary image Migrant Mother look like, she wonders, if its subject (the poverty-stricken Florence Owens Thompson) had made the image herself, rather than posing for
Dorothea Lange
? In searching for an answer, Frazier has developed an aesthetic that mixes the Maysles Brothers’ distinct style of cinéma vérité (capturing subjects “as they are”) and the documentary work of W.P.A. photographers like Lange, who made her mark by shooting the Great Depression. She does this by telling the story from within—making collaborative images that invite her family and other subjects into the process. 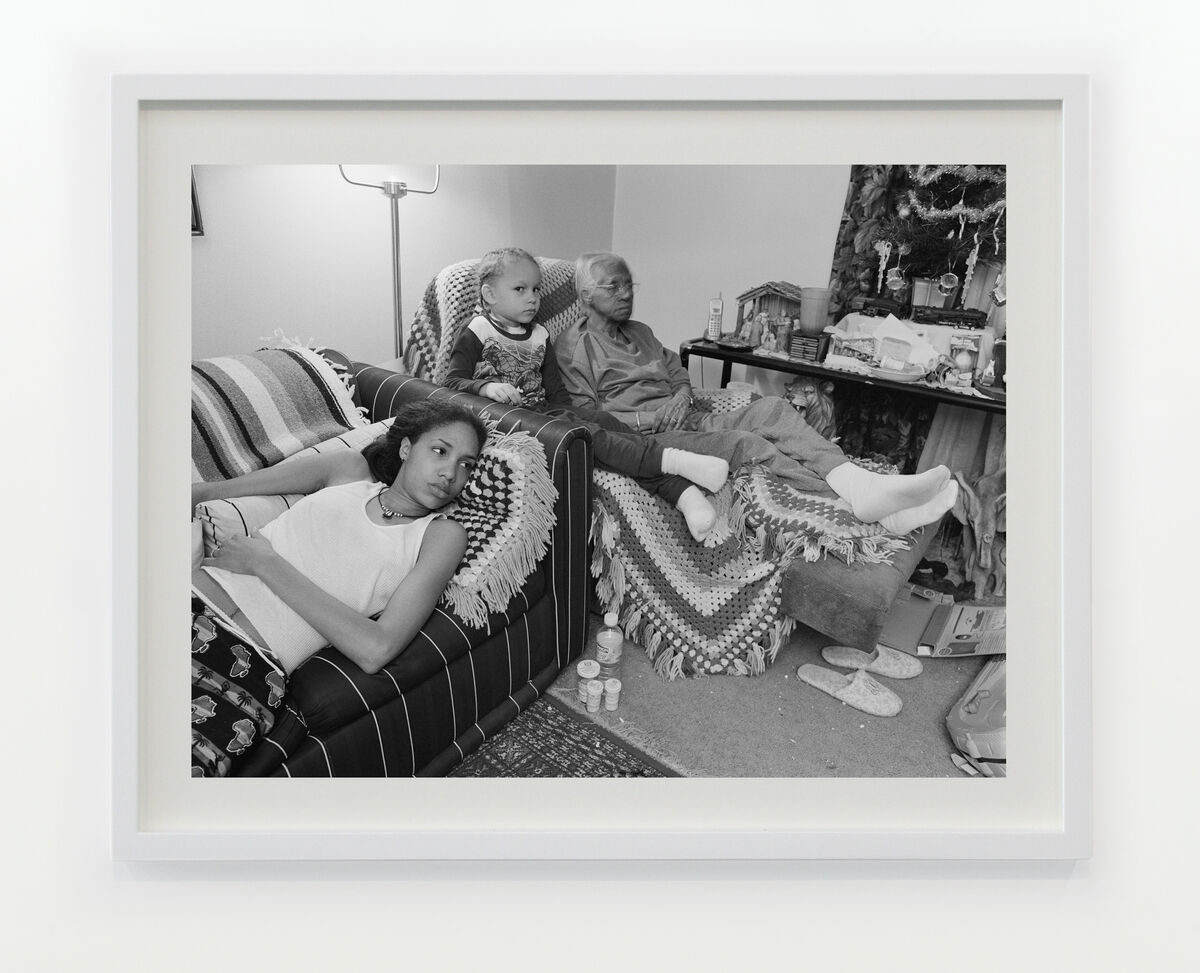 “My grandmother, mother, and I are authoring those images,” says Frazier, who taught her relatives to use a camera for “The Notion of Family.” The women shot the series together— over holidays, after overcoming illness—and after developing the photographs would have ongoing conversations about representation, visibility, and how to mark history with their own bodies. “I would take the contact sheets home and my mother would say, ‘look I wanted you to take this photograph of me because that’s who I was then, it’s not who I am now. The moment you clicked the shutter on that photograph it was no longer me,’” recalls the artist.
“I’m a citizen-artist advocating for other peoples’ voices and visibility and for their perspective on all the stories that are being told,” Frazier says. “I like to be on the ground with families and be able to make work puts forth this whole other idea of humanity that trumps all of the bias, prejudice, and racism.”
Antwaun Sargent
Related Stories

20 Artists for the Trump Era 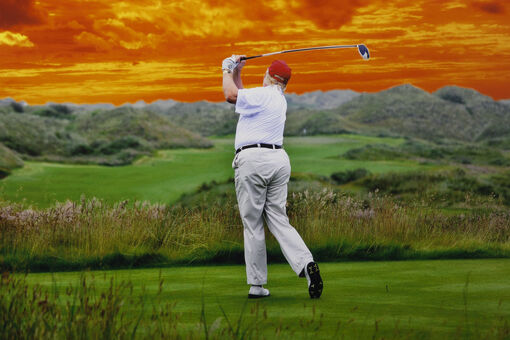