Laurel Nakadate Used Photoshop to Rewrite Her Family’s Past 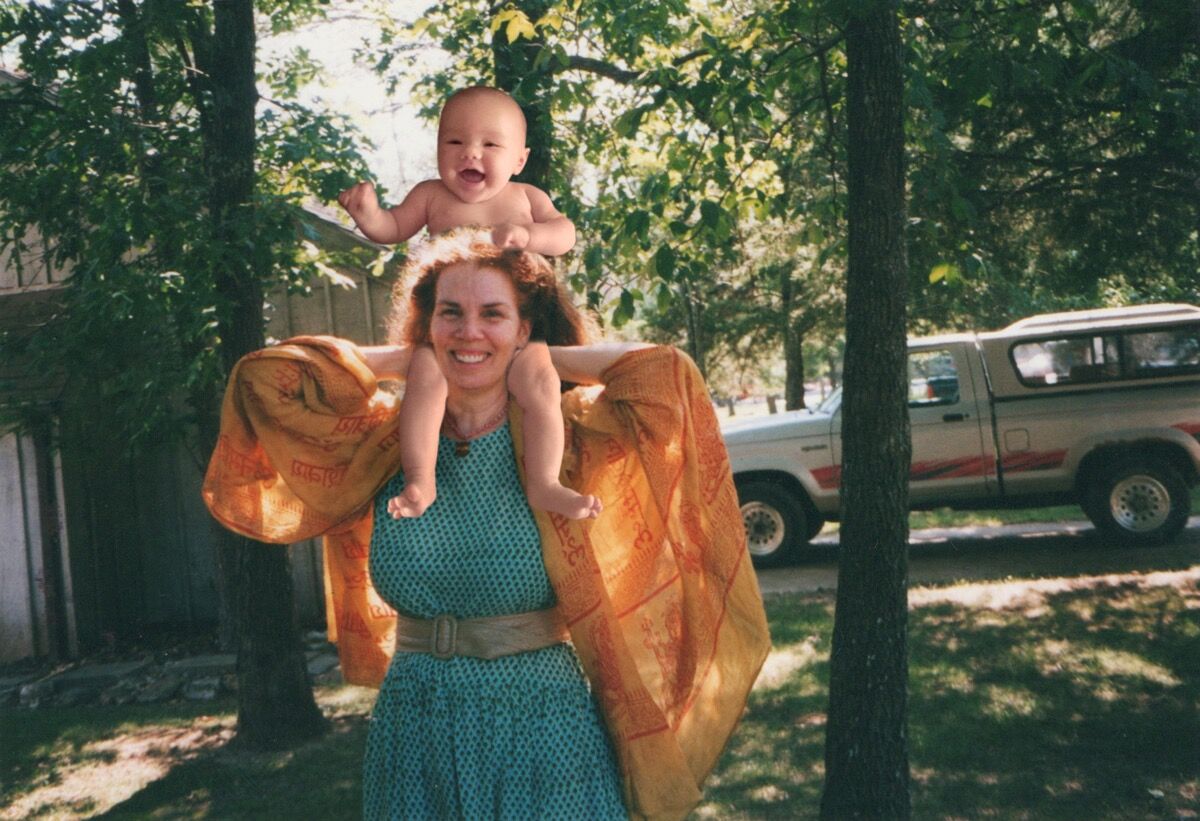 From Back to the Future to Star Trek, popular time-travel narratives suggest a human desire to return to, and ultimately alter, the past. Such stories promote the empowering idea that individuals can affect history; they appeal to our fantasies of someday getting our own do-over—that we could take back a hurtful remark or, say, increase voter turnout in Michigan and Wisconsin. At Leslie Tonkonow Artworks + Projects, artist
Laurel Nakadate
takes a deeply personal approach to the theme.
For her new series “The Kingdom,” the artist revises history via photograph, altering 34 pictures of her recently deceased mother, Mary. Nakadate hired technicians that she found on the internet to Photoshop images of her newborn son, Theo, into her mother’s arms. The series spans Mary’s life, from her childhood to her marriage (when she was just 16) through a period of illness before her 2016 death. Mary never got to meet the baby, passing away just months after he was born. 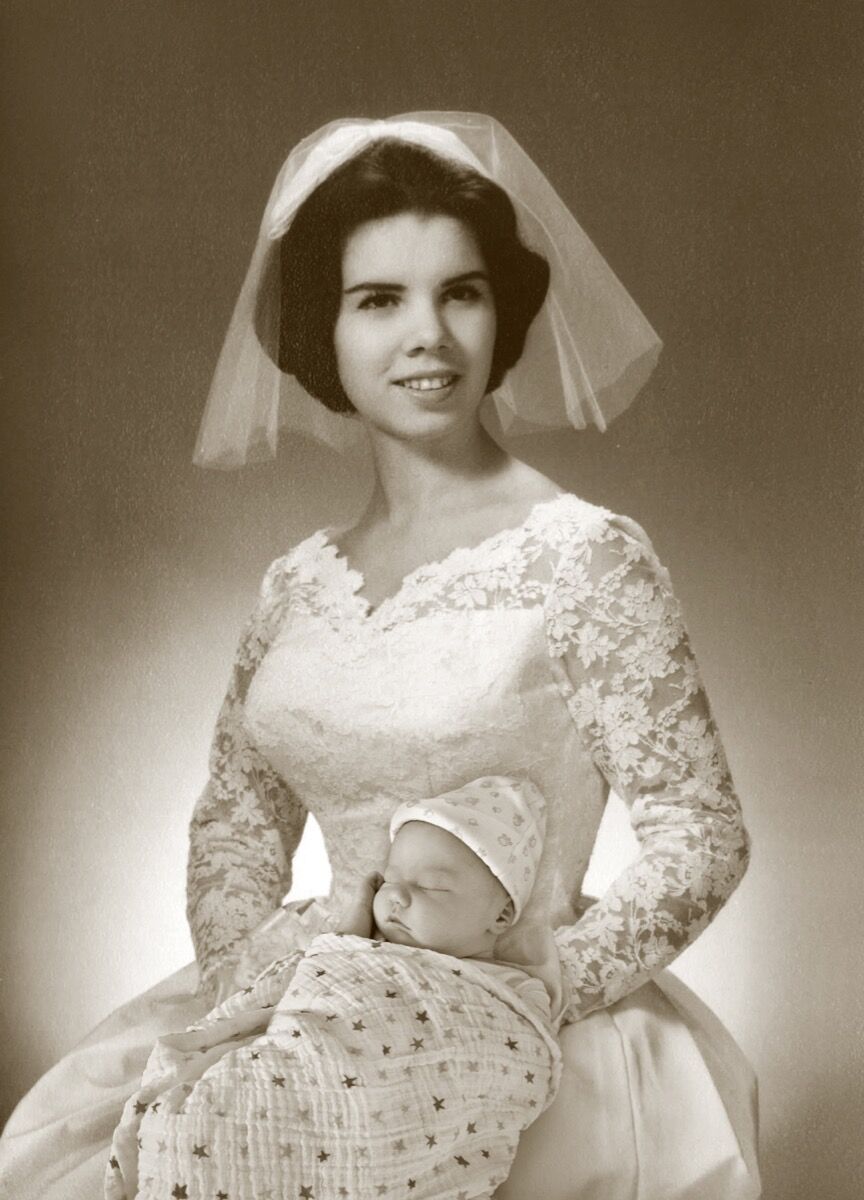 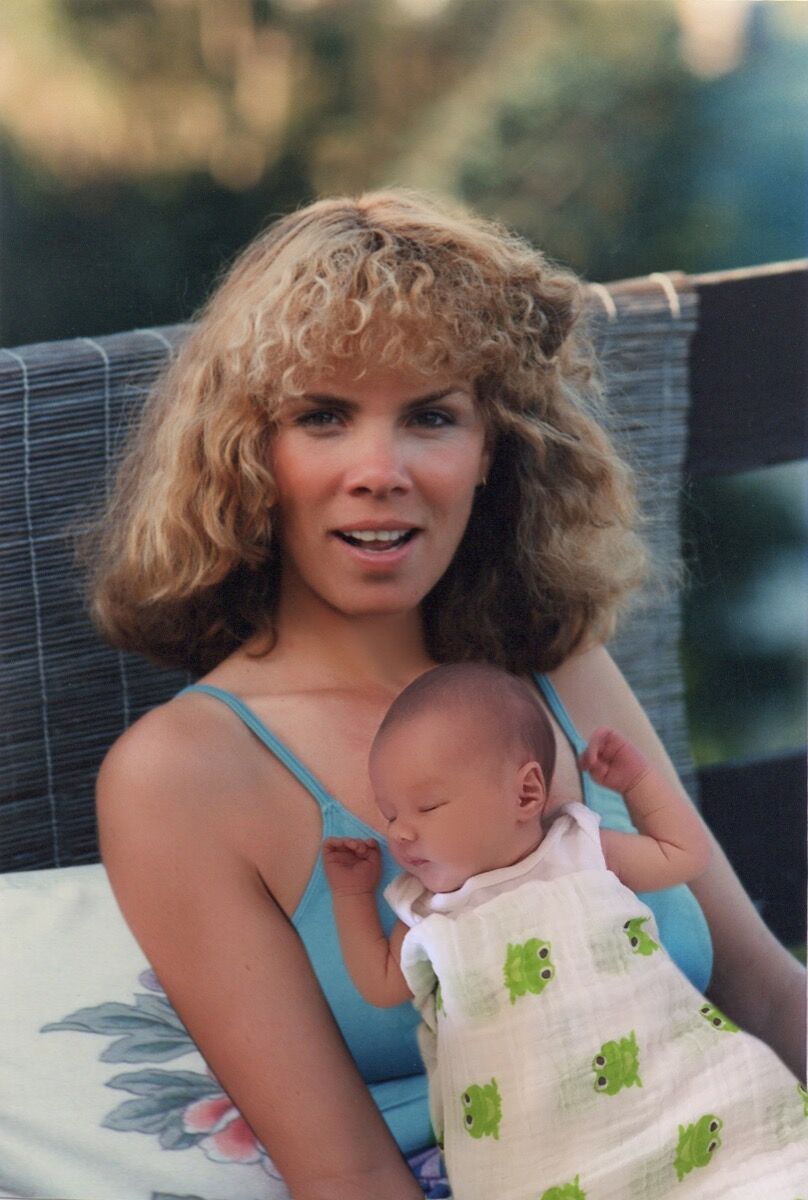 Nakadate offered the technicians minimal instruction and never met any of them face-to-face. This process infuses the series with randomness and chance, which the artist connects to her own experience. “Suffering and loss teach us that we’re not responsible for how things go,” she said. In one shot, Mary reclines in a teal top; Theo rests on her chest, swaddled in a frog-patterned blanket. The technician thinned Mary’s arms, employing Photoshop to its usual ends: personal enhancement. Despite the emotional gravity of the series, there’s a humorous element in such idiosyncrasy—the least of Nakadate’s troubles is what her mother’s arms looked like many decades ago.
In another photograph, the technicians accidentally placed Theo in Nakadate’s grandmother’s arms, not her mother’s. The technological failure, Nakadate explains, mirrors an emotional failure in coping with death. “At first,” she says, “I felt like I was getting away with something by making the photos.” She felt as though she was cheating at first. Yet no artwork would ultimately allow her to get what she wanted most: the opportunity to watch her mother hold her son.
Nakadate explains that “The Kingdom” grew out of her “Relations” series, for which she photographed strangers who shared her mother’s DNA. Nakadate herself received the results for her mother’s genetic sample and was able to connect with her distant relatives via the testing website, which linked genealogical matches. She traveled the country, shooting them at night. “That was all about my mother’s DNA, and so is this show,” the artist said. She began “Relations” hoping to find a family member on her mother’s side who’d been given up for adoption as a baby. (Nakadate finally reconnected with him in the spring of 2016.) 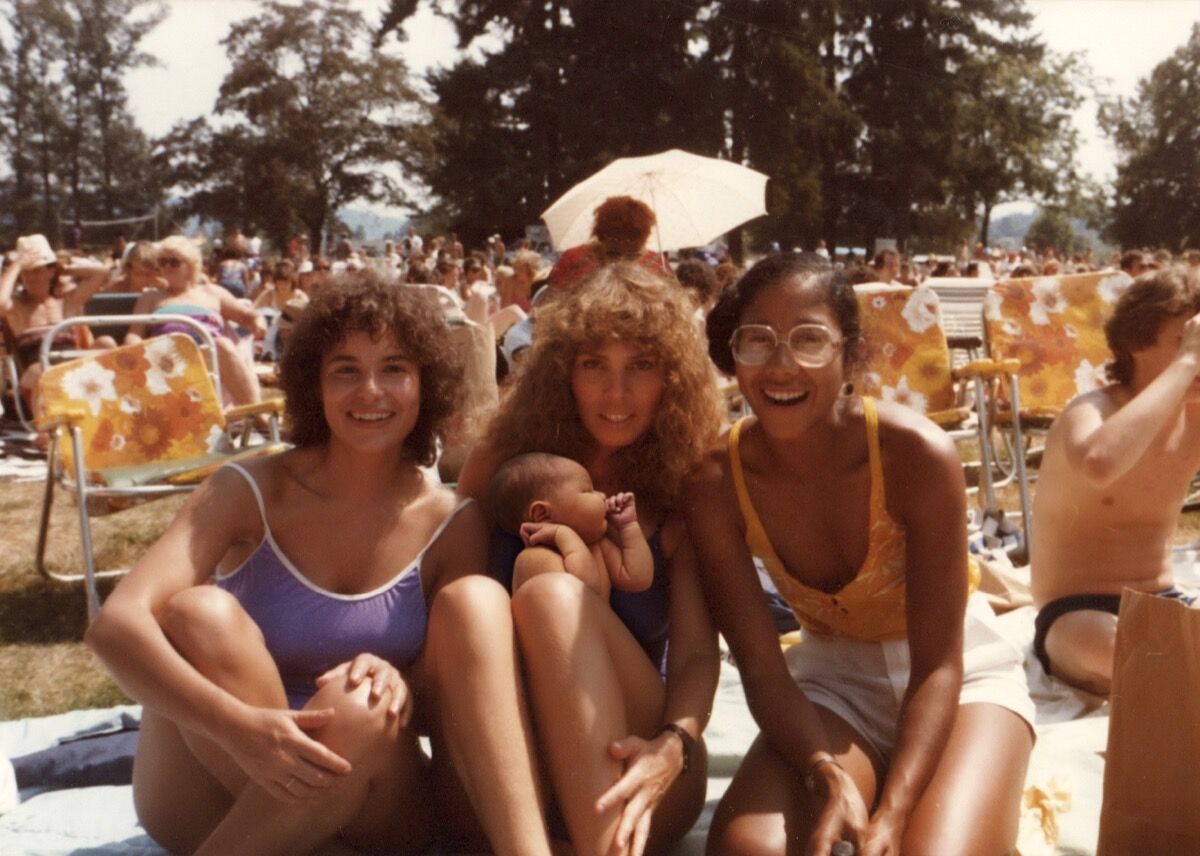 Advertisement
Nakadate shot to early fame after graduating from Yale’s MFA program in 2001. A decade later, MoMA PS1 honored her with a survey show. The exhibition included two of her feature films, Stay the Same Never Change (2009) and The Wolf Knife (2010), both of which explore the sexuality of adolescent females.  In her early work, Nakadate often used her own body in videos and pictures both unsettling and titillating. When men hit on the young artist in New Haven, she invited herself to their homes to capture their time together. In some videos, they celebrate her contrived birthday. In others, they dance to Britney Spears, or she poses as a half-dressed model as the men draw her. These works hinge on other people’s desires, while “The Kingdom” focuses on her own. If her portrayal of longing was once salacious and anticipatory, it’s become elegiac and impossible to fulfill.
“There’s a great deal of consistency and a very interesting shift from looking outward toward people who she doesn’t know, to going inward, exploring her most intimate relationships,” says gallerist Leslie Tonkonow, although she also acknowledges that “strangers are still a part of her concerns and her new work, using the internet and social media.” In 2011, the same year as the MoMA PS1 show, Tonkonow exhibited one of Nakadate’s first series that really looked inward. In “365 Days: A Catalogue of Tears,” the artist photographed herself before, during, and after crying every day for a year. The work served as a contrast to the portrayals of happiness (many contrived) that she witnessed on social media.
Mounted in chronological order, the photographs that comprise “The Kingdom” line two adjacent gallery walls. The exhibition space, painted a dark gray, creates an appropriate sense of drama and solemnity. On the opposite wall, visitors can pick up the receiver in an old pay phone situated inside a lighted privacy hood. They’ll hear voicemails that Mary left on her daughter’s phone, telling her she loves her. “It was a way for my mother to have her voice in the show,” Nakadate explained. Entitled City of Stars (2018), the interactive work offers an intimate experience, another way for the artist to attempt to defy history and bring back the dead. 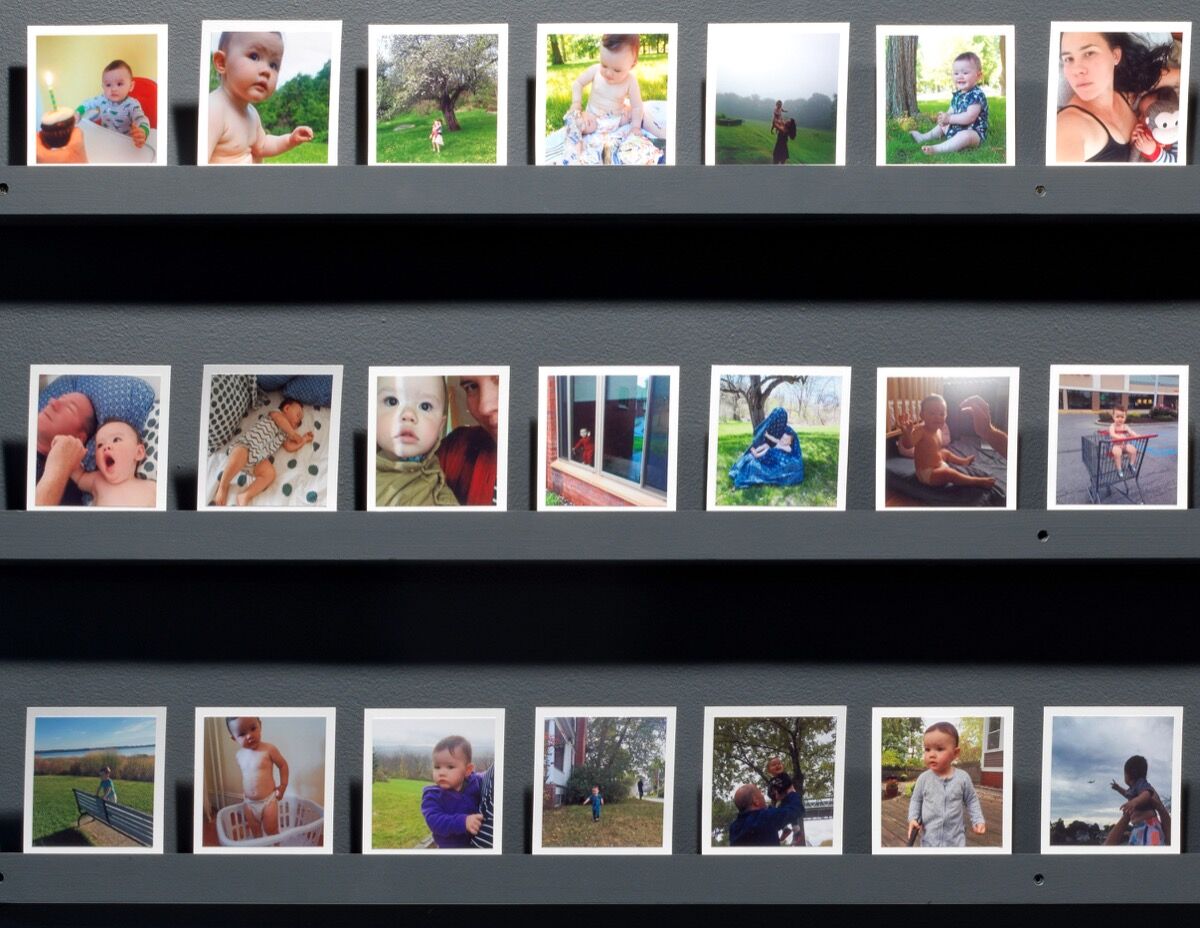 While most of the show turns a granular focus on Nakadate’s immediate family, her “Executive Order 9066” series (2018) also engages with American politics at large—albeit through an autobiographical filter. Following President Franklin Roosevelt’s eponymous order from 1942, Nakadate’s Japanese-American father entered an internment camp for 180 days from 1944 to 1945, when he was a one-year-old. To mirror this same stage of life, the artist took pictures of her own son during his first year. We witness Theo on a bridge in the arms of his father, writer Rick Moody, or dressed as a bunny in a pumpkin patch. The baby’s freedom contrasts with his grandfather’s invisible, unshown confinement. The series is both a reminder of America’s past cruelties and a subtle suggestion of how contemporary prejudices could easily lead to similar injustices.
“I did have misgivings about putting my family in my work,” admitted Nakadate, who doesn’t plan to use her son going forward. “But he’s an infant, and to separate him from the story would be dishonest.” It’s a risky proposition, she believes, to be this sincere. (Notably, she does veer, once, from seriousness in this show: In one video, Nakadate sways side to side while wearing a Chewbacca mask and a black “TWERKING” t-shirt, her nine-months pregnant stomach very much exposed.) 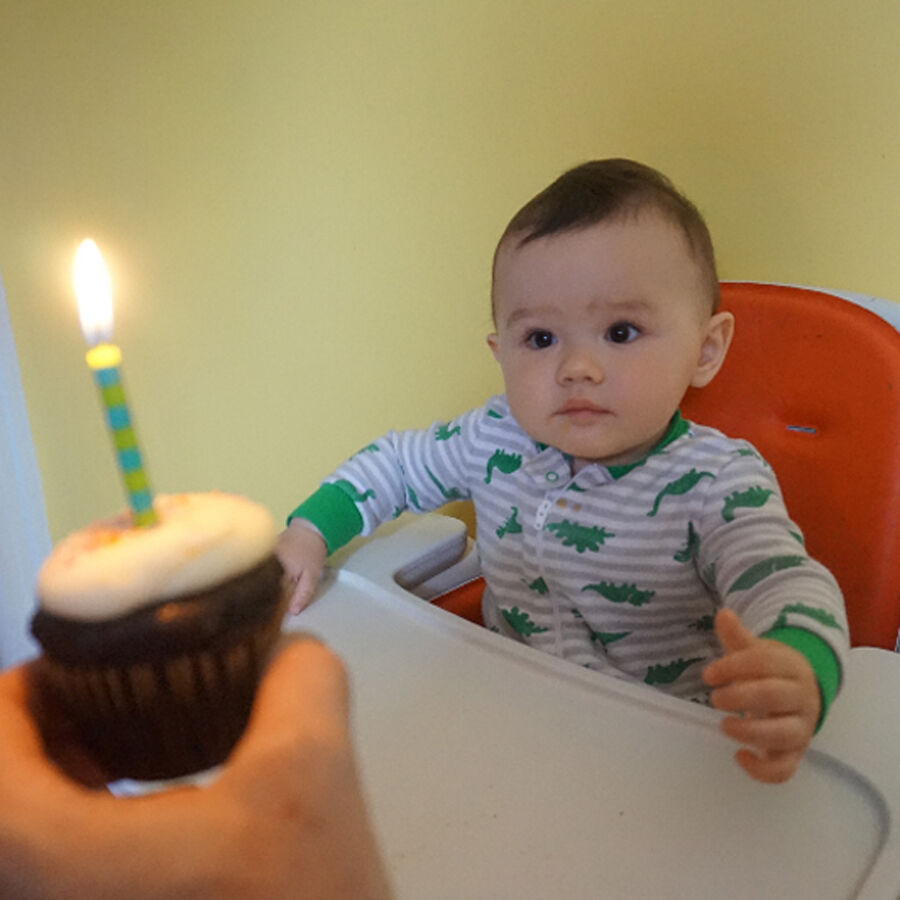 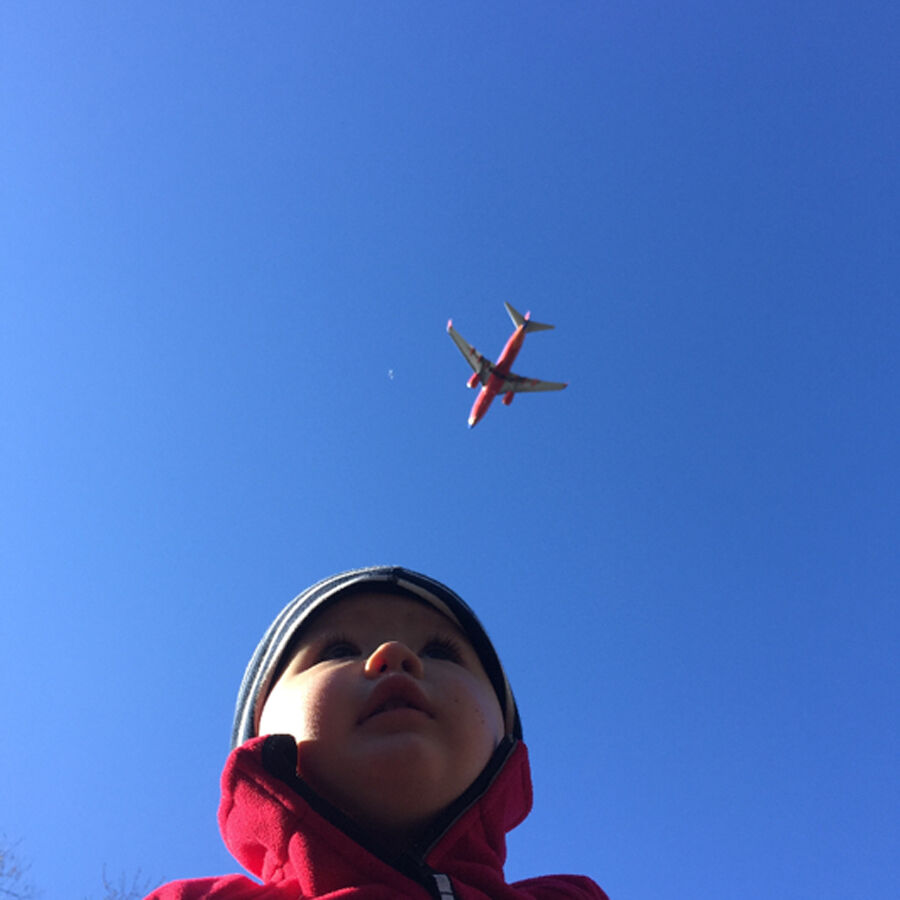 Nakadate feels vulnerable revealing her life, and those closest to her, in this way. Next, she may return to film, though she acknowledges the new struggle of finding the hours to work: Her artmaking schedule revolves around Theo’s naps. Indeed, motherhood has altered her own sense of time.
Alina Cohen
Related Stories