Thanks to two intrepid documentarians, you can watch
John Cage
demonstrating his method for making Soup Des Jours, a hearty concoction that he kept simmering on the stove, sometimes for weeks, adding new ingredients each day;
Jonas Mekas
making potato pancakes and discussing the depredations of a refugee camp after World War II; and
Louise Bourgeois
carving oxtails with a band-saw, stacking the finished meat in a pile resembling one of her sculptures.
These and other artistic kitchen moments are compiled in FOOD SEX ART | The Starving Artists' Cookbook—10 hours of video interviews, captured by Paul Lamarre and Melissa Wolf between 1986 and 1991. They broke bread with over 160 artists, talking about food, art, and life as they prepare their favorite cheap eats.
“Beans and onions. Big red kidney beans, right out of the can, fried in olive oil, with a little cumin and lots of onions…” Paul Lamarre wistfully recalls the staple diet of his lean years, as he sips red wine this September at the comparatively posh Marlow and Son’s restaurant in Williamsburg, Brooklyn. “We ate a lot of beans and onions,” Melissa Wolf adds, deftly carving an order of chicken with roasted peppers and harissa to share with her partner and collaborator of 36 years.

Lamarre, a performance artist, and Wolf, a videographer, are an artistic duo who call themselves EIDIA House, which stands for “Everything I Do Is Art” or “Every Individual Does Individual Art,” among other interpretations. They were living in the Chelsea Hotel in the early 1980s, eating that scrappy fare and filming a video narrative about the many artists who lived there. “I was getting tired of beans and onions,” Paul remembers, “and I began to wonder what other starving artists were eating. That was how it started.”
“We were already making video portraits of artists, and we thought it would be great to document artists as they were cooking, instead of just talking about art,” says Melissa. “They’d be more relaxed, and cooking is something anybody watching can relate to. You don’t have to be an art connoisseur.”
Today, the videos are housed in the collections of more than 40 major museums and libraries worldwide. The videos were originally screened at Anthology Film Archives and released as a six-volume series in 1991. EIDIA House also published a limited-edition book, with a cover designed by Lamarre, showcasing “Pravda Burger,” an absurdist treat by Russian émigrés
Komar & Melamid
. The concoction was made from shredded pages of the Russian newspaper mashed in a blender, shaped into patties and fried in a pan with butter “until done.” 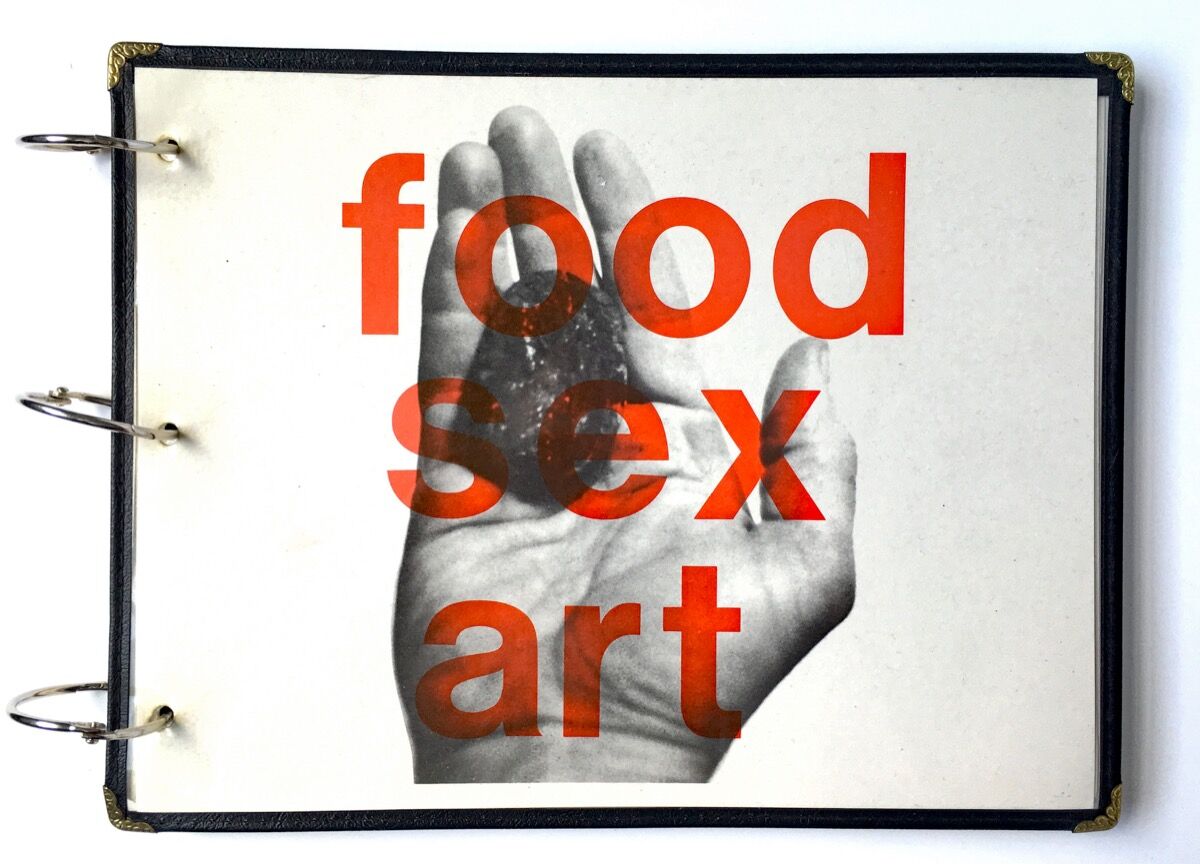 The tasty documentation of the vibrant New York City art scene in the mid-1980s, features a cast of luminaries, including Cage, Bourgeois, Mekas,
Hannah Wilke
,
Carolee Schneemann
, Gracie Mansion, and
Taylor Mead
. The full 10 hours of videos are being screened again during Printed Matter’s 2017 New York Art Book Fair at MoMA PS1, September 21–24, as part of the first comprehensive exhibition of archival materials from the project.
Presented by rare book dealer and archivist Arthur Fournier, the pop-up show includes 25 original artworks from the likes of
Marilyn Minter
and
Peter Beard
, as well as correspondence with contributors, and handwritten recipes. Mostly the recipes were edible but some, like
William Wegman
’s “Popped Vitamin C”—Vitamin C capsules heated in a lightly oiled pan until they pop—were strictly conceptual.
The cooking skills of the contributors varied greatly.
Betty Tompkins
served fried spaghetti, while her husband Bill Mutter prepared jumbo shrimp with a Thai sweet and sour dipping sauce.
Some, like art critic Anthony Haden-Guest, didn’t cook at all. “Instead of just boiling an egg, I said I’d mix a drink,” he tells me. “We went to the Baby Doll Lounge, a topless bar, and one of the girls took off her halter top and blindfolded me. I picked three bottles at random and made this thing called a ‘Sucker Punch.’ I think it was a combination of cheap wine, vodka, and Bailey’s Irish Cream. It looked like cat vomit, and tasted nearly as bad.” 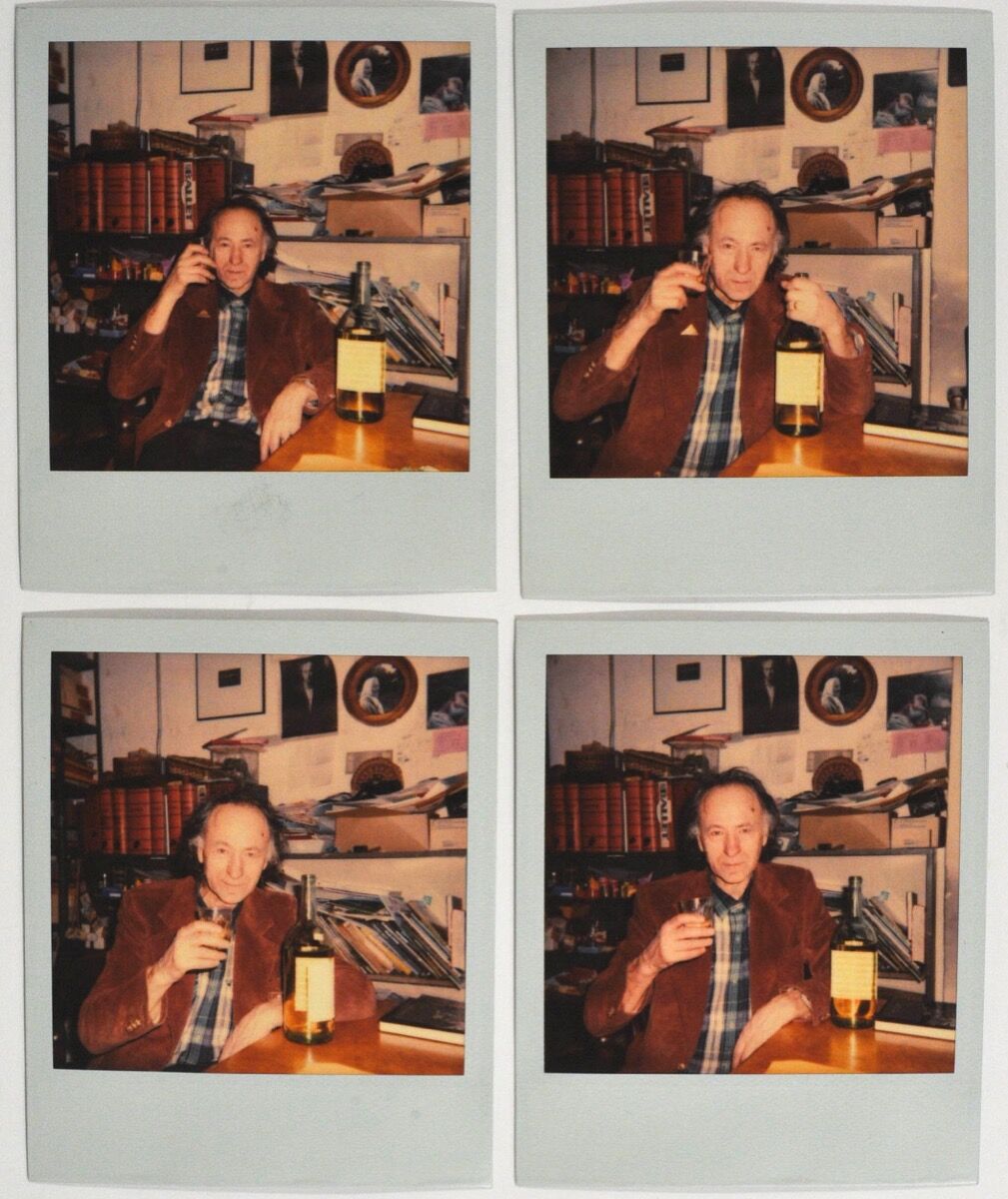 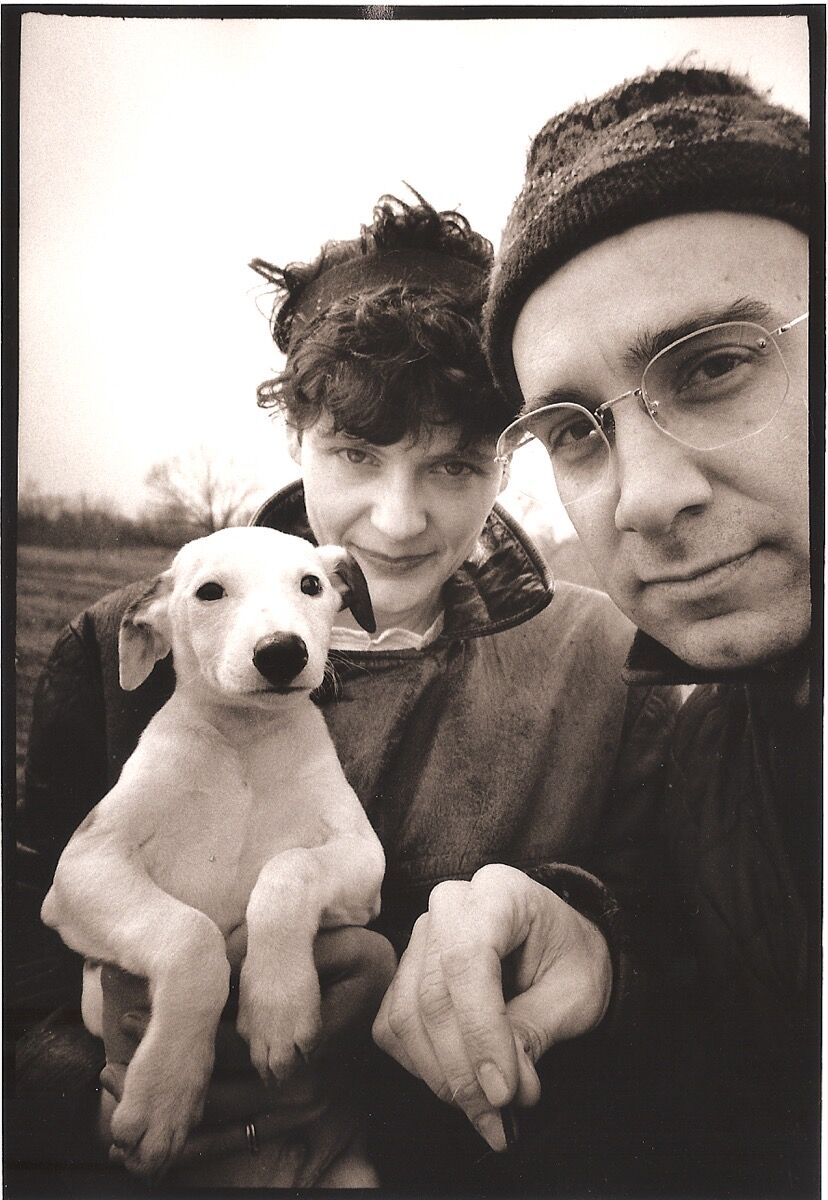 Advertisement
As a precaution for such scenarios, Paul and Melissa made it a rule to eat before they went on a shoot. “We had good appetites,” says Paul. “If it turned out to be something good, we could always eat again.”
With hundreds of artists participating, The Starving Artist Cookbook had built-in, word-of-mouth publicity. The whimsical, engaging vignettes were a downtown sensation. By the spring of 1987, Paul and Melissa were art celebrities being feted in the Michael Todd Room of the Palladium at a star-studded party attended by
Andy Warhol
,
Jean-Michel Basquiat,
and
Keith Haring
. As befits art royalty, Paul and Melissa also hosted a number of memorable EIDIA House banquets accompanying their own gallery shows. Guests at a dinner during a 1989 show at the Barbara Braathen Gallery were treated to a Medieval banquet of roasted goat; they ate with their hands, sitting at a long wooden table that Paul had built especially for the occasion.
“It was great fun,” Paul reflects. “But art stars have a short half-life in New York. The scene changes so quickly here.”
After our dinner in Williamsburg, we return to EIDIA House, the duo’s basement studio a few blocks away, a place they’ve had since 1981. Paul’s handmade banquet table is leaning against a wall lined with shelves of books and assorted art bric-a-brac. He’s demonstrating how to handle a small branding iron with the EIDIA logo on it, which was used to make hotdogs for an opening.

“We’ve both been very influenced by
Duchamp
’s idea of everyday objects as art, “he says. “In the same way, the artist can turn cooking into an artwork. The same aesthetics apply.” The front of the studio has a small glass-enclosed exhibition space resembling a greenhouse, which they’ve named “Plato’s Cave,” a place for other invited artists to exhibit their work. In recent years they’ve also been immersed in another large-scale, Duchampian project called The Deconsumptionists: Art as Archive, an experiment in creative recycling. It consists of 171 boxes, each containing older artworks by the pair that were photographed, wrapped in “caution orange” plastic, secured with a royal blue tag, and then housed in a 48-foot semi-trailer.
But over the years, food has never been far from their minds. In one food-as-art workshop they hosted in 2015, Paul and Melissa made pizzas with students at Bern University of the Arts in Switzerland. “Making pizza is very similar to making bread, which is very similar to molding clay. It’s all very similar, the process of creative function,” Paul muses. Adds Melissa: “The preparation to make a meal is so much like the preparation to make art. You need to gather your materials, learn the techniques, know what to do with your hands.” 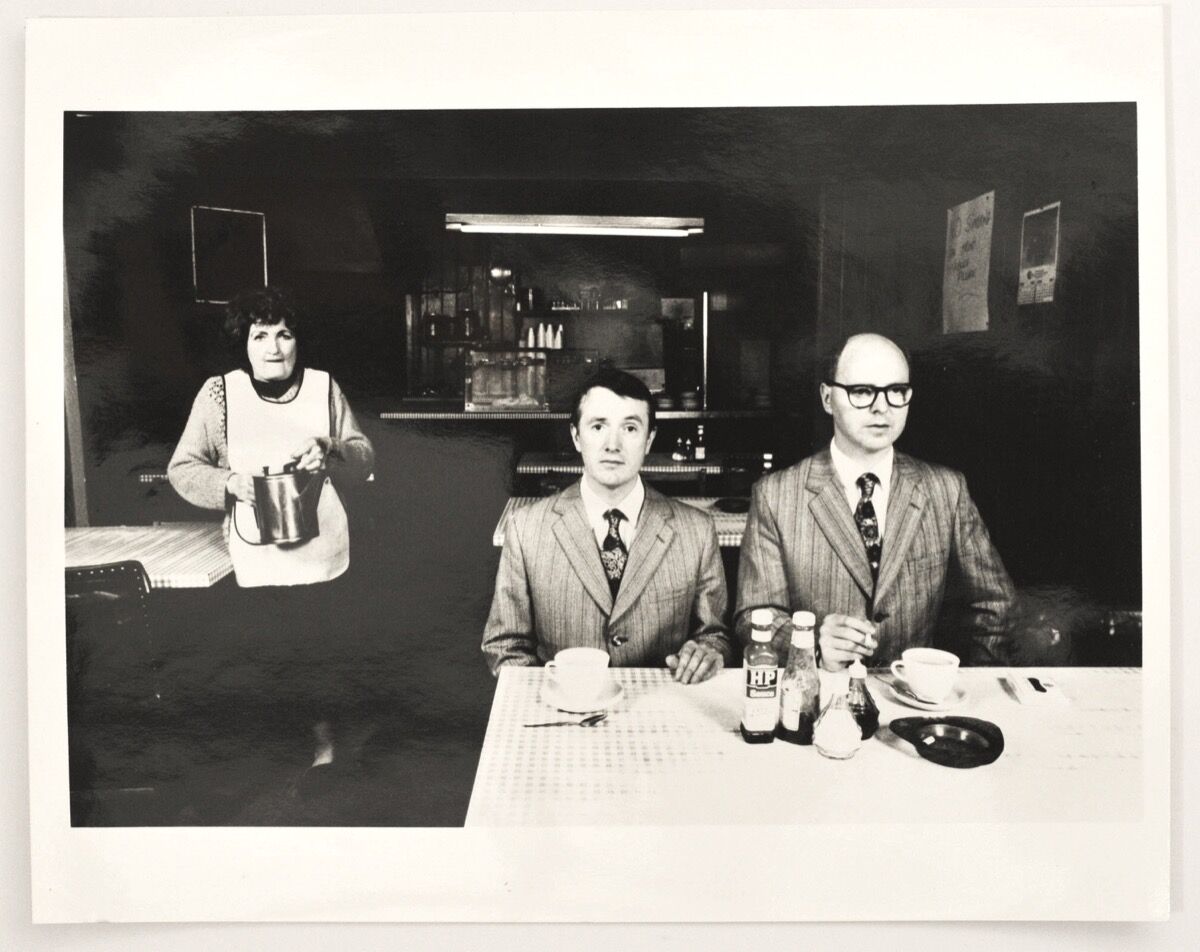 Amusing as the individual cooking demonstrations are, FOOD SEX ART | The Starving Artists' Cookbook also points to the simple, yet profound truth propounded by the anthropologist Claude Lévi-Strauss, who observed that in nature, food is eaten raw. Once it’s cooked and people share it around the ancestral fire, it’s much more than just food; it’s culture.
“Everyone we videotaped had a different recipe,” says Paul. “But in all of them, even the ones that are tongue in cheek, there’s a moment, when the artist would serve the food, and there it was: that wonderful touching, generosity. They’d shared a part of themselves. They’d shared their soul.”
—Jeff Goldberg
Related Stories