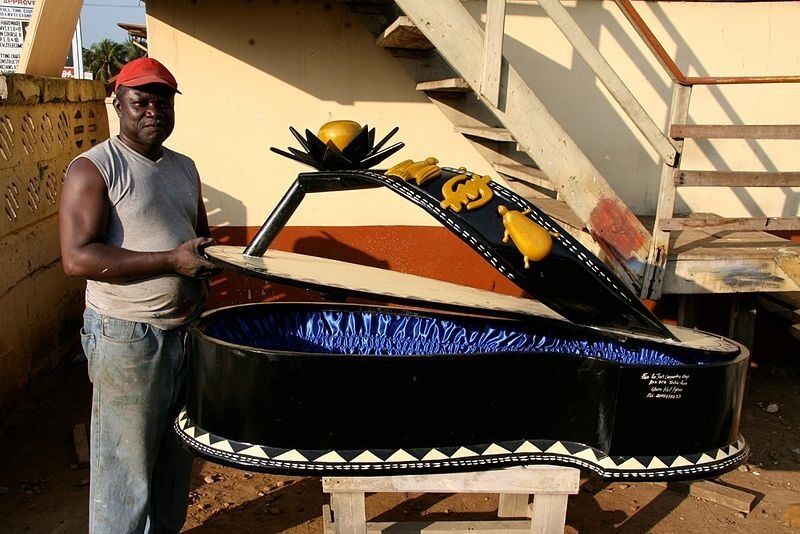 Paa Joe with his Sneakers Coffin. Photo by Regula Tschumi, via Wikimedia Commons.

They say art is immortal, but would you want to be buried in it?
Over the past 40 years in Ghana,
Paa Joe
has created coffins in the shapes of chili peppers, Coca-Cola bottles, and even giant sneakers for his customers, to carry them into the next life in style. Most of his creations, however, are now deep in the ground and will never be seen again.
Paa Joe’s works, known as fantasy coffins, continue a tradition in Ghana known as abebuu adekai. The practice traces back to the Ga community of the Accra region in the 1950s, when ornate, figurative, and custom coffin designs were realized to celebrate the lives of priests and chiefs.
And while he’s not the first fantasy coffin maker in Ghana, Paa Joe is known as a masterful craftsman, and has brought his trade into the 21st century with his surprising and ambitious creations. Far from what we might traditionally think of as funereal, his impressive and at times bizarre sculptures have also captured imaginations in the Western art world. His coffins have been presented at the British Museum, the Centre Pompidou, and the Brooklyn Museum, among others. His latest and largest show now takes place in New York, at Jack Shainman Gallery in Chelsea, and The School, its outpost in Kinderhook, New York. 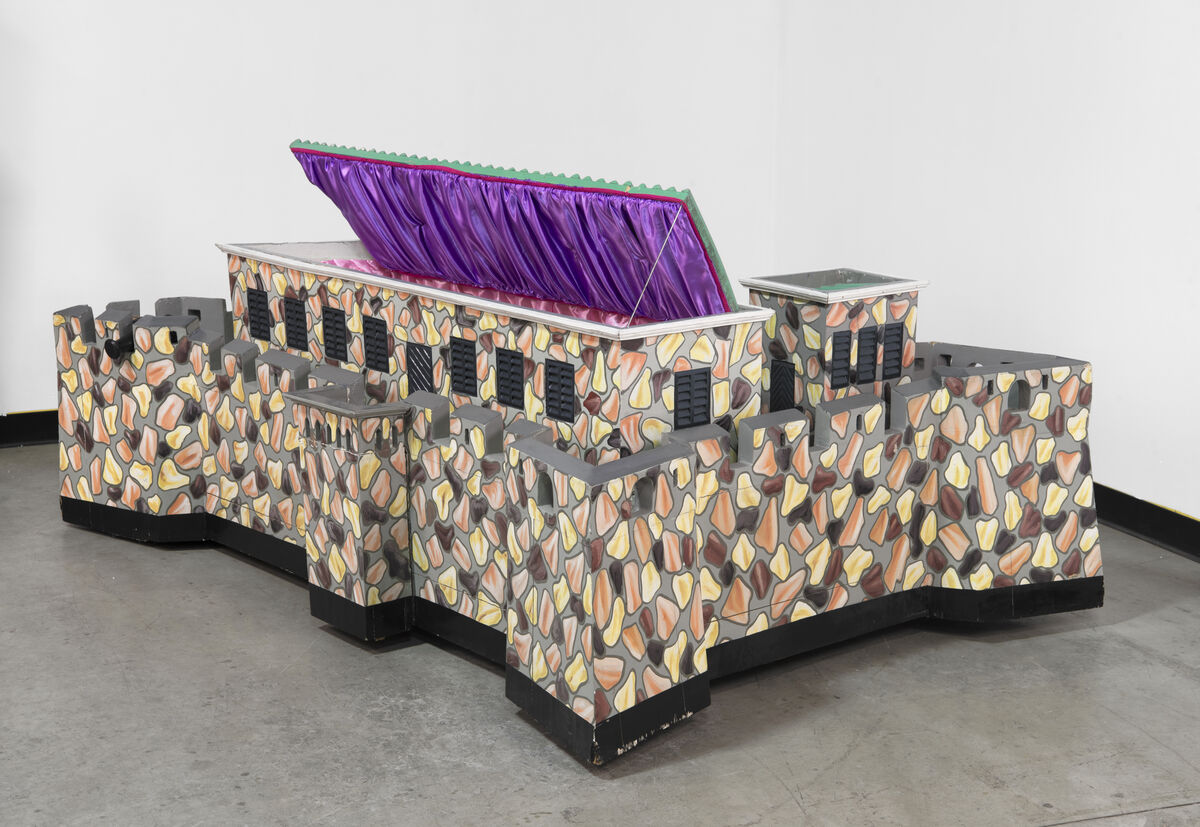 The 70-year-old Paa Joe no longer works on the coffins himself, but supervises his son Jacob Ashong, who now runs the workshop and continues his father’s legacy. “He is very strong!” Ashong says of his father, over the phone from Accra. In September, Ashong will fly to the U.S. to receive the Detroit Institute of Art’s African Art Recognition Award, on behalf of his father. It underlines the Ghanaian artist’s remarkable contributions to contemporary culture.
“The idea of an artist working on these pieces for so long, then almost immediately burying them in the ground, puts Paa Joe in a unique place that we don’t understand as Westerners,” says Jack Shainman. “The whole notion of fantasy coffins, making such a beautiful, elaborate thing to take you to the next world, is so unusual in our culture.”
The gallery presents what is set to be the most extensive presentation of Paa Joe’s coffins in one show, which serves as the centerpiece for a group show spread across its galleries. “They made sense as the starting point for this exhibition, which is about man’s quest for greatness and spirituality, and the coffins really remind you of that,” Shainman says. “They were an incredible impetus for the show.” The exhibition brings together works from the 17th century up to a few finished last week, by a roster of artists not commonly seen together, spanning Francisco Pacheco,
Walker Evans
,
Zhang Huan
,
Lynette Yiadom-Boakye
, and
David Hockney
. Advertisement
But getting the 11 coffins—each measuring 12 by 11 feet—to the U.S. has not been easy. In fact, their arrival in New York is the end of a voyage that has lasted more than a decade.
Claude Simard, the late co-founder of Jack Shainman, traveled extensively in Africa and Ghana, and it was on one such trip in 2004 that he visited Paa Joe. Paa Joe was already known as the greatest coffin maker in the country, and Simard commissioned him to create 13 coffins shaped like castles, based on the 13 Gold Coast castles, where slaves bound for America were held captive in the 15th century.
The castle coffins are unusual for Paa Joe, whose works are typically based on the lives and interests of the individuals who are to be buried in them. “Claude had an enduring commitment to political pieces and the coffins are a statement in themselves, but the castles are so different to the rest of Paa Joe’s practice,” says Shainman. “When you see the castles and where the slaves were kept, you feel pity, it’s a pity,” Ashong explains wistfully. “We realize slavery was a bad thing; we are all humans, we don’t need to take advantage of our fellow beings. This exhibition is in a way an advocacy to stop slavery and exploitation.”
The problem of slavery, however, isn’t in the past. “We have freedom now, but slavery still goes on; now it is not with chains, it is with offers that try to exploit us,” Ashong suggests.
To create these coffins, Paa Joe spent long days visiting each of the 13 Gold Coast castles with a photographer to document every detail and sketch architectural plans. Back at his workshop, he set about recreating them in wood; he carved and painted them by hand with painstaking attention. By 2005, they were complete. 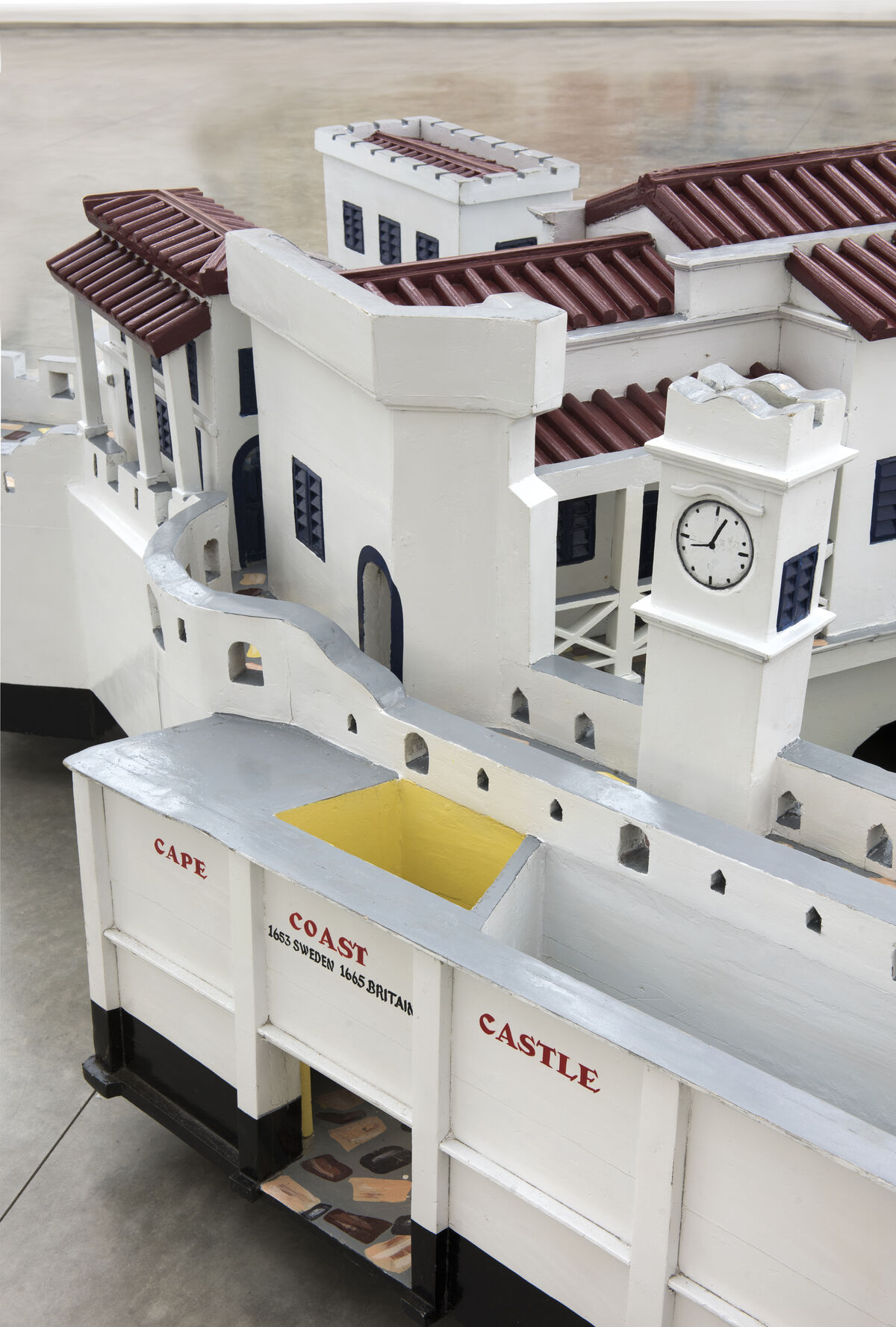 However, the castles never made it to the U.S. “There was a problem with the shipment, and only two were sent,” Ashong says. From 2005 to 2016, the remaining 11 coffins stayed in Ghana. Owing to their size, it was impossible to find a suitable space to store the coffins properly. In 2014, Ashong called Simard, who agreed they should finally ship the coffins—but there was a new problem. “At this point, many of the works were damaged as they had to be stored outside, and being made of wood, they had suffered some rot,” Ashong explained.
Sadly, in June that year, Simard suffered a heart attack and died. “We all felt very, very bad. We couldn’t even eat. We were so sad,” Ashong recalls of receiving the news. Despite working in the coffin industry for 40 years, he adds, it was the first time a business partner had passed away.
Later, Ashong contacted the gallery again. It was then that Jack Shainman first became aware of the coffins. “He called me and I’m like, ‘What coffins?!’” Shainman laughs. He has, he quips, received some concerned emails from friends wondering just why he is putting so many coffins in his galleries. 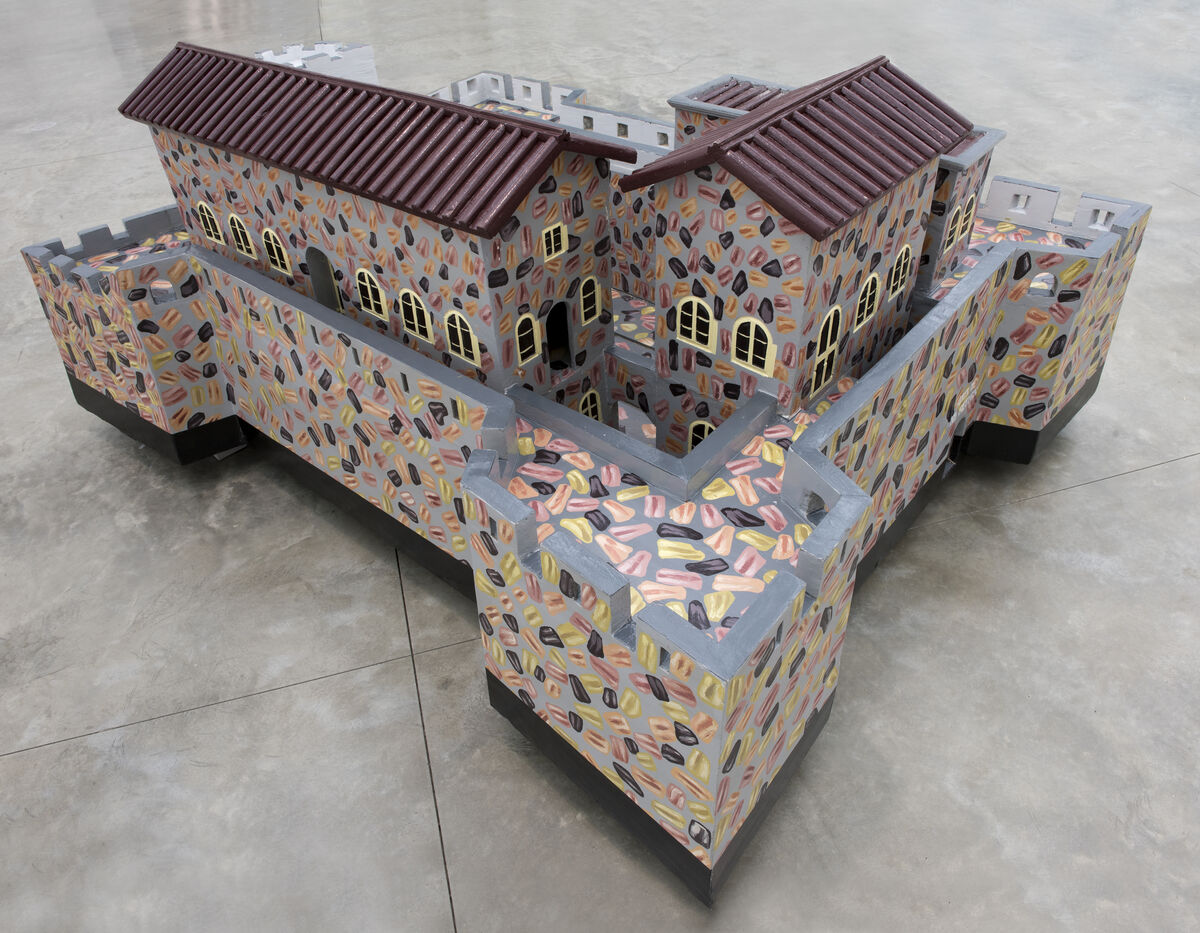 Finally, this month, the coffins landed in the U.S., and at the time of writing were making their way to the gallery, ready to be seen by the public for the first time after more than 10 years in the workshop in Ghana. “We were thinking of changing the title to ‘the pursuit of Paa Joe’s coffins,’” Shainman jokes.
“I hope it will be something new and unusual to the American audience,” Ashong remarks. Asked about their feelings on the exhibition, despite everything, his enthusiasm is abundant: “We are over excited!”
Given the incredible journey the castles have made and the challenges along the way, they now also carry a special resonance—a memory of Simard and a celebration of his life, as much as a commemoration of the atrocities of slavery in America. For Paa Joe, meanwhile, his artworks will continue long after he passes to the next life—and, he says, he’s more likely to travel there in a coffin shaped like a hammer than a castle.
Charlotte Jansen
Related Stories