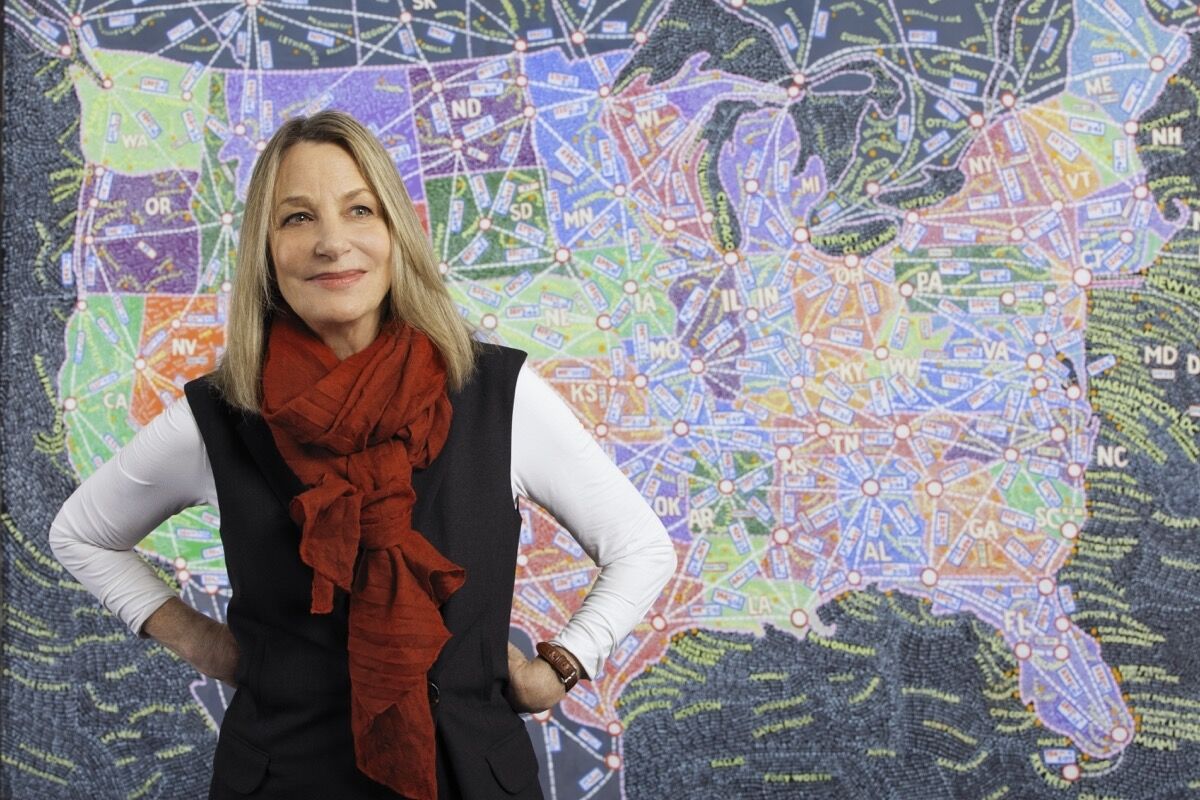 Portrait of Paula Scher by Ian Roberts. Courtesy of Pentagram.

When you look down at your exhibition guide at the Museum of Modern Art in New York, you’re looking at
Paula Scher
’s handiwork. If you’ve been to Shakespeare in the Park or any other Public Theater event in the last 20 years, you know one of her most loyal clients. If you live near any of Citibank’s thousands of branches, eat at Shake Shack, or have used Microsoft Windows 8, you’re familiar with her designs. A partner at Pentagram’s New York office since 1991, Scher is not only one of the most important designers of our time, she is also a testament to the communicative power and reach of graphic design.
“I think in terms of being excited by ideas,” Scher recently explained over the phone. “Sometimes I see something that triggers a thought of something I want to attempt.” Her mind might shift into gear over a few spoken words or a sign on the road; it can even happen in the bathtub, she admitted. Like artists, graphic designers rely on their creativity to make images. In their particular case, however, these images are tasked with a wide range of duties—from expressing brand identity to telling Floridians how to vote.
But Scher is wary of the notion of “creativity,” which she playfully referred to as “the C-word.” To be creative “is to have ideas and ideas come from all kinds of places,” she explained. “It’s mostly being able to have an open mind about something.” Ideas come to her, but she doesn’t concern herself with why or how that happens. But she does have a good sense of what fuels her work as a graphic designer.
“My output seems to come from a physical and emotional sense of activity,” she explained, “and usually optimism.” At times in life, she’s been brimming with ideas, while at other points, she’s drawn a blank. But the key, she explained, is to accept both circumstances and run with the ideas when they strike. Here, we share just a few takeaways from a conversation with Scher on how to pursue a career in graphic design. 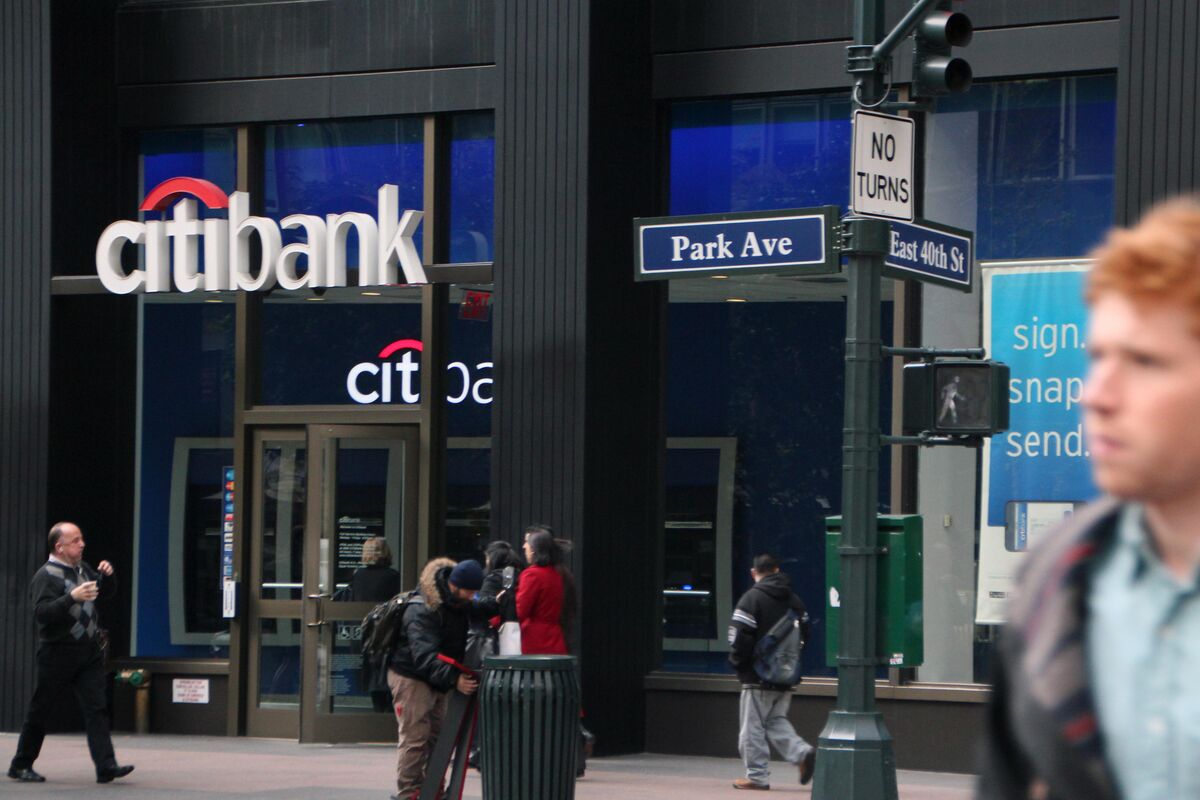 The story of how Scher designed the Citibank logo has reached legendary proportions in the graphic design world, primarily because she got it right on the first try.
It was 1998, and Citicorp and Travelers Group had just merged to become the largest financial company in the world, and Citibank needed a logo to reflect it. The curve at the bottom of the T in the word “citi” reminded Scher of the curved handle of an umbrella—like Travelers Group’s old logo. She took a napkin and swished her pen back and forth between the dots of both Is, and so was born the new Citibank logo.
Scher said that a lot of her designs come from her first sketches. “Though it has happened,” she explained, “it’s rare that I don’t come up with a good initial idea.” The key is to always be observing and sketching. She’s not precious about her sketchbooks and usually jots down her ideas on whatever scrap pieces of paper she can find. Importantly, she makes a point to always be receptive and ready for inspiration to arise.

Find your voice through your surroundings 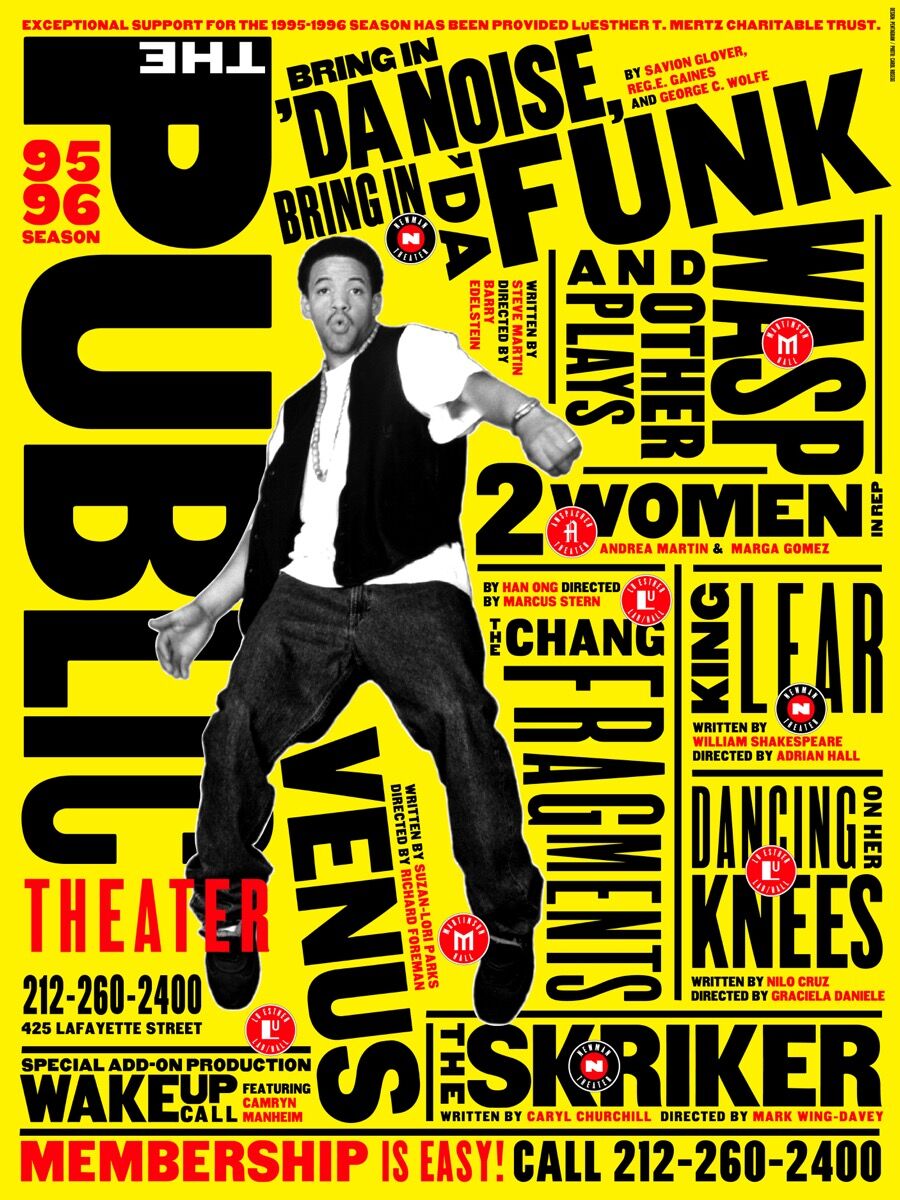 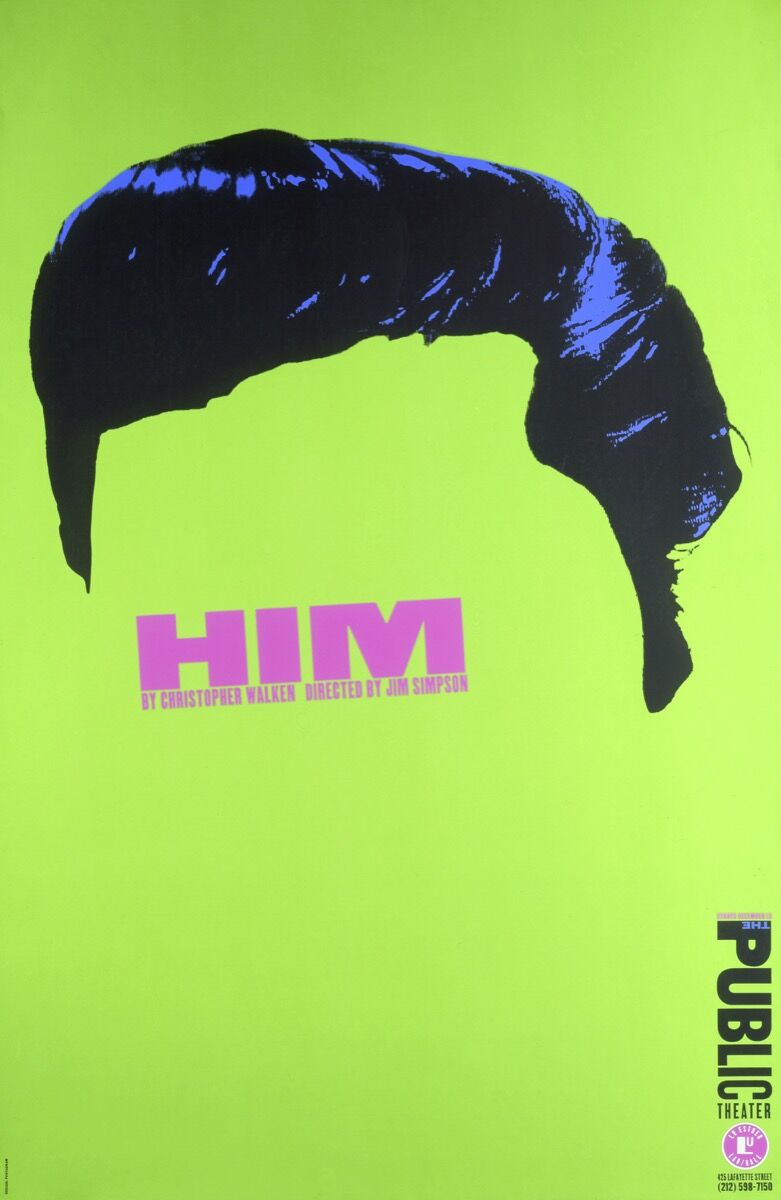 Paula Scher, Him poster for The Public Theater, 1994. Courtesy of Pentagram.

Advertisement
If “New York” were an adjective, then Scher would easily rank as one the most New York graphic designers of all time. Her earliest contributions to the city’s typographic identity can be traced back to the 1995 poster for the Public Theater’s show Bring in’Da Noise, Bring in’Da Funk, where the weight and proportions of words seem to narrow, widen, and turn like the city’s streets. The impact of that first round of posters was so great that they’ve “inspired” a good number of other “tributes.”
Scher was born in the suburbs of Washington, D.C., where her father worked on the U.S. Geological Survey as a photogrammetric engineer. Since her mother was from Williamsburg, Brooklyn, the family often drove to the city to see relatives. “The typography of the Holland Tunnel is emblazoned in my memory as this entryway to something big and powerful,” Scher recalled. She keenly remembers the experience of emerging on the other side—the scale of the buildings, the narrowness of the streets, and the cacophony of signs that welcomed her into the city.
“The crowdedness of the city affected my typographic landscape,” she explained, adding that it’s also played a role in how she sees the world. “I look at it through an urban lens.” New York is her influence, her style, and its institutions are frequent clients; beyond the Public Theater and MoMA, she’s also lent her urban sensibilities to the New York City Ballet and the Metropolitan Opera.
She does, however, keep a studio in Connecticut to paint. It’s the middle ground between city and country that she “can’t stand,” she added with a chuckle.

Get your hands dirty 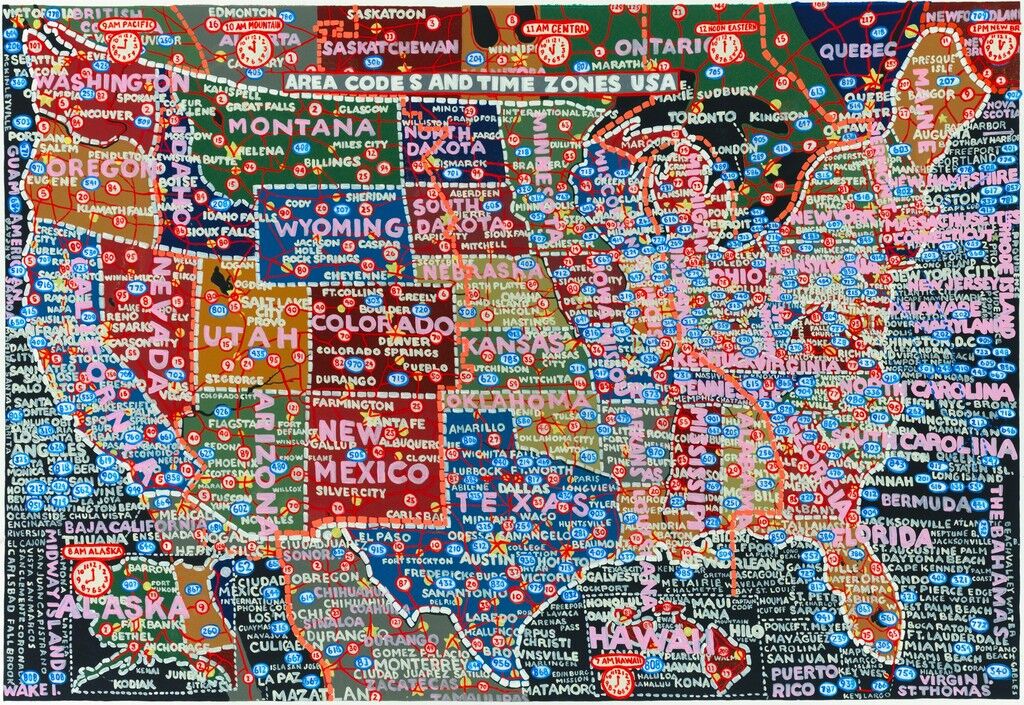 Paula Scher
Area Codes and Time Zones, 2015
Bryce Wolkowitz Gallery
Scher is quick to profess her affinity for materials (“I love art supplies!” she exclaimed). Up until the 1990s, a graphic designer’s workstation would typically smell of paper and paint; its surface would host an array of rulers, eraser dust, and a hazardous number of X-Acto blades. Scher’s workstation at CBS Records in the 1970s was certainly all analog, but over time, as a computer replaced her art supplies (“It doesn’t smell like an art supply,” she said about the computer, “it smells like a car!”), Scher leaned into her own painting practice.
“I go to the country to paint because I have space there,” Scher said, referring to not just real estate, but also mental space that gives her a necessary distance from her weekday duties. She’ll put on a movie she’s seen a hundred times to play in the background as she obsesses over the slow and considered process that her paintings entail. Scher creates massive paintings of maps with as many small demographic details as she can fit in them. The dense, swirling typographies document everything from zip codes and county names to median home prices.
But painting is more than just a way to relax and regroup. “I have to challenge myself to grow bit by bit as a painter, and it’s a very different territory,” Scher explained. It reinvigorates her creative cycle and replenishes her enthusiasm for her work. “I think it kept me going,” she added.

Teach clients how to see 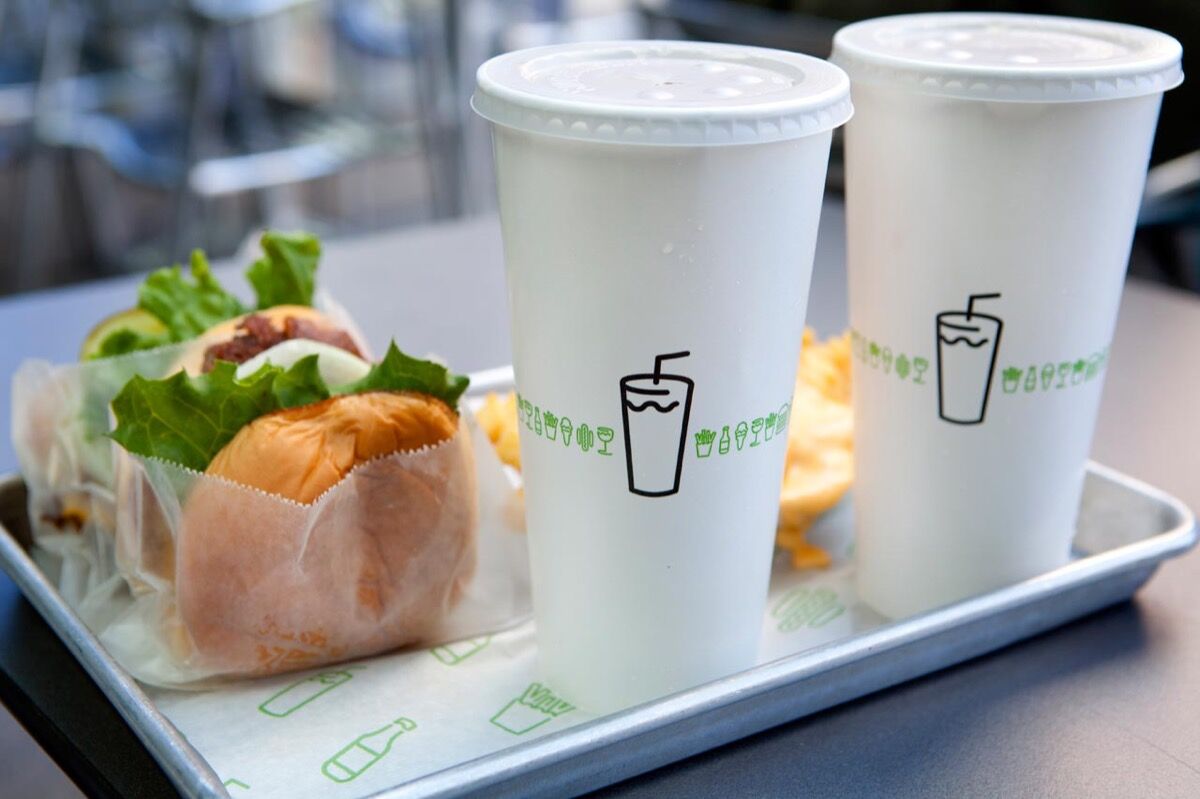 When you’re a graphic designer working at an agency, you have to include your client’s needs and tastes in your design. Scher has learned what works for her, and she’s mastered the art of the client call. “I know how to read what someone’s level of expectation [is], how much chance they’re going to take,” she explained.
She hops onto client calls with as many as five or more decision-makers on the other end of the line. Her questions are leading and conversational; she asks about the clients’ needs, purpose, and competition. If they come to her agency, Pentagram, she gives them the books that compile all the logos the firm has designed and asks them to mark the ones they like and the ones they hate.
“Ninety percent of what I do is…teach people how to see,” she explained. She schools them on why typeface matters, how form conveys a certain message, and describes it in relation to the client—“so that you’re making the design another adjective to express them,” Scher explained. 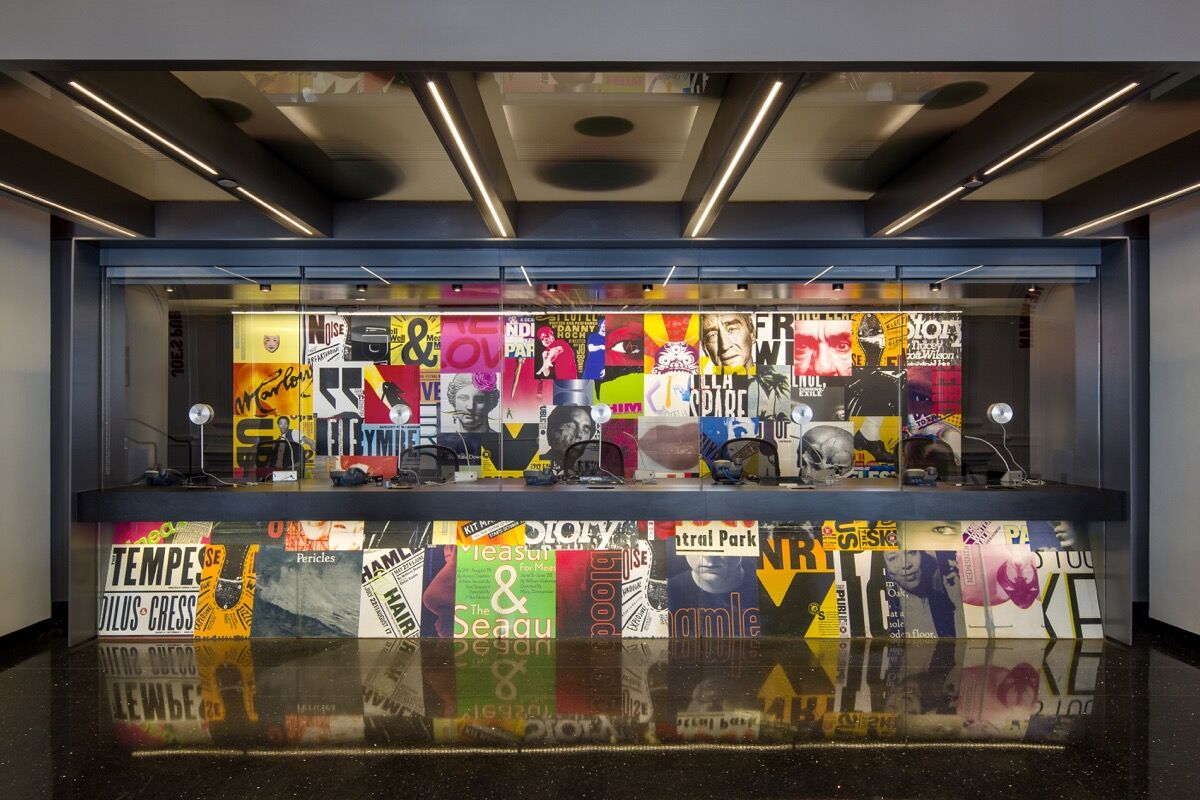 Scher was once on a panel at Rockefeller University, where they were trying to figure out what motivated both artists and scientists. “The thing we agreed upon was a real contempt for rules,” she explained.
Before 1994, the Public Theater was focused on promoting its seasonal programing. It made sense: The theater’s employees wanted the public to come see the shows, so they promoted the shows. But promotion for the shows was only as successful as the shows themselves.
For Scher, the expectation for a given project is just a starting point. “I sort of flopped that expectation by making it about the place, and the show became an aspect of the place—not the other way around,” she said. The visual identity she was crafting for the Public Theater gave the place a voice and a point of view in the public imagination. Scher acknowledged that during the first dozen years she designed for the theater, she did some “very nice” posters, but she feels that her current work is much better. Indeed, the precedents and expectations Scher subverts today are often her own past work.
And while the desire to challenge and subvert can fuel innovation, sometimes the job at hand is not that exciting. Scher likens it to being overdressed for a casual get-together with friends. At the end of the day, graphic design using typography has to be legible, informative, and efficient. “So many of the things that need to be designed, in a funny way, they sort of don’t matter,” she said.
Scher admits that graphic designers often have projects that don’t give them space to make breakthroughs—and that can be demoralizing. But, as she’s learned through her painting practice, it’s important to recognize that “there are small breakthroughs and there are large breakthroughs.”
Michelle Santiago Cortés
Related Stories