Legendary Filmmaker Gus Van Sant on the Magic of Painting 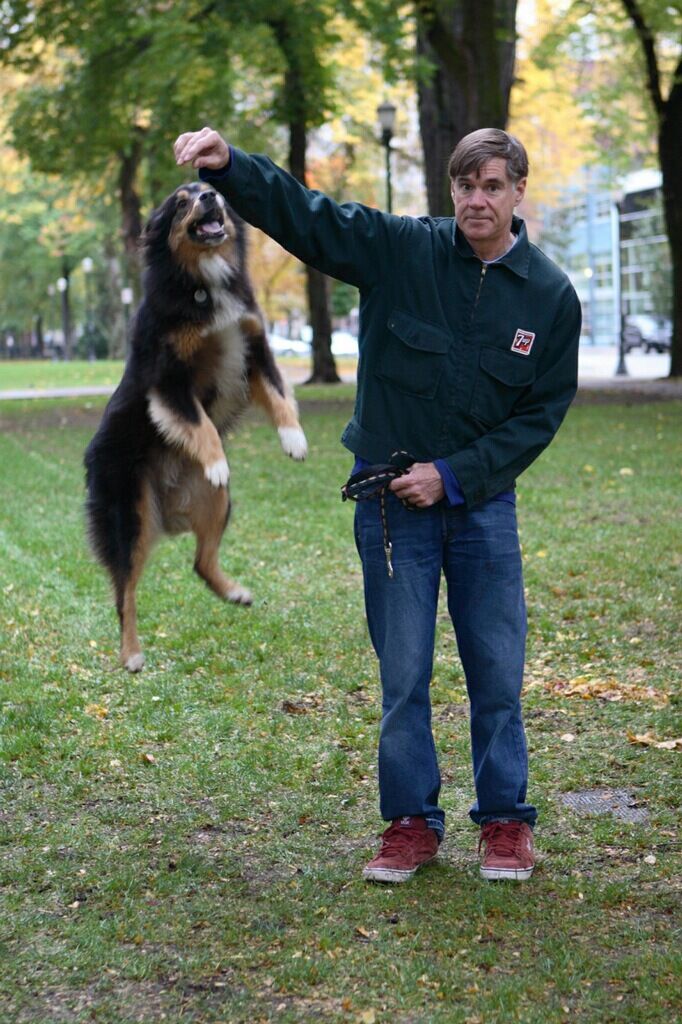 Gus with Milo. Photo by Scott Green. Courtesy of the artist. 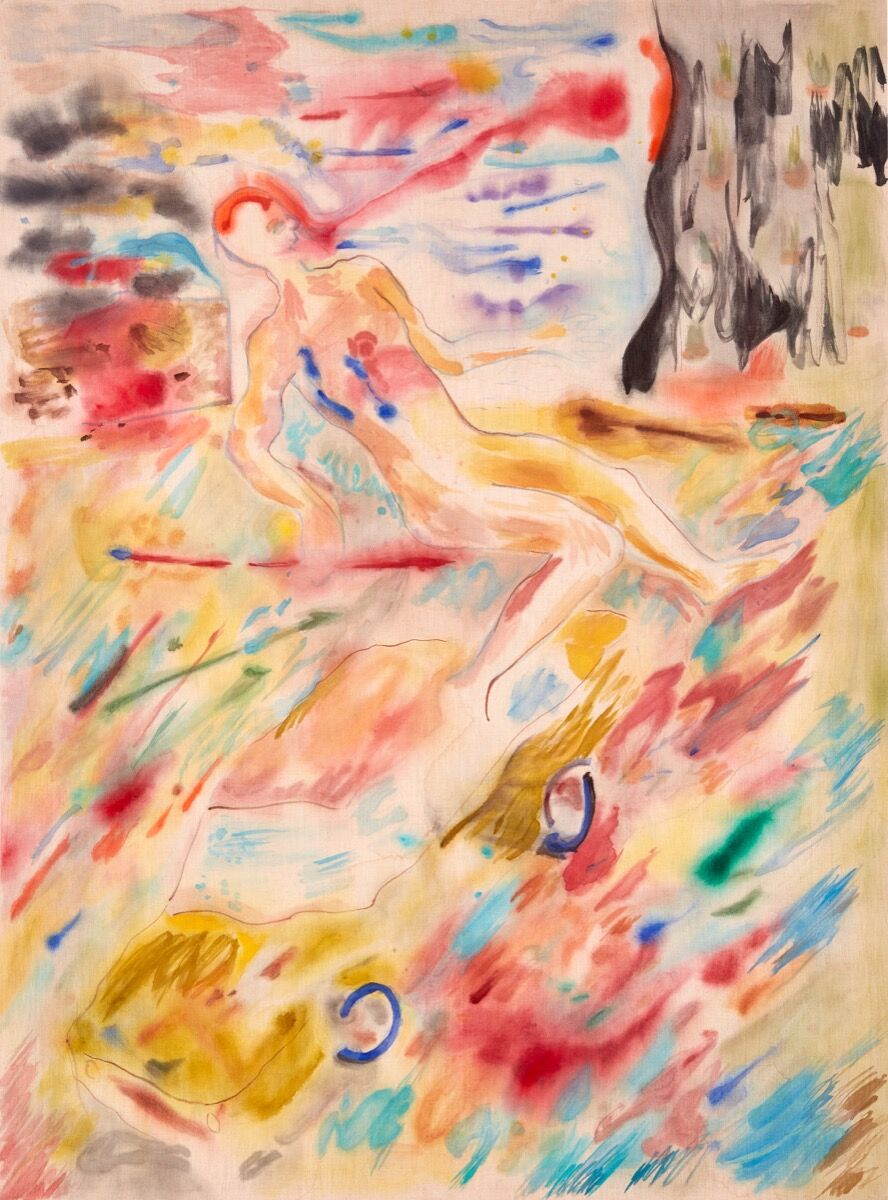 Gus Van Sant
’s new painting exhibition conjures a scrambled, abstracted storyboard translated onto large-scale, linen canvases. In eight new watercolors, all around 7-by-5 feet, Van Sant creates sympathetic protagonists: nude, larger-than-life men wandering alone through the Los Angeles landscape. They sit on and stomp over cars, at odds with the sprawling, automobile-littered metropolis. The pictures, on view at Vito Schnabel Projects through November 1st, resemble classic films, in which a giant figure towers over a city—Godzilla, for example, or King Kong—though the painter has moved the action westward.
Van Sant is best known as the legendary director of such films as My Own Private Idaho (1991), Good Will Hunting (1997), and Milk (2008). Outsider characters in conflict with their particularized settings prevail throughout his screen oeuvre—homeless youth on the streets of Portland, a poor and brilliant janitor in Boston, an aspiringqueer politician in a rapidly changing San Francisco. Van Sant’s new paintings evidence the same themes and a thoughtful, more introverted side to his aesthetic practice. 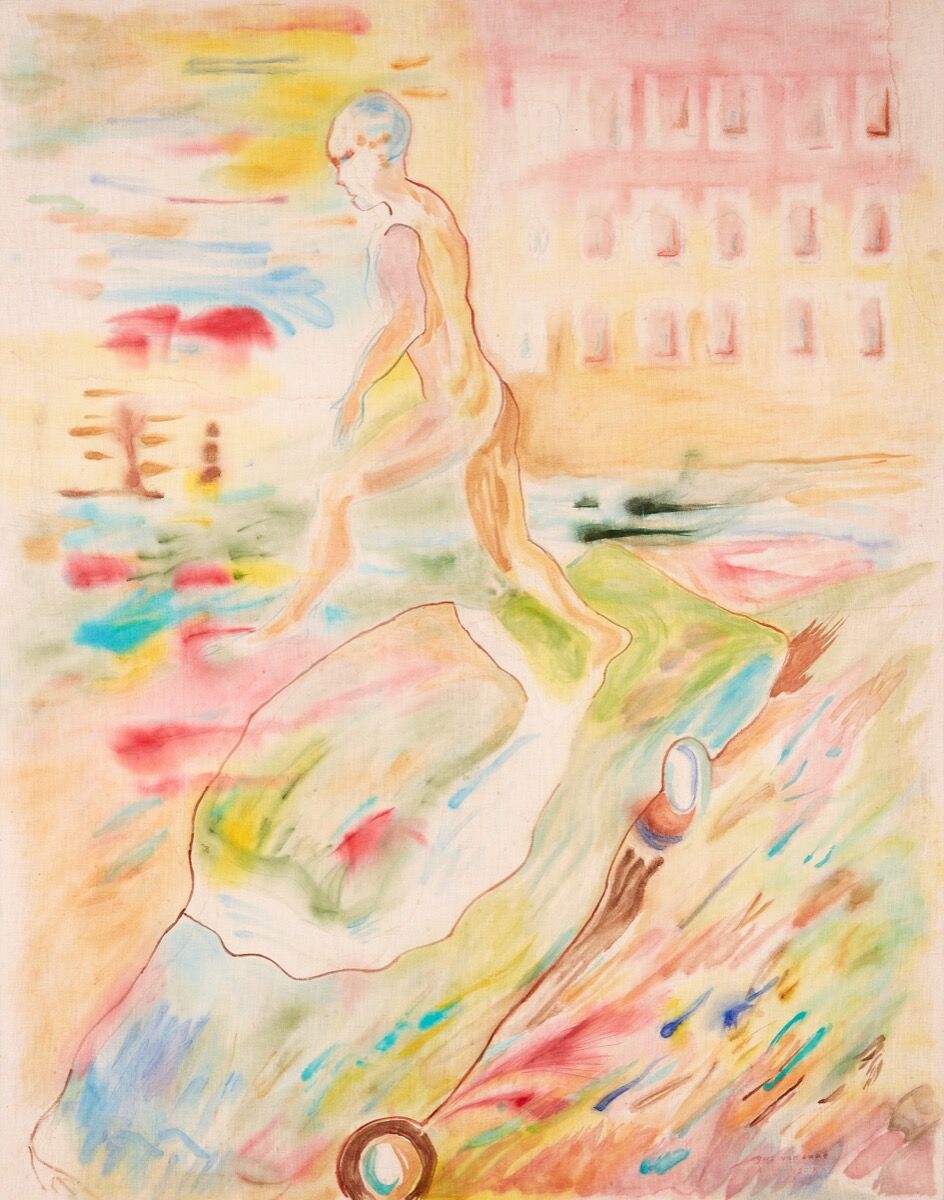 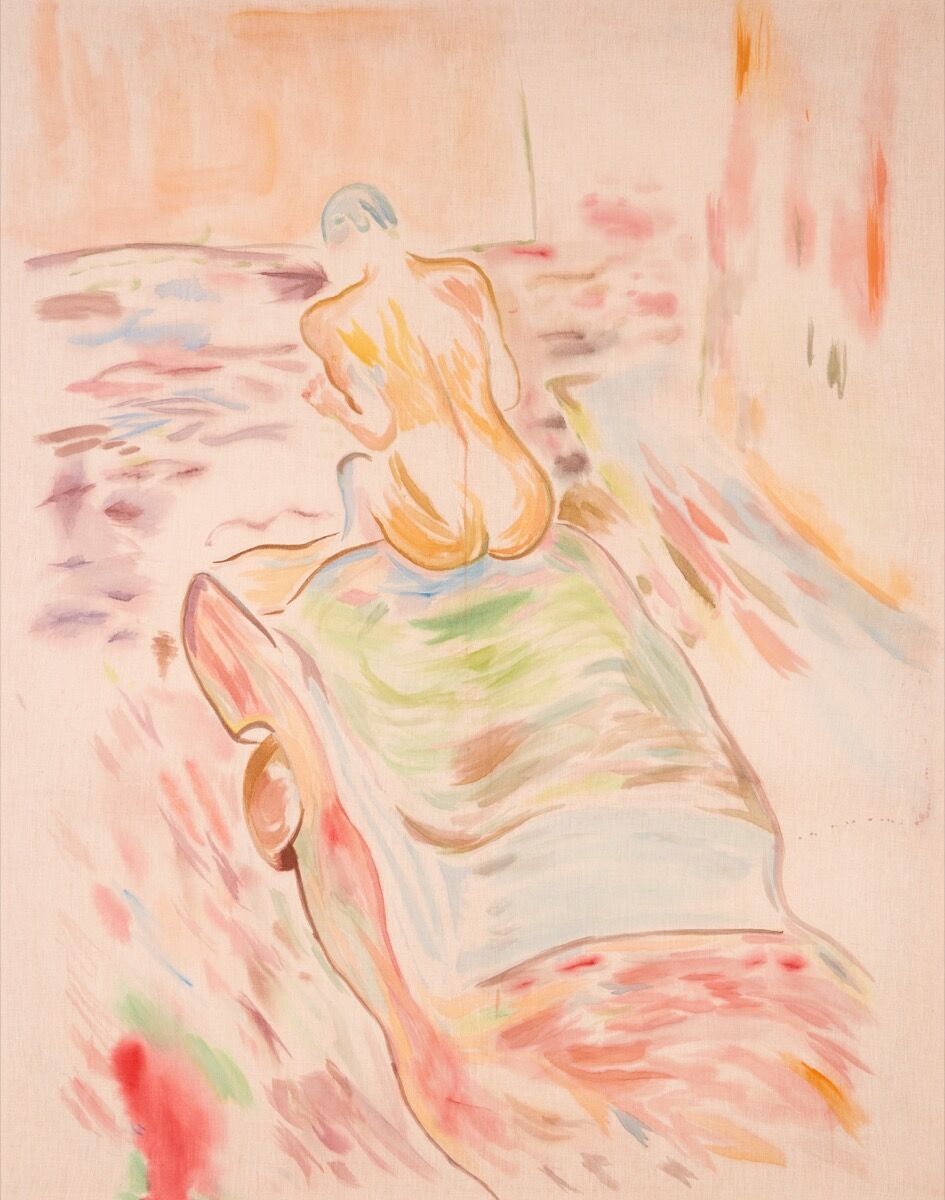 Van Sant has lived in Hollywood on and off for around 45 years, since he graduated from the Rhode Island School of Design (RISD). His paintings offer a composite of his memories of and experiences in the area, which he renders with dreamy, mythic haziness. The architecture outside Van Sant’s window, near Hollywood Boulevard, populates his canvases. The Capitol Records building, round with a white spike protruding from its tip, becomes a pastel layer cake of a structure in Untitled (Hollywood 4) (2018–9). The Griffith Observatory caps the top of a hill in Untitled (Hollywood 16) (2018–9). Rendered simply, with straight white columns and a sky blue dome, the building resembles some kind of holy temple that the crouching figure at the bottom of the painting is trying to reach.
Two poles of the Hollywood ecosystem—the Oscar statuette and the homeless population—inspired Van Sant’s figures. “I just realized these are very uniform-looking, golden figures,” the artist said about his solitary men. “I thought, ‘oh, that kind of looks like the Oscars.’ The Oscar is so pervasive as a desired object within the town.” Hollywood Boulevard plays host to both the Kodak Theatre (known as the Dolby Theatre since 2012), which hosts the awards each year, and panhandlers. He has long reacted to the drifter youth in his neighborhood: They inspired My Own Private Idaho and its charming, degenerate characters made indelible by River Phoenix and Keanu Reeves (though in the film, Van Sant transports them to Portland). 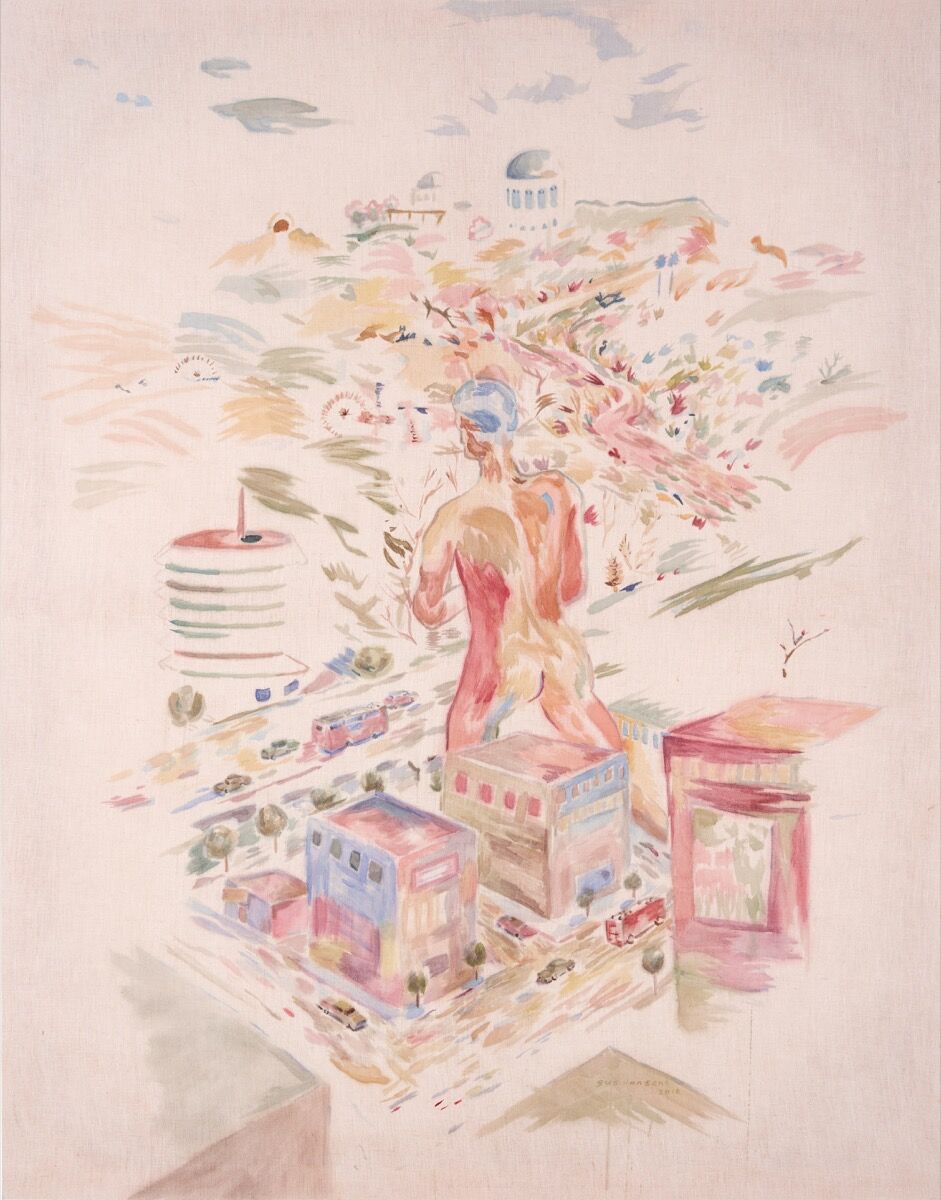 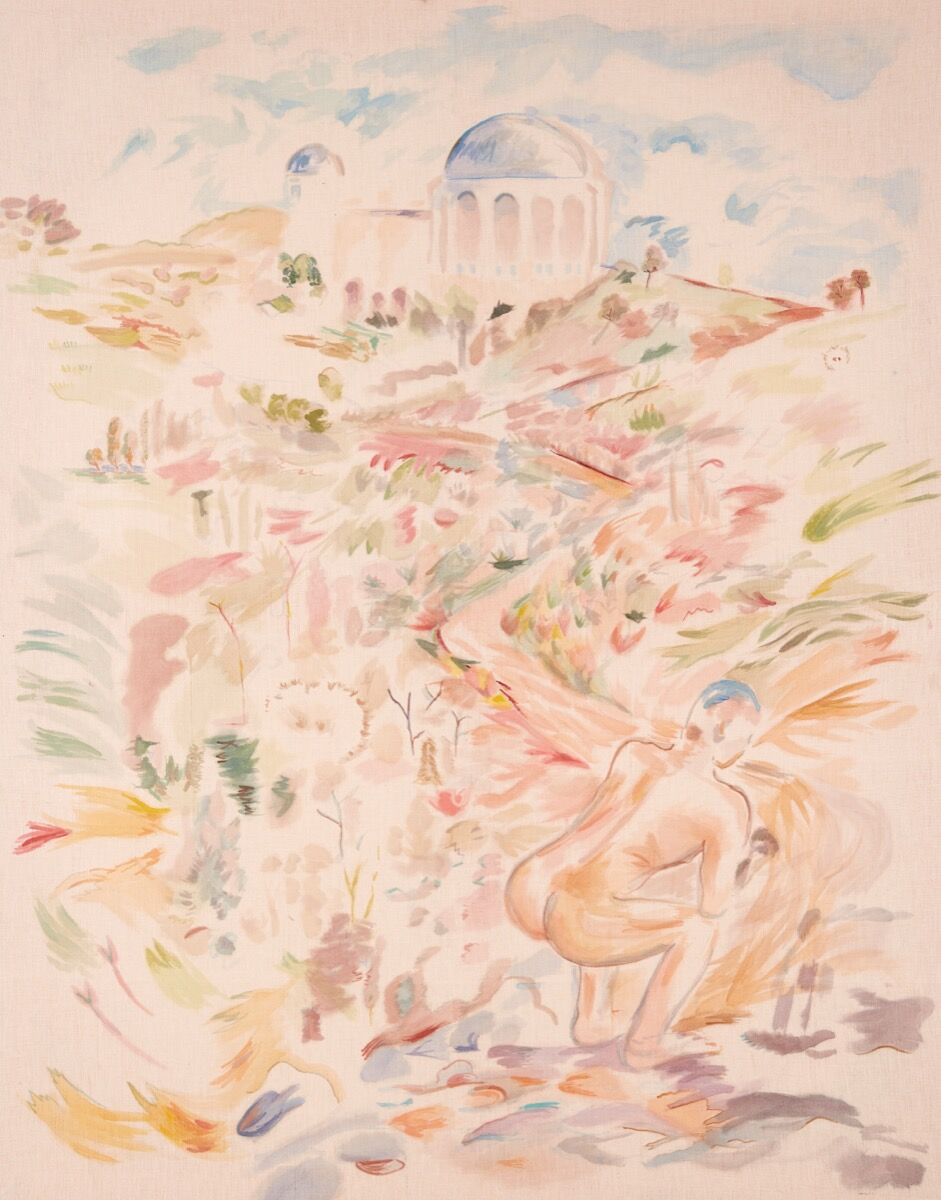 Advertisement
Van Sant notes that he had a major breakthrough in his art practice after a friend suggested he abandon live models and photographs and work from his imagination instead. The artist began many of the new canvases by making preparatory drawings or watercolor studies. He notes the challenges inherent in his chosen medium: “It’s not easy,” he said, “because as soon as the canvas gets wet, it turns dark. So you’re working with a dark surface, and you can’t tell until it dries, which takes half an hour or so.”
Though this is Van Sant’s first major exhibition in New York, he’s been painting for decades. He attended RISD in the 1970s and double majored in painting and film for the first two years, before devoting himself to the latter for the last two. In 2012, Gagosian Gallery in Los Angeles gave him a joint show with James Franco, which featured watercolor portraits by Van Sant and two collaborative films that riffed on My Own Private Idaho.
The origin story of the current Vito Schnabel Projects show is a Hollywood tale in itself. Van Sant recalls that he first met Vito Schnabel about 20 years ago, in an airport. The artist ran into producer Jon Kilik, who was sitting with his collaborator, painter and filmmaker
Julian Schnabel
, and his teenage son, Vito. 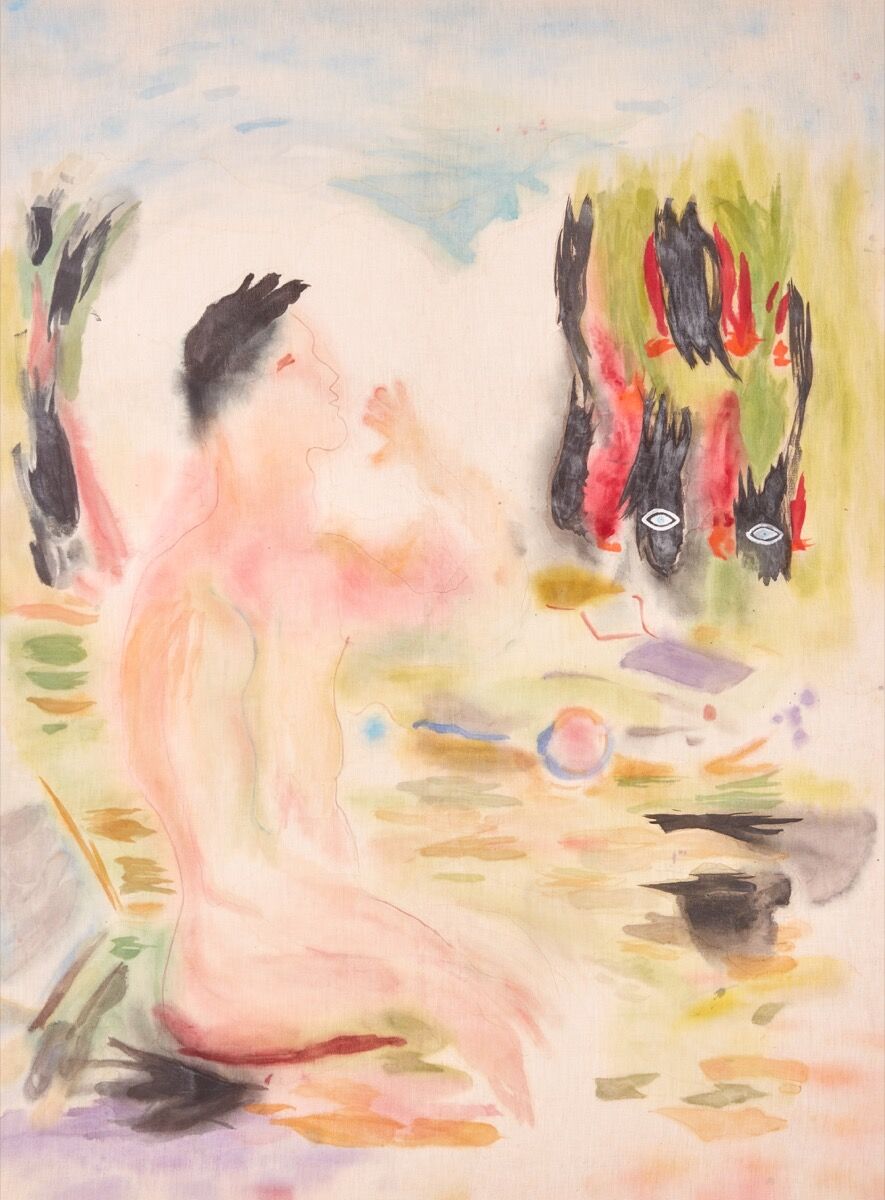 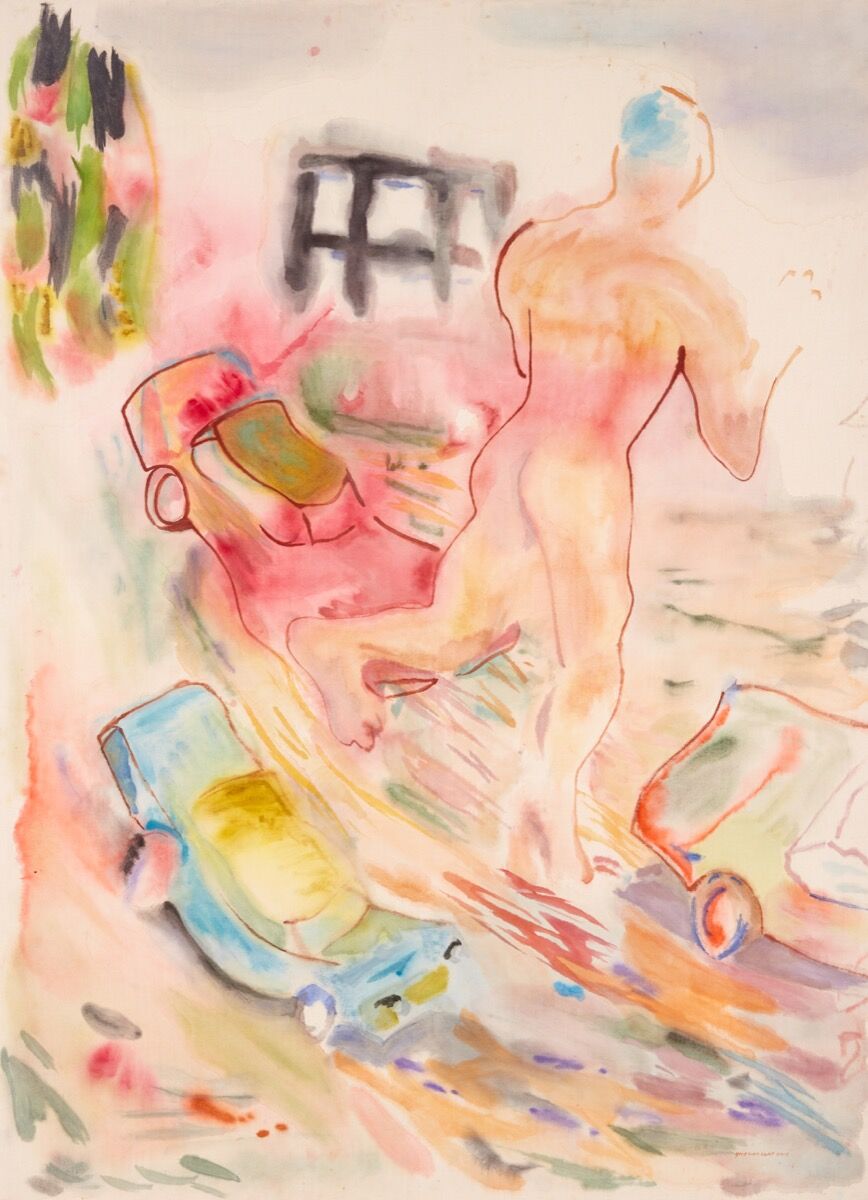 Years later, Van Sant heard that Vito had grown up and was selling art. So when Van Sant ran into the art dealer at an Oscars party this past February, he made a pitch, inviting Vito to come to his studio and see the work the next day. Van Sant remembers that Schnabel was immediately enthusiastic, more or less offering him a show on the spot.
For Van Sant, one of the biggest differences between filmmaking and painting is the physicality of the latter. “You’re always watching the paint as you put it wherever you’re putting it,” he says. “Stroke by stroke, you’re impressed and amazed by the magic thing that happens.”
Given his subject matter and emphasis on place, Van Sant has a lot to live up to, color-wise. One expects the bold, saturated hues of
Alex Prager
’s photographs, for example, or the flat, sunny surfaces of a
David Hockney
pool scene. Yet Van Sant’s shades are muted, even tepid at times. Going through the show, I wondered what additional magic might happen if the artist stood back and allowed color itself to tell more of his story.
Alina Cohen
Related Stories