Why Legendary Pop Star Selena Is This Artist’s Role Model 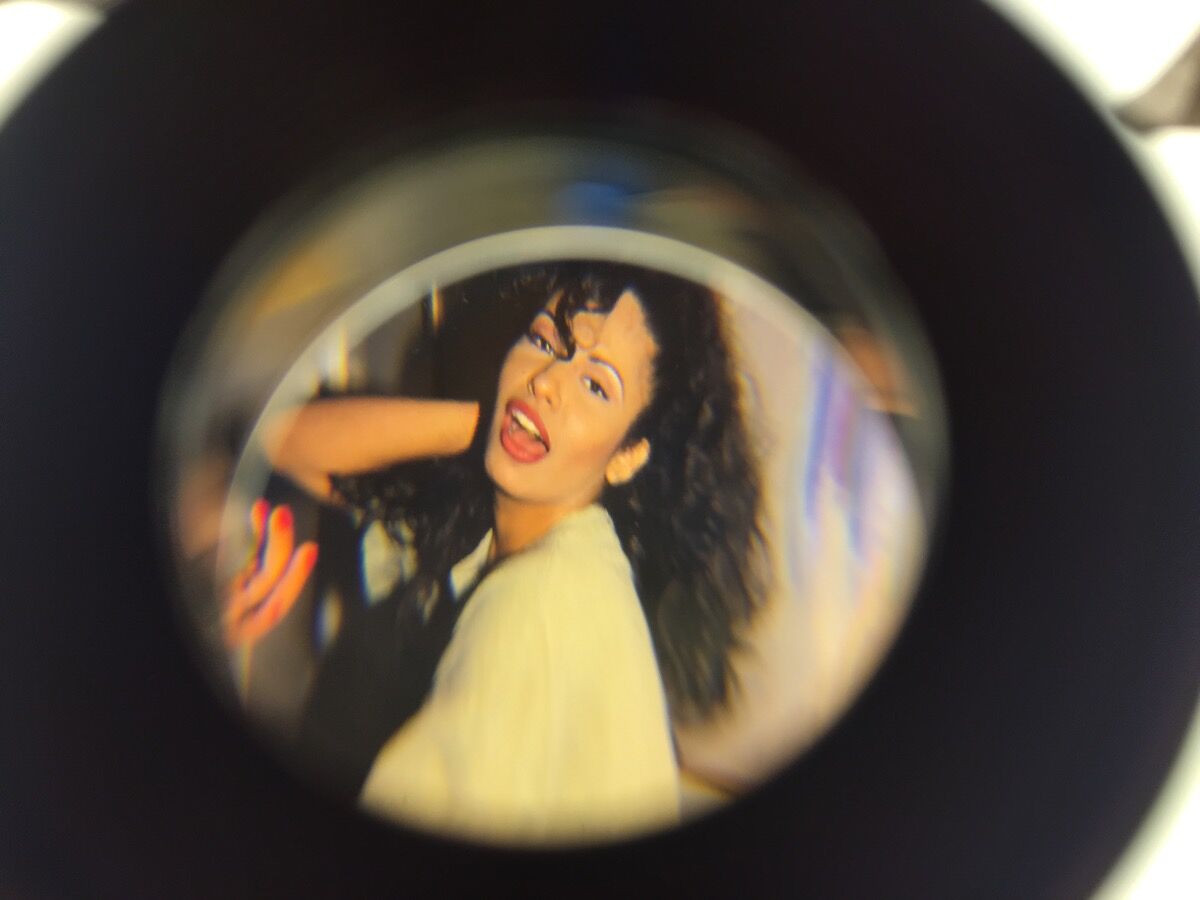 Travis Boyer
is best known for lush, tactile paintings on velvet, or semi-abstract works that utilize dyed and processed silks. But in recent years, he’s been finding a creative outlet in an unexpected place: the legacy of Selena Quintanilla-Perez, the multi-hyphenate Mexican-American celebrity whose murder in 1995 catapulted her to new levels of posthumous stardom (cemented by a 1997 biopic starring Jennifer Lopez).
Boyer was 16 years old and living in Texas when Selena was shot by the manager of her fan club. In recent years, he’s become part of an Instagram-connected community of enthusiasts who collect, trade, and flaunt pieces of Selena memorabilia, from commemorative drinking cups to personal photographs and items from her eponymous fashion line. The pop star, and the Tejano music community she was an integral part of, “was a big part of my youth,” Boyer affirms. “This is something that really inspired me as a teenager—just as other artists of my same generation might reference a riot grrrl scene.”
“Ahora y Nunca,” an exhibition currently on view at SIGNAL in Bushwick, Brooklyn, brings a collection of the artist’s Selena bounty to the gallery, along with sculptures that inventively honor her memory. Camp and kitsch might be floating in the air, but Boyer is sincere about his affection for the late pop star, whose envelope-pushing, cross-border career he sees as something of a model for his own. 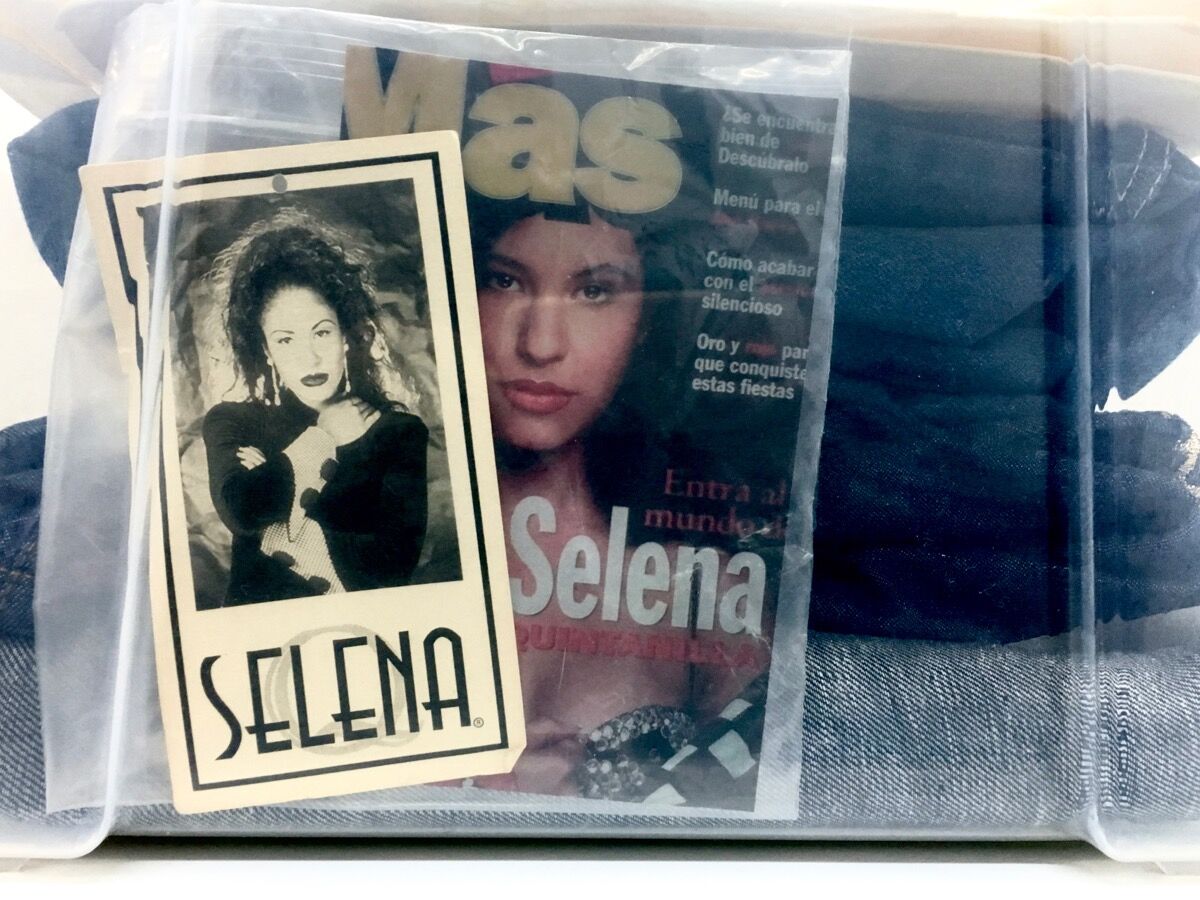 Like Selena herself—who sold branded clothes via a Texas boutique, Selena Etc.—Boyer has grown up traveling, and making work, between Mexico and the United States. He posed his exhibition as the culmination of a thought experiment: “What if Selena Etc.—and this economy it was pointing to—had gone exactly right?” What if, Boyer mused, the pop star’s shop had evolved into something more like high-end, art-world-friendly boutiques like Colette or Agnes B.?
The realization of that daydream was circuitous. “All of the fanciest, aspirational fashion lines, like Hermes and Polo, have this equestrian mystique,” he says. And so Boyer’s Selena-tribute ended up taking the form of a series of wool horse-blankets—created by weavers in the Mexican town of Teotitlán del Valle, Oaxaca—which feature silhouettes of the singer’s legs, adorned with shoes from various points in her career. In one, her sparkly footwear is based on what she wore at a concert in the Houston Astrodome. Another, more morbid, weaving replicates the costume that Selena’s wax mannequin sports at Madame Tussaud’s. That particular horse blanket is bedecked with the logo of Days Inn, the economy hotel chain where Selena was shot to death in Corpus Christi, Texas. “It’s about resurrection, or transcending death,” Boyer offers. “Selena is the ghostest with the mostest; she does a lot of work from beyond the grave.” 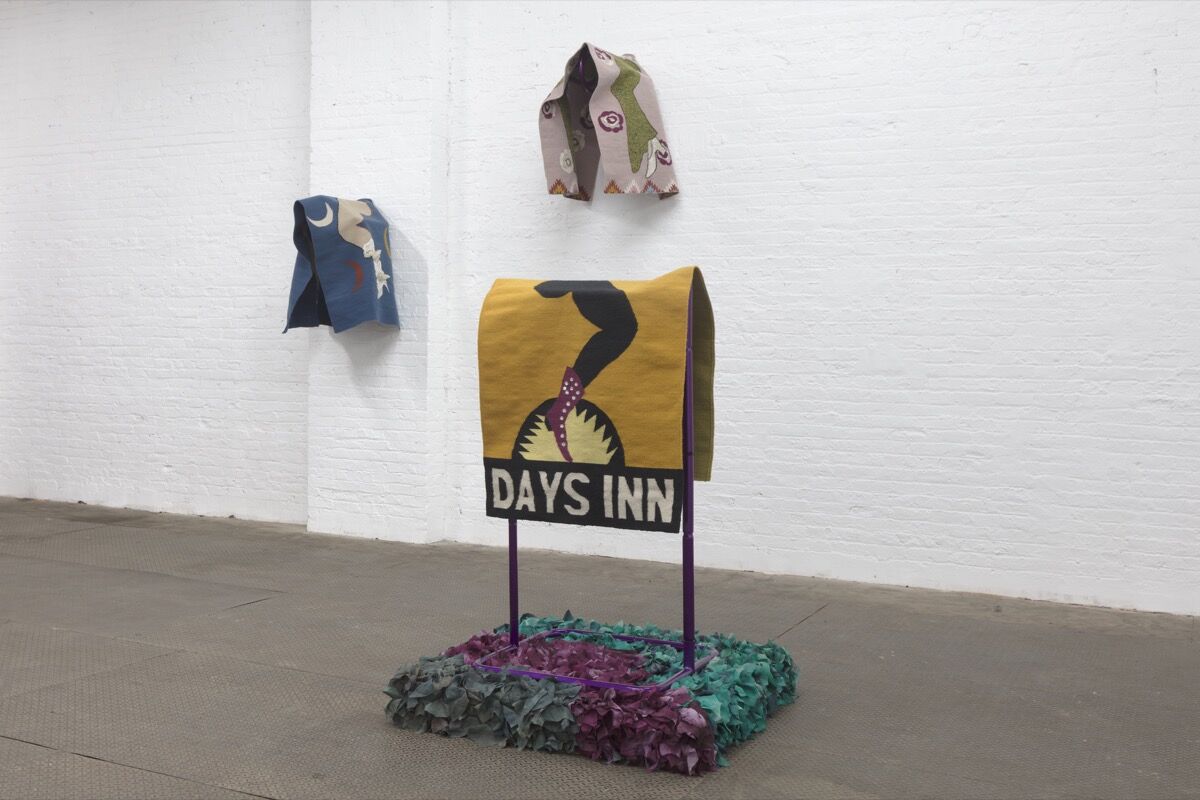 Advertisement
At SIGNAL, the series of horse blankets are displayed on purple, powder-coated racks, some of which are mounted on plinths whose surfaces are covered with tufted, dyed silk swaths, resembling the texture of a piñata.
“I imagine the sculptures as these angelic Valkyries that are flying into a situation, to make decisions on the battlefield and clean things up,” Boyer adds. “If things got really bad you could just call the ghost-army of Selenas to intervene on behalf of good.”
This might all sound incredibly esoteric and inward-facing—and it is—but the artist’s enthusiasm for Selena points to something larger than an idiosyncratic outpouring of fandom. Partly, it’s about nostalgia for a political and cultural climate where Mexico and the United States enjoyed a sense of exchange and interplay. It recalls a world in which no Donald Trump had yet arrived to deride Mexicans as “bad hombres” who are “pouring into” our country, best kept out via a fantastical wall that Mexico (or solar power) would somehow pay for. Boyer fondly remembers the 1990s in Texas, when it was possible to pass between the two countries with little more than a driver’s license, and where many thought NAFTA (passed in 1994) would be akin to “the European Union, this continental, economic solidarity.” 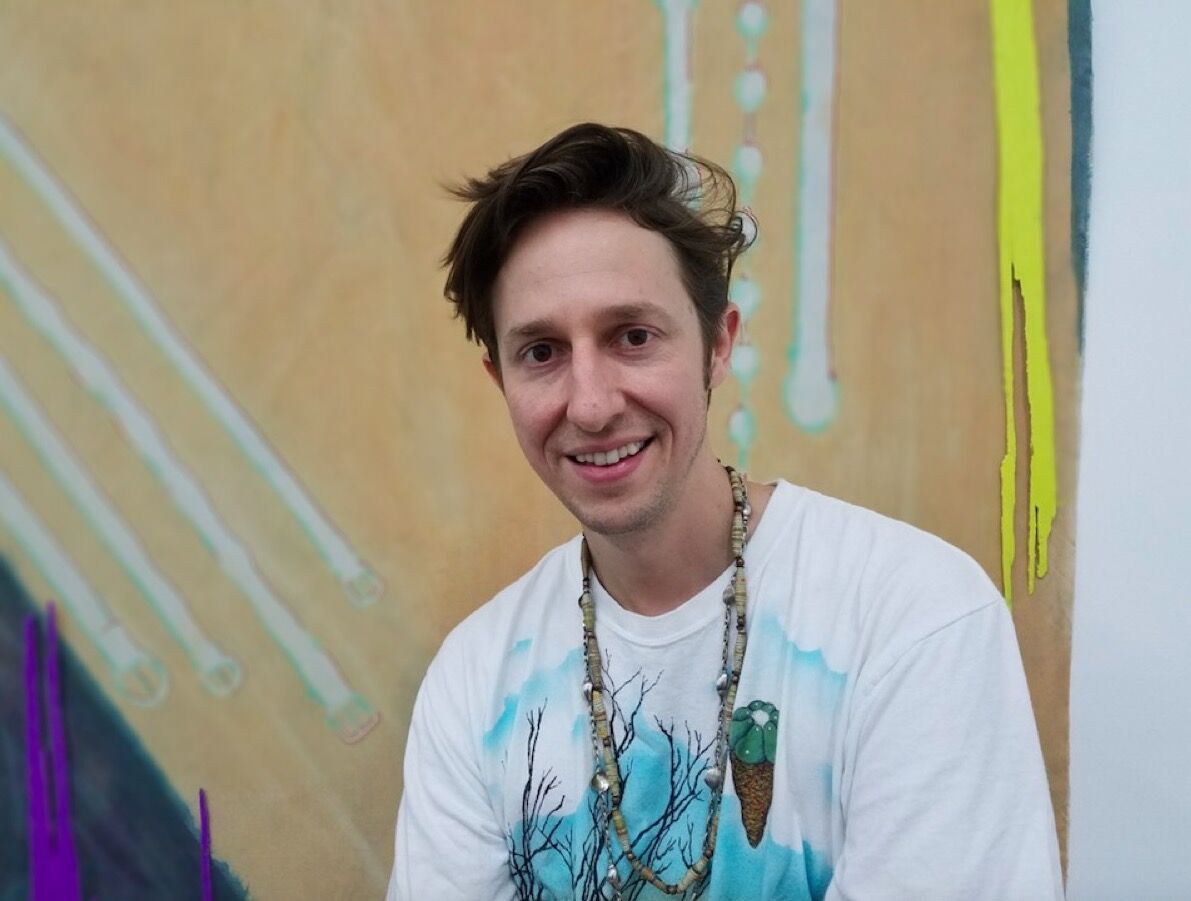 But Boyer’s show is also about the freedom to engage with what excites or moves you, independent of any anxieties about one’s right to do so. “Selena and the Selena Etc. store was producing their line in Monterrey, Mexico, and going back and forth to the U.S.,” Boyer says. “I’ve actualized this in my own life, going back and forth to Taxco and Oaxaca and producing artwork with these communities, as well as back home. It’s really liberating not to feel that you can’t do that unless you actually are Zapotec or live in a Zapotec community. Selena’s world opened up the possibility that that’s not important—you can traverse these two things, they have more in common than you think. Her way of living was an example of a new kind of person, a new kind of creative entrepreneur.”
Indeed, Selena’s legacy is a rich example of unpoliced cultural cross-pollinations. Tejano music itself was born of an intermingling of German and Czech polka with indigenous Mexican musical traditions. One of Selena’s main back-up performers, Don Shelton, was—in Boyer’s words—a “black gay leather-daddy bear” who didn’t really speak Spanish. Selena herself, he adds, borrowed from a plentiful sea of references, from Madonna’s “Truth or Dare” tour to the 1980s television show Moonlighting. In recent years, Selena’s persona has been happily borrowed by the drag community. The “ghostest with the mostest” has, in death, become a free-floating symbol: a little something for everyone.
For Boyer, that means that Selena can be a kind of portal through which he can access the unexpected: A new way to be a contemporary artist. He praises the singer’s own “photographic memory for pop culture,” her willingness to appropriate or absorb. And Boyer also revels in the ways in which she turned happenstance into minor genius. “There’s a famous story about Selena’s asymmetrically embellished bra, a signature look,” he says. “One side’s covered in rhinestones, the other only partially. The truth is, she’s making these clothes in a bus, on the road—and she ran out of rhinestones. But it becomes avant-garde in this way. When doing artwork myself—giving myself the permission to say, ‘Shit, I ran out of rhinestones’—that’s the thing. It’s an approach, a methodology.” 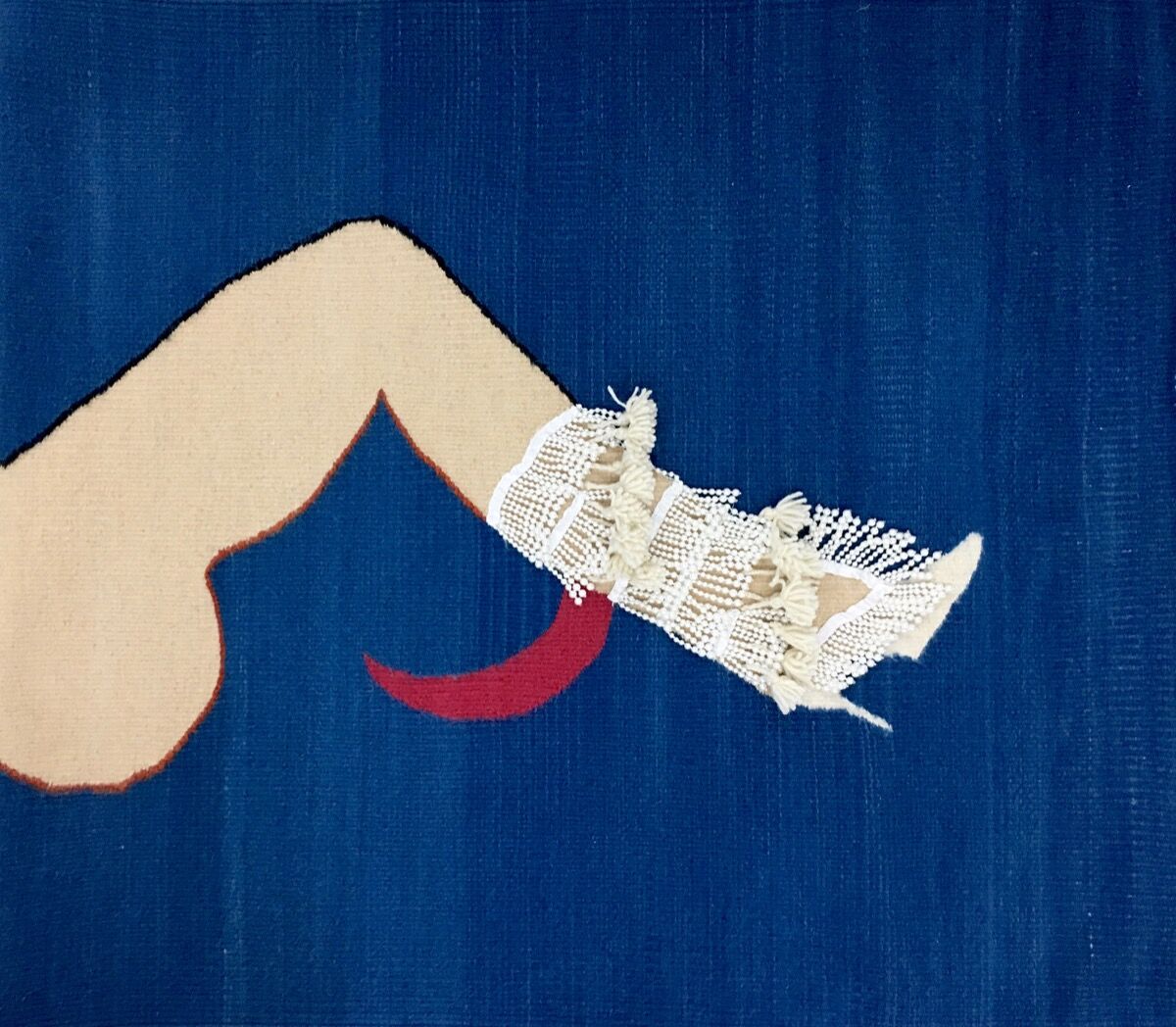 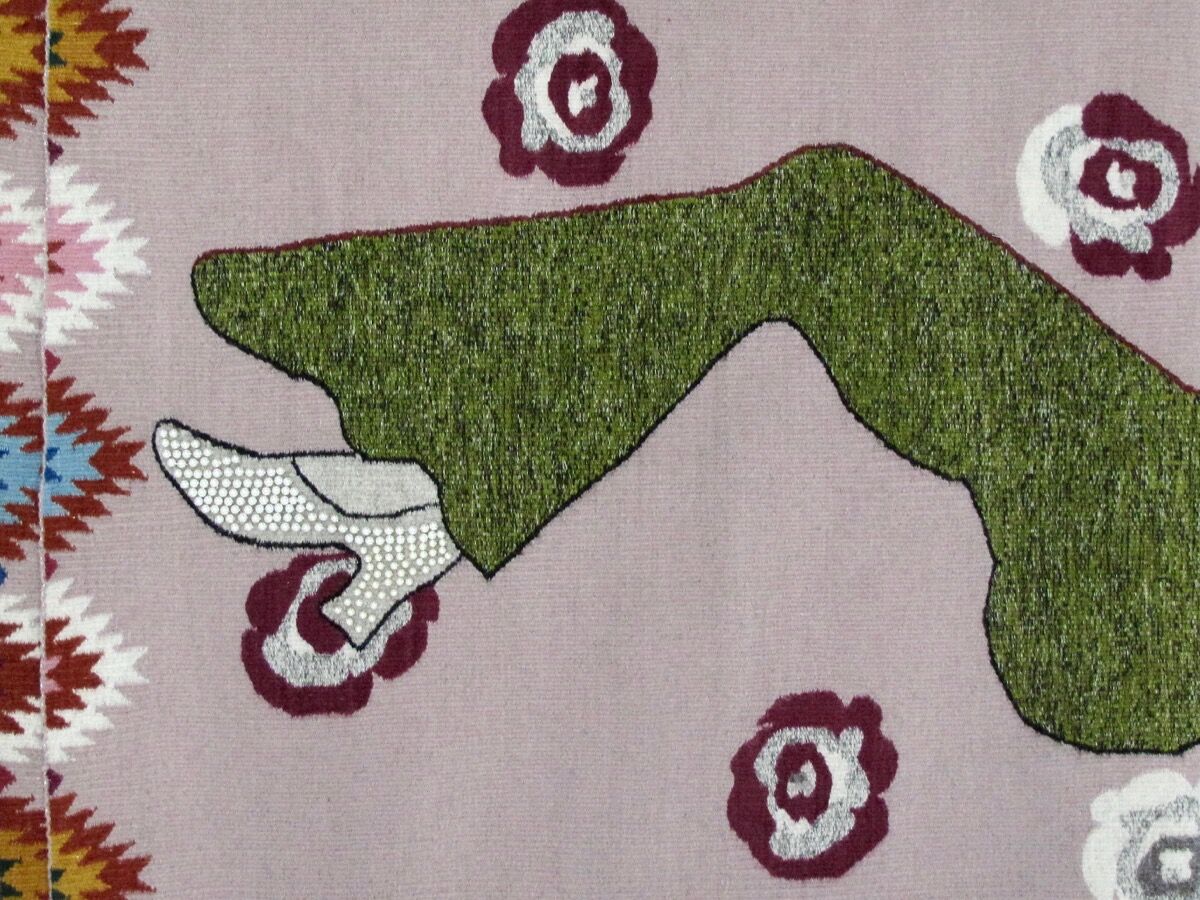 By rebooting the contemporary possibilities of Selena and her fashion business in the context of a gallery, Boyer fancies himself an occupational realist. By that he’s referring to artists, like
Mierle Laderman Ukeles
, whose conceptual practice involved laboring in often unglamorous fields—like the sanitation industry. Boyer’s not willing to go that far—“no garbage pick-up” for me, he jokes—but he’s still invested in the “imaginary economy” of his self-invented Selena 2.0.
“Considering my skills and experience I’d much rather be designing a fancy equestrian line,” he says. In a world in which Selena was still alive, “I imagine Travis Boyer would be an ideal artist for that collaboration. She’d probably be reaching out to me—instead of the reverse!”
Scott Indrisek
Related Stories