Leonardo Drew Challenges Himself and the Traditions of Printmaking 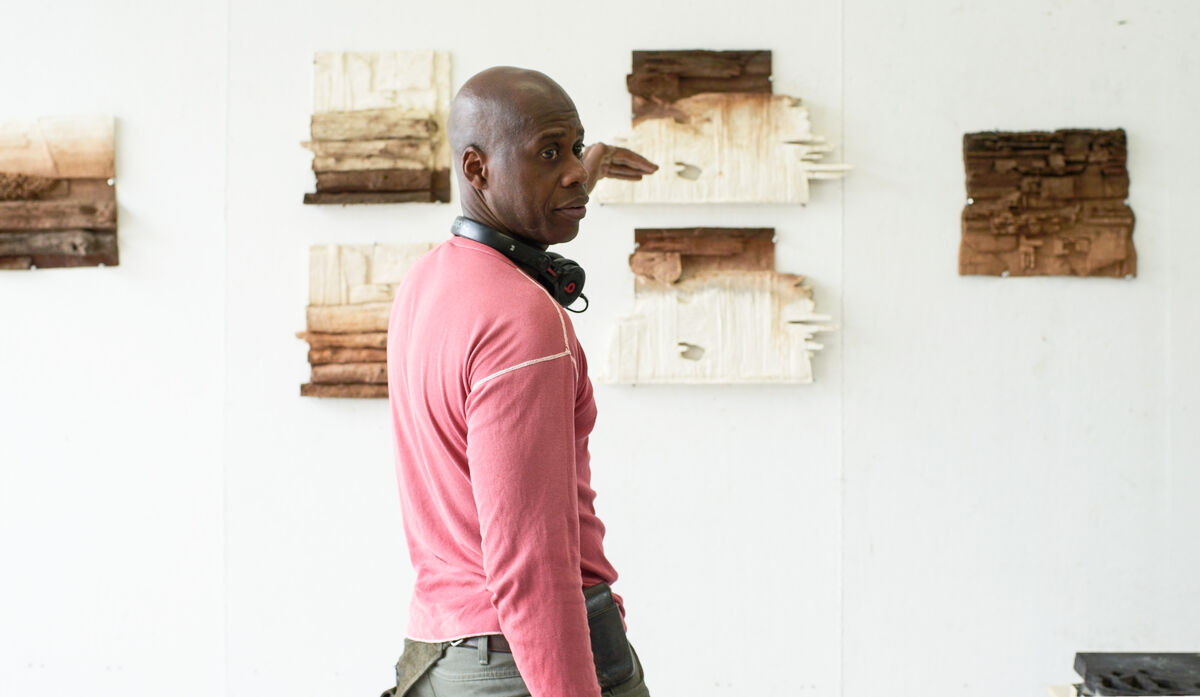 For
Leonardo Drew
, the most rewarding part of being an artist is being challenged—working endless hours consumed by impulses to push limits and attack conventions. Testament to this is his Brooklyn studio, where explosive large-scale sculptures and assemblages line the walls and traces of his diligent practice flood the industrial space. “My rewards are actually the challenges,” Drew told me during a recent visit. “[In] the end it’s about the making of the art… about the journey.” A recent journey—and a formidable challenge—goes on view this week, in a new exhibition at Pace Prints. 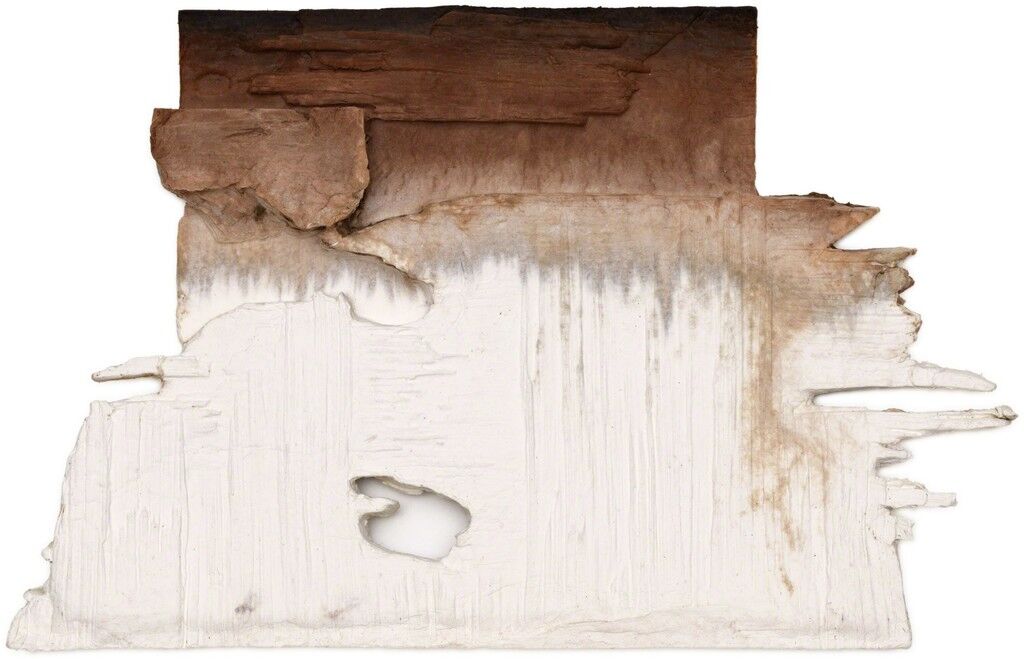 Leonardo Drew
32P, 2014
Pace Prints
Some 30 years into his artistic career, Drew is thriving. With a steady stream of exhibitions in Dallas, Helsinki, and Santa Fe slated for the coming months, he works all day, every day, out of his own volition, rather than necessity. Any concept of a work-life balance is left at the door of the Cypress Hills studio where he lives and works, located in an industrial brick building on a quiet residential street. He moved to the space in 2007, following many years in Williamsburg and Washington Heights. Drew was attracted to the neighborhood’s energy and, surprisingly, the nearby cluster of cemeteries, which seems fitting given that his works often explore decay and regeneration. The artist mentions that Mondrian’s tombstone is nearby, a little-known fact that he and a friend uncovered a few years ago. 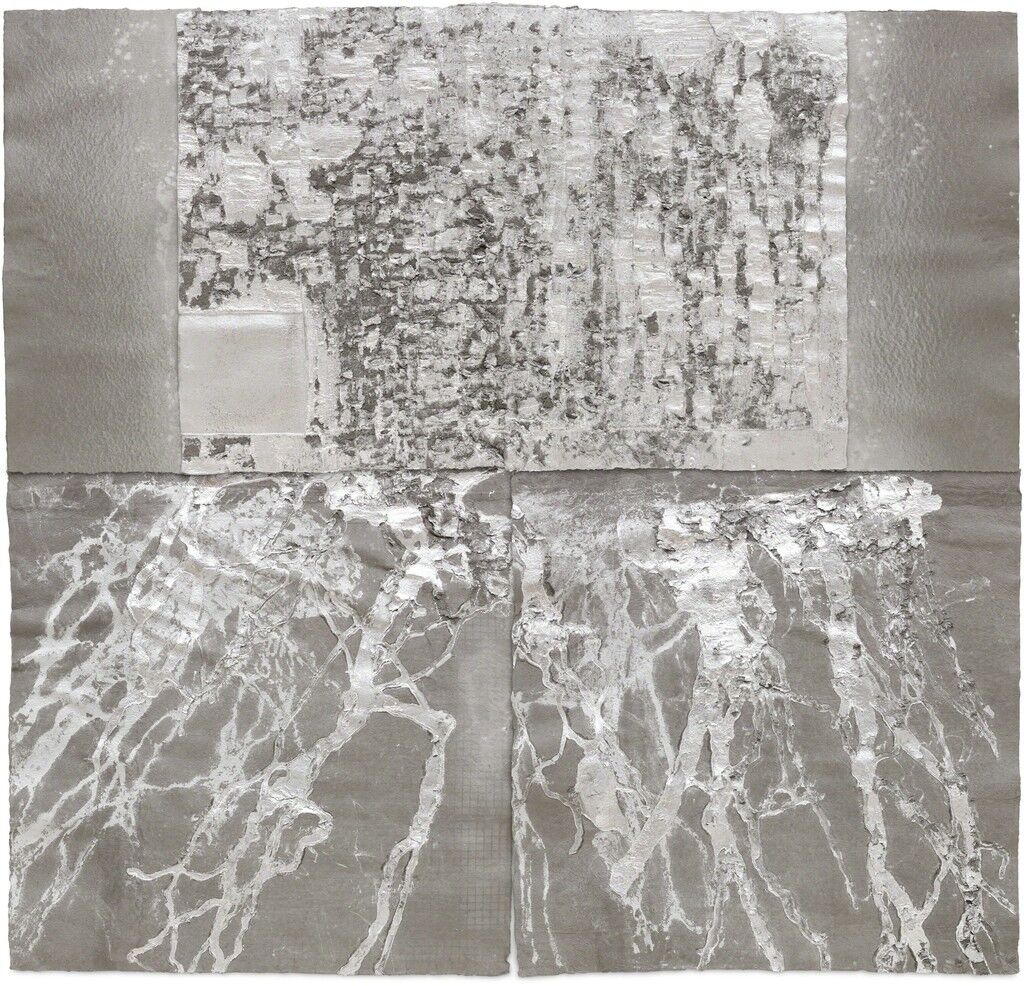 Leonardo Drew
38P, 2014
Pace Prints
Advertisement
Upon entering the studio, a pair of smaller workshop-like chambers lead to a giant, windowless room filled with sculptures in various stages of completion. The surfaces are covered with buckets of black medium, stacks of assorted wood, tarps, refuse, bins of nails and screws, and a variety of other hardware and power tools. Small swatches of various textures are hung on one wall, each one a sample of the larger, realized works. Drew greets me from upstairs and quickly dives into a frank discussion of his practice, his process, forays into printmaking, and his ideology as an artist. Simultaneously, he sits down and gets to work, rapidly applying colorful paint chips to a rectangular panel. He speaks freely and laughs often. 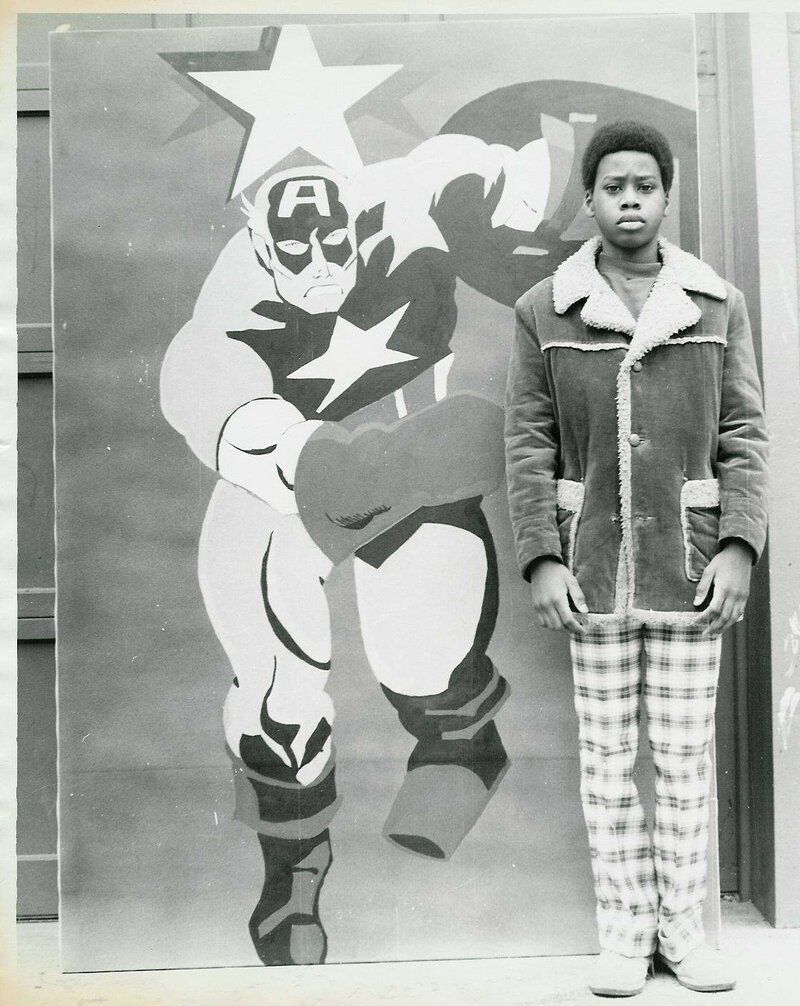 Drew’s practice traces back to his childhood. He grew up in Bridgeport, Connecticut, making art in a bedroom that he shared with five brothers. As a 13-year-old he was featured in his first exhibition, among a group of peers, a moment which is commemorated by a newspaper photograph of a young Drew standing next to a larger-than-life painting of Captain America. “I was drawing directly from television, what I was seeing,” he recalls. “And then I was introduced to Norman Rockwell and Maxwell Parrish, and I started copying their stuff. And then I graduated to Jackson Pollock. [Laughs] Once I saw Jackson Pollock, that was it. It was like: This is where I want to be.” He moved to New York for college and studied illustration at Parsons before transferring to Cooper Union, where he earned his BFA. Following art school he worked at Christie’s for two years and saved up enough money to pursue art full-time. He never looked back. 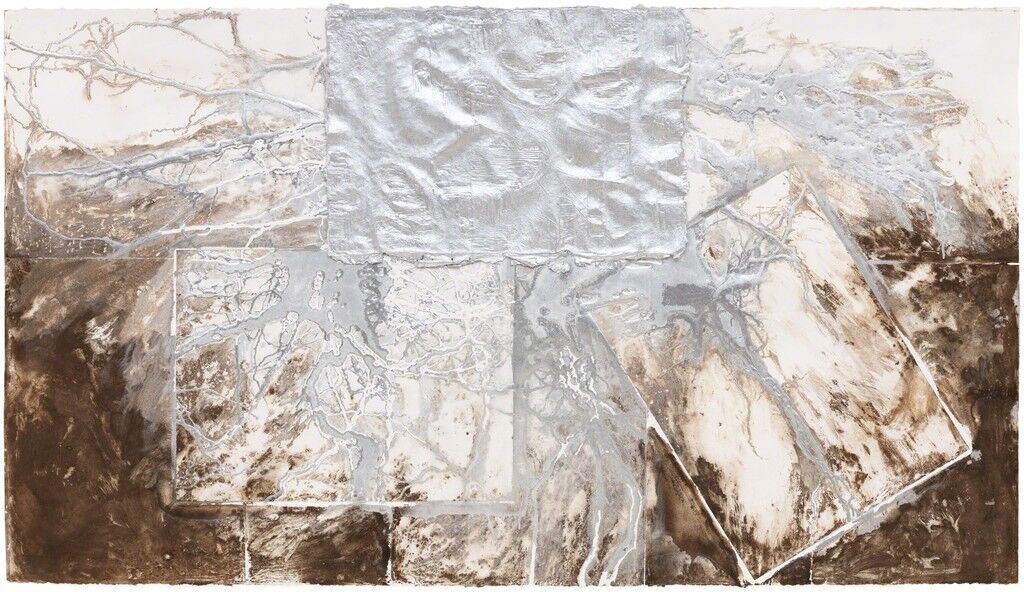 Leonardo Drew
33P, 2014
Pace Prints
“All my life has been like this very ‘monk-like’ approach to living—getting up and making art,” Drew explains. Despite being at an established point in his career, his work ethic and dedication to studio time hasn’t wavered. “I have a personality that says: Yes, you’re very social. But actually, I don’t get out that often … It’s like we all need to become reclusive at some point—in order to make our work.” And it’s at this successful stage, with a small team of assistants, that he’s able to simultaneously make art that sustains his career and art that motivates him and helps him grow as an artist. Gesturing over to a work on one side of the studio he explains, “That’s good, but it’s not the kind of work I should be focusing on, it’s not going to push me to the next place.” He motions to one of the monstrous assemblages that hangs on the wall beside him and explains, “That feeds me, it challenges.” 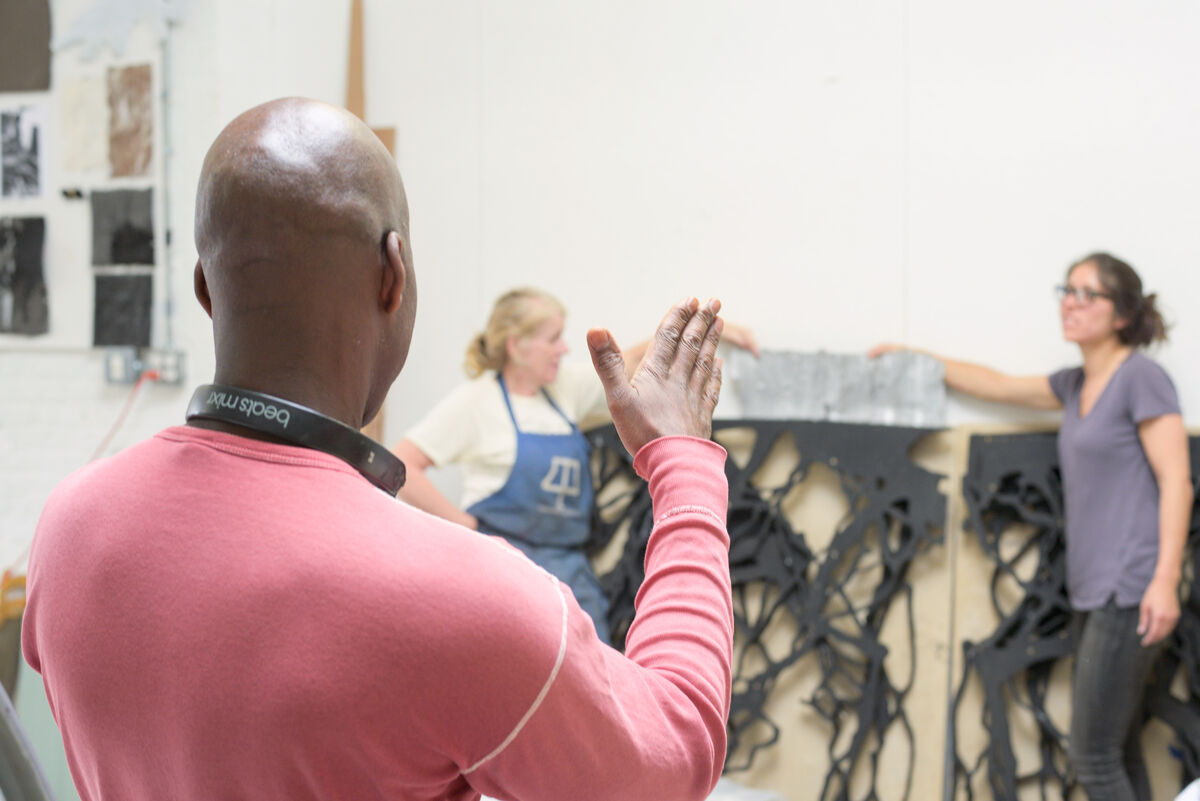 When asked where he hopes the works he’s most passionate about will ultimately live, Drew laughs and replies, “right here in the studio.” We’re surrounded by giant structures, made primarily from wood, many of which seem too large to ever leave. “Usually I’m rotating seven things at a time, just to sort of keep the juices flowing, keep the ideas going,” he explains. Drew is known for reworking and recycling his pieces, keeping certain works in a constant state of incompletion. “They call it cannibalism, I just take old work and turn it into new work,” he offers. “There’s always layering that happens because life is going on so you’re layering things that you’re experiencing ... It just keeps perpetuating itself. So there’s never a moment where there’s anything that’s unsuccessful. It’s just that it’s continuing on.” Exhibitions keep the artist on track and propel him to bring works to a state of completion. “The work has to be shown, so you have to finish. So that’s the reality,” he reasons. “It’s like the kid that’s still in the backyard and he’s like, ‘I’m still playing, man!’ It’s like, ‘I’m not ready to come in yet.’ You get called in for the next exhibition.” 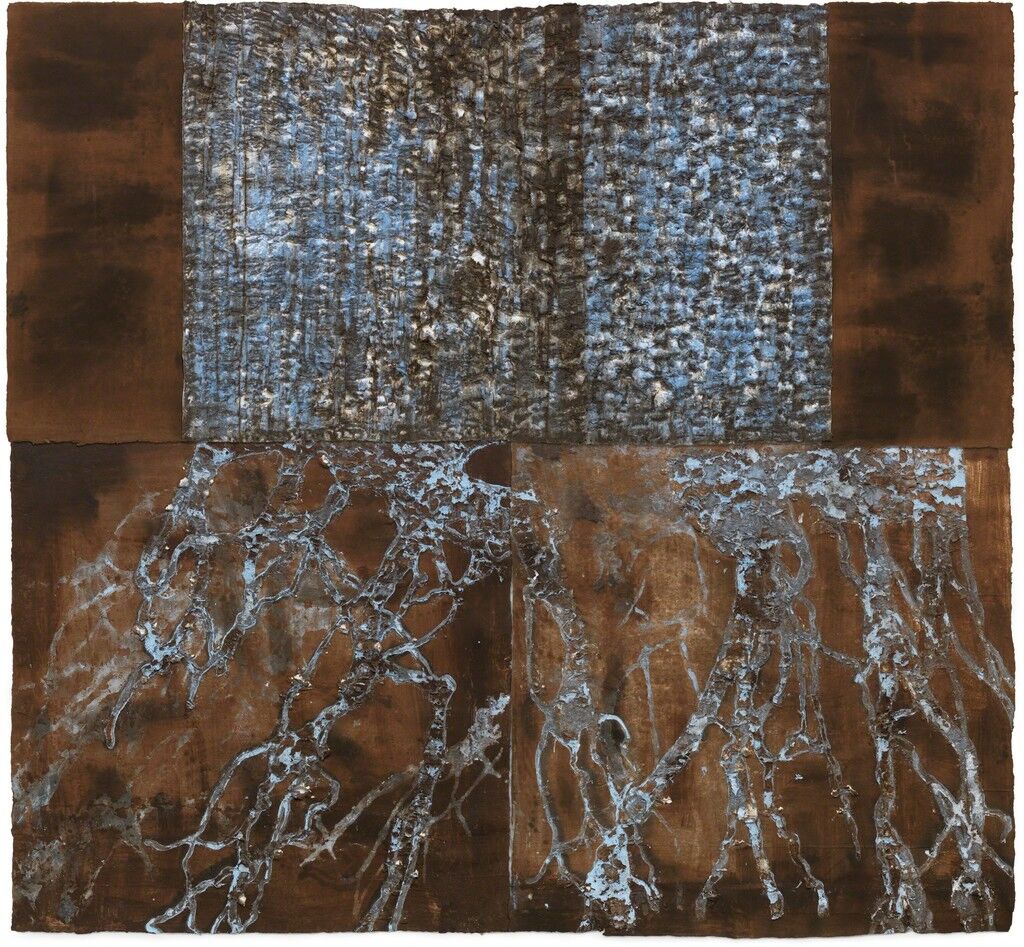 Leonardo Drew
48P, 2014
Pace Prints
The new print works debuting at Pace Prints were created at the Pace Paper studio in Gowanus, but they all began in Drew’s studio. “What I did here in the studio was I created works that we could then make molds from,” he explains. “It was almost like we were putting a puzzle together, [combining] different things that I was working on, and then putting them in the press, experimenting with it, and seeing what would come out from the other end.” The new prints, textural, undulating works printed in the artist’s characteristic earth tones, as well as shimmering pale blue and silvery palettes, present an alternate vision of Drew’s sculptural practice, translating signature elements of his large-scale work to printed media—which required experimentation and innovation. Beginning in 2012, Drew “made the rounds” at Pace Editions studios, trying his hand at the varied processes—including etching, lithographs, and papermaking—and becoming more familiar with the techniques and their potentials. “I even did some experiments on all of them just to sort of see where my language was going to fall, where my vocabulary would fall within the printmaking parameters,” he explains. “In the end, it was kind of like an epiphany... I didn’t know until it was actually happening what the work was going to look like. It was going to be actually more sculpture than traditional printmaking. And that was that.” Through an intensive, collaborative process with director Ruth Lingen and papermaker Akemi Martin, Drew developed new processes and solutions to translate his three-dimensional practice into printed media. “I didn’t realize it at the time because I didn’t know what the parameters were; I was asking to do things that had never been done before,” the artist explains. “I’ve got to give credit to Akemi and Ruth because they never said ‘no.’ I just kept saying, ‘Okay, let’s try this,’ or ‘let’s do this.’ And they kept flipping over backwards.”

Leonardo Drew
26P, 2014
Pace Prints
From smaller cast-paper works to larger prints assembled from five pieces of handmade pigmented paper, Drew challenged himself, and the printmakers at Pace Prints. Lingen told me that within his prints “there are things that we haven’t done before, mostly because he’s giving us so much raw material from his sculptural studio... He’ll send us over these crazy three-dimensional things and want us to figure out how to work with them, so we’ve taken that on as a challenge.” Regarding the larger, 95-inch works, she explains, “The way they’re made is primarily through wooden cores that are actually sort of bas-relief pieces of wood with collage materials glued to them, and then we basically ink them up and put fresh sheets of pigmented handmade paper down on them and press them while the whole thing is wet.” The pieces are then taken out of the press, and left to dry. “We’ve been making mostly editions of four for each piece, and so we’ll go through all the pieces—two bottom sections that are 48-inch squares, the core piece in the middle of the top, and then two side pieces—and what we’ll do is we hold up all the bottoms and [Drew will] say which combination he likes, and then we’ll hold the core and sides up and he’ll do the same for that.”
“The medium has changed, that’s all, but the language is still me,” Drew notes, says of the resulting prints. “What it comes down to is that the questions that I ask are not necessarily going to be the same as another artist’s. My journey is different from another person’s, so inevitably the work will definitely have to become me. The material has to become me, the situation has to become me.”
Casey Lesser
Leonardo Drew is on view at Pace Prints, New York, Feb. 27–Apr. 11, 2015.
Follow Pace Prints on Artsy.
Related Stories

The Canvas: Amid Surging Sales at Art Basel in Miami Beach’s VIP Preview, a New Class of Collectors Emerge 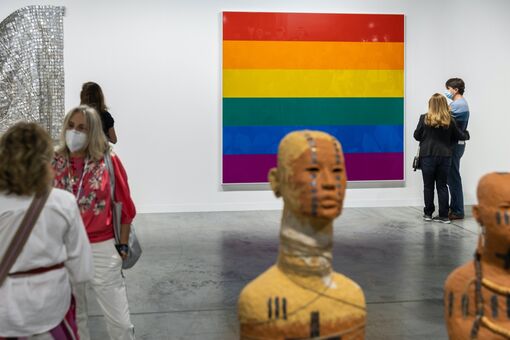 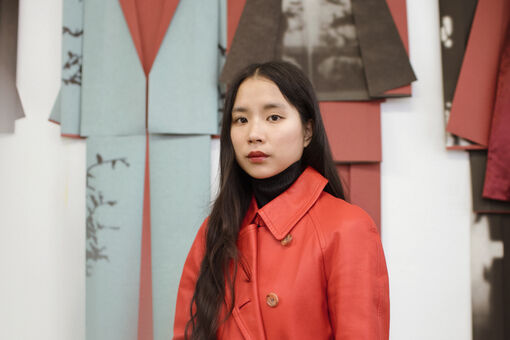 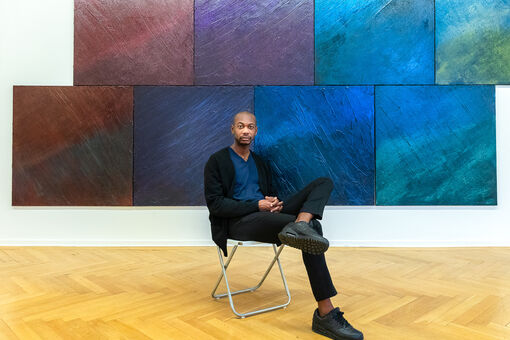