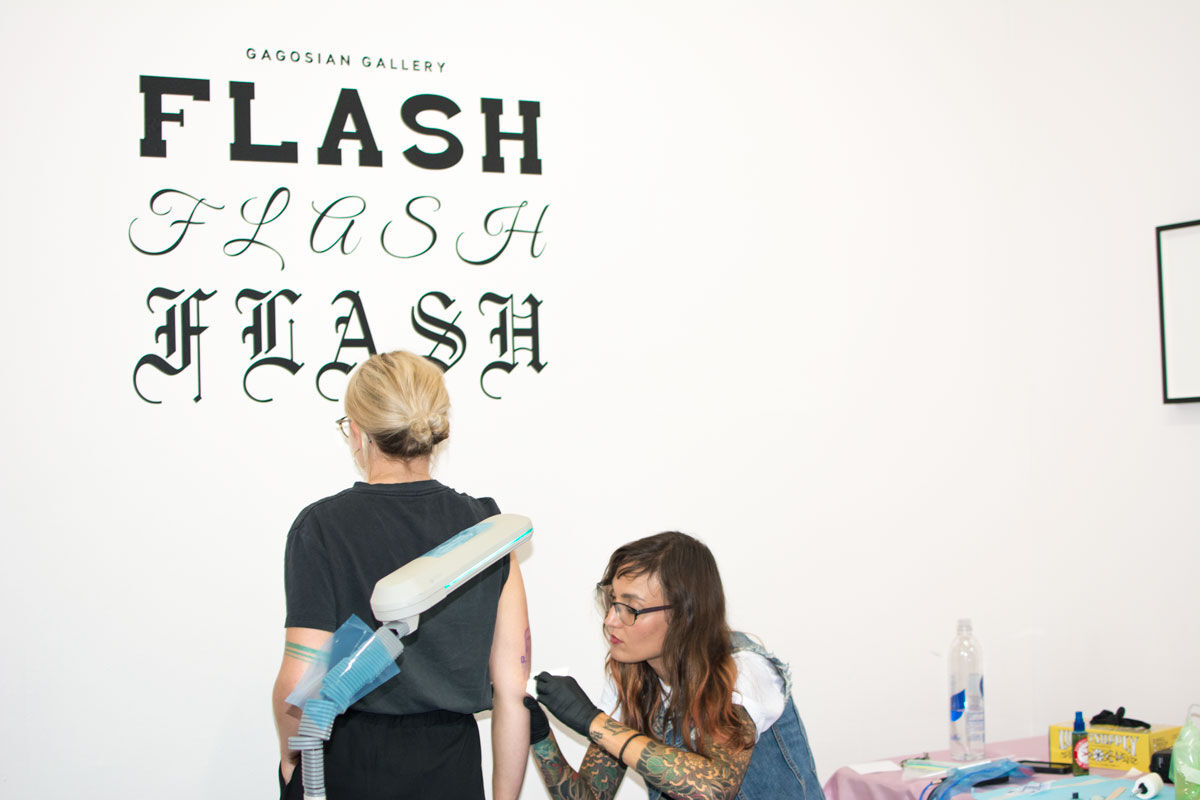 At around 6:45 on Thursday evening, two police officers entered the New York Art Book Fair (NYABF) and headed to Gagosian Gallery’s project room on the second floor of MoMA PS1. Over the past few weeks, news had spread that for Printed Matter’s increasingly well-attended convention of art-book publishers and zine purveyors, Gagosian would be mounting a fully-functioning tattoo parlor. As the cops approached the site, a sleek room with a plush pink rug and mod furniture, curator Ben Lee Ritchie Handler quickly sprang into action, pulling out his permits for the project. But when they reached the makeshift tattoo studio in the backroom, the moment of panic dissolved. One of the officers, whose toned arms were covered in tattoo sleeves, was merely stopping by to say hello to his friends, tattoo artists Fernando Lions and Gillian Goldstein—he had seen, on Instagram, that they were stationed along his beat.
Billed as “an exhibition as tattoo parlor,” the project is the brainchild of Handler, the in-house librarian and archivist at Gagosian’s Los Angeles gallery. Over the course of NYABF, Gagosian will offer permanent limited-edition, artist-designed tattoos, for $250 a pop, realized onsite by Lions and Goldstein. Interested parties have been booking appointments online, snagging time slots and one of six editions of six different tattoos, designed by artists Genesis Breyer P-Orridge,
Kim Gordon
,
Douglas Gordon
,
Max Hooper Schneider
,
Richard Wright
, and Devendra Banhart, respectively. For the faint of heart, the designs are also for sale as prints, also in limited editions of six. 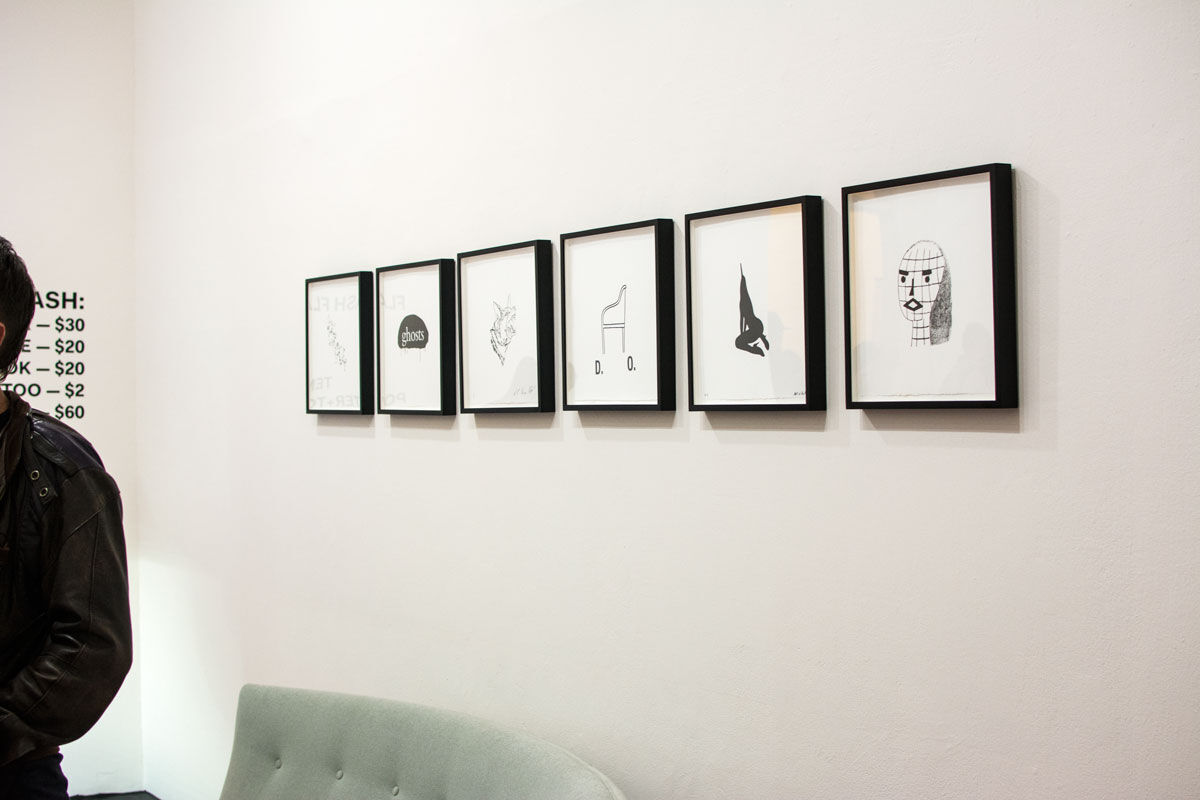 At the time of the NYPD intervention, Lions was in the process of applying the first tattoo to the forearm of Lars Byrresen Petersen, the digital director of Visionaire; simultaneously, Petersen was conducting an interview for a Facebook Live segment with the legendary trans artist Genesis Breyer P-Orridge, who had designed his chosen tattoo, which depicts a growling wolf. “I love Genesis, everything she stands for is amazing. Her motif was the best one, and then there’s a really good story behind it,” Petersen, who already has a number of tattoos, tells me. “I was nervous about the live interview part, but I wasn’t nervous about the tattooing.”
As one might expect, Handler isn’t a stranger to tattoos either. “I’ve always been a fan of tattoos in general, and I like the idea of permanence,” he tells me, “in a brutalist sense, but also like the permanent collection in a museum.” Tattoos, like works of art in a museum’s permanent collection, may or may not be visible to the public at any given moment of time. “You get a tattoo on your body, and it’s very permanent for you, it takes a real commitment, and it’s always a signifier of a moment. I think in a lot of ways, it’s a lot more difficult to get a tattoo than to spend however much money on a work of art,” Handler continues.
At the heart of the project is the idea of the flash tattoo—the familiar designs that line tattoo shop walls. “Most tattoos are open edition; flash art has been on the wall of tattoo parlors for years and years,” Handler explains. “I thought it’d be interesting to be able to say ‘I’m one of only six people—certified, proven—who have this tattoo.’” And that’s exactly what he’s done. “This is the first of its kind,” Lions says of the project. Lions and Goldstein run Flyrite Tattoo in Williamsburg, where they often give flash tattoos to customers. “People are getting something extremely limited and beautiful. I think this is a very interesting concept that seems to translate well, in terms of merging tattooing and fine art.” 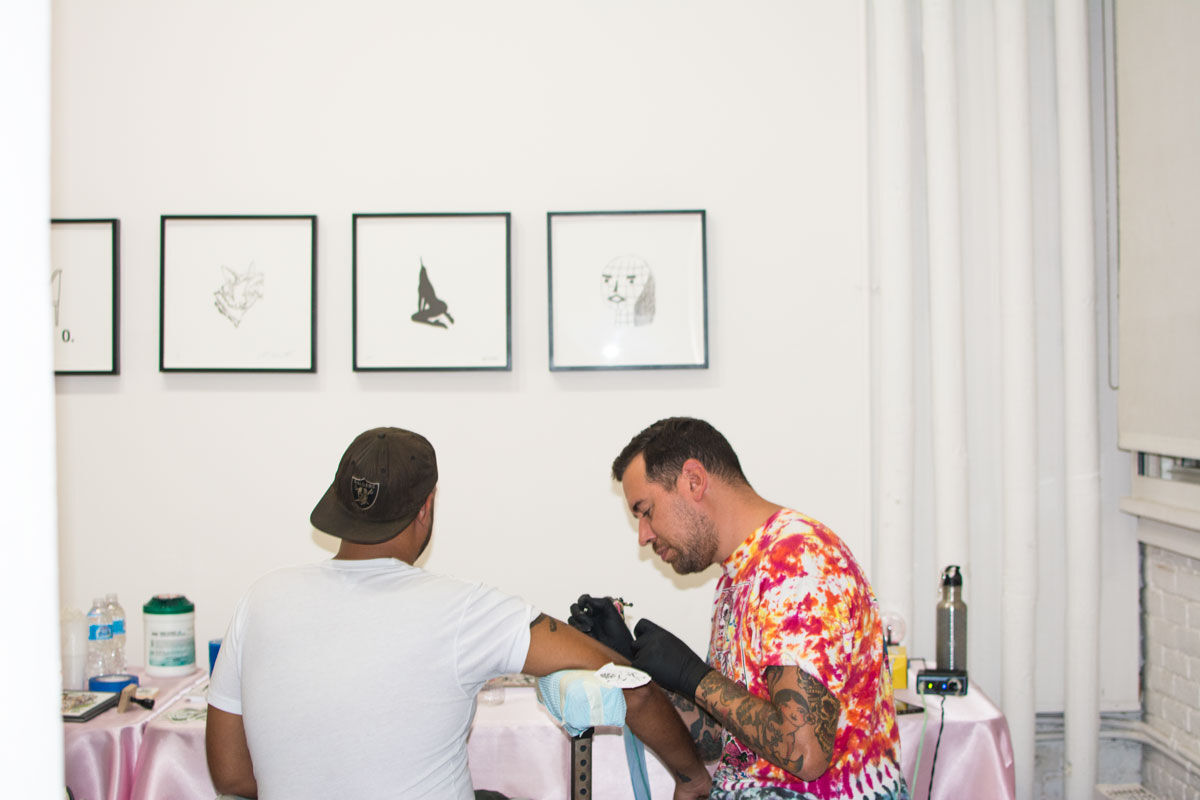 Advertisement
After Petersen, a series of others filtered in for their appointments, which lasted around a half hour each; patrons appeared to be in their mid-twenties to mid-thirties, and already sported tattoos. At the same time, a steady stream of fairgoers entered the booth, curious to see what the hype was all about. When they spotted the backroom, they poked their heads in, ogling the customers getting inked; some entered, eager to post a closeup on Snapchat or Instagram.
One customer, Jesse, who had signed up for the Kim Gordon tattoo that evening, had some reservations about getting tattooed amongst the NYABF crowd (she has one tattoo already). But upon seeing the somewhat secluded setup, she relaxed. “I was going to get a tattoo anyway this weekend, and then I saw this in an article and I thought I’d do it,” she says. “I really like Kim Gordon and I actually liked what it was as well,” she says of Gordon’s design, a line drawing resembling a grand piano paired with the letters D and O.
Erica, a young artist who estimates she has some 11 tattoos already, chose the Douglas Gordon tattoo, a dripping bean-like form with the word “ghosts” at its center. She was drawn not only to the design and how it will translate onto skin, but also to the ambience. “I like getting tattoos and part of it is the design, but the other part is the experience. I already have so many sentimental tattoos I thought, ‘Why don’t I do something that’s different?’”
“When I saw this opportunity, I realized that it was something that may never happen again, so I decided to go with it,” she adds. The novelty of the event—it’s an unexpected move by the blue-chip gallery, not to mention a logistical challenge within the context of NYABF—certainly served it well. “Everybody with tattoos likes to talk about when and where and why they got them,” Handler offers. Clearly, this line of thinking inspired dozens to partake. (At the time of writing, a handful of tattoos are still up for grabs.) In the end, the project’s strongest asset is the novel, limited-edition story that tattoo collectors go home with.
Casey Lesser is Artsy’s Lead Editor, Contemporary Art and Creativity.
Printed Matter’s New York Art Book Fair is open Sep. 16–18, 2016, at MoMA PS1, Long Island City, Queens.
Related Stories