Lisa Yuskavage Doesn’t Want to Be a “Good Feminist.” Her Paintings Are Better for It 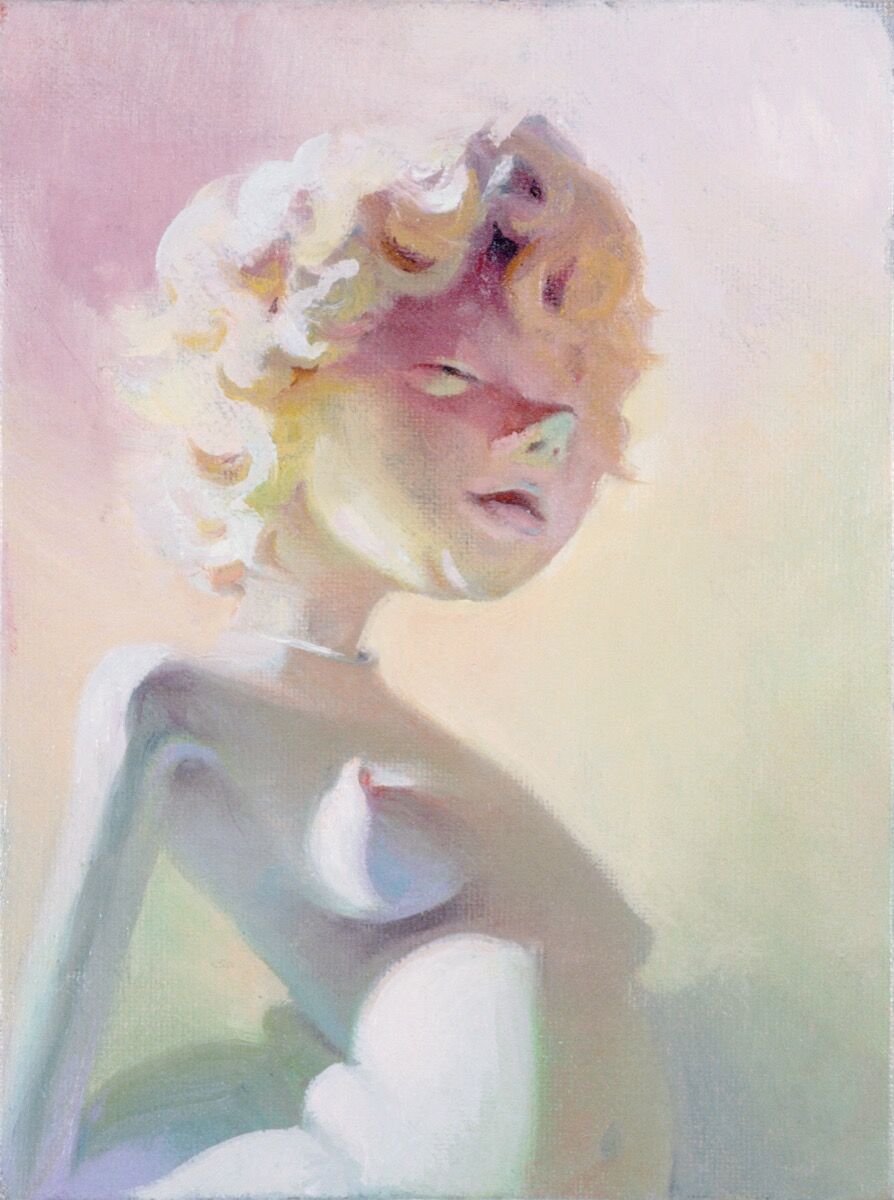 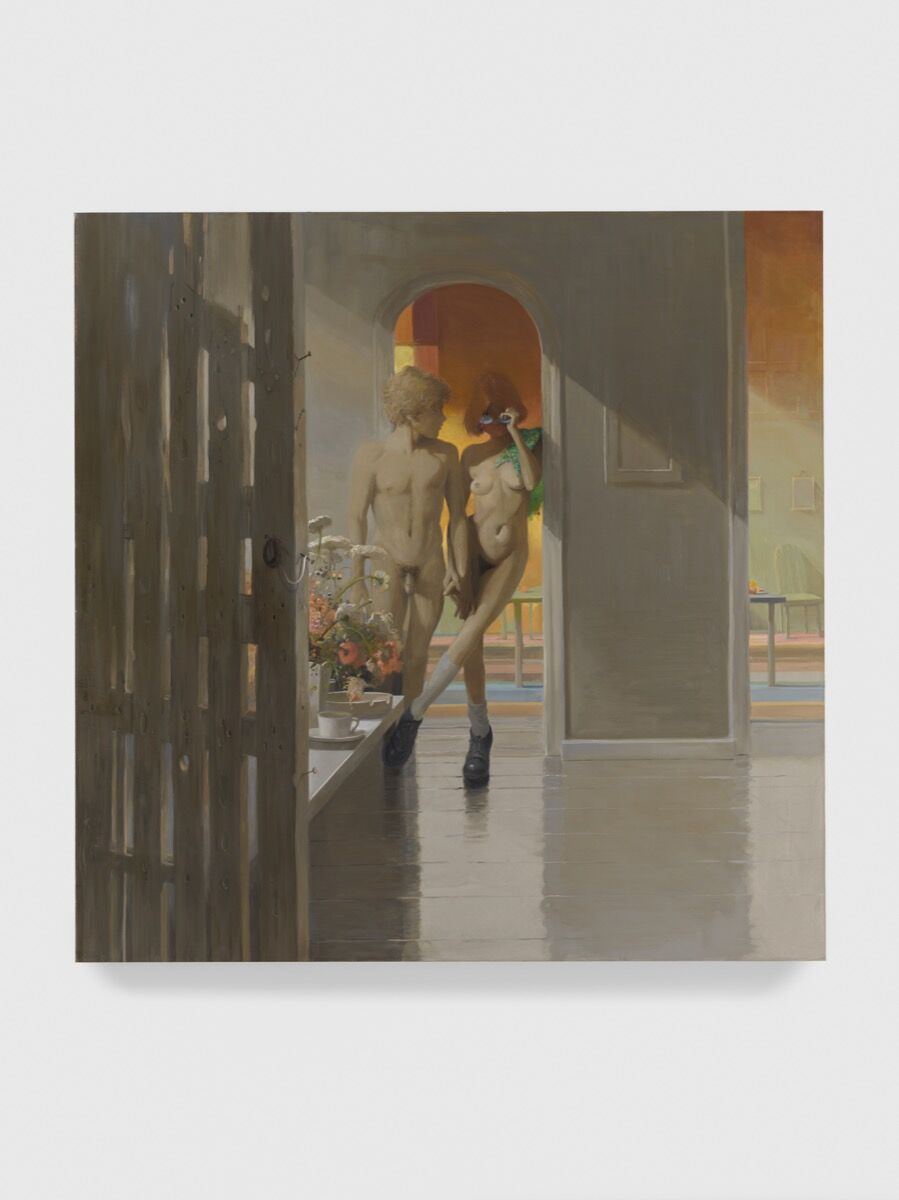 A sunny, retro haze bathes the nude figures that populate
Lisa Yuskavage
’s new paintings. In Home (2018), a couple (naked but for the woman’s shoes, socks, sunglasses, and shawl) holds hands in front of an arch that leads into a pastel dining room. In front of them sits a table covered with flowers, obscured from the viewer by a barn door. Light enters at a dramatic slant, slicing across the door and arch and creating creamy shadows on the floor. The sunlit wood slats glisten and pool out toward the viewer. The longer you look at the painting, the less you focus on the brazenly naked couple in the middle. The work becomes more about the light and space around them.
It always takes me a while to warm up to Yuskavage’s paintings, and this one is no exception. The nudes that she’s painted since the early 1990s—for which she’s become famous—often possess doll-like bodies with cute button noses and wrinkle-free skin. (Around the same time, painters
Elizabeth Peyton
and
John Currin
—a fellow Yale University graduate and one-time roommate of Yuskavage’s—were also embarking on new brands of figurative art.) In Home, the lean, toned female figure gazes seductively at the viewer, tilting her sunglasses at us. My gut reaction, each time I’ve seen a show of Yuskavage’s, is to wonder why we still need such objectifying paintings of nude women—no matter whether the source material is real, imagined, or photographs of pin-ups. Who really has anything new to say about the subject? 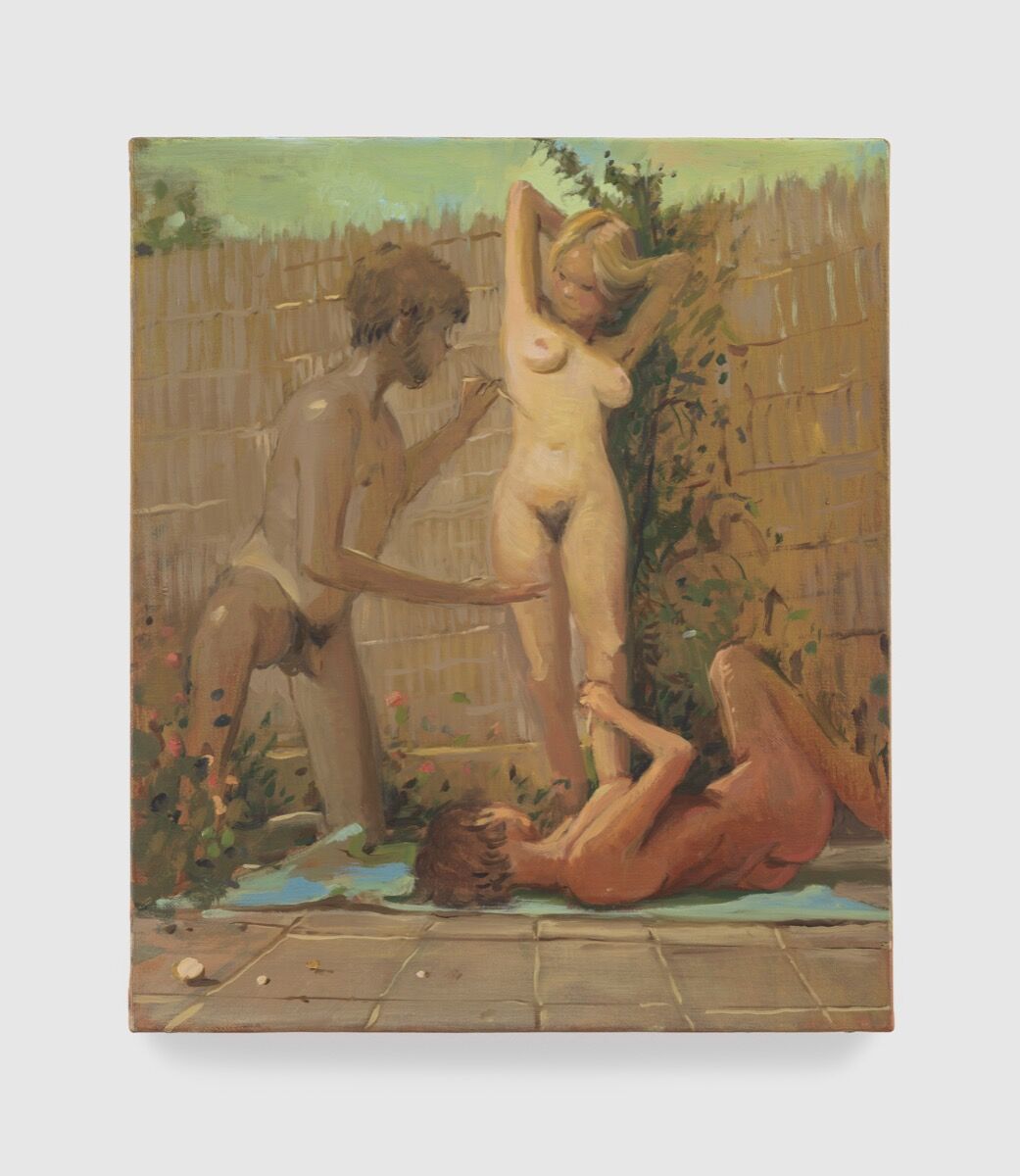 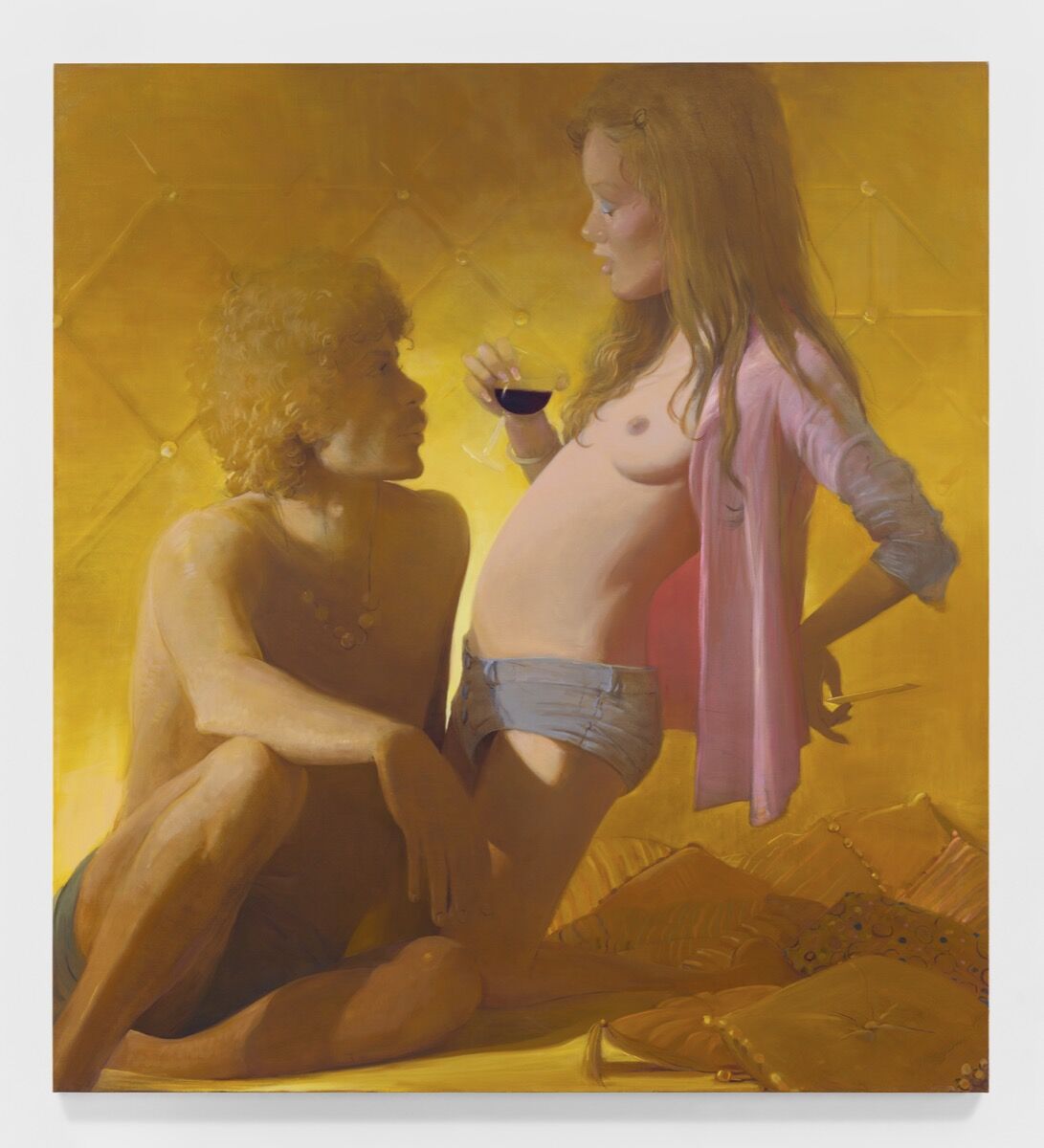 I’m not convinced that Yuskavage’s paintings are countering stereotypes about women, or helping any feminist program. (To be fair, when she speaks about her work, she frequently focuses on her process, not her politics.) Indeed, they connect less to our contemporary world than to some nostalgic, gold-lit version of the 1970s, with its reverence for bad taste: giant necklaces on a man’s hairy chest, beaded panties, scenes that seem cribbed from dirty magazines. The longer I look at these paintings, though, the more I allow myself to get caught up in these deeply bizarre fantasy worlds; the paintings’ weirdness, and their divorce from reality, become their true strengths. Yuskavage’s bodies—soft and sketchily defined—are often beside the point.
This fall, David Zwirner is mounting nearly 100 Yuskavage paintings across two separate gallery spaces—over 90 small-scale works at its West 19th Street location, and, in the gallery’s East 69th Street townhouse, eight large-scale ones. During a recent press walkthrough, Yuskavage underscored her interest in intimacy—not just sex—in terms of both her paintings and how they’re presented. That’s why she chose Zwirner’s Chelsea location (a classic, slightly impersonal white cube) to hang her more modest canvases, saving the larger canvases (some more than 6 by 6 feet) for the uptown gallery, with its fireplace, bookshelf, and spiral staircase.
Yuskavage connected her interest in intimacy to more formal concerns. She said that the same language with which we discuss two romantic partners—hot and cold, horizontality and verticality, near and far, in conflict or harmony—pervades her thinking about color, composition, and painting in general. There’s “nothing stronger in a painting than the center of a square,” she said. In Home, the couple’s clasped hands are positioned in the middle of the work, making that bond the painting’s major focus. 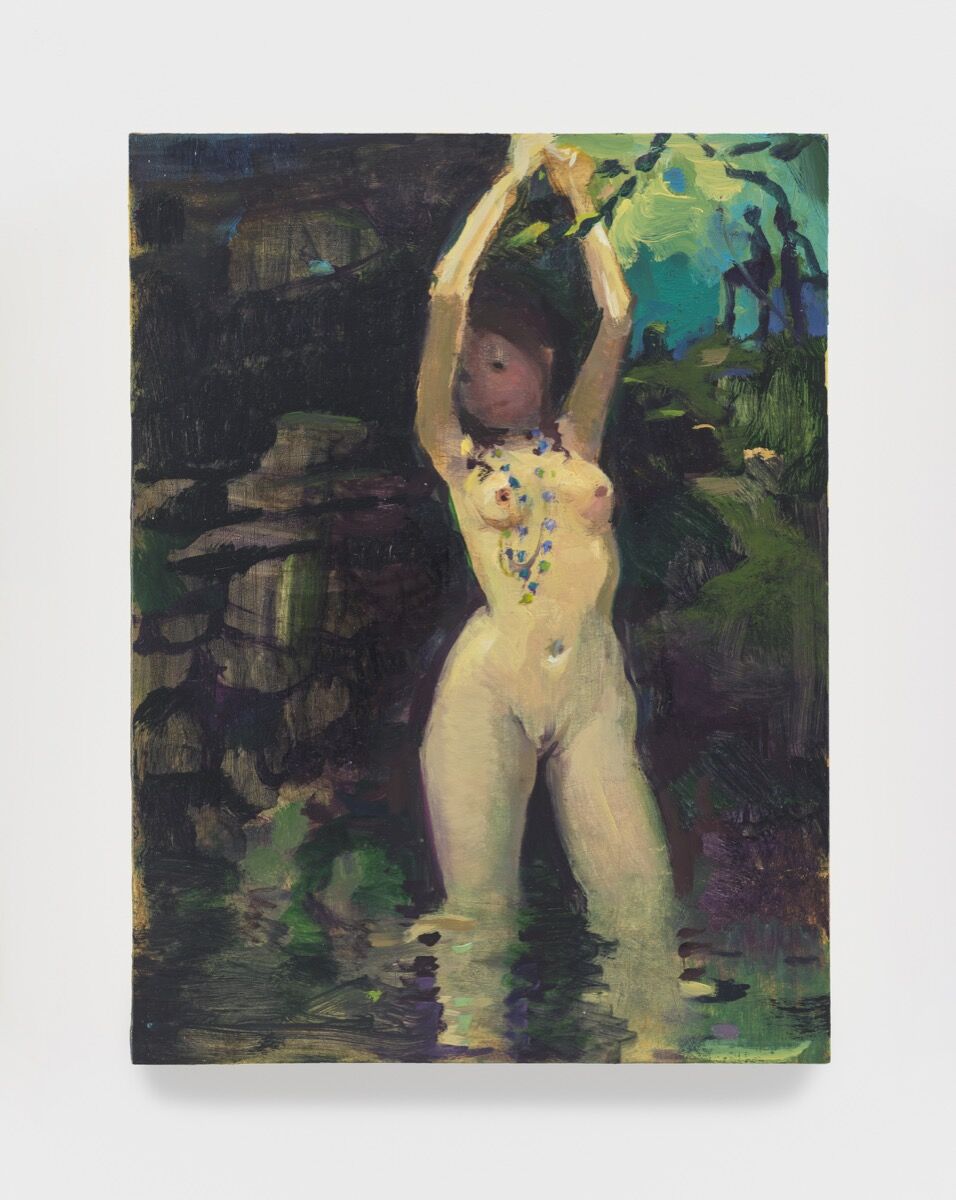 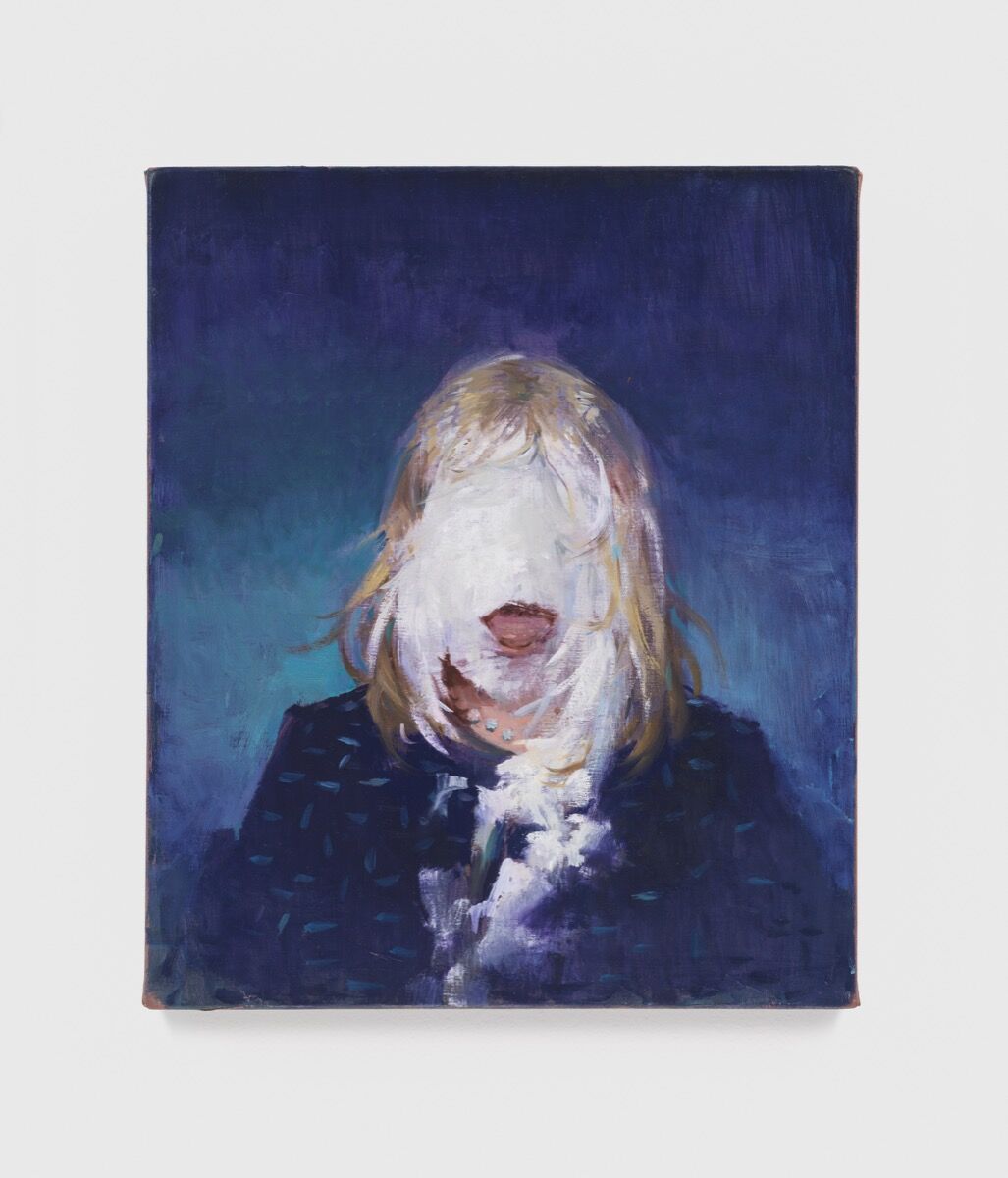 Advertisement
Yet look beyond the work’s center, and odd details abound: An ashtray is out of proportion to a tea cup, the man is missing a right foot, and two tables in the background appear to merge together into one. Yuskavage said that the barn door in the painting hails from a Franz Kafka story (“A Country Doctor”), in which it serves as a kind of opening to the id; by unlatching the barn door for the viewer, Yuskavage lets us into a tangled unconscious.
Invoking Kafka, Yuskavage indicated her strong interest in storytelling. Even her small paintings offer rich narrative possibilities. One small 8.75-by-8-inch study, Nest (2012), for example, holds enough character and setting for at least a novella. In the foreground, a pregnant woman stands with her face obscured by dark, swirling paint. She’s naked but for a striped scarf and mittens. Behind her, another woman reclines atop two long wooden rods, wearing only a green scarf and a high green sock. Beyond stand two women fully covered in long skirts and long-sleeved shirts. (Many of Yuskavage’s characters make wacky, extreme fashion choices: Often, it’s either beaded panties or conservative peasant garb.)
In the background rises a craggy mauve mountain, while the shape of a cross emerges from the grassy hill. The bucolic setting makes the painting feel historical—except, of course, for the unidealized nudes. Yuskavage accentuates the pregnant character’s line of stomach fuzz, leading down to dark pubic hair. She doesn’t glamorize the pregnant body. Half Heidi, half Hustler, the painting offers little rationale for how these women ended up in this place, or how this world actually functions. A moon in the top right corner of the painting and the dreamy hues of the backdrop suggest some kind of mysticism at play. 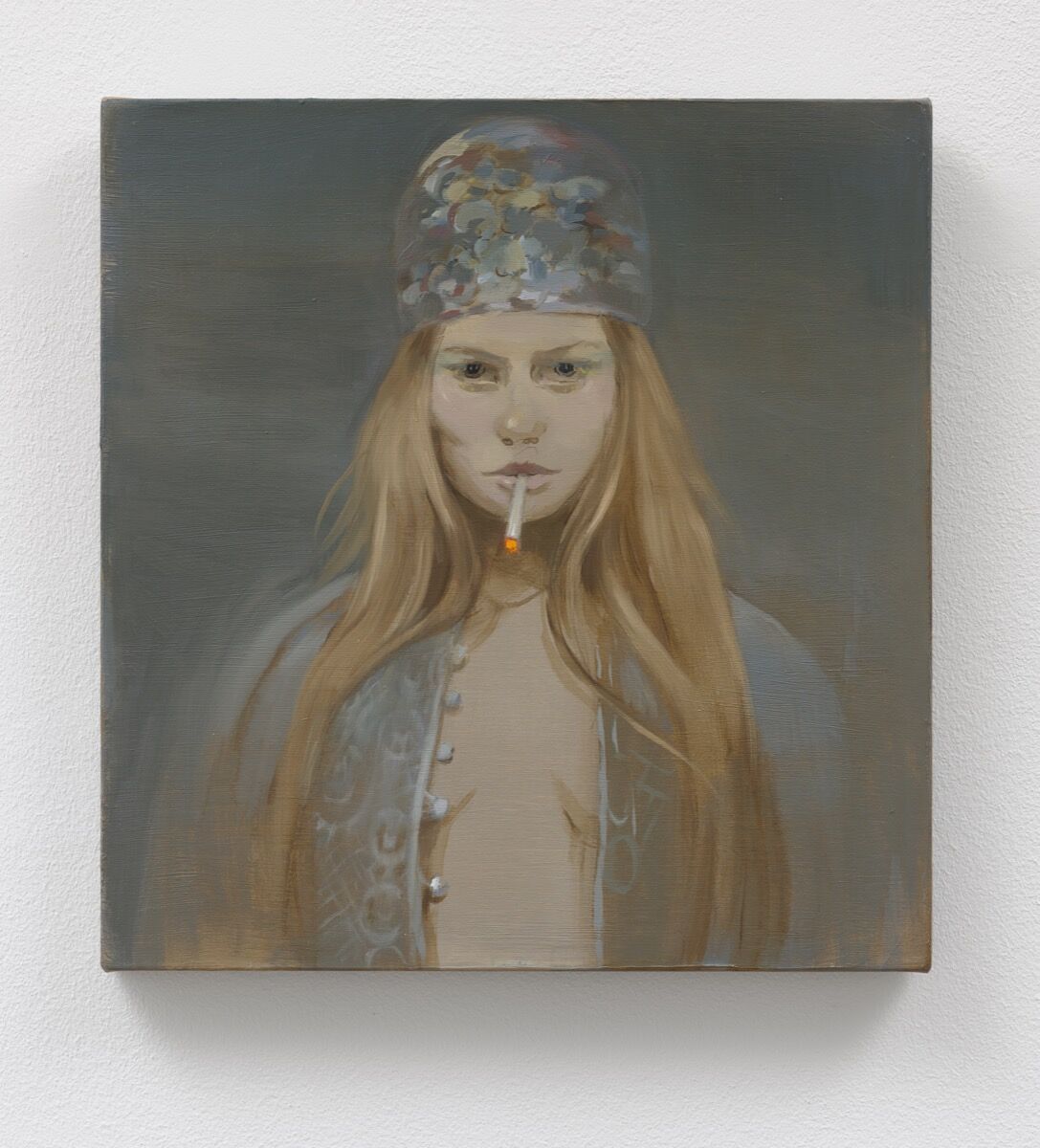 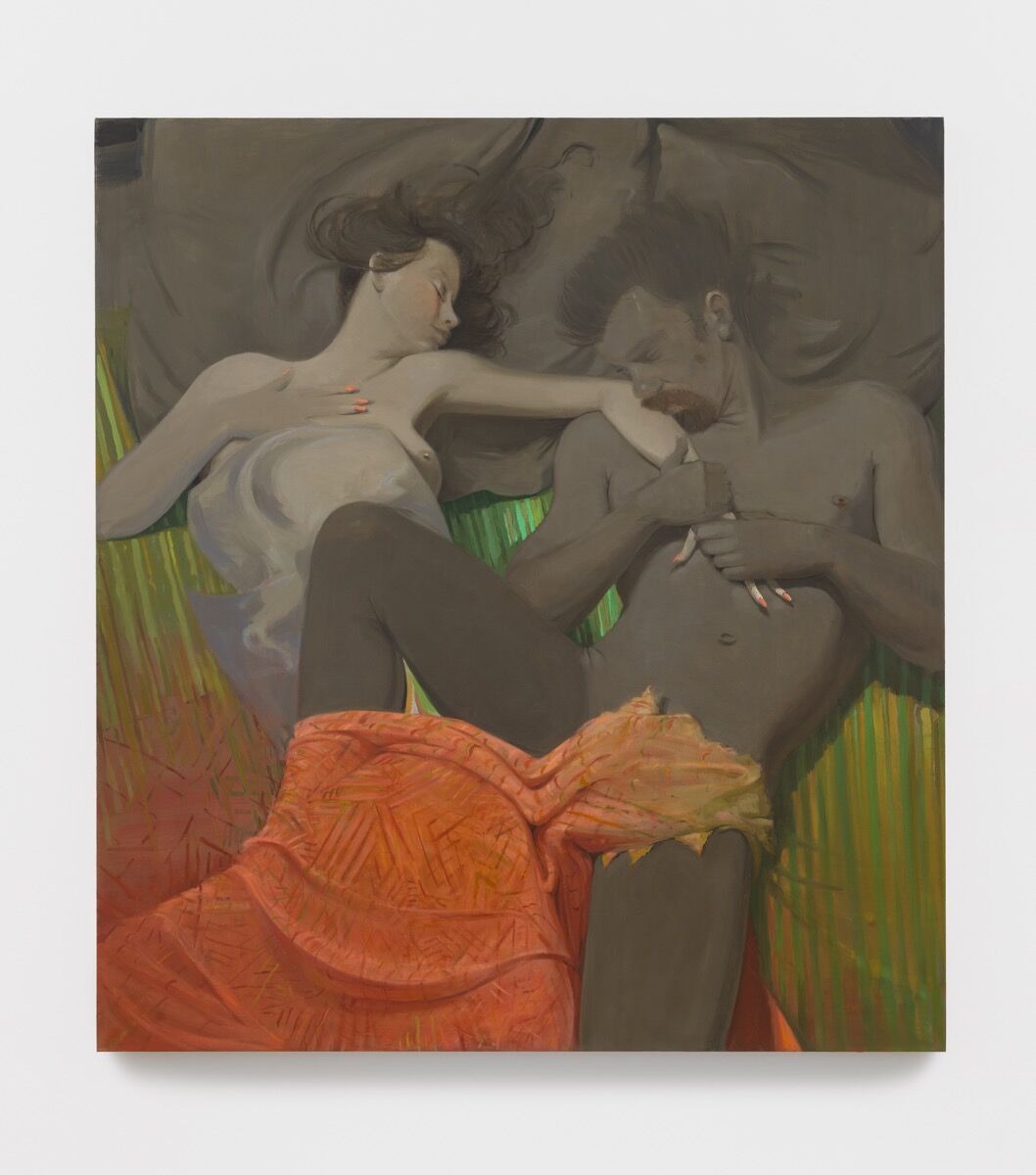 Yuskavage’s source material itself has ranged from the imaginary to the authentic. In the early ’90s, she said, her work was “pure invention.” Around 1996, she began basing her figures on sculptures or maquettes she created in her studio beforehand. She briefly used models from Penthouse, then moved on to photographing people she knew: friends, waitresses, and baristas people her pictures from that time. For a few small works from 2000 (Northview Afternoon; Talia Reclining; Northview Peasant Shirt), Yuskavage photographed a group of young women at a suburban home—reclining on a couch, lifting a shirt, sitting nude in a chair—and painted from those pictures.
While speaking about her work at Zwirner, Yuskavage offered an enlightening anecdote regarding the fraught gender politics in her work. She discussed visiting a magazine shop on 11th Street, scanning Penthouse for inspiration. “This guy comes over to me and said, ‘Are you doing research?’ Because of course I’d be doing research. I was a woman,” Yuskavage recalled. She answered with brash confidence: “I said ‘I’m doing whatever you’re doing.’ I didn’t want to lose the right to be a creep. I want the range. I don’t just want to be a good feminist doing research.”
Being a “good feminist” isn’t interesting to Yuskavage—her practice is too multifaceted for such a classification. Consider her 2016 painting Stoned, on view at Zwirner’s downtown venue. It presents one of Yuskavage’s most potent characters—a pale woman in a gray, unbuttoned jacket and flowered cap emerging from a gray background. She stares directly at the viewer, lit cigarette pressed between her lips. Her sex appeal is central to the work, certainly. But she also couldn’t care less what you think.
Alina Cohen
Related Stories 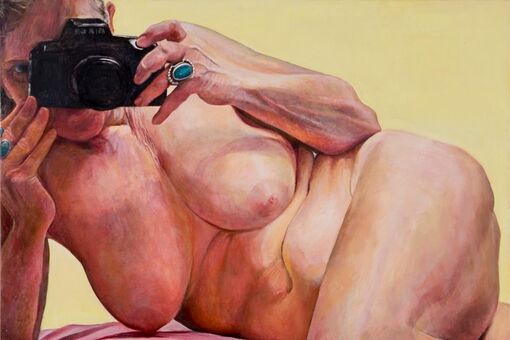