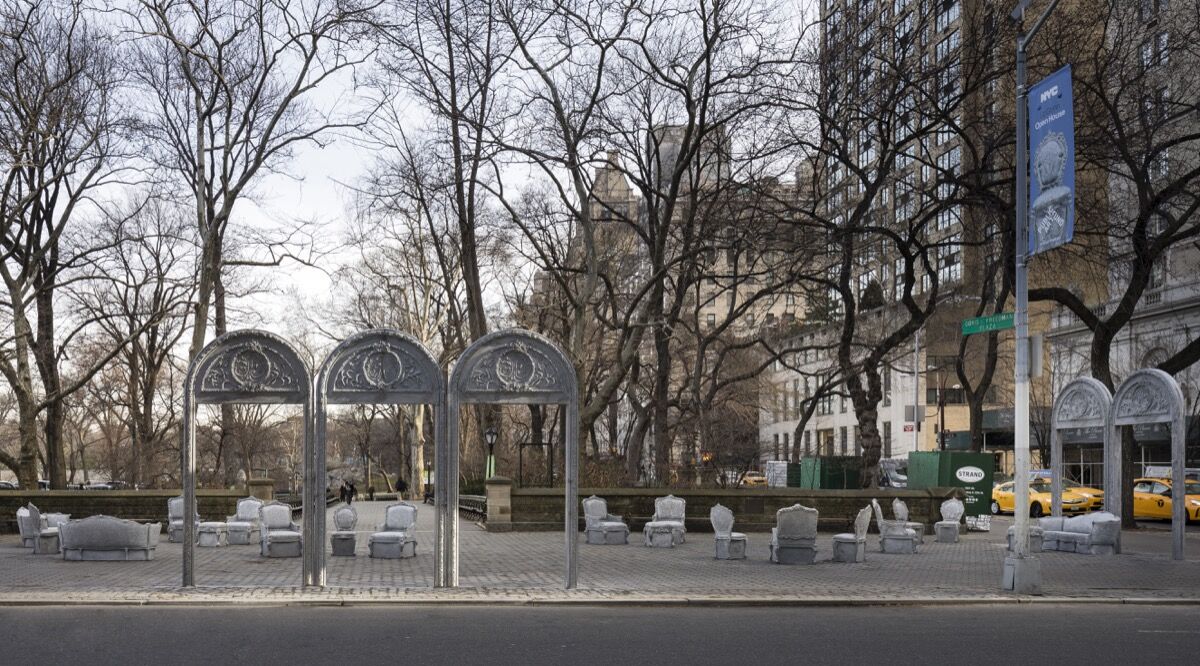 Central Park was designed in 1858 as a place where New York’s social classes could mingle in idyllic surroundings, a democratic experiment. The Gilded Age mansions that sprung up adjacent to the park along Fifth Avenue, however, were anything but.
Well-born financier William Whitney commissioned the architect Stanford White to furnish his home at 871 Fifth Avenue with a new ballroom, completed in 1901, that could host 1,000 of New York’s elite for an annual party, including the Astors, the Vanderbilts, and the Morgans.
“This was the first of its kind built just to be used as a ballroom once a year, not doubling as a gallery or drawing room,” says the artist
Liz Glynn
, who is turning this extravagant interior inside out in her Public Art Fund exhibition “Open House,” beginning March 1st in the plaza at the 60th street entrance to the park.
There, eight blocks south of where the now-demolished mansion once stood—and just four blocks north of another gilded interior in the Trump Tower, where people have been flocking in protest—Glynn has installed 26 cast concrete sculptures that create what she calls an “open-air ruin” of the ballroom. The installation poses questions about just who has access to space, then and now.
Five massive archways, based on the dimensions of the ballroom’s windows, architecturally frame a “room” and, like Roman gateways, invite people in. Replicas of sofas, chairs, and footstools modeled on Whitney’s Louis XIV-style furniture are scattered within the arches in social configurations.
“They are copies of copies,” says Glynn, explaining how White bought antiques in Europe and had a fabricator in New York knock off multiples (in keeping with the Gilded Age taste for European patina and pedigree). 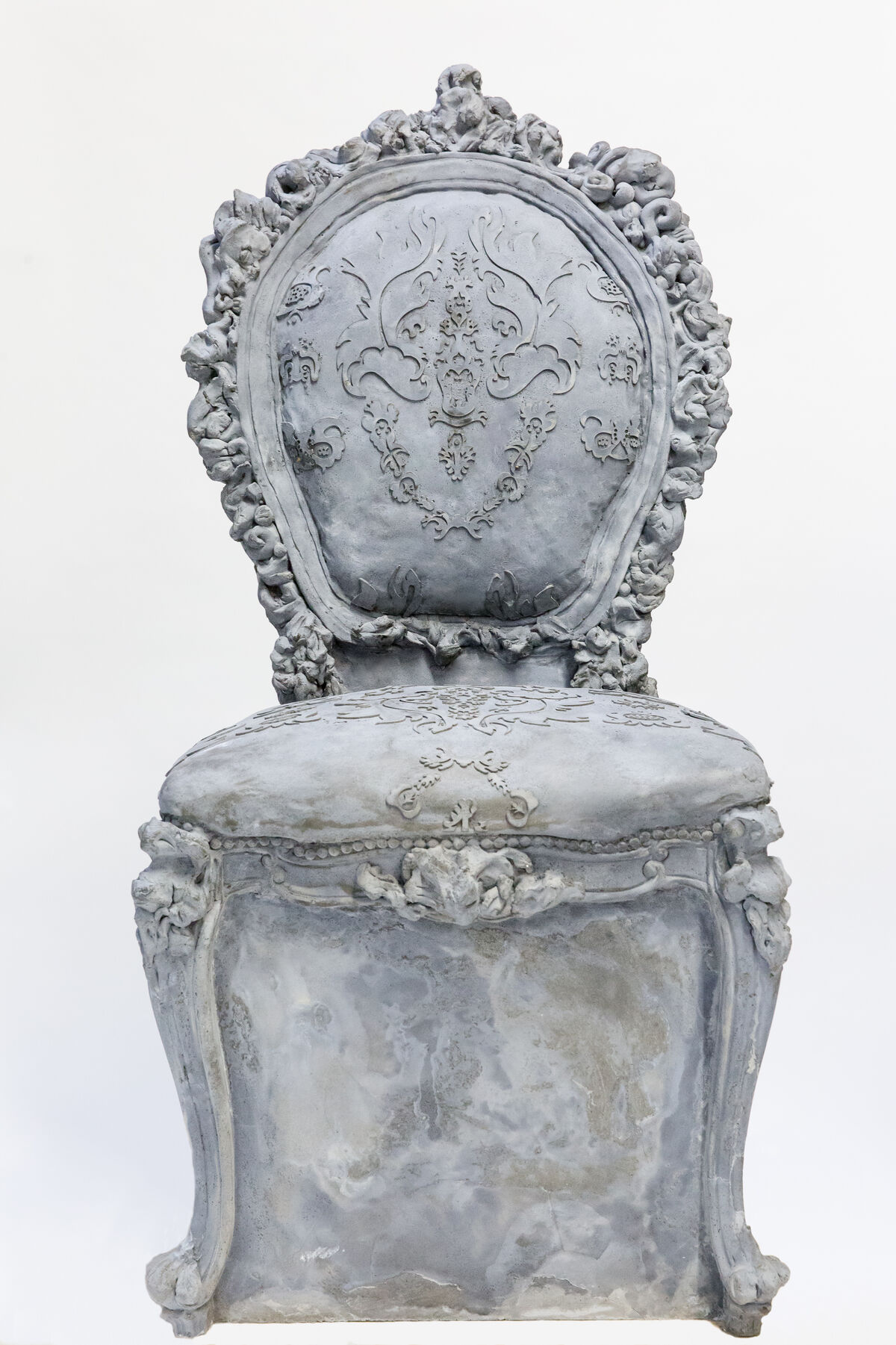 “What was the original Louis XIV settee?” poses the artist, who will have a sprawling solo show opening at MASS MoCA in October. “There isn’t one. It’s one of the things I find interesting in a larger sense about sculpture. Roman sculpture was copied from the Greeks. It was different permutations of an archetype, and copying is part of the tradition of making sculpture. There are very few completely original forms.”
The 35-year-old, L.A.-based artist, who studied photography at Harvard undergrad and shifted to sculpture and performance in her MFA program at the California Institute of the Arts, has made her own knock-offs. Using archival photographs of the Whitney ballroom from the Museum of the City of New York and the New York Historical Society as her guide, Glynn sourced vintage furniture from an interior design firm that works with films.
Based on measurements of furniture in the Metropolitan Museum of Art’s collection, she built out the dimensions of these replicas. She hand-drew and 3-D printed the patterns of historic damask fabric, which she glued on to her modified furniture before making molds and then casting multiples in concrete.
“I wanted to do them in the material
Le Corbusier
used to make housing for the masses,” says Glynn. Her installation underscores the vast income inequality and lack of affordable housing for artists and people in so many walks of life in New York. And it also gestures at correcting this imbalance—her elegant furniture, encased like fossils in chunky blocks of concrete at the base, is designed to be used liberally by the public.
Performance has long been central to Glynn’s approach to sculpture. In her recent exhibition “The Myth of Singularity” at the Paula Cooper Gallery, where Glynn is the youngest artist represented, she showed eight bronze figurative sculptures that were the result of a performance she orchestrated in 2013 at the Los Angeles County Museum of Art. 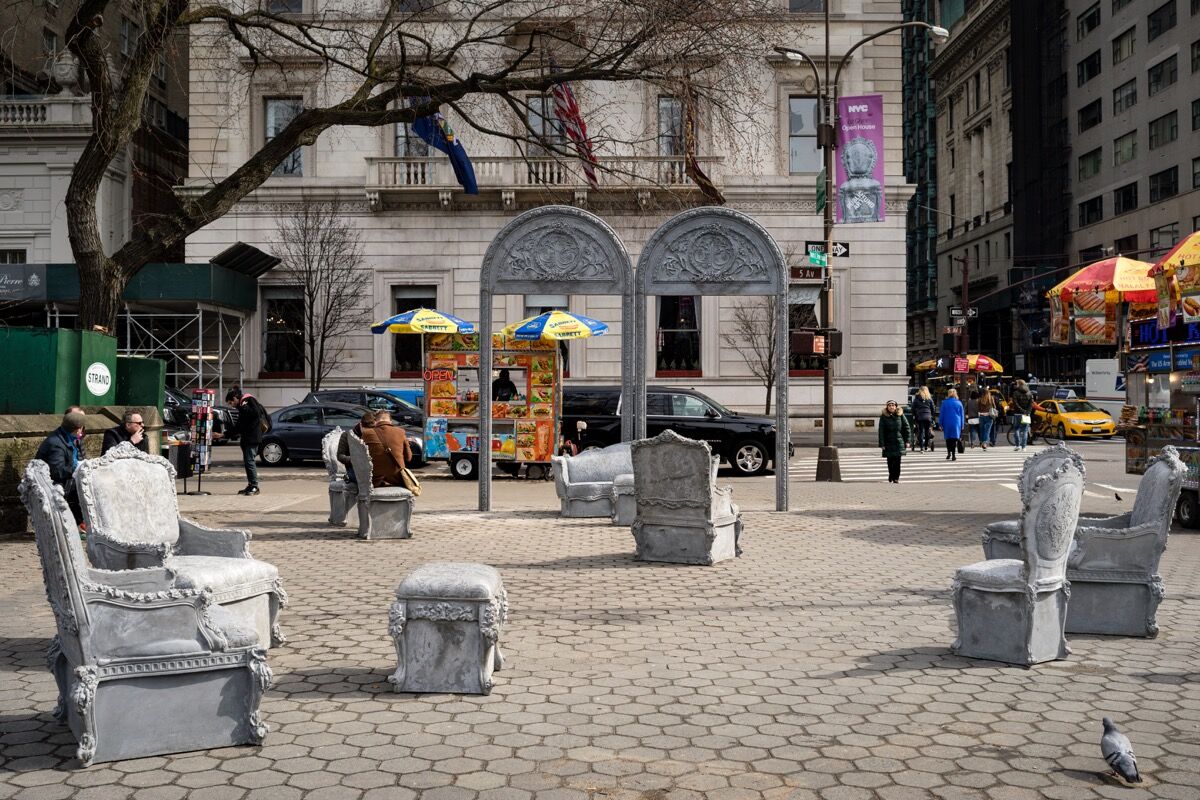 Advertisement
There, she had taken fragmentary molds of posthumous
Rodin
bronzes in the museum’s collection. During a public event, Glynn and eight assistants grafted them together into strangely disproportionate figures, some with extra faces or amputated limbs.
“We frankensteined them back into new bodies with plaster and burlap and steel armatures,” says Glynn, who was inspired by reading about Rodin’s process. “I just totally fell in love with his cannibalizing of his own work.” She cast these constructions in bronze and the first edition was acquired by LACMA.
For a performance at the opening of the Paula Cooper show, Glynn activated her installation of figures with dancers embodying texts about historical populist uprisings. She imagines that “Open House” will be completed by the public’s use of the furniture and occupation of the park’s plaza.
“There’s an uncanny thing where the furniture of Trump’s apartment apparently is Louis XIV,” says Glynn, who began working on “Open House” long before Trump announced his candidacy. “There has been a lot of economic analysis of income and cost of living statistics and the question of whether we are in another Gilded Age,” she says.
“This piece is not just hearkening back to a past, it’s very much about the present.”
—Hilarie Sheets
Related Stories