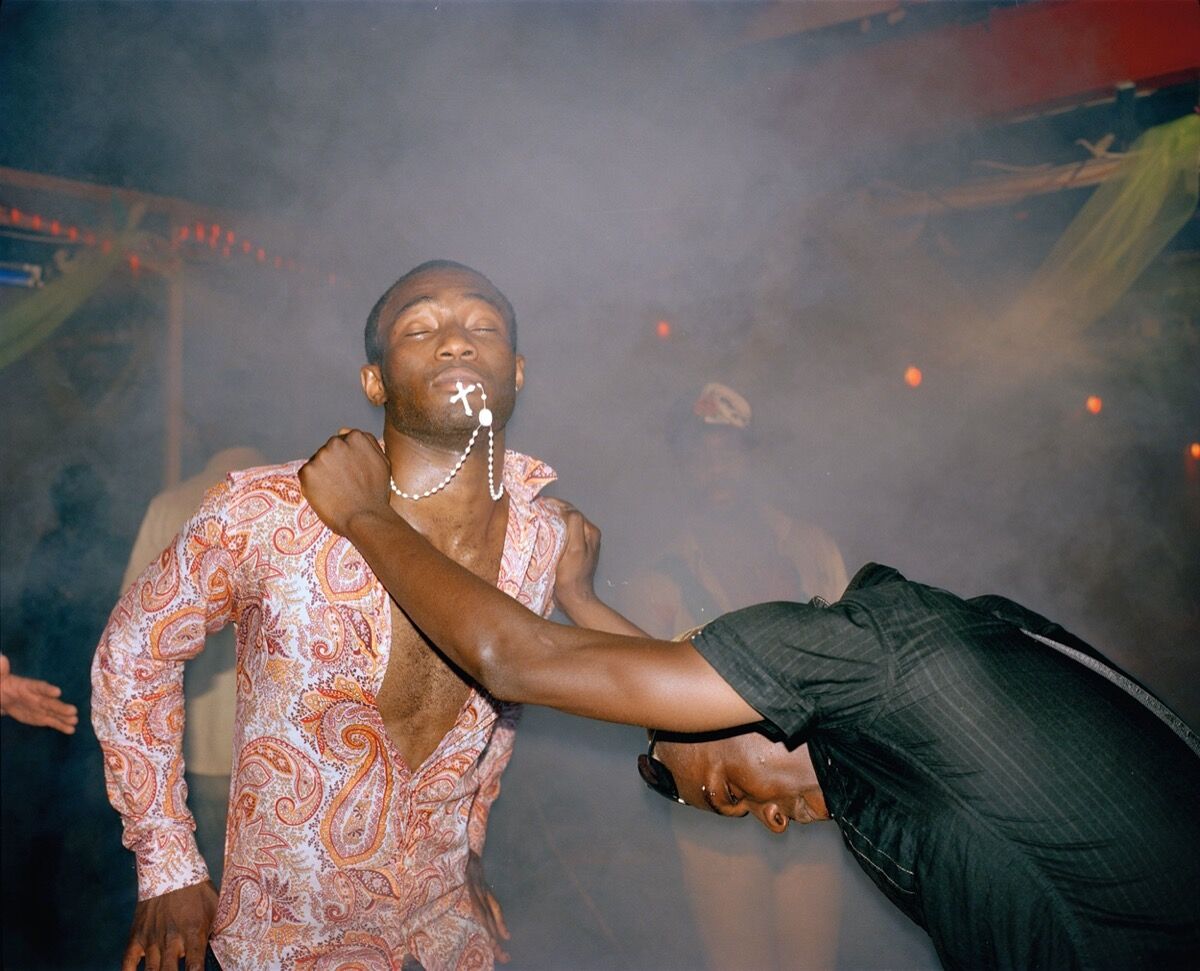 Looking through Liz Johnson Artur’s work is akin to a series of fleeting yet arresting encounters. Each vignette is a brief meeting with a person, a glance at their life, like peering through keyholes placed at random throughout the world. There are no locations, no dates, no titles—only portraits that, together, chronicle the African diaspora.
“I’m after the soul. I don’t need to own it, but I like to glimpse it,” Johnson Artur said during the opening of her latest show, “Dusha,” which is currently on view at the Contemporary Art Museum St. Louis through April 19th, after showing at the Brooklyn Museum last year. Dusha means “soul” in Russian; Johnson Artur, who is black, is of Russian-Ghanaian descent and grew up between Bulgaria, Germany, and the Soviet Union. “My childhood was very much one where I hardly went to any Western countries,” she told Artsy. She did not encounter any black communities for the first two decades of her life. 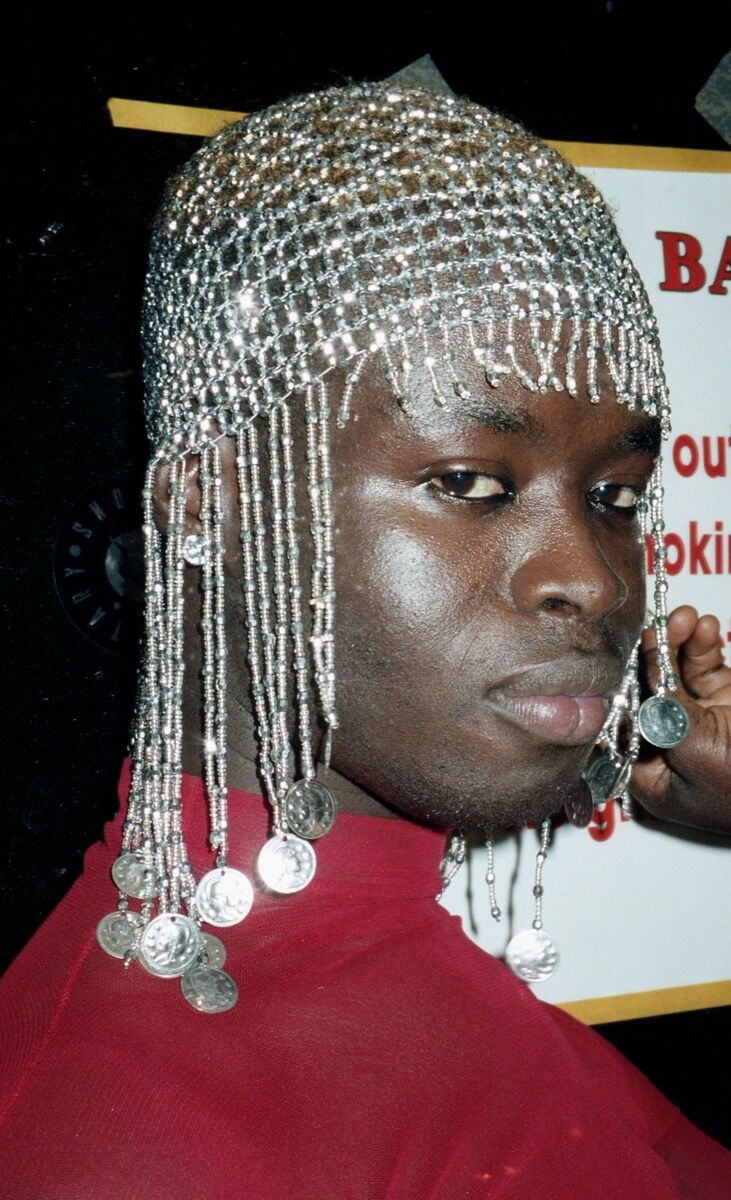 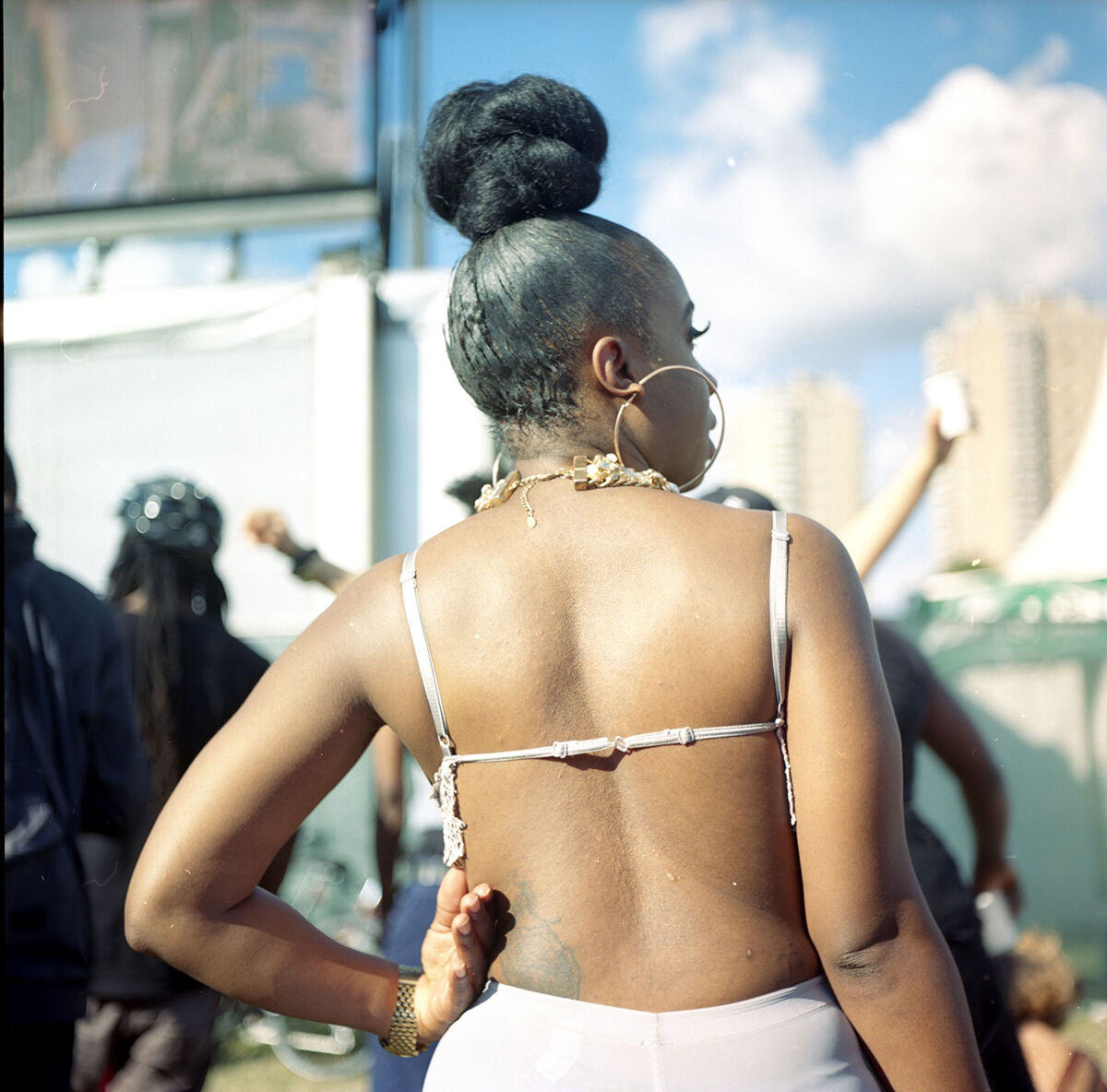 That changed during her first visit to Brooklyn, in 1986, when she experienced the vibrancy of black culture in New York. On that trip, she picked up a camera for the first time and began to take photos of the people she met. When she returned to Germany, she began studying the medium in earnest, and eventually earned her master’s degree at the Royal College of Art in London. In 1991, Johnson Artur started the “Black Balloon Archive,” her ongoing, lifelong project celebrating black culture all over the world. The images are largely joyful: men splashed with water and sand, laughing on the beach; street portraits of people in vivid prints and bold makeup; a club-goer in a paisley shirt lost in the ecstasy of the moment, a rosary dangling from his mouth.
“I loved the process of making photographs,” she said. “But it also opened up the possibility of going to places that I didn’t know how to go to. When you have a camera, sometimes what you have is the reason.” 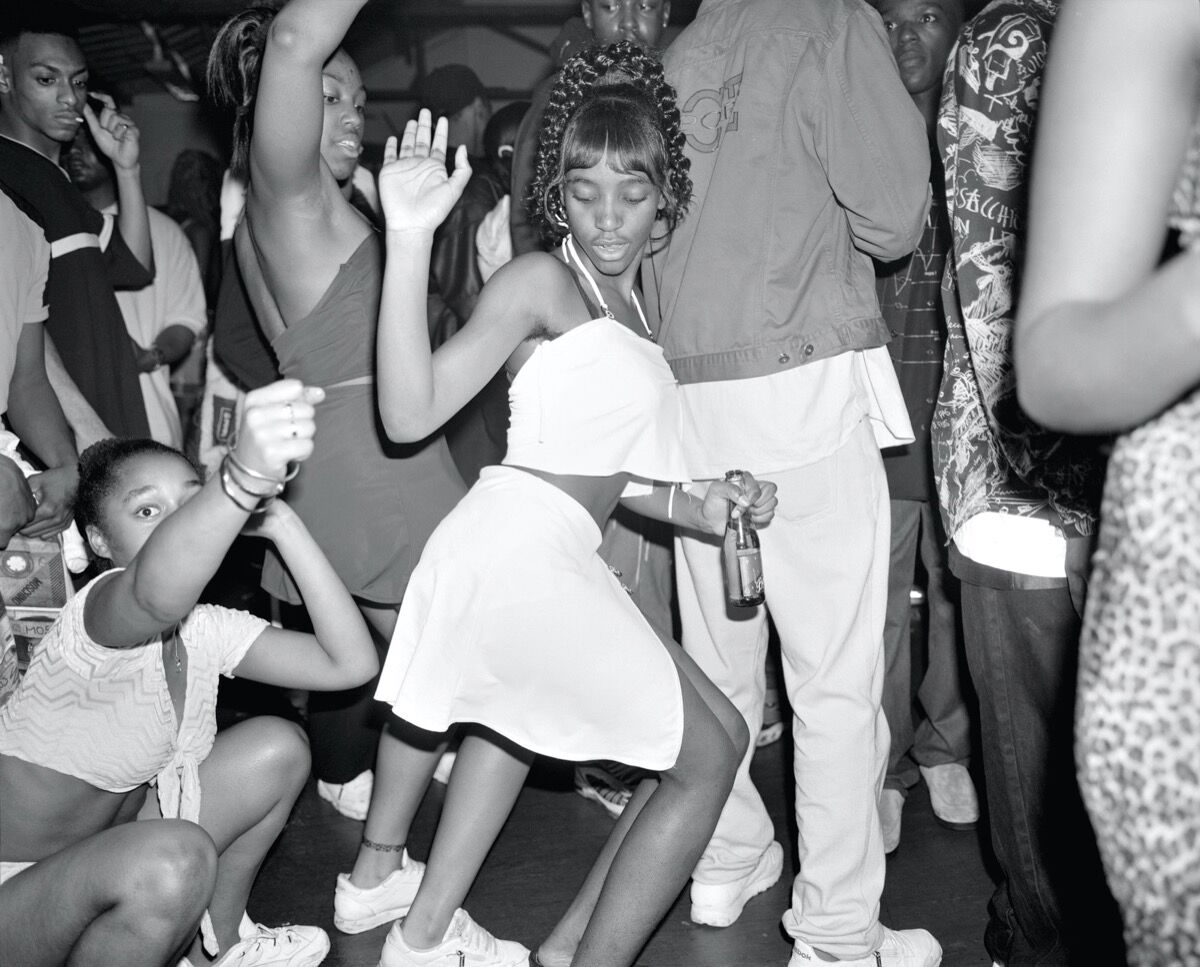 Advertisement
Until 2016, when she released an untitled monograph, Johnson Artur’s personal work was little known. She supported herself with editorial and commercial work—last year, her shoot for Rihanna’s Fenty line generated major buzz—and shot for artists like M.I.A. and Lady Gaga. Taking international gigs allowed Johnson Artur to travel for her archive—which spans her home city of London, Paris, New York, the Caribbean, and various locales in Africa—and quietly amass a body of photographs spanning three decades.
The “Black Balloon Archive” reflects Johnson Artur’s own experiences as she navigates the world documenting the diversity of black life, and the personal connections she’s fostered. “I’ve never been in a room full of black people and felt like a stranger, no matter where I was,” she said. She derived the name of her project from the Syl Johnson blues song “Black Balloons,” in which a black balloon dances in the air on a bright morning, against a snow-white sky. When The Fader interviewed Johnson Artur in 2016, asking what aspects of black life needed to be shown, she replied, “Normality, everyday life and moments. Diversity, things that might not make headlines but need to be represented.” 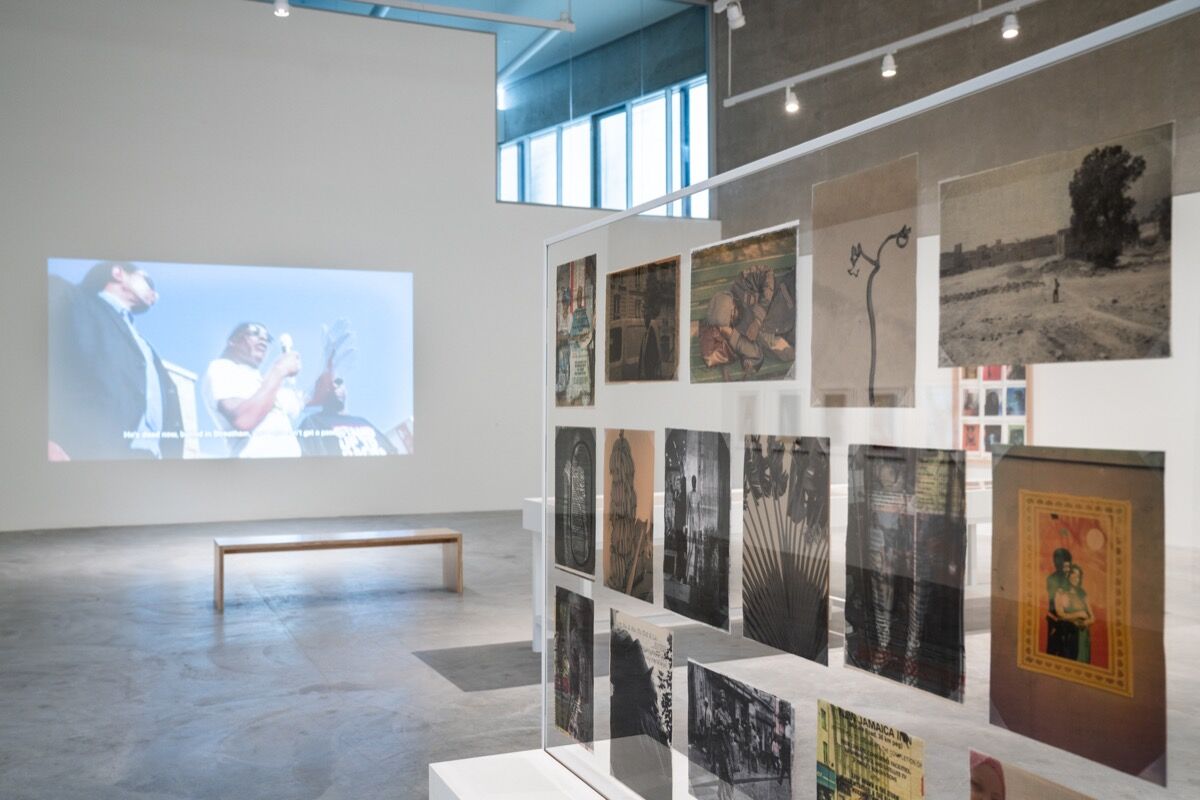 Individuality and charisma shine in each of her photographs. Her archive is not a single, monolithic portrait, but an intricate collection of stories. “My archive is…each person that I meet, which is much more complex than just being part of the diaspora,” she said.
Johnson Artur’s shoots are often brief encounters on the street, though she also captures people she sees again and again through the rituals of daily life. Some of her subjects have become her friends. She loves to be in a joyful space with music, where she can “float around,” as she puts it, and get close to people naturally. She often totes small film cameras, but has been known to use large-format, as well—a process that takes more time, stillness, and engagement.
All of Johnson Artur’s photos are presented untitled and undated to give each image equal weight, and to allow unexpected visual connections to form between them. “I’ve tried to eliminate things around the photographs that take away from…just looking at that moment that the picture represents,” she explained. That idea, which she says makes the archive more democratic, carries through from her shows to her untitled clothbound book from 2016—which was designed simply with only a single image per page—and to her website. 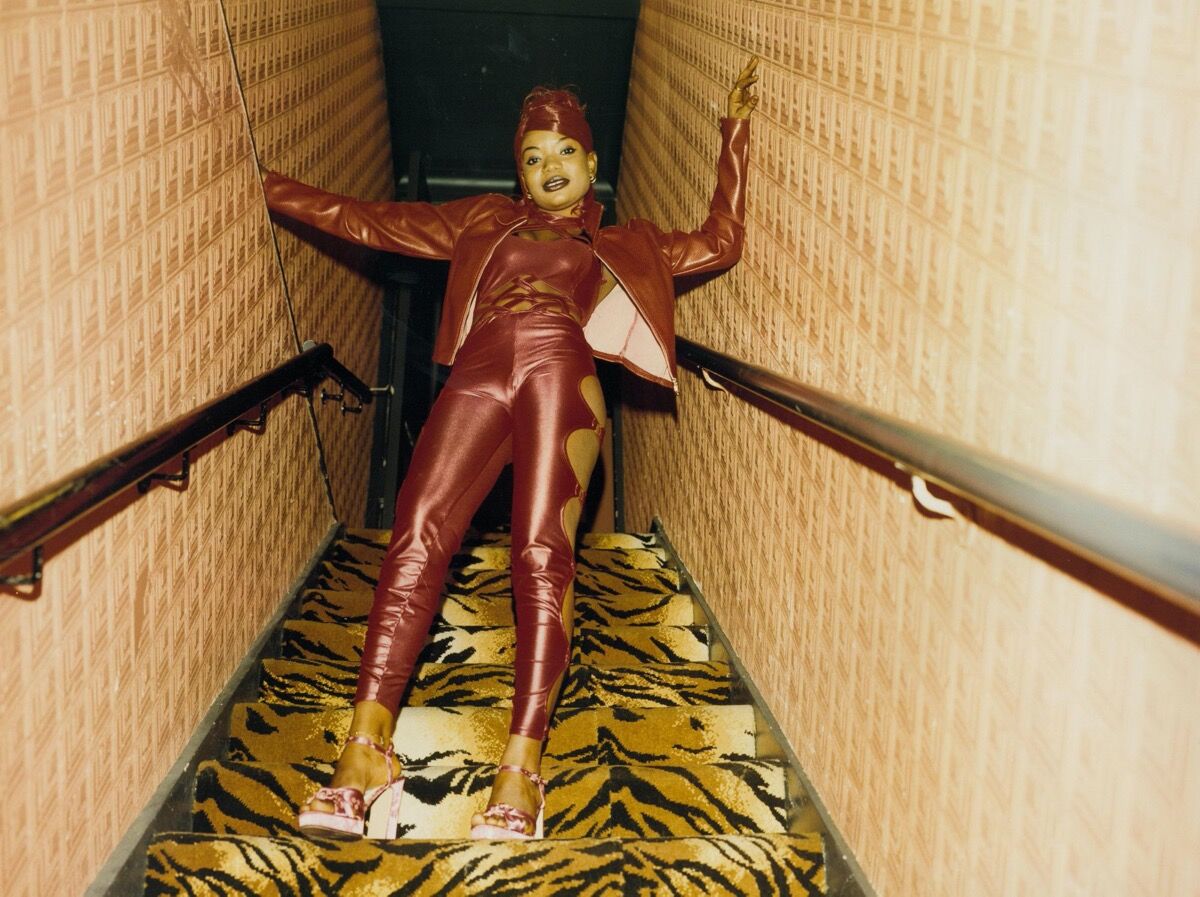 Because of the spare way Johnson Artur presents her work and the intimacy she establishes with each moment, her archive has been compared to the format of a family album. While the photographer said she thinks it’s “a catchy phrase” and she doesn’t mind it, she added that “I think if I’m real about what I do, it’s something that is very straightforward. I’ve been taking photographs wherever I could, and I’ve been trying to accumulate them. I’ve been trying to make sense of them just for myself.” However, she does see in her work the power to evoke personal recollections. “There is something that I think reflects people’s memories of their childhood, their aunties, their uncles,” she said.
Johnson Artur carefully considers the ways in which her work will be shown, and how viewers can engage with her archive. She creates video and sound installations, and experiments with materials by printing on leather, newspaper, or linen to add a tactile quality to the images. For the St. Louis show, she made a fabric book that visitors can look through—something she wasn’t able to do at the Brooklyn Museum, she said, due to the institution’s rules. 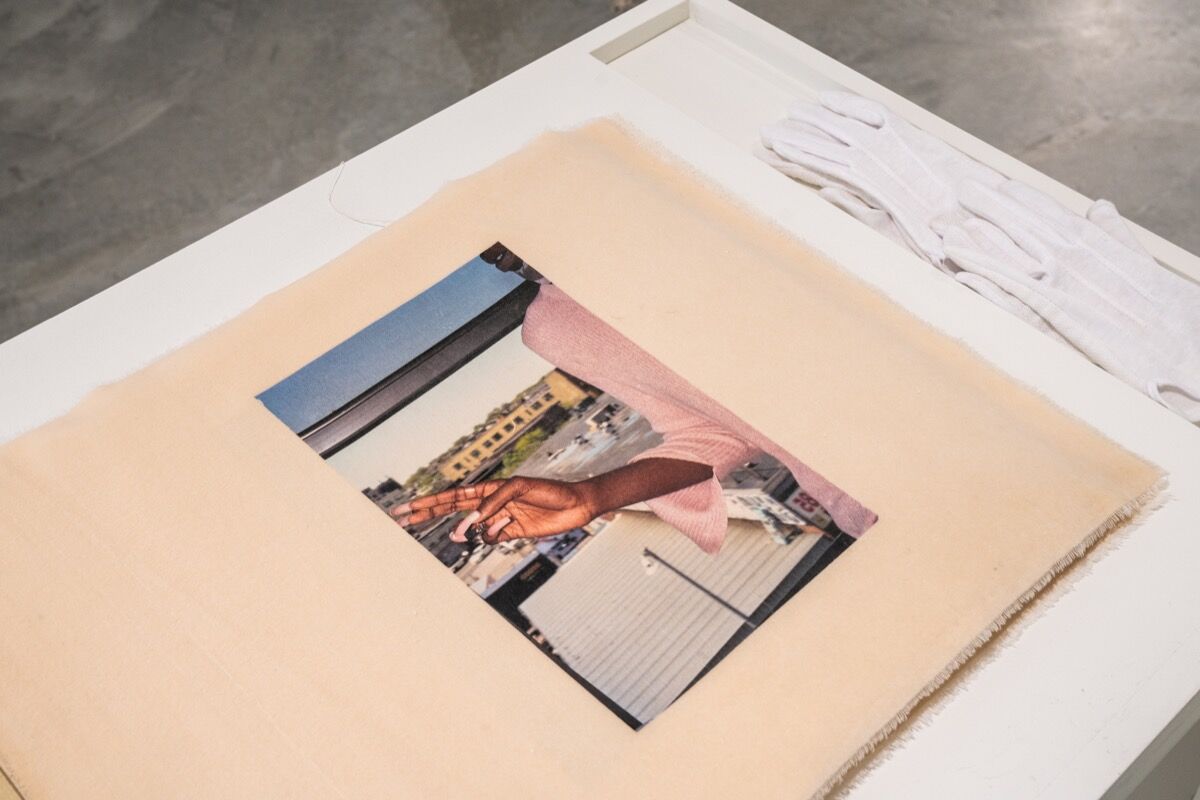 “When people come to my studio, I show them work and touch everything, and let people touch things, and I think that process is very important,” she said. “It’s something that goes beyond this sheer looking at a photograph.” For her large-scale fabric piece London Tapestry, 2018—a modern riff on the 11th-century Bayeux Tapestry—Johnson Artur stitched together an assemblage of photographed scenes of black men and women in London. When it was exhibited at South London Gallery that year, in her first U.K. solo show, she hoped some visitors might spot themselves or their loved ones.
Building her archive and meeting her subjects has helped Johnson Artur grow as a person. “That’s the beauty of being the one who takes the picture,” she said. “I don’t just keep the moment, I also live the moment.”
Jacqui Palumbo is a contributing writer for Artsy Editorial.
Related Stories

6 AAPI Artists Reflect on the Spike in Anti-Asian Violence