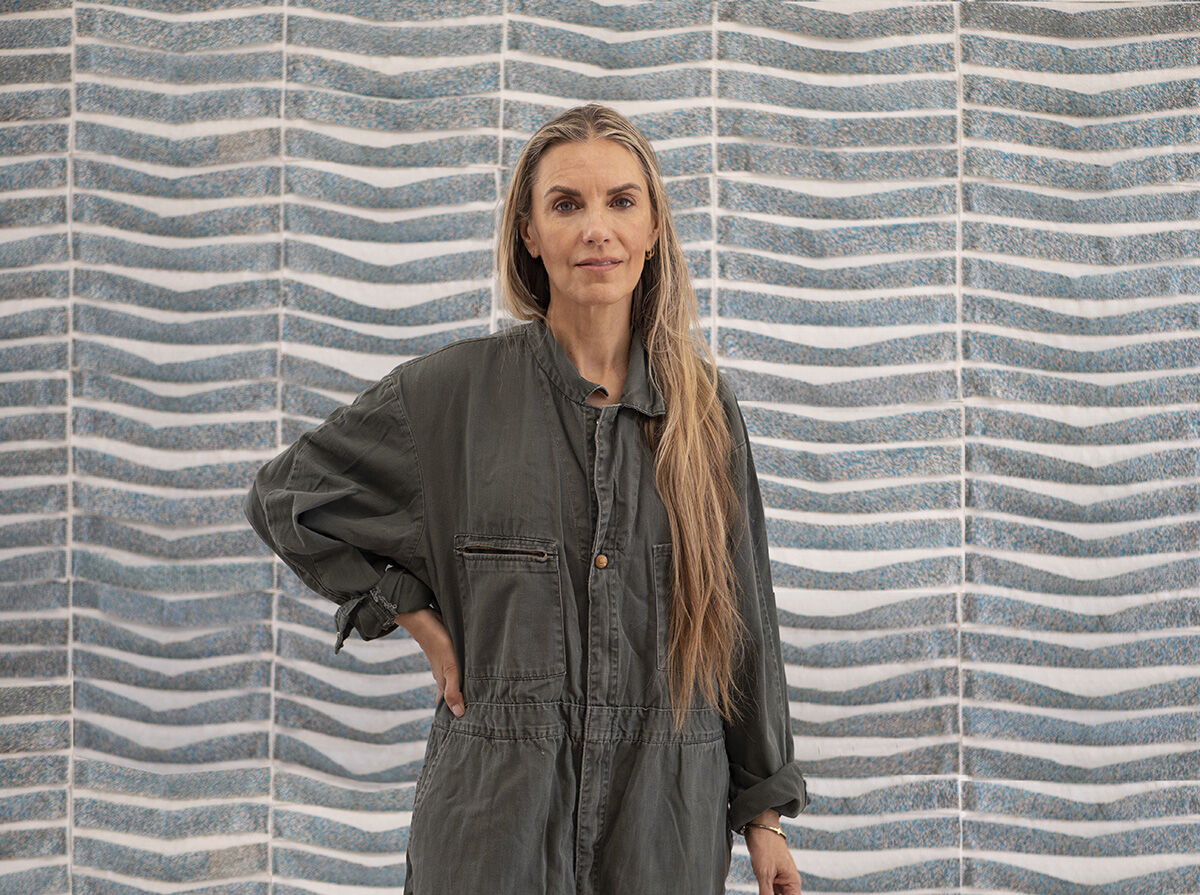 Portrait of Liza Lou by Mick Haggerty. Courtesy of the artist and Lehmann Maupin.

In the early 1990s,
Liza Lou
was making her entirely beaded, seminal installation, Kitchen (1991–96), at her mother’s house. At the time, she kept a folder called “Unfortunately,” to save rejection letters from grant and exhibition applications. They mostly began with a generic “Dear Artist,” although her favorite ended with a firm “If you don’t collect your slides by such-and-such a date, they will be confiscated.” As she meticulously applied beads onto every inch of her 168-square-foot rendition of a typical American kitchen, Lou then felt compelled to think beyond the achievements she could list on a CV. “I eventually realized that being an artist meant focusing upon everything that existed outside of my ‘Unfortunately’ folder,” she recently recalled, “and that encompassed nearly the entire universe.” Kitchen now sits in the collection of the Whitney Museum, and it’s the most famous example of the artist’s deft ability to create dazzling—at times otherworldly—works of art with simple, everyday glass beads.
Lou recently opened “Desire Lines,” her fifth exhibition with Lehmann Maupin at the gallery’s London space, showcasing 10 works that continue her explorations with beads. She created the mainly monochromatic beaded paintings and sculptures at her soaring Joshua Tree studio, where she often paints en plein air. Inside, the large windows on both ends convey the feeling of working inside a mountain. 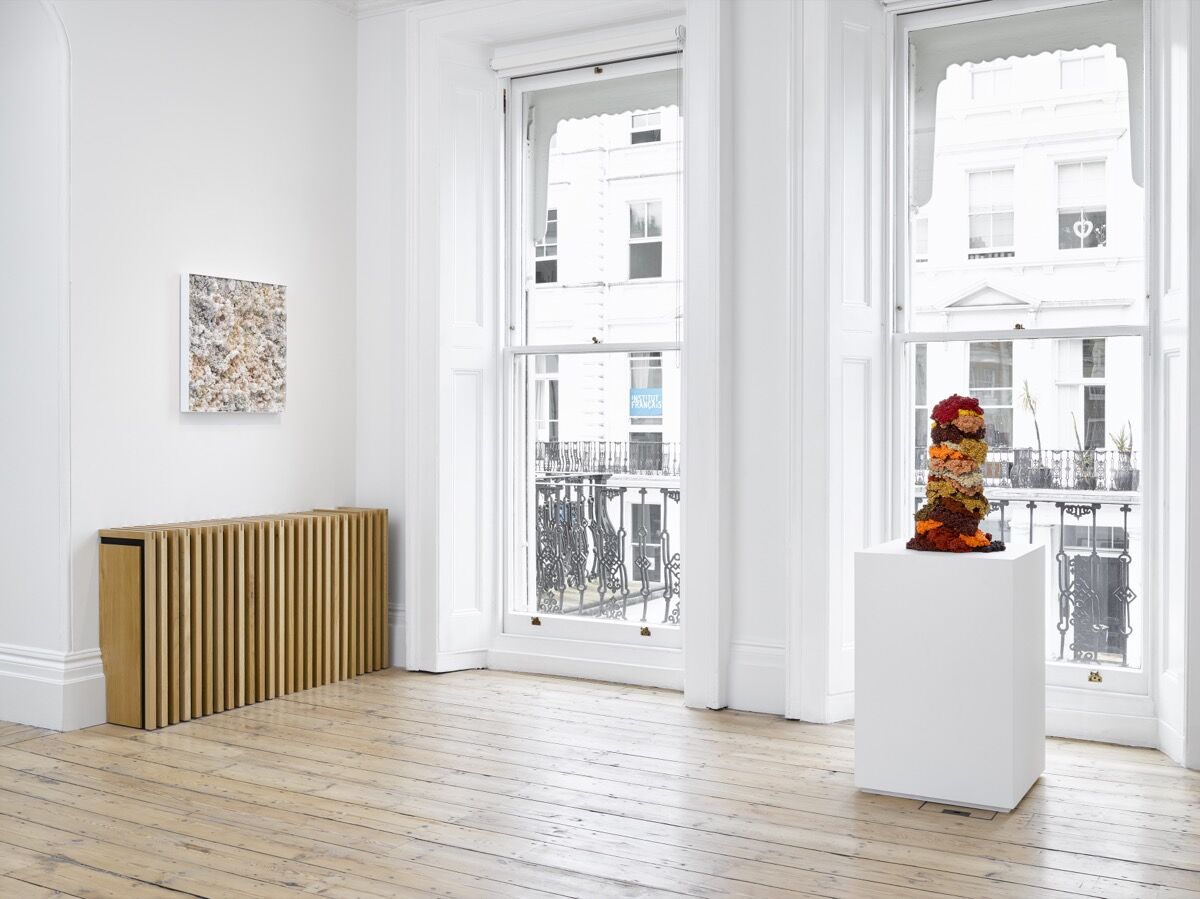 Liza Lou, installation view, from left to right, of Terra Incognita, 2021; and Slow Jam, 2018, in “Desire Lines” at Lehmann Maupin, London, 2021. Photo by Jack Hems. Courtesy of the artist and Lehmann Maupin.

Her new piece Not Dark Yet (2021) embodies the impending dusk, with loosely hung woven gray beaded strips orchestrated horizontally over the stretched canvas. Terra Incognita (2021) recalls age-old rock formations through heaps of beads glistening under light, like rocks under the scorching sun. “Obviously, my work pales in comparison, but I’m interested in slow accretion, and building up of forms over time,” Lou said of echoing the natural world she observes through her studio’s windows.
Lou’s immersion in the desert’s otherworldly habitat is a central theme throughout the new works. “Nature reminds us that it will go on being here long after we’ve obliterated ourselves,” she said. “Rocks will go on being rocks; trees will go on tree-ing, and this amplified awareness allowed me more freedom and experimentation, and a kind of animated suspension in the work.” 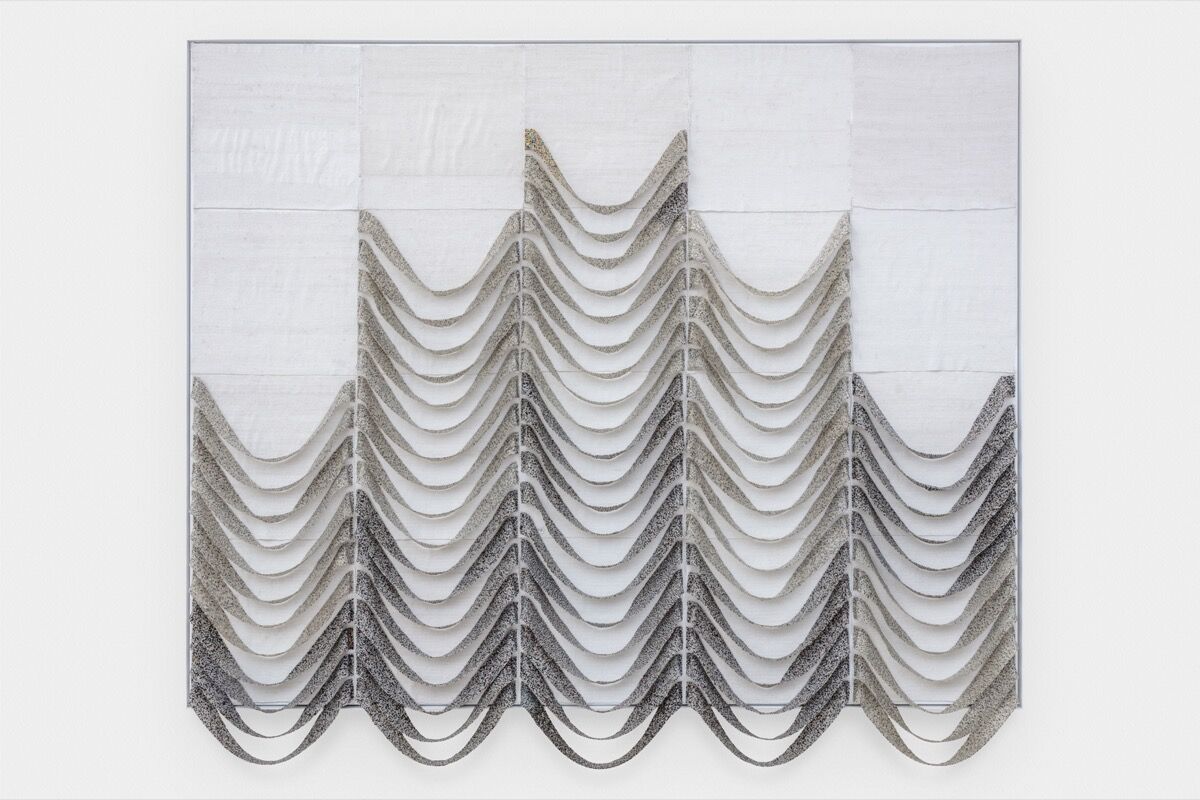 Liza Lou, Not Dark Yet, 2021. Photo by Joshua White. Courtesy of the artist and Lehmann Maupin.

Advertisement
The show’s title, “Desire Lines,” is particularly fitting. The architectural term is used to describe the way our bodies are compelled to move through a space or landscape within its physical limits. “And as with everything, this starts with a thought,” Lou said. In developing the show, Lou was turning to neurologist Frank R. Wilson’s 1999 book The Hand: How Its Use Shapes the Brain, Language, and Human Culture and Kay Ryan’s 2006 poem “We’re Building the Ship as We Sail It.”
“The ship we are building is actually ourselves,” Lou reflected, pointing specifically to Ryan’s verses: “It’s awkward / to have to do one’s / planning in extremis / in the early years / so hard to hide later: / sleekening the hull, making things / more gracious.” 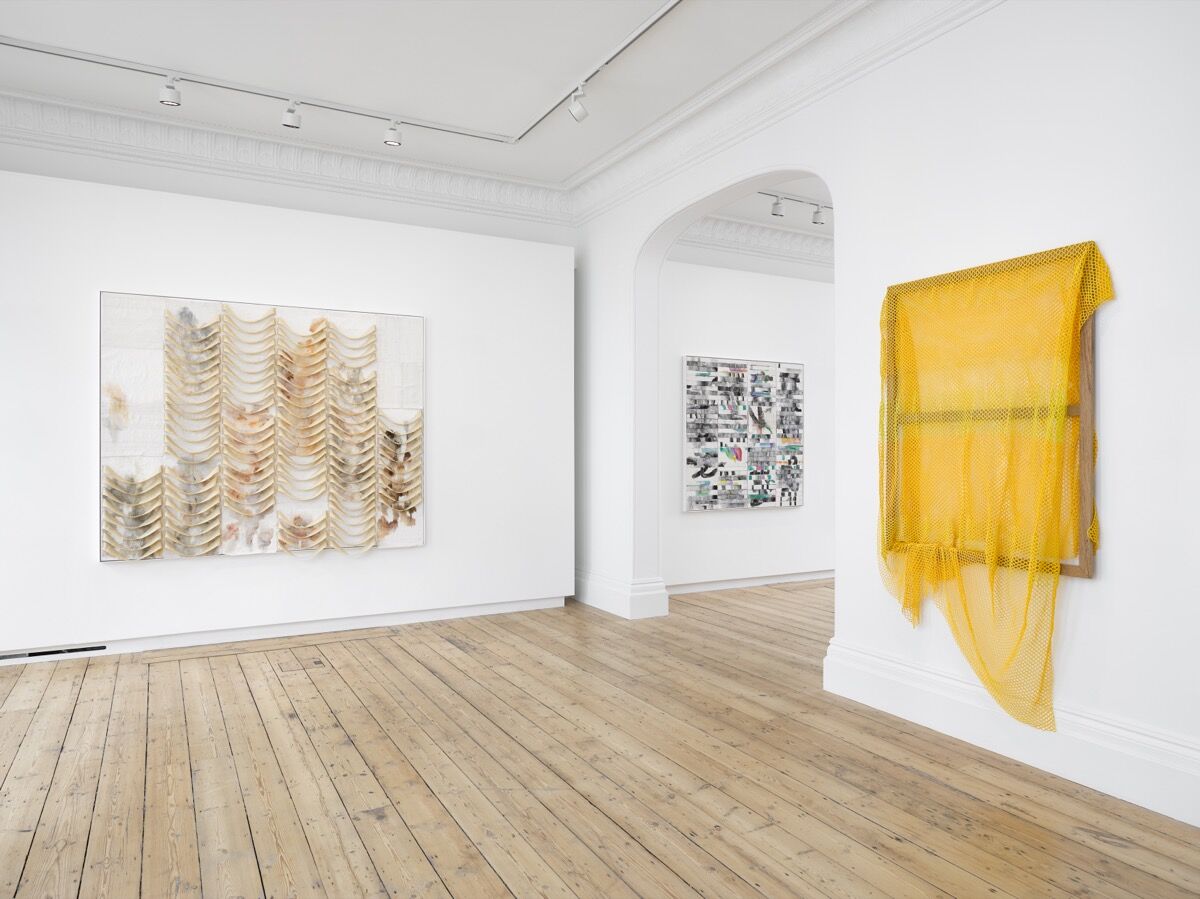 Working with beads is a journey in itself for Lou. The miniscule material demands patience and tedious manual labor, but the artist finds joy in the introspective, meditative work. “The meticulous aspect requires a certain amount of serenity,” she said. “My earlier work didn’t show this aspect on the surface as readily, but it was always there in the making of the work.”
The surreal panorama of Joshua Tree—where fiery shades of pink and orange paint the sky under bulbous rocks and spiky trees—accommodates this mental state. “Working in the desert, there is a sense of urgency, but also a feeling of being submerged in color,” Lou said. “In a landscape that took millions of years to evolve, there is a constant reminder of one’s mortality.” 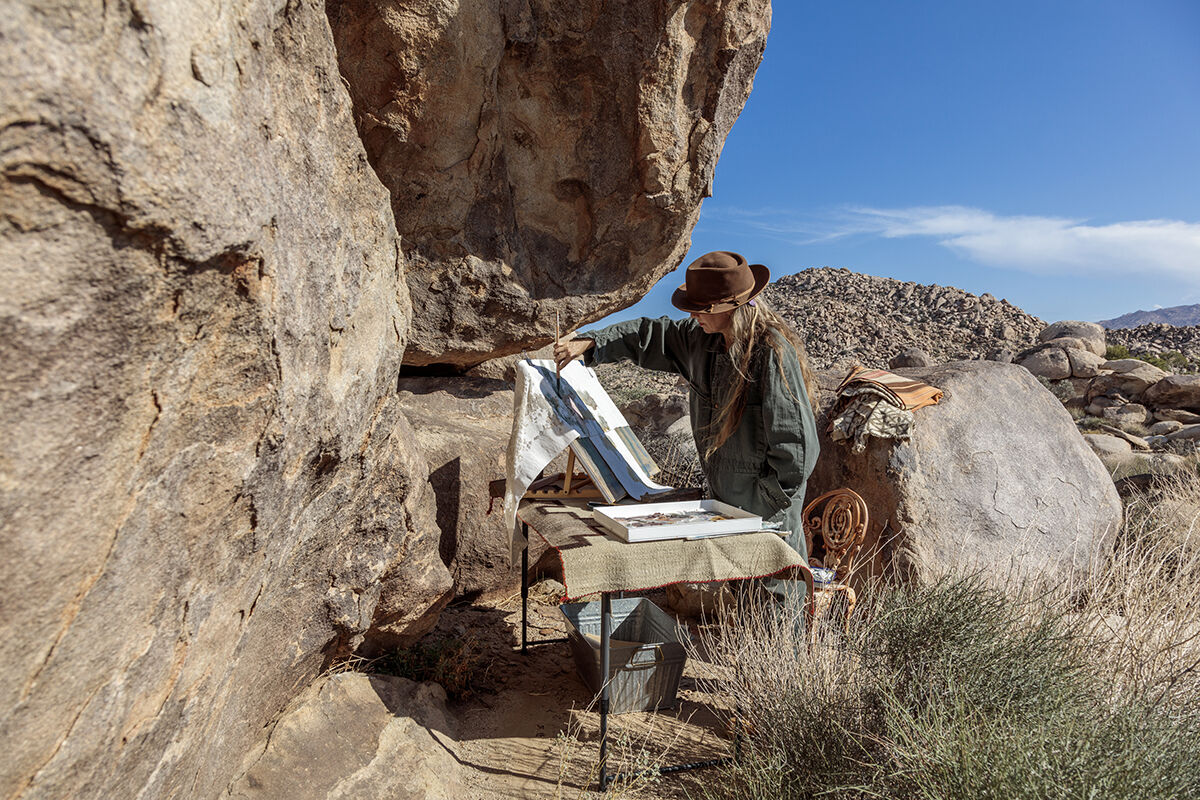 Portrait of Liza Lou in Joshua Tree, 2021. Photo by Joshua White. Courtesy of the artist and Lehmann Maupin.

Her daily routine starts with a long walk for new discoveries. Then, back at the studio, she translates her observations through these artificial yet wondrous compositions of beads. Recently, Lou’s taken to smashing the beads with a hammer, then adding painterly finishes over the material’s inherent sheen, as in works like Going to California and Lost Highway (both 2021). “I reached a point making woven canvases where I began to ask what the material does that paint can’t do,” she explained.
The show also includes Carbon Gunmetal/Divide and Sepia Bronze/Divide, two older beaded paintings, created between 2012 and 2014, with visual nods to Minimalism. Both paintings split the canvas horizontally into two subdued colors—grayish in the former, earthier in the latter—all awash with countless beads inhabiting the surface.
Her sculptural work Aggregate: Bronze (2018) meanwhile references Abstract Expressionism. In her own poetic words, this is “a relationship with color itself, and the way in which a bead is a unit of color, a droplet, all of which reminds me of the splatter and drips of Abstract Expressionism.” 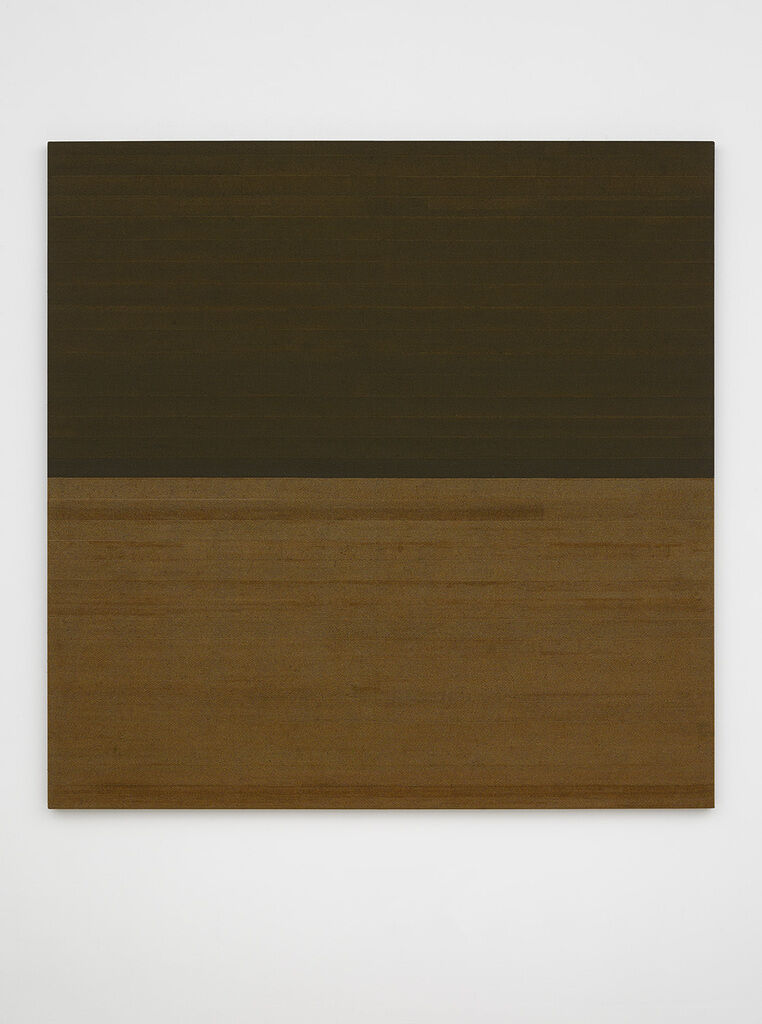 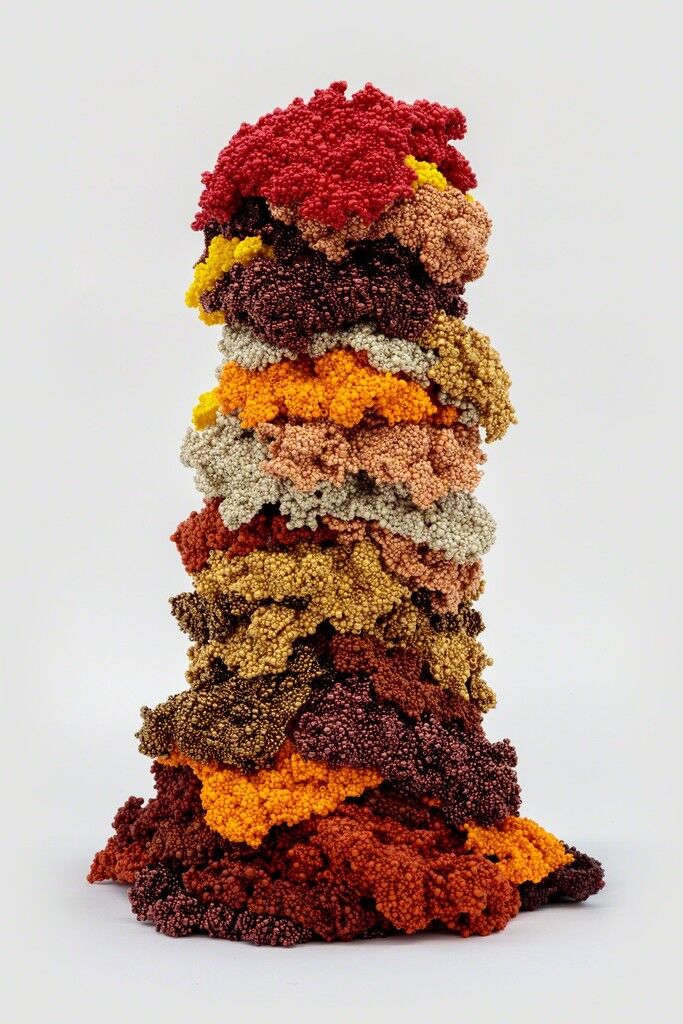 Liza Lou
Aggregate: Bronze, 2018
Lehmann Maupin
Lou’s enduring relationship with beads now coincides with the rise of craft materials and techniques among a new generation of contemporary artists. Such artists have relinquished this work from its associations with gender, labor, and certain aesthetics, while institutions have dedicated overdue spotlight to craft pioneers. As a result, many museum shows have surfaced across the United States in the past few years, including the Whitney’s ongoing “Making Knowing: Craft in Art, 1950–2019,” where Lou’s incomparable Kitchen is earning due acclaim. But her masterful beadwork hasn’t always drawn awe.
In her early years, Lou had not imagined the craftiness of her work to be an issue. “Hadn’t the feminist artists of the seventies already slayed that dragon?” she had thought. The young artist found that the bead may well have been considered “the least cool, most terrible material possible.” She compares that moment in her career to an Andy Kaufman joke, “where the audience wasn’t sure if I was in on the joke.” 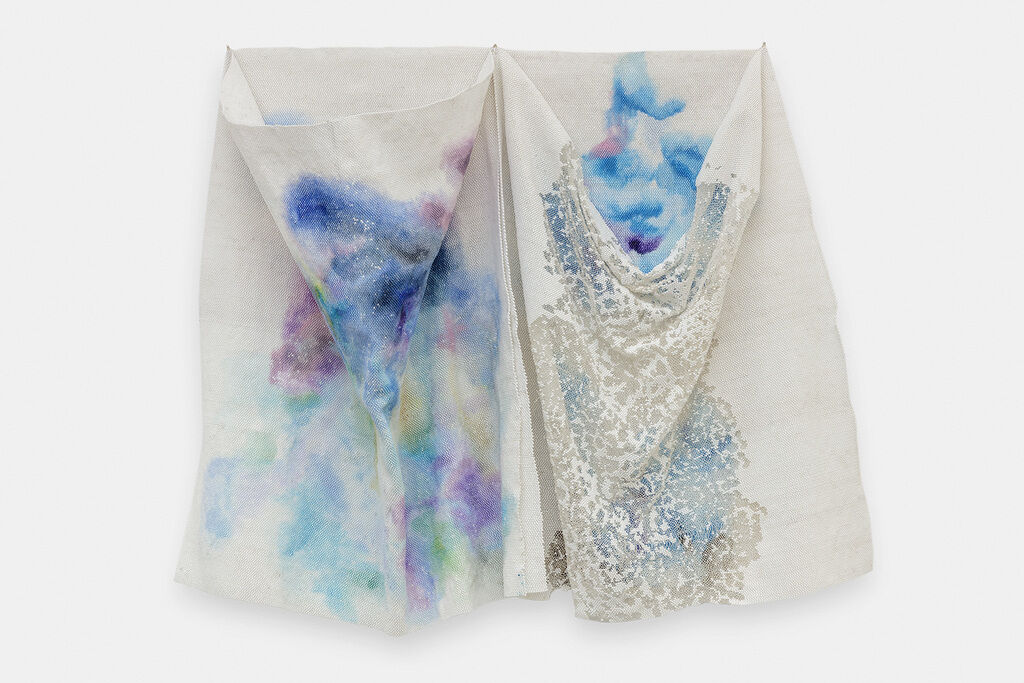 Liza Lou
Nightsong, 2019
Lehmann Maupin
Over the years, Lou witnessed male artists starting to experiment with weaving and sewing, and saw the perceptions around craft shift. “You can be doing something for 30 years, but once a man does it, everyone can relax and say, ‘Ah, yes, that’s very smart indeed, and so original,’” she said.
Lately, queer artists, like
Raúl de Nieves
,
Jonathan Lyndon Chase
, and
L.J. Roberts
, are pushing craft to further limits, making statements on internet culture, identity politics, and the self. They subvert the modesty and everyday-ness of traditional craft with unabashed gestures and piercing statements, while embracing the occasional kitsch as a weapon for identity—in many ways expanding on a tradition previously explored by the 1970s women-led
Pattern and Decoration
movement or by Lou herself.
The emotional connection to the bead has been consistent for Lou throughout her career. “Beads seem to find me,” she said. “I can be in a foreign city and look down, and there’s a bead.” 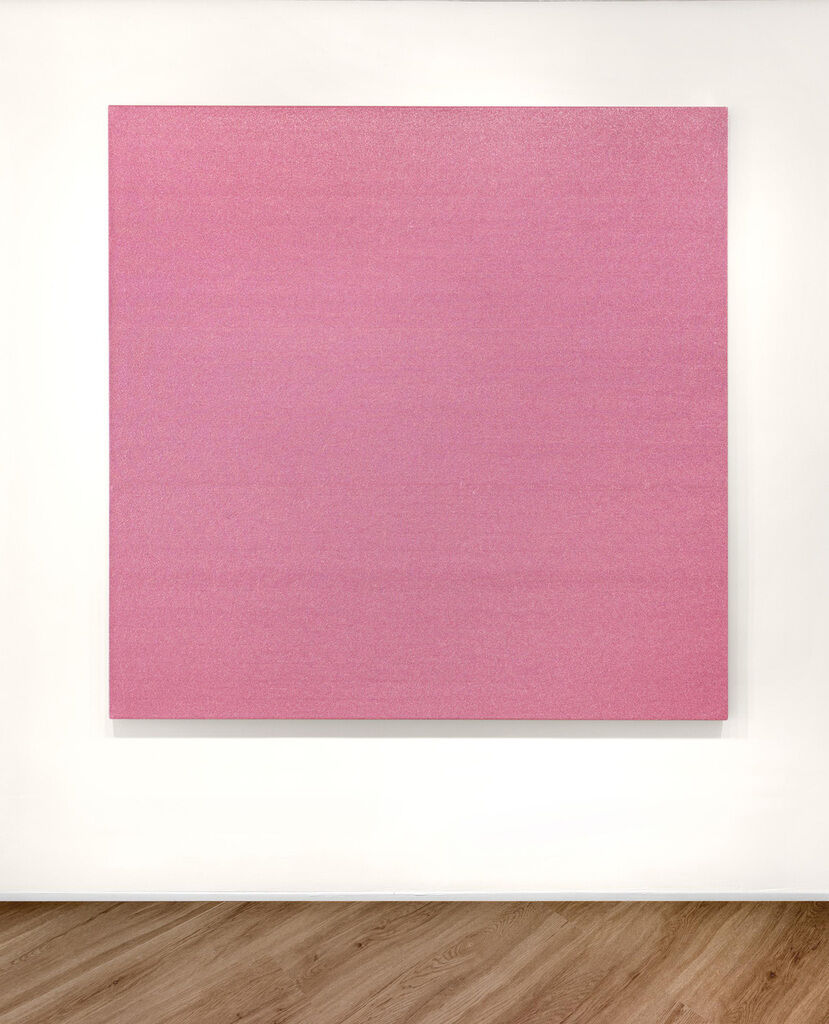 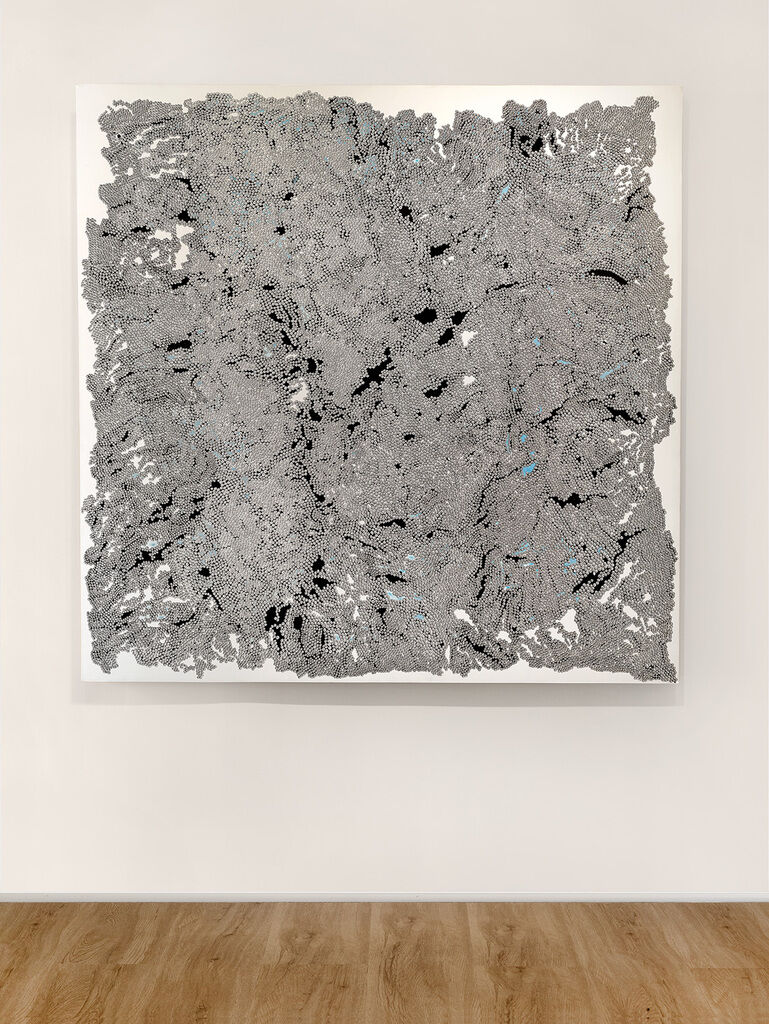 Liza Lou
Drawing Water, 2020
Lehmann Maupin
While Lou was making Kitchen in her early twenties, a friend watched her count each bead. “That friend told me I was meditating, which helped me realize I had an opportunity to use the material as a kind of japamala to watch the mind,” she said, referring to the prayer beads used in various religions including Buddhism, Hinduism, Jainism, and Sikhism. Over 30 years later, new challenges—not rejection letters but a search to reinvent the medium’s language, or even natural calamities such as the pandemic—still contribute to Lou’s art, which is inseparable from her life. The new show adds another thread to her practice of weaving together something larger than life and as humble as a glass bead.
“The reason beads have holes is so that people can sew the thing that they value most to their personage,” Lou said. “Craft is embedded in the blood, sweat, and tears of everyday life—it’s human, juicy, alive.”
Osman Can Yerebakan
Thumbnail image: Liza Lou, detail of “Terra Incognita,” 2021. Courtesy of the artist and Lehmann Maupin. Portrait of Liza Lou by Mick Haggerty. Courtesy of the artist and Lehmann Maupin.
Related Stories 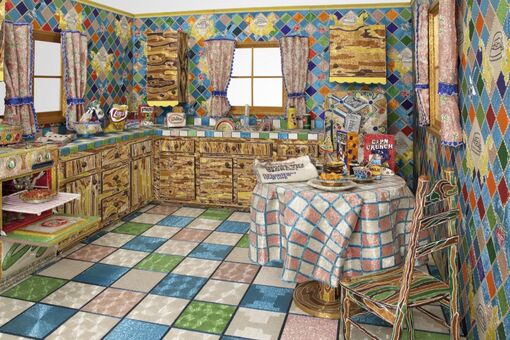 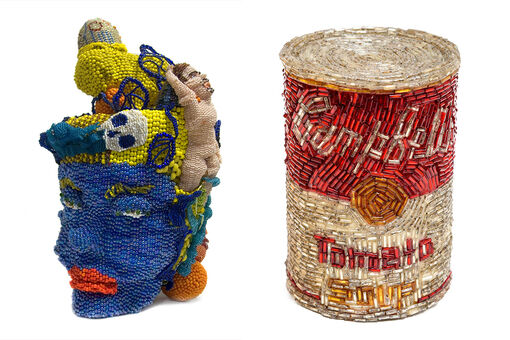