Christie’s Post-War and Contemporary Evening Sale on Friday evening took £35.5 million ($55 million) in front of yet another packed house this week, capping one the busiest periods in the London auction market with 82% of lots sold by volume and 92% by value.

Led by auctioneer and Christie’s Global President Jussi Pylkkänen, top-performing artists reverted to type. The sale’s top lot, Peter Doig’s brown, streaked Cabin Essence, sold for £9.6 million ($14.8 million, all prices include buyer’s premium). (Its estimate was available only on request.) Second for the evening, Gerhard Richter’s Abstraktes Bild, from 1992, sold for £2.6 million ($4 million), just above its £2.5 million presale estimate. An Alexander Calder mobile from around 1955, sold within expectations for £1.1 million ($1.8 million), as did Andy Warhol’s 1964 silkscreen, Flowers, which found a buyer for £1.8 million ($2.8 million). 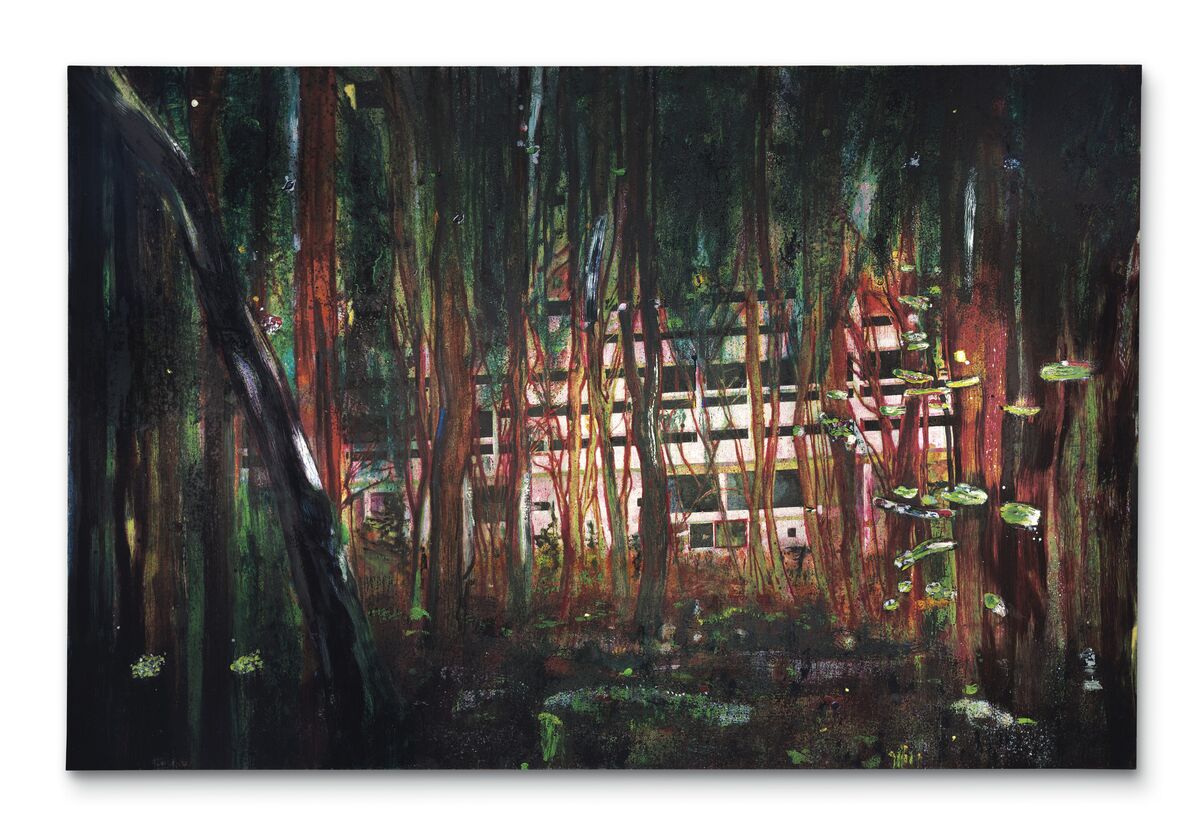 It was also a promising evening for the young Colombian, London-based artist Oscar Murillo, whose 2012 stack paintings sold for £242,500 ($370,298). Murillo is among the most prominent of the past few year’s boom in speculation on emerging art, but the 29-year-old’s market appears to beholding, Friday’s result having smashed the work’s pre-sale upper estimate of £180,000.

“Plenty of fireworks in the second session,” said Pylkkanen as he moved into the evening’s Italian Sale, one of several traditionally non-headlining auctions, which this week have been rivaling their contemporary equivalents for prominence. Here, early contenders at the time of writing included a £2.1 million ($3.2 million) sale of a slashed canvas by Lucio Fontana, another of the week’s big winners.
The Friday Christie’s sales rounded off a bumper week, timed to coincide with international collectors in town to visit the two Frieze fairs taking place just the other side of Oxford Street. Invariably most auction houses reported busy audiences, though sell-through rates were not always consistent. 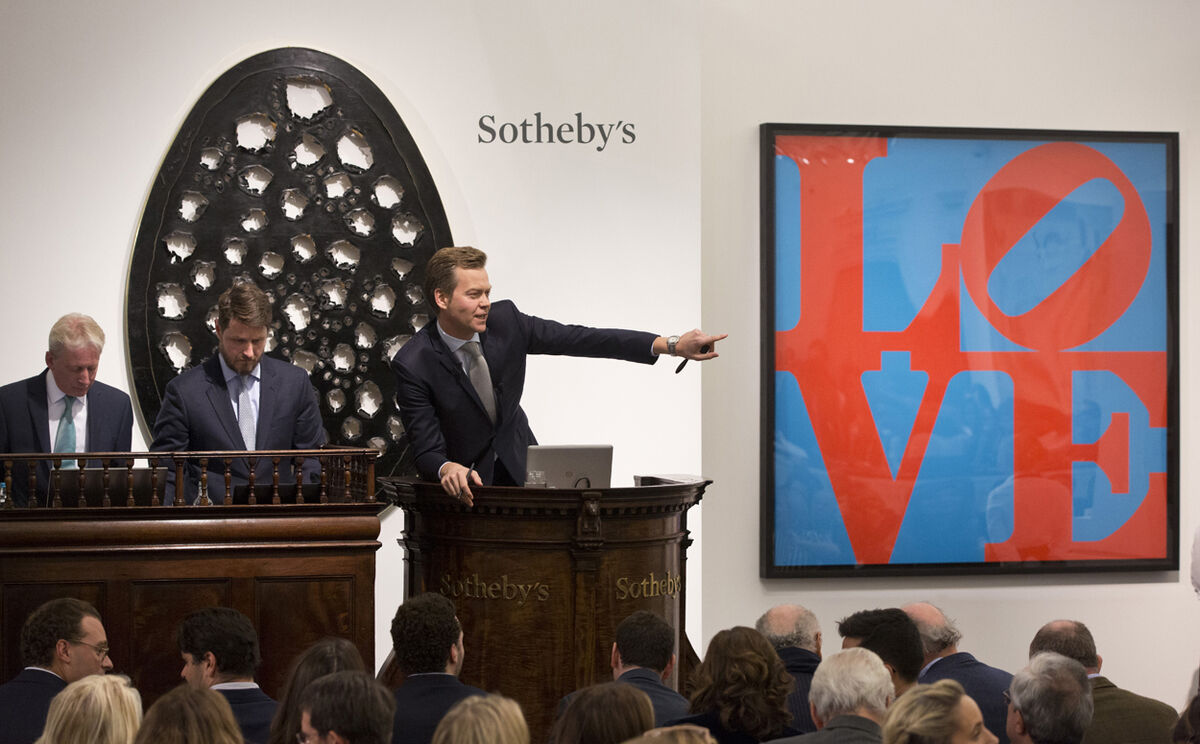 Advertisement
At Sotheby’s earlier this week, Fontana underlined his position as a Frieze Week favorite. The artist is currently featured in an exhibition organized by the Casamonti family—declared in 2011 to be the biggest owner of the Italian’s work in the world—at their new Tornabuoni Art space in Mayfair. His work is also hanging in Luxembourg & Dayan’s curated stand at Frieze Masters, a reimagining of the legendary Galerie Iris Clert in Paris, which dealt Fontana’s work in France.

Clert had a hand in the top lot at the auction house’s Italian Sale on Thursday. She owned and exhibited Concetto Spaziale, La Fine di Dio (1963)—a punctured depiction of a human-sized egg—in 1964 one of only three times since that the work has come on public view. The piece sold for a record £15.9 million ($24.7million), one of ten works by the artist that went that day, and while the Italian sale netted £40.4 million ($62.5 million) in total, just over a fifth of the lots remained unsold. 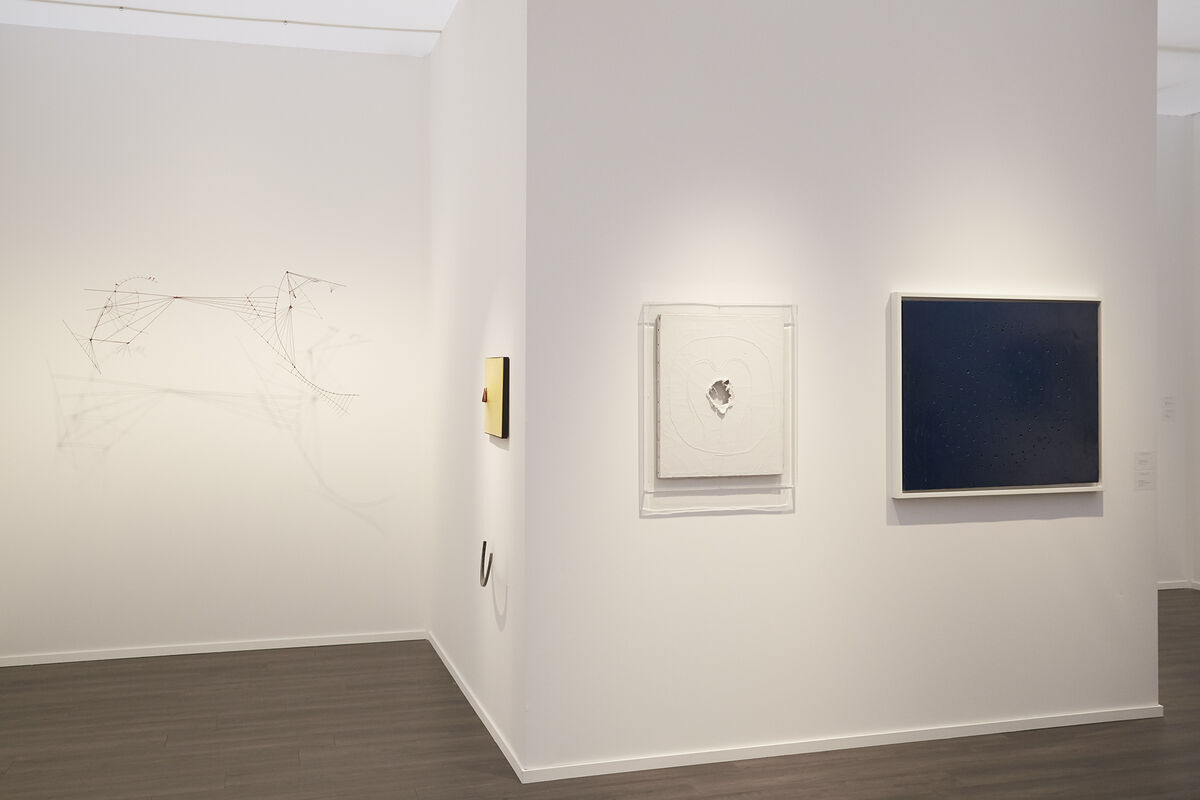 Lucio Fontana, Concetto Spaziale, and other works on view at Luxembourg & Dayan’s booth at Frieze Masters, 2015. Photo by Benjamin Westoby for Artsy.

Later that evening, Sotheby’s achieved more modest prices at its Contemporary Art Evening Sale, where the total takings of £36.4million ($56.3million) came in just above the sale’s low estimate of £32.9 ($52.9 million). Seventy-two percent of lots sold. The sale’s top result was Jean-Michel Basquiat’s Untitled (the Black Athlete) (1982), which went for a mid-estimate £4.1 million ($6.3 million)—the piece went unsold last time it came to auction, 11 years ago. Sotheby’s rounded off its big week with Friday’s Contemporary Art Day Sale, where Roy Lichtenstein’s pixelated Hot Dog went for £449,000 ($695,097), more than double its low estimate and an untitled Anish Kapoor dish sold for an above-estimate £461,000 ($713,674).

“We have definitely seen in London an extraordinary level of numbers across the week; so many of the world’s top collectors were here,” said Alex Branczik, Sotheby’s Head of Contemporary Art, London. “Frieze definitely attracts an incredible crowd, and we’ve certainly benefitted from that. Conversely, there’s a lot of art on the market at the moment, and a lot of choice as well.”

Phillips sold an impressive 100% of its lots at its Contemporary Evening Sale on Wednesday, netting £31.5 million ($47.8 million) that night, and totaling £38.5 million ($58.6 million) for the entire week. The top lot was an untitled Cy Twombly from 2006, which changed hands for £7.9 million ($12 million), just below its low estimate of £8 million ($12.4 million). The evening featured work from the estate of the late plastic surgeon Dr. Frederic Brandt—which Phillips had won a competition to sell by guaranteeing a third-party minimum price for the work. (It was just one lot of a rumored half of the sale to be guaranteed.)

In doing so, the auction house evidenced what The New York Times called last month the “proliferation of high value guarantees…and the complex financial arrangements that go with them.” Such situations may necessitate a third party partnering with an auction house to anonymously maintain minimum prices during an auction, guaranteeing a certain spend on a transaction.
“We utilized a guarantee to help us win the business,” said Matt Carey-Williams, Phillips’s Deputy Chairman, Europe & Asia, of the Brandt deal. “We partnered with someone on a third-party guarantee basis to get that done. It was an individual. Guarantees, whether in-house or third-party, are a vehicle that we use at all auction houses to enable us to win the consignments that we win.”
—Rob Sharp
Related Stories