The Long, Collaborative Friendship of Yayoi Kusama and Donald Judd 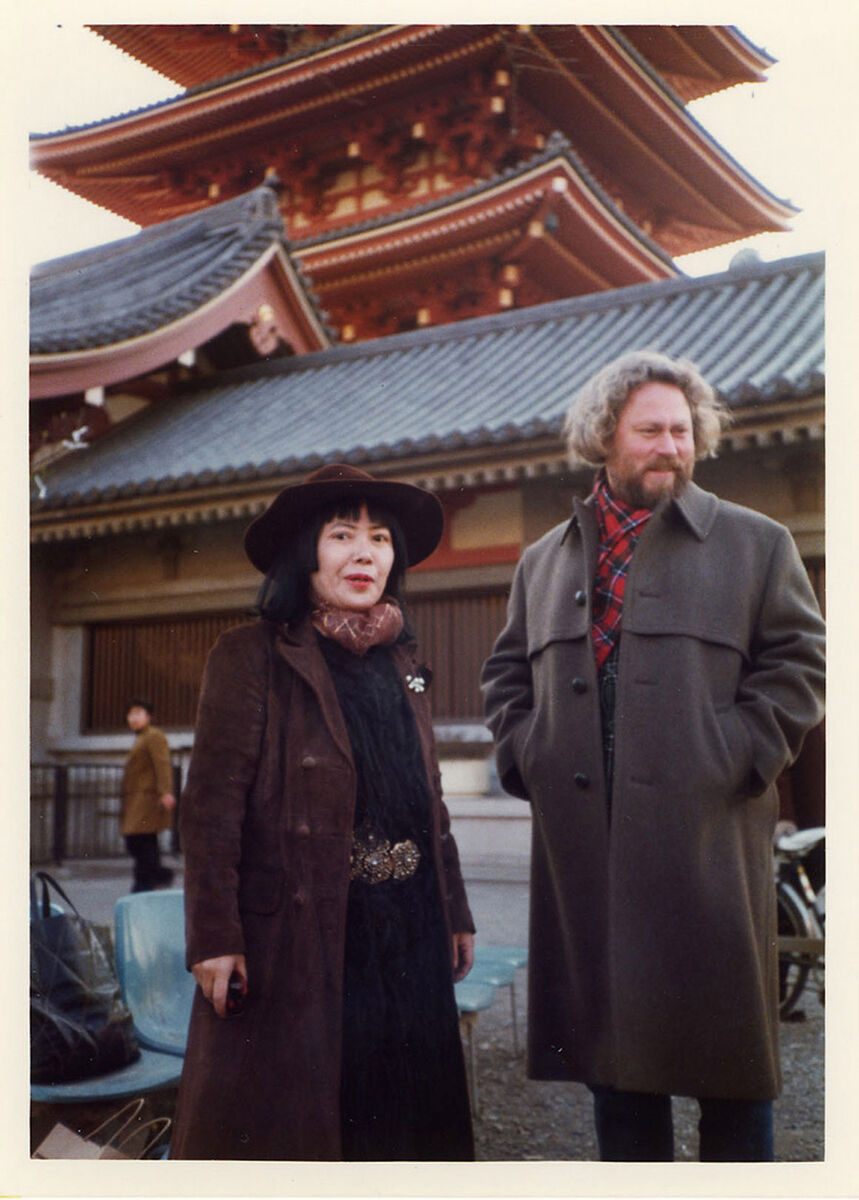 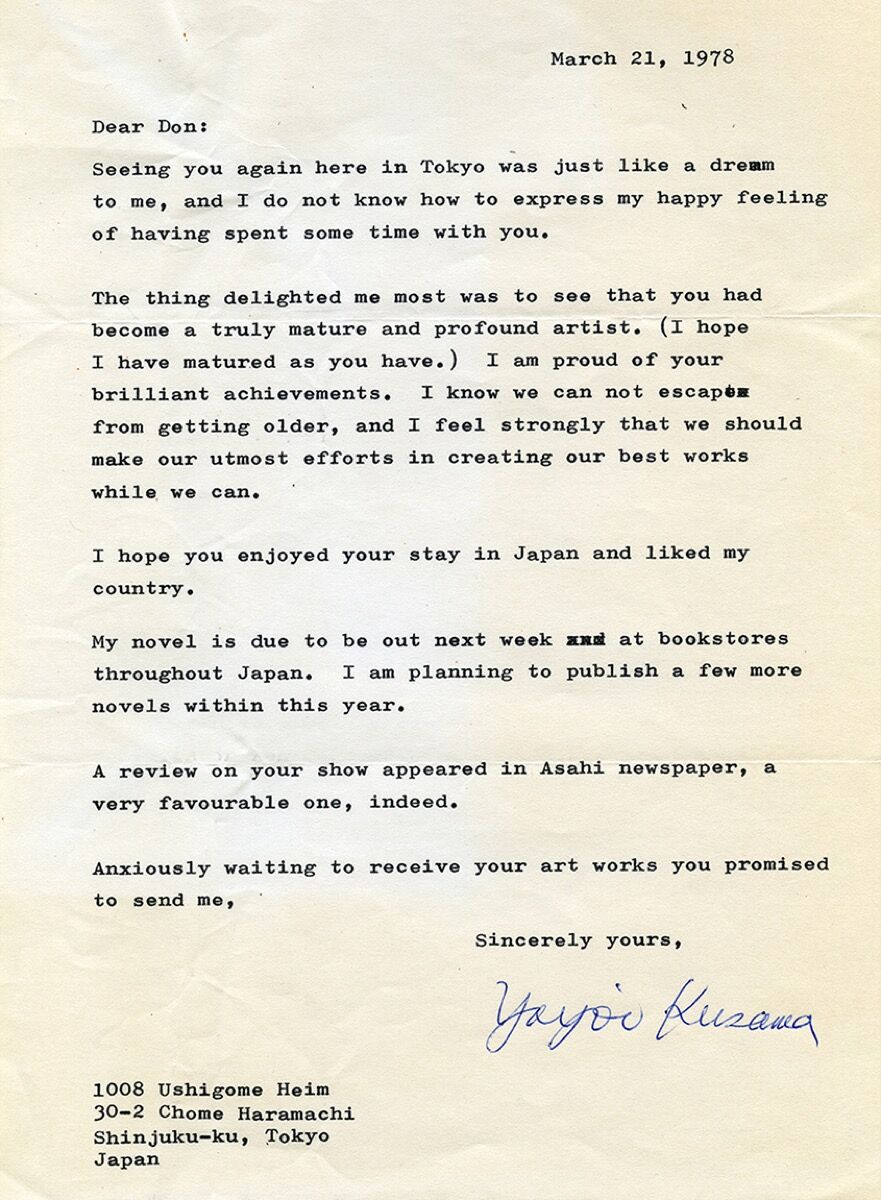 If you’d been strolling around downtown Manhattan in 1962, you might have seen artists
Yayoi Kusama
and
Donald Judd
lugging an oversized armchair down the block.
That piece of found furniture would become the base for one of Kusama’s first and most iconic sculptures: Accumulation No. 1. (1962), a hulking form coated in stuffed, phallus-shaped accretions. The work has become a paragon of
Pop Art
and a highlight of Kusama’s recent blockbuster retrospectives. It also represents a more subtle force in Kusama’s practice—her friendship with the
Minimalist
pioneer Judd.
This relationship provides the inspiration for a new show of Kusama’s paintings at the Judd Foundation’s 101 Spring Street space in Manhattan. The exhibition itself is spare—four of Kusama’s abstract canvases hang elegantly on the ground floor of the building, which was Judd’s home and studio for many years, and now operates an archive and museum. But it opens up a rich subject that’s been largely overlooked by scholarship exploring 1960s New York art: Kusama and Judd’s influence on one another. 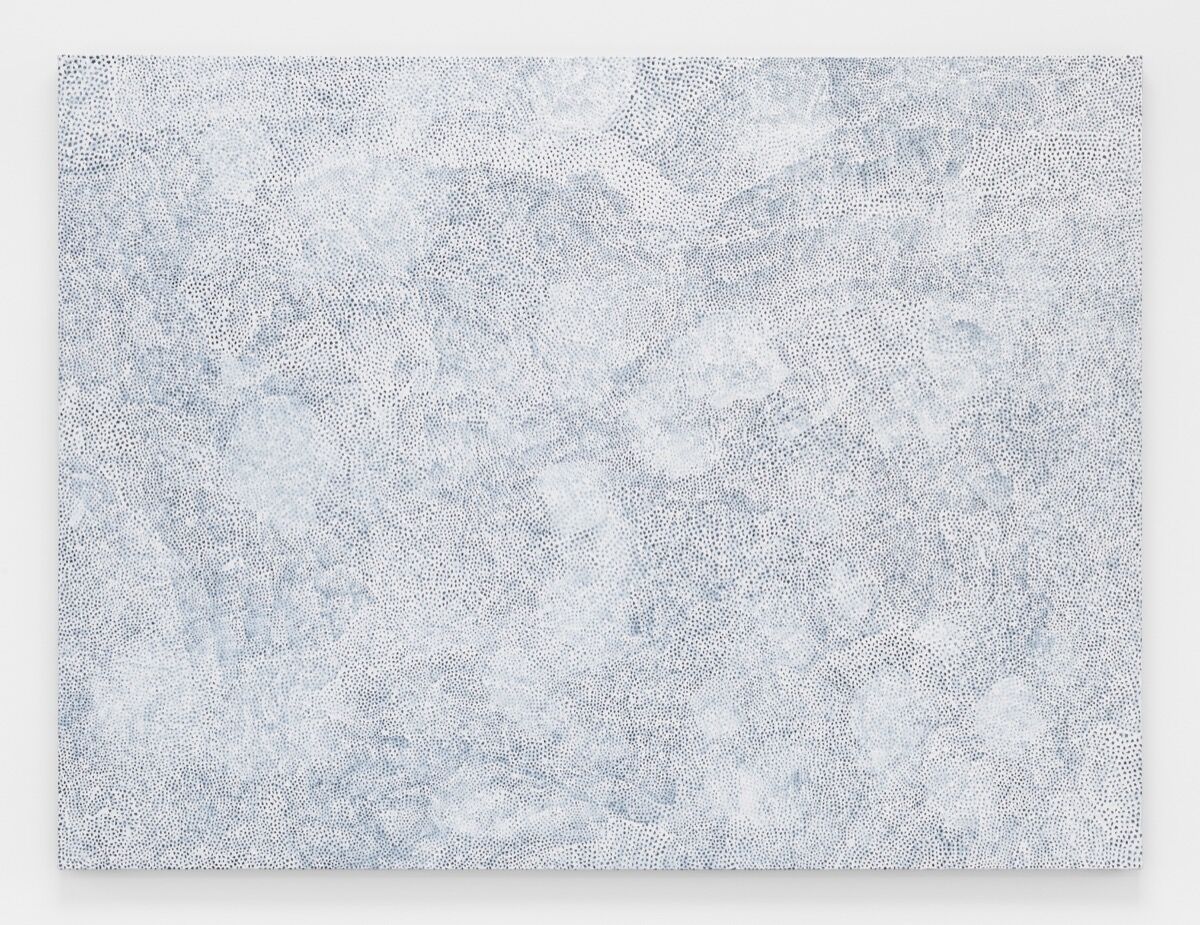 The two artists met in the late 1950s. In the fall of 1959, Kusama had her inaugural New York solo show at Brata Gallery. There, she unveiled early pieces from her ongoing “Infinity Net” series: allover abstract compositions built from small white circles that are repeated in dense repetition. Judd, who’d recently been hired as a critic at ARTNews, reviewed the exhibition.
The first lines of the article (a delightfully smudged, handwritten draft of which is housed in the Judd Foundation archives) read: “Yayoi Kusama is an original painter. The five white, very large paintings in this show are strong, advanced in concept and realized. The effect is both complex and simple.”
That might seem like understated praise, but it’s a “rave review in Judd language,” explains Flavin Judd, Judd’s son, who curated the Kusama exhibition at the Foundation. (In homage to the Brata Gallery show and its impact on Judd’s work, the installation here also pulls from the white “Infinity Net” series, albeit later versions made between 2014 and 2017.)
Judd, a father of Minimalist art, was just getting his start in the late 1950s, and Kusama’s Brata Gallery paintings struck him. “They helped him find a way through his work—and a direction out of representational painting,” explains Flavin. “He starting to make his flat plane paintings around the same time.”
Judd even scored a painting from the show—for $200. “Donald Judd was my first close friend in the New York art world and he was the first to buy one of the pieces in the exhibition,” Kusama wrote in her autobiography. 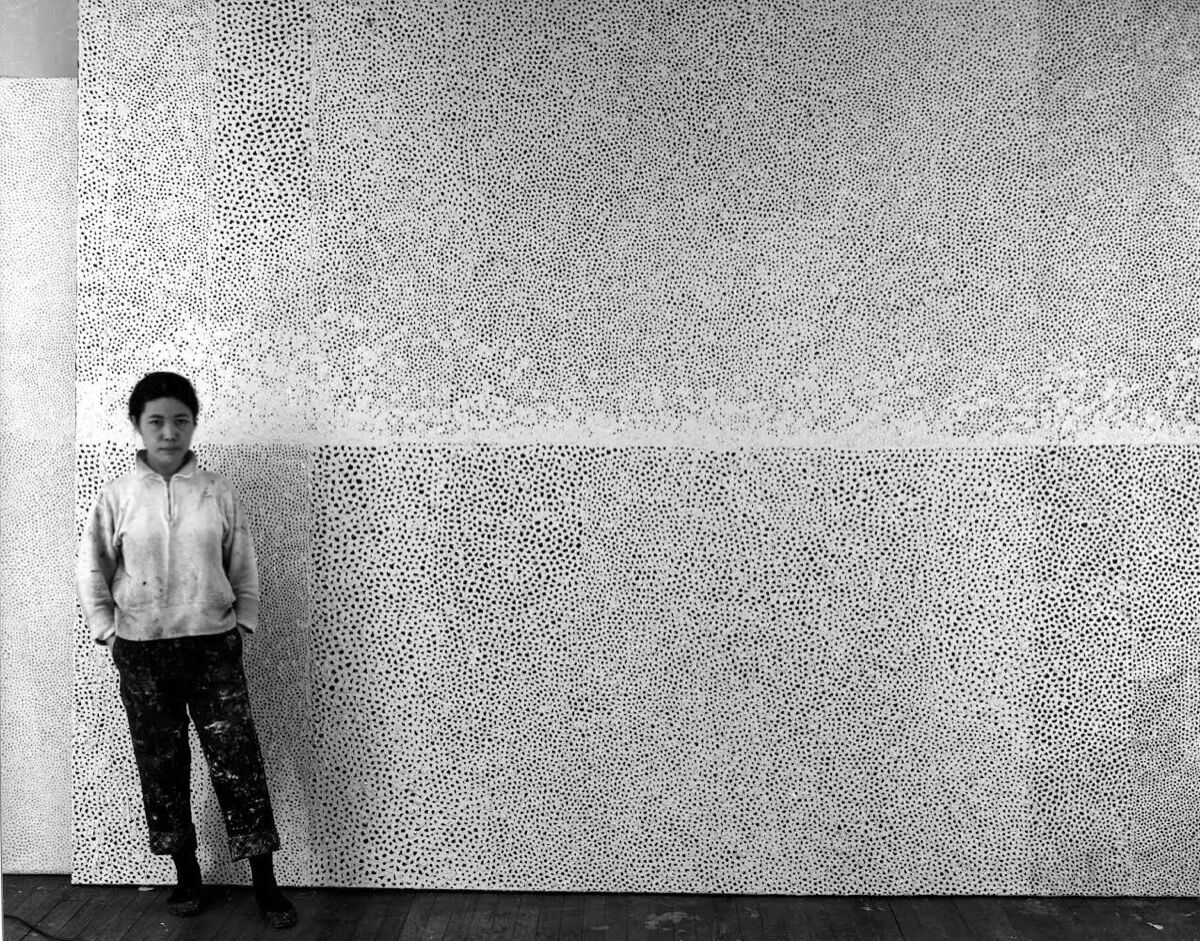 Advertisement
The relationship between the two artists didn’t end there. By the early 1960s, they were living in the same Manhattan building at 53 East 19th Street, separated by a floor. In a 1988 interview unearthed by the Judd Foundation for the exhibition, Donald recounted how he ended up there: “The fourth floor became vacant and [Kusama] told me about it. And so I got the loft and I lived there for 10 years or more because of her. So she was the neighbor downstairs.”
It was to that building that Kusama and Judd carted the armchair that would become Accumulation No. 1., together stuffing the sculpture’s lumpy protrusions—an event which Kusama scholar Lynn Zelevansky, who will give a lecture at the Judd Foundation on October 30th, recalls Kusama mentioning often during their conversations.
Both Zelevansky and Flavin Judd note a particular synchronicity in when the two artists began experimenting with sculpture. “They were within 20 feet of each other, and they both started making objects at the same time—really strong objects that didn’t look like anybody else’s work,” says Judd. “It’s pretty amazing.”
Eventually, the two artists left their neighboring 19th Street lofts. Judd made his way to 101 Spring Street, where he lived with his family and set up his studio, while Kusama went back to Japan, where she was born. Their creative exchange continued despite both the distance and their increasingly divergent styles. While Judd’s work became more angular and minimal, Kusama’s evolved to be increasingly figurative and playful. 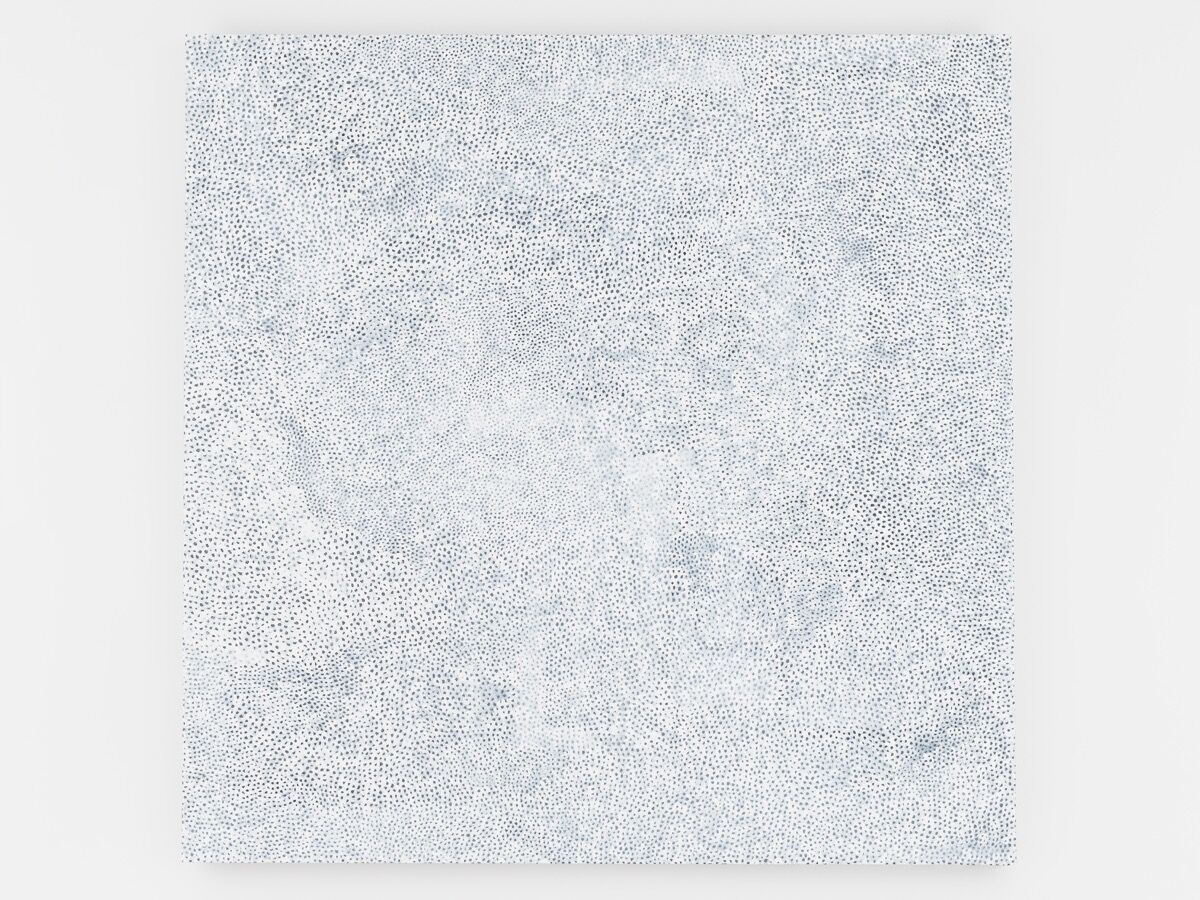 “I thought that those would be directions Judd wouldn’t have much sympathy for,” explains Zelevansky. “But he remained her friend and supporter.” Judd later installed an early ceramic sculpture by Kusama, which she gave to him, in the library of his home in Marfa, Texas.
The admiration was mutual. In a 1978 letter from Kusama to Judd, sent after he visited her in Japan, she writes: “Seeing you again here in Tokyo was just like a dream to me. [...] The thing [that] delighted me most was to see that you had become a truly mature and profound artist. (I hope I have matured as you have.)” She closed the letter with a pointed, albeit loving sign-off: “Anxiously waiting to receive your artworks you promised to send me.”
Their correspondence continued until Judd’s death in 1994. But Judd and Kusama’s profound, mutual influence live on in the ideas, letters, and artworks exchanged between them, now brought to light in this small but essential show.
Alexxa Gotthardt
Related Stories