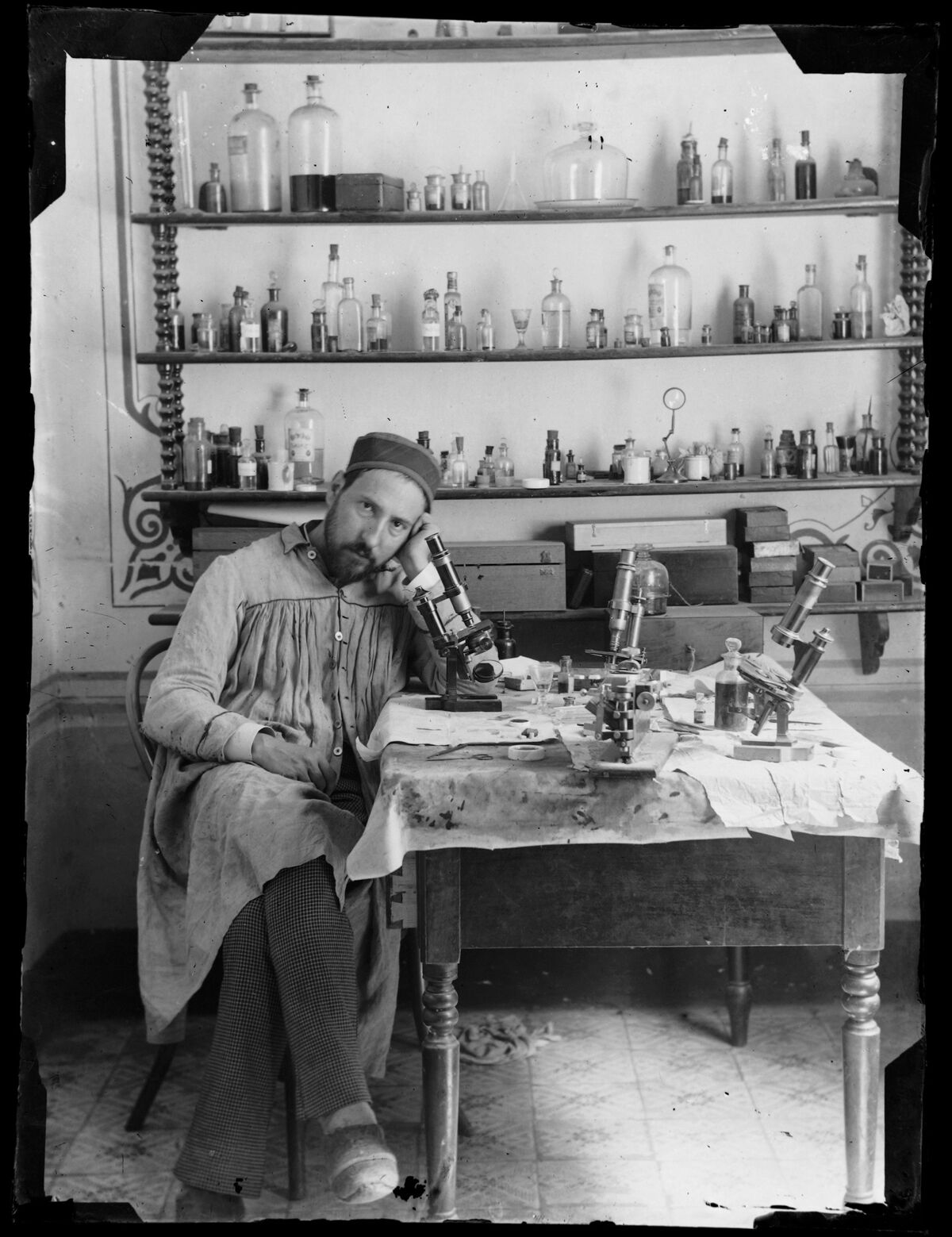 Self-portrait of Santiago Ramón y Cajal, taken by Cajal in his laboratory in Valencia when he was in his early thirties, c. 1885. Courtesy of Cajal Institute (CSIC), Madrid. 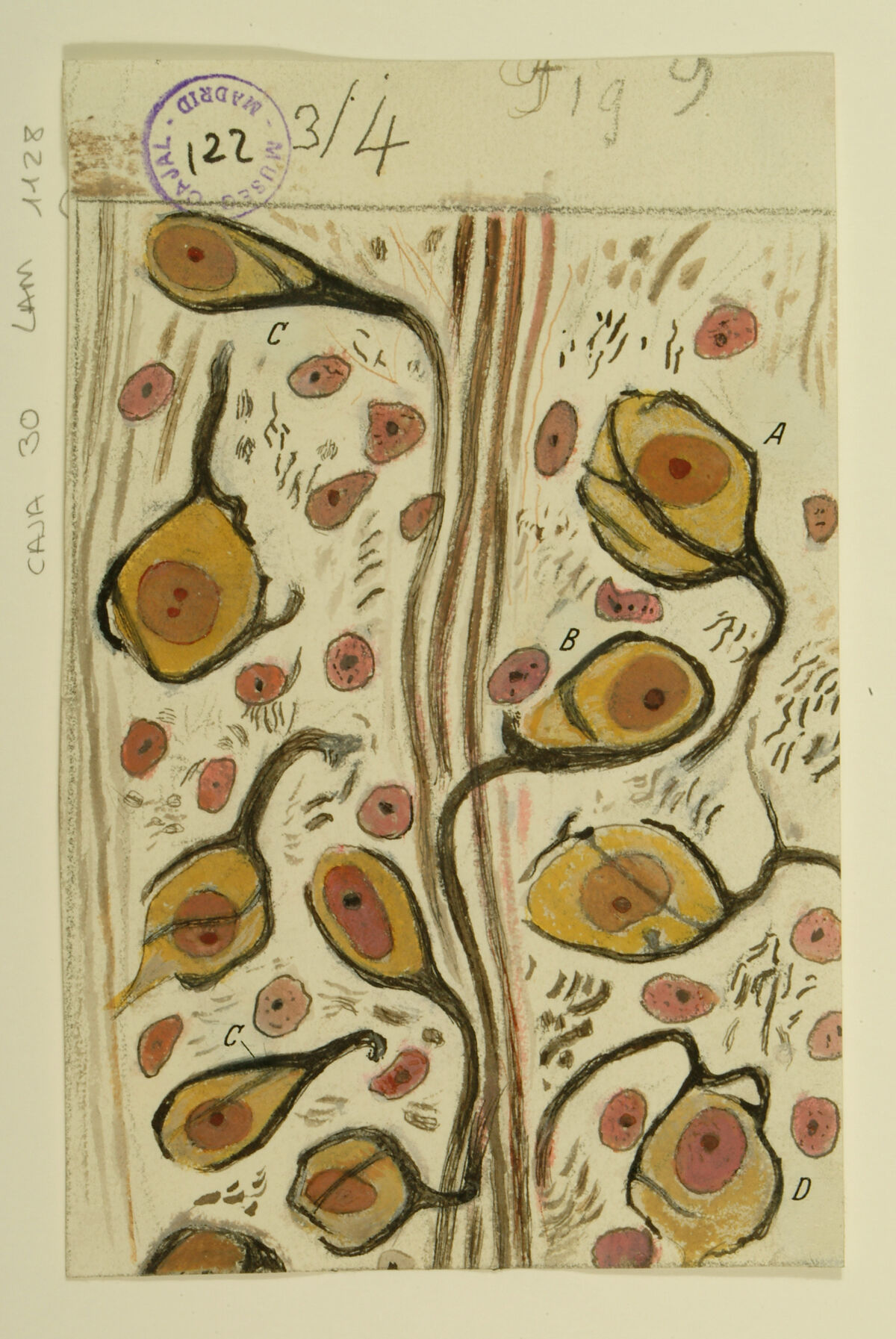 Santiago Ramón y Cajal, Calyces of Held in the nucleus of the trapezoid body, 1934. Courtesy of Cajal Institute (CSIC), Madrid.

A century ago, alone in a cluttered private laboratory at his home in Madrid,
Santiago Ramón y Cajal
was exploring a new world. Its exotic trees and ferns sported branches and roots that intertwined in dense lattices, while strange, one-eyed creatures wrapped filamentous tentacles around each other. Although the strangeness of this landscape surpassed even the science fiction books Cajal favored, it was no fantasy. Through the lens of his microscope, he was looking at the world of the brain—the complex circuits of nerve cells, called neurons, that give rise to our senses, our emotions, and perhaps even to consciousness itself.
Cajal painstakingly mapped this “neuronal jungle” in exquisitely detailed drawings, charting the features of different types of brain cells, their stages of growth, and how they are organized. His hands became “precision instruments,” he once said, producing “strange drawings, with details that measure thousandths of a millimeter…[that] reveal the mysterious worlds of the architecture of the brain.”
Now, American viewers are getting a chance to see Cajal’s drawings for the first time. An exhibition titled “The Beautiful Brain: The Drawings of Santiago Ramón y Cajal” is currently on view at New York University’s Grey Art Gallery; it will move to the Massachusetts Institute of Technology in April. The show, which features some 80 drawings—most of which have never been seen outside Spain—illuminates Cajal’s fantastic voyage into the brain. Layers of interconnected cells, labeled with arrows and letters, demonstrate how sights and sounds are conveyed by nerve impulses from the outer cells of the eye and ear to cells deep inside the cerebral cortex. The complexity and delicacy of the drawings are simultaneously amazing and uncanny, observed Roberta Smith in the New York Times: “It’s not often that you look at an exhibition with the help of the very apparatus that is its subject.” 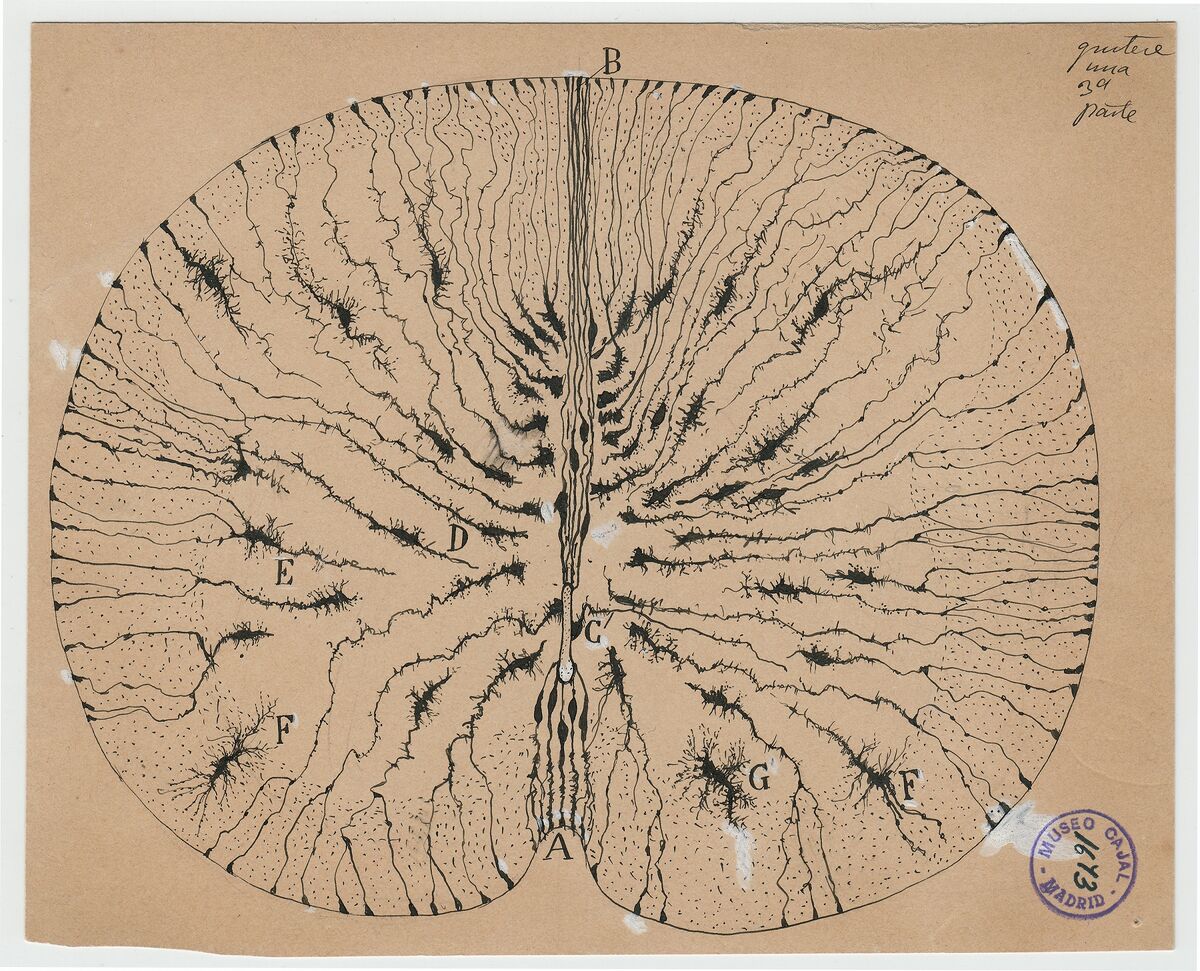 “The Beautiful Brain” dramatically reveals the twin aspects of Cajal’s genius: the scientific brilliance that earned him a Nobel Prize and recognition as the father of modern neuroscience, and his unique artistic gifts—without which his monumental discoveries might have gone unnoticed.
Santiago Ramón y Cajal was born in 1852 in Petilla de Aragón, a small farming village in northeastern Spain. Growing up, Cajal had a passion for drawing and dreamed of becoming an artist. “I had an irresistible mania for scribbling on paper,” he wrote in his autobiography. “Translating my dreams onto paper, with my pencil as a magic wand, I constructed a world according to my own fancy.”
His father, the local doctor, considered art to be frivolous entertainment and fiercely opposed his son’s professional aspirations. Eventually, he persuaded the boy to assist him in a human anatomy class he was teaching at the medical school in Zaragoza. Cajal found that he enjoyed studying the human body and that he could put his exceptional drawing skills to good use in the process. He enrolled in medical school in Zaragoza and graduated in 1873, at age 21, with the intention of devoting his career to histology—the microscopic examination of body tissues. 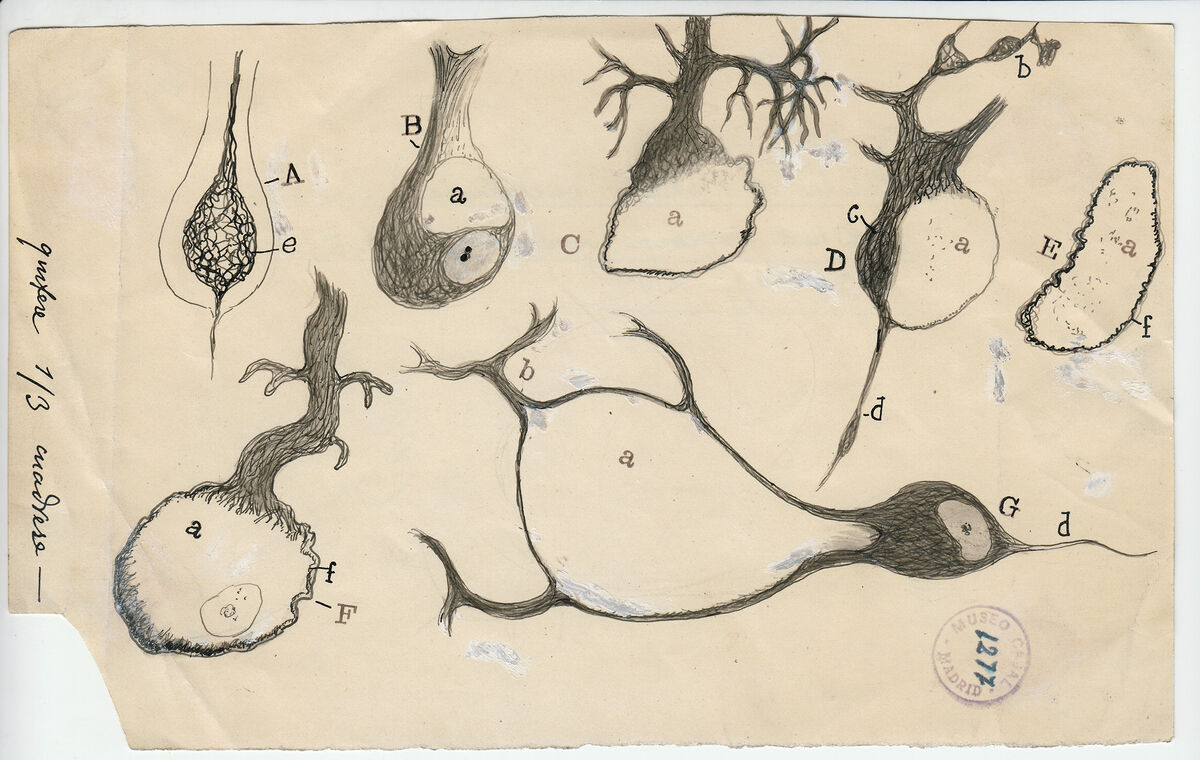 Advertisement
By the 1880s, although the tissues of most human organs had been studied in detail, the brain remained terra incognita. Even under the day’s most powerful microscopes, the mass of grey and white matter appeared as an undifferentiated blob composed of billions of indistinguishable cells. “The brain was the Holy Grail,” Benjamin Ehrlich, Cajal’s biographer, told Artsy. “Cajal and other scientists of the day believed that studying the anatomy of the brain would reveal the secrets of the mind. That’s what motivated him. When he was looking through the microscope, he was inside the world of the brain, trying to figure out how it worked.”
A turning point in Cajal’s quest came in 1887, when he saw a microscope slide of nervous tissue that had been stained using a new method developed by Italian pathologist Camillo Golgi. Golgi-staining allowed individual brain cells to be seen for the first time. Using the technique, Cajal could finally peer through the dense neuronal forest to see that it was composed of individual trees—neurons, with branching dendrites, where signals enter the cell; a cell body, where the signals are processed; and a root-like axon, where impulses are transmitted to the dendrites of neighboring cells, enabling them to talk to each other. No one had observed or described individual brain cells before, and Cajal’s findings were not immediately accepted. What became known as his “Neuron Doctrine” ran counter to the agreed-upon theory that the brain was structured as a continuous network rather than a series of separate cells. 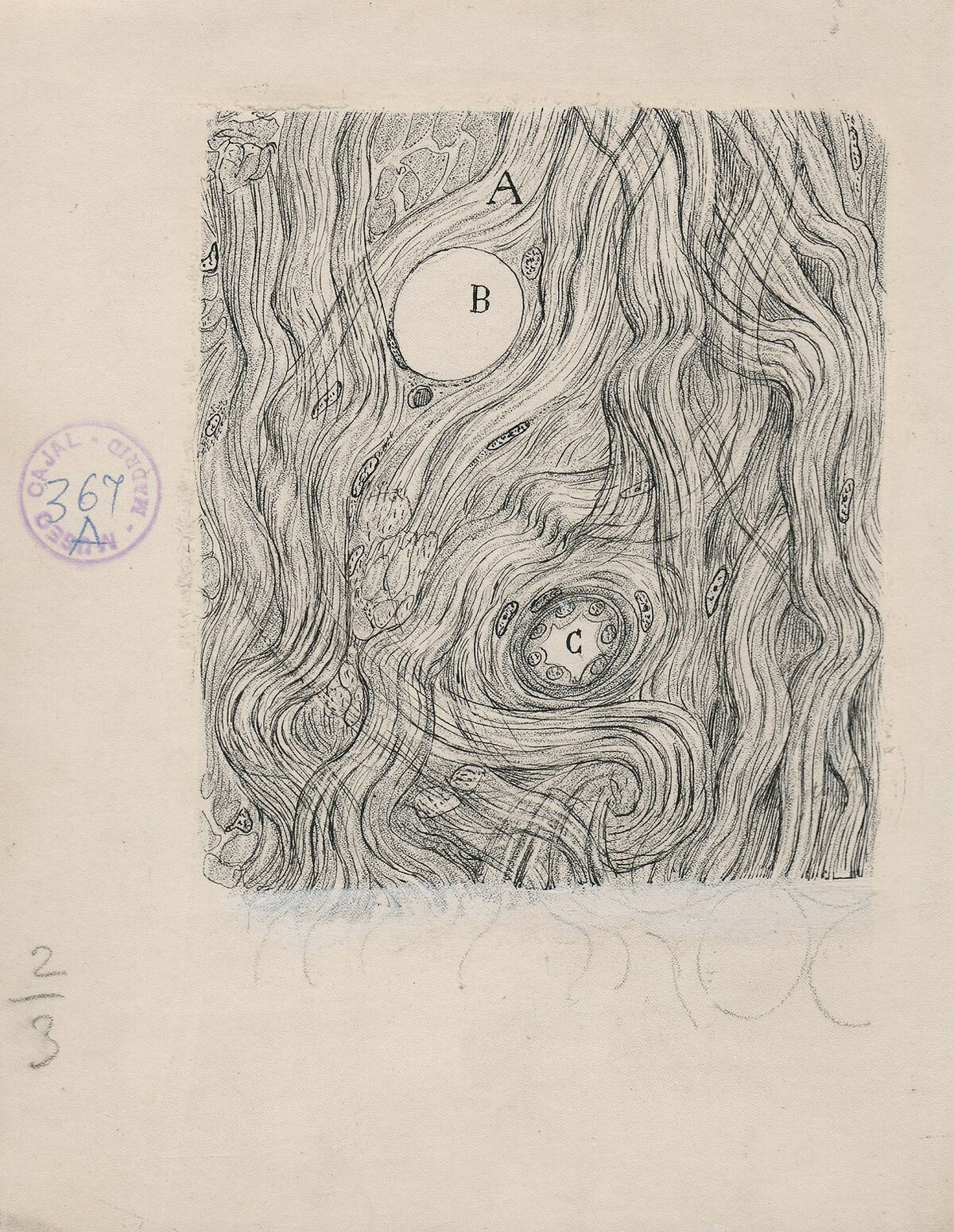 Inspired by what he saw, Cajal worked “with a fury,” typically spending 15 hours a day staring into the microscope and recording his observations. Over the course of five decades, he amassed nearly 3,000 drawings. He drew freehand in pencil, later going over the sketches in India ink and washes. He seldom made mistakes; in the drawings at the Grey, whited-out lines and corrections are rare.
Even more than the magical Golgi stain, it was Cajal’s trained eye that made this groundbreaking achievement possible. “Golgi and many other scientists in Europe were looking at the same tissue, with the same stain, in the same way, but only Cajal was able to see structure inside of that stained tissue,” said Carl Schoonover, a neuroscientist at Columbia University. “He was able to see and analyze these extremely difficult-to-see shapes, then communicate his findings through these beautiful drawings.”
For the discovery of the neuron, the basic building block of the brain, Cajal would eventually share the Nobel Prize in Medicine with Golgi in 1906. “Like Einstein in physics, Cajal defined the parameters of modern neuroscience,” Schoonover said. “The specific cellular features of the neurons and how they’re arranged, which he drew so beautifully, is monumental.” 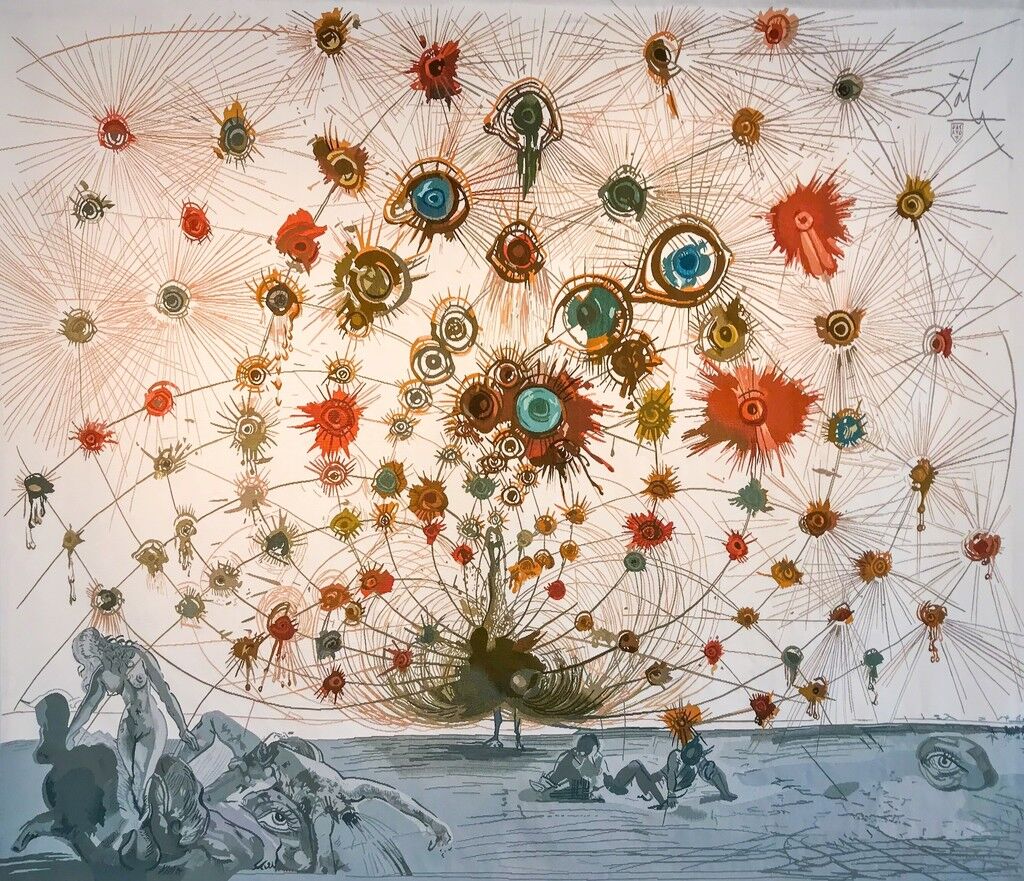 Salvador Dalí
Argus
Russell Collection
Cajal followed the path of a scientist, not an artist. But his drawings—reproduced more widely after he won the Nobel Prize—soon attracted the attention of the artistic avant-garde. Consciously or not, forms resembling the dendrites and axons of neurons began to be reflected in the automatic drawings of the French
Surrealists
André Masson
and
Yves Tanguy
.
Spanish Surrealists
Salvador Dalí
, Federico García Lorca, and Luis Buñuel encountered Cajal and his work in the mid-1920s, while university students at the Residencia de Estudiantes in Madrid. Cajal, by then at the height of his career and a venerated figure in Spain, was president of the board for the extension of studies and scientific research, which funded students at the Residencia. He’d helped strengthen a curriculum of interdisciplinary studies there, which exposed scientists to art and artists to science. Buñuel, who had a fascination with entomology, actually worked briefly in the lab of naturalist Ignacio Bolívar. There, he studied bugs’ eyes under a microscope. (It’s unclear whether this experience influenced the famous scene of a razor slicing an eye in his iconic 1929 film Un Chien Andalou.) 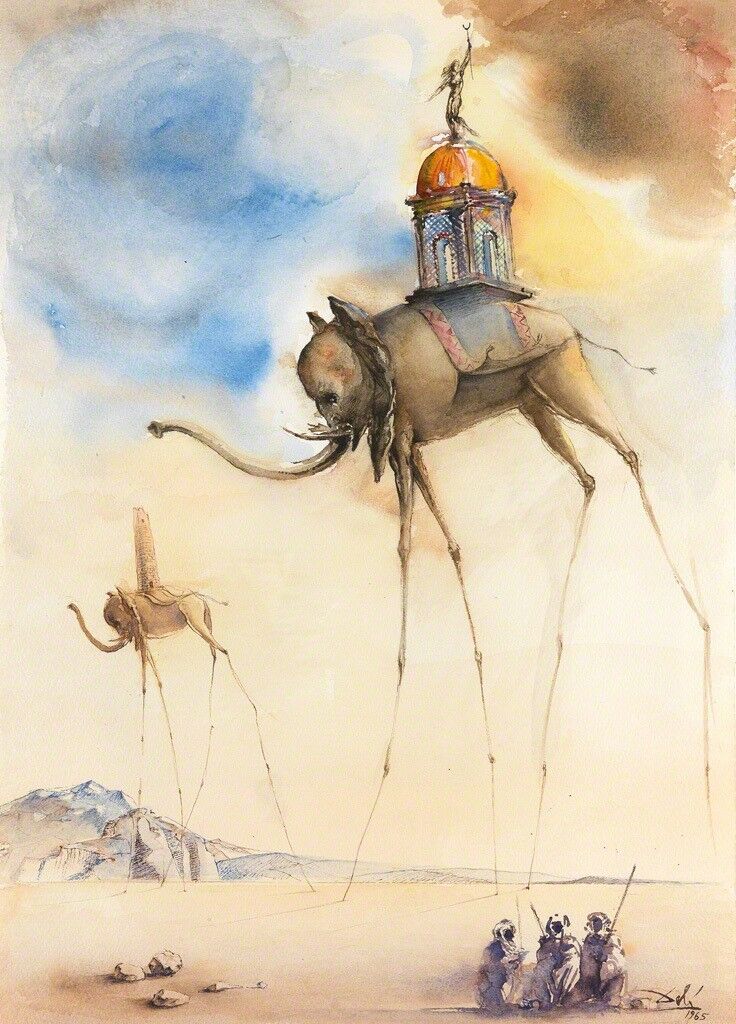 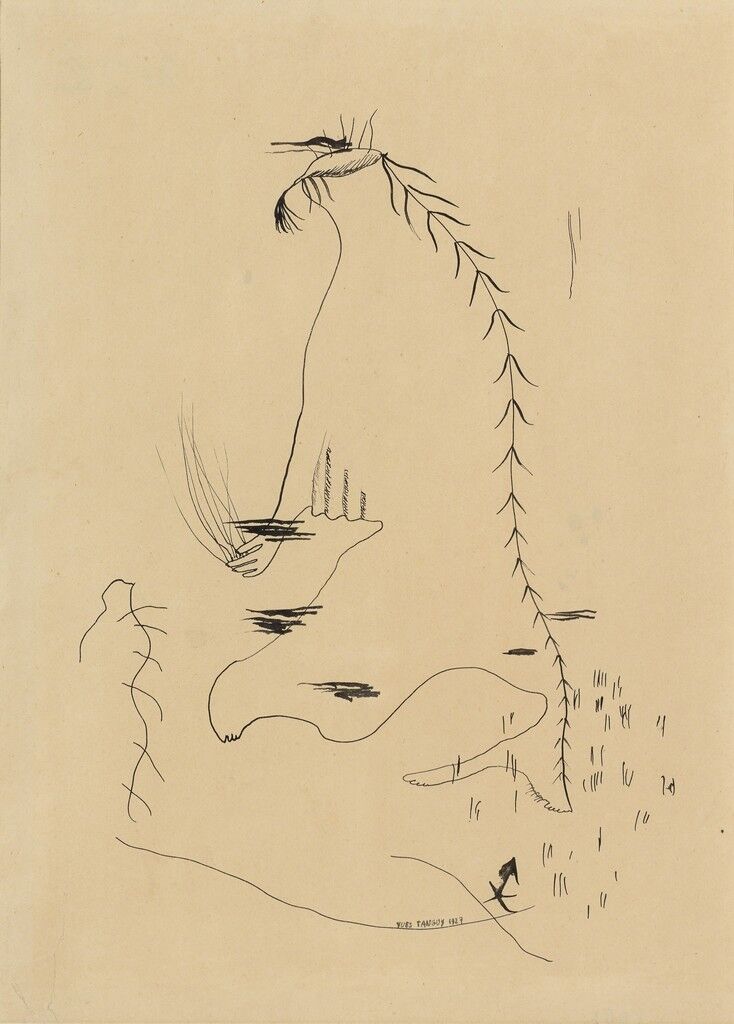 Yves Tanguy
Dessin Automatique (Automatic Drawing), 1927
DICKINSON
Obsessed by the desire to depict the inner truths of the human psyche, the Spanish Surrealists formed a natural kinship with Cajal. Although none of the young artists ever met the respected scientist, dendrites and axons were soon sprouting from human bodies and elephants in Dalí’s paintings. Lorca often paired his poems with his own drawings of filamentous forms closely resembling Cajalian imagery, including the numbers, letters, and arrows common in his histological drawings.
Although he possessed a rich imagination, reading science fiction and even writing two sci-fi novels, Cajal was generally conservative in his aesthetic tastes. He was no fan of modern art, disparaging it as “a contradictory jumble of schools that have christened themselves with the pompous names of avant-garde,
Cubism
,
Expressionism
,
Fauvism
,
Post-Impressionism
, etc.” Nor did he support the Surrealists’ interest in Freudian dream interpretation. Regarding Freud as a scientific heretic, and believing that dreams had a simple, anatomical explanation, Cajal kept a dream journal throughout the last 16 years of his life, explicitly to prove Freud wrong. “I attend a diplomatic soirée and as I am leaving my pants fall down. Is it desire?” he sarcastically noted in one entry. 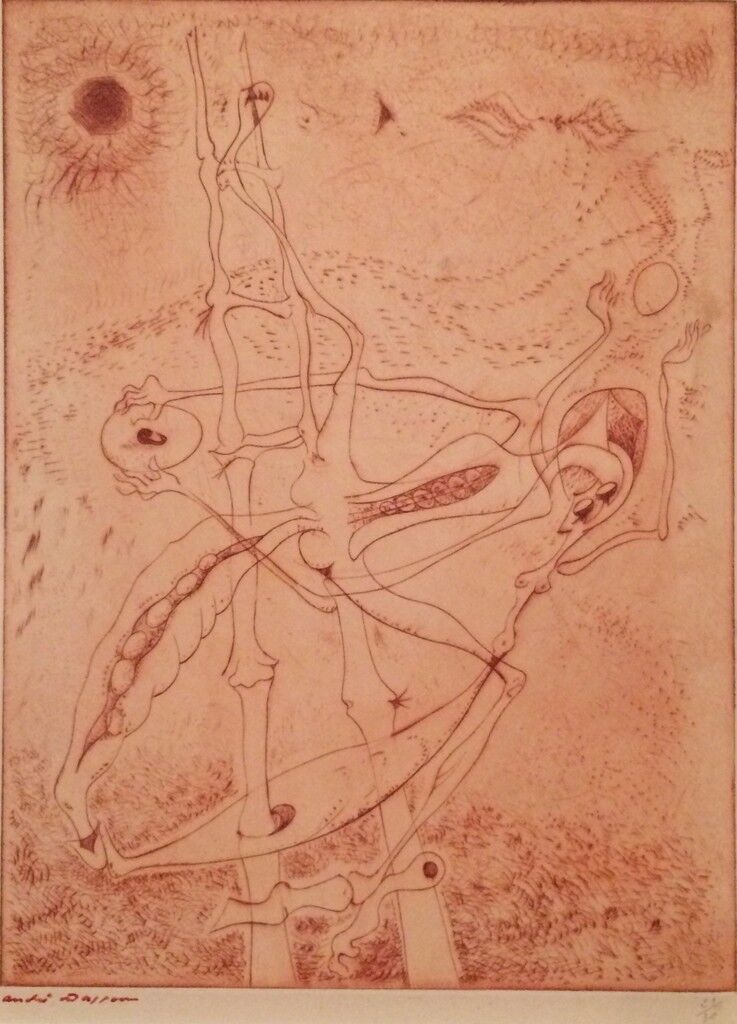 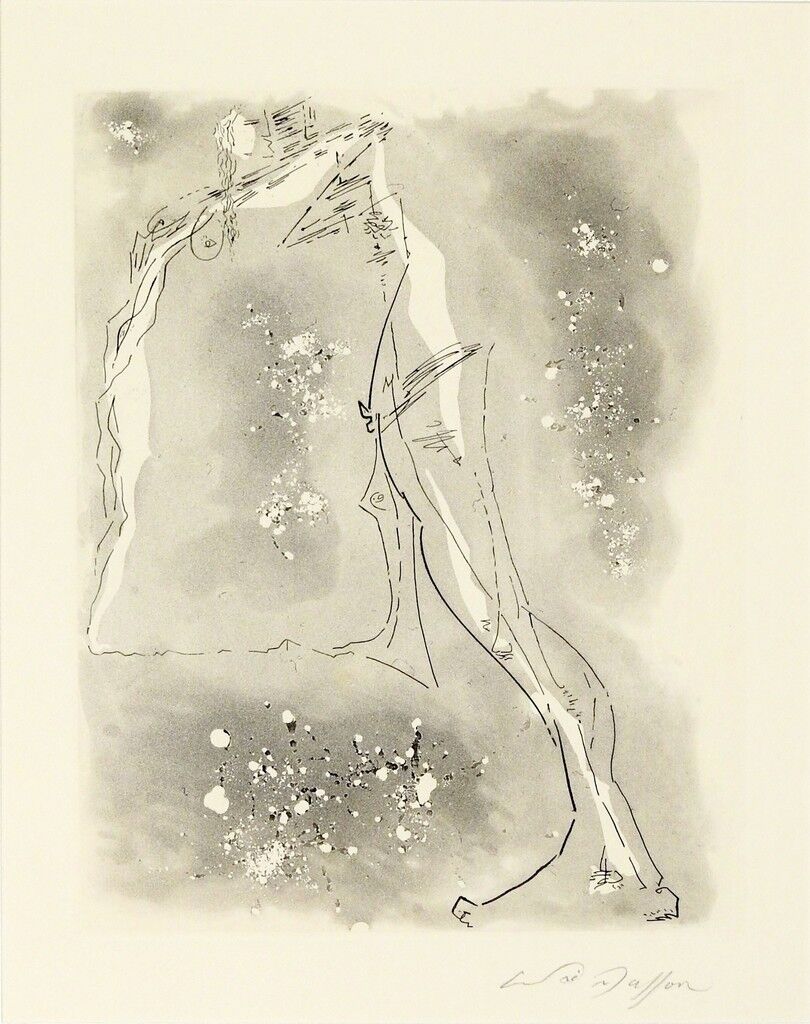 André Masson
Le Pas - série des trophées érotiques, 1962
Le Coin des Arts
Beyond his anatomical drawings, Cajal’s personal creative life centered mostly on a lifelong passion for photography. The process of developing film closely resembled the process of staining tissue, and the ability of the camera to precisely capture reality was more appealing to Cajal than the abstraction of modern art. He taught himself how to make daguerreotypes as a teenager; later, he pioneered and perfected color photography techniques and even wrote a monograph on the subject in the early 1900s. The result was a prodigious archive of photographs, some of which are on display alongside his drawings in “The Beautiful Brain.”
And these wonders of Cajal’s vision are not lost on artists today. Caitlin Berrigan—a professor of emerging media at NYU who is collaborating with neuroscientists on a project involving three-dimensional MRI imaging—was particularly struck by the architecture of neurons in Cajal’s drawings. “The illustrations speak not only about that magical web of interconnectivity that we have within ourselves,” she remarked, “but remind us how interconnected we are with the world around us.”
For artist
Teresita Fernández
, whose installations and sculptures are inspired by nature’s marvels, Cajal’s work is a reminder that science and art are not that different. “Every artwork is an experiment,” she said. “You’re looking for something that doesn’t have a form yet, that you don’t understand, a mystery. And you try to find a new truth, something you didn’t know before. That’s what Cajal did. That’s where the conversations of art and science are parallel.”
Jeff Goldberg
Related Stories 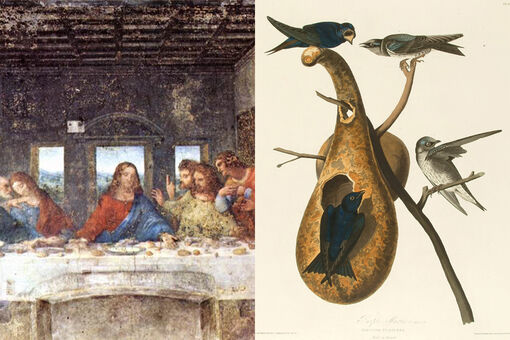 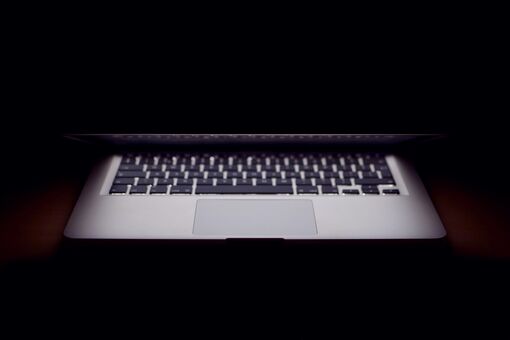 It’s Getting Hard to Tell If a Painting Was Made by a Computer or a Human
Rene Chun
Sep 21, 2017