What Louise Bourgeois’s Drawings Reveal about Her Creative Process 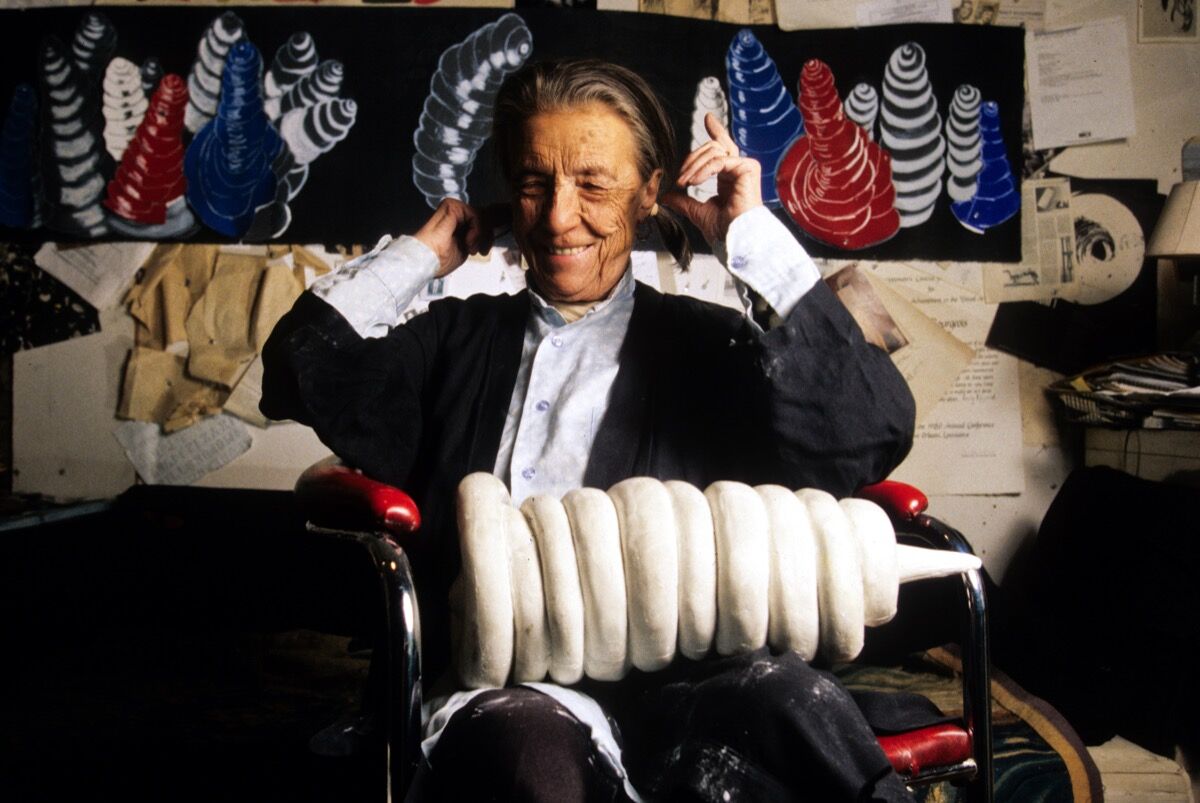 Portrait of Louise Bourgeois in her Studio in New York City, 1955. Photo by Porter Gifford/Corbis via Getty Images.

In a video on Youtube,
Louise Bourgeois
peels a tangerine. She must be 80 or 90 years old, and as she peels, she begins to demonstrate her father’s favorite dinner table parlor trick.
With palpable shame, Bourgeois recounts how her father would draw a female figure—meant to be his daughter, Louise herself—on the skin of the citrus fruit. He would meticulously scalp the girl’s image from the fruit, then expose the character’s pulpy white backside and the fruit’s core as an erect phallus, mortifying a young Bourgeois with his bathroom humor.
Much of Bourgeois’s work plumbs such memories of humiliation and anxiety, the lonely, abject moments in life. And for the French expatriate artist, the shape of the human body would not only come to manifest gender commentary, but express both pain and struggle, joy and bliss. Her sculptures—such as her iconic, nightmarish spider Maman (1999)—are known for encapsulating these charged psychological themes, but her drawings and prints, as a new exhibition at MoMA shows, played a part too. 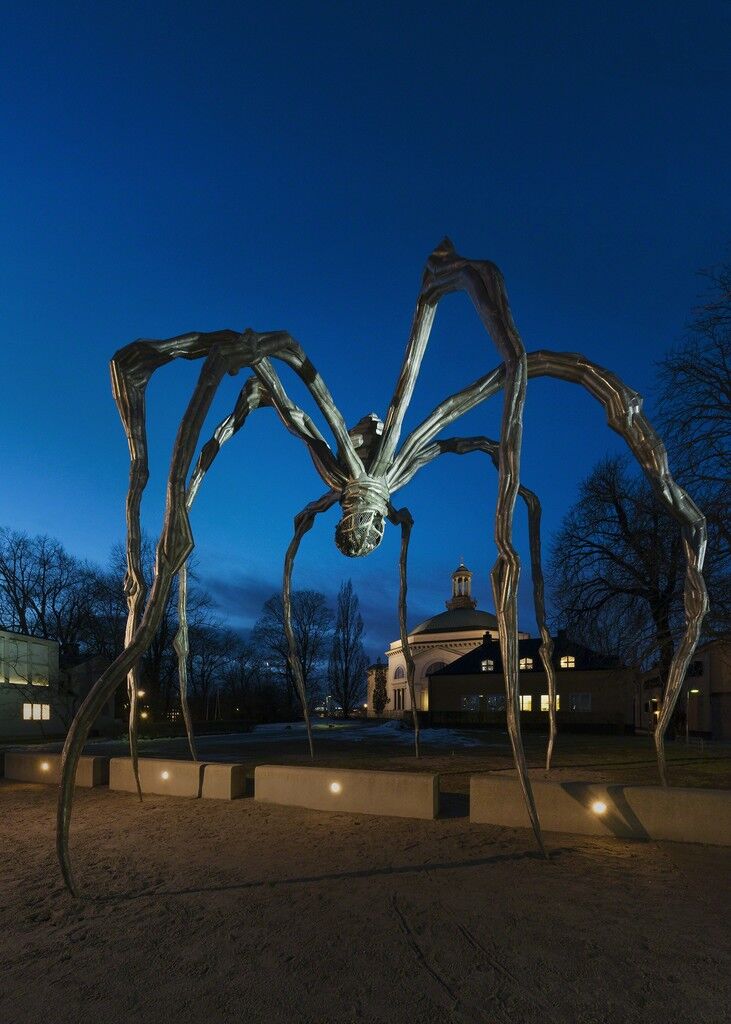 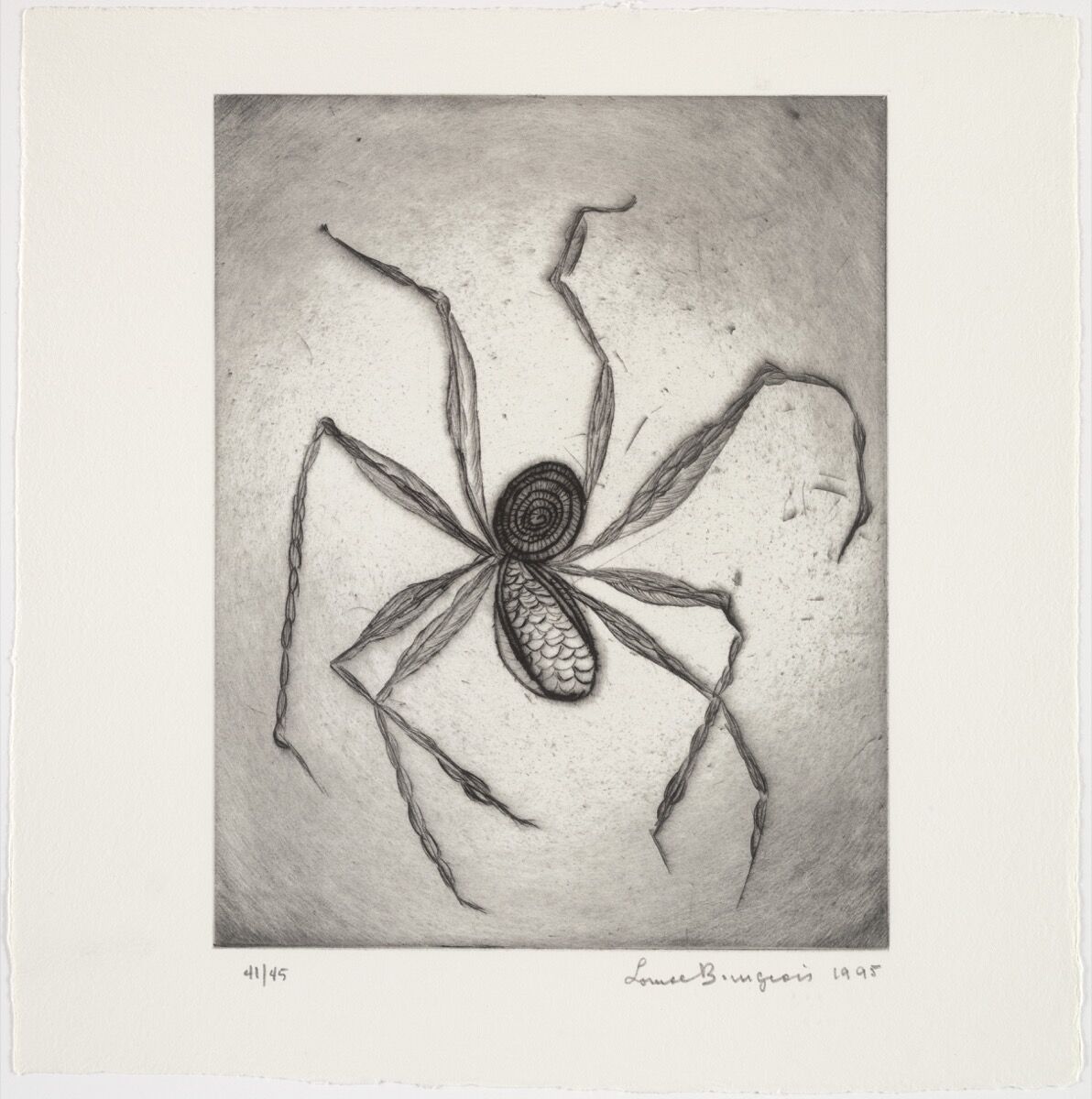 “Louise Bourgeois: An Unfolding Portrait,” opening September 24th, connects the artist’s lesser-known mediums to her sculptural work, primarily focusing on prints and books, and demonstrates just how circular Bourgeois’s creative process was. In her later career, she would return to symbols and elements of her early work often, translating sculpture to print and vice versa.
She saw no rivalry between mediums, no quest for artistic superiority. “They say the same thing in different ways,” she would say.
She created a variety of both sculptures and prints, for instance, that adhere to a totem-like, skyscraper theme. The shapes and patterns of early wood sculptures like Figure (1954) later return in Bourgeois’s oeuvre with astonishingly minimal variation in etchings like The Sky’s the Limit (1989–2003), which also features subtle watercolor and gouache additions. 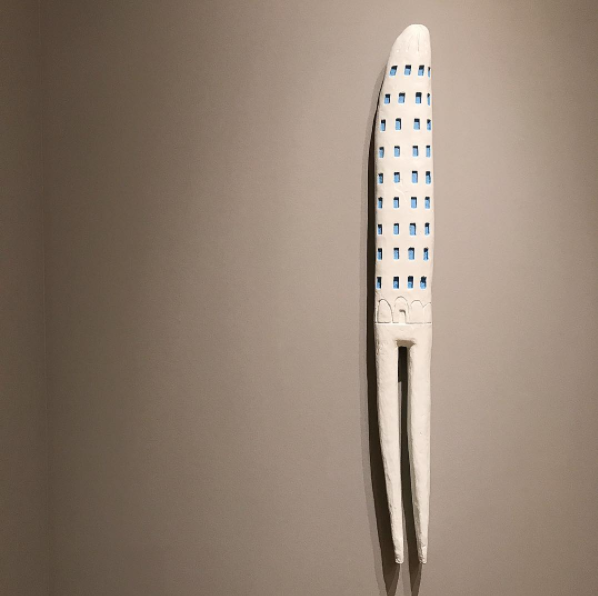 Installation view of Louise Bourgeois, Portrait of Jean-Louis, 1947-49, at the Museum of Modern Art, New York. Photo by @radicchioradicchio, via Instagram.

Advertisement
But a work like Portrait of Jean-Louis (1947–49)—a painted bronze skyscraper sculpture with long, clothespin legs extending downward that appears alongside Figure and The Sky’s the Limit at MoMA—reconfigures how we understand Bourgeois’s skyscraper motif. It’s not simply an abstraction of her New York surroundings, but a loving reference to her son, Jean-Louis, who was seven when Bourgeois created his “portrait.”
Bourgeois’s art was always a deeply personal reflection of her own history, no matter the subject. Her particular ability was to translate her own desires or anxieties into universal ones. While her sculptures are especially adept at haunting viewers, her print works exact a different approach: They do not spook, but linger—and often, they express female empowerment.
Prints like Femme (2006), for instance, appear simple, but that childlike simplicity ultimately unsettles. The Medusa-like hair of the figures slinks past the work’s borders. Likewise, the wild woman in The Laws of Nature (2006)—naked, with long hair, a pearl necklace, and high heels—cartwheels her male sexual partner around the image. With a comedic smile, she controls her lover, owning the dynamics of sex and power. 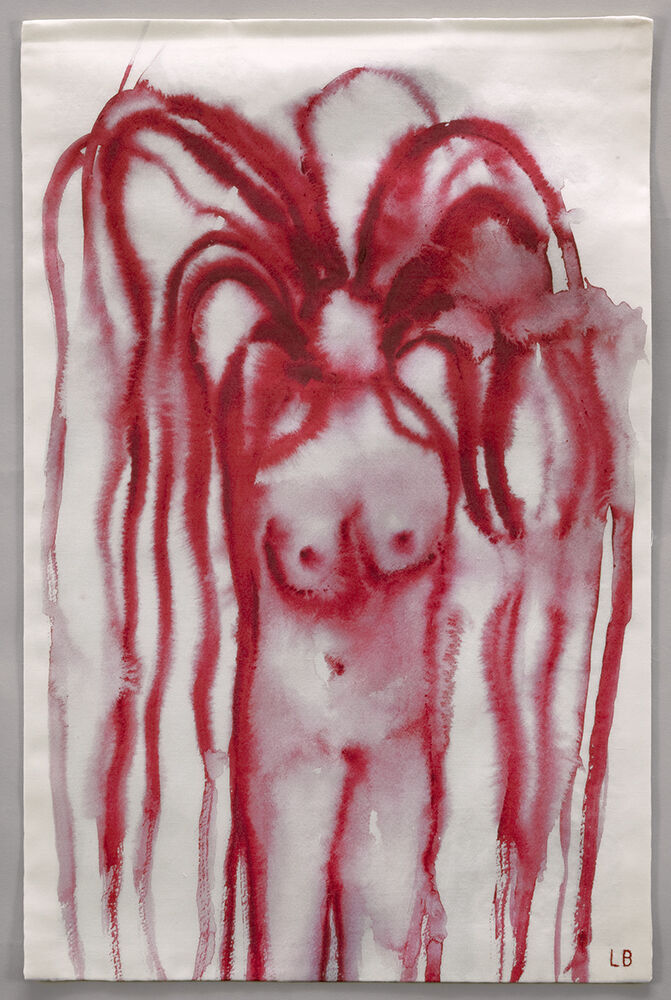 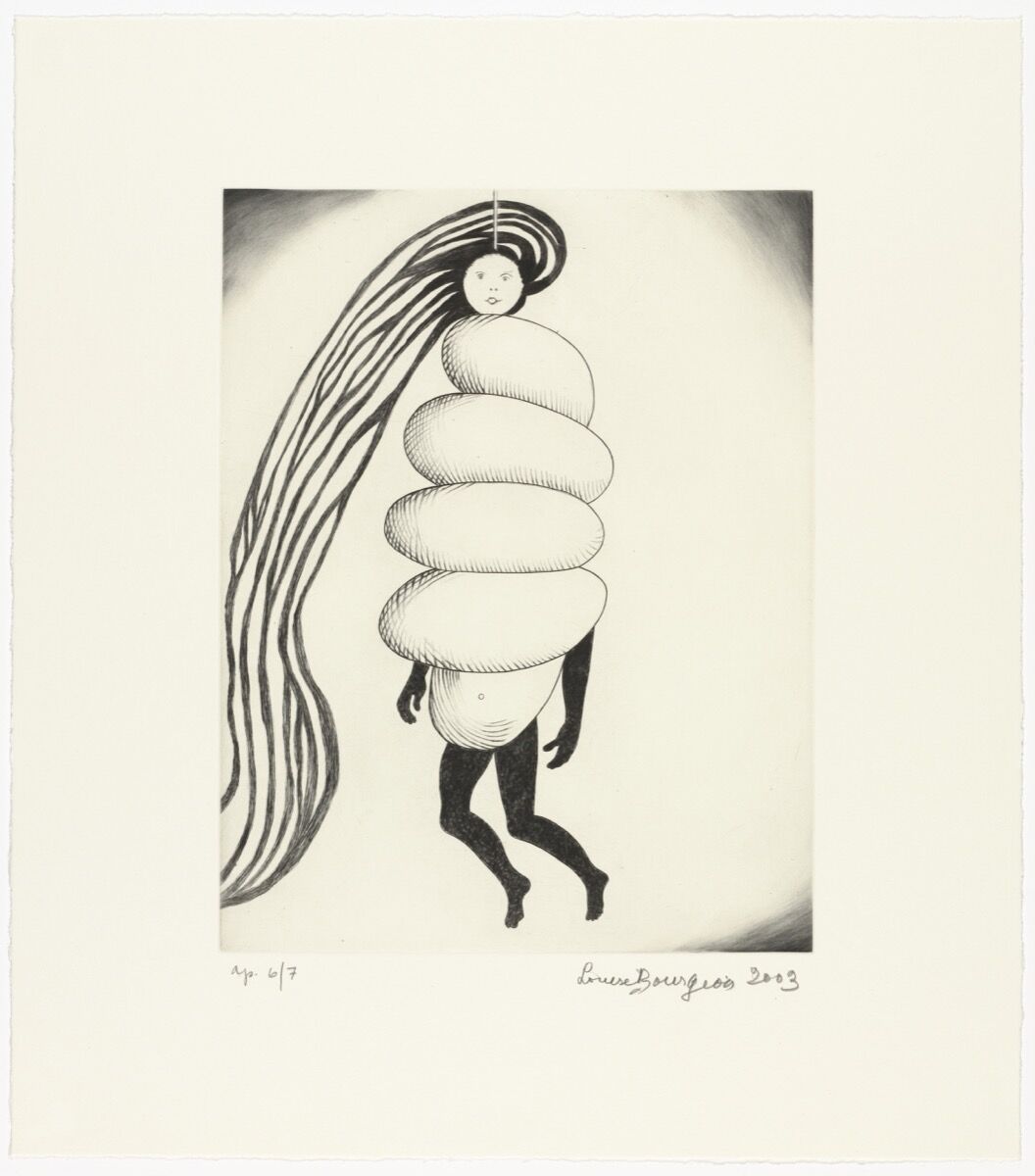 (This gender play also manifests itself in her sculptures, as in those that transform phalluses into vaginal shapes—like Janus Fleuri (1968), which takes its name from the Roman god with two faces and which combines the image of two symmetrical phalluses into a hermaphroditical crotch, complete with grooves and indents suggesting female anatomy.)
Elsewhere at MoMA, Bourgeois portrays the female forms in moments of crisis. In Sainte Sébastienne (1990–92), for instance, she allegorizes the effect of the male gaze on women. Arrows fly at the feminized saint, whose body moves to avoid the violent vectors. The male gaze effectively pulls the female body into new, contorted forms. The female figure loses her self-control when objectified by others. She may be beautiful, but at what cost?
Not all of Bourgeois’s drawings are so confrontational. Often, they recede into meditation. Created during frequent bouts of sleeplessness, Bourgeois’s insomniac drawings illuminate the artist’s use of abstract patterns in formulating her larger print and sculptural works. Containing some 220 doodles and scribbles, this body of work meanders—sometimes winking at nightmarish intestinal shapes, sometimes appearing as a schoolgirl’s scrawl during class. 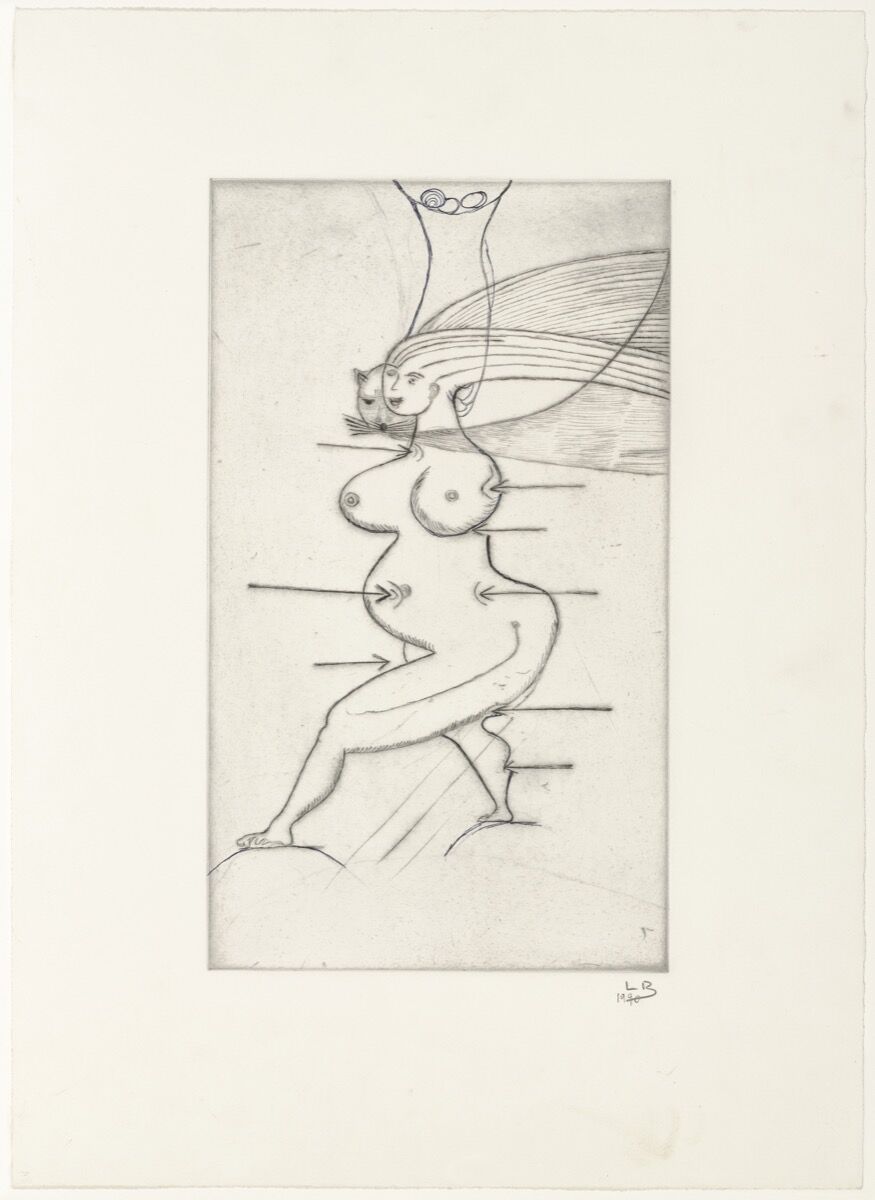 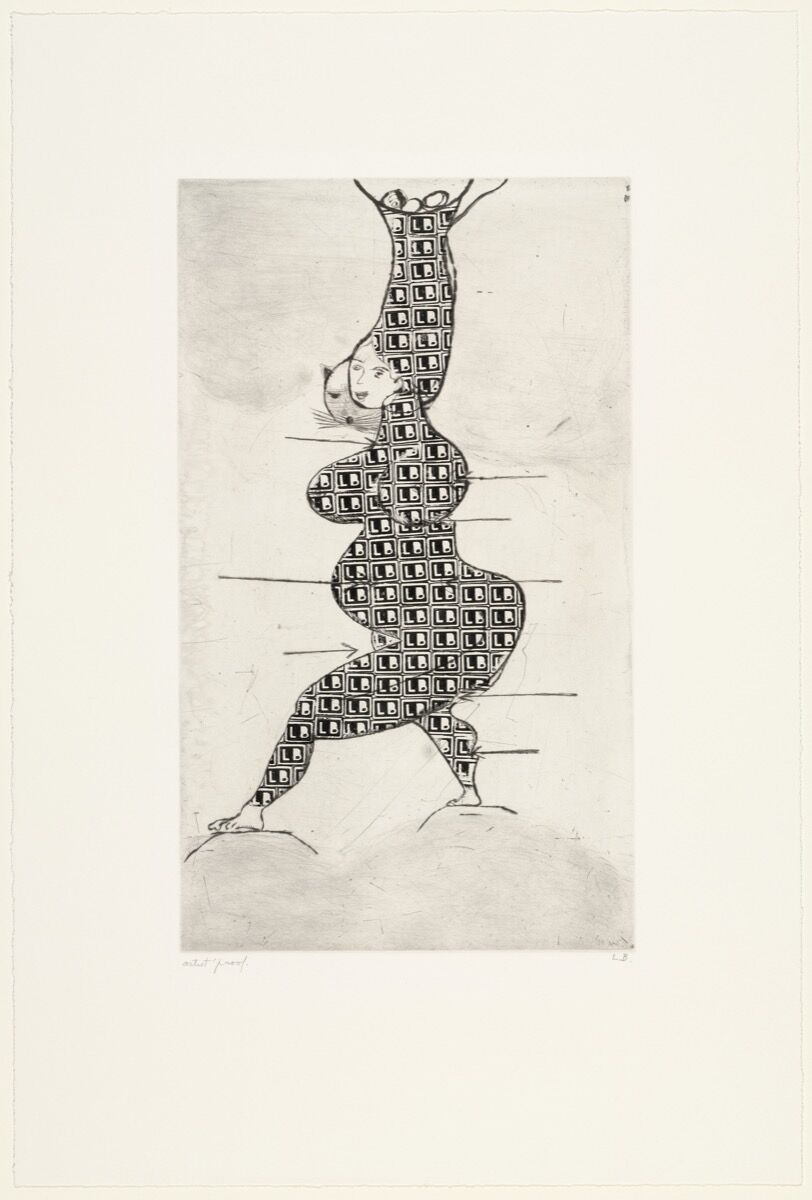 Her frequent use of music composition paper would later become an abstract backdrop to Lullaby (2006), a marvelous screenprint series of red, organic forms reminiscent of
Henri Matisse
’s cut-outs. The shapes dance on the score, animating Bourgeois’s biomorphic dreams.
Regardless of medium, Bourgeois’s work was often performative, a dramatic extension of her inner demons. Her sculptures vibrate like talismans of existential dread. But the artist’s paper works are something else. They’re playful and relatively methodical. Patterns and body parts synchronize and synthesize—manifestations not only of her anxiety, but also of her wit, and her endless inventiveness with form.
Zachary Small
Related Stories