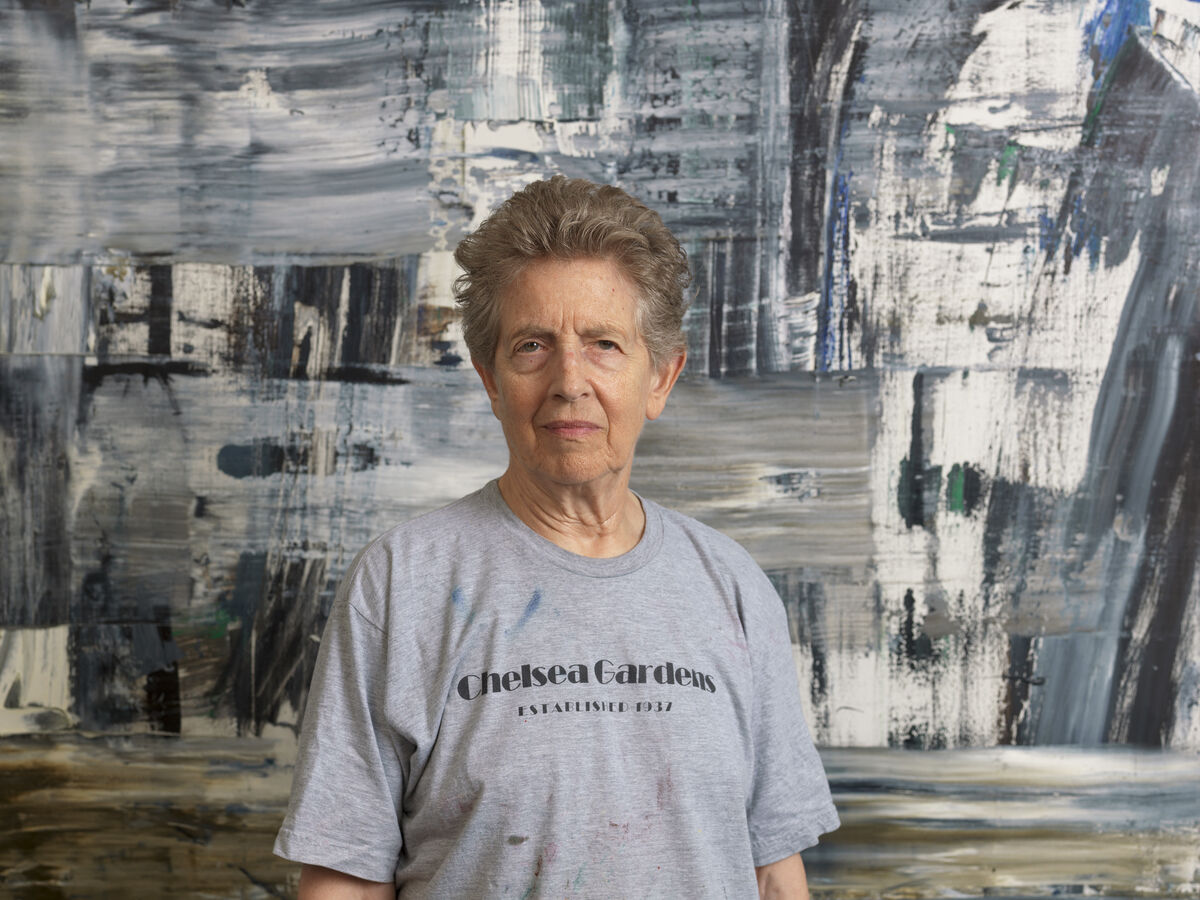 On an unseasonably warm fall day,
Louise Fishman
, a 76-year-old painter with a shock of short white hair, a fanny pack slung at her hip, and a radiant quality of openness, settled casually into a chair in the back room of Cheim & Read, her dealer since the late ’90s. She had just passed through, for the umpteenth time, her show of new paintings—surging abstractions where urgent strokes of paint explode through loose, albeit anchored, grids. With names like Credo (2015), Bel Canto (2014), and The Foot Upon the Earth (2014), Fishman’s canvases express a bursting but grounded energy—not unlike the chaotic activity that gushes through Manhattan’s grid plan. 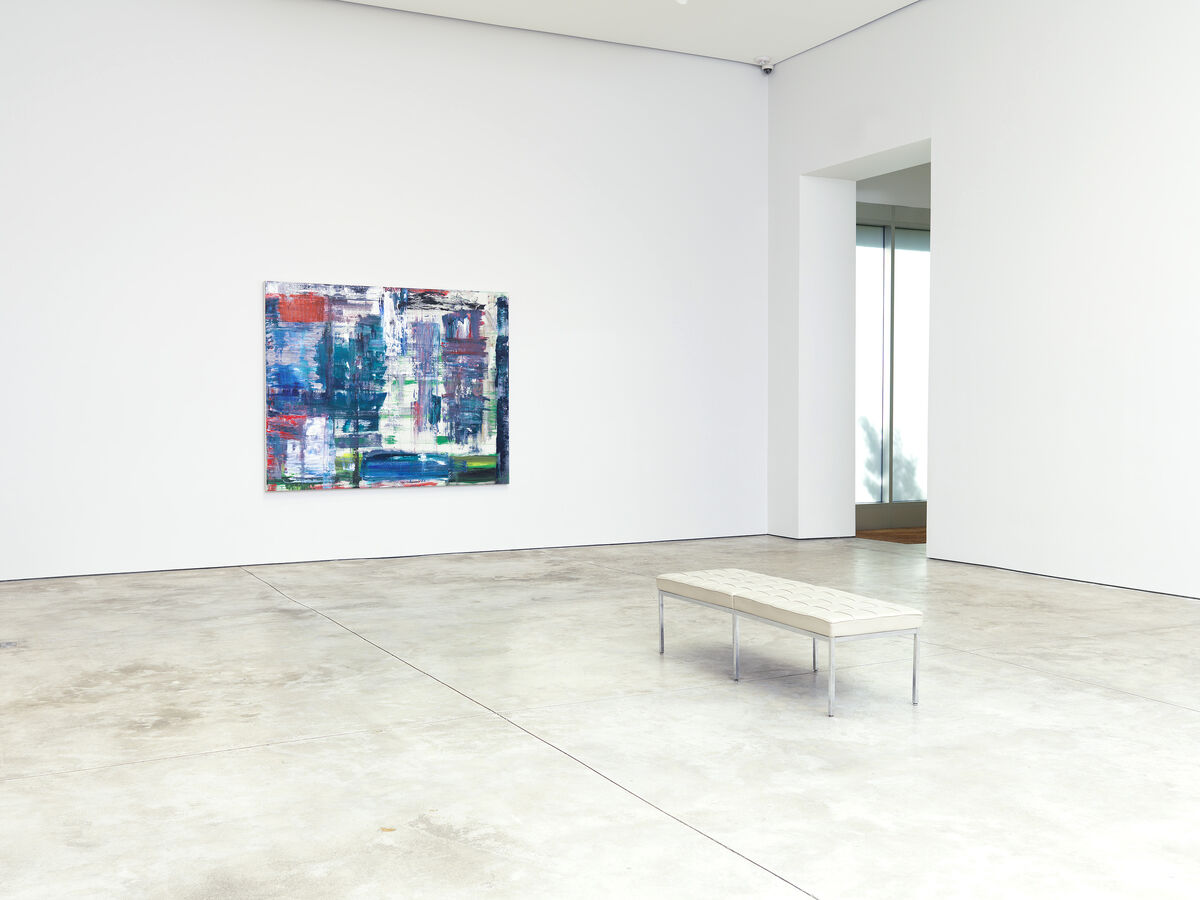 The show at Cheim & Read marks what could be seen as Fishman’s 50th anniversary as an artist. After graduating with an MFA in 1965, she promptly moved to New York, where she lived and made work in an apartment on West Broadway in SoHo, “before it was an art center; when it was still filled with factories and trucks and stuff,” she recalls. At the time, she was influenced by
Sol Lewitt
and
Al Held
, artists whittling forms down to their essential lines and, in turn, pioneering a canon-shattering approach to abstraction—
Minimalism
. Steeped in this scene, Fishman made big paintings where squares of sky blues, subdued reds, and buttery yellows were stacked into sturdy grids with soft edges. Since then, she’s pushed abstraction into countless new forms with a hungrily experimental body of work, one that’s included geometric patchwork panels, swooping oil paintings, loose watercolors, and little sculptures that each exude fluctuating tonal cadences—from lilting to loud to downright angry.
Angry was how Fishman was feeling in the late ’60s and early ’70s, when she came to the realization, while taking an art history class, “that there’s not one woman in these books,” she remembers. “
Mary Cassatt
wasn’t even there. And I thought, ‘I must be a fake, because everybody in this group of painters I was friends with were men.’ And then I thought, ‘That’s it. I’m gonna start from scratch, and I’m gonna do only what comes out of me and is not identified with a male artist.’ And so I cut up some paintings.” 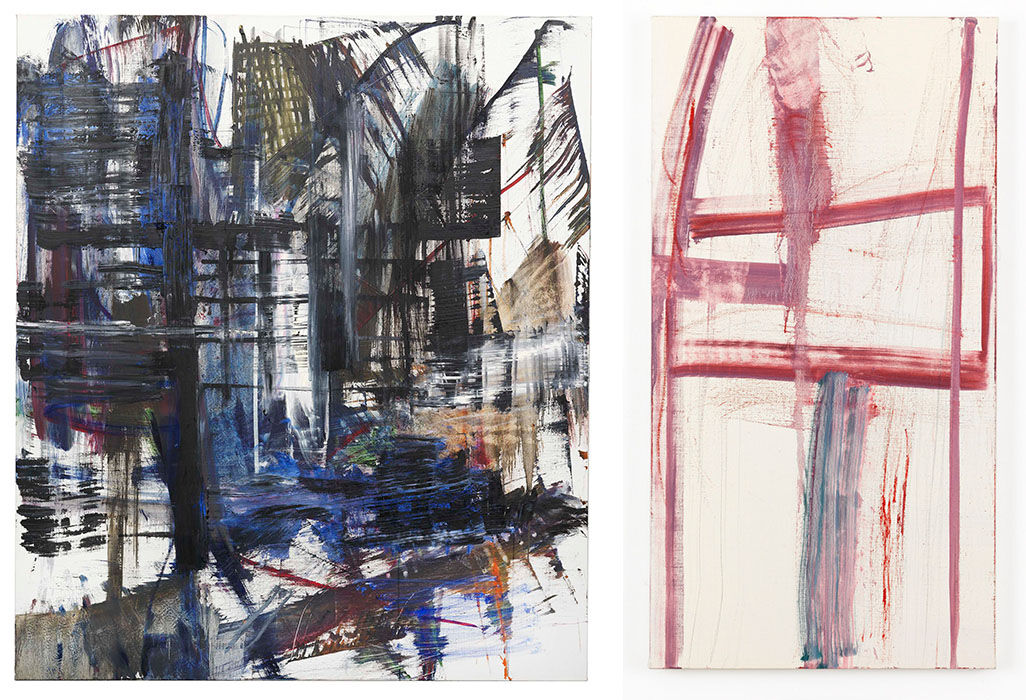 Advertisement
It was around this time that she also joined the feminist movement. A self-described “shy person,” opening up her work to the world, and to new approaches, hadn’t always come easily for Fishman. In her late teens, she forewent a burgeoning career as a pianist because, she says, “I didn’t want to be playing in front of other people. I had never stood up in front of a group, and I was desperate not to do that.” The memory is ironic now, given her easygoing gregariousness and paintings that pack in bold, forthright gestures. “I was still finding my voice,” she explains. “My work changed a lot around then, and what changed it most dramatically was being involved in the women’s movement—I found my voice there.”
Her gateway into organized feminism was a brief stint with the group Redstockings, though she quickly moved onto an even more radical cohort, W.I.T.C.H., short for Women’s International Terrorist Conspiracy from Hell, and would later become active in the New York Feminist Art Institute (NYFAI) and even organize her own group which gathered women artists. “In those groups, everyone had to speak, we were all equalized, and whatever we said couldn’t be questioned. It was testimony: here’s my experience as a woman, and as a woman artist,” she explains. 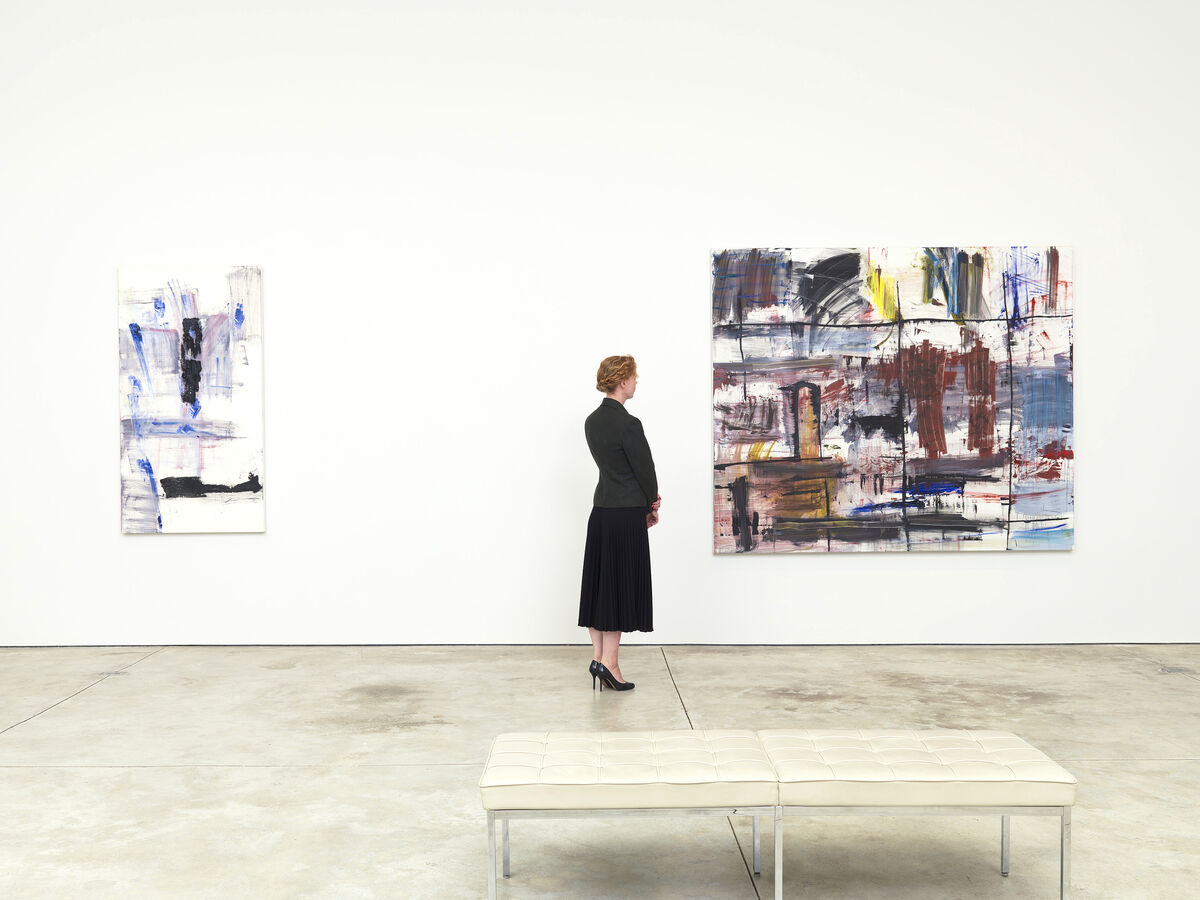 When Fishman began cutting paintings into squares and strips and sewing them back together, she was responding in large part to the fact that “all my work was influenced by men; I hadn’t yet come to
Agnes Martin
,” she explains. “And I thought, I’ve had enough of this.” While she had never been interested in women’s work—in fact, activities traditionally associated with women, like sewing and quilting, made her uncomfortable—she decided to address, head-on, those complicated feelings to see how they would inform her practice. It’s become the origin story of a body of work that is at once resolutely experimental, resolutely Fishman’s, and, at times, ardently feminist.
After making sewn works for several years, she returned to painting, infusing canvases with more overtly feminist content. And in 1973, after a second studio visit with Whitney curator Marcia Tucker, Fishman’s small, four-panel painting Victory Garden of the Amazon Queen (1972) wound up in the 1973 Whitney Biennial. Each of Fishman’s panels—where big letter V’s push in and out of turbid, drippy abstractions, rendered in olives, blues, and rusts—measured a small 14-by-13 inches. Tucker placed it next to a wall-size work by
Kenneth Noland
. 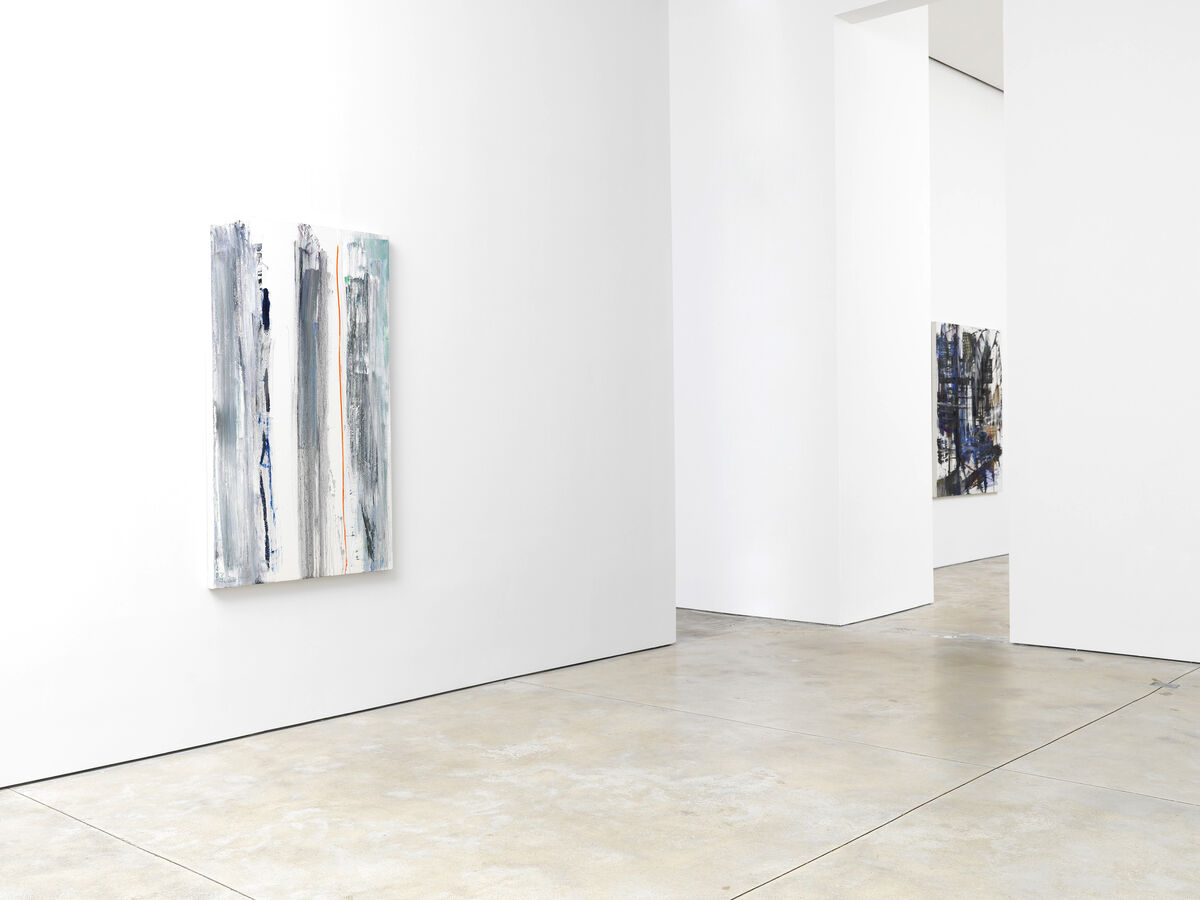 “That Noland was probably 20-feet-long,” remembers Fishman. “And my little painting really stood right up to that Noland; I was so pleased.” But she wasn’t fully appeased. In the same year, she began making her “Angry” paintings, where, over forcefully gestural backgrounds, she scrawled and scratched phrases like “Angry Marilyn” (Monroe), “Angry Yvonne ” (Rainer), and “Angry Louise”—the latter footnoted with the words “Serious Rage.” Fishman picked the series back up in 2008 with the dark, mottled, and particularly relevant—as election season hits fever pitch—Angry Hillary (2008). The works still feel (perhaps frustratingly) fresh.
As the ’70s came to a close, Fishman returned to pure abstraction—this time, however, the orderly grid that structured her early work began to flood with roiled gesture and vibrate with spontaneous, meandering lines, bursting through their once-minimalist seams. Titles and color choices alluded to content drawn from art history, personal experience, and political activism alike. The history of Jewish persecution surfaced in dark, brooding canvases like Ashkenazi (1978) and Dybbuk (1990). Her black paintings, begun in the 1990s, merged the cool orderliness of
Frank Stella
, the transcendent alignment of Martin, and the allover abandon of
Jackson Pollock
. And recently, another facet of Fishman’s inspiration bank reemerged in paintings like All Her Colors and For GGG (both 2014). 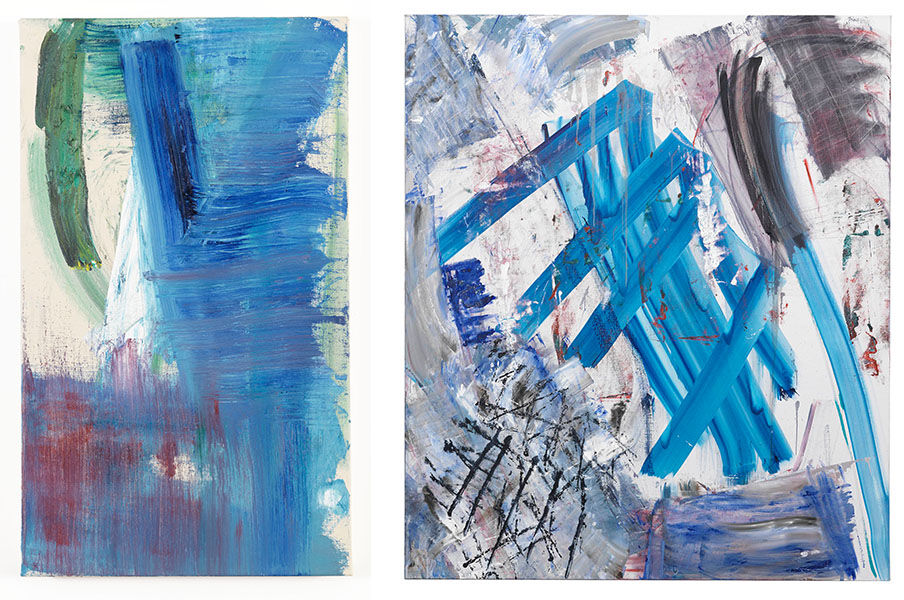 While her formal education rarely incorporated women painters, she was in fact raised by two of them—her mother and aunt, Gertrude Fisher-Fishman and Razel Kapustin, the latter who studied under Mexican muralist and political activist
David Alfaro Siqueiros
, alongside Pollock. Both painted figuratively, with Kapustin actively rebelling against her renowned
AbEx
classmate’s style. “My aunt didn’t believe in abstraction because Pollock was in her class with Siqueiros. According to her, Siqueiros used enamel way before Pollock, and Pollock just stole his ideas,” remembers Fishman, with her own rebellious glint in her eye.
It was Fisher-Fishman and Kapustin who introduced the young Fishman to art, carting her off to the Philadelphia Museum of Art and the Barnes Collection. And it was their stifled legacy—as female artists in an age when art made by women was tossed off as second-string—that Fishman waged war on, emerging victorious. The show at Cheim & Read is Fishman’s first since the passing of her mother, and leads into Fishman’s first full-fledged retrospective—a joint exhibition at the Neuberger Museum of Art and the Institute of Contemporary Art Philadelphia, slated for spring 2016—the irrefutable mark of art-world staying power. 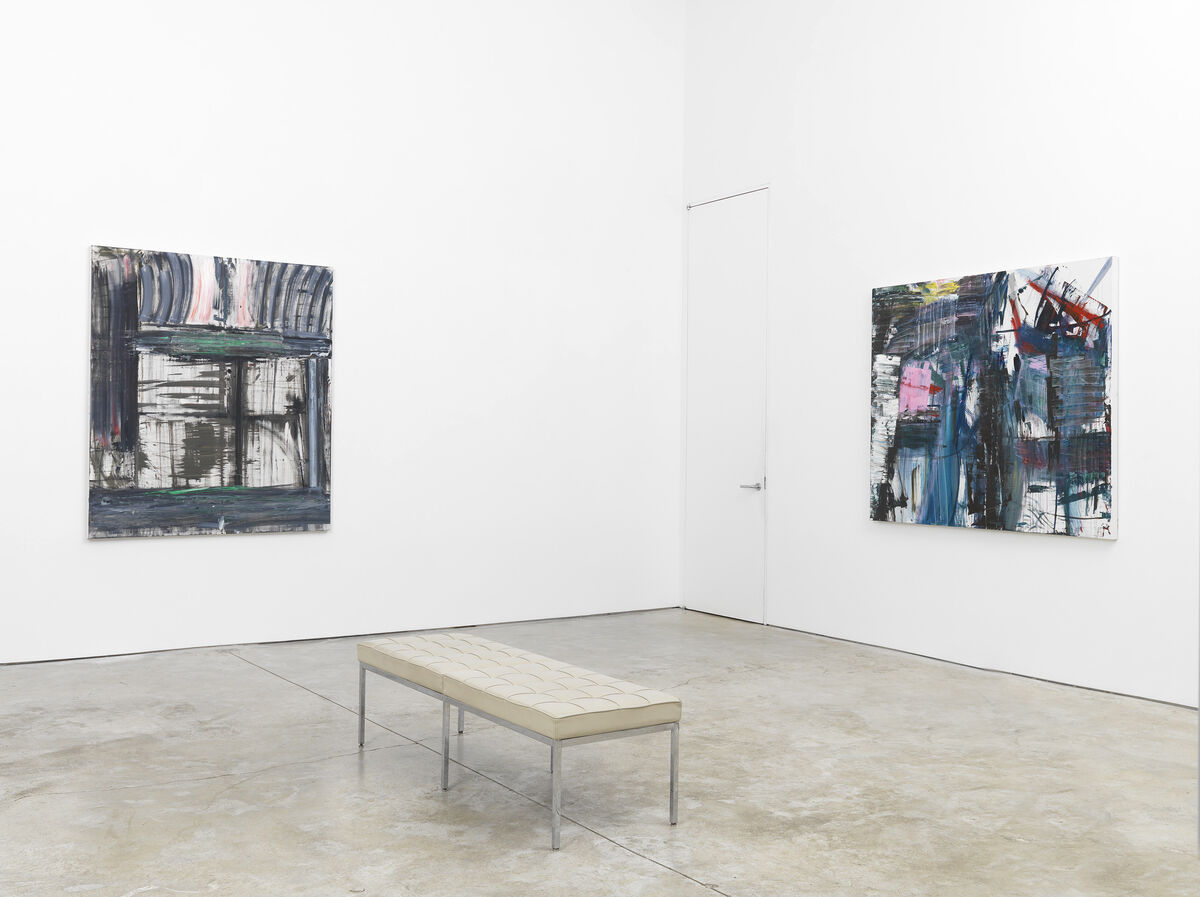 As Fishman made her most recent body of work, and as she prepares for this career-defining show, “my mother comes into my head—who she was, and who she was in my life,” Fishman says. “When I started to paint, she wasn’t happy about it because I took over a lot of what she had hoped to do, and it was hard for her.” As time passed, though, the influence became symbiotic—mother prompting daughter, and vice versa. “She even started painting abstractly, after seeing my work.”
In All Her Colors, Fishman drew from the colors her mother used, “often influenced by
Matisse
and
Renoir
,” she explains. The painting, however, layered with active strokes of yellow, mauve, green, blue, black, and large, uplifting areas of white, applied with palette knives and the occasional finger, is distinctly Fishman’s. It contains the thread that courses through her expansive body of work—an inherent dynamism siphoned from the energy of her surroundings, whether they be a room of
Titian
masterworks, the streets of New York or Venice, the resonance of a Schumann composition, or the many unsung female artists of her past.
—Alexxa Gotthardt
“Louise Fishman” is on view at Cheim & Read, New York, Oct. 22–Nov. 21, 2015.
Follow Cheim & Read on Artsy.
Related Stories