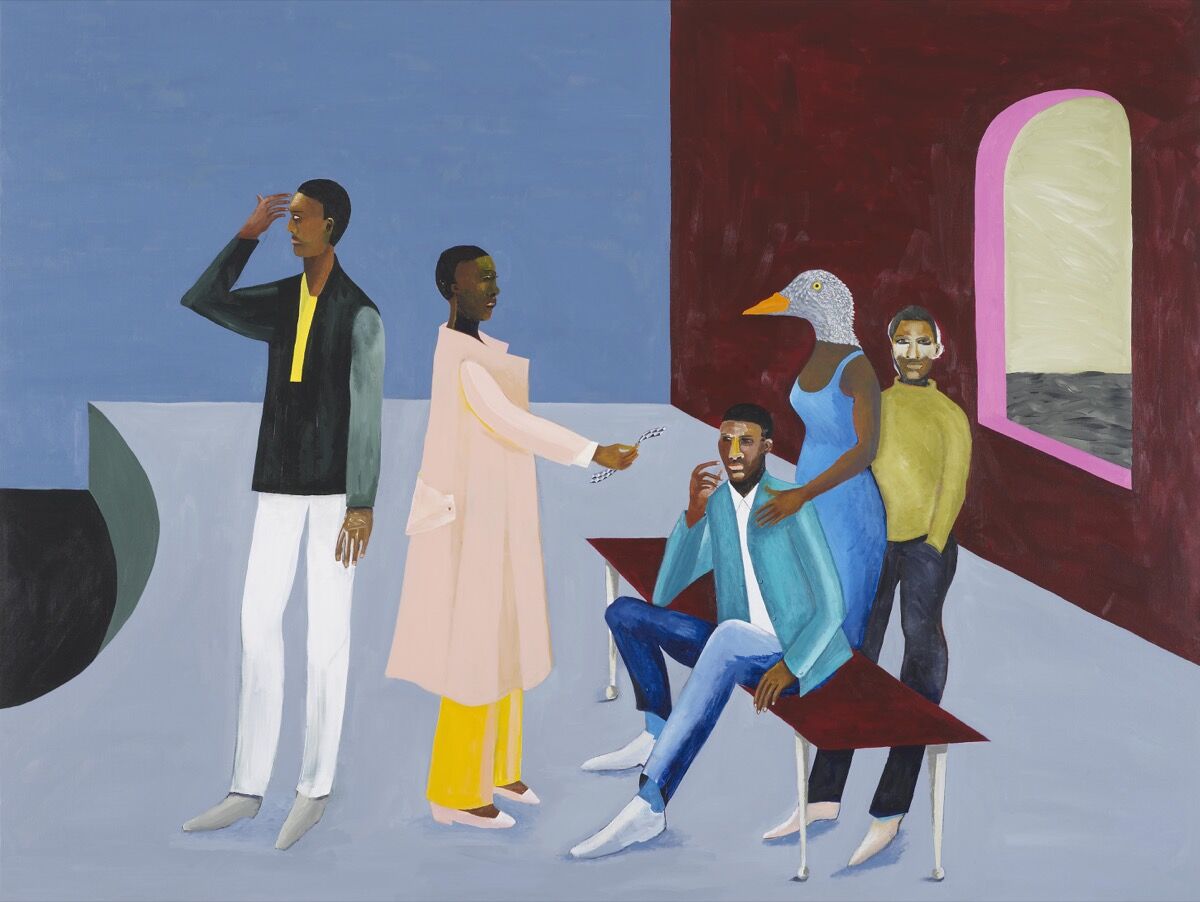 On a cold afternoon, I sat down with
Lubaina Himid
in Hollybush Gardens, a gallery in London’s Clerkenwell. The gallery has played a fundamental role in putting the 62-year-old British artist’s work on the radar. “They saw that even though 30, 40 years have gone by, there was still an energy to it, a freshness to it—or a relevance to it,” she said.
Now with concurrent solo surveys opening this week—“Invisible Strategies” at Modern Art Oxford and “Navigation Charts” at Spike Island, Bristol—Himid is having something of a moment. But with a 30-year career behind her, in which she worked at the vanguard of the Black Arts Movement in the U.K., such recognition has been a long time coming. In 1982, Himid was one of the first artists to participate in the movement. She was also a member of the Blk Art group, founded in the Midlands by artists Eddie Chambers, Marlene Smith, Keith Piper, and Donald Rodney.
Throughout the 1980s—in a political climate that finds eerie resonance with post-Brexit, anti-immigration sentiments in Britain today—Himid worked tirelessly to promote black culture not only in her work, but also through exhibitions, research, and teaching. (Alongside her art practice, she also works as a Professor of Contemporary Art at the University of Central Lancashire, Preston, and a selection of her archive will be on view at Nottingham Contemporary next month.) 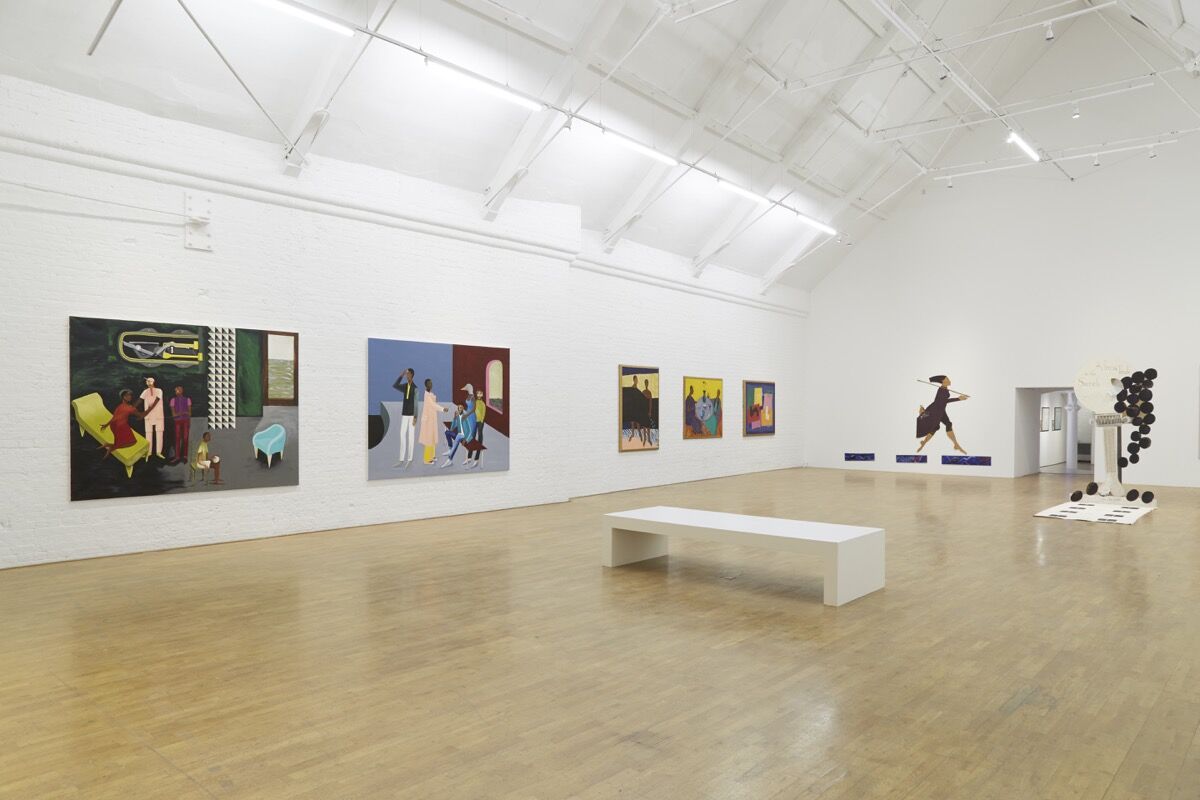 Not all black, Asian, and minority ethnic (BAME) artists are concerned with the politics of race in their work, but Himid is. From early on, she identified the importance of revising history through paintings that convey a rich tapestry of immigrant cultures and exuberantly assert the contributions of black people in Britain. “I’m absolutely concerned with expressing how we’ve shaped British culture, either by bringing in wealth via slavery, for instance, or how we’ve changed it by our very existence.”
Does Himid mind being considered a “black artist”? “I guess I’m pretty happy about it,” she said. “I think that’s what I set out to do at a time and era in the late ’70s and early ’80s when our cultural contribution was invisible, and it was absolutely necessary to make that contribution visible somehow, and that was how I chose to do it. It would be disingenuous to now say, I want to step back from that—the task’s done. Of course I want it to be seen for what it is. I want you to engage with what’s happening in the work, what it’s made from, the history of it. But it’s not divorced from who I am and how I came to make work in the first place.”
Marlene Smith, a founder of the Blk Art group, similarly recalls a time not so long ago when black artists were entirely absent from the British art establishment. Over lunch at Modern Art Oxford, she recalled wanting to write an essay on black artists at school, and her teacher telling her that she couldn’t because there weren’t any black artists. The reality of her 18-year-old daughter is quite different, she reflected. From
Frank Bowling
to
Chris Ofili
and younger artists like Evan Ifekoya and Larry Achiampong, successful black artists are present and visible in contemporary Britain. 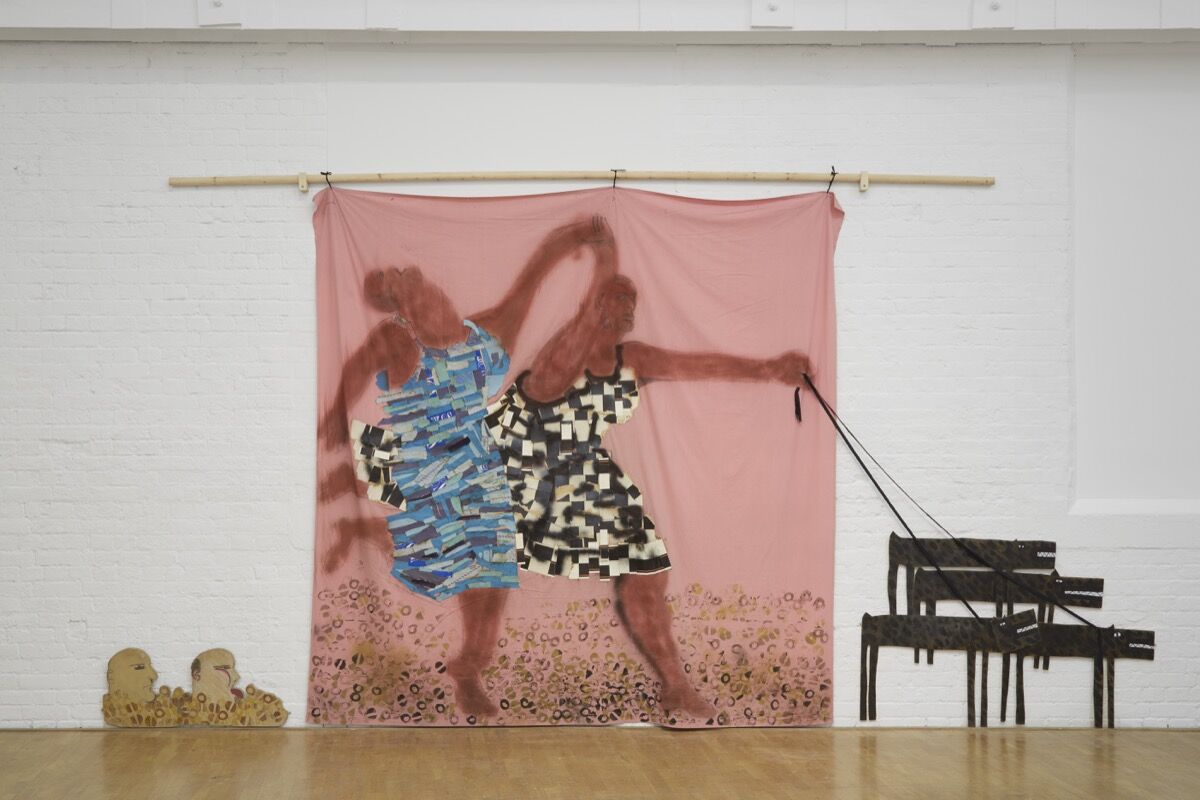 Advertisement
It is in this context that Himid is now getting exposure. But if things have improved considerably for black artists since 1982, there is still much work to be done. “It’s that real in-depth discussion of what those artists are trying to do that isn’t quite there yet,” Himid said. “We’re dealing with complex ideas and complex ways of making things, filling gaps in histories, continuing political arguments which are hard to think about as the world shifts and changes around you—those are the sort of conversations we want to engage with.”
Himid views discourse as central to her work. Her artmaking begins with conversations—with colleagues, academics, and in particular, economic historians. She often paints figural and metaphorical spaces for discussion. In works such as Plan B, Everybody Is (1999/2000) and Pool Series, Yellow (2000), for instance, which hang side by side at Modern Art Oxford, chairs face the viewer, inviting you to pull up a seat at the table. In other paintings, she depicts discussions taking place, as in Le Rodeur: Exchange (2016) or in the exchanges Himid has imagined between British cotton mill laborers in Lancashire and African-American slaves across the Atlantic in Cotton.com (2002).
Where no conversations exist, Himid creates them. In an incredibly painful work from her “Negative Positives” series (2007–2017), for example, she forces the subliminal racism of British newspapers into plain view. In Naming the Money (2004)—a large-scale installation composed of her signature “cutouts”—she invents the identities of 100 servants who were sent to Europe from Africa in the 17th century.

Himid’s approach may be discursive, but it’s also painterly. Is her chosen medium, I ventured, really an effective form of activism? “Well, it’s worked—hasn’t it? Painting works!” she responded. “Video and performance work as well, but paintings worked for hundreds of years. All sorts of ways we think about the British landscape come from paintings of the British landscape. So in order to challenge some of that, sometimes you have to paint your way into a gap.” Indeed Himid’s work has been referred to as “history painting.”
If her work has an activist bent, then how does she measure success? “What I know is that if you can create a space where audiences can bring their own story, and you’ve brought yours to that work, and there’s a conversation that takes place—years later they remember that, or two weeks later they go and do something about it.” I entered Himid’s work through my own invisible story as a part Sri Lankan woman growing up in rural England, my father the only brown person in 30 miles. I have yet to find the Sri Lankan story in public discourse, but Himid’s paintings have a galvanizing effect. I found myself discussing this absence at length while viewing the exhibitions.
Among Himid’s historical works is a new painting, part of her ongoing “Kanga” series, based on Tanzanian traditional cloth designs. These works refer to personal conversations with her lost self, the person she might have been in Zanzibar—a place too painful for her to return to until she was in her forties. One of the new kangas depicts an empty boat thrashing in a turbulent sea. A text below reads “Have Courage in the Crisis, Set Yourself Free.” 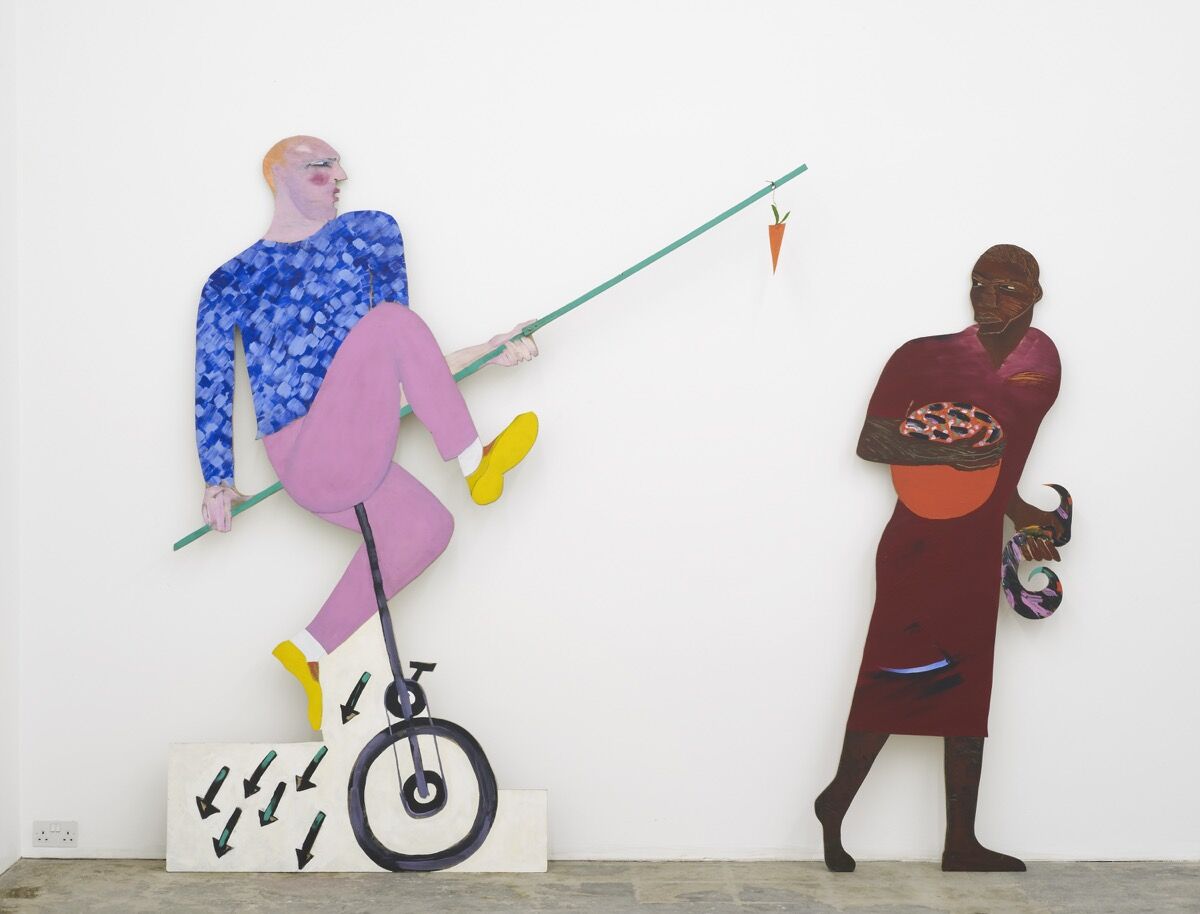 I asked Himid if she is optimistic about the future for black artists in Britain. “Oh yeah definitely, because there is an energy, there’s much less of a purposeful ignorance about what’s being done and what’s going on,” she said. “I think young people are cleverer than we were. I mean yes, we showed in small spaces, and we showed in public galleries, but I think we were waiting for approval more than artists are now.”
Charlotte Jansen
Related Stories