At the Montreal Biennial, Luc Tuymans Presents a Suite of New Paintings 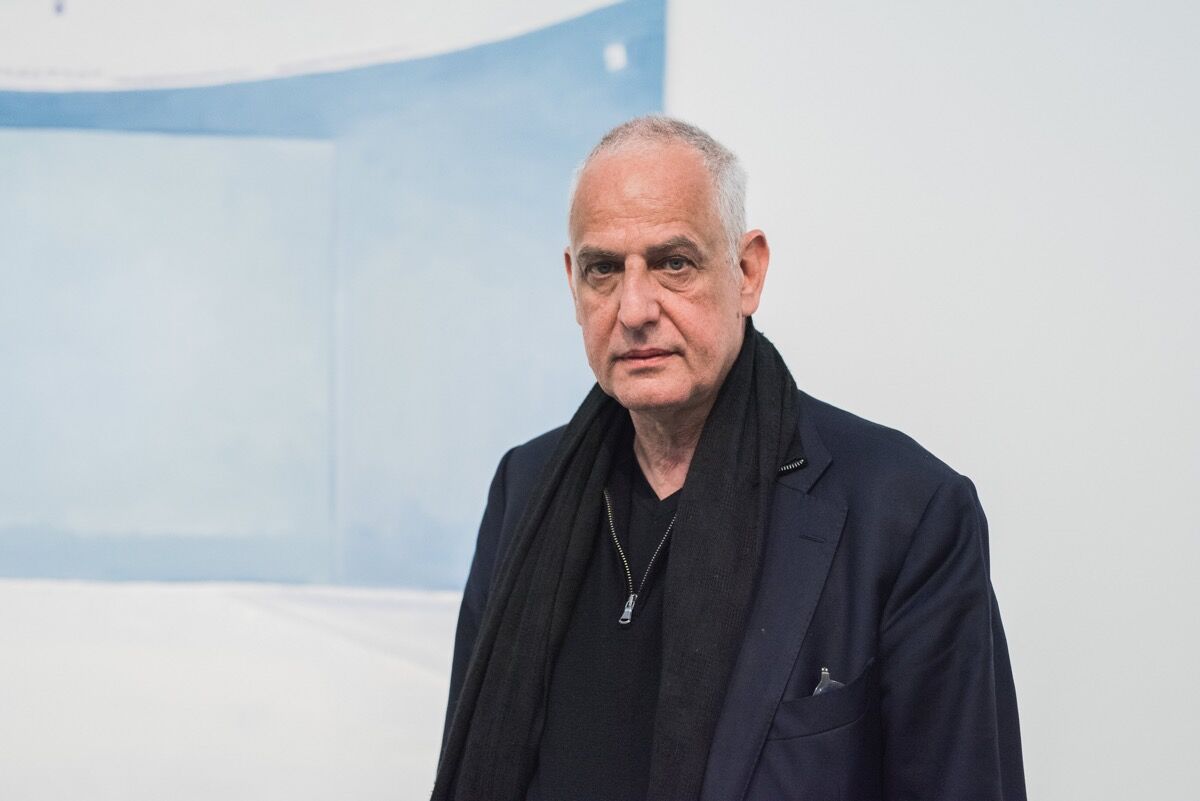 On a bright, chilly October day,
Luc Tuymans
is in Montreal for the opening of the city’s biennial, in which he’s showing a suite of paintings that are cold and cryptic, rather like the artist himself. I find him pacing, slightly hunched over and dressed head to toe in shades of black and navy blue, inside Montreal’s Musée d’Art Contemporain, where his works are hung. His dark clothes draw out his close-cut white hair and pale blue, deep-set eyes. In person, the Belgian artist is the epitome of an art-world heavyweight, thick on gravitas and seeming to embody a life’s work that is as loaded and serious as it is evasive.
The three largest works of the four he’s showing in Montreal—paintings of a bare museum space with stone blue walls and what appear to be the empty frames of compositions that once hung there—followed a typically convoluted trajectory for Tuymans. “These works came about as a little bit of an accident,” he tells me in a deep Belgian accent. He speaks a little brusquely, obscuring a consonant here or there. “I took the photos when the paintings were de-installed in the Doha show,” he says.
The paintings are traces of original images, in this case of a room in the Qatar Museums Gallery Al Riwaq in Doha, after the close of his largest show to date, “Intolerance,” in January 2016. “When I saw the open frames, I found it quite interesting, and it became very emblematic,” Tuymans says. Though he doesn’t say as much, one imagines that the frames Tuymans refers to are not literal ones, but traces in the mind’s eye of the rectangular canvases that hung there. The smaller fourth painting, on the other hand, contains a bleached image of a rabid dog, which Tuymans says originated in a sculpture he photographed on a trip to the UK. 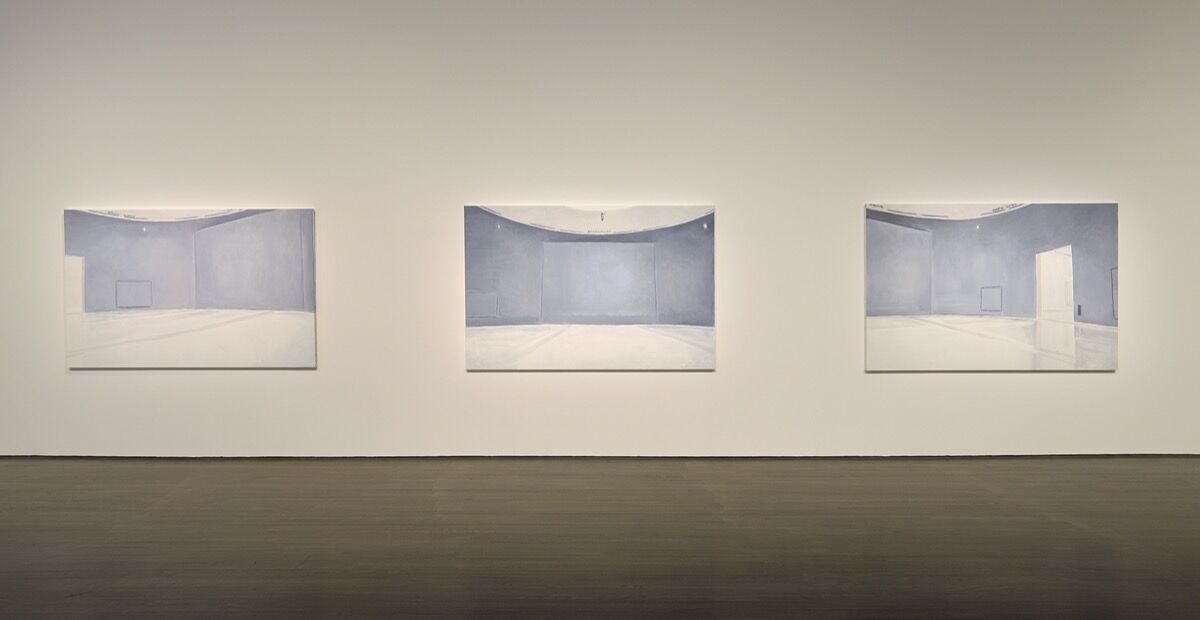 He is known for working a few steps removed from his source material, usually beginning with a photograph or a found picture that he manipulates on a computer, then re-renders as a ghostly, washed-out image on a canvas. Touching indirectly on grand themes of war, violence, and memory, Tuymans’s barely-there images convey a deep distrust with the historical record.
This muted quality fits aptly within the theme of the 2016 Montreal Biennial, curated by Philippe Pirotte, which is based on the French writer Jean Genet’s play Le Balcon (1956). Genet’s story takes place in a brothel while a revolution rages outside in a nameless city. The violence of Tuymans’s imagery also generally takes place beyond the frame—in response to the 9/11 terrorist attacks, for example, he famously painted a large, quiet still life, suspended in white space. A similar omission of violence is evident in his depictions of empty gas chambers, or faded portraits of prisoners of war.
The content of Tuymans’s biennial works is similarly elusive, the museum space depicted within them resembling a barren mausoleum. “The idea of Le Balcon, something that is staged—this is a very nihilistic point, because it’s really empty,” says Tuymans. “And this is also like a non-place,” he continues, referring to the space in his paintings. With their oblique reference to Qatar, a Muslim country with ties to Islamic extremism, the spare minimalism of Tuymans’s Doha paintings makes them appear almost like an anti-dogma—the emptiness of a prophecy, as he explains. The smaller painting of a ferocious dog, meanwhile, hints at the potential for violence within religious dogma.
The withdrawn aspect of these works is accentuated in the Montreal museum, as they sit opposite those of Nigerian, L.A.-based artist
Njideka Akunyili Crosby
, whose portraits of individuals are composed of collaged material. Her figures are composites—containers of projected information and narrative content, expressions of identity as overdetermined by our media culture. Tuymans’s work, by contrast, is absent of content or figures. “I made Philippe put that work in the space, because I think it reverberates very well,” says Tuymans of Akunyili Crosby’s painting, “and in that sense the work I’ve made is sort of an antidote to the—I won’t say baroque, but overly informed work.”

Advertisement
In today’s clamorous, information-saturated environment, the insidious calm of Tuymans’s paintings makes them something of an outlier. And the position of his chosen medium is equally tenuous. What role can painting play in the digital age? The artist has described the painted canvas as an anachronism before, and he confirms this claim. “That’s exactly the role that it plays,” he says, “because painting is its own time, through time, with time. Very physical, untraceable, very difficult to memorize.”
At a panel a few nights earlier, when Tuymans sat across from
Kerry James Marshall
, another titan of the painted medium, he remarked, “There’s no point going up against social media, because you will lose. You need to bring it into your toolbox.” With the internet at his fingertips, the source material available to Tuymans has expanded considerably, but it has also become more challenging to select a compelling image. “That is always the difficulty,” he says, “but I’m very lucky, because in my career I’ve never had painter’s block. And sometimes the things you are looking for are right next to you. Especially in my case, because I work from reference. I have to know what it’s about—that it has a signifier.”
Now, Tuymans is looking for his next image, a process that can take months. “Once the choice of the images is there, they’re going to be revived in painting. So that’s the point where I don’t want to think anymore, so I want to shift my brain to the intelligence of my hands,” he explains. “The first few hours of that are horror, because although I’ve been doing this for 35 years, and I know what I’m doing, it still is horror. But then you can see if you’ve succeeded or not. When that moment arrives, the pleasure sets in.”
What, I ask, might his next subject be? “At the moment I am searching, the computer is searching,” he says. “But for sure, it will have to do with violence.” On the stage with Marshall the previous night, Tuymans had skirted around the question of why he gravitates toward the subject of human violence. “Violence has bigger consequences,” he said. But perhaps his response to a question from the audience was the most telling. Is there an absolute reality? “Yes,” he said. “Death.”
Tess Thackara
Related Stories