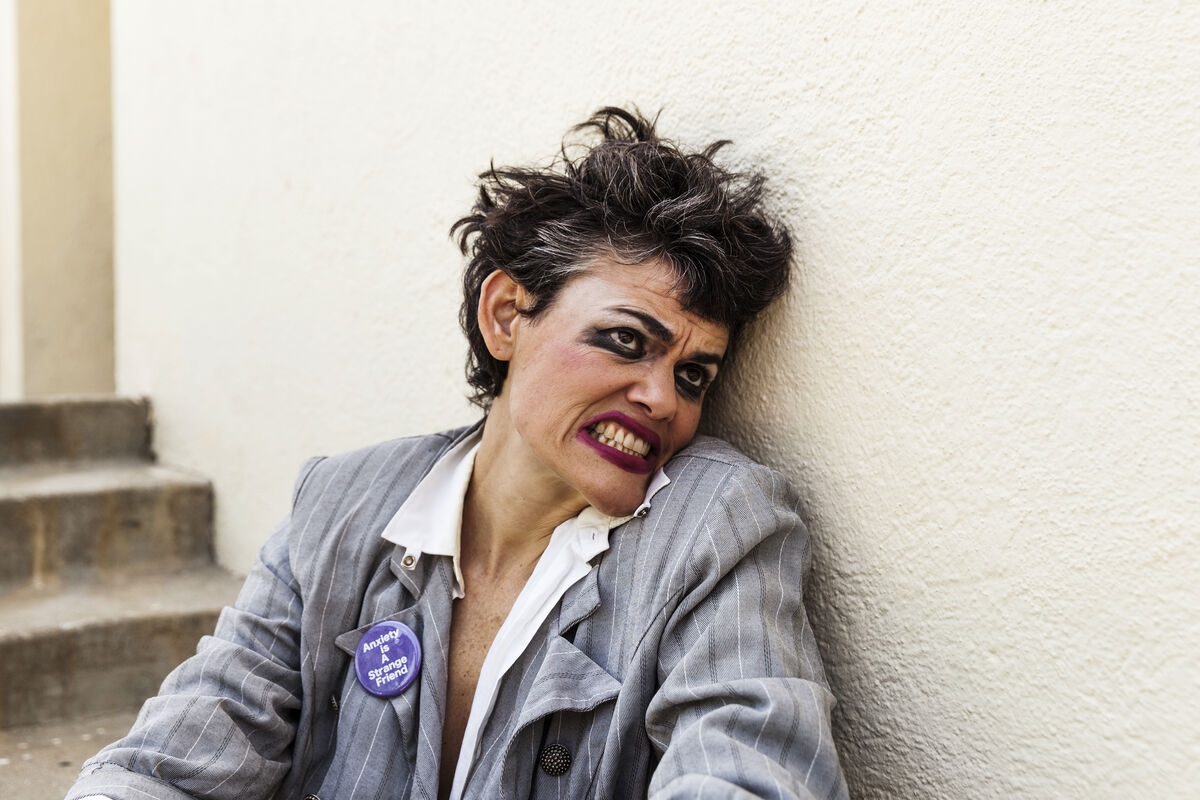 Dynasty Handbag is a performer you won’t easily forget. She is visually striking, typically wearing outlandish outfits onstage, such as a black spandex swimsuit or a vintage long-sleeved shirt and transparent tights tucked into oversized, gold granny panties. Her makeup consists of heavy swathes of blush, thick lashings of eye shadow, and an abundance of red lipstick slathered over her mouth. The personas she assumes during performances, which are usually staged in alternative theaters, storefronts, comedy venues, art galleries, or restaurants with built-in stages—like El Cid in Los Angeles, where her current monthly show “Weirdo Night!” takes place—are as campy and abject as characters in
John Waters
films.
In one such recent performance at El Cid, Dynasty Handbag strode onstage, explained to the audience that her parents were both dead and the two trunks at the front of the stage were actually coffins, and then proceeded to whip out her laptop and talk through a collection of film clips of men dressed in women’s drag, sending them up for gesturing at “subversion.” In a performance of her new song, “I Can’t Stop Thinking ’Bout Having Sex With You Girl,” Dynasty parodies the New Country song “Cruise” by Florida Georgia Line (more on that later), passionately belting out the lyrics in her purple underwear. Dynasty Handbag isn’t a woman on the brink of a nervous breakdown, however, but a character with no social boundaries or proper etiquette. Dynasty says whatever she wants to whomever she wants, whenever she wants. L.A.-based artist and actor Jibz Cameron created Dynasty as an alter ego over 10 years ago, long before she moved back to the West Coast from New York. She first became known as a performance artist in San Francisco, and then in New York, where she’s performed at venues from the Kitchen to the New Museum. She has also taken to the stage at festivals like #QUEERFAIL. Her cult following spans members of the art world establishment, the experimental performance art scene, and queer communities.
This broad appeal is perhaps due to the ways she openly discusses “bad” feelings, such as anger, sadness, and depression, but does so through the use of humor, camp, and other modes of exaggeration, employing her extraordinarily expressive, elastic facial expressions. Her critical, honest take on the world around her is easily relatable to many queer and marginalized people, or really to anyone who has struggled in life. I caught up with Cameron over the phone on a sunny morning in Los Angeles, ahead of her upcoming performance presented by The Broad.

Jibz Cameron: I come from an experimental music scene and performance art background. When I first started performing as Dynasty Handbag, I was mostly opening for bands. It was a music-based project, but it was very performative and had a lot of interruptions of disembodied voices and disassociated, fragmented thoughts, and other things going on while I was on stage. It was about this larger concept of a failed woman—a sad, divorced funeral-goer from Miami or something. She was highly dressed-up, and a failure at womanhood.

In The Queer Art of Failure, Judith Halberstam discusses the way in which “lowbrow” forms of art, such as kitsch, mass media, and popular culture—all of which are at play in your work—risk not being taken seriously in the same way “highbrow” art or culture is. How do you think about failure in relation to life, art, and queerness?

I don’t set out to fail. But I do think that most people in the world are destined to fail at our impossible structure we’ve set up for what “success” means. It sounds a little cliché to say: “We can’t fit into society’s mold!” But most people don’t, really, all the way. I’ve never really wanted to fit into society’s mold, but I feel that it’s kind of like a joke that everyone is in on.
It’s like that Leonard Cohen song “Everybody Knows”—everybody knows that this is a rigged game. I feel like I’m trying to call attention to it, talk about my feelings, and celebrate it with levity, if I can. I’m also trying to just have fun embodying all these different things that I don’t get to do in normal civilian life, or I’m not comfortable doing, or it would be dangerous to do. Your song “I Can’t Stop Thinking ’Bout Having Sex With You Girl,” which sends up country music, is hilarious. What’s the story behind it? Is it a one-off, or part of an album?

That song has a story behind it, which is strange because it’s so dumb. My current sweetheart and I bonded early on about loving “Nashville,” and having this sort of crush on New Country and on Connie Britton, of course. The first song on one of the obligatory mixes we made for each other was called “Cruise” by Florida Georgia Line, and it was a total curveball.
I thought it would be a romantic, ’70s Irish folk song. But it was this totally hardcore New Country song, like “Yeah, when I first saw that bikini top on her / She’s poppin’ right out of the South Georgia water,” but it was so sweet and cute. It was sincere. Then I got really into it. I got a karaoke version of that song, and then made “I Can’t Stop Thinking ’Bout Having Sex With You Girl.” I was falling in love. You know, it was that sweet pain of being in fear but being really excited, too.

How’s it going remounting Soggy Glasses, A Homo’s Odyssey at REDCAT, in L.A., as part of The Broad’s public programming? I know it made its worldwide premiere at the Brooklyn Academy of Music last year.

I’m really excited about it. I have never done a really involved evening of performance in L.A. before, in a proper theater. The show is largely a film that plays behind me as I act along with it. It’s me and a cartoon, and it’s very silly. I take this journey through my body, with all these weird animals that live in there and guide me. I go to an artist colony in my intestines. My co-director/dramaturg Sacha Yanow is flying out from New York, and so is my technical director Serena Wong.

Do you have any future projects in the works?

Hopefully I’ll sell my TV show and make a bazillion dollars. Amanda Verwey is my writing partner for a TV series that I am trying to sell; Jack Black is my producer and Hollywood shepherd. I’ll continue to write live stuff, and perform live, because that’s the real gold, but doing TV is something I think would be really interesting and fun, and probably horrible, too.